0 0
Local food is disappearing from Memphis menus, but Rose Creek Farms in Selmer is one of a few local farms still selling to Memphis restaurants 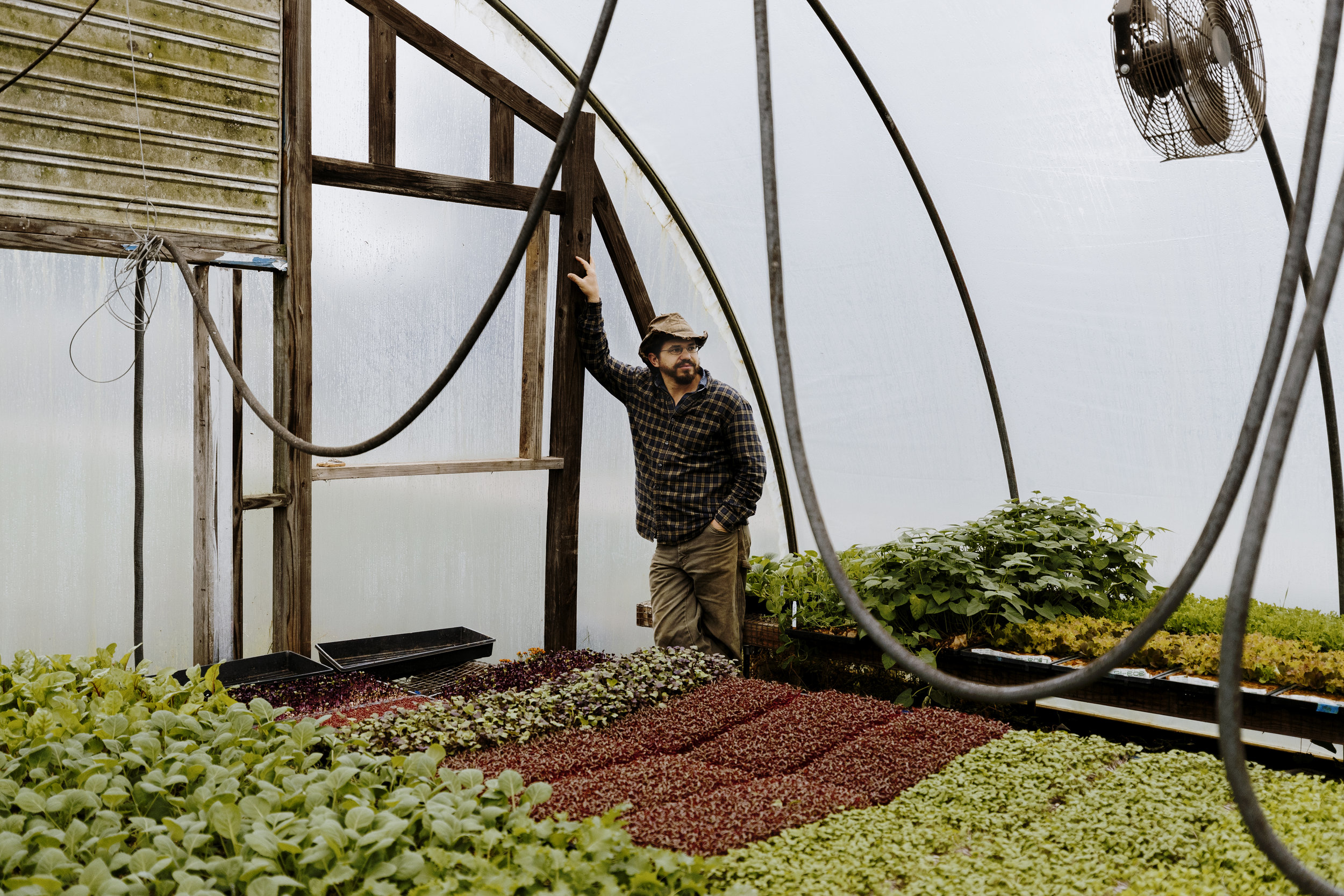 Located about 100 miles east of Memphis, Rose Creek Farms in Selmer, Tennessee, sits on one acre of land dotted with clear hoop houses and row after row of lettuce—about 50 varieties—and various other greens and root vegetables.

Overlooking the farm sits a 35-foot, two-story solar yurt, complete with a wooden deck, that Ray and Ashley Tyler and their six children call home. 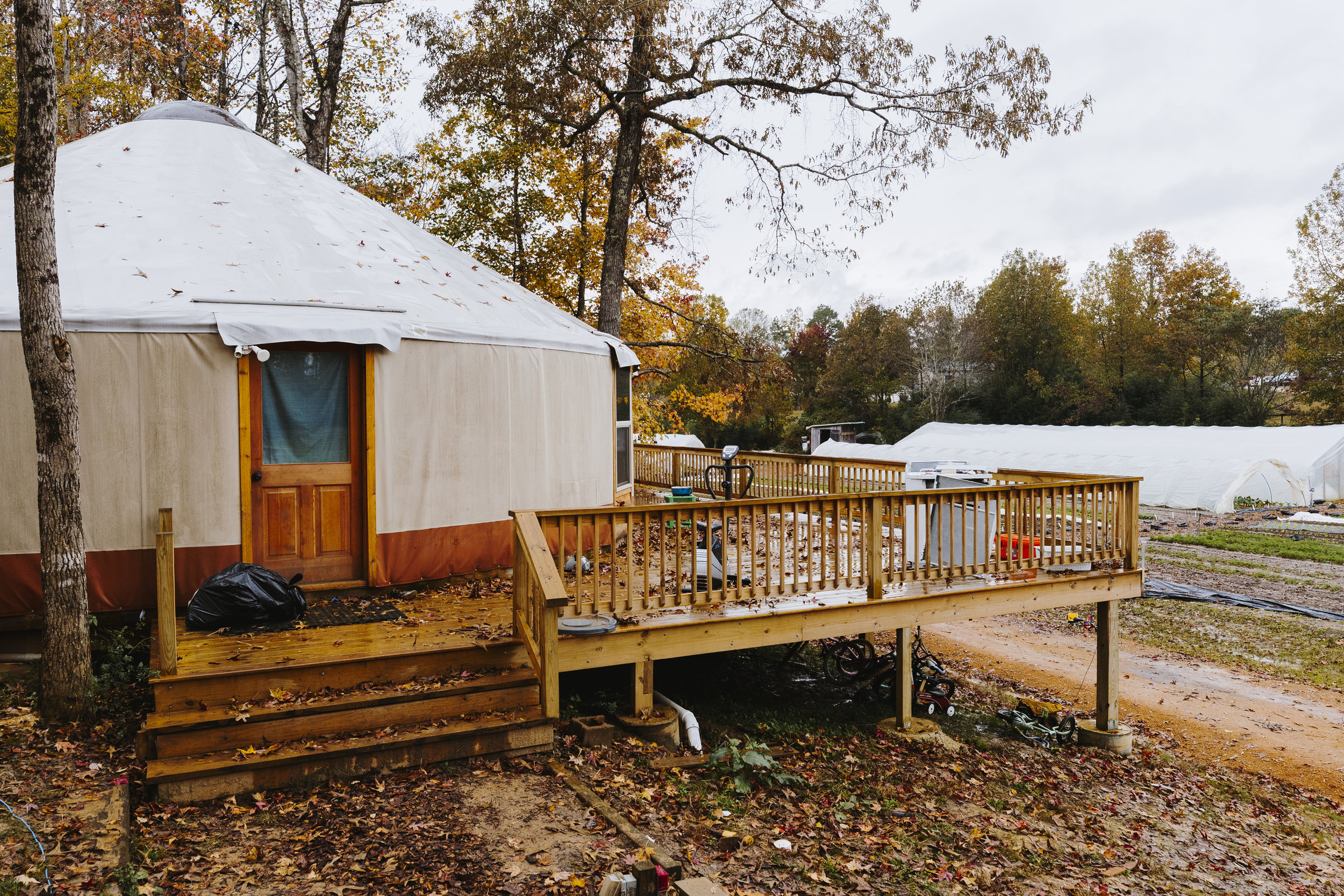 “We built that last winter,” says Tyler, a youthful, bearded farmer sporting a rugged outback-style hat and plaid button-up shirt. “We just signed a 50-year lease on our property. Our whole family lives there. We’re not off the grid. We have a dishwasher and AC. We’re normal people.”

Tyler chuckles and retracts that statement slightly: “Well, not normal. But we enjoy the normal luxuries of life.” 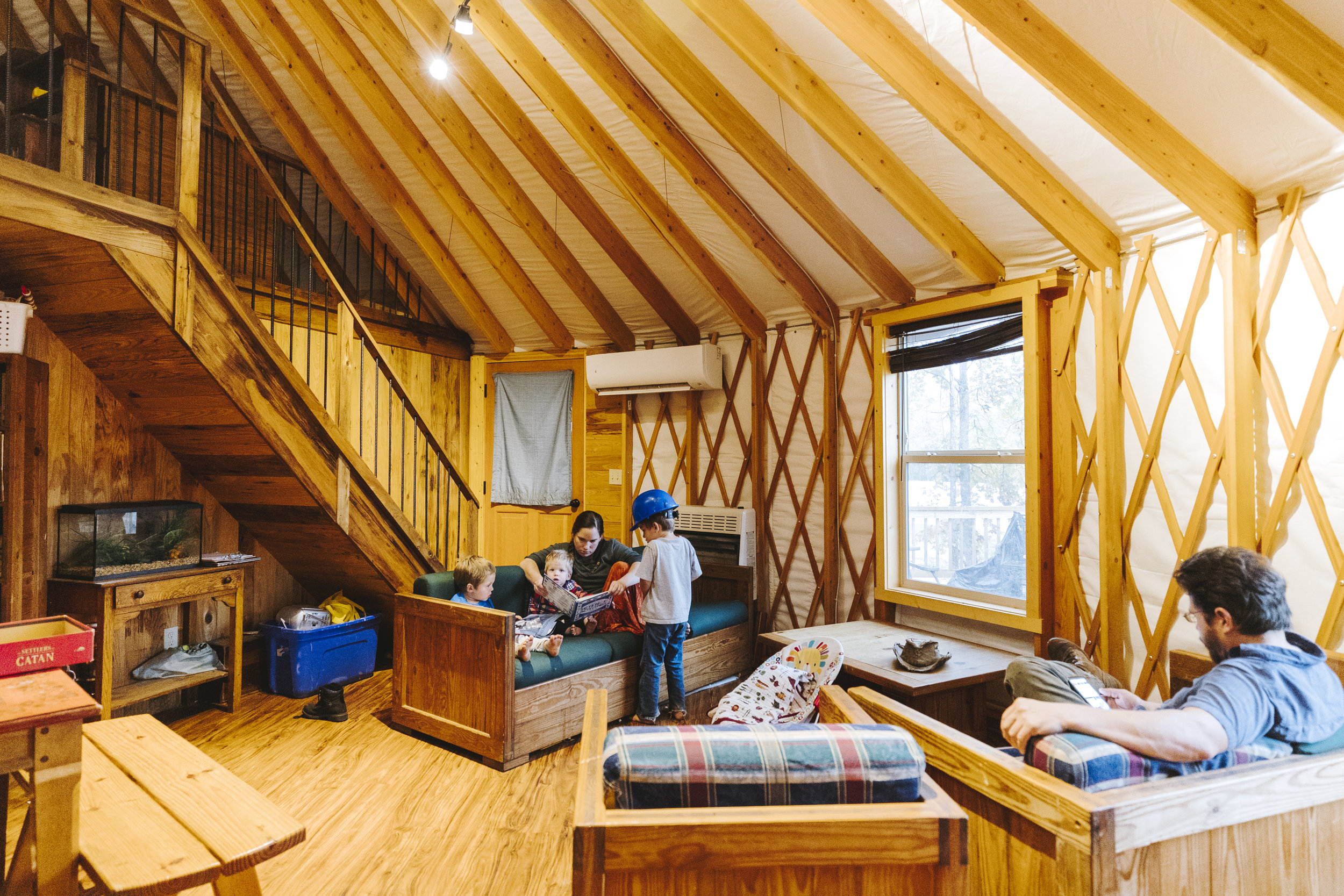 According to Tyler, this farm, nearly two hours away from the Bluff City, is one of the few local and regional farms still supplying produce to Memphis restaurants.

“There are 800 restaurants in the Memphis area. That’s a tremendous amount. There should be dozens and dozens of farmers serving those restaurants, but there’s not,” Tyler says. “In the winter of 2018, I was told I was the only farmer delivering to Memphis. And it’s been a hard sell for me lately. I’ve never tried to sell so hard in my life, so I was shocked to hear that.”

He says he knows of a couple of other farms selling locally, so he isn’t sure that’s entirely factual, but he says it’s safe to assume he’s one of few.

“When I started coming to Memphis to sell eight years ago, it was a completely different scene. This city was huge with local food, especially in restaurants. That’s changed a good bit, but we still have chefs who are calling us,” Tyler says. 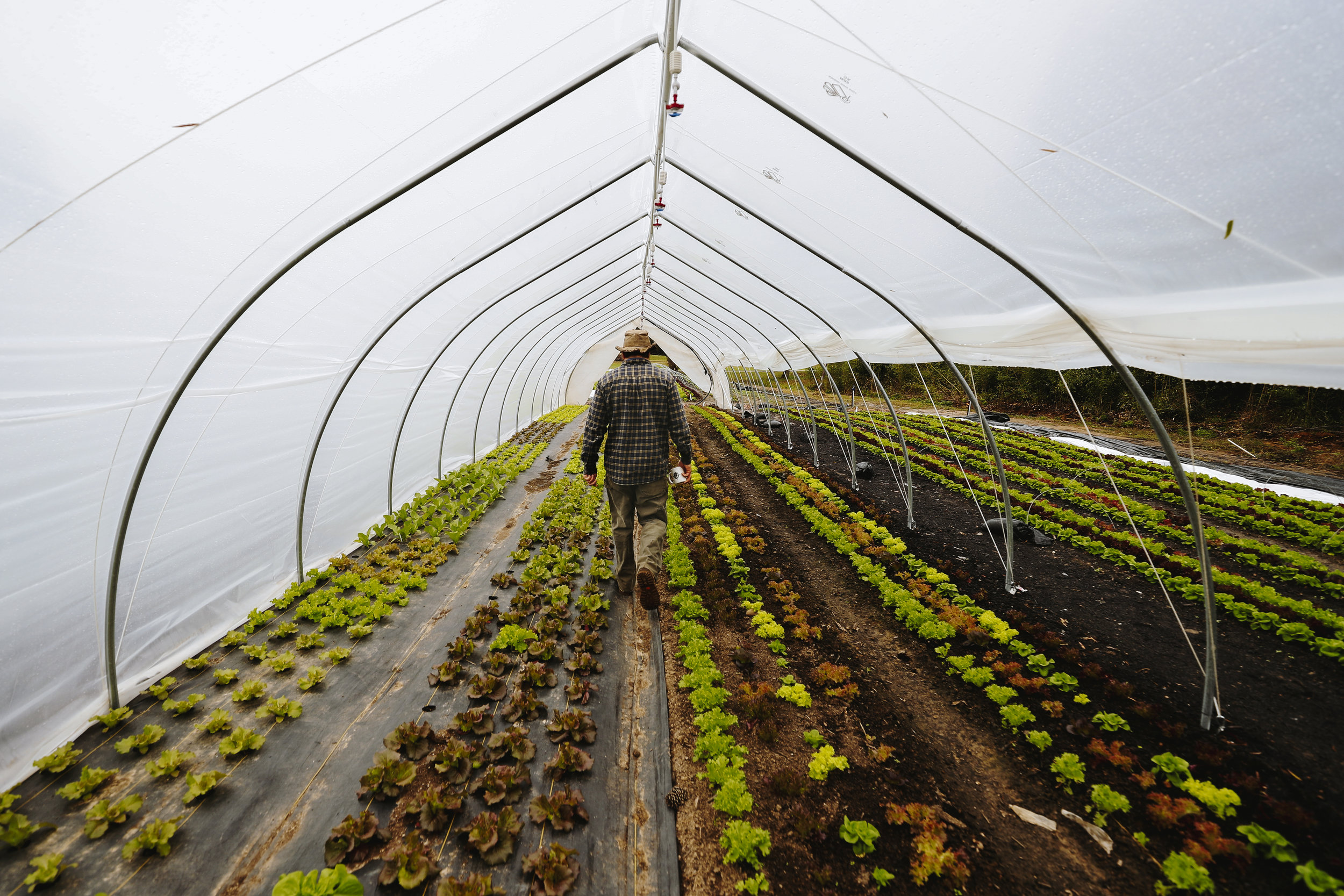 A first generation farmer, Tyler and his family have only been in the business since 2009. He previously worked carpentry and welding jobs in Memphis, making the nearly four-hour commute daily. But when Ashley was pregnant with their first child in 2009, she expressed an interest in having a small garden so she could put up canned goods and salsas for the winter.

“I would come home after the welding job and work in the garden from 4:30 to 7 p.m. I got to watch the sun set and get my hands in the dirt. The weeds were taller than I was, but there’s something about that connection with the soil that made us pause. 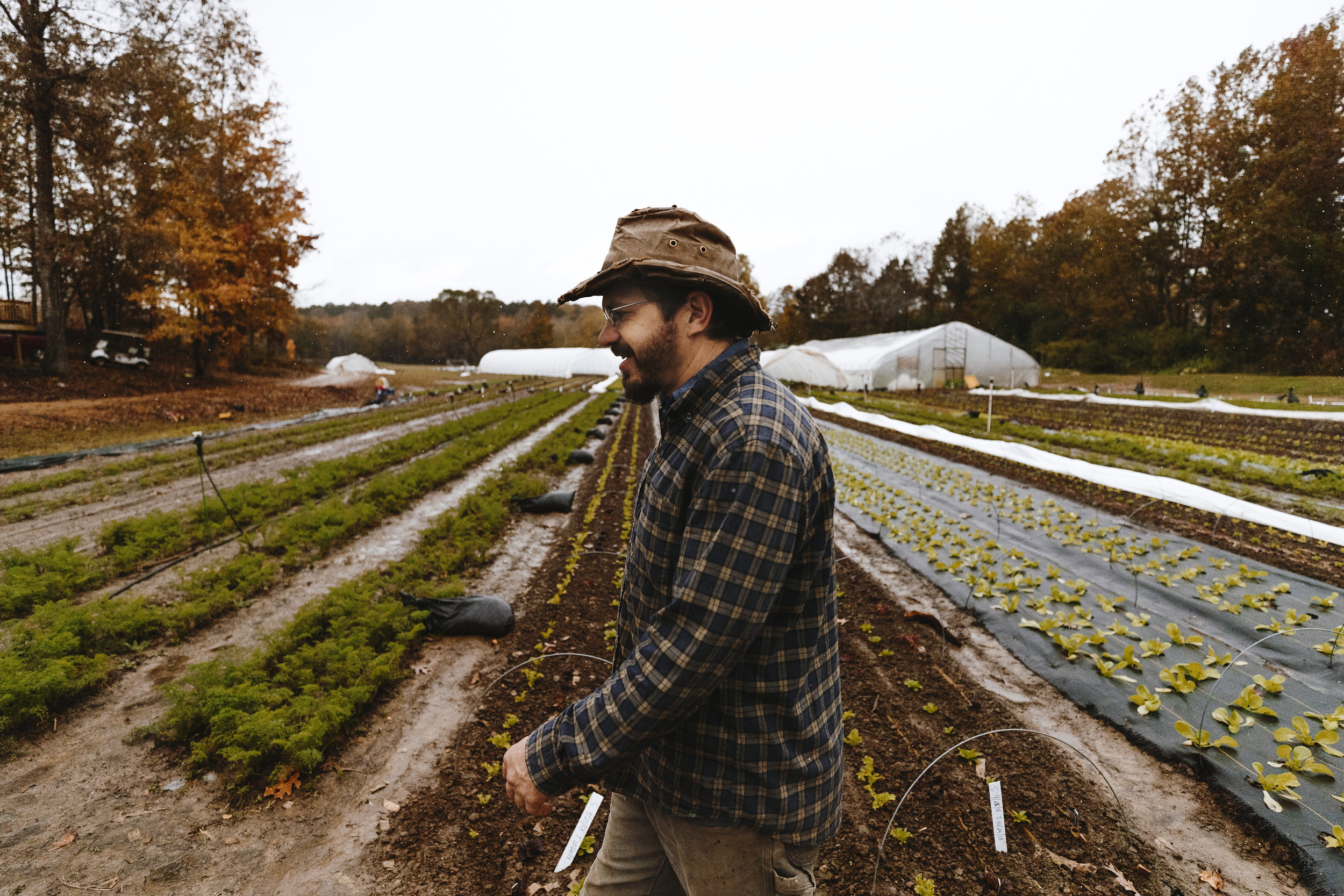 The act of planting the seed, nurturing it and watching it grow, and then feeding my family was very rewarding.

It was very unlike going to a factory and being around hard, cold steel. The magic of the garden, I just loved it.”

What started as a hobby eventually grew into a profession when Tyler was laid off from that welding job in 2009 and then laid off from a land maintenance job a couple of years later in 2012.

“My wife and I sat down and decided we were going to do this. We knew we’d pay a cost. We would be broke. While our friends were buying new cars and going to Disneyland, we would be home putting in the work. We did a lot of soul searching, and together we went,

‘Yes, this is the life we want. This is the occupation we want our family to be brought up in.’” 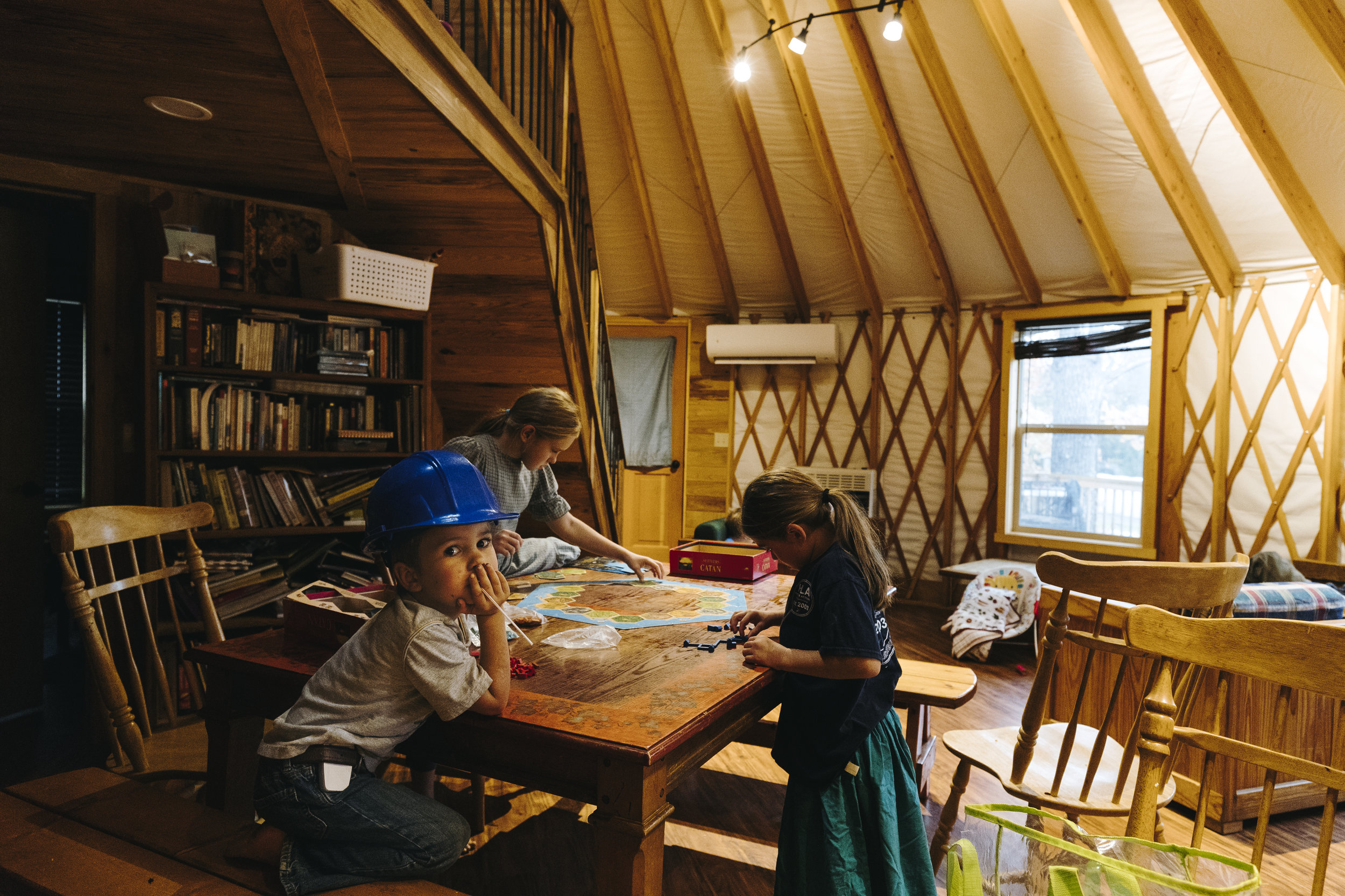 Rose Creek Farms went through several major changes over the years. They grew to include livestock, and by 2015 they were slaughtering 50 to 60 hogs per year and several thousand chickens and turkeys. They had two acres and a tractor at that point.

“But everything we were doing, we were doing terribly and at a major cost. We had three children by then,” Tyler says.

After their oldest daughter was diagnosed with stage four cancer in the summer of 2015 (she’s fully recovered now), the family changed their diets and stopped eating pork.

They started relying more heavily on produce, and they soon found themselves turned off by the animal agriculture side of their business. 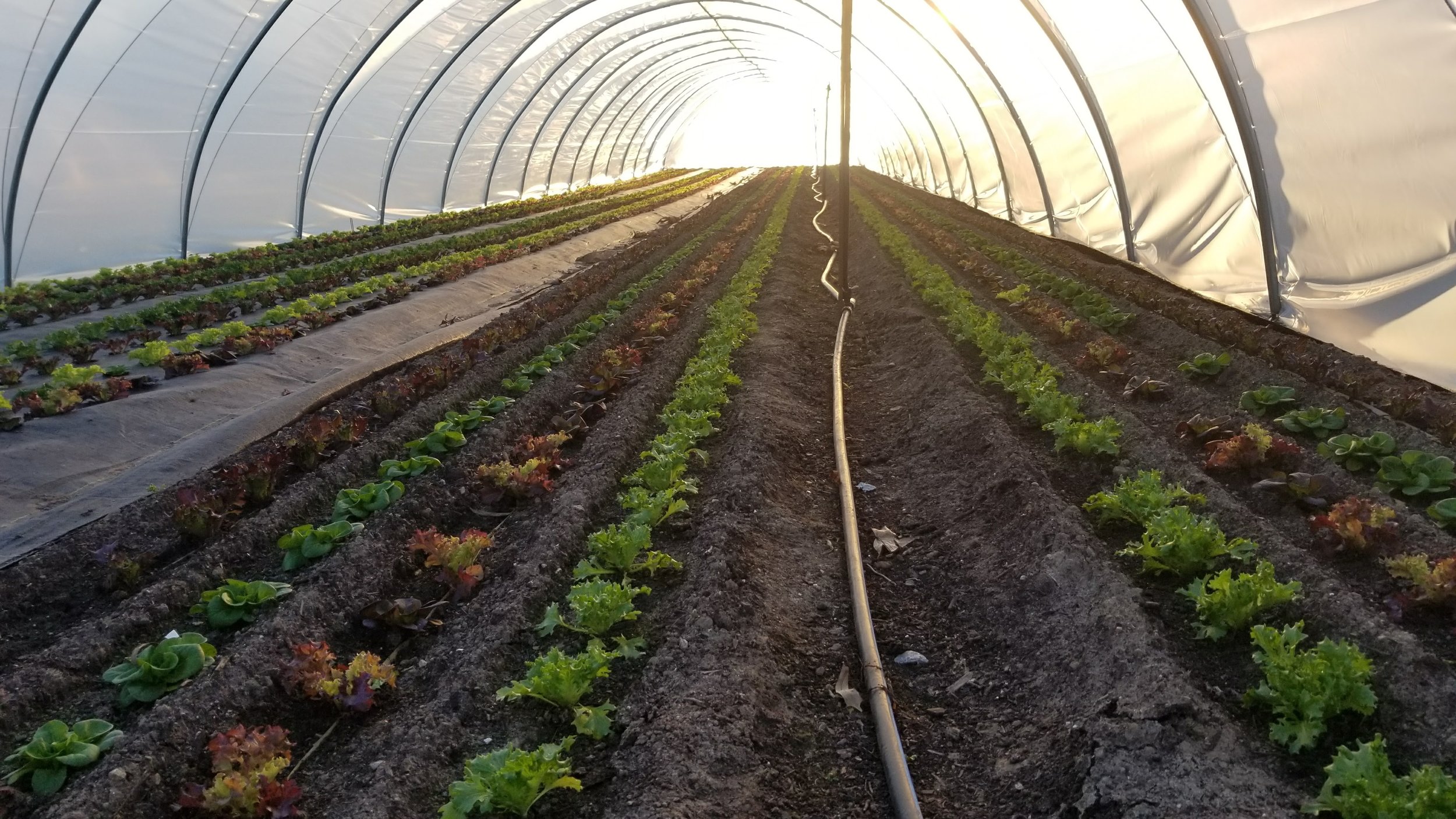 “Why grow food that we’re not going to eat? That’s the whole point of farming is to first feed your family,” Tyler says.

They made the decision to sell off their livestock and their tractor and cut the farm back to one acre with a focus on growing many varieties of lettuce and other greens. 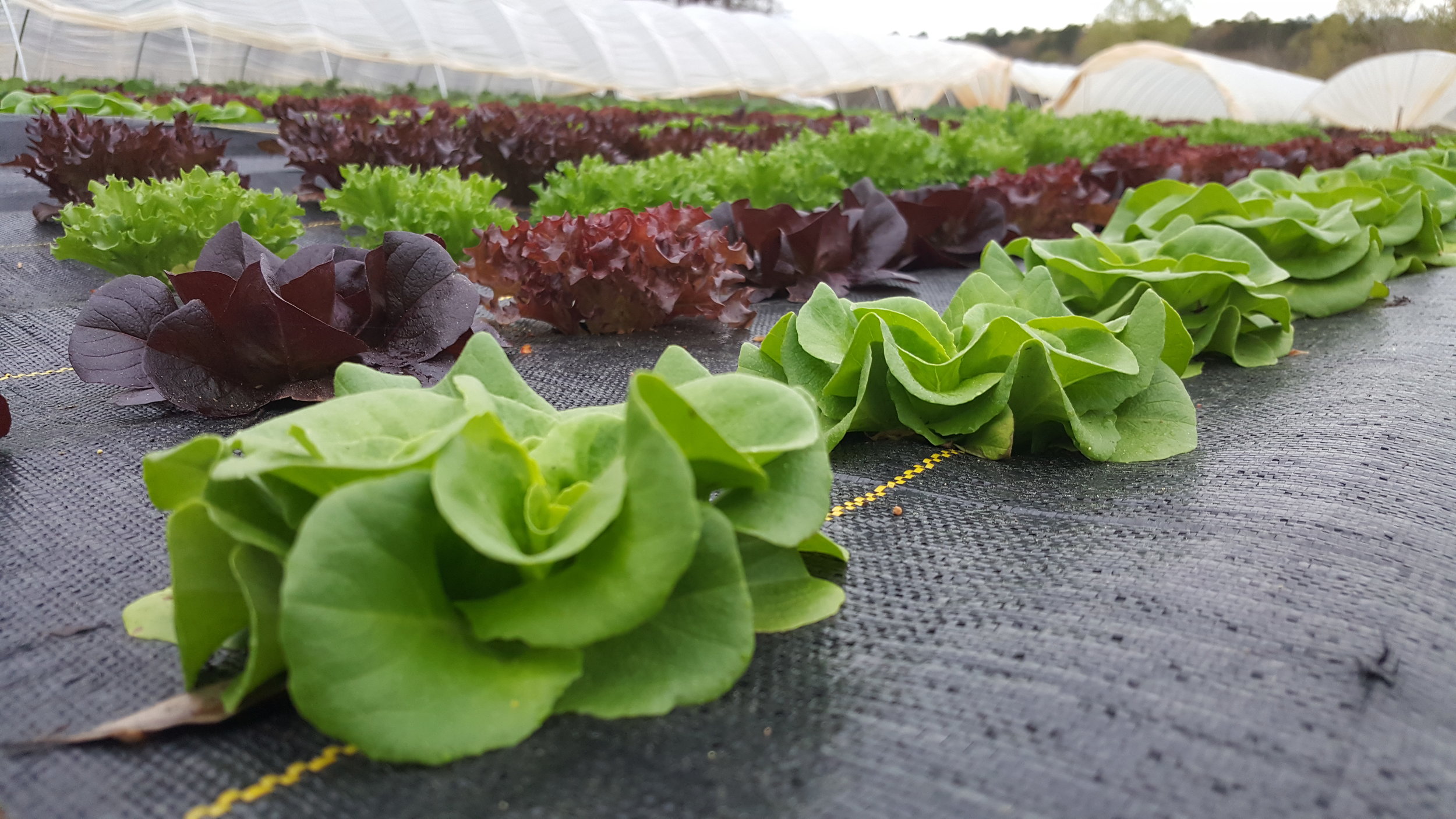 Today, Rose Creek Farms’ business is thriving. They sell online through Shopify, in grocery stores like Miss Cordelia’s, and at the Jackson, Tennessee, farmers market. They run a community supported agriculture program and sell to food hubs, like Memphis’s Bring It Food Hub. And they sell to a handful of devoted local restaurants. But that restaurant business is not what it used to be, Tyler says.

“There are a few restaurants in town who really want local food, and they’re aggressive about it. But it’s a changing market,” Tyler says.

He’s quick to name the restaurants and chefs he considers his best customers—Raven & Lily, The Kitchen, Felicia Suzanne’s, Scott Tashie of City Silo and Juice Bar, and Chef David Krog.

Tyler credits those chefs with not only providing him business but helping him become a better farmer. Take The Kitchen, for example.

“They were our first solid restaurant. We had some issues with quality, and they held us to a higher standard. They said, ‘We can’t have bugs in the lettuce.’ And I respect that. It’s rare that chefs do that. They helped us raise our bar.” 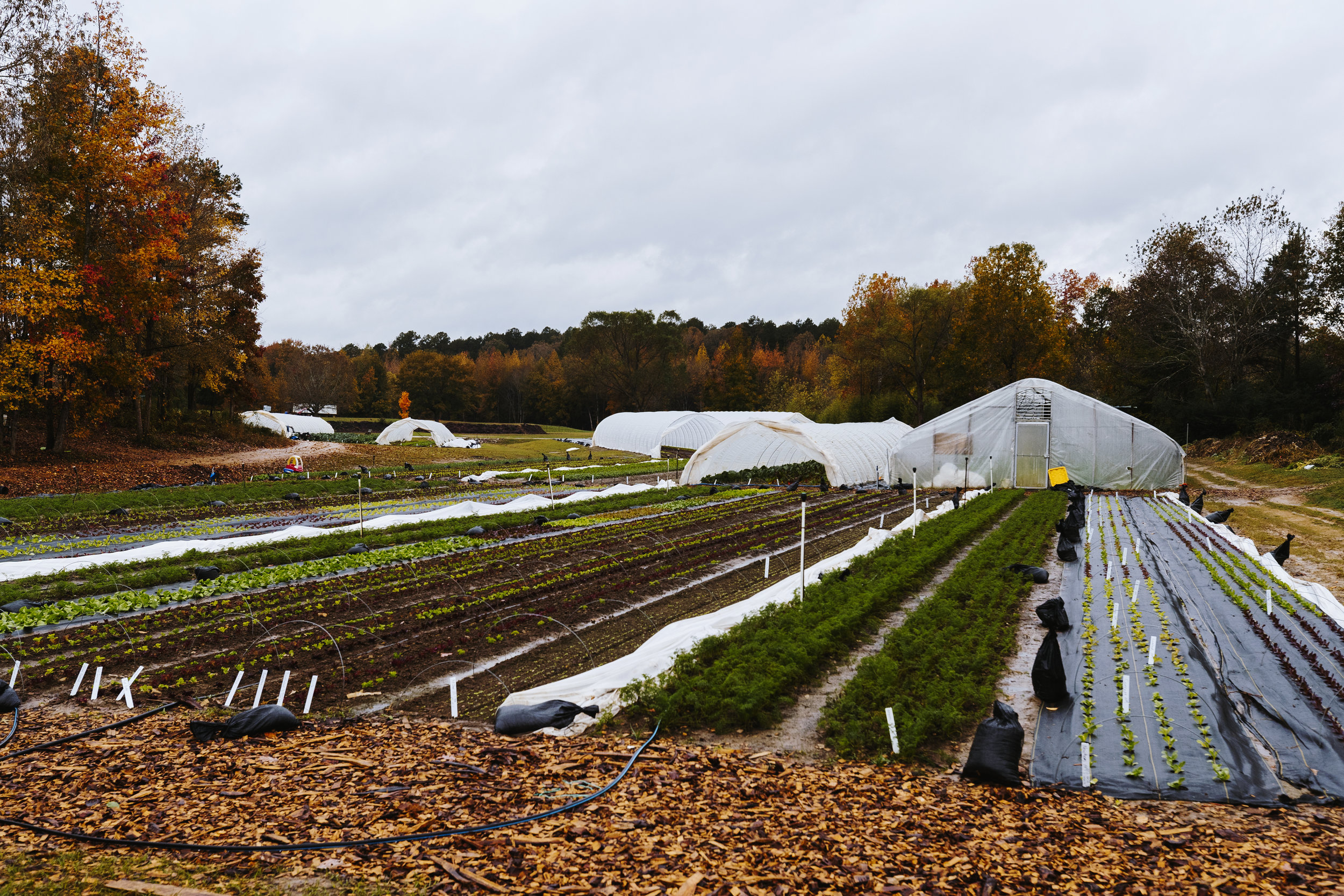 Krog, the former executive chef at Interim, now hosts monthly Gallery 901 pop-up dinners and is planning to open a new restaurant, Dory, with his wife Amanda. Krog says he uses Tyler’s produce on his menus as often as he can.

“If I’m writing a menu, I can text Ray, and he can tell me what’s in the field. That’s how I prefer to write a menu,” Krog says.

“Having a straight line to the human who is growing the food helps stay in line with the vision I have for my food.”

Tashie says he uses Tyler’s spring mix for all of the salads served at City Silo, and he purchases wheatgrass from Tyler for Juice Bar.

“What I like about Ray is he’s very professional,” Tashie says. “He has a great operation. He always delivers on time, and his product speaks for itself.”

Tyler is close-lipped on who isn’t buying, and he won’t confirm if there are any local chefs who are purporting to sell local but actually aren’t.

“I do know there have been chefs that want to buy 10 dollars worth of product just to put my name on the menu,” he says. “Or they just want to buy a little bit, to supplement maybe 10 percent of their product with me and 90 percent from Sysco. And I know that’s happened to other farmers. But who does that? Not sure.” 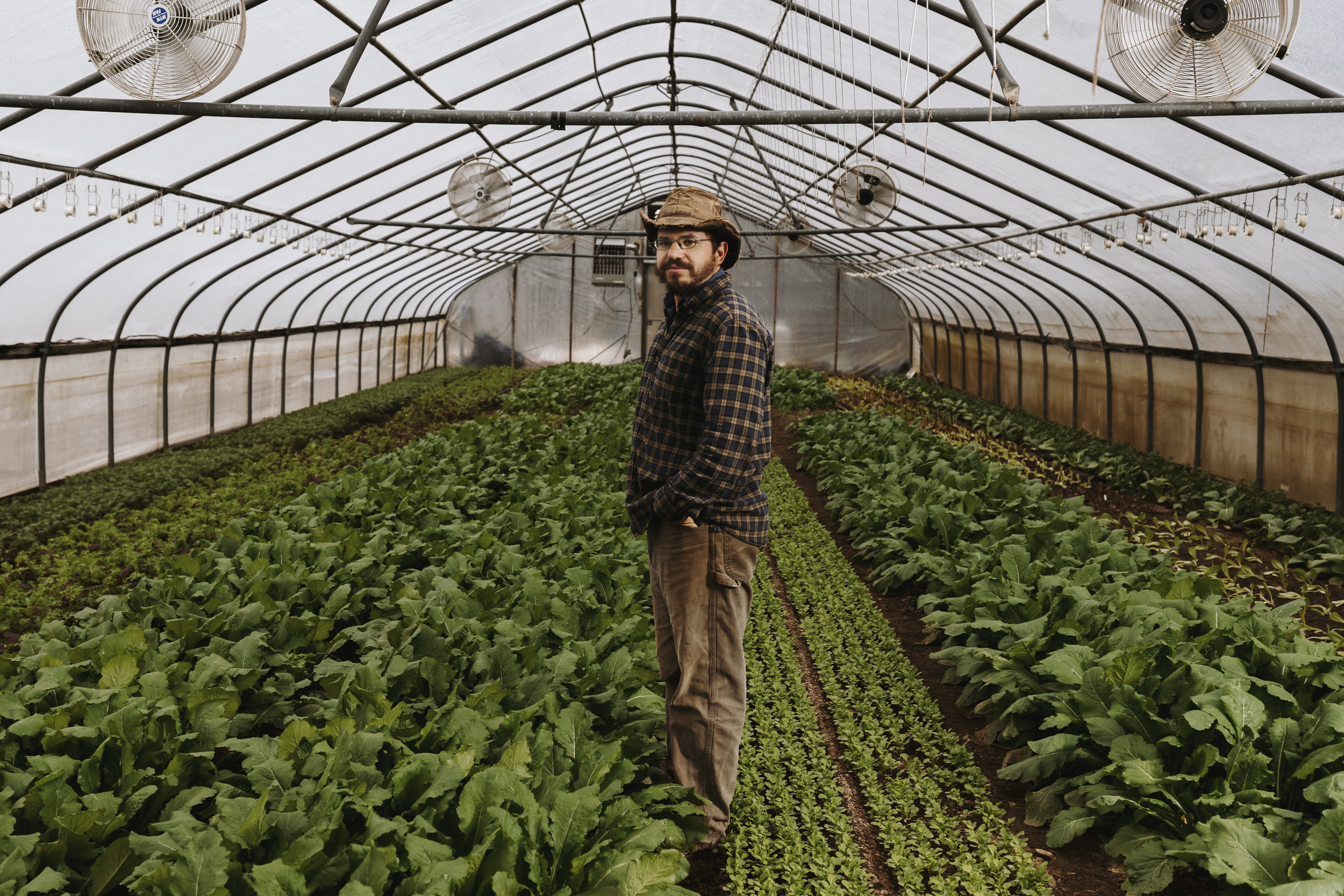 Tyler doesn’t blame those chefs, though, because, at end of the day, he believes it’s the customer that drives the market for local food. If the customer would question where a restaurant’s food is coming from, Tyler believes chefs would be more inclined to buy local to please those customers.

“If the consumer knows that’s happening, they’re going to be asking questions.”

“At the end of the day, the consumer is the jury and the judge,” Tyler says.

Customer demand, he says, is the number-one driver in the decline of local food on Memphis menus. But he admits there are other issues at play. For one, Tyler says consistency in product quality and quantity is key. If a farmer needs a certain amount of lettuce every week, Tyler has to produce that amount every week or else he risks being dropped.

For that reason, he’s worked hard to ensure he has product available 52 weeks a year.

He believes many local farms just can’t keep up with demand from local restaurants, due in part to the Mid-South’s harsh climate for growing crops.

“You have farmers growing in one of the hardest environments in the country. The Mid-South is like a farm desert, and there’s a reason for that. It is an unfriendly environment for growing. I don’t encourage people to grow here. It’s tough,” Tyler says. 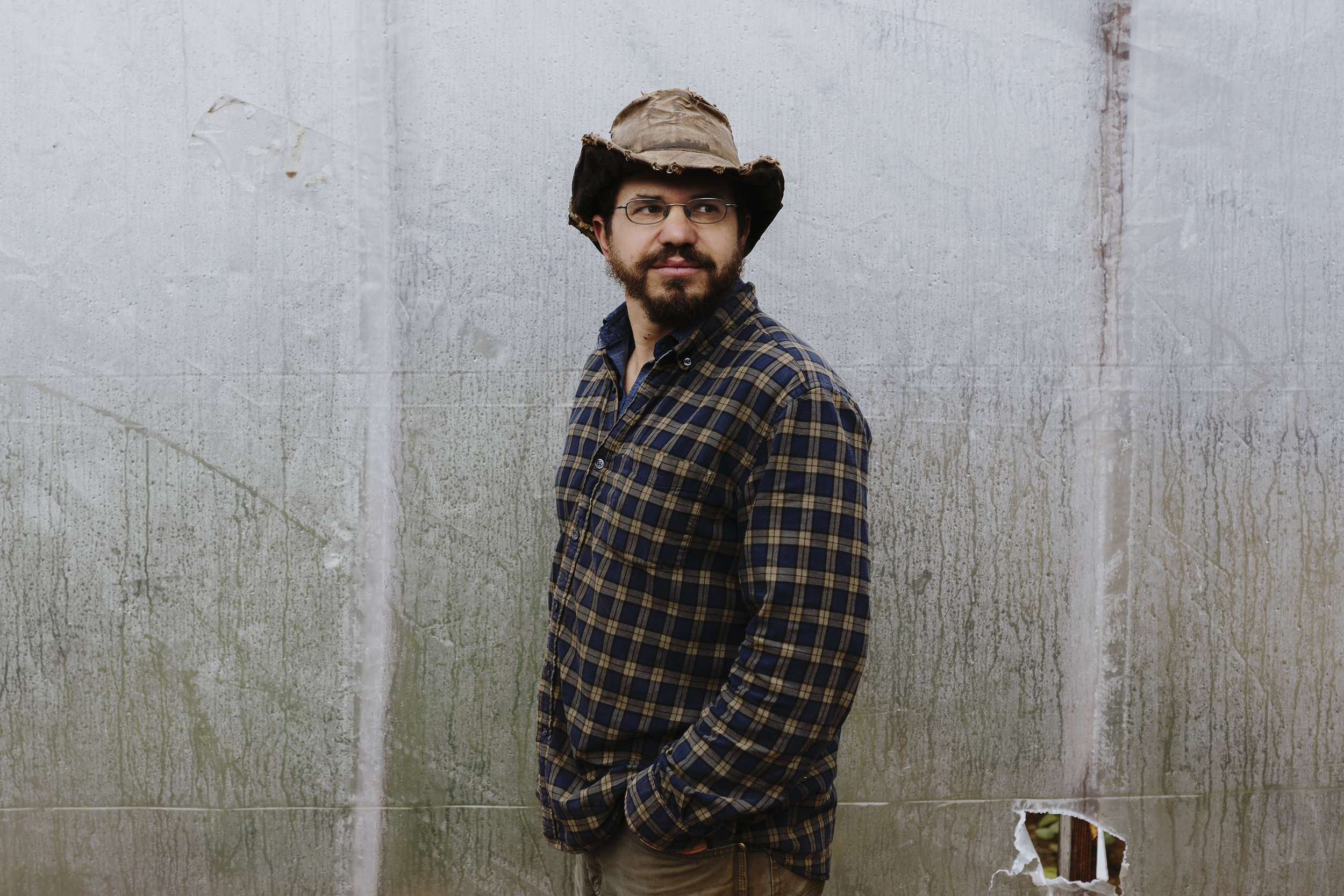 Even Tyler, who has nearly perfected the art of year-round growing, struggles with that. In mid-September steady rain left his farm underwater for seven days. He had to tell chefs the product just wasn’t there, and he says many chefs just don’t take no for answer.

That communication goes two ways, and he says chef turnover at some restaurants can be a problem too. If a new chef is hired and hasn’t passed along the farm contacts from the previous chef, he risks losing a valuable restaurant customer.

“Scott has been amazing, and he’s good with communicating with his crew if someone is fixing to go,” Tyler says. “He tells his new people, ‘Hey, talk to this guy. He’s one who is really helping the Memphis food economy thrive.’” 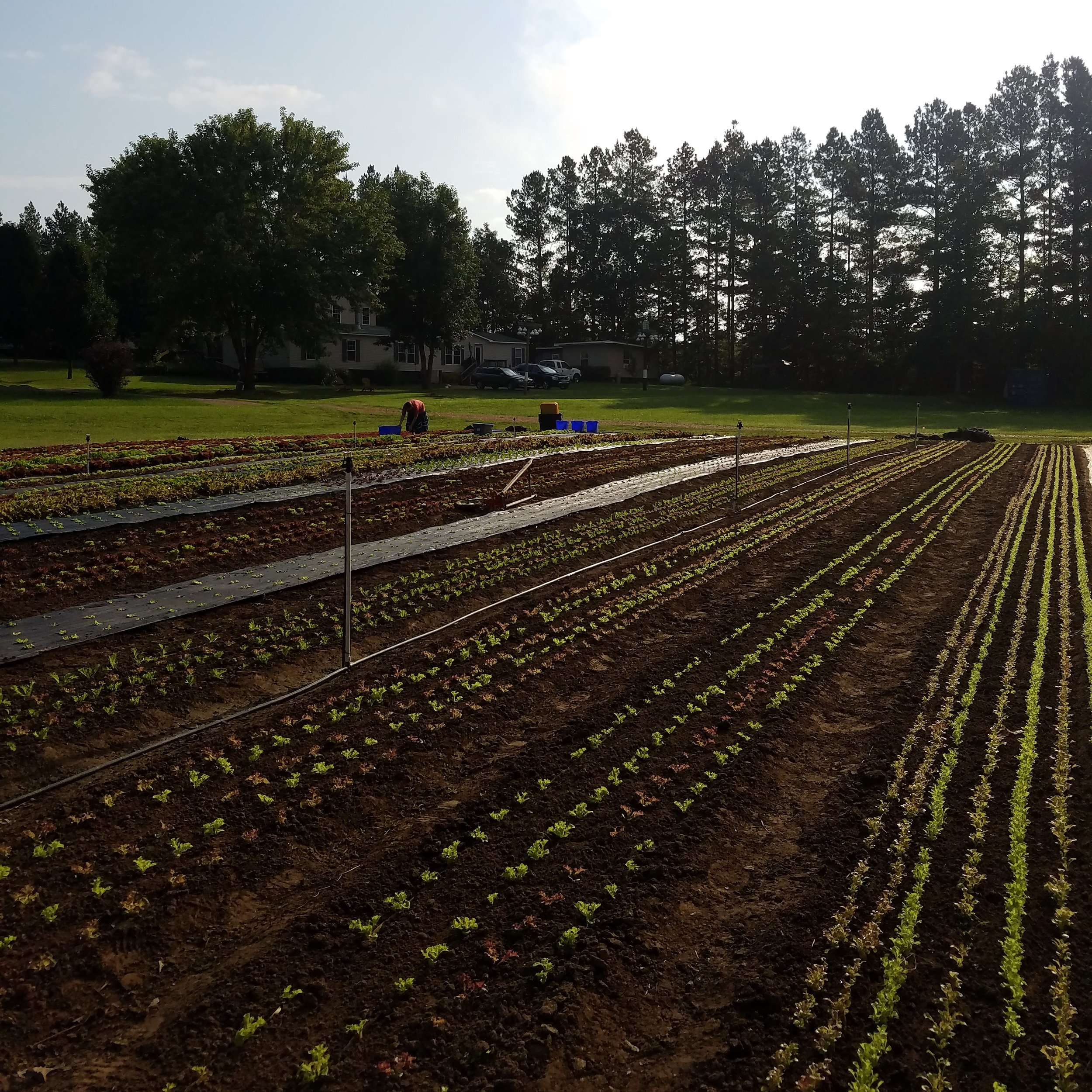 Another factor: Tyler says many restaurants are struggling right now.

“The economy has been really good to us for too long, and so I think we may be oversaturated with more restaurants than Memphis can handle,” says Tyler. “A lot more restaurants are saying they’re slow and the numbers are down.”

He’s heard from some chefs that they’d love to buy local but they simply can’t afford it as budgets are being squeezed. It’s much cheaper to purchase lettuce from Sysco than from a local farmer.

“If you’re buying from Sysco, they’re buying from the cheapest place possible, which is Mexico. But have you ever done research on what they’re paying farm workers there? It’s terrible. You want to talk about the real cost of food, that’s it,” Tyler says. 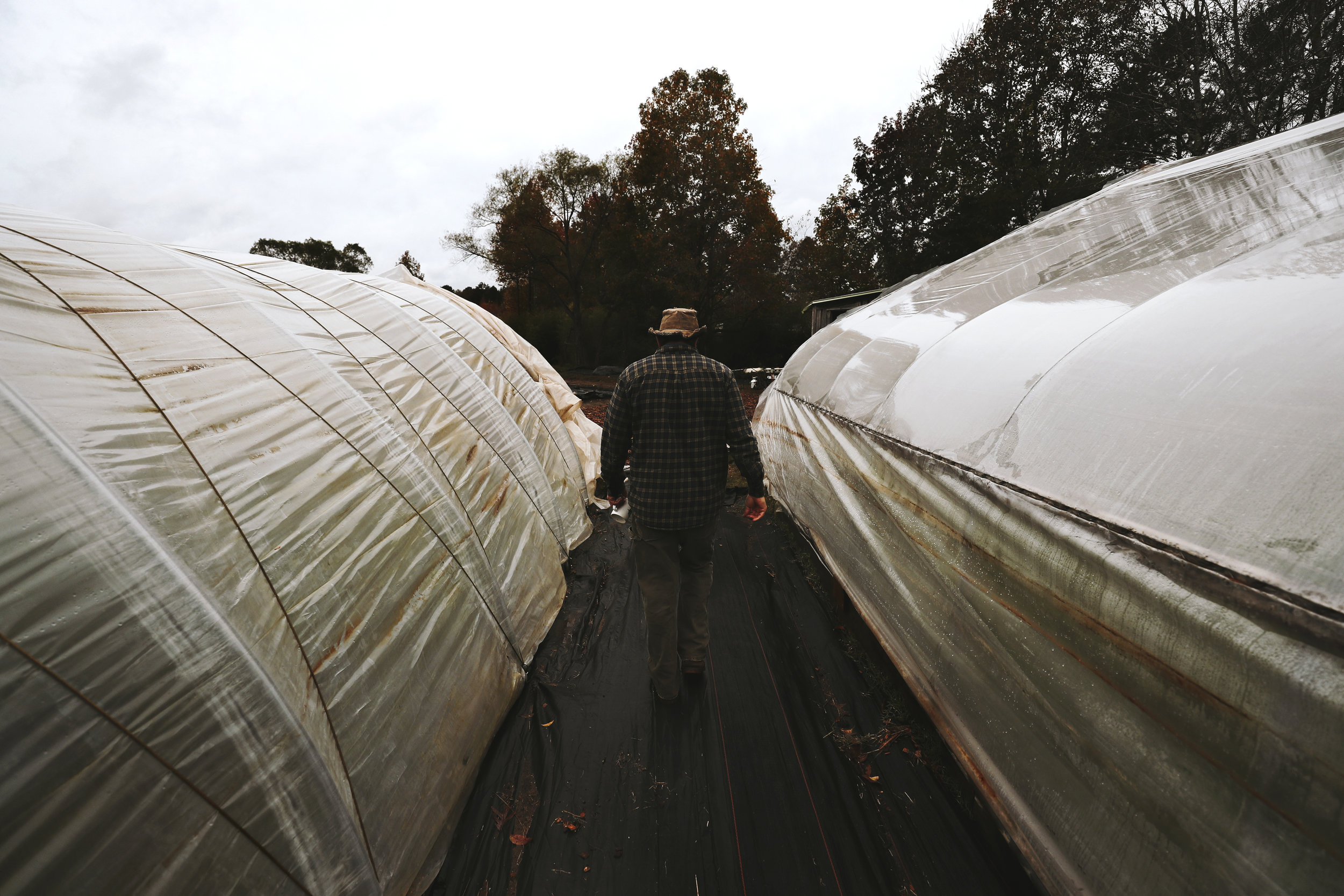 Those who do bite the bullet and pay more for local, despite budget, get a fresher product that will last much longer, Tyler says. He guarantees his greens will last seven days, or he’ll replace them for free. He says greens from Sysco might last two days before going bad.

That cost issue really goes back to the customer demand, though, Tyler says. If customers are willing to pay more for local food on menus, chefs will buy.

“It is more expensive, and the consumer has to realize the economics of local food.”

Despite the fact that chefs aren’t buying local like they used to, Tyler says his business is doing better than ever. He’s learned to diversify markets—selling online and at the farmers market—and that’s provided a steady income to feed his large family.

“Complaining about a broken food system will never fix the food system. Making people aware of certain issues is a place to start, but complaining, griping and being hateful about it is no way to fix it. Rather, what we want to do is have the best produce, amazing customer service, and have the best in our little farm world. And when people want it, there’s at least somewhere to get it.

“And we know, on our side, there are issues to fix. It’s not just the consumer,” Tyler says. 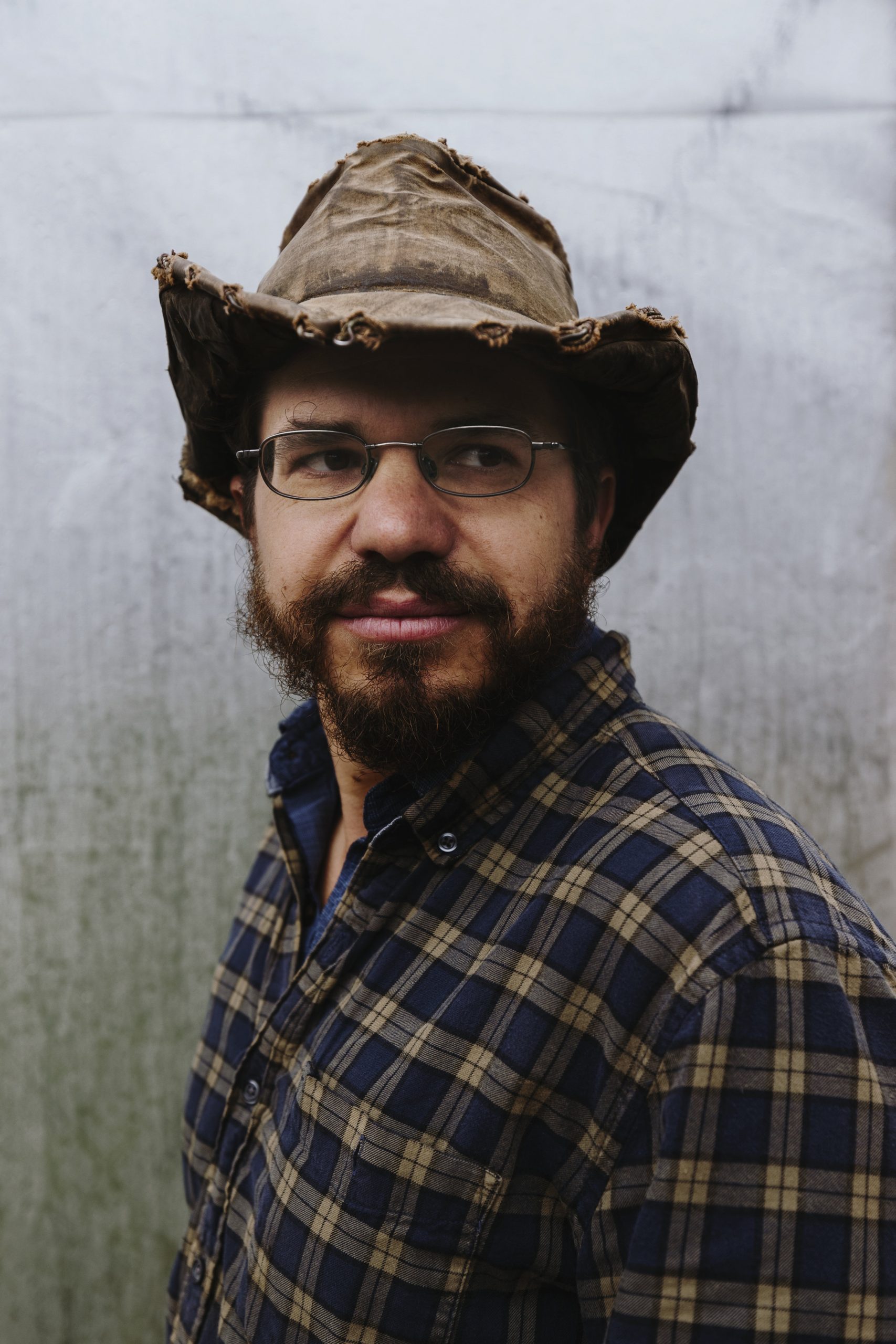 Bianca Phillips writes about vegan food (and shares images of everything she eats) on her blog, Vegan Crunk. She’s the author of Cookin’ Crunk: Eatin’ Vegan in the Dirty South. By day, she works as the communications coordinator for Crosstown Arts/Crosstown Concourse. She and her partner, Paul, are the proud parents of five cats and one very stubborn (but adorable) pit bull.