Editor’s note: Global Café has requested that only the chefs’ first names be used to protect their privacy. Becky Githinji has replaced Joe Cartwright as General Manager since the writing of this story. 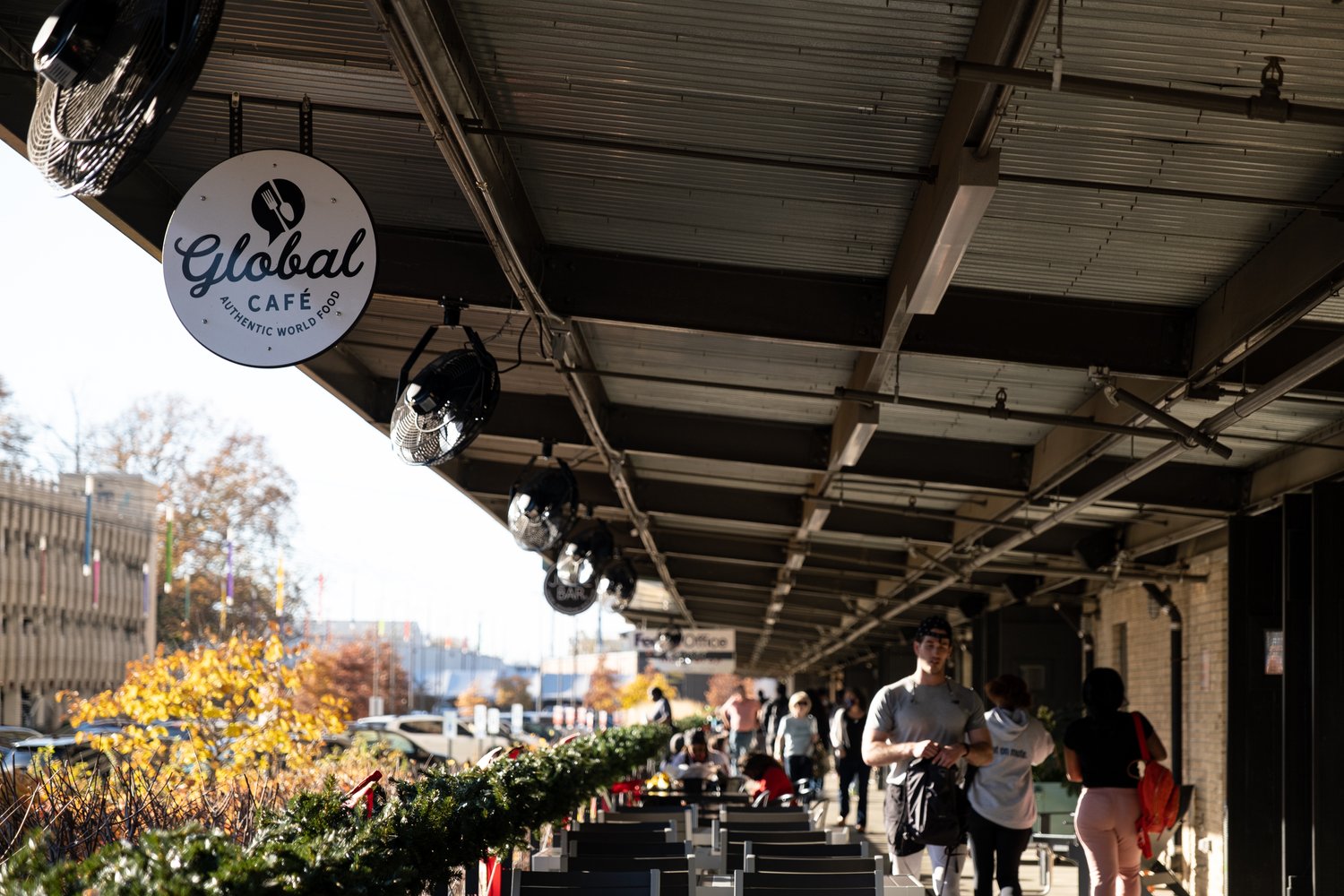 Back home in Sudan, Chef Somaya of Global Café was a special needs teacher. But her passion was always cooking.

“In Sudan, every house has a chef: the moms and daughters.”

“When you’re married, the woman cooks everything,” she says. “I cook for my friends, for birthdays, for weddings, everything. I cook for my husbands’ friends.”

And since August 18, 2018—the day Global Café opened in Crosstown Concourse—Somaya has been cooking there too. She started as the assistant to Chef Ibti, who ran Global’s Sudanese food stall when the restaurant opened. After Ibti left Global in 2020, Somaya took over the Sudanese menu. Like so many of the immigrants and refugees who have worked at Global Café, Somaya is doing what she loves. 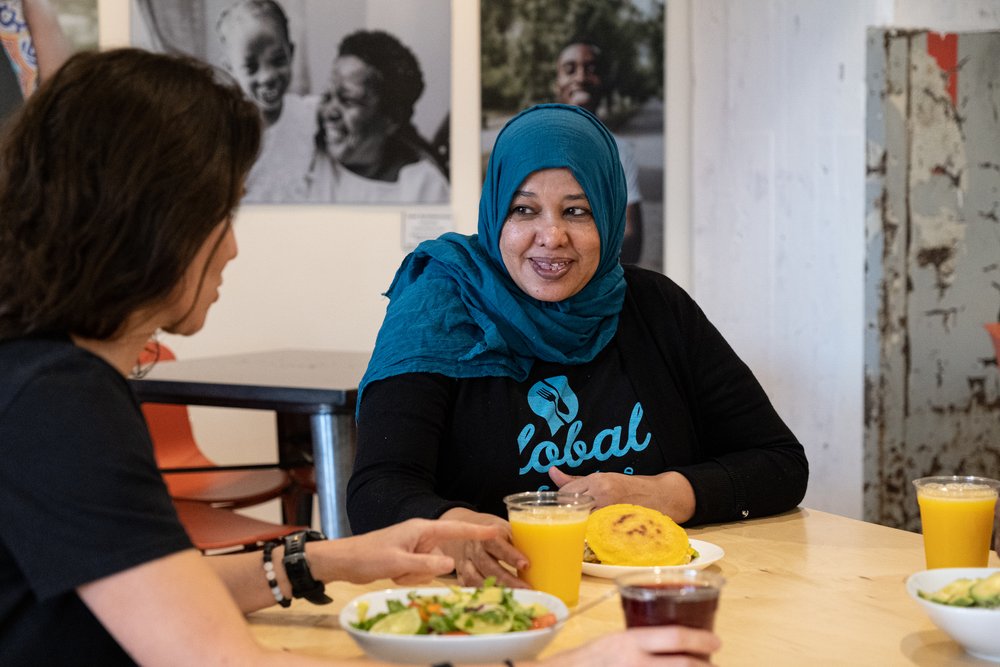 Global Café was always meant to be more than just a restaurant. Owner Sabine Langer, herself an immigrant from Switzerland, calls Global a social enterprise.

“We’re set up so I don’t make any money from the restaurant,” Sabine says. “Global was started to help refugee and immigrant food entrepreneurs, and I want all the money that comes out of it to go back into it.”

Sabine says she didn’t want the chefs to ever feel a need to compete for customers, so regardless of how much food is sold from a chef’s stall, they all get paid the same. It’s a business model that fosters community and love, rather than one that forces chefs to elbow each other out to try and get a customer.

“So if they run out of an ingredient, they can go to the next stall and see if that person has what they need,” Sabine says. “In the refugee realm, they’ve had to fight so hard, and we want to take that down and bring all the love and support.”[/vc_column_text][/vc_column][/vc_row]

When Global Café opened in 2018, there were three featured chefs — Indra of Nepal, Ibti of Sudan, and Fayha of Syria. Later, there were Maria and Pancho of Venezuela. And today there’s Somaya, and sisters Zoe and Maria of Mexico.

“Our premise is: We’ll set you up, but if you want to go and set up your own restaurant, we’ll help you with that,” says Sabine. “If you want to stop because you don’t like it, no hard feelings. If you want to come back, it’s fine too.”

Sabine says the restaurant has empowered the chefs, some of whom were refugees struggling to adjust to a new life in a new country.

“Ibti was able to pay off her house. Maria was able to buy a new truck. Fayha bought a house. It’s empowered them financially, and beyond the finances, it’s given them a voice,” Sabine says. “You know, when you have an accent, when you look different and cover your hair, people treat you differently. It can be really tough. Working at Global Café has been a self-esteem builder for a lot of these women, so they know their worth.”

Take former Global chef Ibti for example. Ibti’s husband was a journalist in Sudan who got in trouble for speaking out for women’s rights. Ibti had two degrees herself, but the couple ended up in a refugee camp before being resettled in America in 1999.

“I had a completely different career. I have a philosophy degree, and that’s the field I worked in when I was living in Sudan,” Ibti said in a 2018 article in the Crosstown Concourse Conveyor newsletter. 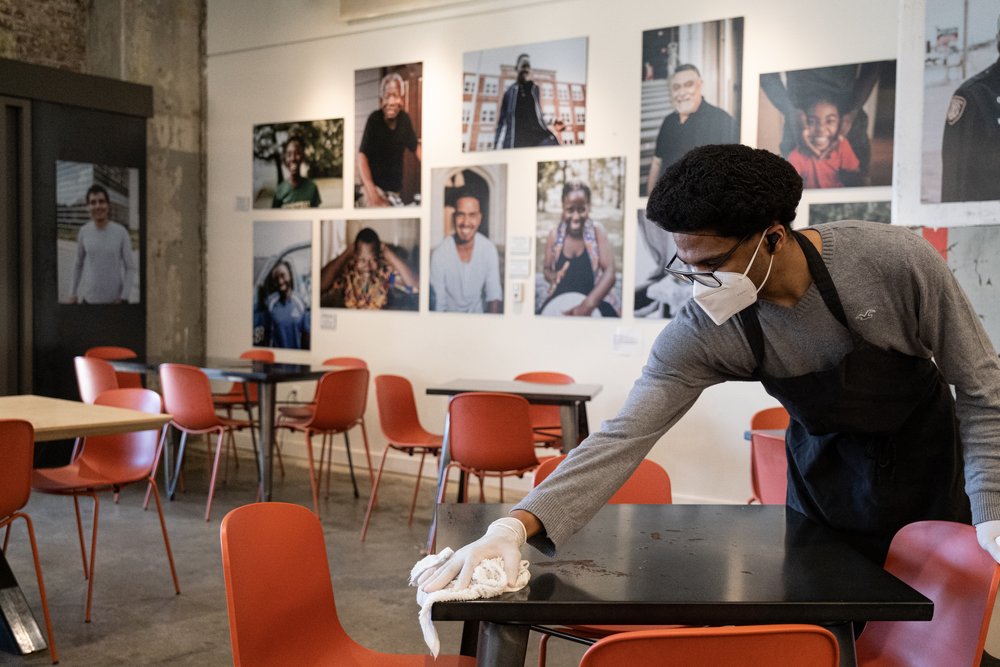 But Sabine points out that, despite one’s education in their native country, the paperwork “doesn’t always translate in the American system.”

“You have an accent and don’t speak the language. It can be so hard. You can be super educated, and you can end up working in a warehouse,” Langer says. “So knowing that you can do something else and take charge of your own financial life is pretty cool.”

In fact, it was her own tough transition into American life that inspired Sabine to open Global Café.

“I’m from a rich country, and I speak English semi-OK. I have the financial means to support myself—but what if you don’t?” asks Sabine. “You come into the U.S. and are adjusting your status with the whole green card system. My process was horrendous. I did it in L.A. in 1997. There were hundreds of people in line, like cows on their way to slaughter. But I was privileged, so let me think about the people who had to flee their country. What can I do to help?” 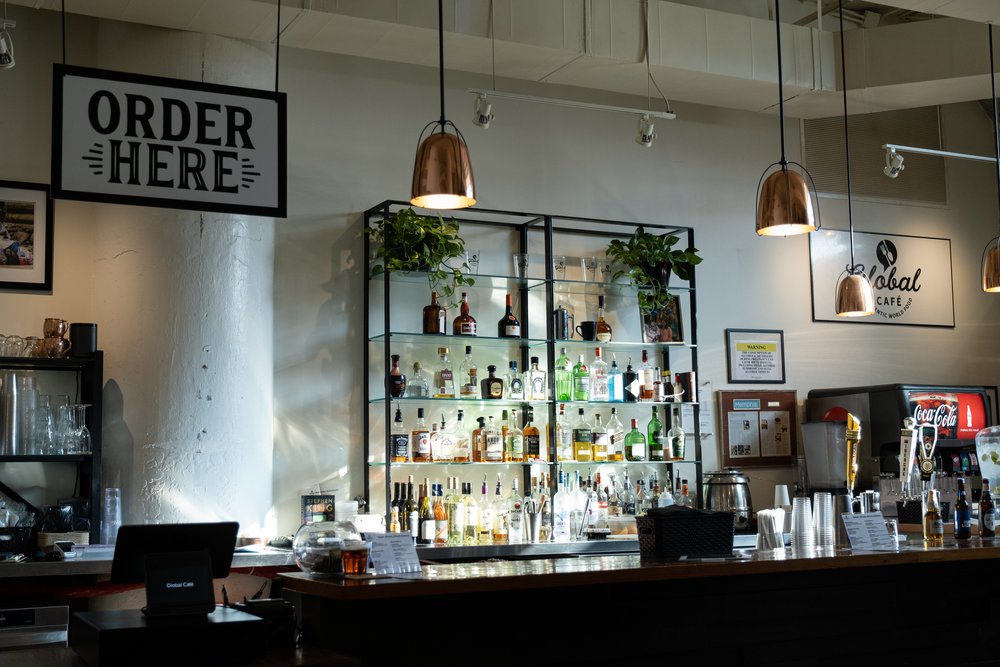 Sabine never saw herself as a restaurateur, but she’d been volunteering with the Refugee Empowerment Program and wanted another way to give back. She and Juan Viramontes—Global’s former general manager who recently left the restaurant to move home to California—started daydreaming about the concept for Global Café. In 2018, that dream became a reality in the newly opened Crosstown Concourse.

Not only has Global empowered the women (and men) who have worked there, but it’s also exposed Memphians to the plight of refugees and immigrants. Before the pandemic, the restaurant was set up with three stalls, and customers ordered food directly from the chefs. During slow times, the chefs would even come out and interact with customers.

The pandemic changed that setup a bit, but Sabine says just tasting food from a new-to-you country can open one’s mind to learning more about that culture.

“People may think the Sudanese or Syrian people eat weird food, and then they try it and realize it’s not crazy-spicy, and it almost tastes like your grandma’s meatloaf or something,” Sabine says. “That’s how people relate. Yeah, they may cover their hair, but we’re more similar than we are different.”

At the beginning of the pandemic, Global Café took their social enterprise concept to a new level. Not only were they focused on uplifting the immigrant and refugee chefs and telling their stories, but they also made it their mission to offer free meals to essential workers. Customers were able to donate to that mission, and Global covered the rest of the costs. 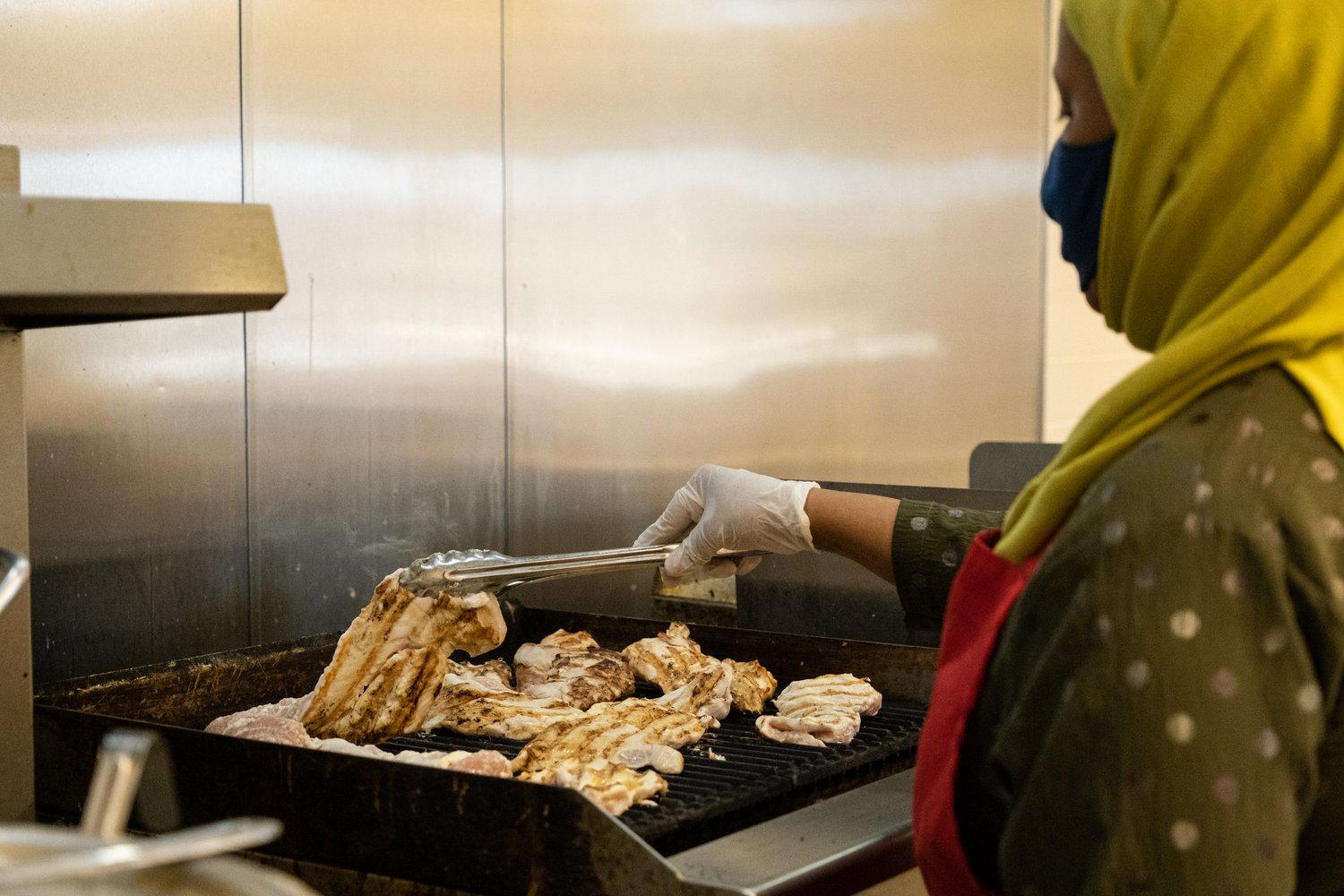 “It kept our staff busy and gave them something to do,” Sabine says. “They could have said, ‘No, we want to stay at home.’ But they wanted to be here and feed people. Our tagline is: ‘Our first ingredient is love.’ And if you ask these chefs for help, they will always be there to help out.”

“In a lot of cultures, feeding people is an act of love.”

Since the pandemic began, the concept of Global has shifted in several ways. Overnight they pivoted to online ordering, which is still an option, though the restaurant is open for dine-in again. The chefs no longer interact with customers behind their own stalls, and there’s less emphasis on having chefs represent their countries and more focus on offering a global menu. Currently, Global Café is serving recipes from Sudan, Syria, Venezuela, and Mexico. 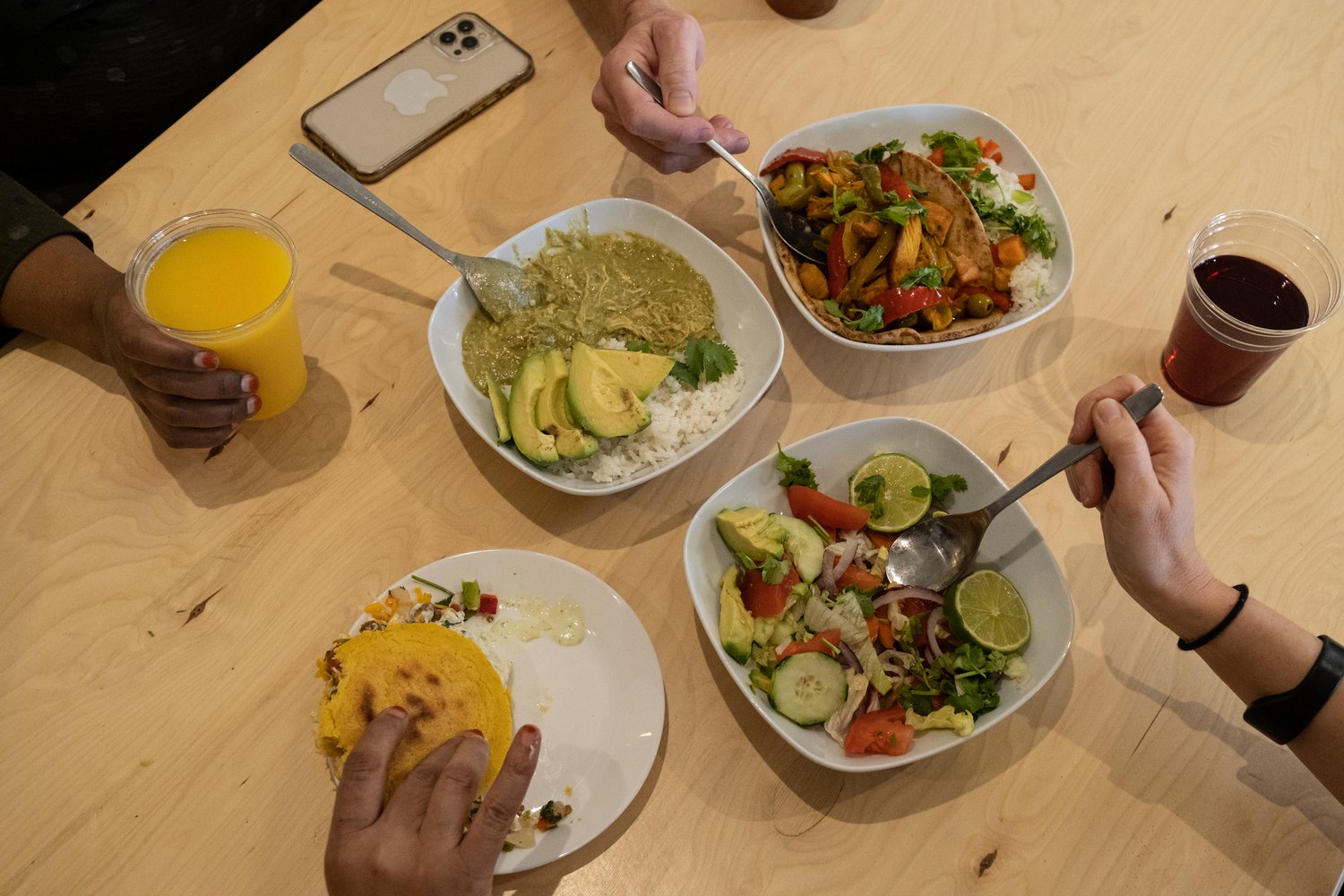 Juan moved back to California in the summer of 2021, just after the restaurant’s three-year anniversary. Sabine hired Joe Cartwright, former owner of Wilson Cafe in Wilson, Arkansas, to replace him. Juan’s recipes—tacos, tortas, asado bowls, and his locally famous margarita—are still on the menu. But gone are Juan’s Taco Tuesdays and Torta Thursdays, which offered $2.95 margaritas with taco or torta orders. 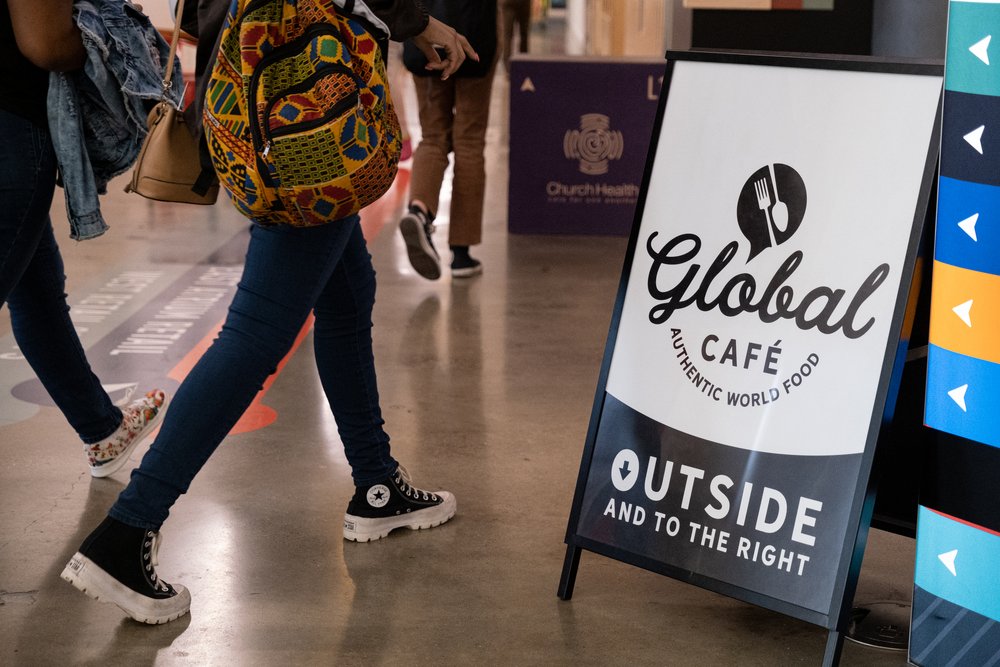 “During the pandemic, Juan was amazing at coming up with new ways to attract customers, like Taco Tuesday or Torta Thursday. But it got out of control. When you have an hour-and-a-half wait for tacos, it’s just not worth it,” Sabine says. “Since Juan was moving home to California, we decided to take it down a bit. And with the pandemic easing, we thought it was a good time to re-jigger things.”

Joe plans to try some seasonal menu changes, a new concept for Global, which, in the past, only changed the menu as new chefs came on.

“When you eat here a lot, it’s always the same thing, so we’re trying more specials,” Sabine says. “And some of those may become staples on the menu. Some of the favorites are going to stay, or they may go away and come back in the summer. We’ll be a little more flexible and adaptable.”

Sabine says she wasn’t sure how the chefs would react to Joe, a white male, but she was pleasantly surprised at how quickly the staff took to him.

“Joe was like, ‘Why would you hire a white dude?’ And I’m like, ‘Good question.’ But he gets it. He gets the mission,” she says. “He speaks Spanish and French, so he has that sensitivity. The staff were able to establish a connection with him, and it’s cool to see them all connect. Now they’re asking him if they can try this new dish or that new dish, and that’s what we want. We want them to feel empowered.”

Bianca Phillips writes about vegan food (and shares images of everything she eats) on her blog, Vegan Crunk. She’s the author of Cookin’ Crunk: Eatin’ Vegan in the Dirty South. By day she works as the Newsletter Editor for the Daily Memphian. She and her partner, Paul, are the proud parents of five cats and one very stubborn (but adorable) pit bull. @biancaphillips