0 0
The stories and faces behind the Cooper-Young Community Farmers Market
During winter here in the Mid-South, culinary bright spots can get us through some dark, cold days. One notable point of light is the Cooper-Young Community Farmers Market, a year-round venue for vegetables, baked goods, artisan creations, dog biscuits, soaps, plants, and more. More than just a shopping experience, the CYCFM is comprised of vendors and managers who know their products and appreciate their customers. It’s worth getting out of bed on a Saturday for this.

The magical market experience seems to materialize early each Saturday morning by some sort of benevolent witchcraft. The reality, of course, is a bit more gritty and filled with logistics.

A Chinese proverb says, “Women hold up half the sky.” At the CYCFM, plenty of women are doing at least their fair share to grow, sell, organize, and support this Memphis gem. 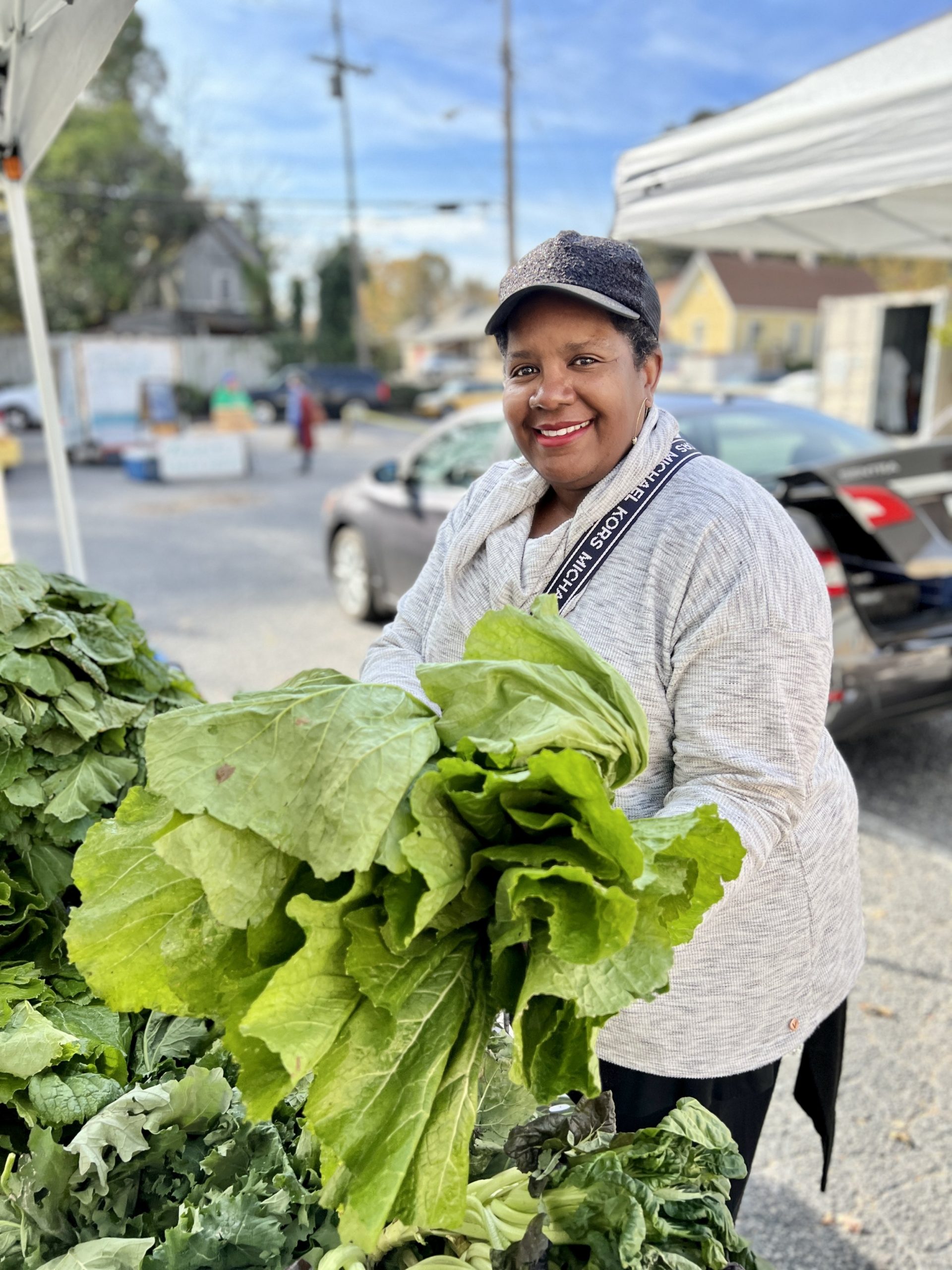 The women at the top

Michelle Smith has served as a board member since the market was founded in 2010. In 2009, her mother received a phone call from another founding board member, asking if she would like to participate. She didn’t—but Michelle did. “I’ve been on the board ever since,” says Michelle.

During one transition period, Michelle also served as the market manager. “From that point on, I have been at that market almost every Saturday. I can do the setup, breakdown, communicate with vendors—everything,” she says.

Michelle credits the women of the original board—Lori Greene, Sue Easley, Sharron Johnson, Robin Rodriguez, Karen Lebovitz, and Beth Brooks—for demonstrating a can-do attitude. Each used her passion and love to start the market—a project that has continued to bring joy to the Memphis community. “I want to give a special shout-out to Sandy Watson, who joined our board a few years later. She really stepped in to assist me with the day-to-day operations of the market when the need arose. We had a lot of fun together,” she says.

Amaranthus Hyden and Sarah Turner are the current managers of the CYCFM and have been in that role since April. At that time, Amaranthus, or Am, as she’s known at the market, was already working for Debra Lockard of Lockard Produce, helping with her wildflower project. “Debra was really devoted to helping me find a job, and she’s on the board. She was like, ‘You gotta apply for this. You’d be perfect for this job.’”

Sarah used to be a vendor at the market, selling microgreens and specialty jams. Then Covid happened, and she got cancer. “After my treatments were over, I saw a job opening for a market manager,” she says. “I love this market and wanted to stay connected to the people I already knew here. I was confident I could do all of the tasks needed to run a market smoothly.”

Sarah works mostly with the vendors, making sure their paperwork is in order for operating a business. “I create the layout for each Saturday market and communicate information from the state or the health department. I handle communications between vendors and the board. I also manage problems that may arise,” she says.[/vc_column_text][/vc_column][/vc_row]

The women in the booths

Venture out into the market booths, and you’ll find many of them are run by women too.

Debra Lockard is known as the “tomatoes, potatoes, and onion lady.” She started Lockard’s Produce seven years ago, but farming was a lifelong dream of hers. “I grew up farming,” she says.

“After I retired from my job as a school principal, I said to myself, ‘Let’s go ahead and live my dream.’’’

She started selling at the Scott Street Farmers Market. When that closed, she did a web search for another market and ended up at CYCFM. Love for the earth fuels this farmer’s enthusiasm. “The soil in Ripley is the best in the world,” she says. “When I bring my transplants up there, they seem to relax and say, ‘Hallelujah! We’ve arrived now.’”

Mary Kathleen McCarthy sells vegetables for Tubby Creek Farm. “Josephine Alexander was a friend of mine even before she and Randy bought the farm,” she says. “They needed some extra help when tomato season came. I was happy to help sell at the market for a few hours and leave with tons of tomatoes.” As the farm expanded, they needed someone to come in for the CSA season at the market. Mary jumped at the opportunity. “I really look up to Josephine and the vast quantity of knowledge that she has amassed regarding how to grow, properly store, and prepare vegetables,” she says.

Running a year-round market comes with some challenges—but even these usually have their bright spots. For starters, winter is cold. But Am sees the advantages the cold brings. “What’s amazing is that we still have farmers producing food; food doesn’t stop,” she says.

“A year-round market is great because, once you start synchronizing with nature and the seasons, you start to crave certain things that are in season.

Like, ‘I can’t wait for winter because there are going to be all of these crisp greens.’ Greens are the best in the winter.”

Sarah says one challenge is that all of the other local markets shut down in the winter, so some people don’t know that Cooper-Young is still open. “We have to consistently get the word out that we’re here year-round,” she says.

“Additionally, in January and February, farming gets a little weird…

and sometimes we struggle to have enough product just because it’s a challenging season to grow in.

Some vendors have high tunnels and greenhouses, though, so we’re starting to have more things available.”

Mary enjoys the new faces that winter brings to the market—from new vendors and the customers they bring with them. “The downside is that it’s winter. It’s often cold and rainy here; that weather is unpleasant for almost everyone,” she says.

Michelle says that the market actually thrives in bad weather. “When we get down to the real cold, ice, or snow, that’s a challenge,” she says. “But we brave through that, and the times we do not hold an official market, we still open the market to vendors who just show up. Actually, the very first day of the market [in 2010], we had driving rain, the worst weather possible.” That was the day Michelle bought a rain suit. 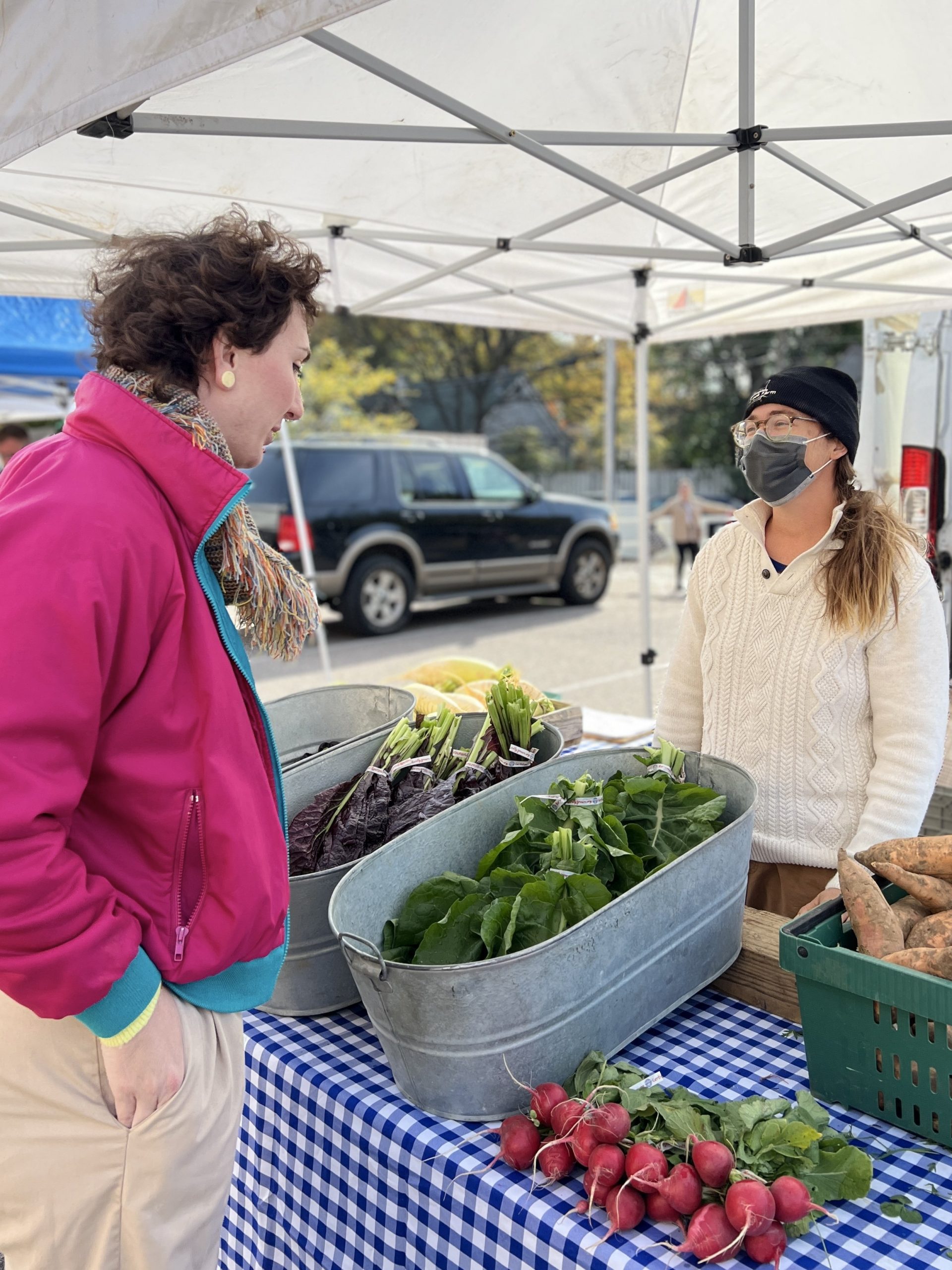 The year-round schedule is not the only thing that sets CYCFM apart. Michelle says the customers are loyal to the vendors and to the market overall. “It’s a great place to gather, communicate, and enjoy with your family,” she says. “It’s also an opportunity for people to learn about products they may not be aware of and to meet the farmers who farm it.”

Sarah says the CYCFM is some people’s grocery store. “They’re coming here on a weekly basis. At other markets you might get a lot of what vendors call ‘lookie-loos.’ So you might get foot traffic, but people might not necessarily buy things,” she says. “Here, people are purchasing their food for the week.”

Debra says the market has grown into a family. “I watched the children of vendors grow up [over my time here.] If someone doesn’t show up, we’ll call and see if that vendor is OK,” she says. “We vendors grow different items and share them with each other.”

Recently Richard [Simmons, of Old World Farms] brought over a cardoon—something she had never seen before, much less grown. And Freddie Rhodes of Rhodes Farm taught her how to raise honey. She adds, “The customers are consistent, and they know who we are too.” 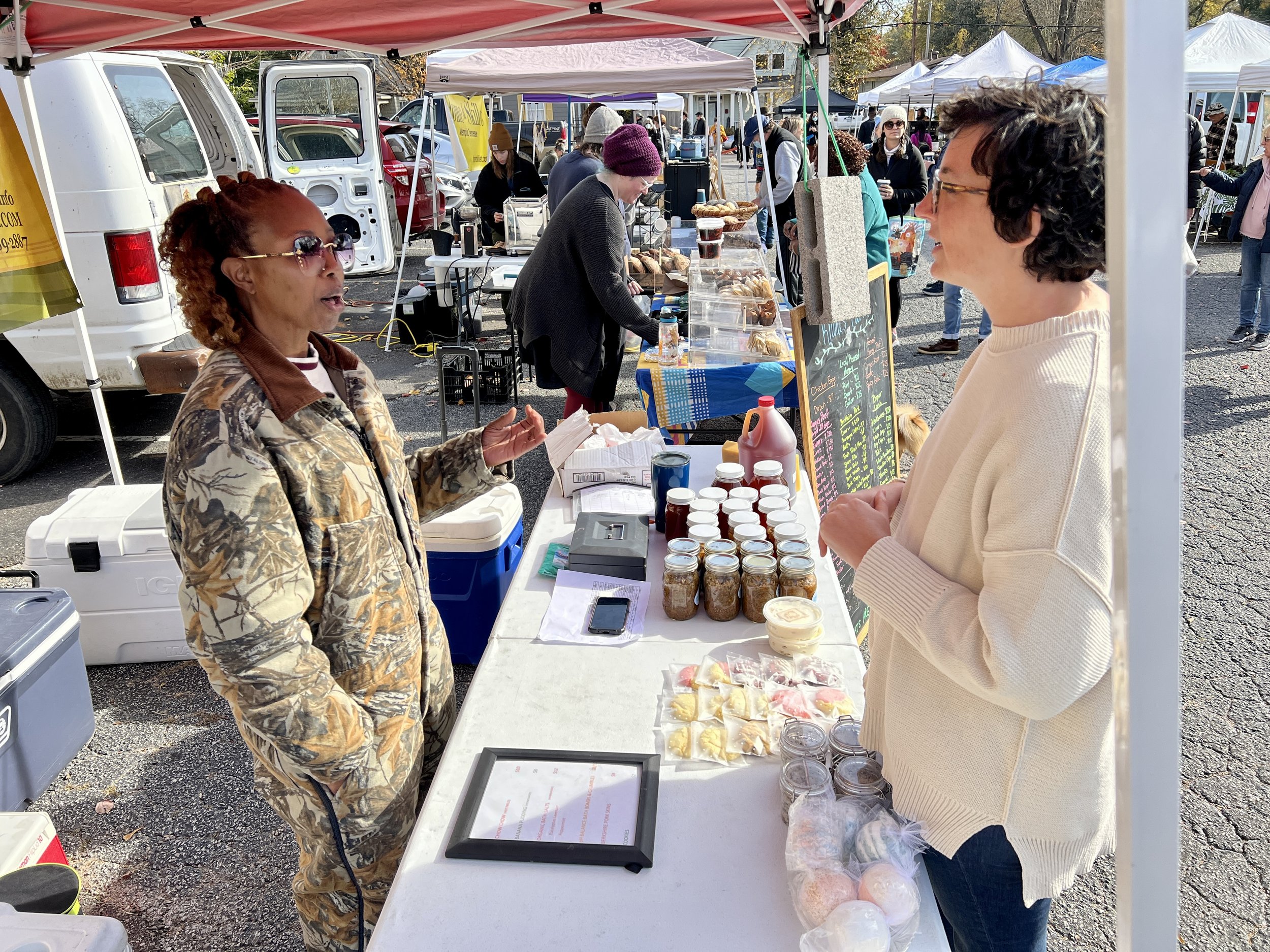 “I like sharing recipes and hearing some back from customers,” she says.

These acts may seem simple, but they can be life-changing.

Am grew up in Memphis—in a food desert. “We mostly ate sugar: the off-brand of the off-brand cereal and sometimes fast food three times a day,” she says. As an adult, she learned about healthy eating. “I’m so passionate about this market because now I can do for others what someone did for me,” she says. “I want people to know what good food is and that there’s more to food than just convenience; there’s nutrition and the reward of being healthy.”

Am wants to see the farmers market be a place that’s both equitable and profitable for vendors. “Our Double Greens program helps to subsidize the cost of food for those in need,” she says. “People can participate in the local economy and have access to community resources like HIV testing once a month. We also have really awesome music.”

Am sees the market as a space where other people are making healthy choices and trying new things. “I want people to feel like they are experiencing a community in a way that is empowering and makes them feel that they are part of something,” she says. “That’s what the market is: everyone creating a space that is unique and that only our community could create.” 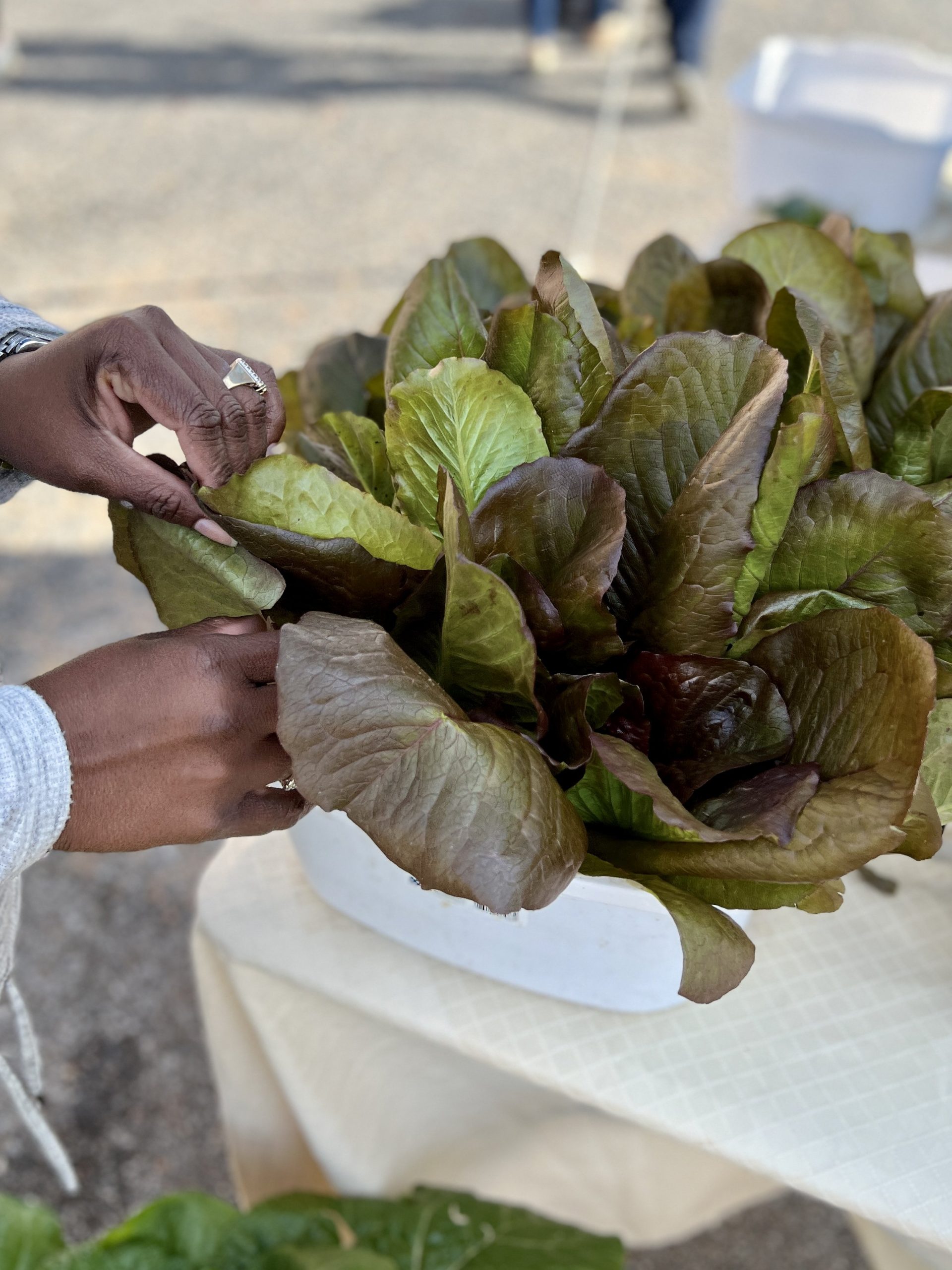 Wondering what to do with all those winter greens? Here are some suggestions from some of the CYCFM women.

Am loves arugula.  “I just like cutting it up and putting it into a salad with radishes, carrots, maybe some olives, maybe an apple, some sunflower seeds. And I also really like cottage cheese in my salad. Hopefully no one gets upset about that,” she says.

Debra’s favorite is turnip greens. “I mix them with other types of greens and add a few turnips [roots] for flavor when I boil them,” she says.

Mary’s absolute favorite green—sweet potato greens—isn’t at the market very often. They’re sweet, and I like to sauté them with onions and pecans and finish with a tiny drizzle of maple syrup,” she says. “In second place are turnip greens sautéed with some onions, butter, salt, and garlic. It’s pure wonderfulness.”

Sarah can’t pick! “I like kale, mustard, and spinach, all for different reasons,” she says. “I grow kale and love that it can take a beating [from the weather] and still be fine. The most simple way to prepare it is to cut it up and sauté it. A very light cooking is all they need with the fat of choice (lard, oil, or butter), a little salt, pepper, garlic, and onion.”

Michelle shares her mother’s secrets. “During the greens cooking process, there are no measuring cups or measuring spoons,” she says. “She uses a minimal amount of salt, crushed garlic, pepper, ham broth, yellow onions, a dash of sugar, and her very own little secret ingredients. The greens are simmered for several hours as she scurries around the kitchen.”

Heidi Rupke finds pleasure in maintaining the practical skills her grandmothers loved: quilting, gardening, keeping chickens, and cooking from scratch. She enjoys biking around Midtown with her family and will drop everything for a good plate of Japanese-style pickled vegetables. @rupkeheidi

Emma Meskovic is a digital content manager, illustrator, and super fan of this publication who loves taking photos of her food. @emmamesk