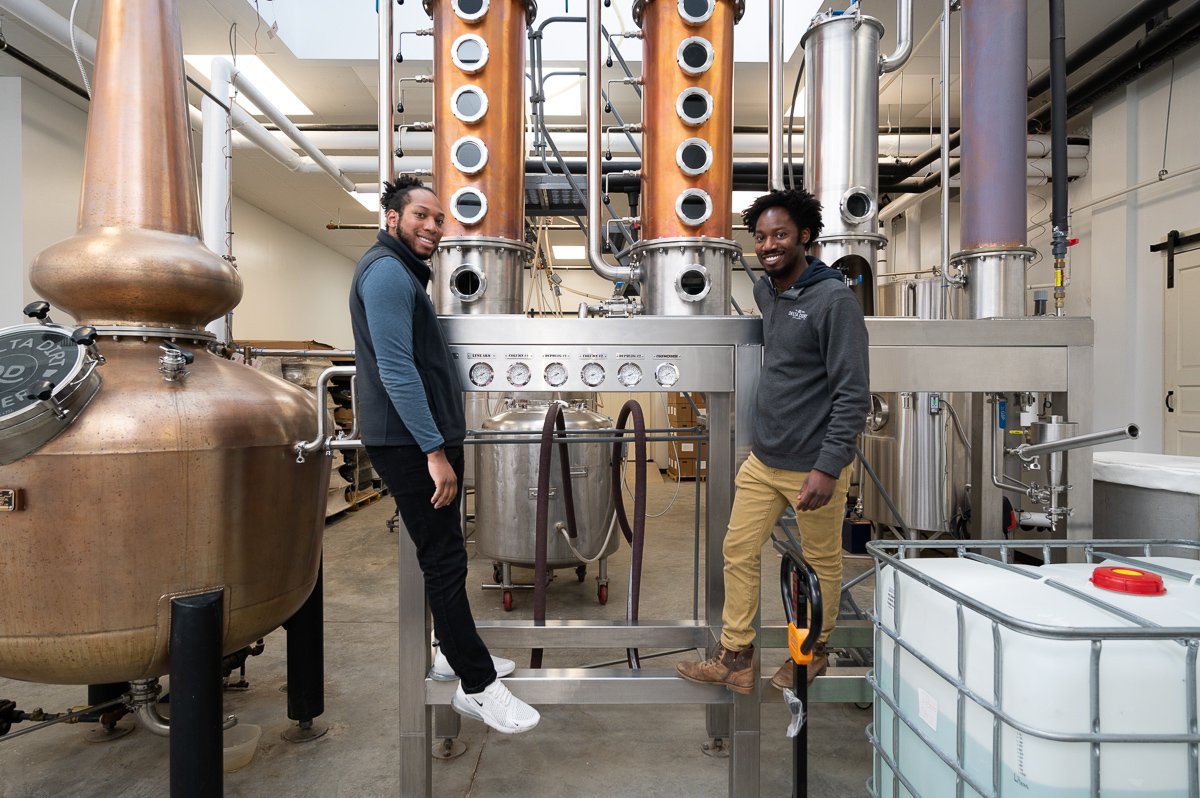 Delta Dirt Distillery, Arkansas’s first and only Black-owned vodka distillery, sits on a corner of Cherry Street in Helena-West Helena, Arkansas. It shines against the rest of the downtown strip, where boarded and darkened windows list businesses that are no longer there, like a Malco theater that lies abandoned.

Inside the Delta Dirt Distillery, nearly every surface and decoration tell a story. In a corner of the taproom sits a moonshine jar with cotton sprigs poking out of it; the jar is accompanied by a picture of a sharply dressed man named UD Williams (more on his story later). Behind the bar is a ceiling-to-floor window; the silver and copper Wonka-like machinery peeping through it was imported from Italy and Canada. The fine, decorative details of the distillery invite questions that the Williamses love to answer for visitors. 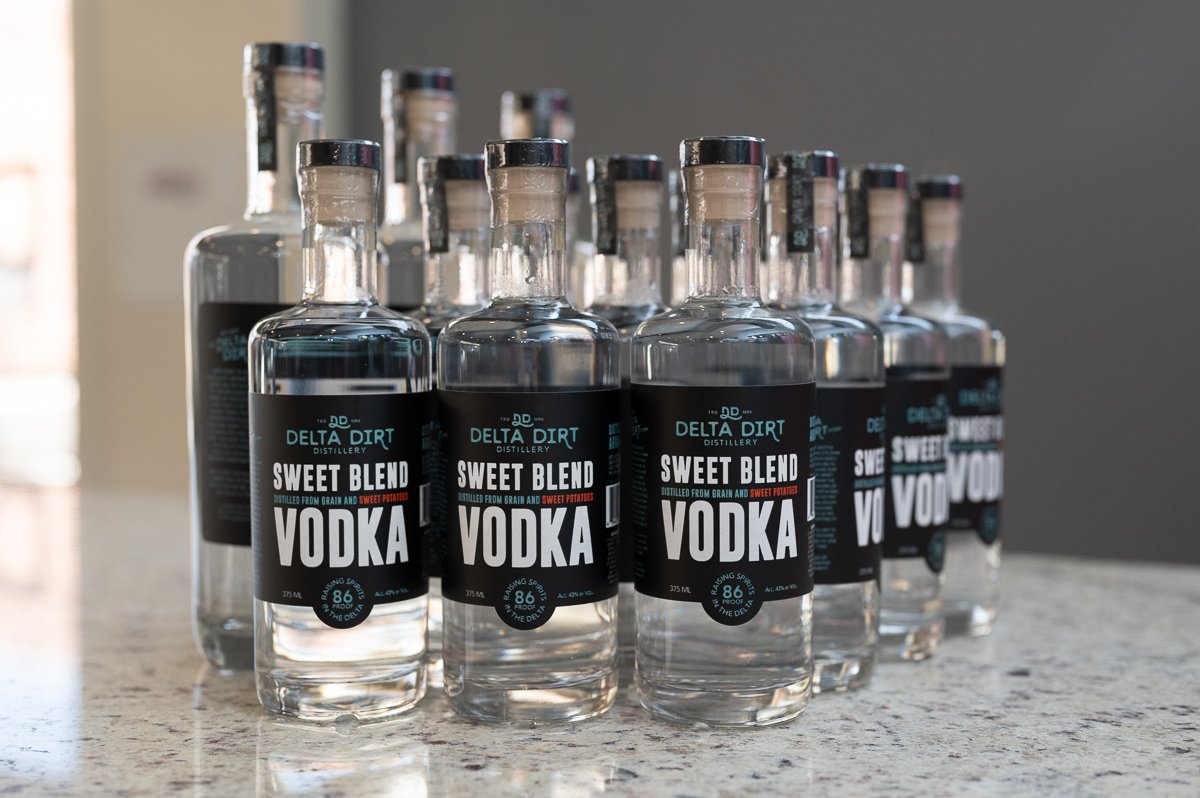 The distillery, which opened in April 2021, is home to a gluten-free, 86-proof Sweet Blend vodka, made of corn and sweet potatoes from the family farm of distillery owner Harvey Williams. As a shot, the vodka is smooth and refreshing. There is no strong aftertaste, and the “bite” is slightly sweet. As a mixed drink, it pairs well with fruit, soda, espresso, chocolate liqueur, and more.

The Williams family—Harvey (father), Donna (mother), Thomas and Donovan (brothers), and TaHara (sister)—have Arkansas roots dating back at least four generations. Harvey grew up in Rondo, while Donna grew up in Marianna. Helena (which later consolidated with West Helena to form Helena-West Helena) was the place to go for family needs, Harvey said.

“Downtown was the place to come and shop for everything. My dad and granddad bought lawnmowers, chainsaws, and shoes from down here,” he said. “My mom would bring us down here. So this was ‘town’ for us.”

The area has changed a lot in the last several decades, though. According to the U.S. census, this small town in The Natural State has a population of 9,519 (as of April 2020), a median household income of $22,177, and a 45 percent poverty rate.

Delta Dirt Distillery is an investment not only in the future of the Williams family, but in Helena-West Helena. 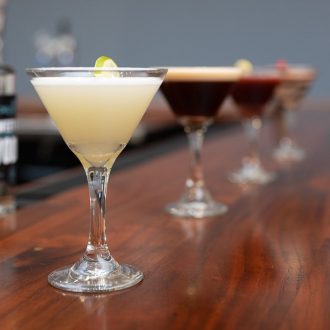 The family intentionally placed the distillery in an area that was disinvested as a result of a major employer leaving town.

When the jobs left, so did some of the population, explained Harvey. Post-college and as they started a family, Harvey and Donna worked all over the country before coming back to Arkansas. Donna works in IT, and Harvey is retired from the food business. A 30-year career with major brands like Tyson and Sara Lee prepared him for his own venture.

When the Williamses approached banks to get a loan to start their business, they had some issues.

But the Williams family has a history of making things happen, dating back to UD Williams, whose photo is displayed in the distillery. UD was Harvey’s grandfather and the purchaser of the family farm. UD’s father, Papa Joe, was a sharecropper on the land, and so was UD after him.

Harvey said he never knew the history of the moonshine jar until recently, when an aunt told him that UD made and sold moonshine to help save money to purchase the farm. He also, in a bold and risky endeavor, sold cotton from the farm to purchasers outside of the owners.

“He could have been hanged if he was caught,” Harvey said.

Approximately 30 miles from the Williams farm in Rondo is Elaine, home of the 1919 Elaine Massacre. Tired of being exploited by the white landowners they worked for with astronomical debt and inflated numbers, the sharecroppers of Elaine hired a lawyer to demand a fair share of the profits from their labor. When white people learned of the organizers, they fired shots into the church they met in; the shots were returned, resulting in the death of one white man. In retaliation, soldiers and local law enforcement gathered, and the resulting violence led to the murder of more than 200 Black men, women, and children.

Not long after UD purchased the farm, he destroyed the moonshine equipment and never made moonshine again. Harvey said there is no recipe—written or oral—for it, and the only remaining evidence is the jug. (Today the 86-proof Sweet Blend vodka is made with such potency to commemorate the 86-acre farm.) 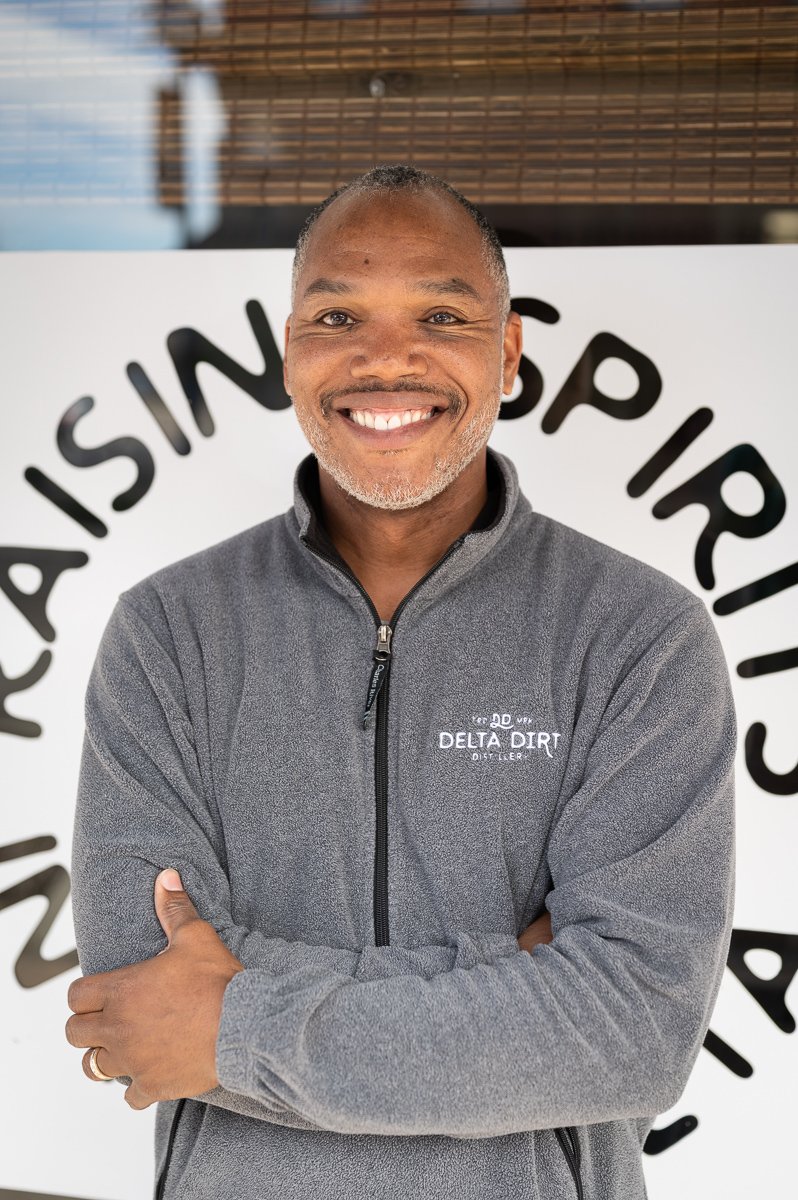 When Harvey and his family were unable to get a bank loan to start the distillery, they relied on their inherited resilience—and came up with the $900,000 investment themselves.

Today they make about 50 cases (600 bottles) of vodka per week. They sell out of the distillery and in more than 200 liquor stores across Arkansas; they plan to expand to other states, including Tennessee, Mississippi, and Texas.

The Williamses have also purchased the two buildings next to the distillery and are preparing to open a restaurant in the next few months. 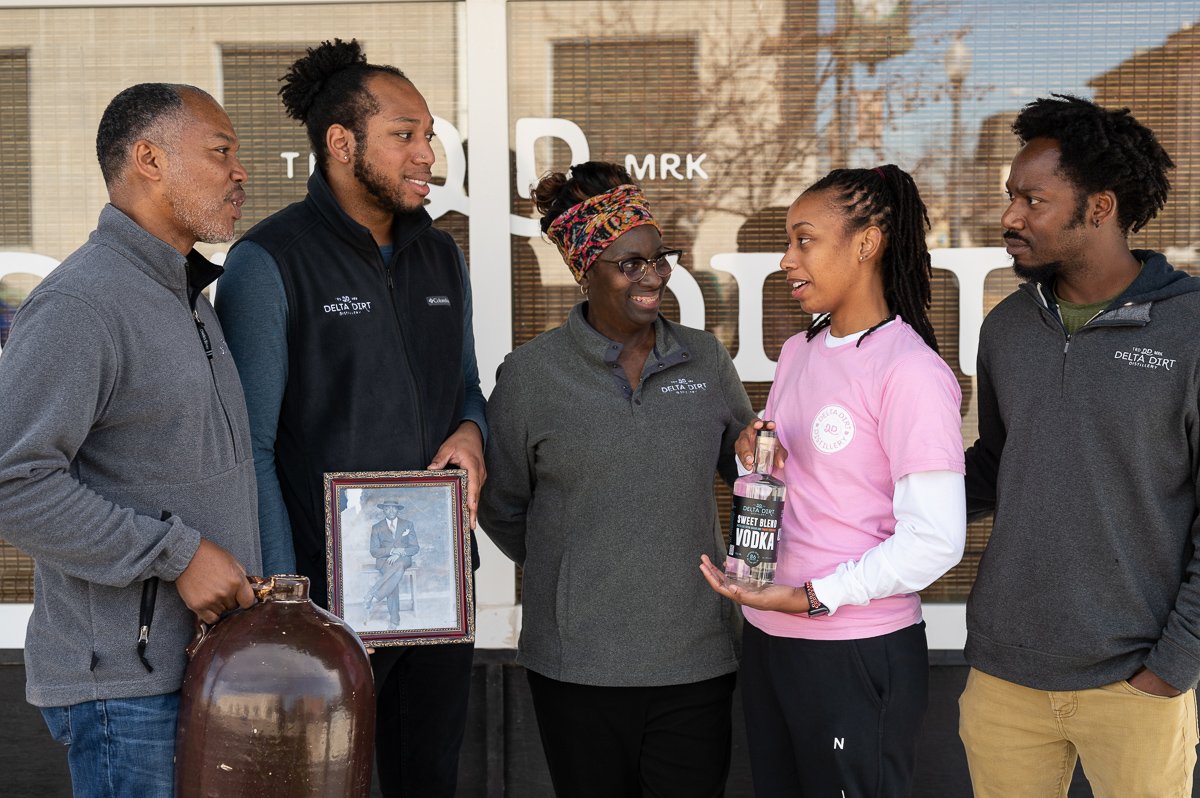 The Science of It

Each family member contributes to the success of Delta Dirt.

While still working fulltime in IT, at the distillery Donna primarily serves as a support system for Harvey. Thomas was on his way to medical school post-undergraduate but switched gears and attended Moonshine University (yes, that’s the actual name of the school in Louisville, Kentucky) to become a master distiller. Donovan is training under him until he can attend Moonshine. TaHara has an 11-year career with the Navy as an Electrician’s Mate Nuclear but helps behind the bar when she is home.

Thomas knows the science behind the Delta Dirt brew. He took the chemistry components of his premed education and applied them to help develop the recipe for the Sweet Blend vodka.

“On a very basic level, we’re taking the starch that’s found in those grains (or sweet potato in our instance) and breaking that down to a very simple sugar,” Thomas said. “That very simple sugar is then eaten by yeast, and the byproduct of that is alcohol.”

After that process, Thomas distills the product. This removes unwanted byproducts of fermentation and results in a “very high-proof alcohol,” which he tinkers with to get to exactly 86 proof.

Eventually, the Williamses plan to release a bourbon and gin.

To taste the sweet potato vodka, visitors have come from Louisiana, California, Kentucky, Texas, Tennessee, New York, Mississippi, and more. Donna says the visitors are one of her favorite parts of the business—and the most challenging.

“That’s probably been the best and the worst challenge—dealing with people, dealing with the public,” she said. “People are great, but they have these misconceptions of what we have to offer. We have people that don’t want to come because they don’t drink. But [the tour] is not about the drink; it’s about the experience. Come, do the tour, and understand how this works.”

Donna appreciates the diversity of the crowd the distillery draws and loves to hear that people feel welcome in the Delta Dirt space.

“You have people that come in and say, ‘I’m just running in to have a drink,’ and three hours later they’re still here,” she said.

“We see young, old, black, white, and pink. And they come in and are allowed to be themselves. Helena needs more places like that.”

Erica Horton is a freelance journalist that loves to learn and write about almost anything.
@howtoloveanerica

Chip Chockley, an attorney by day, has been a professional photographer since 2008. Things that make him happy include tacos, mai tais, and his wife and kids. @chipchockley

Master of Her Pit