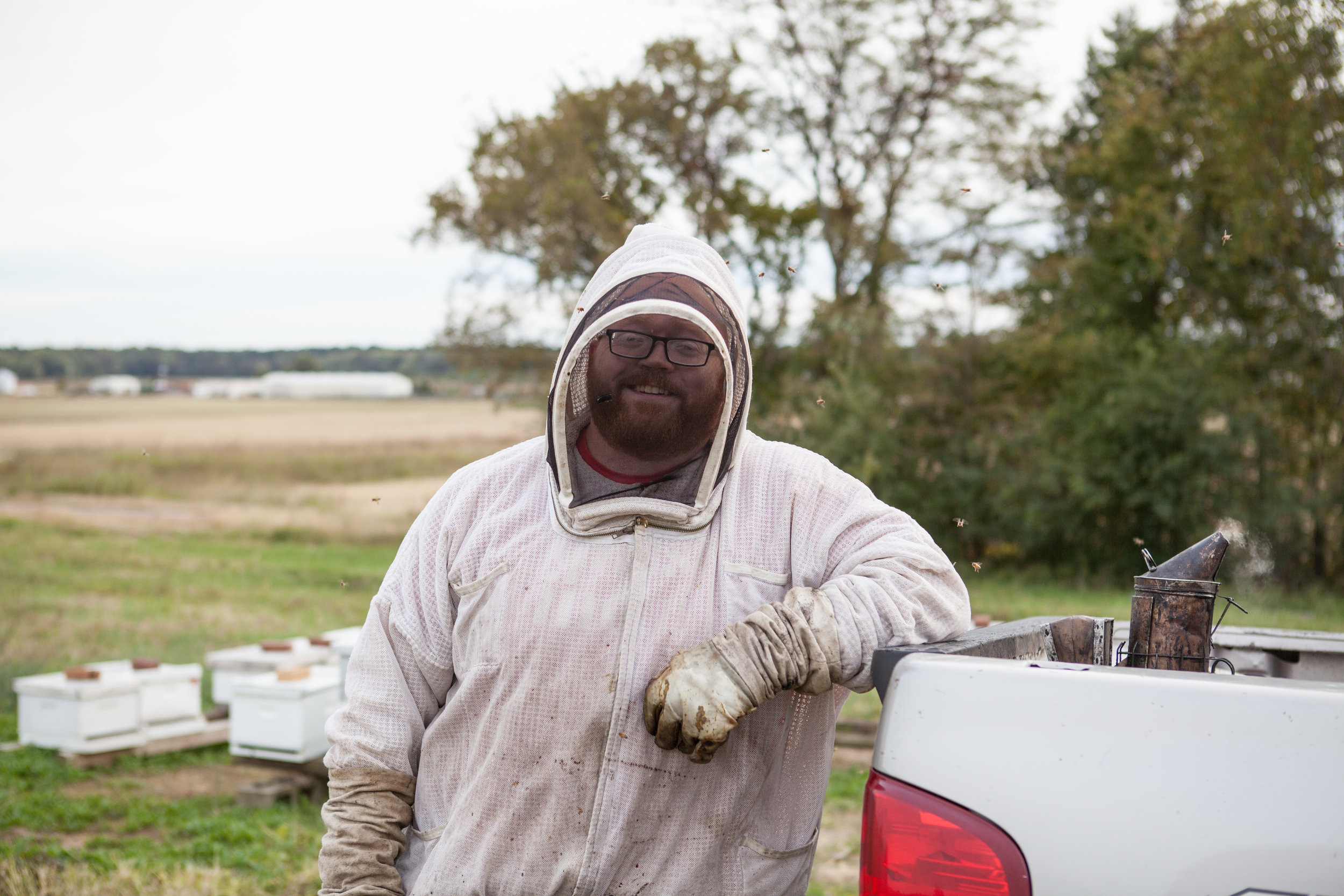 Staring into the eyes of a honeybee is not as glamorous as most may think.

They’re tough. Even protective. But most notably, they sting! Just ask Gus Mitchell, a local beekeeper who maintains around 120 beehives in the Mid-South, including Tennessee and Arkansas. 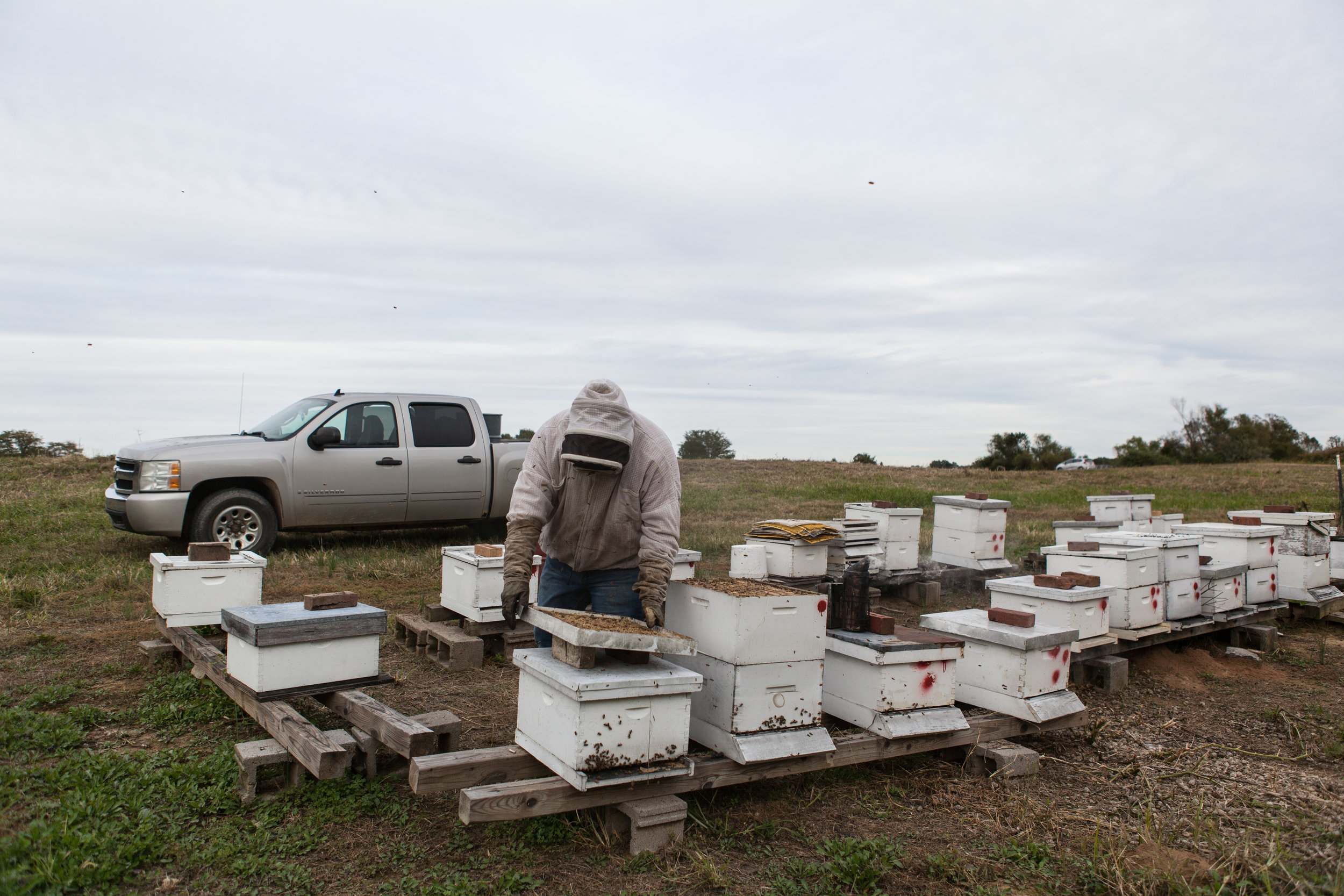 Gus’s day begins at sunrise as he suits up in white armor with a round hood and netted veil. The suit’s mesh fabric helps keep body temperatures down in the Southern climate that sometimes creeps past 100 degree temperatures. Traveling to his multiple apiaries is certainly no walk in the park and proves to be quite challenging. Most times, Gus has to walk a nice distance through fields and farmlands with grass gaping in the form of scarecrows, while the drenching heat invites his sweat glands to pour out profusely along the way. 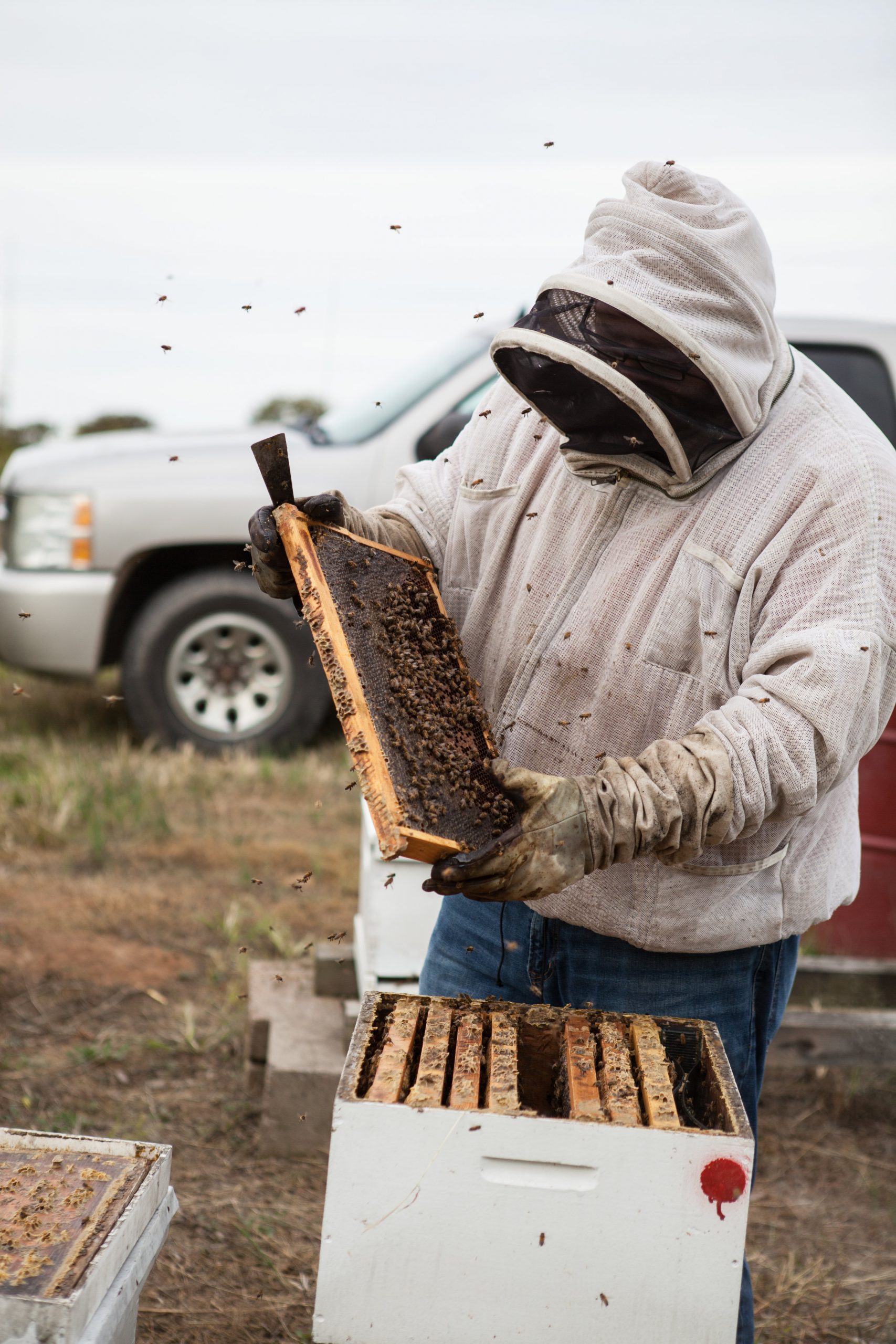 not to mention multiple bee stings, amid building, grooming and harvesting from a colony of bees that produces what most consider to be their favorite natural sweetener—honey.

Gus spent most of his adult life working on drilling rigs and began honing his craft of beekeeping in his mid-twenties. “I would have a lot of time off, so I really needed a hobby, and after hearing my great grandfather tell stories of how he kept bees, it really made me want to try it,” says Gus. 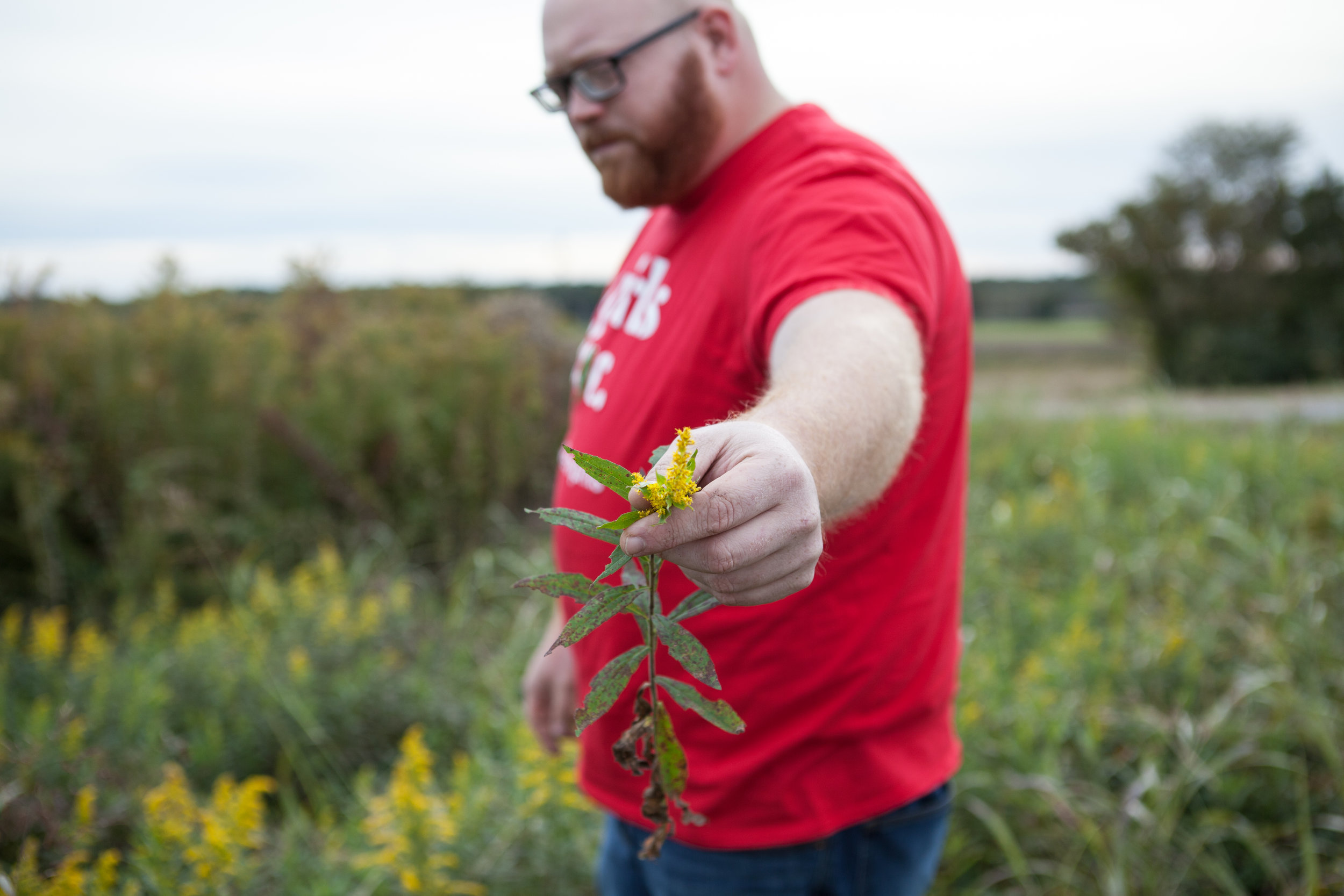 Online research was the first step in Gus’s beekeeping studies, and from there, his first dive into forming an apiary began with ordering packaged bees, which later died. Once the oil industry took a downturn in 2016, he made the decision to move to the Memphis area, leaving behind what was considered one of the most dangerous professions with extreme hours and days away from family.

Gus was determined, and blessed to have good mentors. After driving around his new community trying to spot any visible beehives, asking if beekeepers were interested in helping him out, there was one “older fella” who was receptive to his inquiry. “He took me on and taught me quite a bit,” said Gus, with evident esteem for his mentor. “He had a lot of beekeeping friends who were all older and needed help, so I offered labor for learning.” 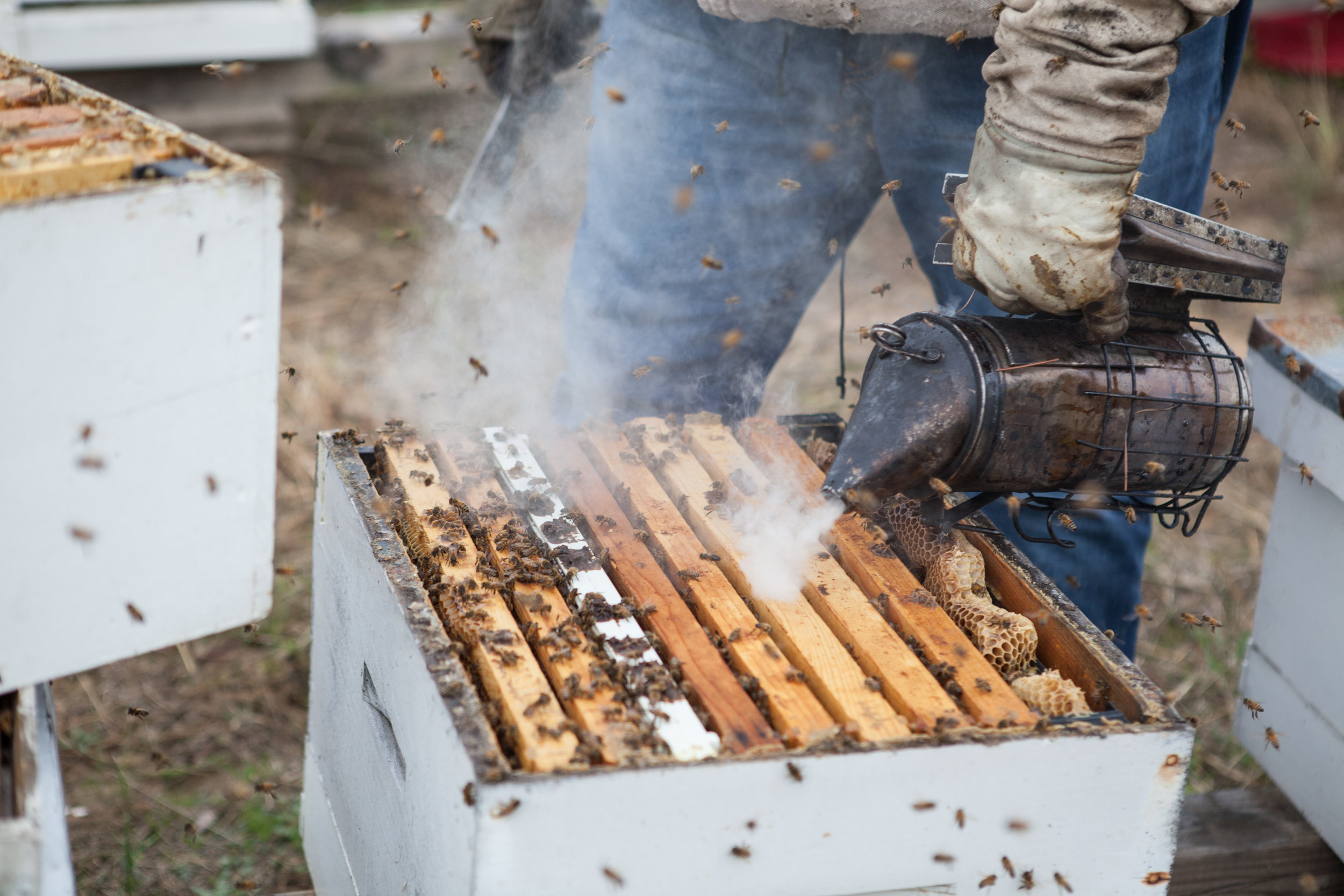 What started as a simple hobby became a profitable passion and business for him.

Gus founded Cranes Nest River Apiaries, the only certified naturally grown apiary in the Memphis area offering local raw, unfiltered honey. His company produces treatment-free processing conditions for all its beehives—simply put, no pesticides, antibiotics or other chemical manipulations to the bees or hives. 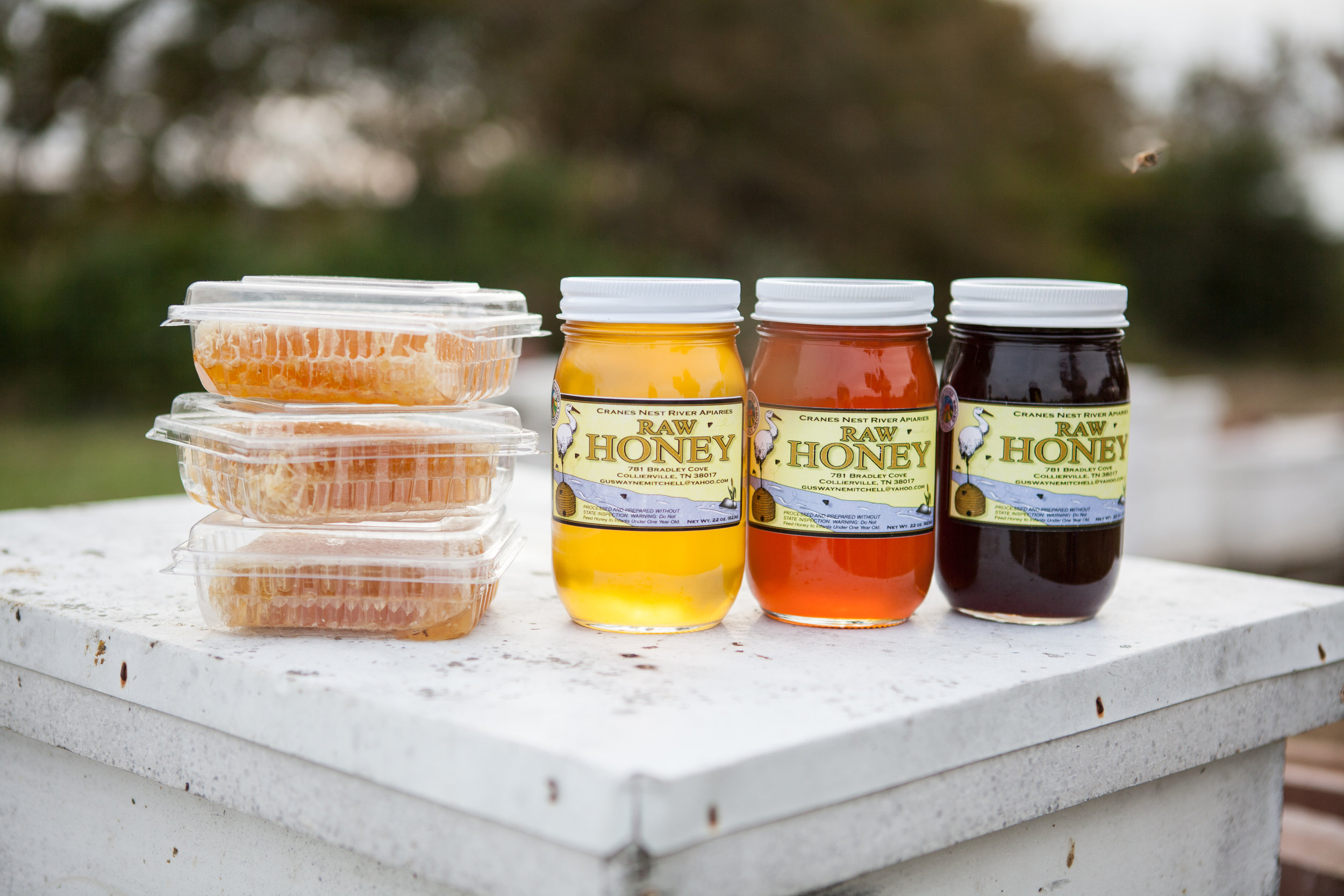 Gus has three apiaries in Collierville, one in West Memphis, another on Whitten Farms in Tyronza, Arkansas, and one housed on the youth farm of Girls Inc. in the Frayser community of Memphis.

His heart holds dearly the Girls Inc. youth farm, as it was the first place he stationed beehives when moving to Memphis.

He started up the apiary program there and has been managing it for almost three years now, teaching basic and intermediate beekeeping, as well as honey harvesting. “I find it to be very rewarding, and really enjoy the farm, especially being in the Frayser community, which has often been considered a food desert,” says Gus.

His hope is that young people will become more knowledgeable and appreciate the labor of beekeeping. 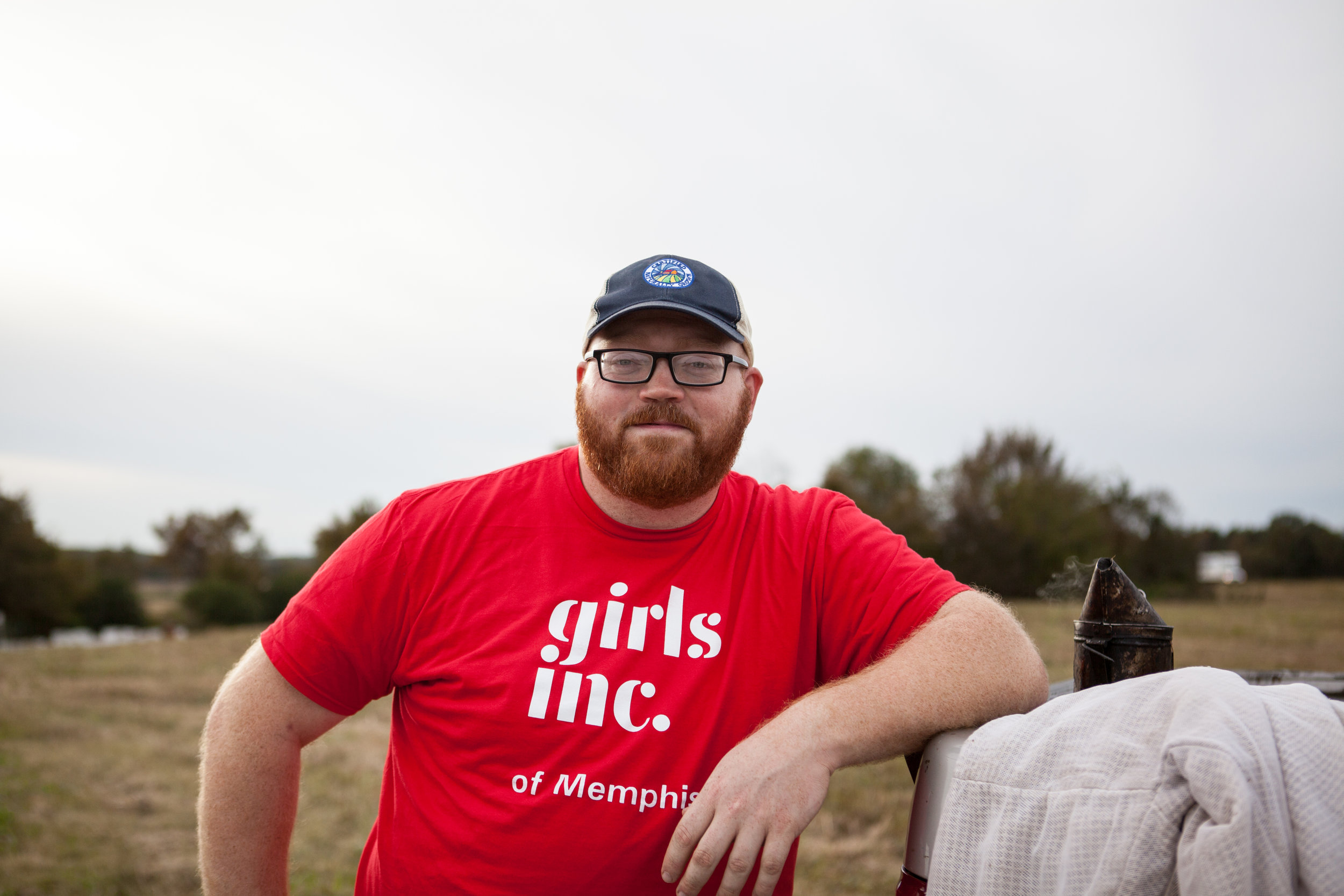 Gus also manages the Memphis Area Beekeepers Association apiary that resides at Agricenter International. The club runs a small apiary of 25 beehives, where he harvests honey for sale at events such as the Pink Palace Crafts Fair and Germantown Festival, and also conducts classes for club members during field days. As owner of Cranes Nest River Apiaries, Gus works with farmers by utilizing their land to create apiaries, and in return, their fields benefit from pollination. He raises bees and queens at his Collierville apiaries, while maintaining his other locations on a 10-day rotation period of inspection. 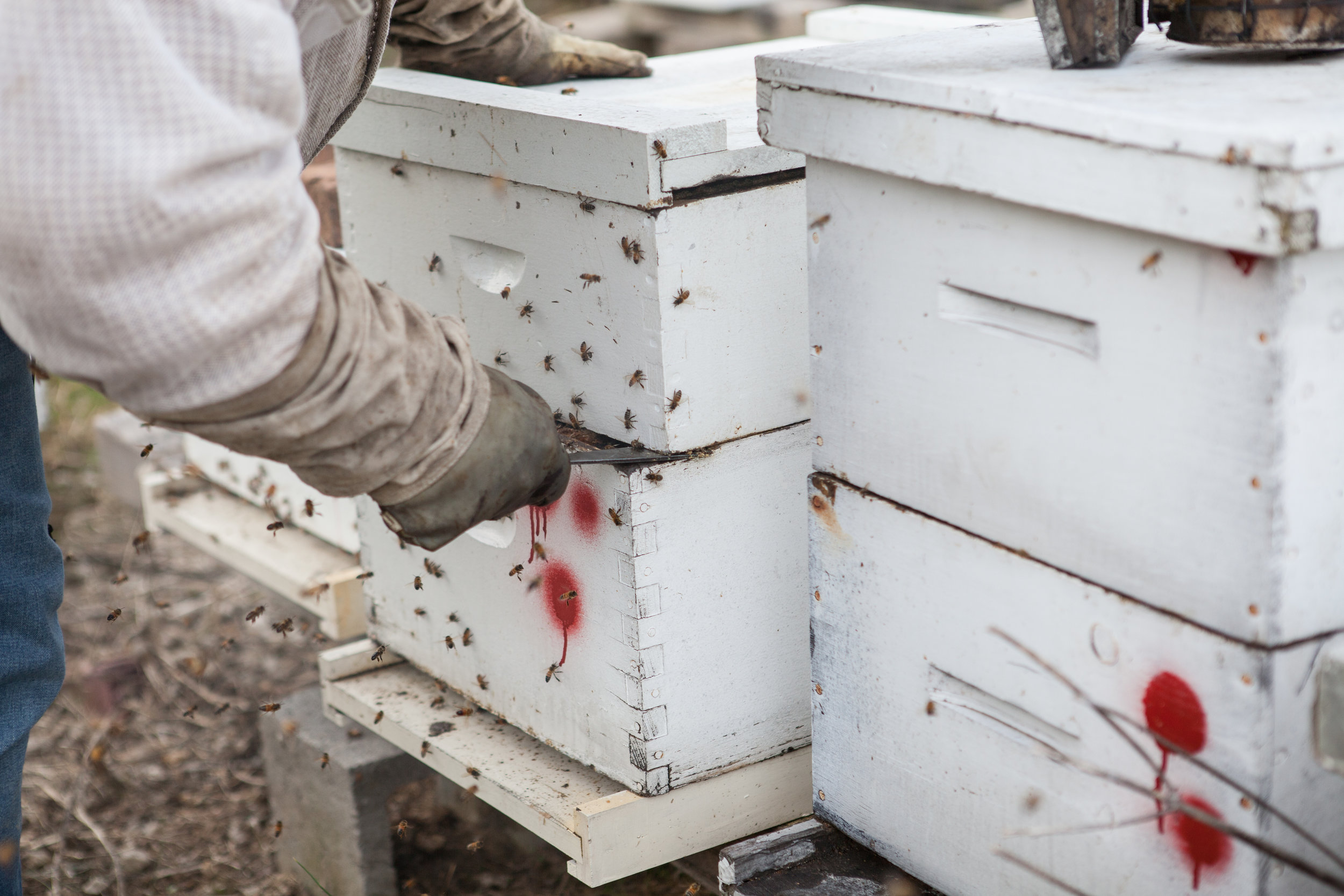 During honey season, when bees are at their peak, Gus can produce a surplus of honey from late May to early September. In the winter months, when the cooler temps keep colonies clustered in hives and working less, he spends time painting boxes, repairing equipment and refining beeswax. Once temperatures warm up over 40 degrees, the honeybees take a much-needed cleansing flight—they poop across the fields. 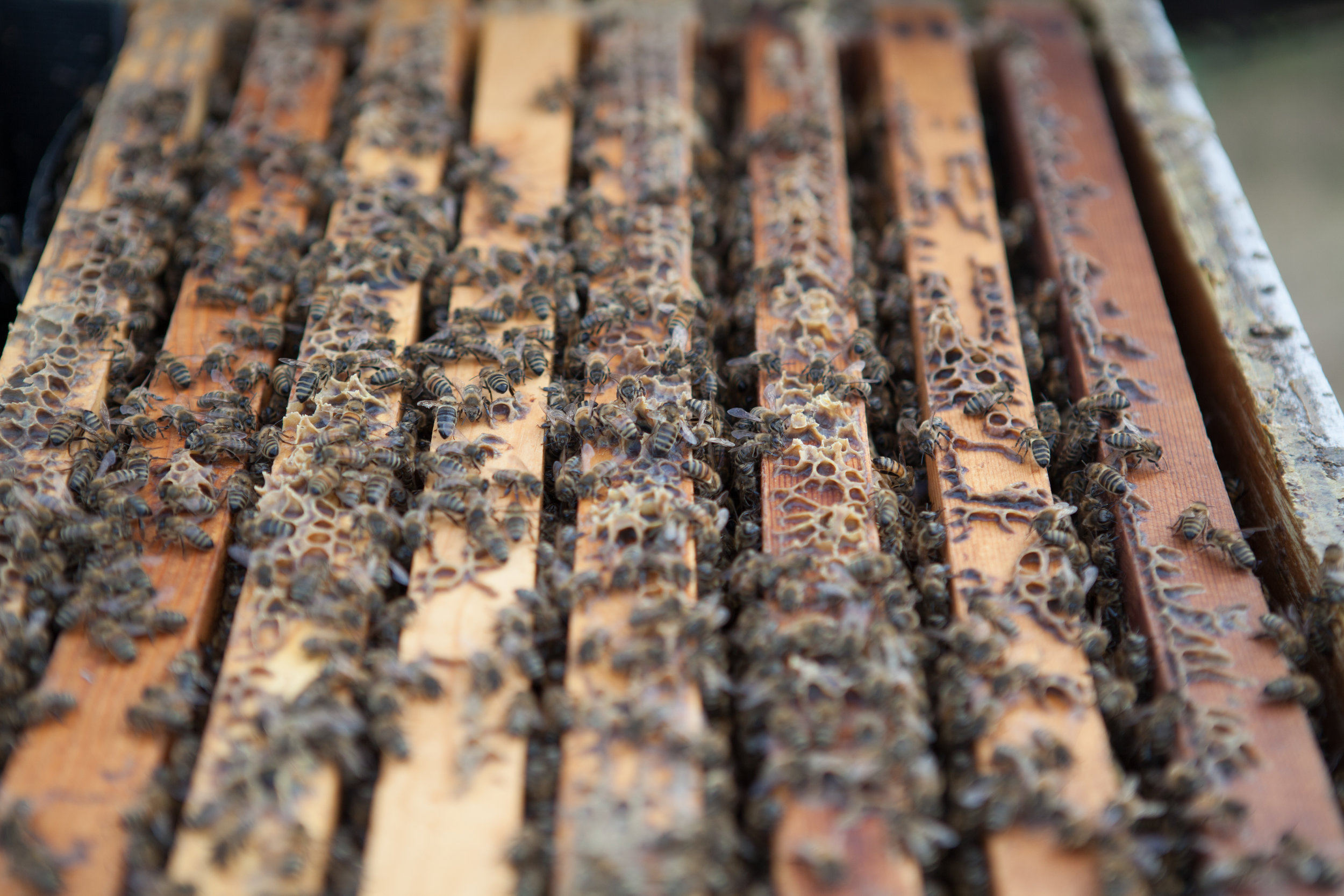 Depending on the season, Gus can harvest a variety of natural flavors of honey, based on the nectar sources that bees feed on.

The worker bee carries the nectar back to the hive to feed the brood and queen. “We live in an agricultural area, so if you have good summer yards with soybean, cotton and sunflowers, you can produce a surplus of honey in the summer,” explains Gus. “In the fall, asters and goldenrod flowers produce a good amount of honey.” Spring honey is completely different from fall, depending on the floral source. Early spring honey is black locust, which is super fragrant and makes a water-white honey. Or, if from tulip poplar trees, the consistency is a darker, robust, molasses-like honey. 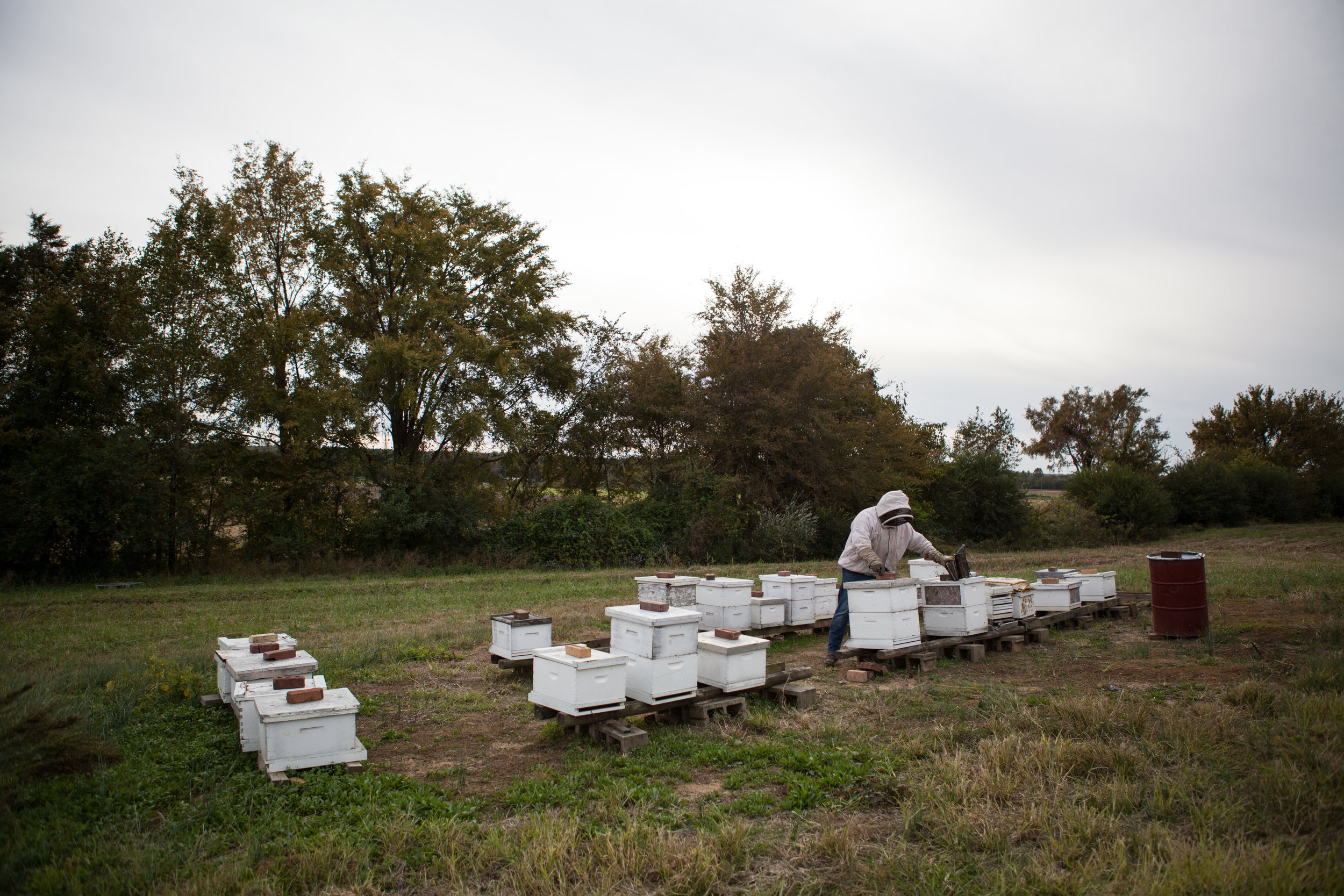 “This part of the country is so wonderfully rich;

we get amazing summer flows that produce a more consistent honey flavor year to year. Therefore, it can be difficult to isolate varietals here in the Memphis area, because the land is so rich and prime,” says Gus.

Gus describes a local favorite: “Typically it’s a lovely golden honey that’s mild and sweet. It comes from summer wildflowers mixed with nectar from the abundant cotton and soybean blooming in our area at that time. When sampling flavors with customers, this flavor profile is what’s ingrained in their memory.”

Comb honey has also been a popular seller, which Gus attributes to its nostalgia factor. Cranes Nest River Apiaries also sells bulk honey to other local beekeepers. Gus’s son Dominick, now 12 years old, started at an early age going on inspections with his dad, but he’s not quite sure yet if he wants the life of a beekeeper. Gus is studying to become a nurse and will work alongside his wife, who’s a nurse practitioner, while continuing his beekeeping lifestyle and business.

You can shop Cranes Nest River Apiaries naturally grown raw honey at SingBean Market, an online farmer’s market; Trolley Stop Market; or by visiting them on Facebook and Instagram.

You can find Cranes Nest River Apiaries at the 2019 Craft Food and Wine Festival on June 23rd. Buy your tickets here.

Erika Cain is a communications vet with chops in writing, public relations, graphic design, TV, radio and brand strategy. She is a skilled storyteller and has been a trusted adviser to executives and companies for almost two decades. Erika founded GIRL 24, a business mentoring initiative to help build a culture of gifted and ingenious female leaders. She is a spouse, mom, speaker, community volunteer and member of Junior League, and loves dissecting brands.

A Friendship Founded on Food