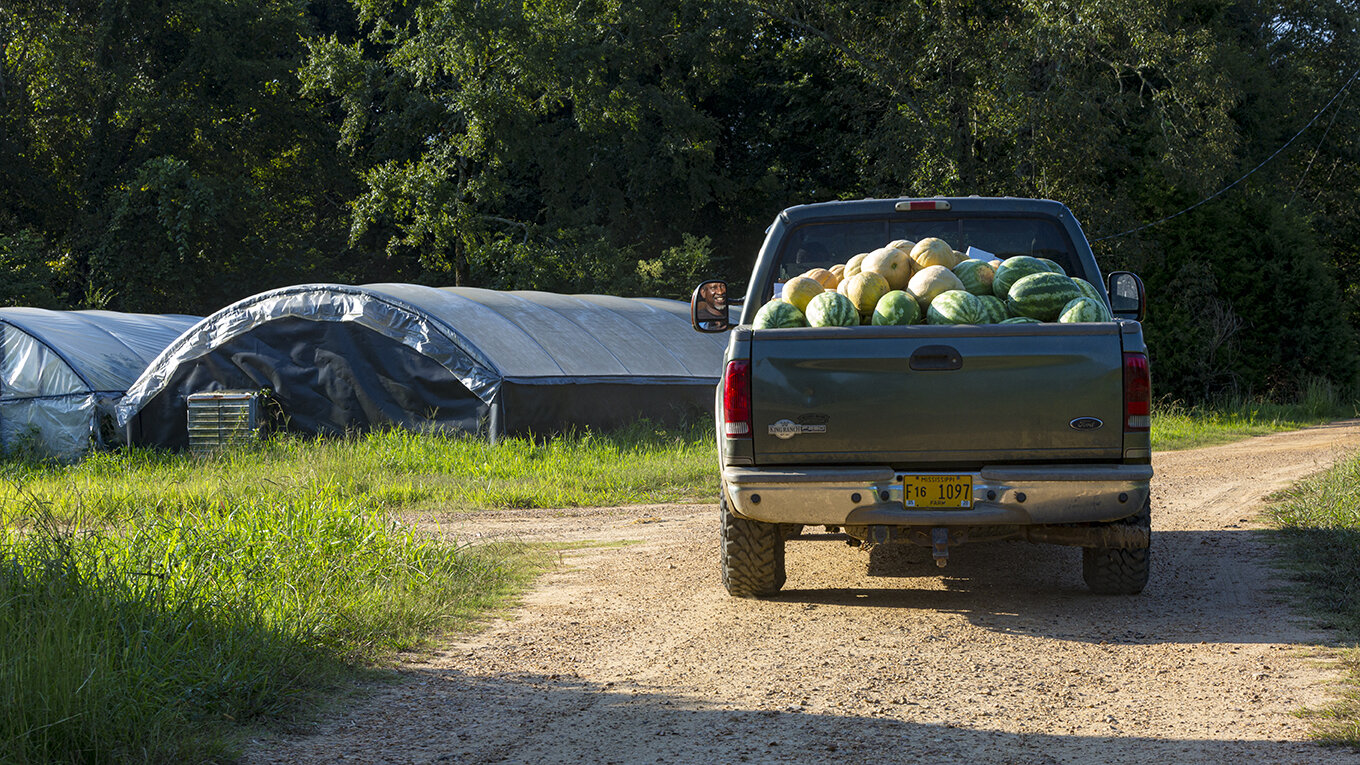 Standing amid 145 acres of pasture feels quite different from glancing at it pinned on Google Maps.

The grounds at Richardson Farms seem to go on for miles, beginning at a two-lane roadway and intersecting somewhere in the blue skies. With multiple fields of farmland stretched across Tate County, Mississippi, Steve Richardson has planted a major investment into the cultivation of what has always been a widely respected platform of labor—small farming. 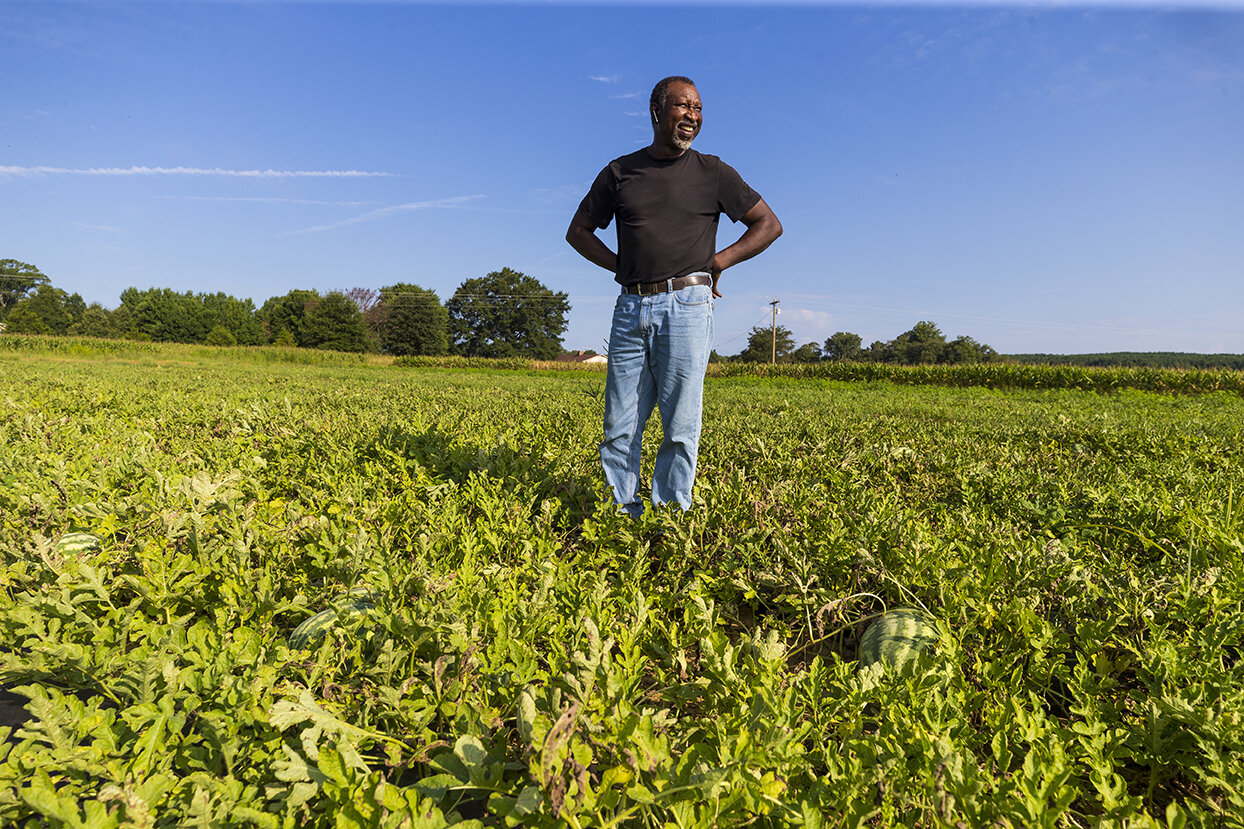 Before Richardson Farms was rooted, Steve began farming as a little lad when he had to share responsibilities on his family’s farm in Edwards, Mississippi. While his dad worked on the road, he, his mom, and his 12 siblings ran the farm—planting cotton and corn and raising cattle and hogs. “We always planted our own food,” says Steve. “We had gardens and truck patches.”

At that time, a company moved into nearby Bolton and wanted people to plant cucumbers for their packing shed. Steve’s dad set aside some ground on his farm and planted cucumbers for about two years for the company. He discontinued his services, but Steve acquired one acre of farmland from his dad to seed cucumbers and keep selling to the company. Steve beamed with a smile, sharing, 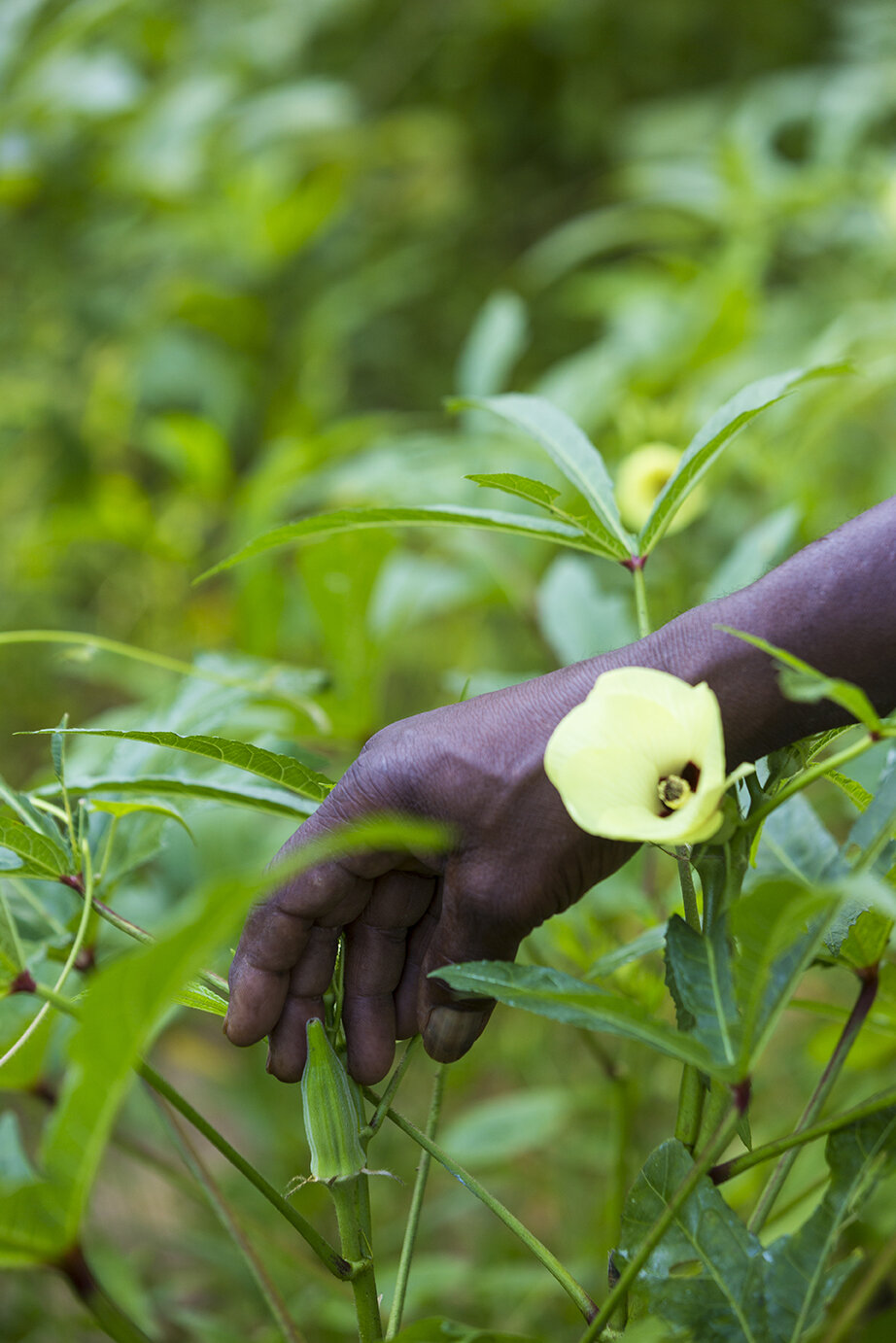 “After selling my cucumbers, I made enough money to buy me a one-rack pulpwood truck when I was 15.”

Now retired from Mississippi State University Extension Service, Steve says he got his start in farm agriculture in Decorah, Iowa, working for a soil conservation service. He later graduated from Alcorn State University and hoped to start at the extension service then, but there was a hiring freeze at the time. “I moved back home and went to West Point, Mississippi, to finish my master’s,” he said.

“When they lifted the freeze, the county agent position became available, so I moved from West Point to Tate County to accept the role as the first African American agent to oversee an entire integrated office in Tate. Back in the day, Negro county agents could only work with Blacks.” 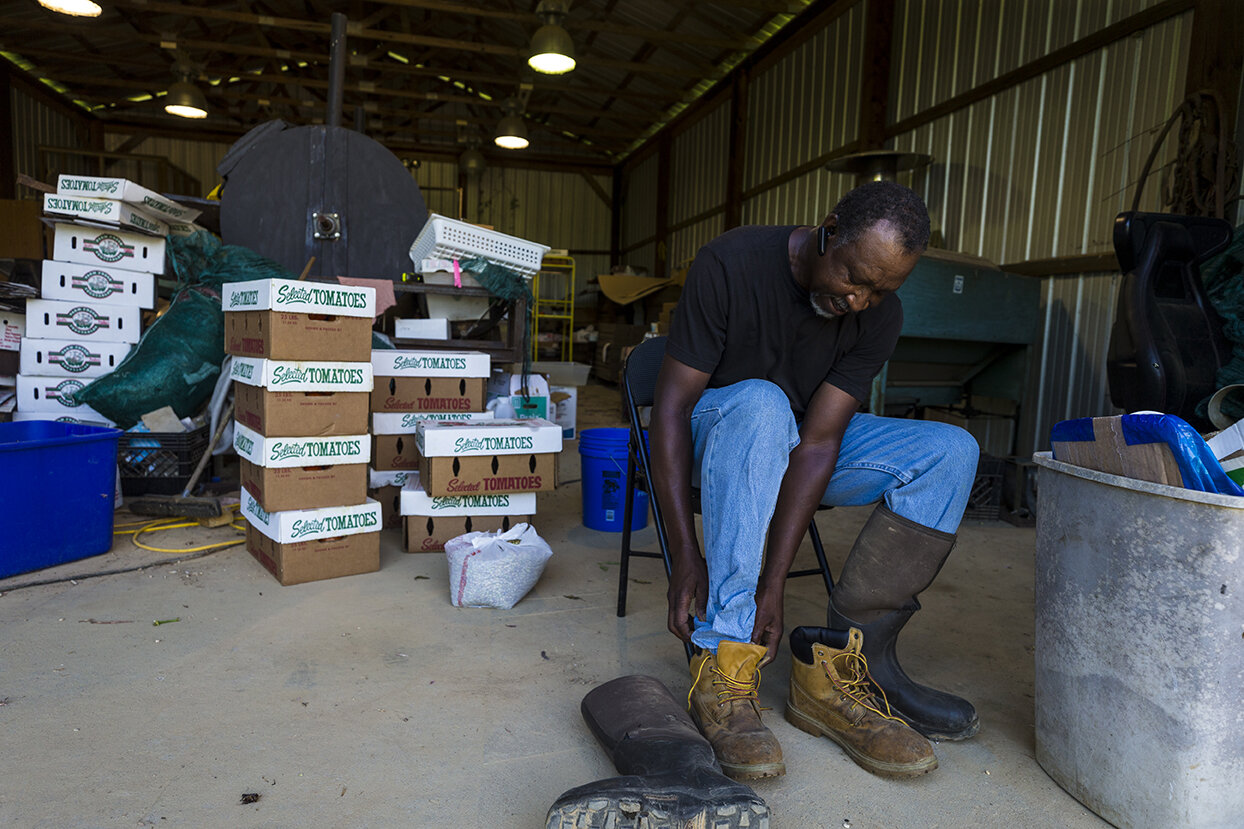 Over the years, Steve has offered hands-on educational workshops, youth programs, and resources to the community and master gardeners. Through his work with Mississippi 4-H, he taught youth how to do everything from barbecuing and sewing to planting and canning foods. In fact, his 4-H teams traveled to Memphis each year for the Mid-South Fair competitions for livestock, poultry, and pork—taking home awards for the poultry and pork barbecue categories.

In 1990, Steve purchased his current land, but not yet with the idea of it becoming Richardson Farms. He started off by planting and selling soybeans and wheat, but they didn’t turn a great profit. After adding plantings for sweet corn, tomatoes, watermelon, and then a little bit of everything, Richardson Farms began producing for the community. 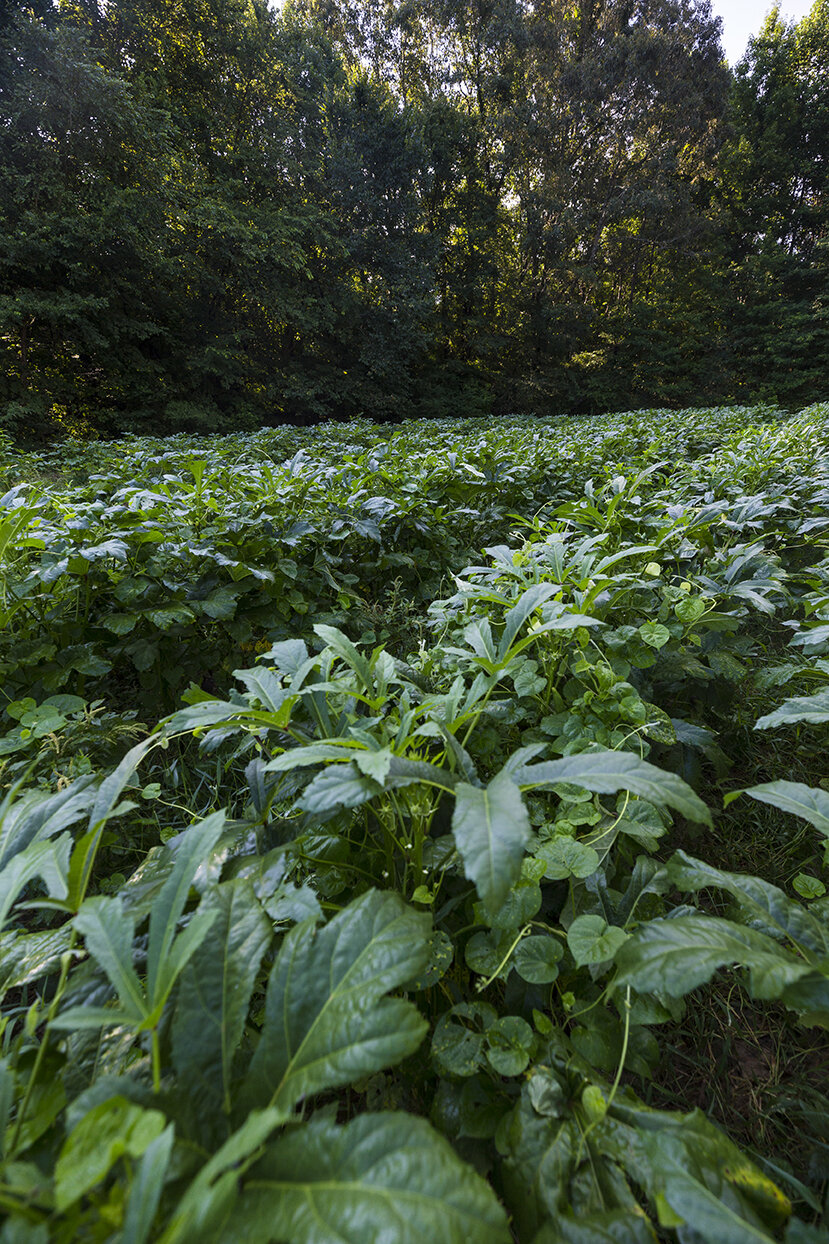 “I started the Tate County Farmers Market in 1989, and it still continues to this day,” Steve remembers. Steve founded and built the market by working with the county board of supervisors—receiving monies to build a shed—while the city chipped in to provide things like restroom facilities and electrical sources. He recruited vendors to set up and sell their produce and even ran an ad in the local paper, taking a poll on whether or not people would buy from a local market. Needless to say, it was an overwhelming yes. 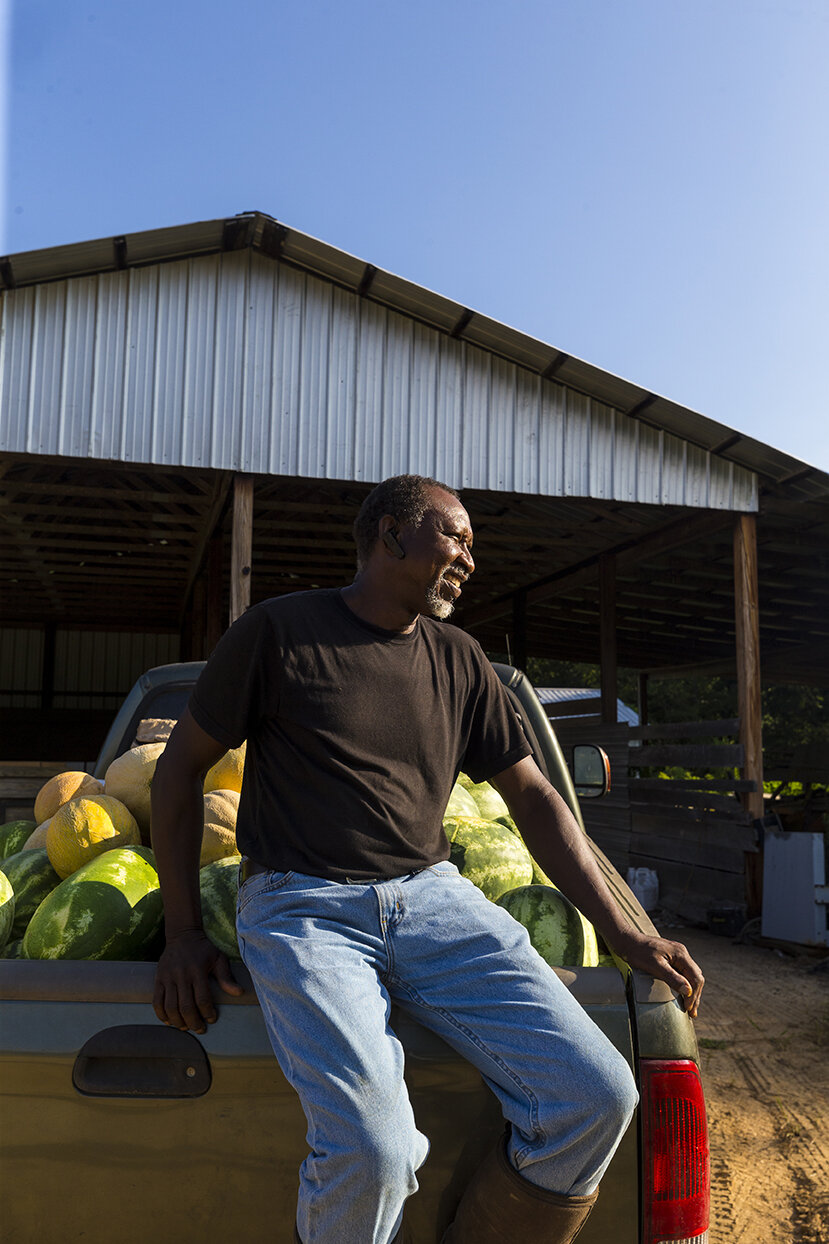 After much success with Tate County Farmers Market, Steve has offered guidance for other markets across the Mid-South, including the Memphis Farmers Market.

Somewhere in between, Steve even found time to run for Mississippi state representative. 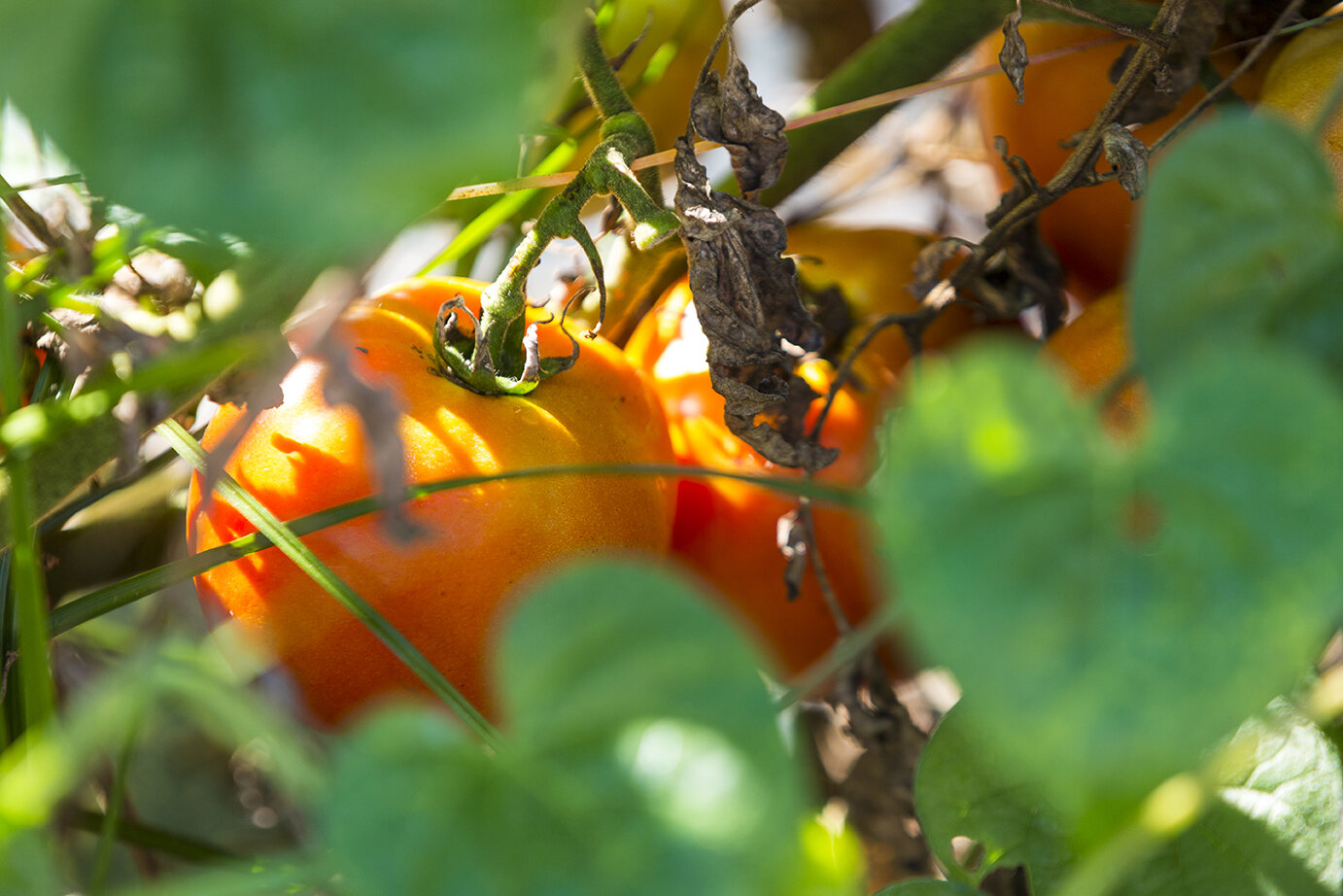 Today, Richardson Farms is best known for its tasty produce and standard of excellence for squash, leeks, snap beans, mustard greens, broccoli, cabbage, cauliflower, zucchini, and bell peppers in seven different varieties—green, yellow, orange, red, chocolate, ivory, and purple. On up the road, Steve rents another 36 acres, where you can find watermelon, cantaloupe, honeydew, field corn, pinkeye purple hull peas, speckled peas, and butter beans, to name a few. While there are no berries on Richardson Farms, Steve is thinking of adding strawberries, figs, and herbs in the future. He owns about 50 heads of cattle on another field adjacent to the farm. 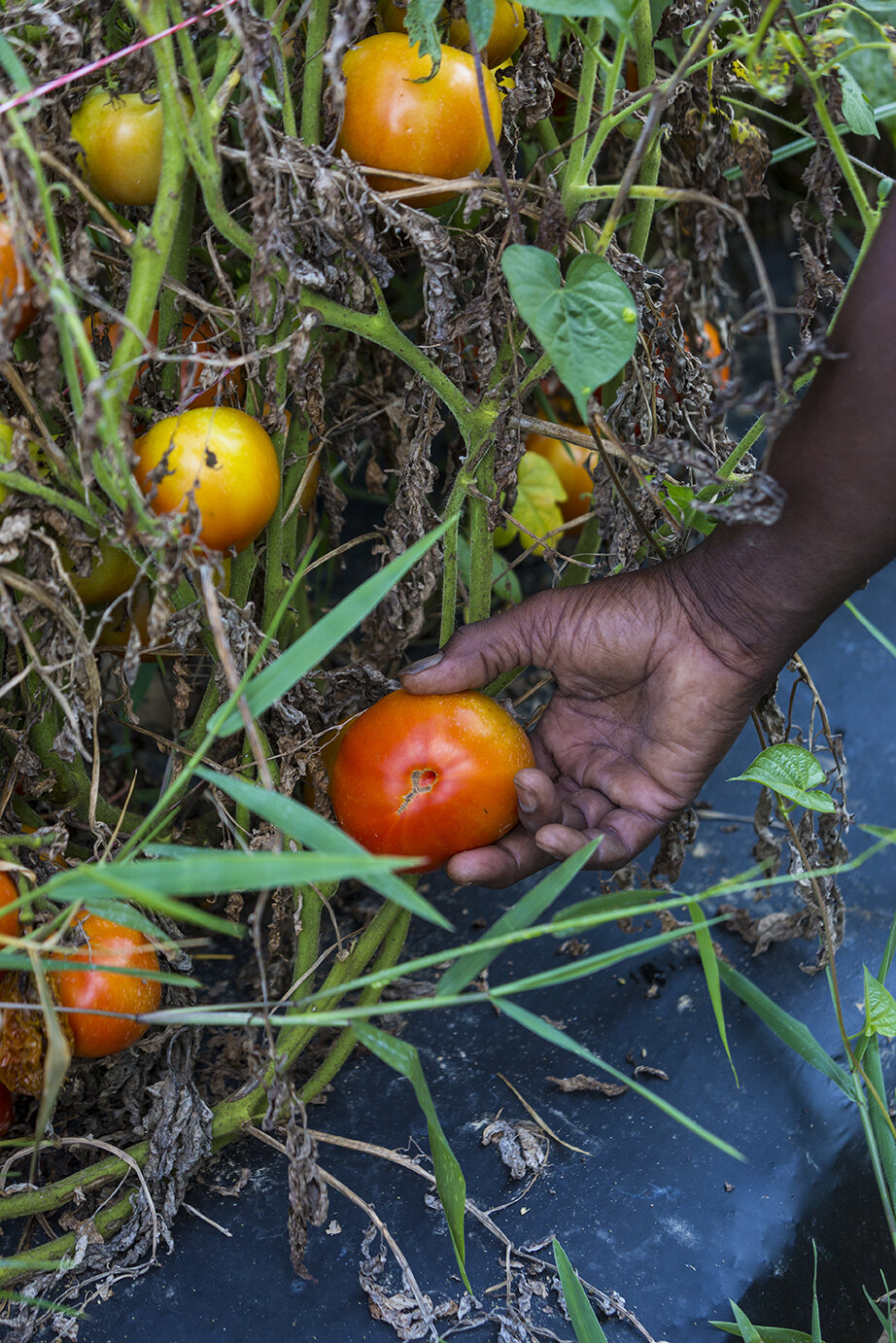 Farming is a full-time lifestyle for Steve. Timing is of the essence for plantings to flourish in appropriate seasons in order to maximize quality offerings to buyers. Planting rotates every three weeks until the last planting in July, keeping him busy the entire day, seven days a week. In addition, Steve grows his own transplants and sells them before the season begins, educating his customers on proper care and treatment.

Cycles, irrigation, plastic-lined rows, and temperature checks all play a role in Steve’s production of colorful fruits, veggies, and other plants. Plantings are made one after another so, each time produce is harvested, another round is seeded. Planting and picking, prepping the bays, and then planting and picking again—a cycle that is nonstop to produce the supply for the high consumer demand. The harvest is so plentiful on the farm that Steve can barely keep up at times without having help—planters, pickers, and groomers. But, that doesn’t diminish his expectations of quality. 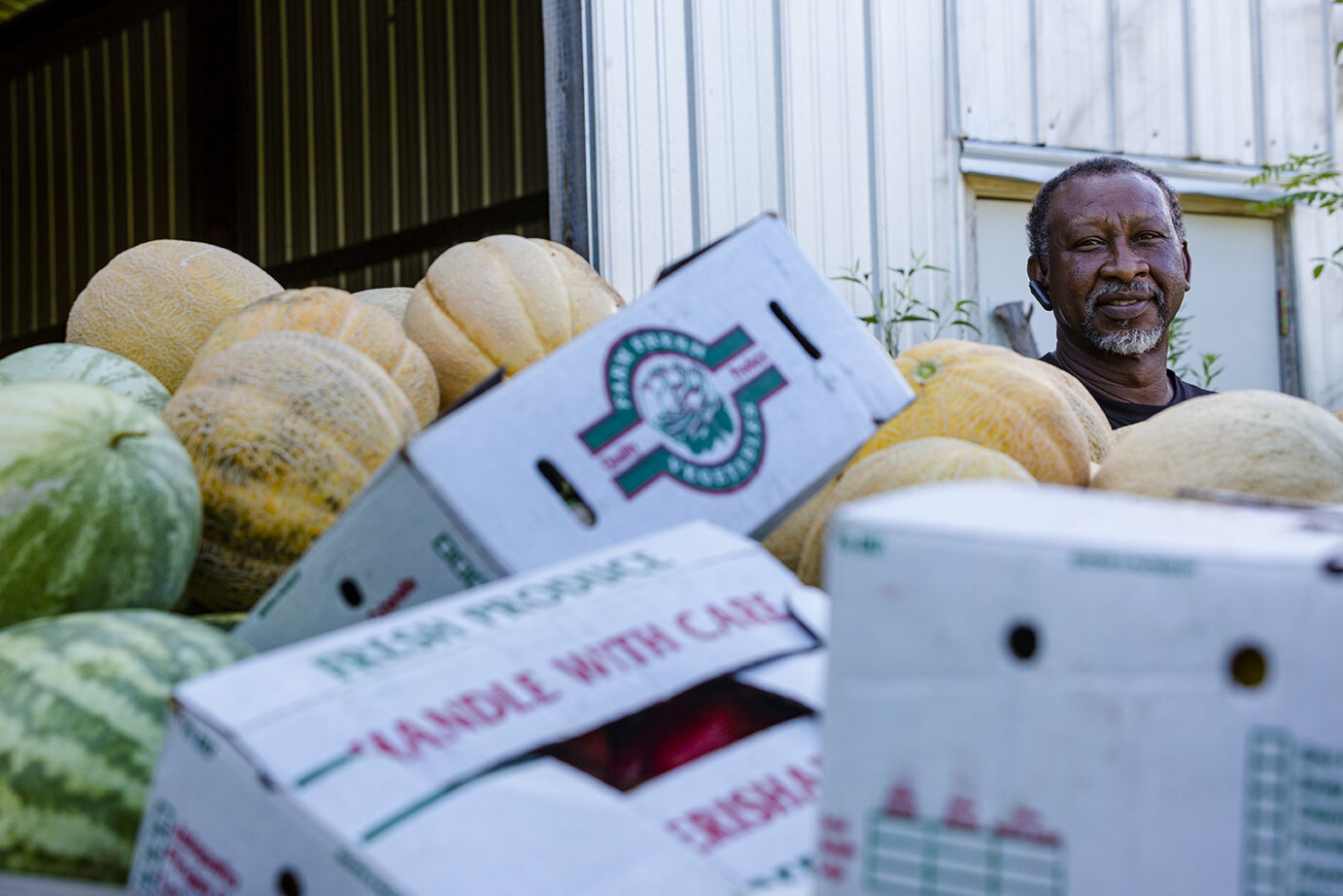 When picking a watermelon for his customers, Steve insists it meet certain criteria, such as the sound it gives when thumping it, the color of its belly, and even the pin curl that connects it to the vine.

Once those criteria have been met, he is ready to present what he considers to be the perfect summertime fruit. Oh, and the cantaloupe and honeydew are so special that he refers to them by nicknames, mostly inspired by friendships. 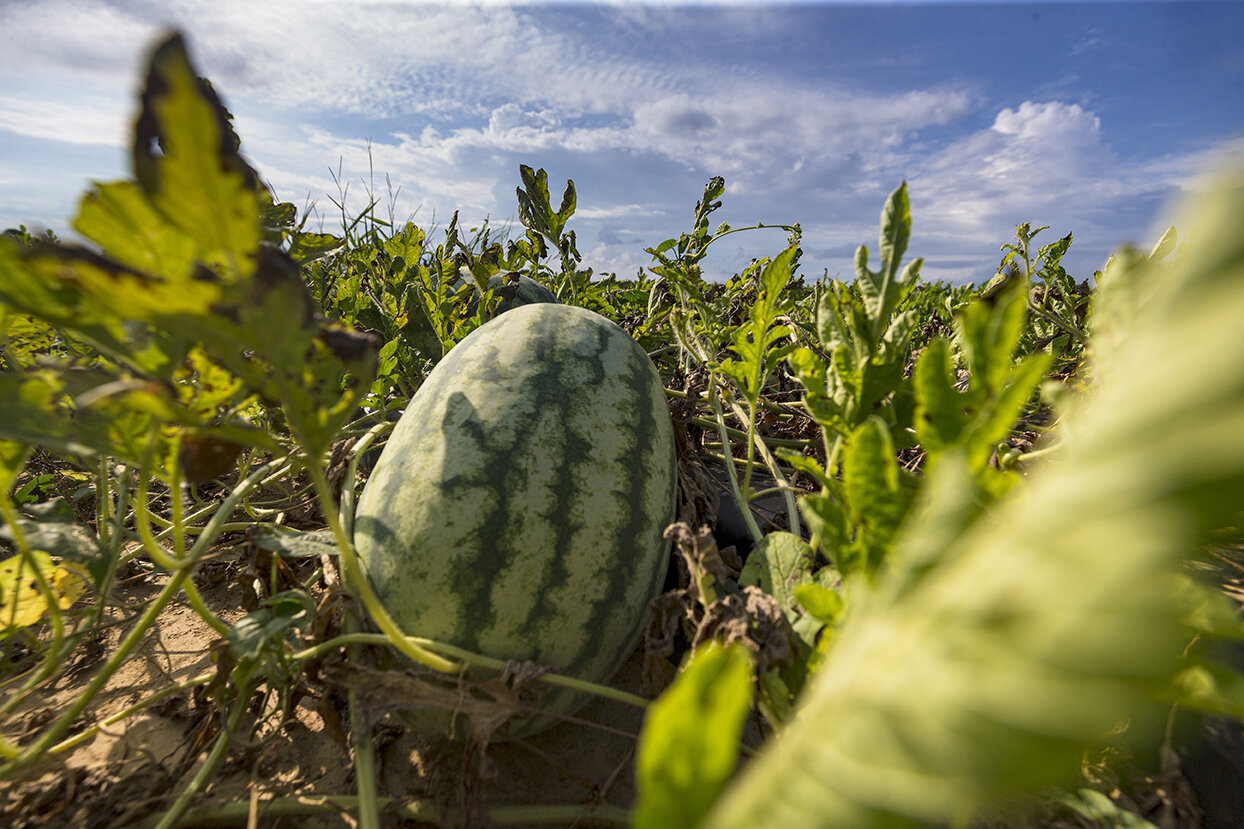 Steve’s equipment is of critical importance during the long hours of labor throughout the planting seasons. His water wheel planter is laced with spikes; when the wheels perforate the ground, a charge of water shoots into the holes and the plants are settled within. Most of his rows of produce are shielded by thick, black plastic that gives him more earliness, holds moisture longer, and warms the soil quickly. 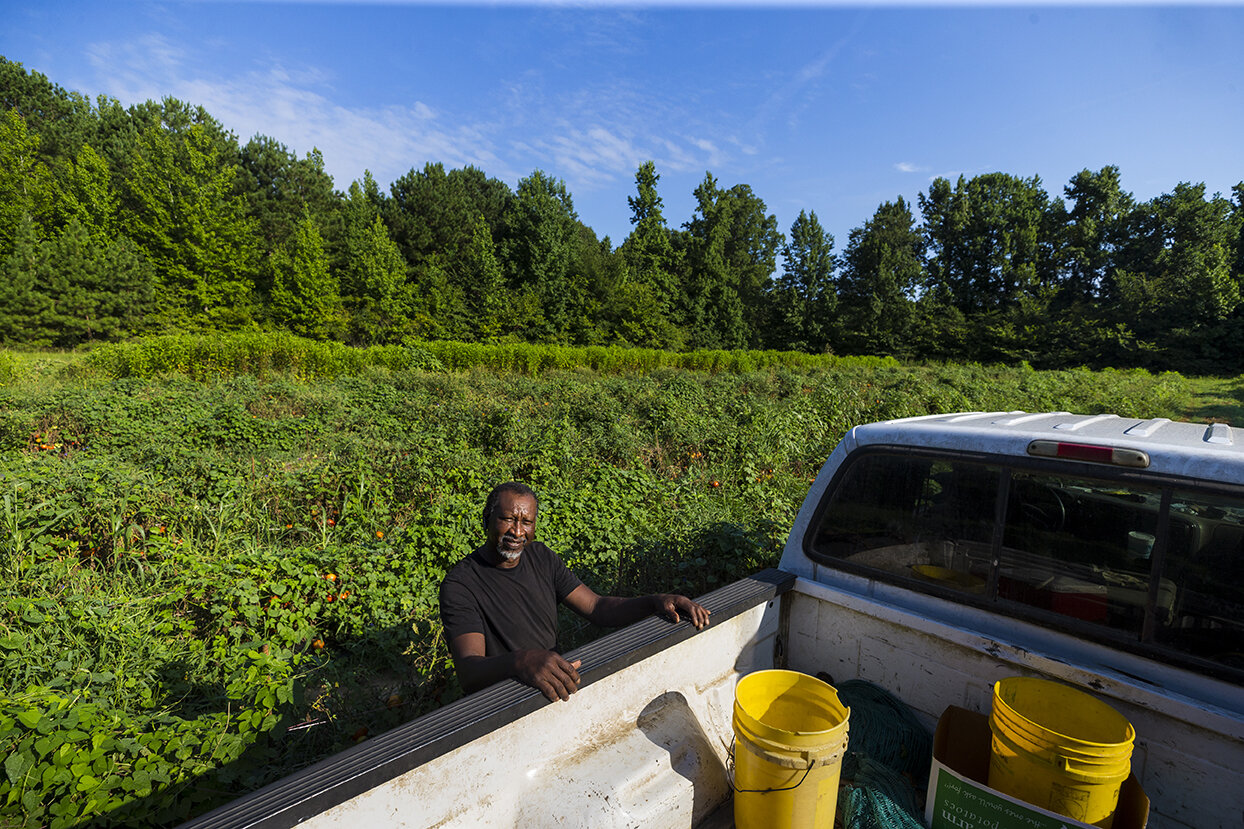 According to Steve, every plant’s plan is to survive, which is the purpose of producing food. “Plants don’t add fruit so you can eat,” says Steve. “It adds fruit so it can survive for the next year.” During harvest the challenge is to keep a good pace of picking fruit from the vine before the plant shuts down and “matures,” a survival mode when it stops replenishing itself.

“I remember telling some other small farmers—20 years ago—that the days of the small farmers would be obsolete in five years,” says Steve. “And, by small, I mean 500 acres or less. Although small farming may still be persistent, young generations are not picking up the field.” 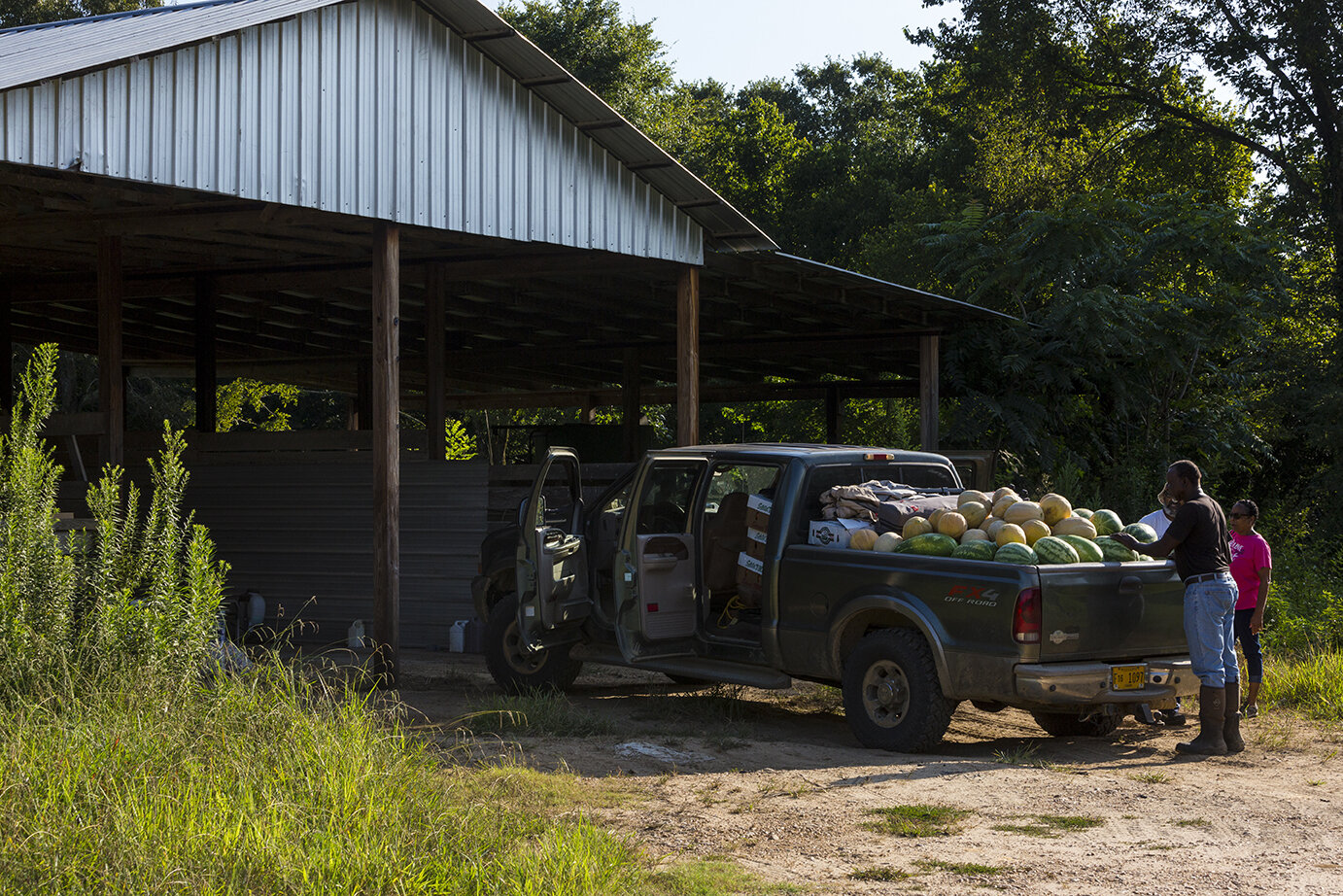 Steve will one day pass down all of his farmland to his descendants—two daughters and a 15-year-old grandson who comes to help sometimes.

His hope is to motivate more young people to keep small farming viable.

In the winter, Steve puts his carpentry skills to use, working with wood and metal. He’s made farm equipment, rotisserie grills, and, most notably, a couple of houses—one that he previously considered his homestead and the other a cabin where he nestles each night before rising at 5 a.m. And he’s currently building his new place of residence. 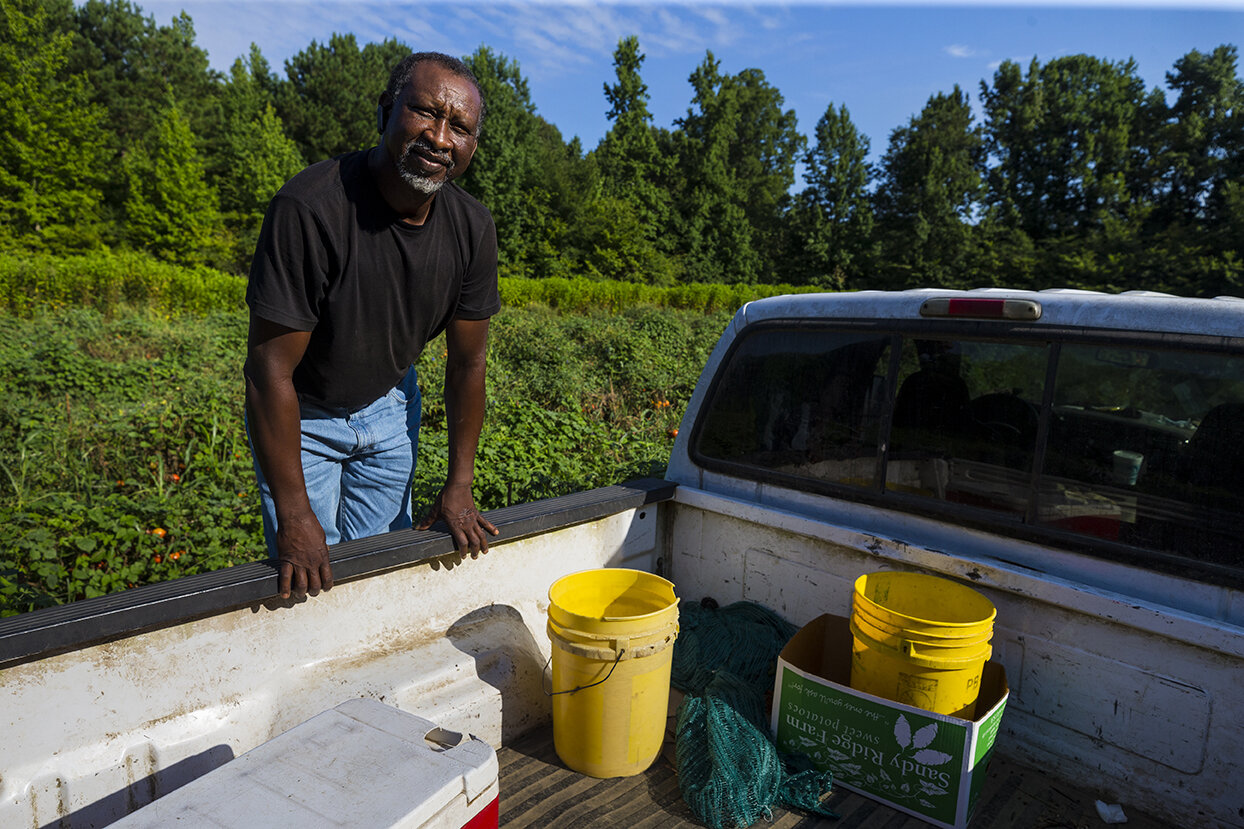 Erika Cain is a communications vet with chops in writing, public relations, graphic design, TV, radio, and brand strategy. She is a skilled storyteller and has been a trusted adviser to executives and companies for almost two decades. Erika founded GIRL 24, a business mentoring initiative to help build a culture of gifted and ingenious female leaders. She is a spouse, mom, speaker, community volunteer, and member of Junior League, and loves dissecting brands. @ecain_co

Anthropologists in the Midst

Are the Scales Tipping?