0 0
Did somebody say Cheese Dip Trail? 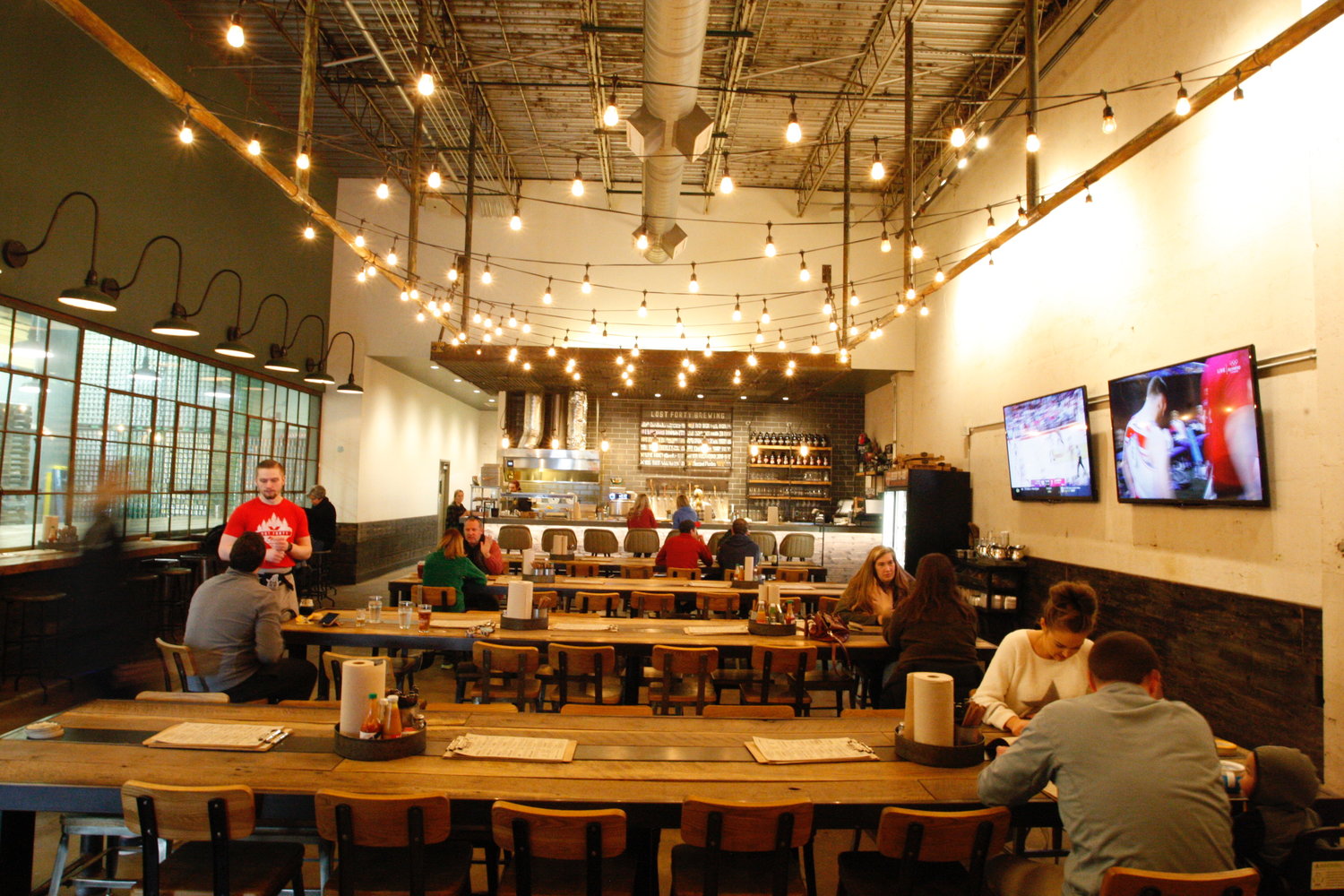 Back in the day, Little Rock was the place where we drove for cheap flights. Then maybe we went that one time to visit the Clinton library with the kids.

Plus, it’s only two hours away so it can still technically be filed under “Day Trip!” 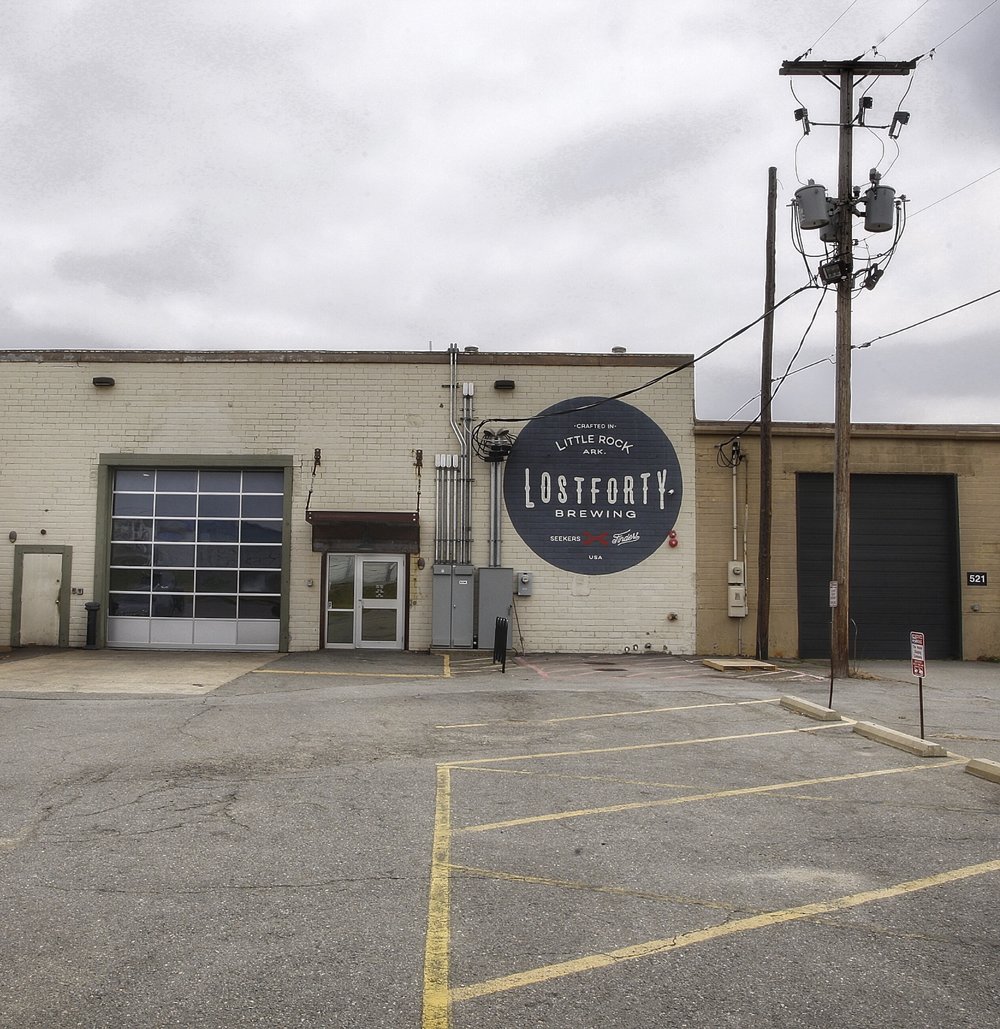 Let’s start with beer. Little Rock has more breweries than Memphis—about 10—which seems wrong, but whatever. The big daddy of them all is Lost Forty Brewing. Their brewery and taproom aren’t too far from the Clinton library, and it’s a good place to stop right when you hit town to load up on beers for your stay and/or to bring home. It reminds me of Wiseacre in the look and feel, and also because they’ve done a great job of getting their beers distributed (everywhere except Memphis!). 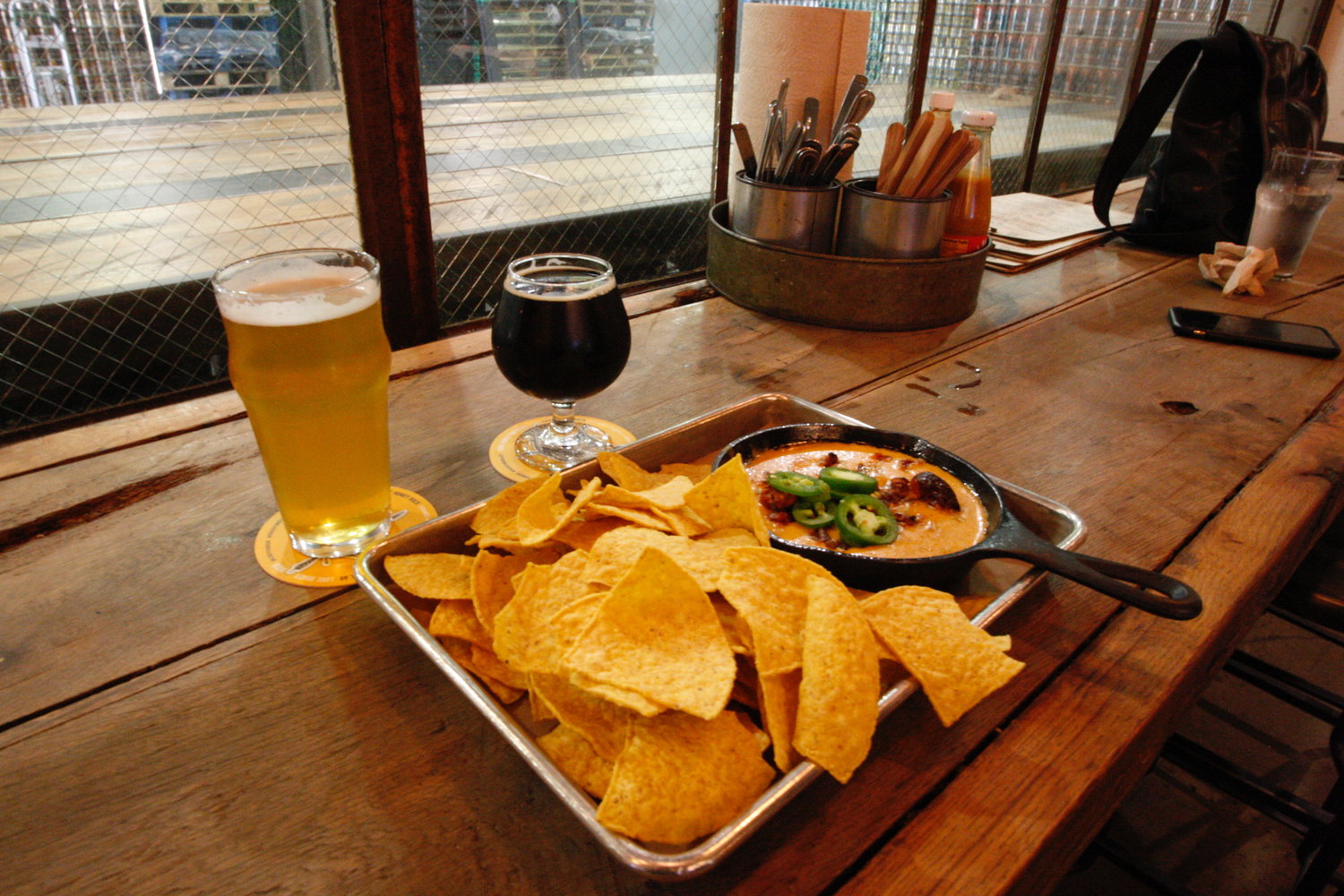 The taproom has a pretty nice restaurant inside and serves a killer Petit Jean bacon and cheese dip (more on that later) in addition to house made brisket and bratwurst. Obviously, buying direct is the cheapest way to go, and you can load up on merch and taste specialty beers on tap. But you can also pick up Lost Forty beers in cans at most grocery stores, convenience stores and bars in town.  Love Honey bock is their gold standard, the Day Drinker Belgian blonde and Easy Tiger Mexican lager are personal favorites, and there are always fun, small-batch beers, like Blackberry Bramble, to try.

Pro tip: Once you’re hooked, don’t be sad. You can often find Lost Forty at the Kroger and Walgreens right over the bridge in West Memphis. 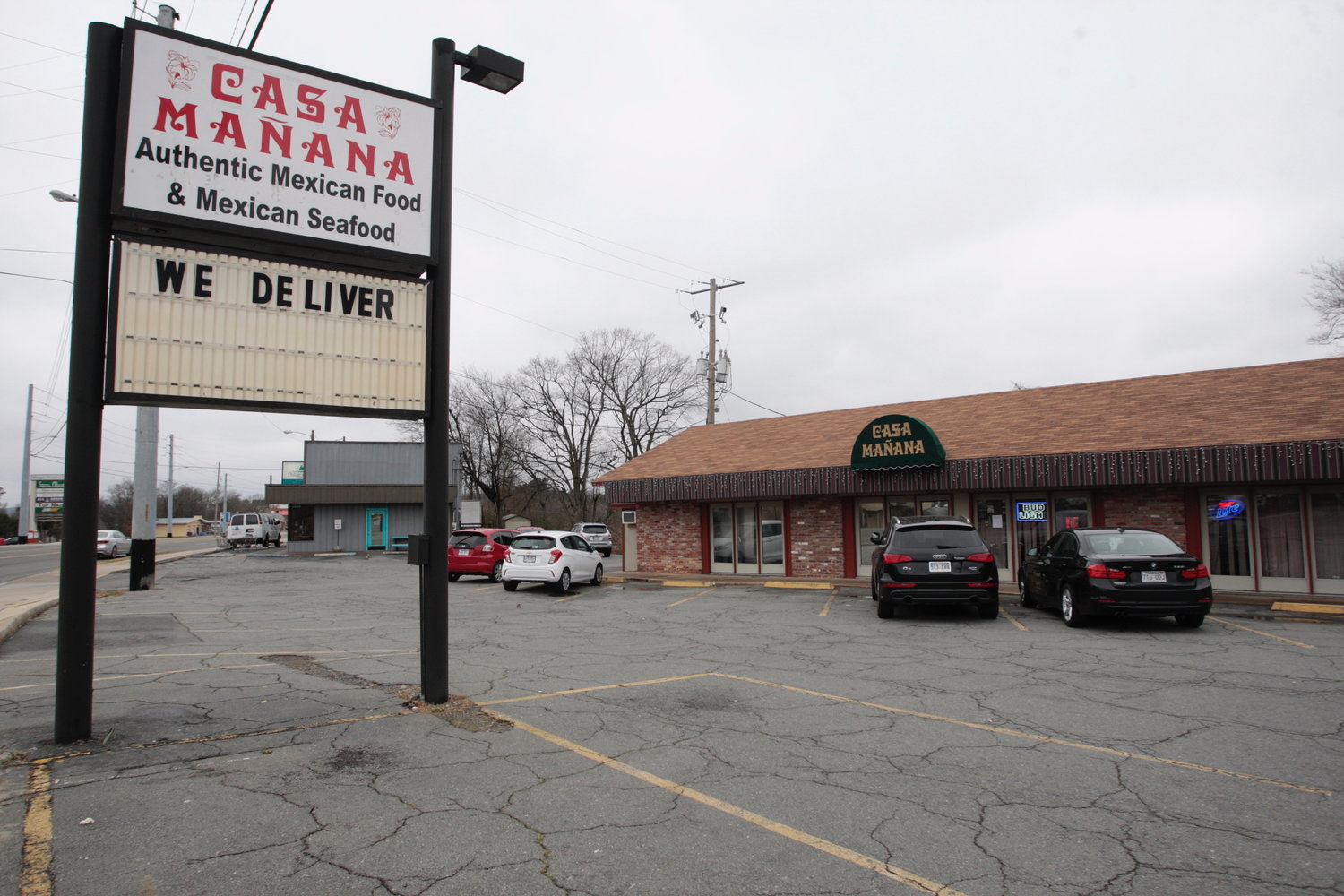 Ok, about that cheese dip, did you know there’s an official Arkansas Cheese Dip Trail?

Our beloved Pancho’s in West Memphis is at the very end of the trail, and you can find places all over the state putting their own spins on this condiment of kings. Delicious, melty cheese graces the menus of many a restaurant in Little Rock, but Casa Manana, with three locations, is a “must stop” on the trail. It features authentic Mexican dishes with house specials influenced by Mexico’s Puebla, the American Southwest and the flavors of old Mexico. Casa Manana also achieves the holy trinity of good food, strong margs and a lovely patio. 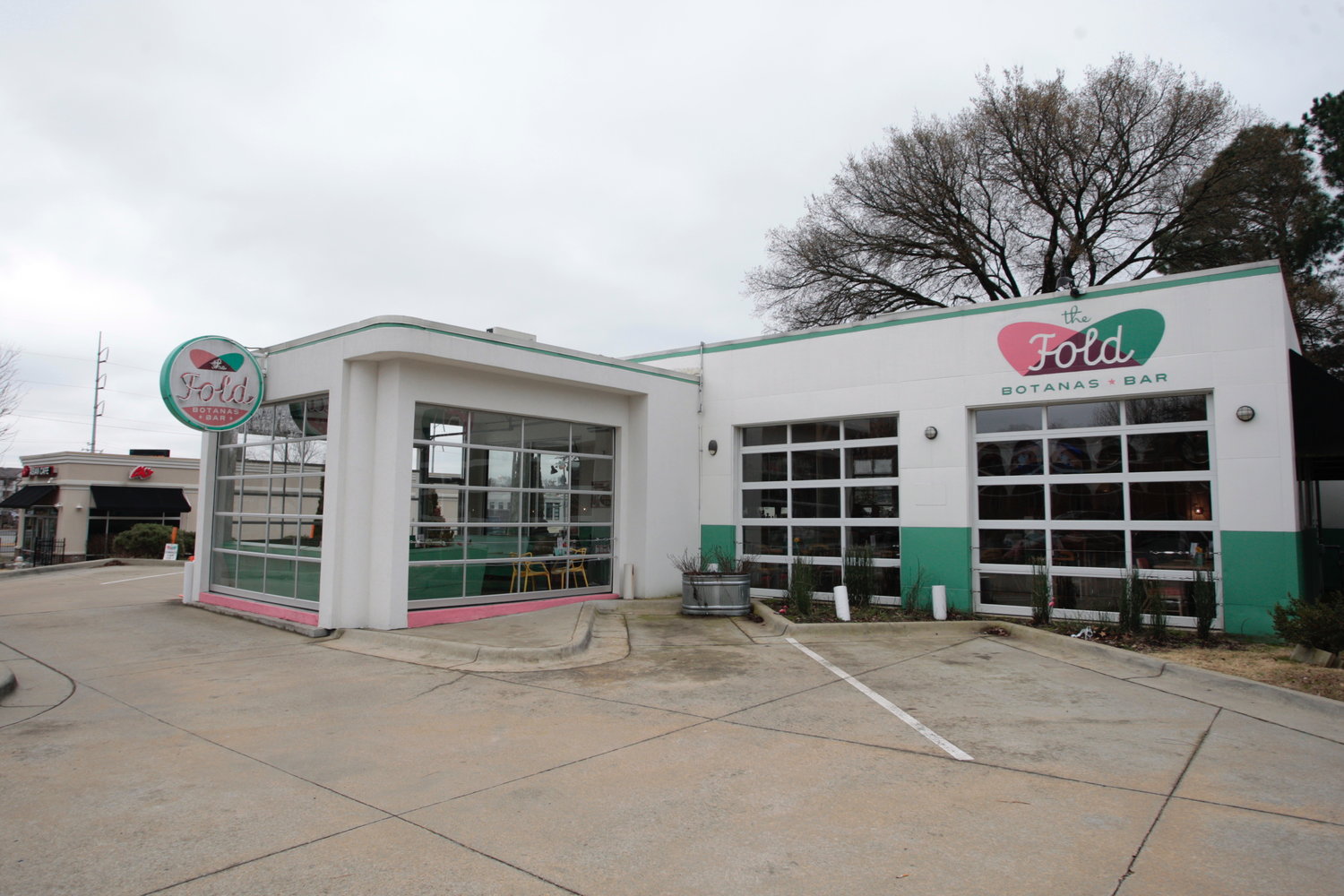 We also tried the cheese dip (and tacos and burritos and margaritas and almost everything else) at The Fold: Botanas & Bar. Inspired by the taco truck scene in Austin, the owners purchased a 1960s filling station and transformed it into a bright, airy space that blends indoor and outdoor spaces when weather permits. Fresh and tasty dishes that delight meat eaters and vegans alike are paired with hand-crafted cocktails and top-notch service. Their motto is “locally produced and thoughtfully prepared.” It’s basically everything we always wanted Cafe Olé to be and more.

Pro tip: For a quick snack on the go, hit Taqueria la Pasadita. It’s a walk up joint where they make their own tortillas, load their tacos up with lots of delicious meat and grill you a nice pepper to go with it. 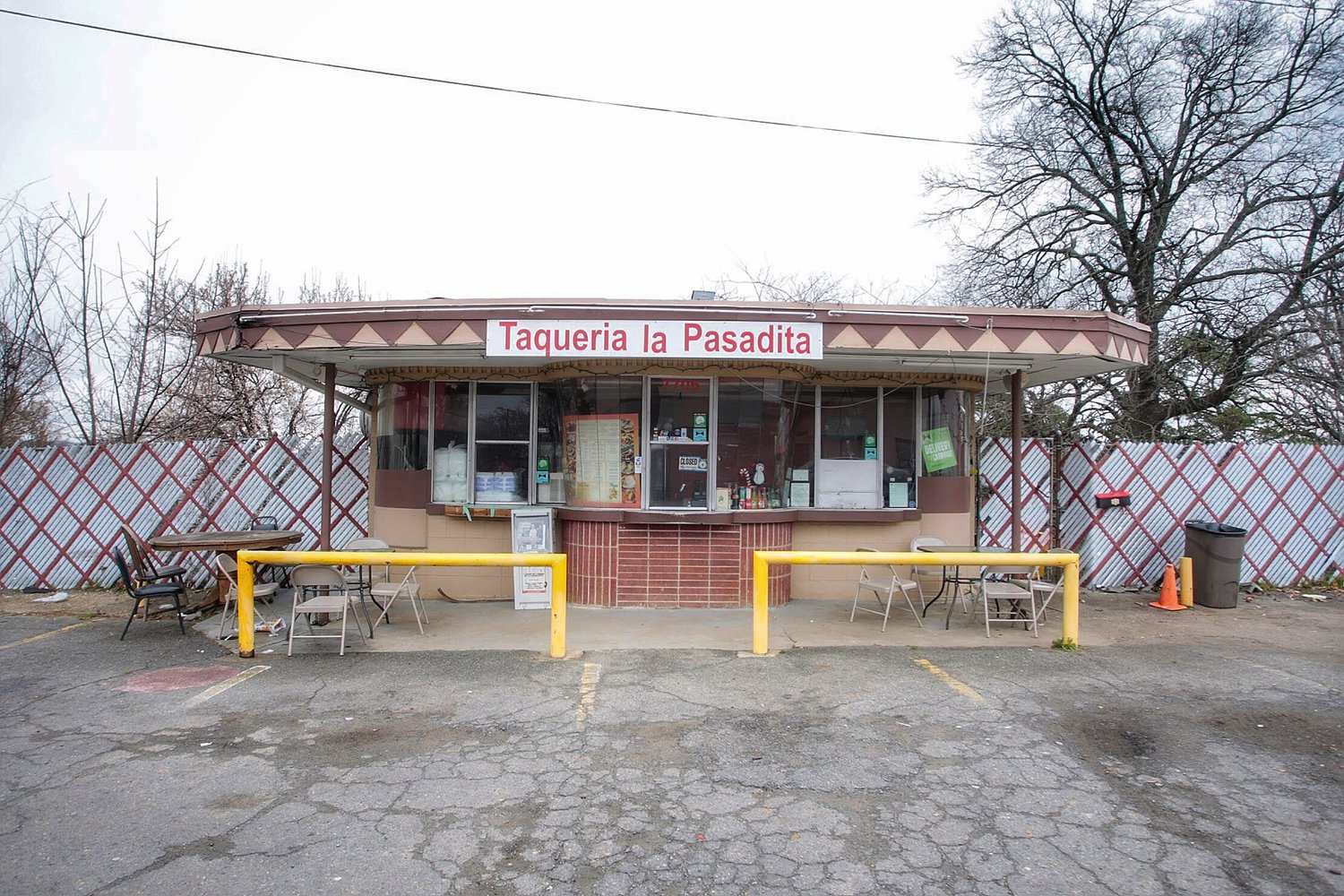 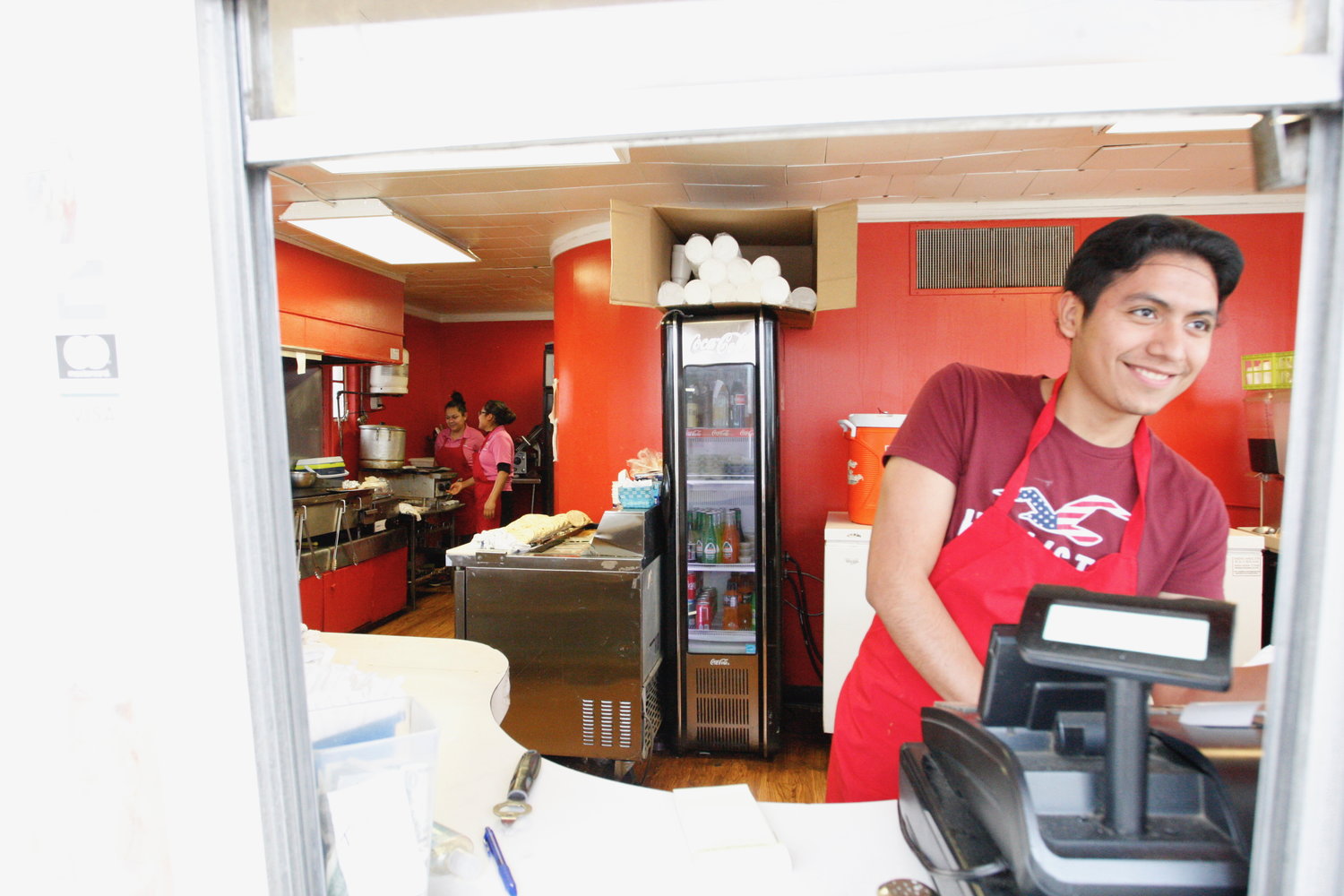 As I transition into cheesy pizza and eventually locally made ice cream and chocolate, I think it might be the right time to encourage the lactose intolerant to look elsewhere for their road therapy. 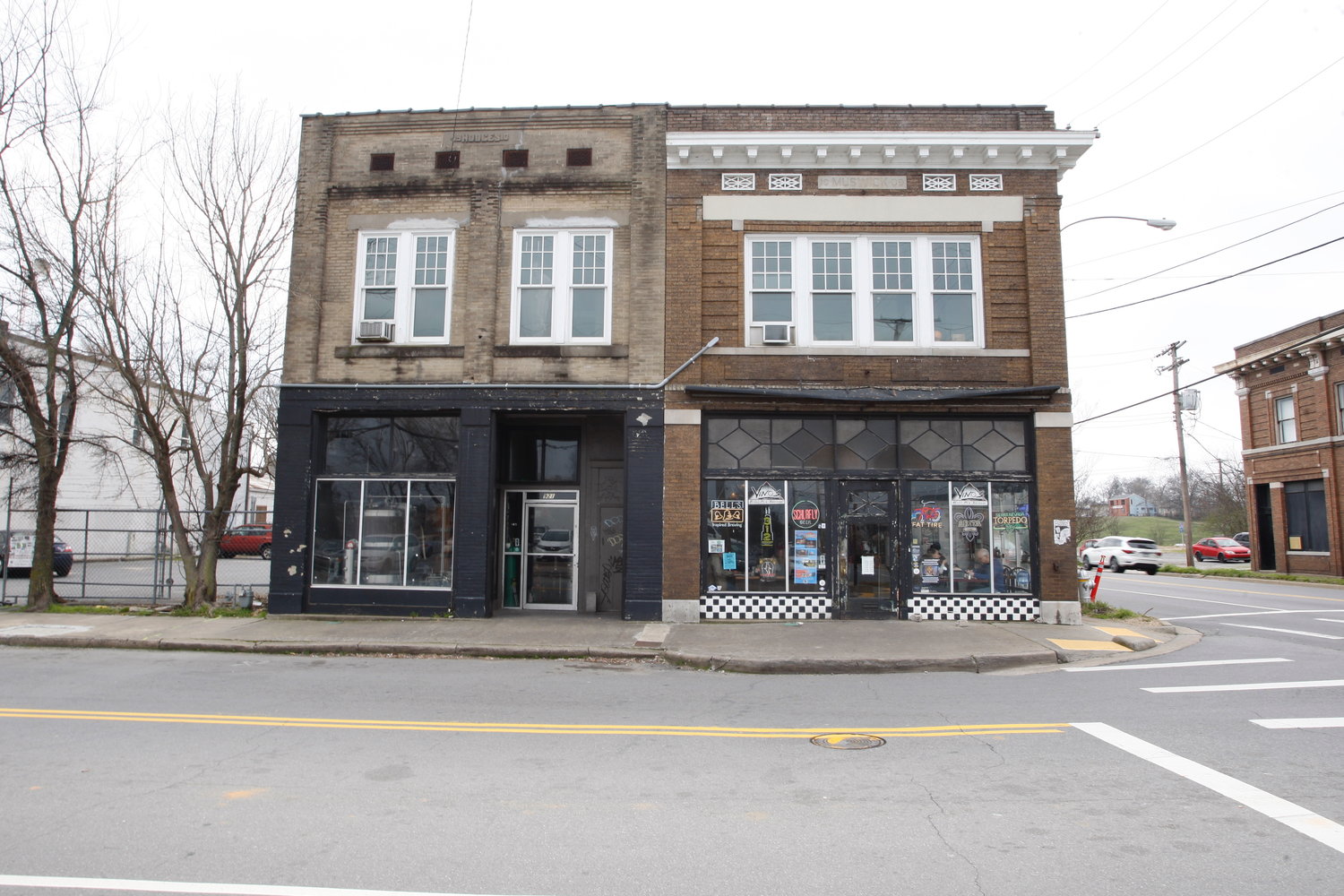 Pizza places have popped up all over Little Rock, but the two that are worth putting at the top of your list when you have a limited amount of time are Vino’s and Damgoode Pies. Vino’s is in a wee bit sketchy part of town, though totally walkable from downtown. I’d compare it a bit to the old Hi Tone—lots of character, delicious New York-style pizza and live music. They also—bonus!—brew their own beer and have a two-story patio out back.

Damgoode Pies has three locations, and they deliver, so keep this in your pocket for when you get back to your Airbnb and still want a lil something. The secret to Damgoode Pies is the award-winning “stuffy” crust. It’s a double-crust pie with extra everything and sauce on top. I would say that, unlike in Chicago, it doesn’t take an hour to cook, but we did have an excruciating two-hour wait for ours late on a Saturday night. But! It was actually totally worth the wait. 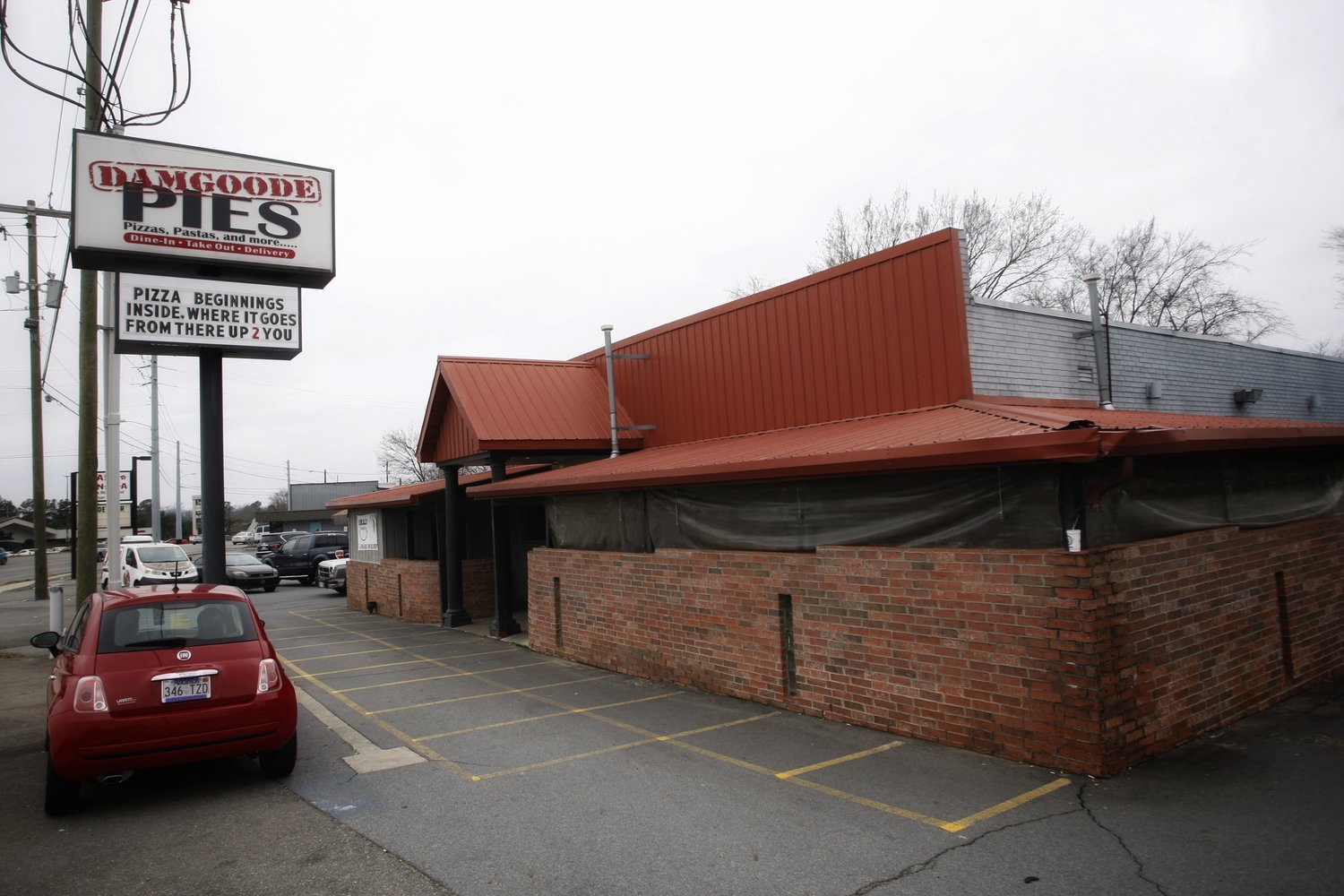 Stay the night so you can have breakfast. The Root Cafe is probably going to be the most recommended place for breakfast, whether by friends or the Internet, and it is 100 percent worth a visit. They source exclusively from local farms and create delicious, hearty dishes. I especially love that salad is a side dish, even at breakfast.

You can get local coffee, kombucha, tea or beer with your meal, and the restaurant has a laid-back, hippie vibe similar to Brother Juniper’s or Trolley Stop Market. Like any good breakfast spot, it gets packed, especially on weekends.

An added bonus of eating at The Root is that it’s close to lots of cute shops, the ESSE Purse Museum (super cool and worth an extra 15 or 20 minutes), a small farmers market and the Loblolly Creamery Ice Cream Bar.

Loblolly makes small-batch ice cream with fresh, seasonal ingredients, without the use of any premixes, preservatives, colorings or artificial stabilizers. They partner with local Arkansas farms, breweries and artisan craft food providers to create some really outstanding flavors like Salted Caramel, Little Rock-y Road, Double Vanilla, Fresh Mint Chip and Honey Green Tea. I know, you’re already wondering how you can try them all. Of course, they do taster spoons, but even better, you can get a flight of eight flavors for $11. Bingo! (You can also find Loblolly ice cream in stores and restaurants throughout the city if you don’t make it to the bar.) 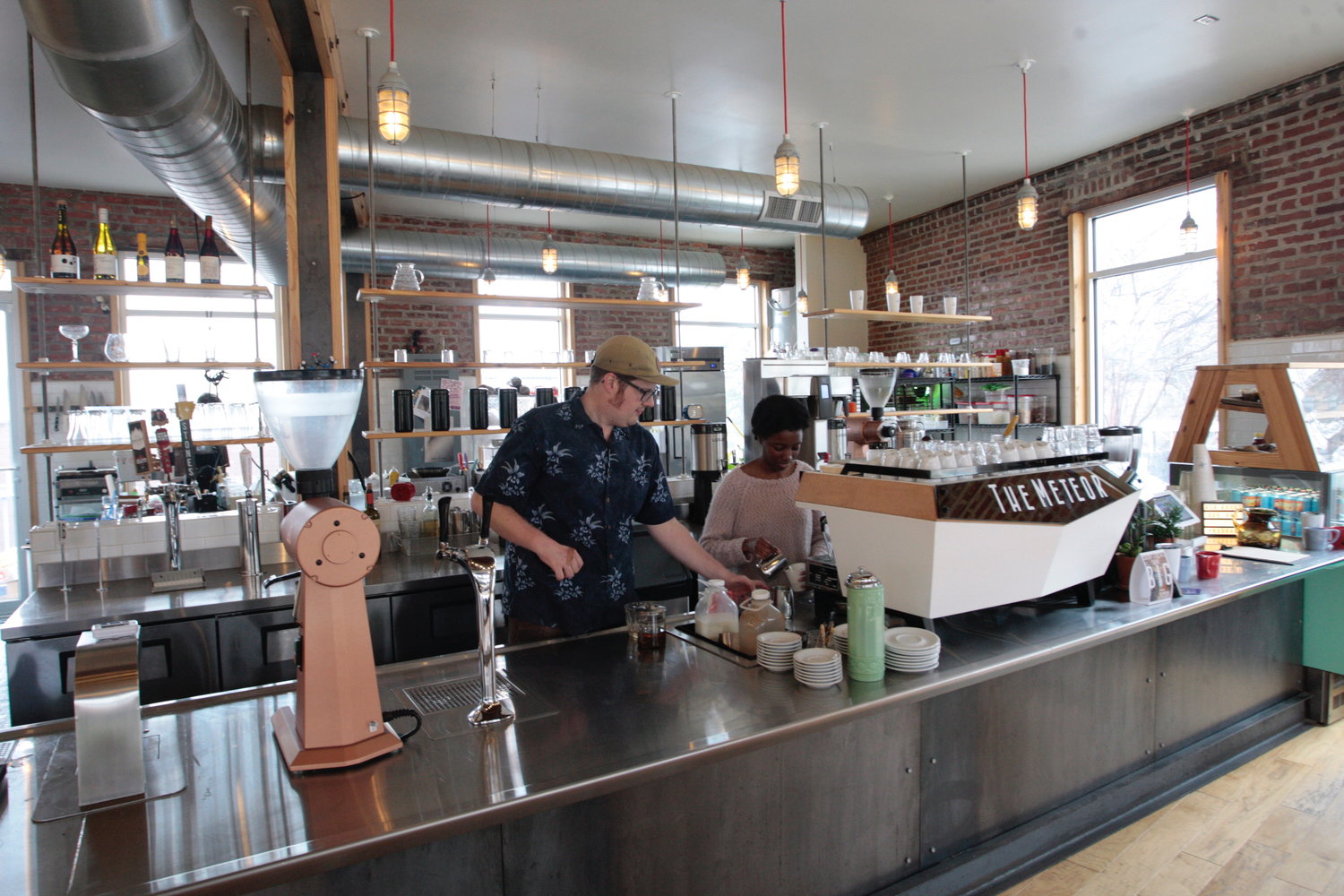 If you get the opportunity to eat two breakfasts or you are serious about your coffee, definitely go to The Meteor, which is one part cafe and one part bicycle shop. The cafe is open every day and features single-origin coffees, pour-overs and all the regular drinks everyone likes. For breakfast they have a selection of toasts, waffles, biscuits, parfaits, tarts, quiches and tacos. Add a side salad of arugula for $2. Convinced yet? There’s also a plant pop-up happening in the dining area, so you can take home a little friend. The bike shop is rad.

Pro tip: If you happen to purchase a bike between coffees, sign up for the Big Dam Bridge 100 tour, which takes place in Little Rock every September. It’s non-competitive and features courses that range from 15 to 100 miles. Our own Victory Bicycle Studio offers a “Couch-to-50-miler” training course each year in anticipation of the ride.

Ok—there’s one more “must eat” in Little Rock, and that’s Izard Chocolate, a bean-to-bar chocolate company. The only problem is that the factory and retail store are set to close by the end of March 2019. Until then you can stop by to see how chocolate is made, learn about different cacao origins and try samples of products courtesy of Nathaniel Izard himself. He’s a young, passionate chocolatier who enjoys chatting with his customers. After March, chances are you can still pick up Izard chocolate in stores around town, order online or at the very least get a taste of it in local brews, such as the Izard Brown Ale from Lost Forty, which features Izard’s cocoa nibs.

Stacey Greenberg is the editor-in-chief of Edible Memphis. Instagram: @nancy_jew

Richard Lawrence takes pictures in and around the city of Memphis and the Mid-South. You can find him on Instagram: @sundayinmemphis.