Feeding the cast and crew of touring Broadway shows 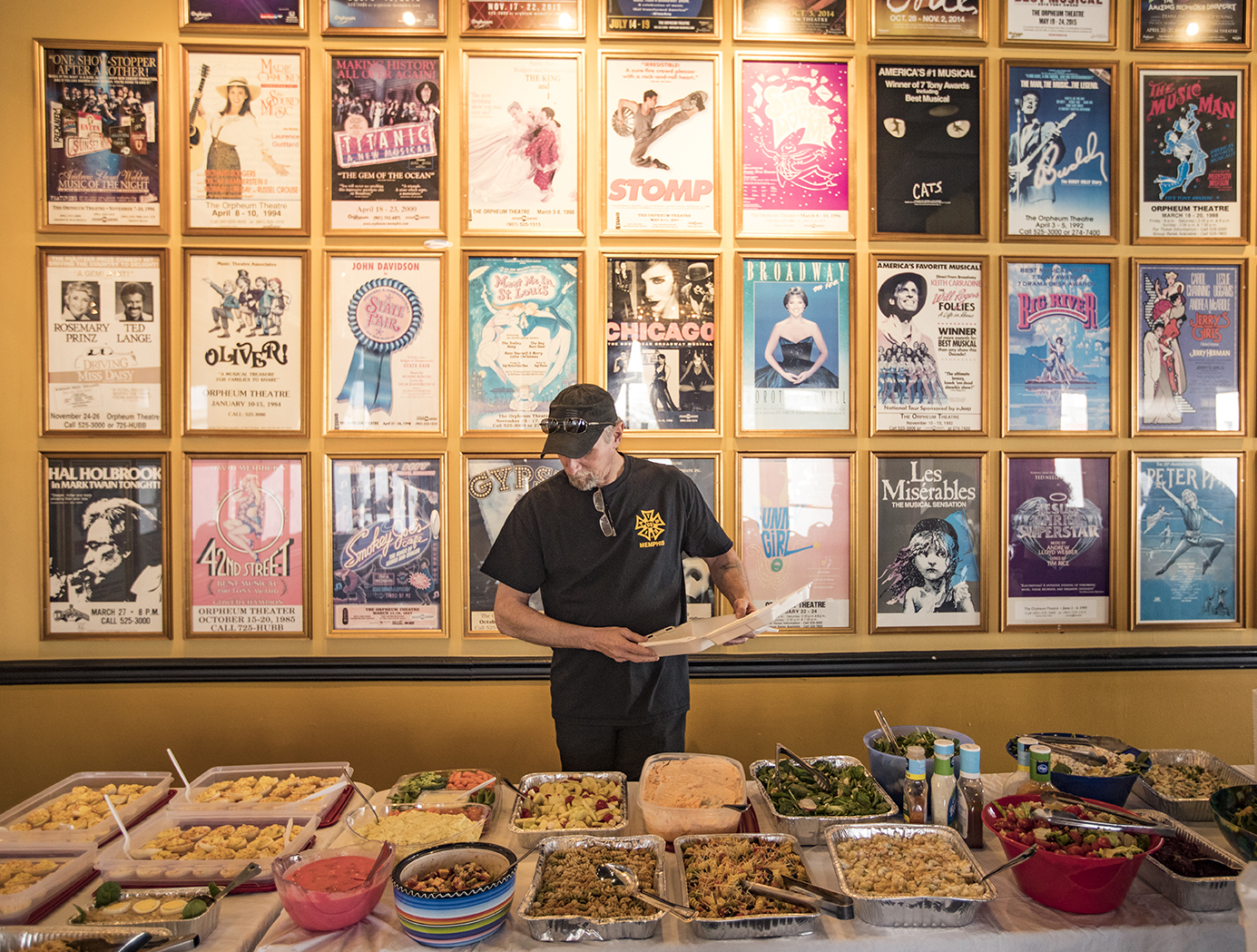 Stately magnolias surround Tom and Ellen Mulligan’s 120-year-old bed-and-breakfast in Horn Lake, Mississippi. White pillars and a high roofline lend a certain grandeur to the entrance. Inside the house, Ellen is busy preparing her famous Foolproof Rolls and broccoli-rice casserole. Dressed in theater black, Ellen cuts the dough with the same biscuit cutter she’s used for 60 years. Ellen does a lot of cooking—guests at her establishment enjoy four-course breakfasts and homemade desserts during their stays—but this ritual is special. She’s preparing comfort food for the cast and crew of a touring Broadway show at the Orpheum Theatre in Memphis. 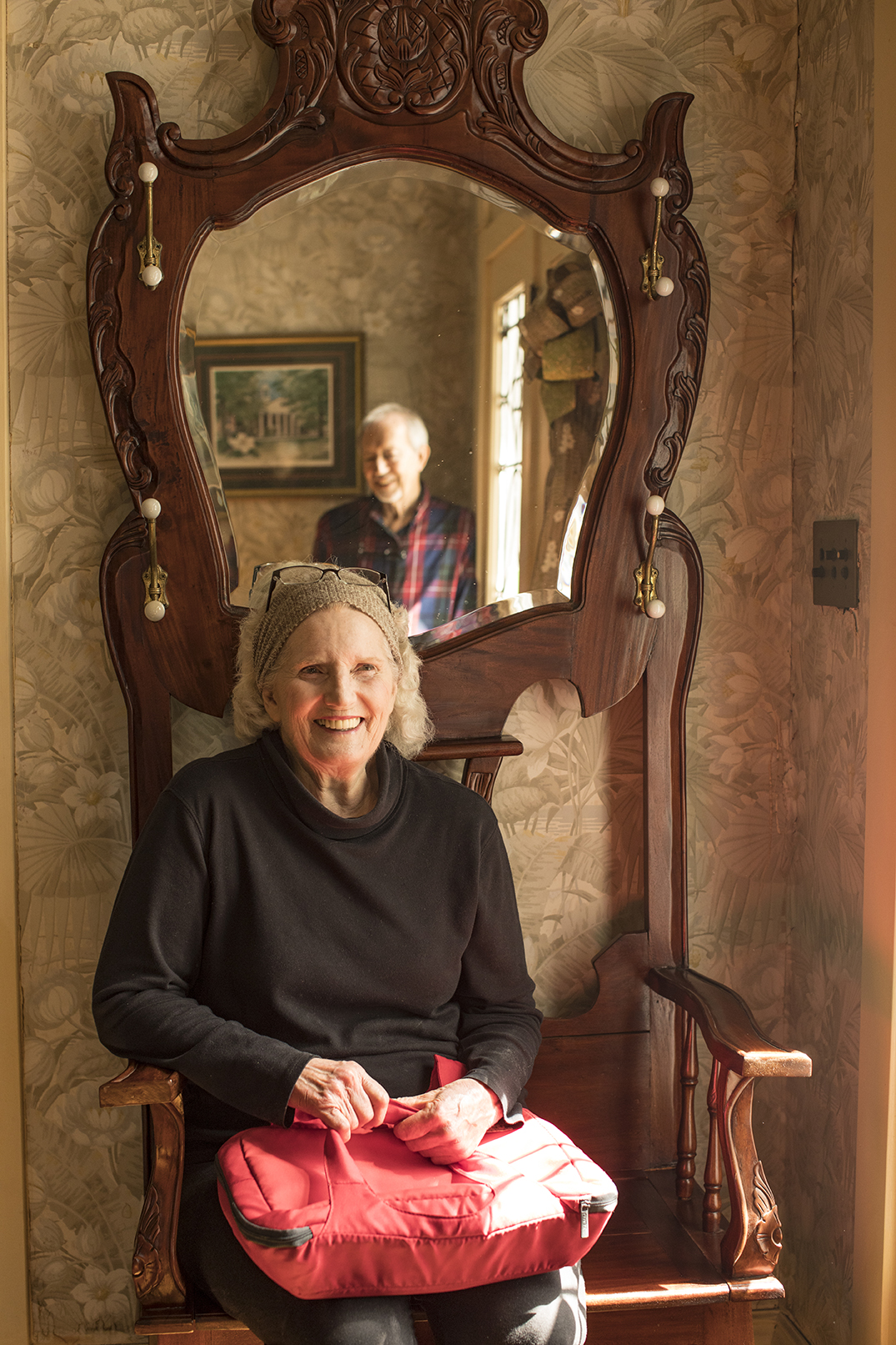 “The performers are almost all young; you’d have to be to sing and dance for hours like that.

They don’t get ‘Mom’s home cooking’ anywhere but Memphis.

In other cities, the cast party is a catered event,” Ellen says as she dips each roll into melted butter before placing it in a pan.

Butter is the secret to Foolproof Rolls, so named because Ellen claims they have never failed to rise. In addition to the pre-rise dunking, the rolls are brushed with melted butter after they come out of the oven. This generous amount of fat gives them a marvelous crackle and a melt-in-your-mouth texture.

The aroma of yeasty dough casts a kind of spell around the kitchen as Ellen rolls and cuts the dough. Ellen has been preparing food at the bed-and-breakfast for 16 years. She says she just enjoys taking care of people.

“If you like to cook and the kids are gone, who are you going to cook for?” she asks with a laugh.

Tom is a willing recipient of Ellen’s cooking and an equal partner in their ushering gig for the past 25 years. They volunteer at the Orpheum as frequently as they can, most often on Sunday evenings when they are least likely to have guests at their bed-and-breakfast. Tom and Ellen love the history of the theater—they remember when it was a Malco theater in the 1940s, ’50s and ’60s, when it was scheduled for demolition in 1976, when it blossomed into new life starting in the early 1980s—and they love to see shows. Tonight, they will usher for Fiddler on the Roof after they help feed the cast and crew. 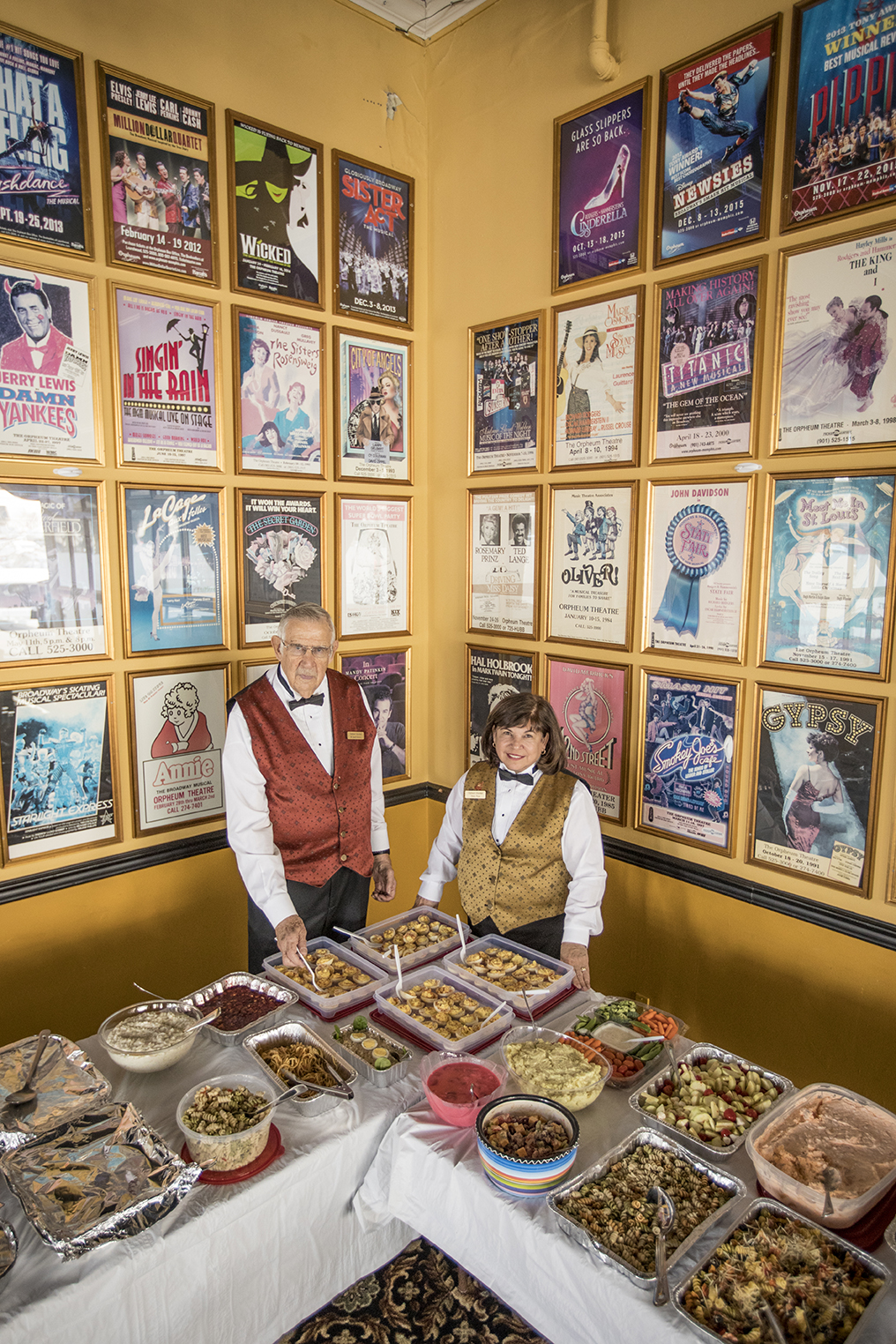 Every Broadway show that has come through the Orpheum for the last 25-plus years has had a home-cooked potluck cast party on Sunday afternoon between the matinee and evening performances. This consistent hospitality has not gone unnoticed. In 2017, the Friends of the Orpheum (the volunteer ushers) received a “Star of Touring Broadway” from the Broadway League in New York City. This organization also confers Tony Awards, so the star is a fairly big deal. The meal also receives unofficial recognition in the form of social media photos of loaded plates posted by cast members. According to one of the primary organizers, Leigh Bernil, these pictures garner plenty of envy. 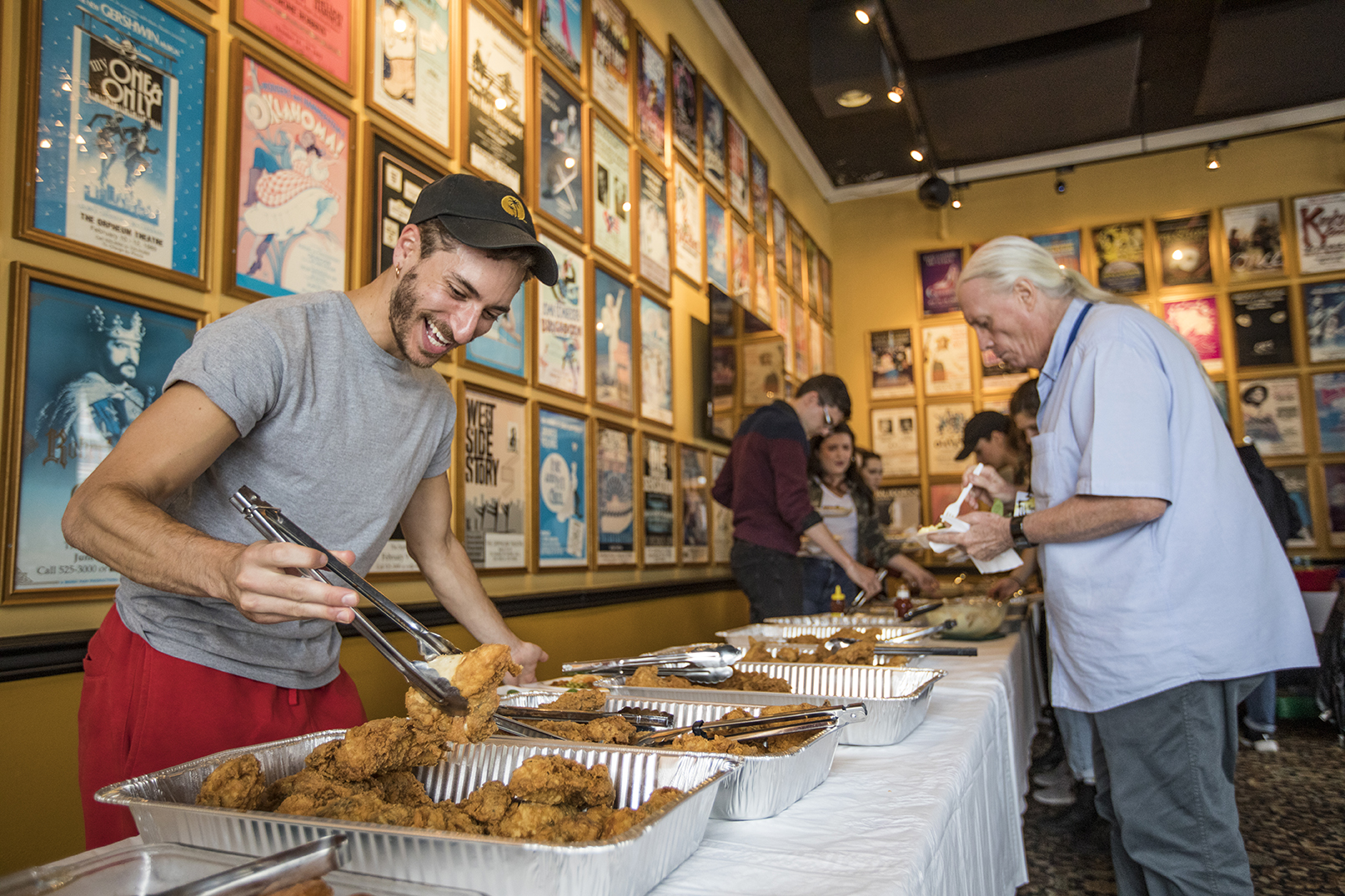 “When the performers post pictures of plates of their food, people on the touring circuit reply, ‘You’re in Memphis; I hate you,’” says Leigh.

The celebrated potluck takes place in the Broadway Room, which is accessed via an inconspicuous door on the corner of Front and Beale. Inside the room, long tables are loaded with dozens of dishes covered with foil and plastic wrap. The room is decorated in black and gold and the walls are covered with show posters from decades past. At the last possible moment before the cast and crew arrive, Leigh and several others uncover the platters at a feverish pace. At once, a dazzling spread of fried chicken, meatloaf, sweet potatoes, spinach salad, macaroni salad, cornbread, rolls, lima beans, mashed potatoes, carrots, ham, cabbage and other delicacies is revealed. 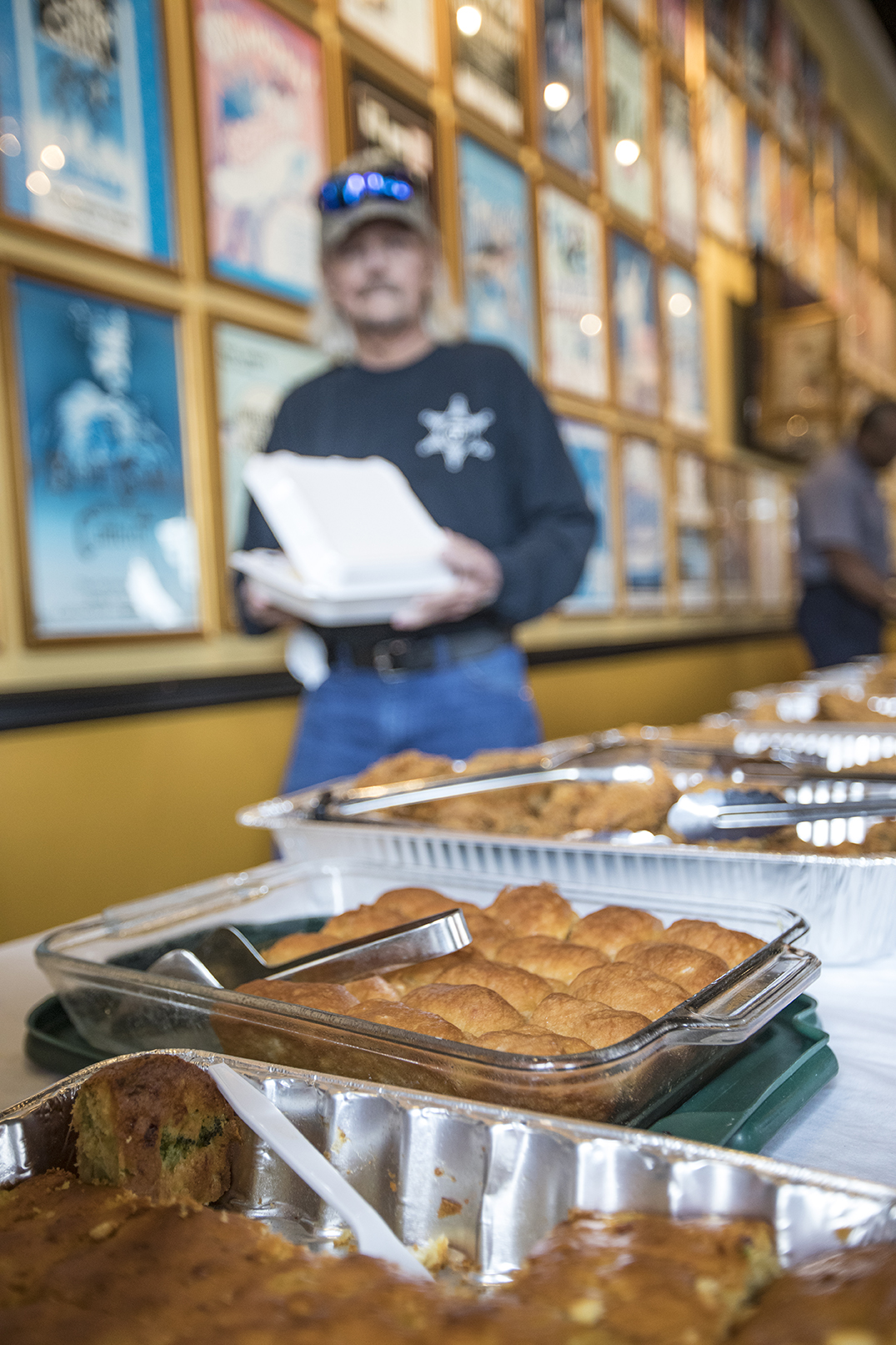 The first to arrive for the meal are black-clad members of the set-up and take-down crew. They head straight for the buffet and fill their plates. The sound and light crews come next. Soon actors, some still wearing stage makeup, make their way to the tables laden with food. Within 15 minutes, nearly every seat in the Broadway room is taken by more than 80 cast and crew.

Head electrician Zach Alexander of Chapel Hill, North Carolina, is participating in the Orpheum cast party for the first time.

“A nice home-cooked meal is a rarity for people who live on the road,” he says.

“I personally love devilled eggs. I haven’t had any since my grandmother passed,” says Zach as he sets two eggs on his plate. 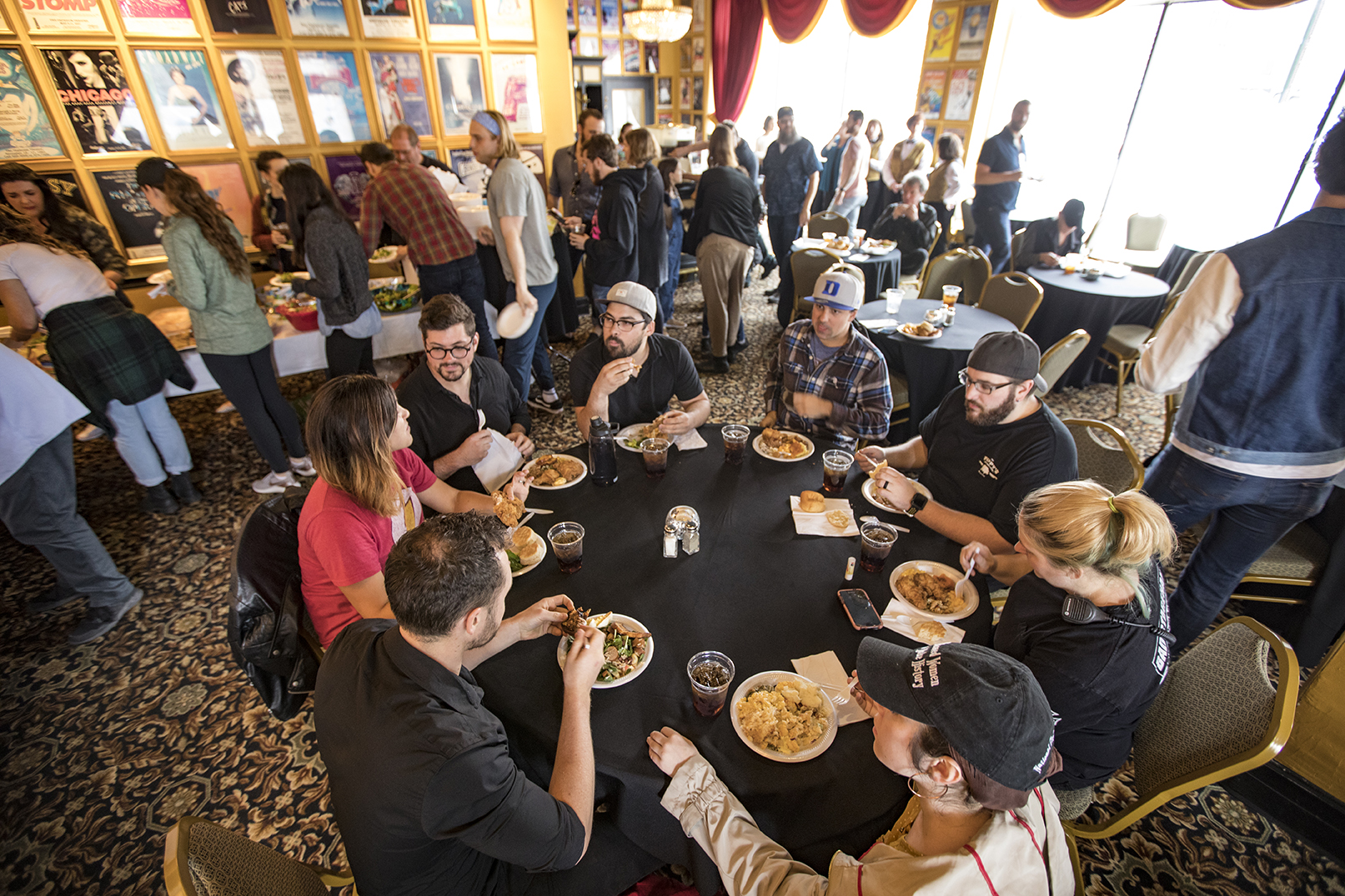 Dave Armb, a stagehand who lives in Memphis, always looks forward to the cast parties for the Broadway shows.

A short speech highlights the history of the meal and acknowledges the ushers who cooked the feast. Then the cast and crew gather for a quick photo behind a custom-made cake. They sing “Happy Birthday” to two cast members, their impromptu harmonies and sheer volume a truly astonishing blend in such a small space. Then everyone returns to eating and perhaps second trips to the buffet. 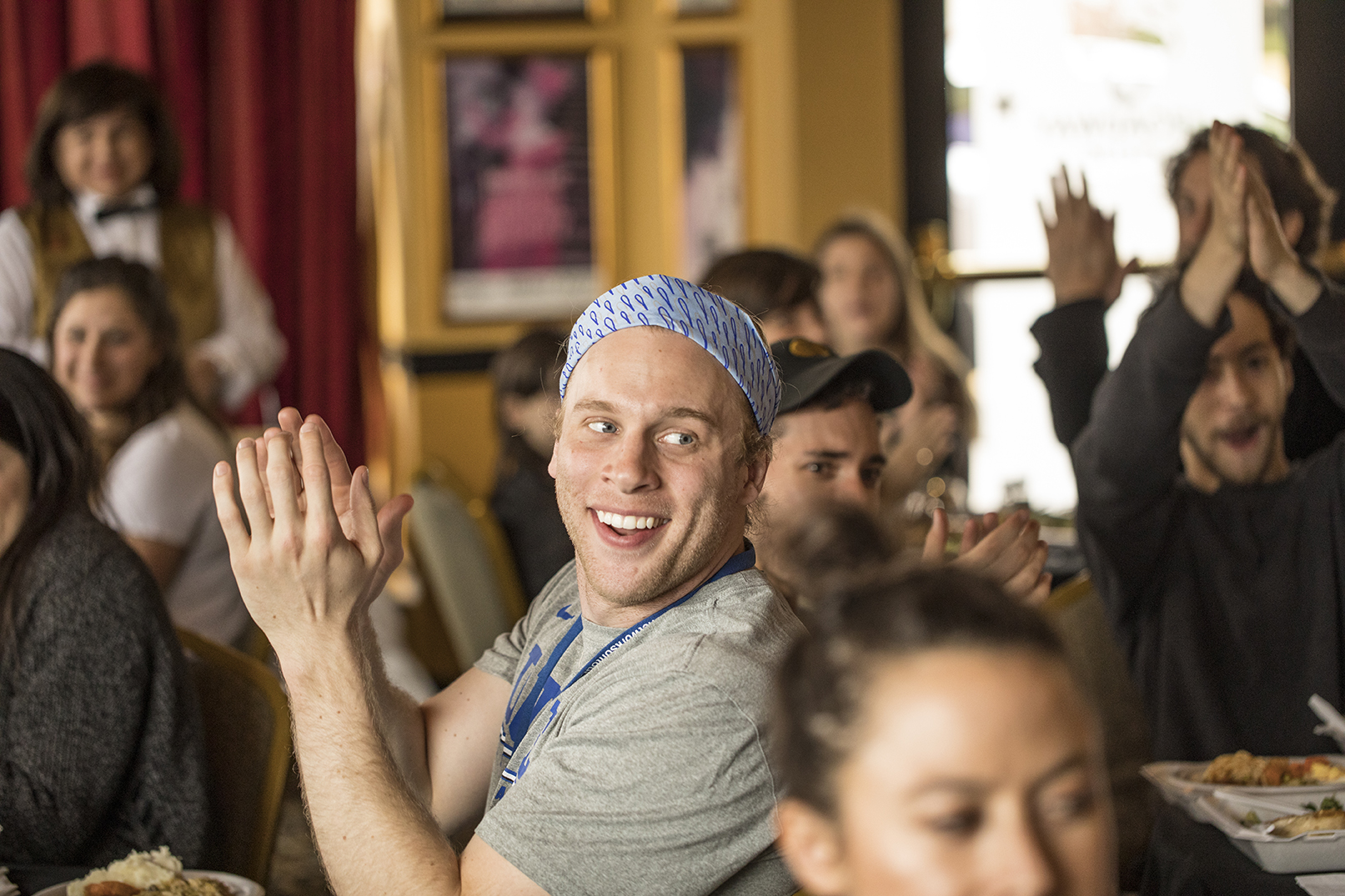 “There’s still ambrosia salad left? These people are idiots,” says cast member Britte Steele as she puts a generous dollop onto her plate. A South Carolina native, Britte describes her mother’s take on this dish of Cool Whip, Jell-o, mandarin oranges and pecans as akin to “eating a cloud.” When less-enlightened guests ask about the mysterious orange food, Britte sets them straight.

Jeff Brooks, a cast member from New York City, has attended four cast parties in Memphis. He says they are some of his favorite memories of the city.

“What I remember is how much care the volunteers put into their cooking and how it’s a little bit of a competition, but they won’t admit it. And it’s incredible food. You wouldn’t get this kind of spread in New York without spending 20 grand,” says Jeff. 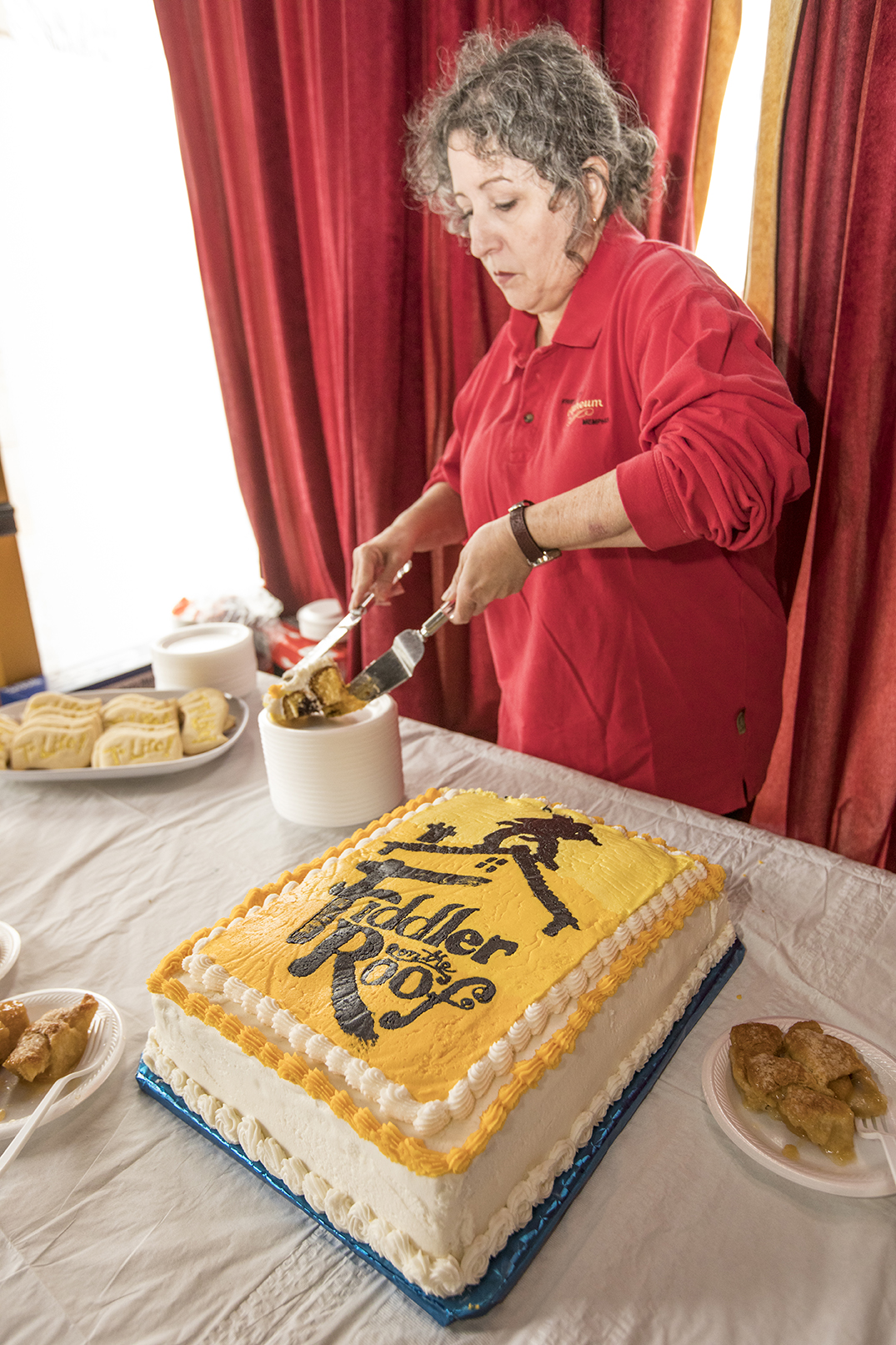 One of the showier aspects of the potluck is the cake decorated with the playbill design for each show. Holly Siebenschuh—at 20, one of the youngest ushers—and her mother, MaryLynn, replicated the picture by printing the image upside down and backwards onto laminated paper, piping the icing onto the paper, freezing the frosting design and, finally, flipping the finished icing onto the cake top. Nestled around the cake on the dessert table are bowls of peach cobbler and  banana pudding, as well as cookies emblazoned with one of Fiddler’s famous lines, “To life!” 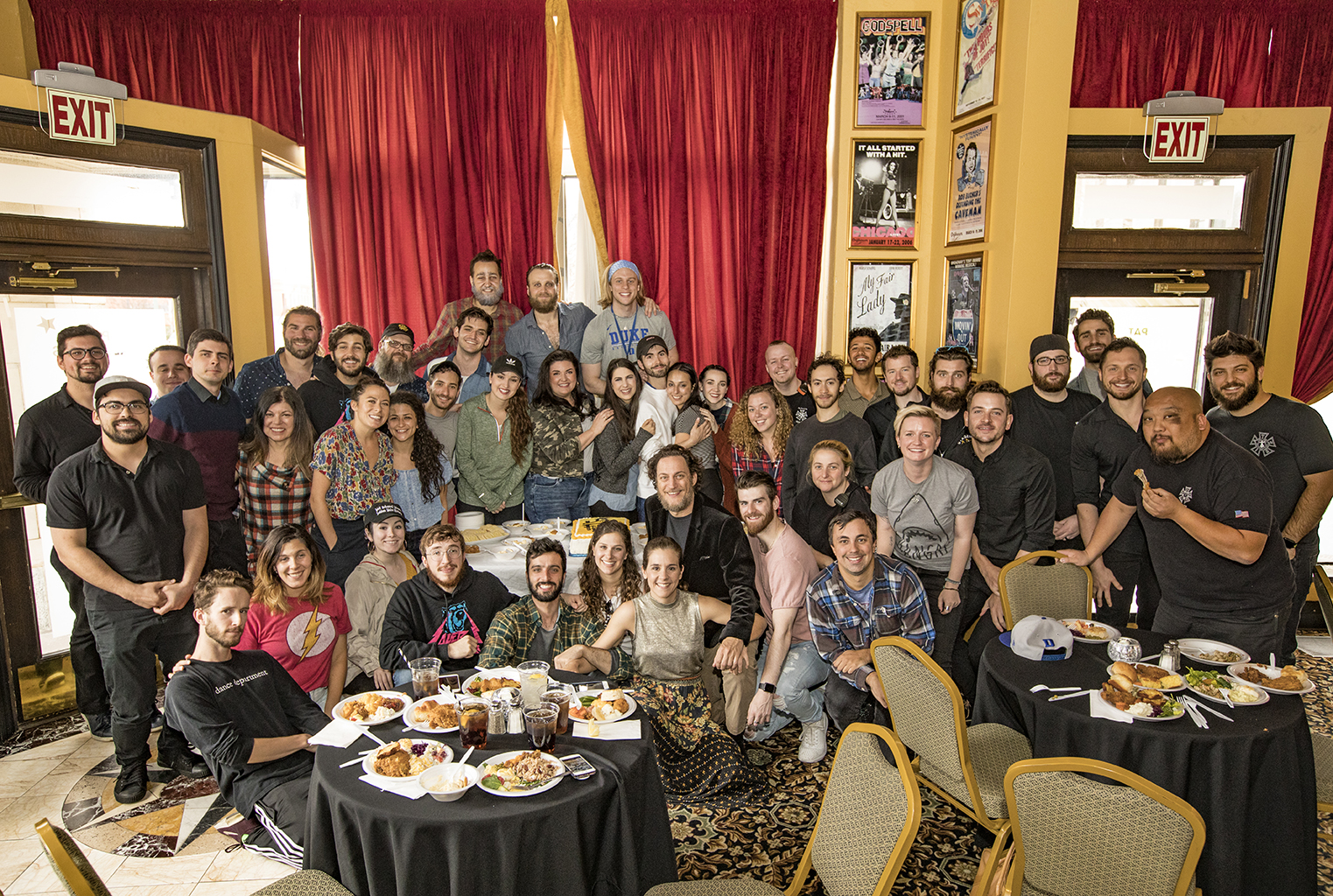 The room buzzes with energy, youth and goodwill. Despite a grueling travel and performance schedule, these people exude joy in their food and each other’s company. There’s no lingering, though. Plates are being cleaned at an almost alarming rate, and then people disappear out the door onto Front Street or back into the theater.

For Vickie Snider, a cast party organizer since 2009, the rewards of putting on this gigantic meal are personal. Several parties back, one crew member stayed afterward to ask about the dessert. When this man learned that Vickie had made the banana pudding, he thanked her and said that it reminded him of his mother, who had recently died.

“Those are the moments that make all this cooking and organizing worth it. We try to give them a little bit of home,” says Vickie. 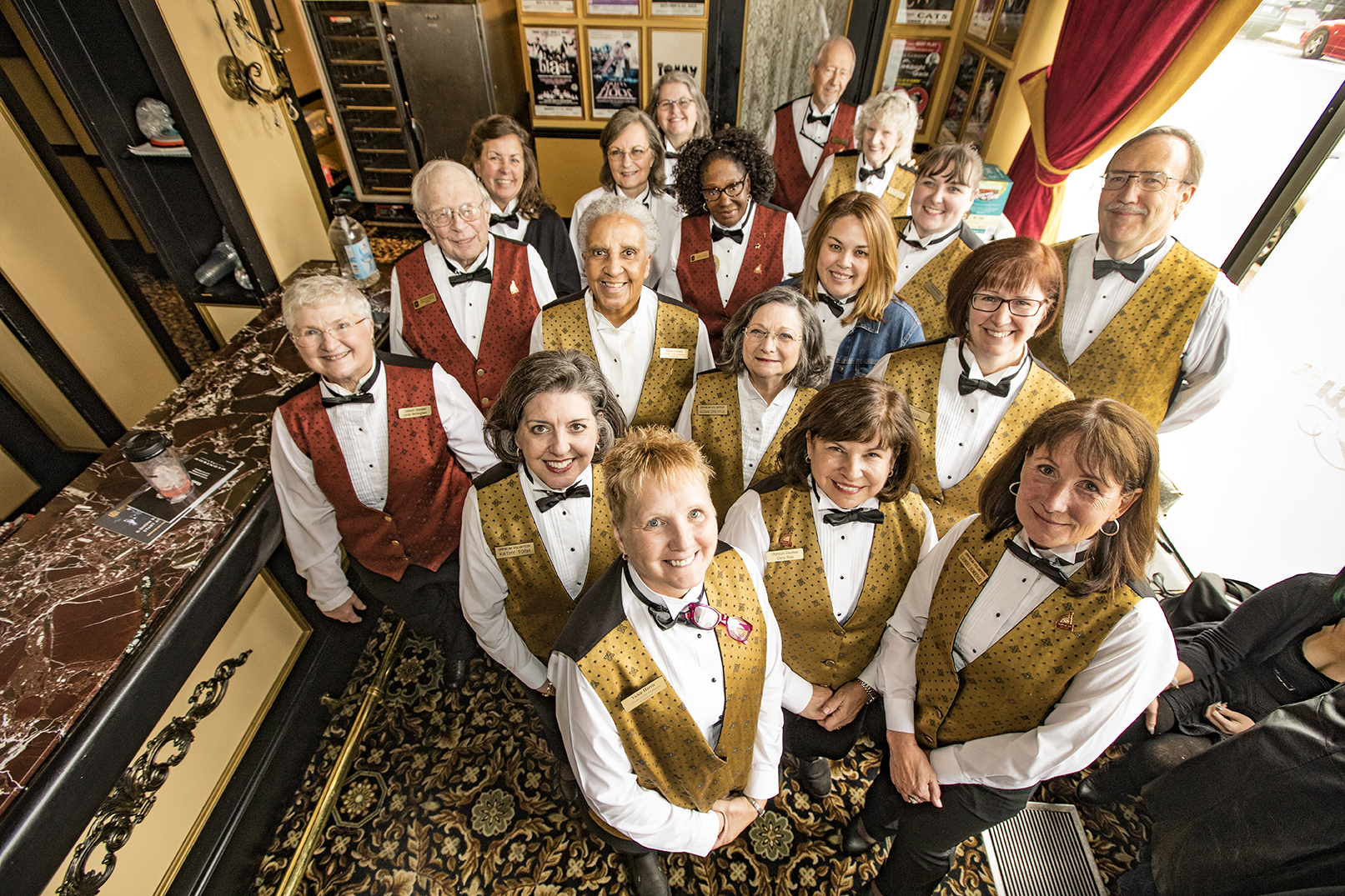 Heidi Rupke finds pleasure in maintaining the practical skills her grandmothers loved: quilting, gardening, keeping chickens and cooking from scratch. She enjoys biking around Midtown with her family and will drop everything for a good plate of Japanese-style pickled vegetables. @rupkeheidi

Pink Boots on the Ground