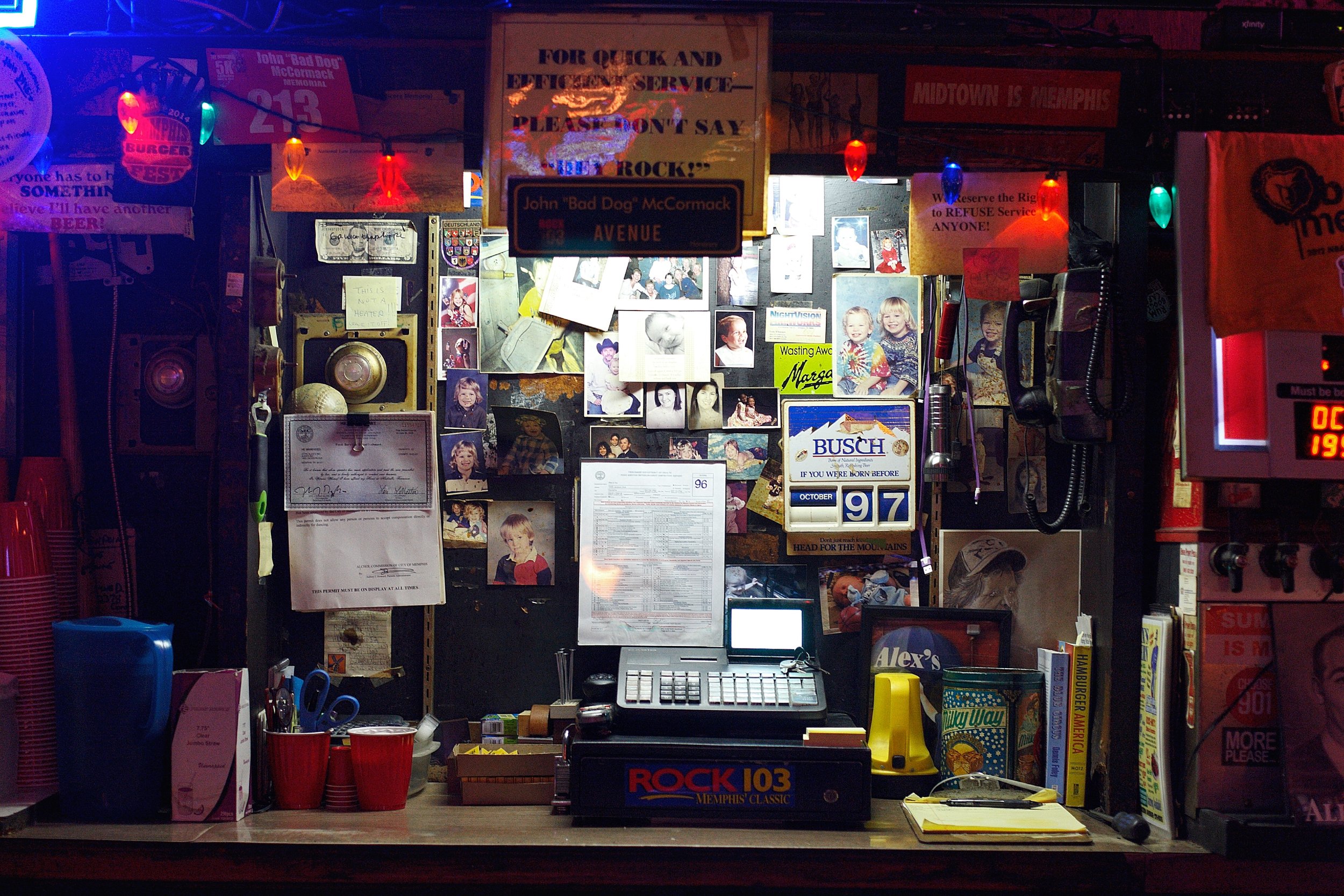 It’s pretty easy to spot the regulars at Alex’s Tavern, the hole-in-the-wall on the corner at 1445 Jackson Avenue that’s been serving up no-frills bar food for 65 years as of November 13.

One way you can tell is if they enter through the back. That allows them to pass Rocky’s office on the right as they come inside. Rocky Kasaftes is the guy in the ball cap with the permanent grin plastered on his face who’s been holding down the fort here for 40 years and who’s somehow always ready to dip into that wellspring of stories he’s accrued thanks to his status as the son of the late Alex Kasaftes. 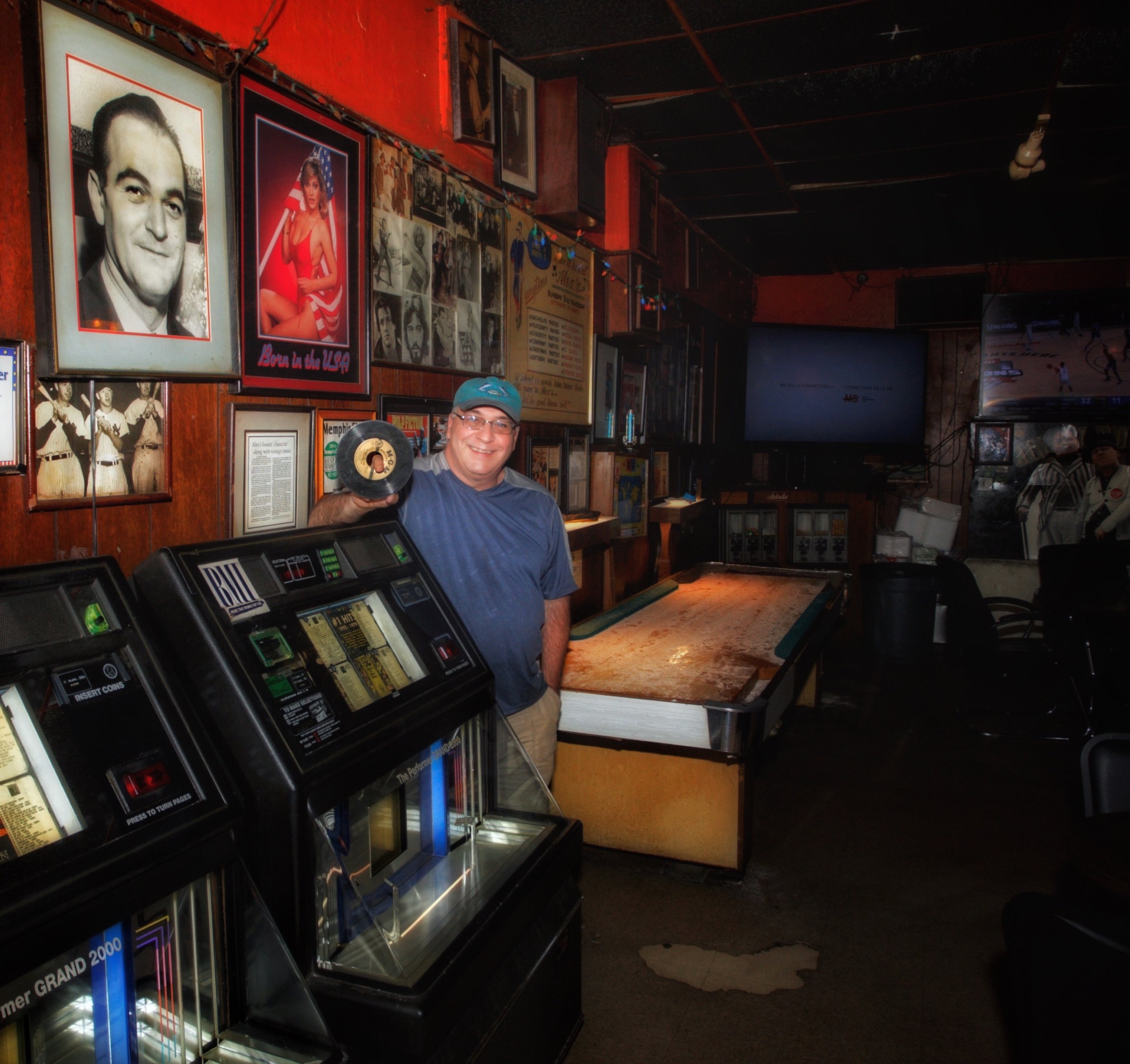 His father was the founder and namesake of this particular dimly lit establishment, where the neon signage, the TVs and strings of Christmas lights are among the only things, really, that illuminate what goes on inside. Speaking of what goes on, it’s not that it’s any great mystery. You come to Alex’s for the ambience, such as it is. Or to watch a football game, nurse a beer, hang out, devour a burger or wings—all in hipster-free digs with warped ceiling tiles, where they never open the window shades and where there’s a pair of jukeboxes standing side by side. Say what you want about dives like this, you at least always know what you’re getting when you walk into a bar like Alex’s. It’s so old school they still don’t take credit cards.

It’s a place where nothing is beautiful and everything is perfect.

Chances are, you come here often enough to start venturing in through the back door and you’re likely to catch Rocky in his office grilling patties. Yes, that’s a grill squeezed into the back, a foot or two away from the desk and the phone and stacks of papers. “How do you like your burger?” he asks a guest in earnest on a recent night, while other regulars poke their heads in, and a trio of cops follow not long after to score some burgers of their own.

Rocky is in his element, carrying out the plates when he’s done, fetching beers, in constant motion. 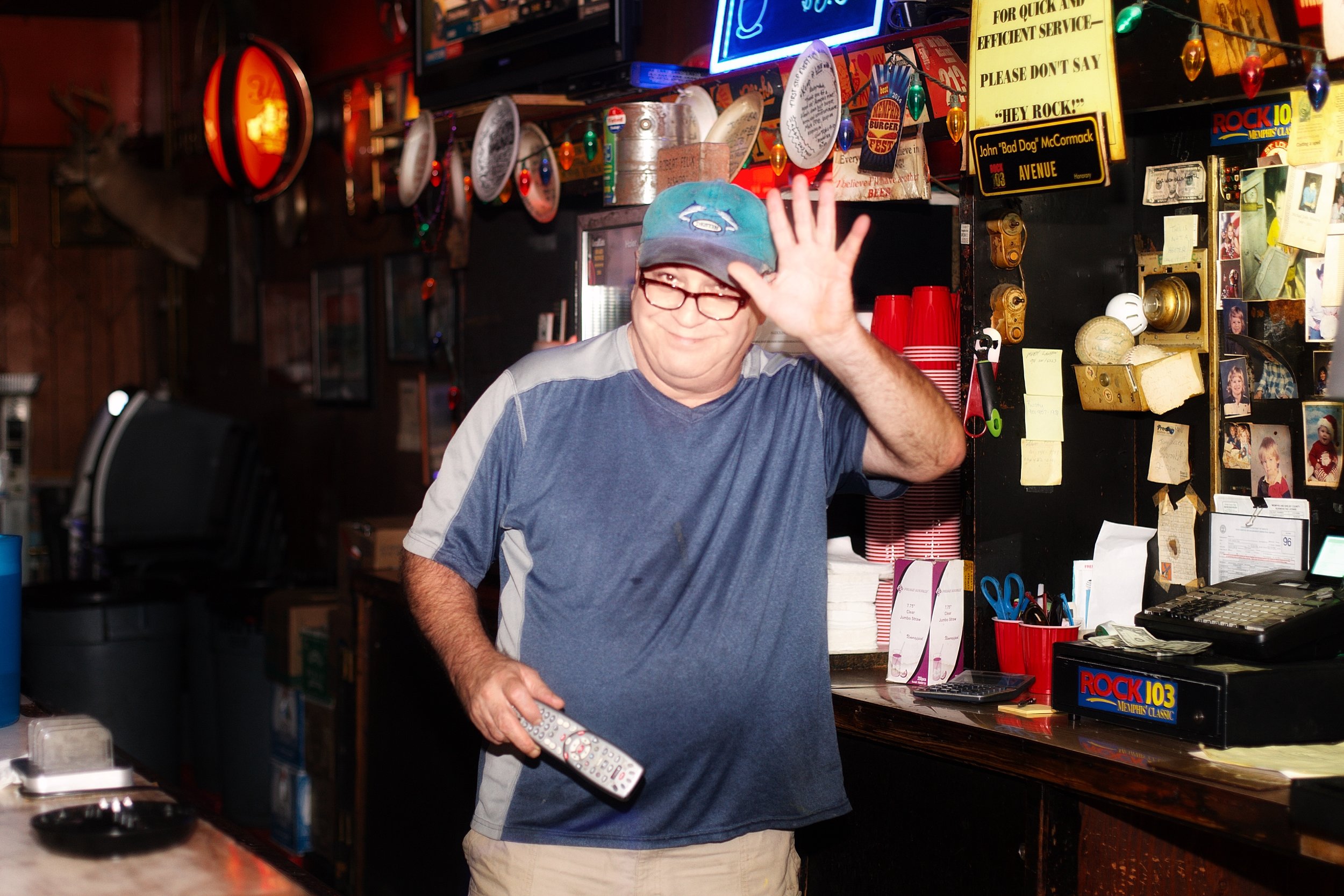 Rocky says, reminiscing while assembling a burger and piling a mountain of thick fries onto a plate. “You can have the rich guy at one end of the bar, the poor guy at the other end; it doesn’t matter. You treat everybody the same, everybody with respect.” 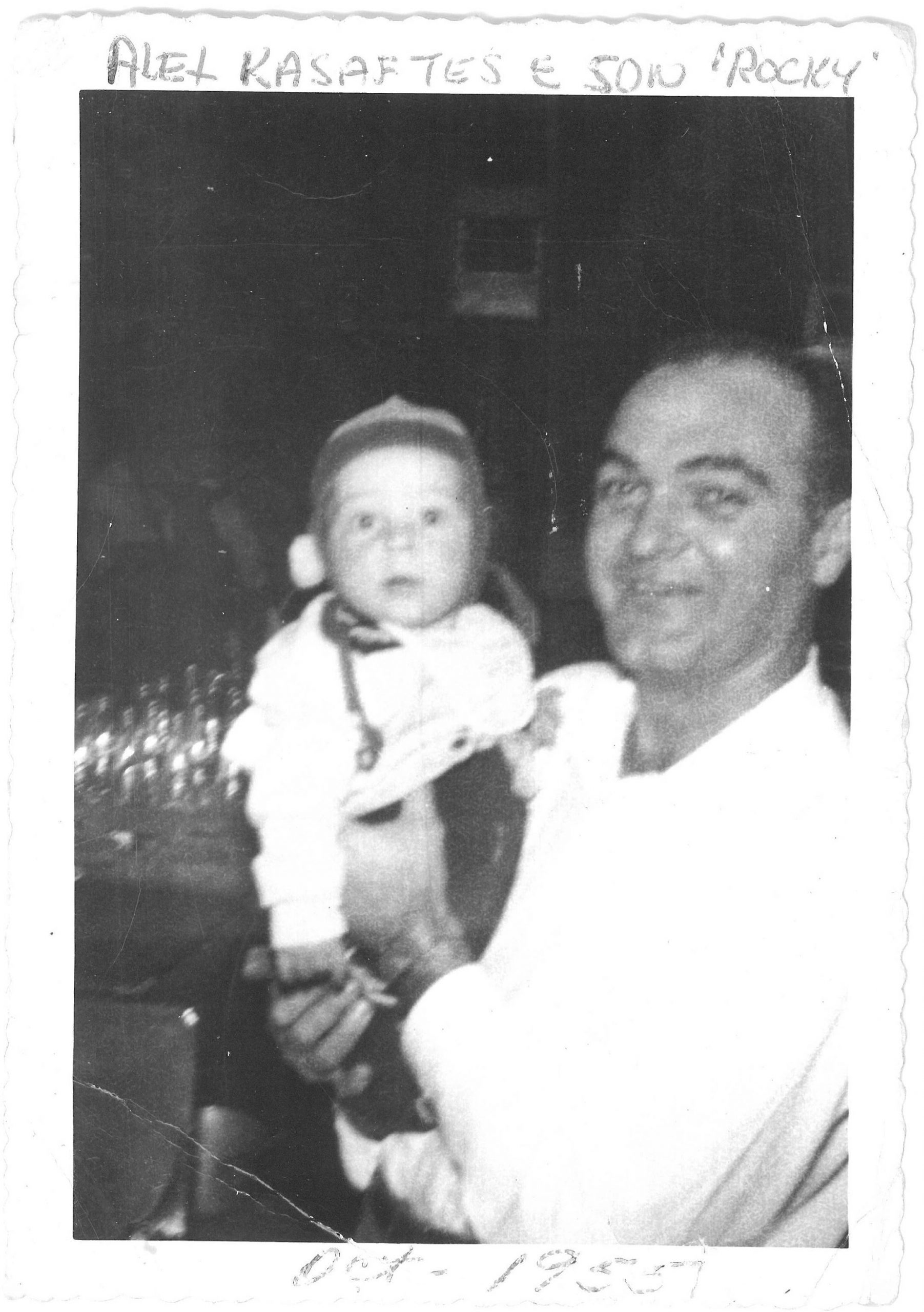 His “tough as nails” father, Alex—there’s smiling Alex’s picture on the wall—put four-year-old Rocky to work scraping away the gum under the tables. By the mid-’70s he was working two nights a week behind the bar with John “Bad Dog” McCormack. Not surprisingly, the well-known radio personality was partly responsible for the second jukebox.

“Dad’s jukebox had all the old stuff—Glenn Miller and Artie Shaw. John and I looked at the meter and found the ones that didn’t get played too often and swapped them out with Motown and Jimmy Buffett,” explains Rocky. Well, little did they know that the B side of “Come Monday” would accidentally get played while Alex was around.

The B side is “Why Don’t We Get Drunk” which, as you may or may not remember, continues with the lyrics “and screw.”

Rocky continues, “Dad screamed, ‘Who put a song on there about screwing?’ He went through the roof! Eventually we convinced him to get a second jukebox for us.” 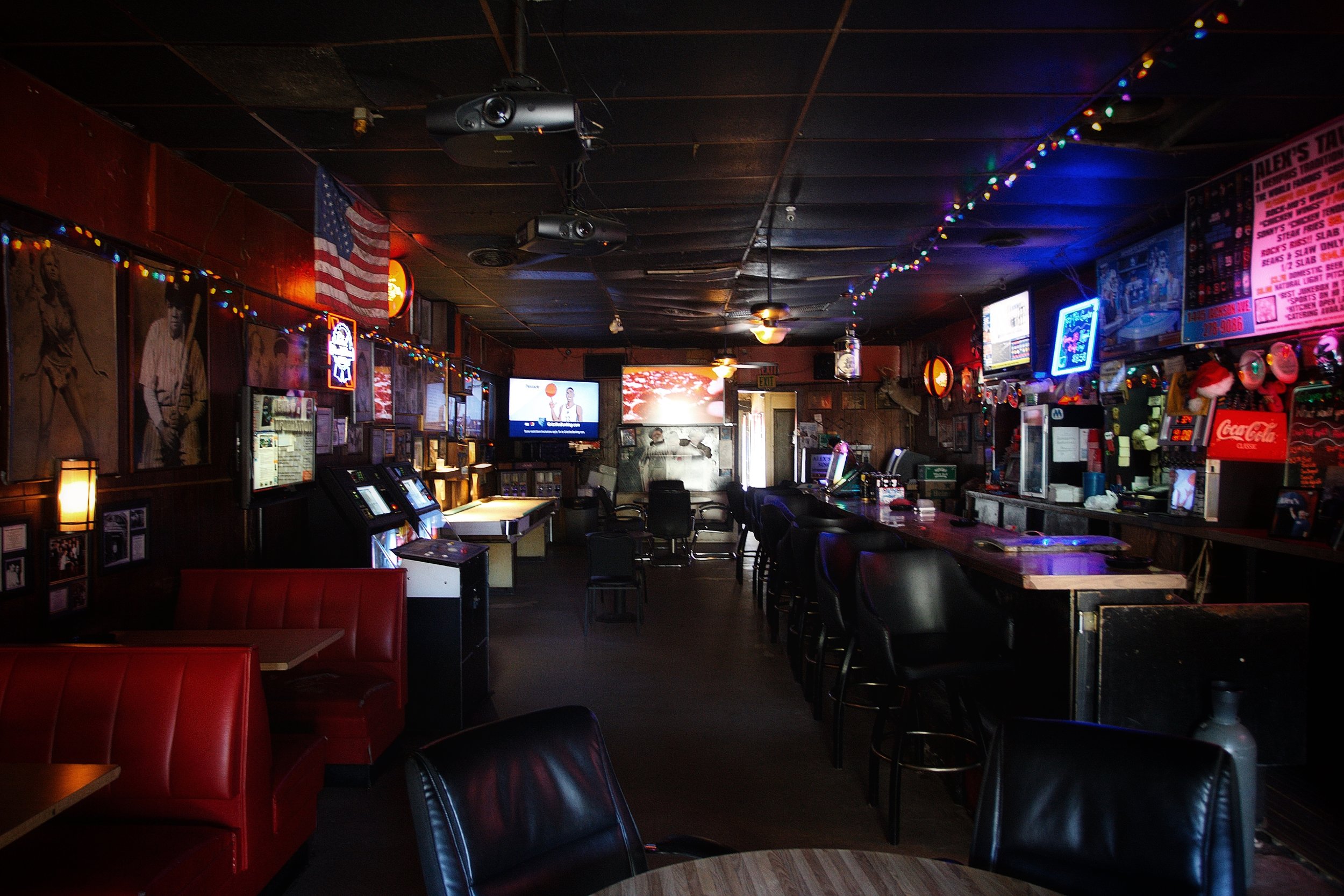 When his father died in the late ’70s, it wasn’t immediately clear that Rocky would carry the bar’s mantle or that Alex’s would even stay in the same place.

Rendezvous restaurant founder Charlie Vergos eventually offered the son some words of wisdom. “He was so nice to me when my father died,” Rocky said. “He said, ‘Rocky, anything you need, you call me. I’ll be glad to help.’

Alex ran the place for 25 years. Rocky has done it for almost twice that long now, so you could say he’s figured out how to make people come to him—whether it’s the college kids, sports fans or the old married couple on a recent night who just wanted to sit at the bar and talk to each other. Rocky’s a father himself now; he’s got a daughter in her 20s, which means he’s old enough and smart enough to know that when you’ve got a good thing going, you certainly don’t jack around with it.

He jokes that he puts something new on the menu maybe every 20 years. 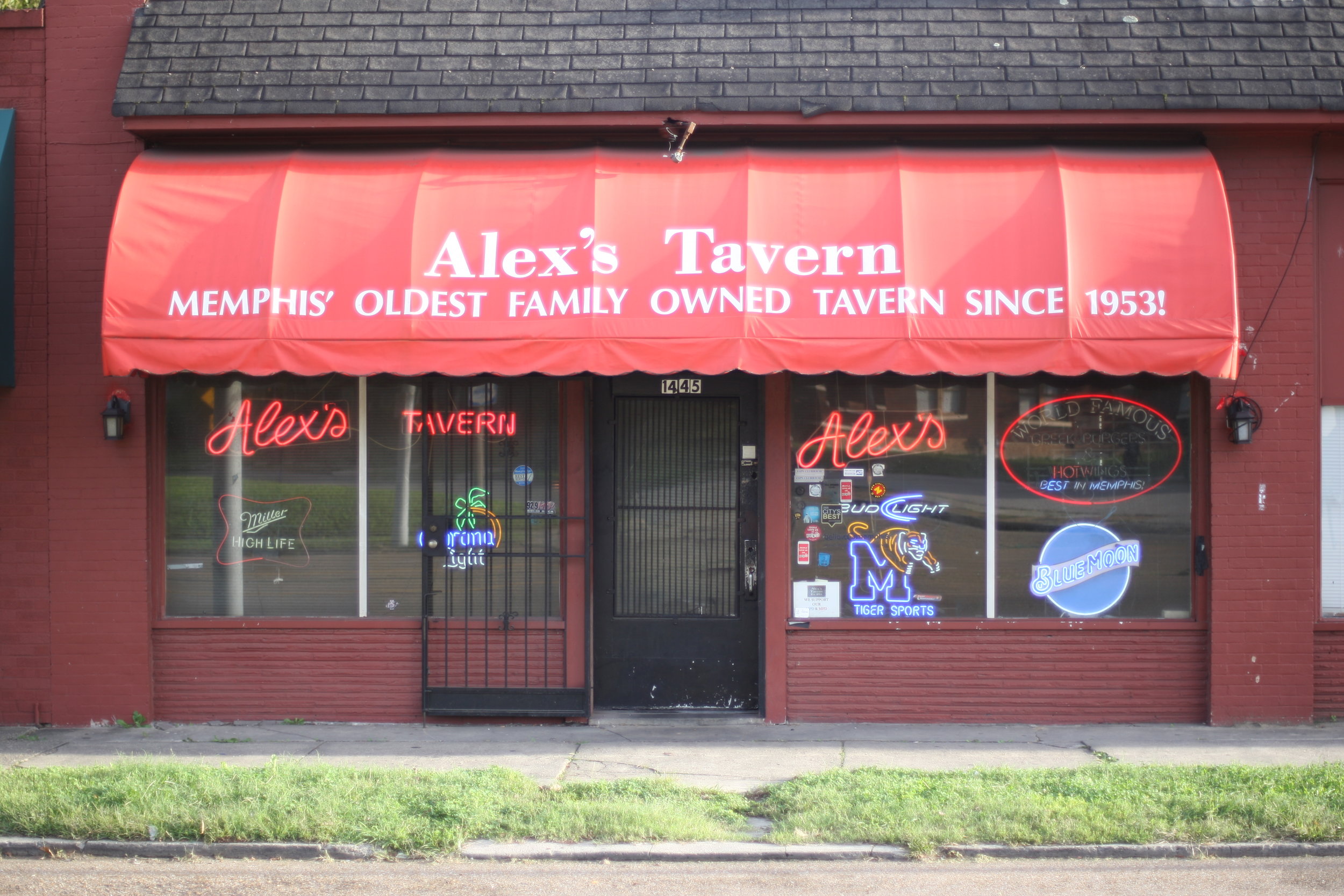 It’s certainly interesting to ruminate over that, about the constancy of an institution like Alex’s, at a time when the food scene in Memphis is as exciting and robust as it’s ever been. From fine dining to food trucks, there’s no shortage of grub to whet the appetite of the city’s increasingly discerning foodies.

The more things change, the more a certain kind of place stays the same and holds on tight to tradition.

You see that at many of the neighborhood bars around the city, divey watering holes that all are trying to thread that needle of giving the regulars what they expect while managing the need to actually, you know, make money.

The neighborhood bar is actually a fragile kind of concept—simple in theory, trickier than it looks to execute.

There’s a certain level of authenticity that’s expected, which is just another way of saying the place ain’t supposed to have that new car smell. But you can go too far the other way with the grit and grime and make people feel like someone has surely shuffled off the mortal coil somewhere in here. It’s got to feel like home. And the food, of course, needs to leave you walking out with a smile—the kind of smile you don’t get from foie gras and multi-colored drinks of dubious provenance. 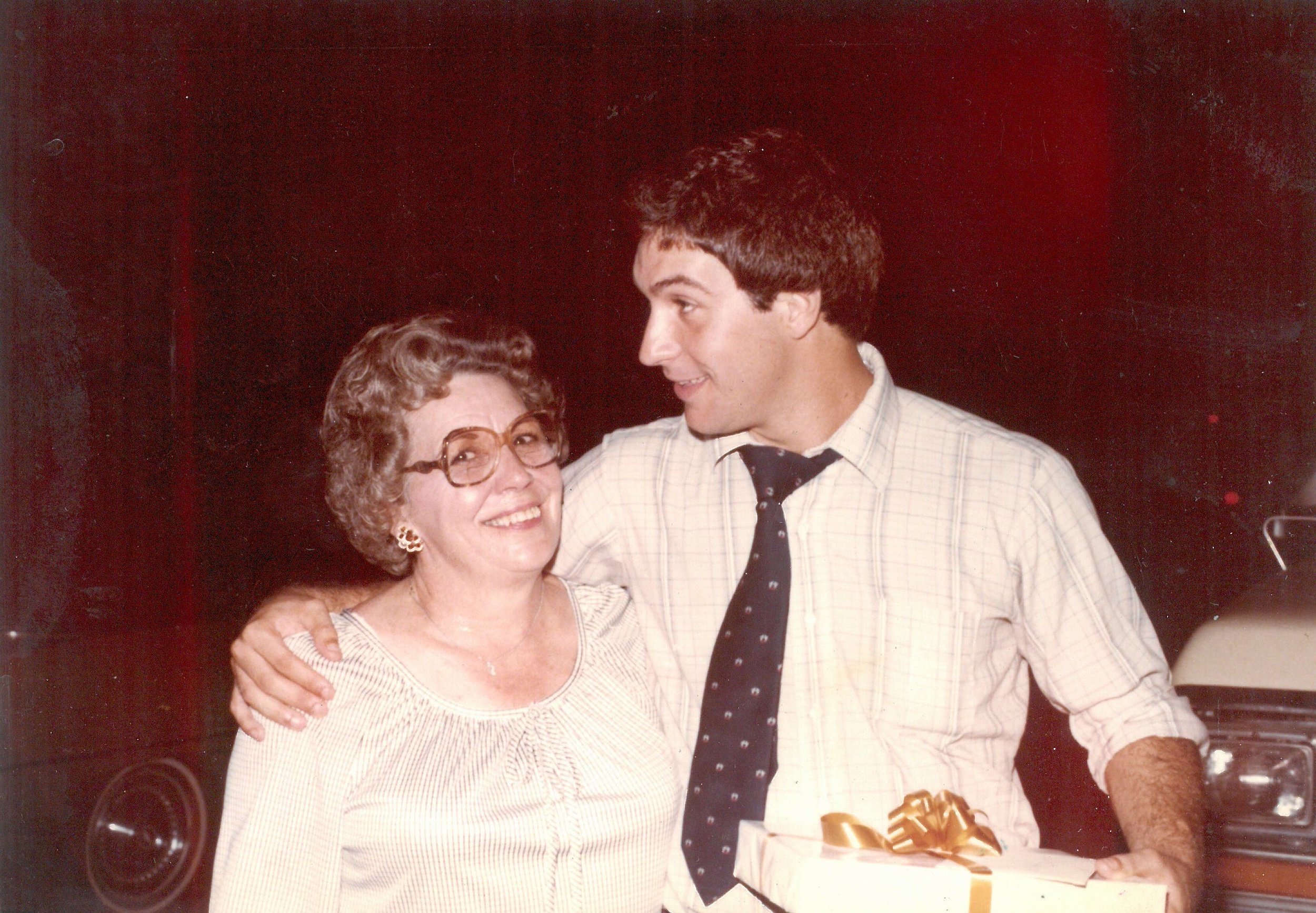 Rocky’s dad opened Alex’s a few years after Vergos, who was a family friend, opened the doors at the Rendezvous. Rocky grew up at the bar, running it as a teenager with his dad. Time was, the only food you could get at Alex’s was a ham sandwich, the ham compliments of Alex’s mom, Eugenia (aka Momma K), who’d baked it at home. Eventually, Alex’s added the artery-clogging stuff of dive bar dreams. In addition to the famous Rocky burgers and Greek wings, there’s Rock-Mo’s gumbo (which may be the best-kept secret in the city) and ribs that are smoked outside the back door. Customers can also get a taste of Momma K’s veggie beef soup that Rocky makes on the regular. He can also put together a fine grilled cheese sandwich with pickles for the vegetarians (like Priscilla Presley, who just happened to stop by on a recent Thursday night). 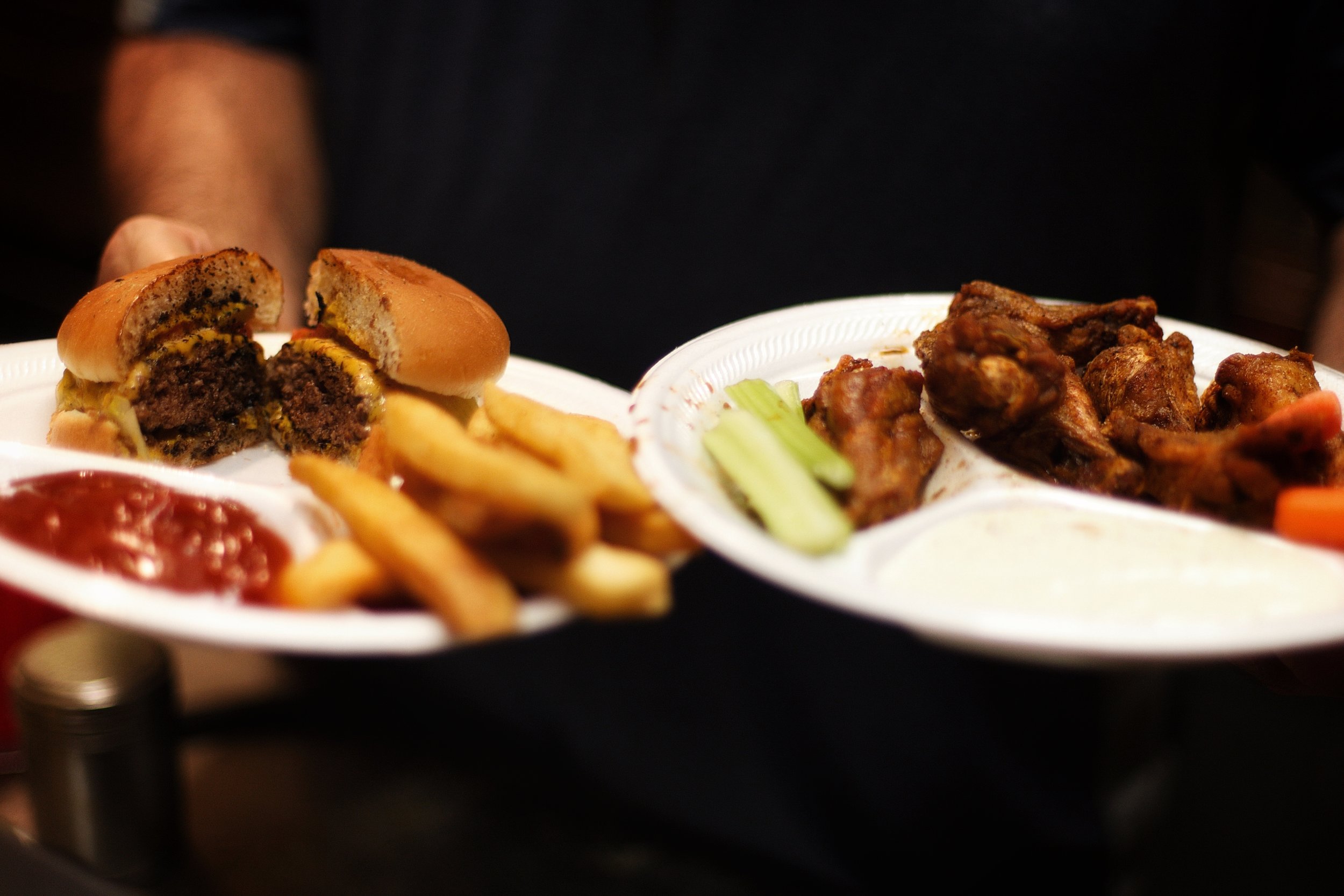 It’s certainly not the sexiest work in the world. Rocky’s daily routine is pretty basic. He lives in High Point Terrace, where he grew up, and his first stop of the day is to hit the store, grab some meat and buns, onions and other fixings. He then heads down to the bar to get set up and going.

It’s a working man kind of routine, the kind you know his dad would approve of.

“My dad, he always pulled for the underdog,” Rocky remembers with a smile. “He would give you the shirt off his back if he liked you. But he was always like, ‘Don’t take any crap off anybody either. Treat everybody with respect, but if they get outta line, they gotta go.’” 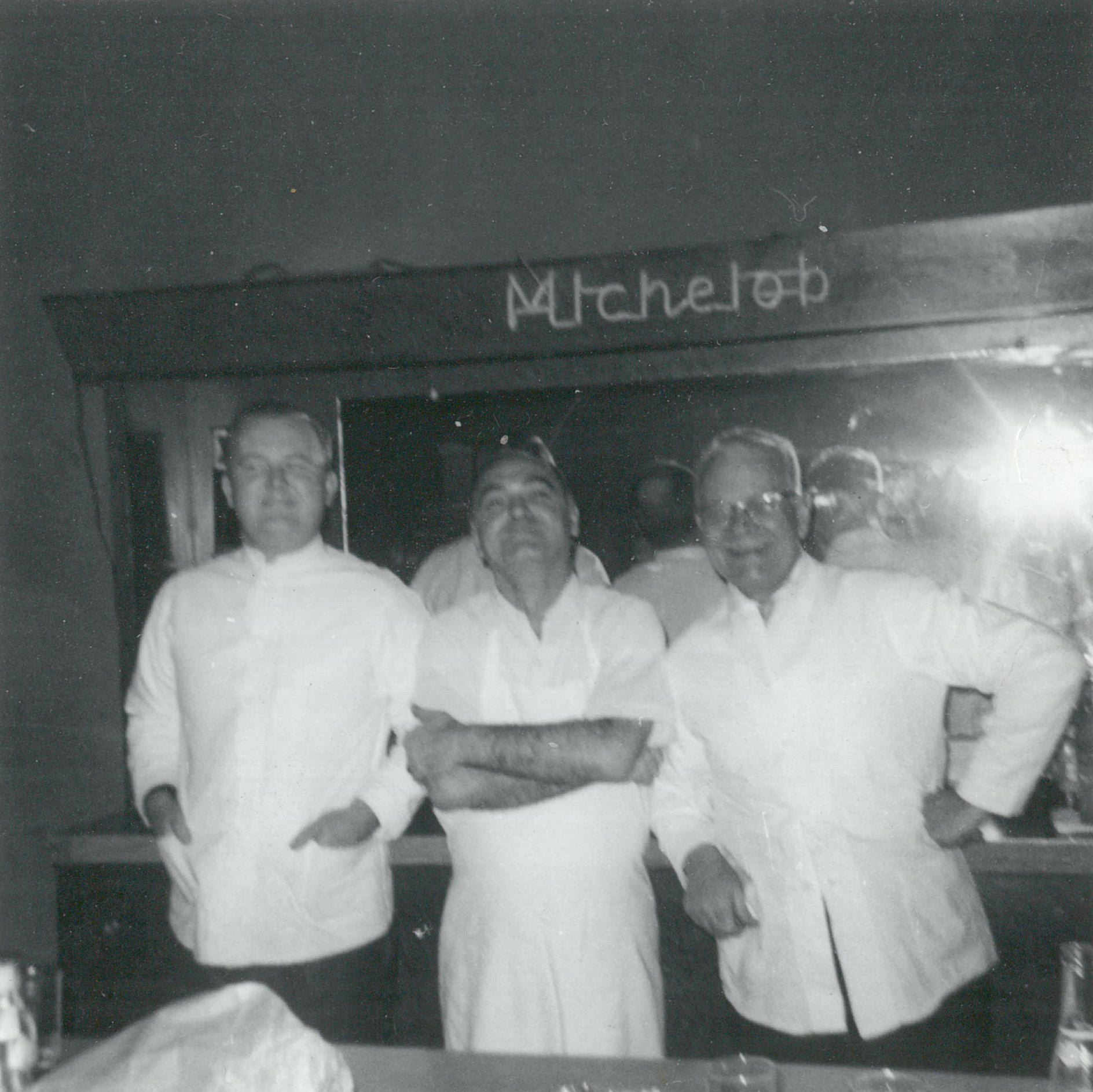 “What if there’s a meathead who’s bigger than me who’s causing problems in the bar?” Rocky asked his dad one day. “Doesn’t matter,” the old man answered. “Fight back harder.”

In so many words, he then handed down an absolute, non-negotiable truth about owning a bar—no matter what, you absolutely cannot, in any way shape or form, get your ass kicked in your own bar. 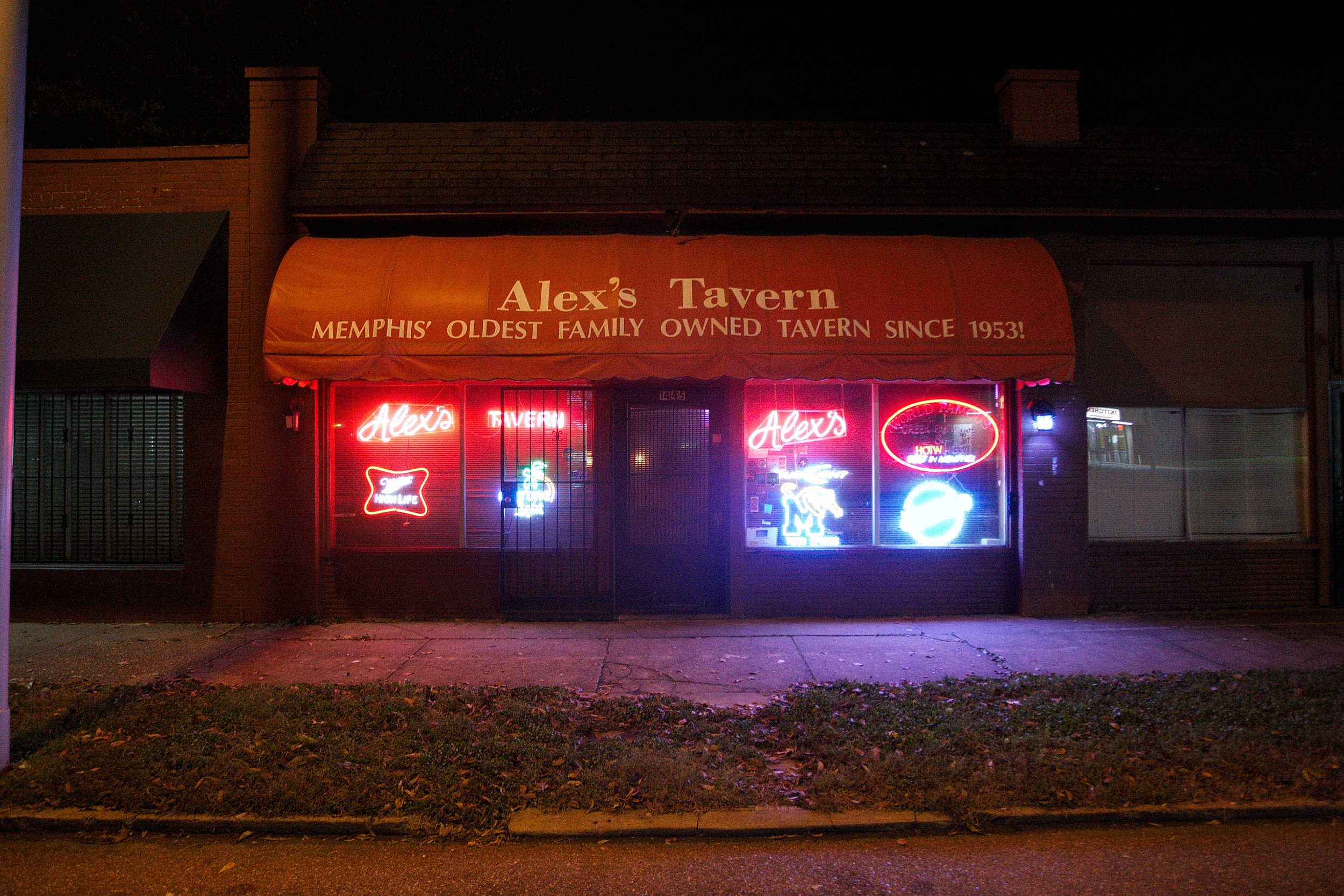 Tiger Bryant, whose restaurant interests in Memphis include Soul Fish Cafe, describes Rocky as very much the caretaker of a particular legacy with Alex’s, in that he embodies the idea of an old-school neighborhood tavern owner. As proof, he cites one particular day when Rocky’s car was broken into. The thief apparently thought he was swiping a bag of money he saw sitting in view—but turns out it was a bag of thank-you notes. Notes Rocky had written to regulars of Alex’s who’d come to pay their respects upon learning that Rocky’s mother had passed away. As fate would have it, Tiger recalls, the next day or so a guy shows up at Alex’s with the bag of thank-you notes, having gotten it from someone else to return. “Rocky stays connected, especially to the older neighborhood members,” Tiger says.

“Whether you’re a student, part of the third shift in Memphis, a sports fan—the stories and food remain consistent. Incredibly hard to accomplish in the current ‘chase the fad mentality’ a lot of bars follow.”

With his grin, and that sing-song voice, Rocky can seem like he doesn’t have a care in the world, when you know good and well that definitely is not the case. Next time you’re there, look for the old guy in the cap, the guy who’s smiling, trying to get everything just right, the way his dad would approve of, the way the thing is supposed to be run. And then you’ll get it; you’ll see. “This is kind of like an oasis here,” Rocky mused on a recent night.

“People told me I’d never make it on this corner, but I’m stubborn and don’t know when to quit. And all these years later, we’re still here.”

Richard Lawrence takes pictures in and around the city of Memphis and the Mid-South. You can find him on Instagram @sundayinmemphis.