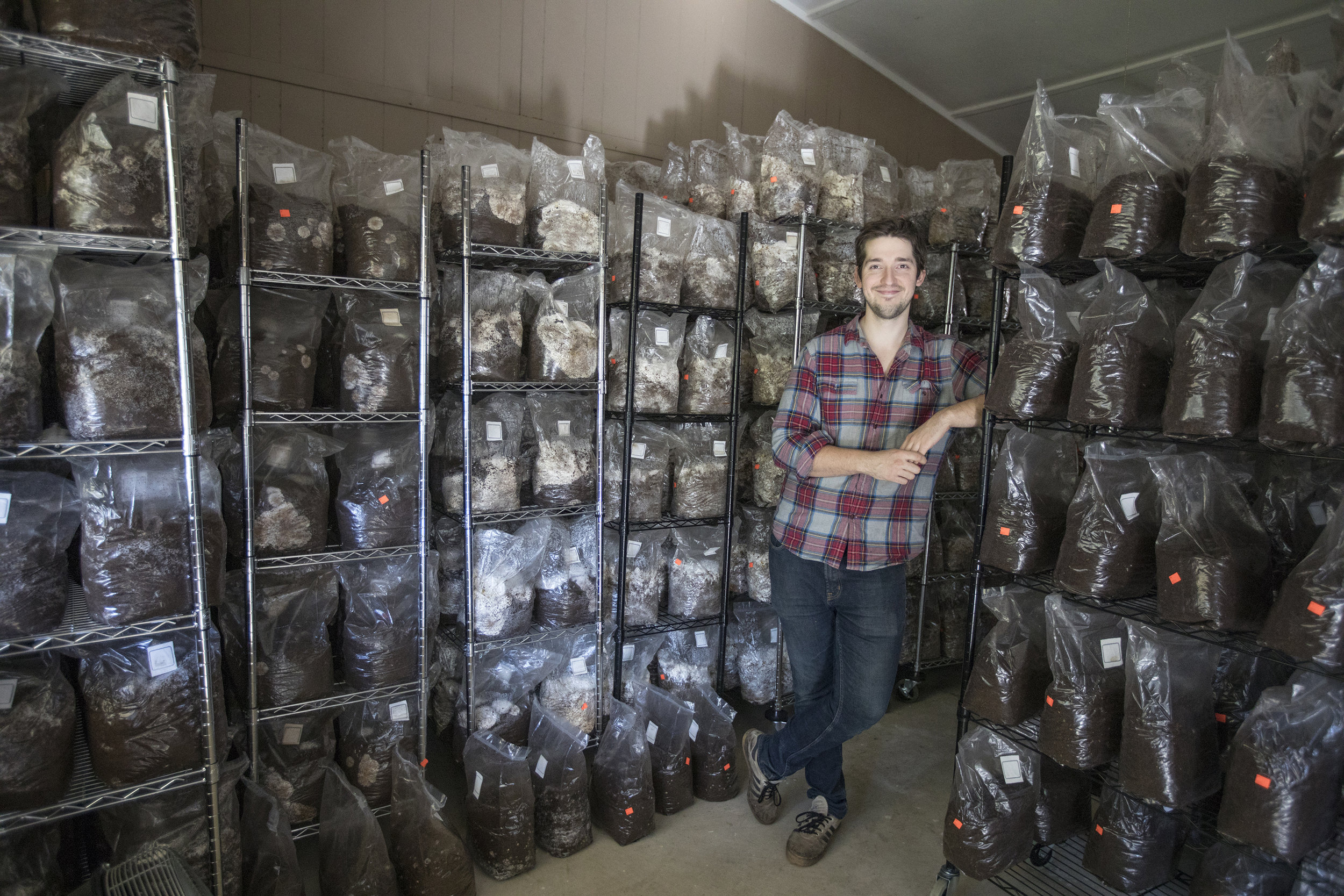 Locally grown shiitake, lion’s mane, oyster, hen of the woods, and chestnut mushrooms are popping up all over town—

in restaurants and at the farmers markets—thanks to Scott Lisenby (pronounced “Listen Bee”), who launched Bluff City Fungi in 2013.

“I love the creation of it all—seeing the process through from start to finish. Seeing people geek out about the mushrooms we are dishing out is amazing. This is my dream job,” he says.

The entire Bluff City Fungi operation includes four freestanding buildings and is in Sherwood Forest, a residential area near the University of Memphis. “We have a pretty sizable lot, which is perfect for all the equipment needed to be successful at vertical farming,” Scott says.

Scott’s property is like a page out of a Dr. Seuss book or scene from Willy Wonka and the Chocolate Factory. Everything is precise, yet chaotic. Odd, yet striking. Not to mention the efficient use of space. Every inch is used for something. From piles upon piles of mushroom debris waiting to be composted to the front-of-house packaging efforts, it’s no wonder Bluff City Fungi has positioned itself as the leader in Memphis’s mushroom game. 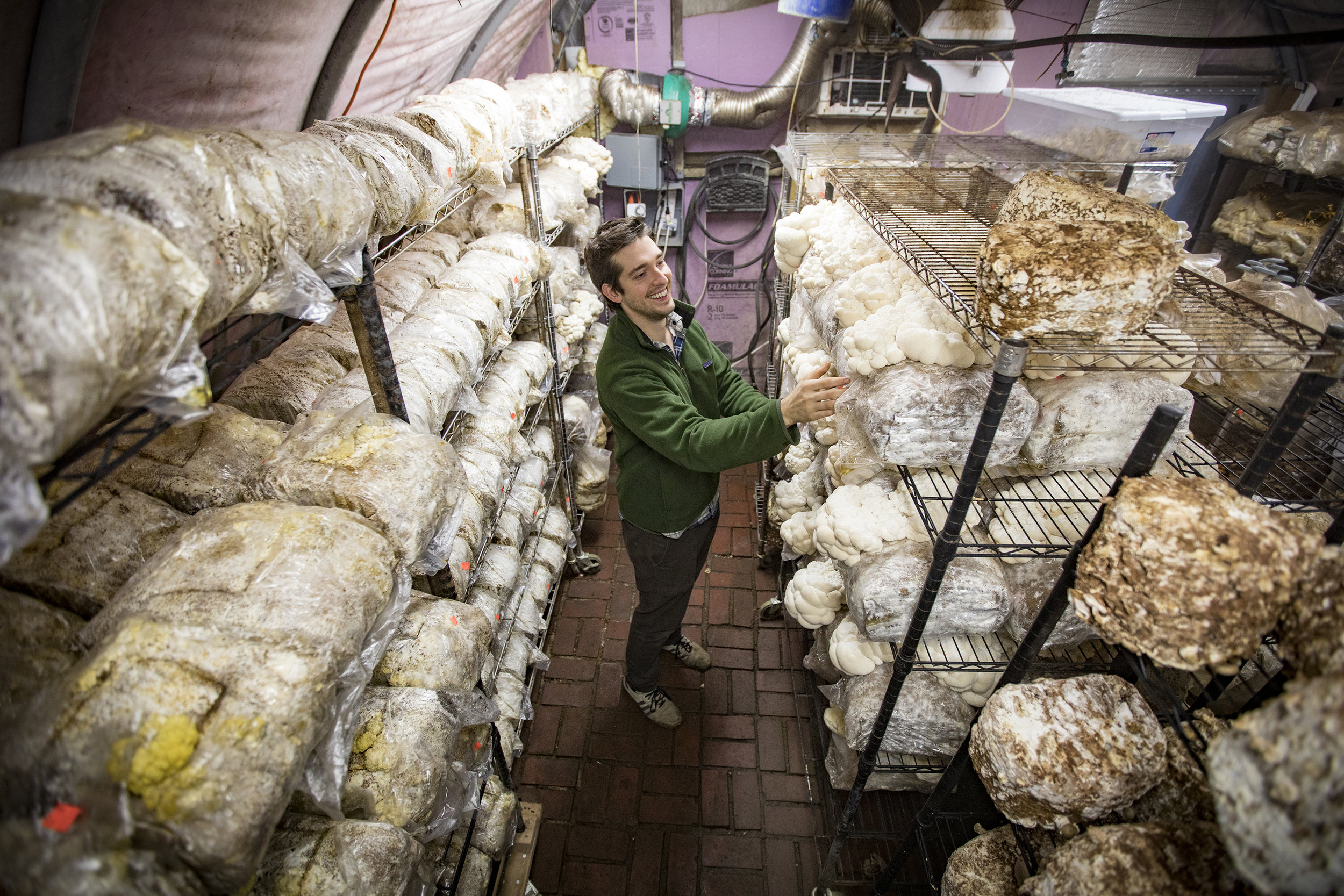 Vertical farming can mean a number of things depending on who you ask, but for Bluff City Fungi it simply means growing upward and utilizing vertical space, usually associated with an environmentally controlled setup.

“Almost all exotic mushroom farming is done this way, so it’s nothing unique, but we have adapted these commercial techniques and efficiencies on the small scale to do more using less. Being lean is a huge part of our mentality,” said Scott. 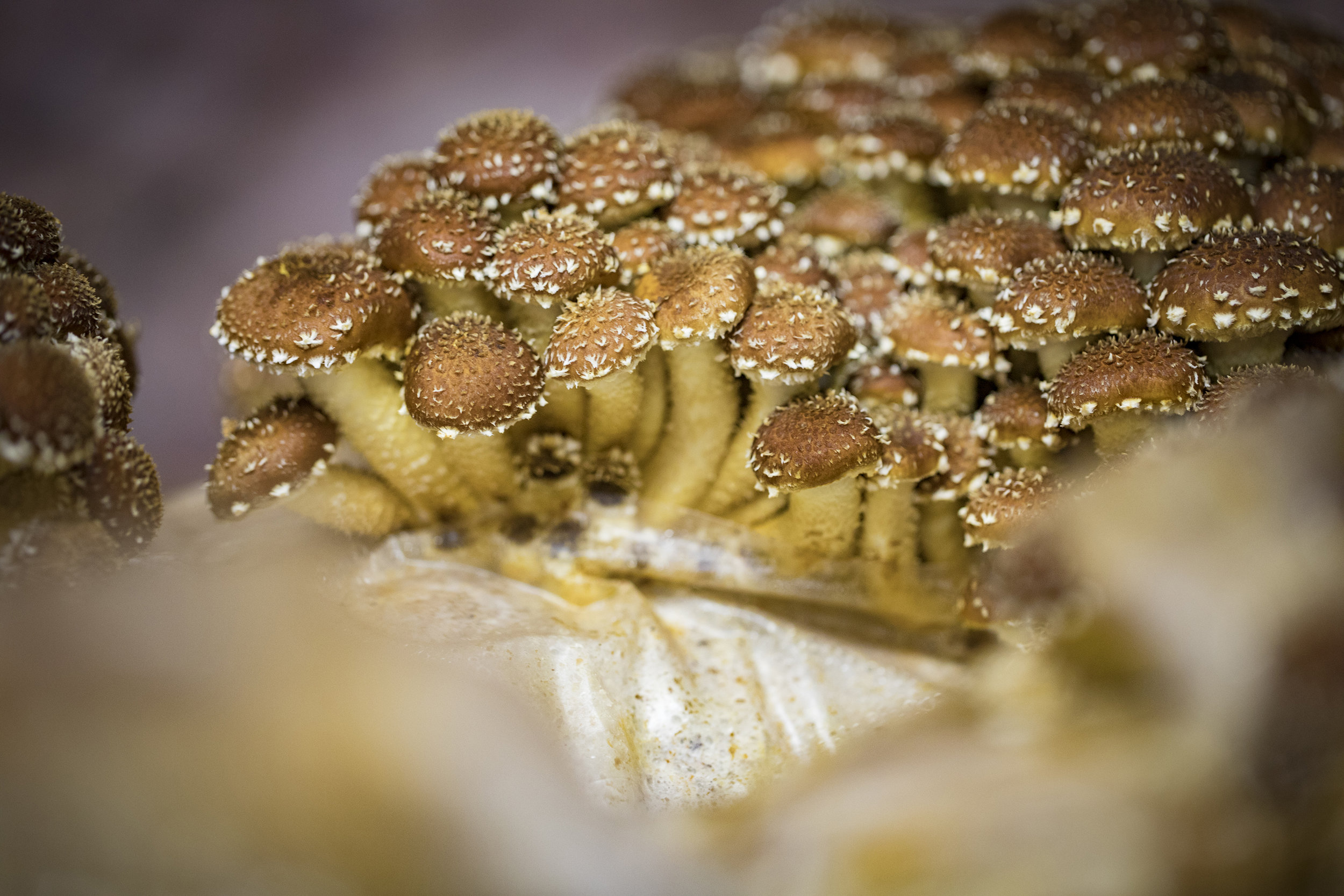 Generally the mushroom-growing process goes: spore to petri plate to grain to sawdust to mushrooms.

“Each stage is just as critical as the one before it since our weeds (competitor molds) are floating all around us all the time,” explains Scott. “We are making the most rich and expansive environment to grow mold—and the challenge is making the environment perfect to grow only what we want.”

A single spore from a single mushroom is used to grow an entire crop. If competitive molds take over the environment, everything can get corrupted. Scott is fascinated by the science of mushrooms. He says it’s always a battle to create a bountiful crop. Everything is based on temperature and light. Scott really needs to know his stuff because one bad calculation can mean the loss of a full crop. From professional HVAC controls to humidifiers, the cleanliness and sterilization of the environment are paramount to the success and growth of the business. 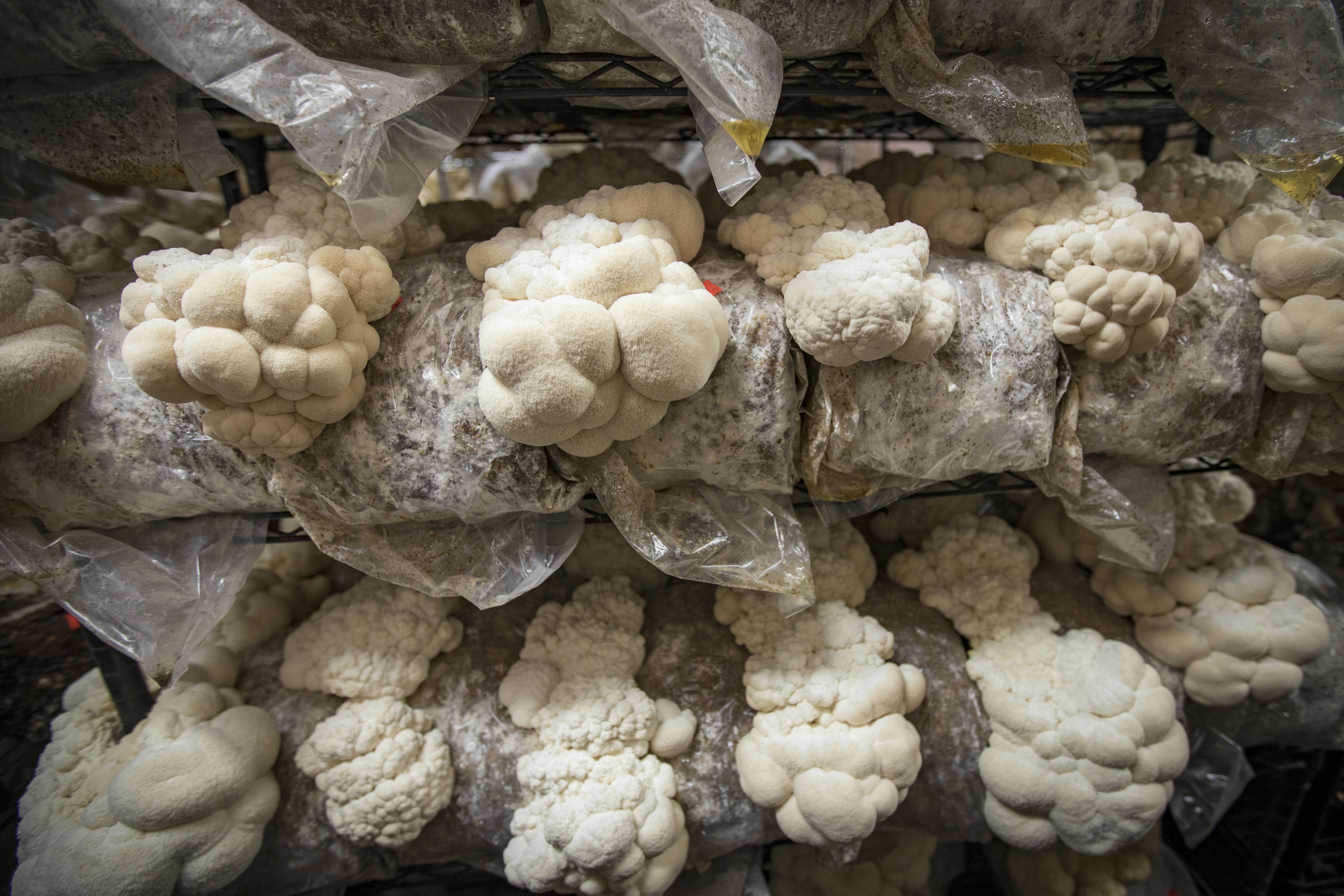 Jade Edmondson helps Scott with the day-to-day operations to make sure business is thriving. “I help out with everything from mixing substrate to prep for sterilization, inoculating bags to set out for incubation, moving fully colonized bags from the incubation room to the greenhouse when ready to fruit, cleaning the green room and lab, and picking the beautiful fungi when fully fruited to pack up for deliveries and farmers markets,” she says.

Jade says that she really enjoys working with Scott because he’s very passionate about his business and is always working to improve it. “He’s definitely one of the most determined people I know. I’m constantly impressed with what he has accomplished and I’m so grateful to be a part of it,” she says, her passion for the work shining through. 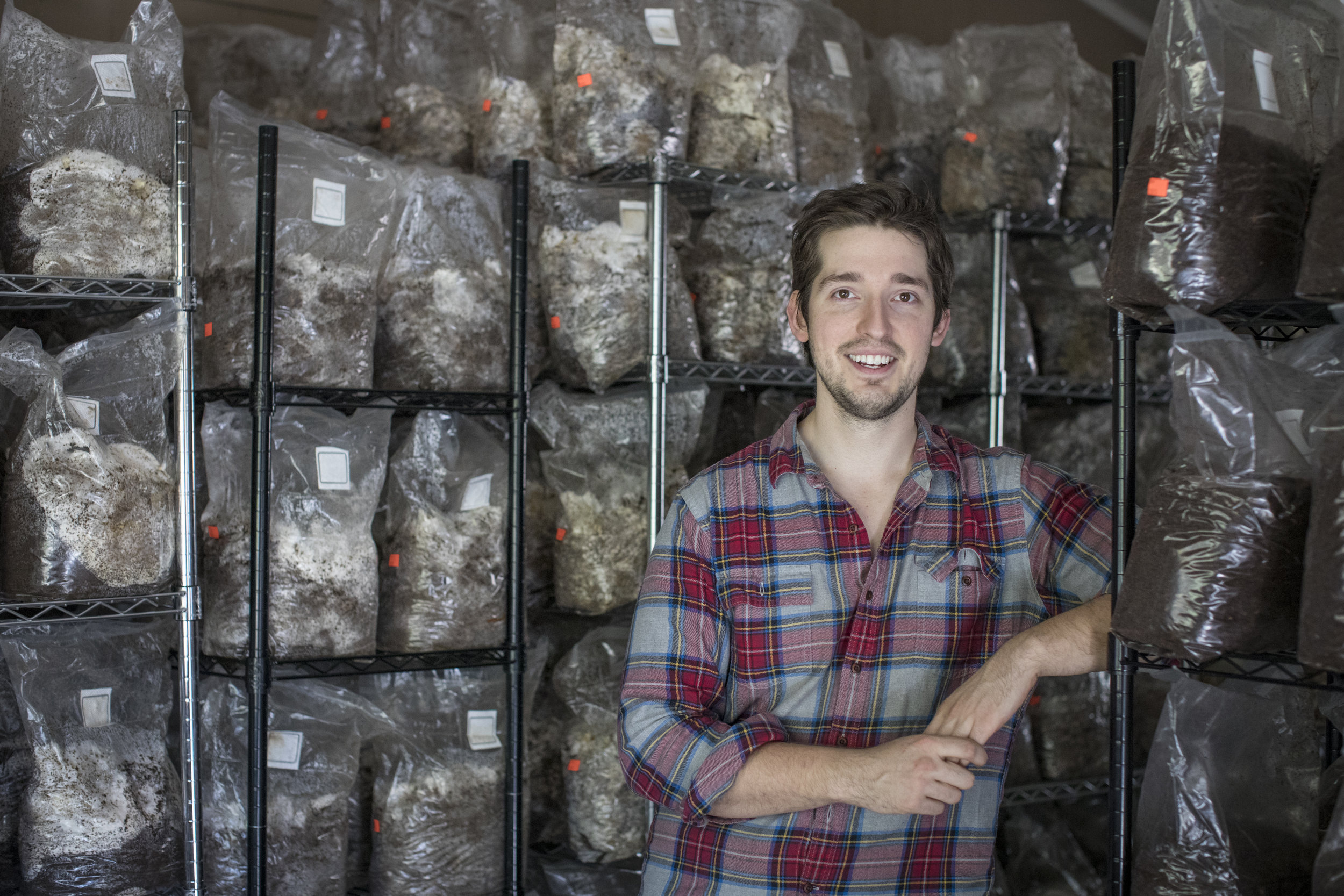 Scott’s other part-time employee is his mother, Patti Young. While they argue on occasion, Scott doesn’t know what he would do without her on the team. She’s in charge of deliveries, among other things.

“My mom has always been ready to hop in and help any way she could, whether it was mushroom farming or even back in my produce-growing days she was our number one volunteer and supporter,” says Scott. “It’s a little cliché, but she is the hardest-working person I know and I’ve definitely inherited her drive and focus.”

Patti says that she feels fortunate to be able to earn a living doing something she believes in and loves. “Not many people get to say that in their lifetime,” she adds. 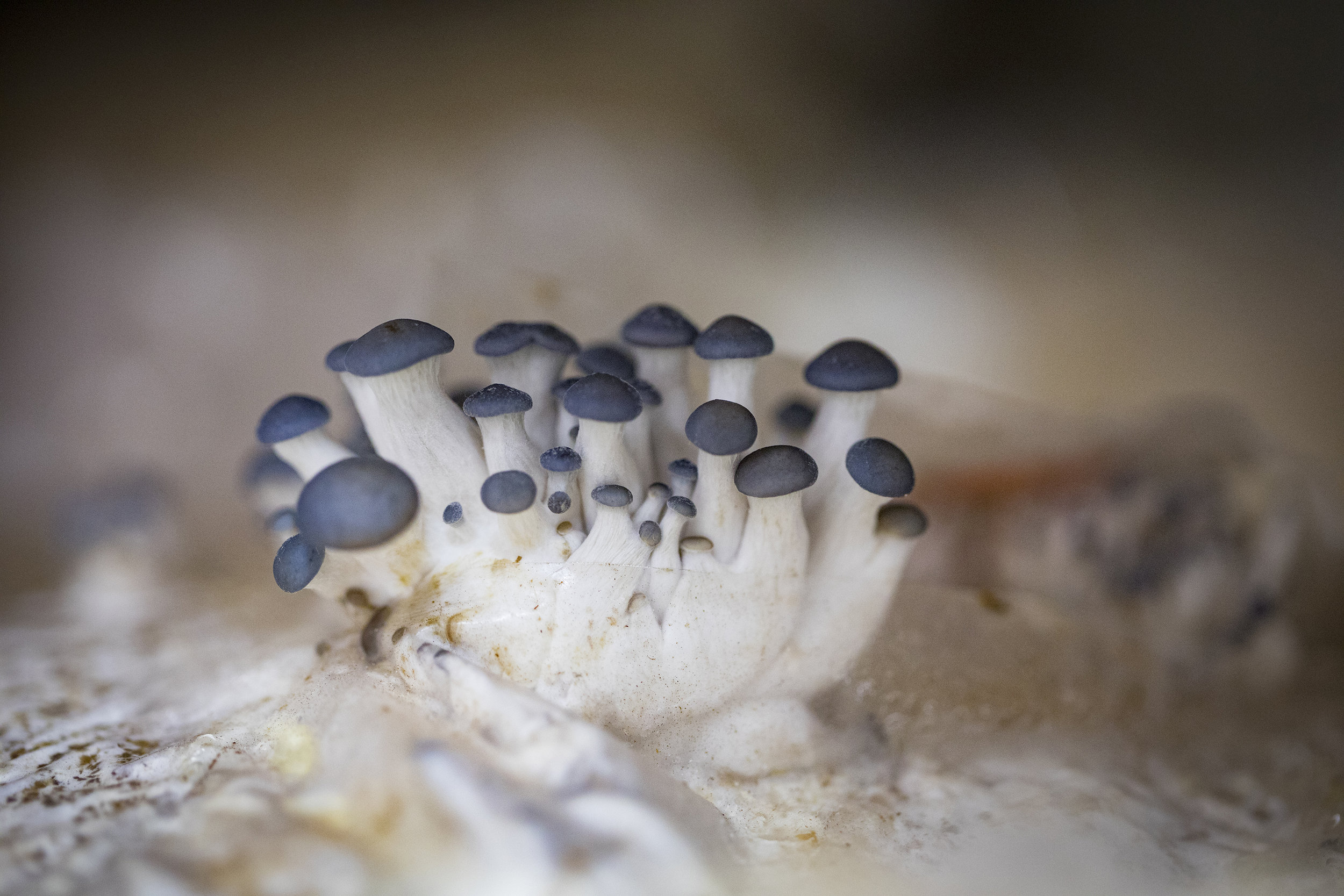 Mushrooms are all the rage as local chefs are trying things they’ve never tried before. “People want something local and new. Mushrooms are fresh options for all kinds of dishes,” says Scott.

“Mushrooms are incredibly delicious and good for you. From regulating blood sugar and blood pressure to improving the immune system, mushrooms have a lot to offer.”

Chef Zach Nicholson of Lucky Cat says, “Scott has been a friend of ours since our pop-up days and we are constantly amazed by the quality of his products. Simply put, he grows some of the most beautiful mushrooms I have seen, here in Memphis or anywhere. The importance of what he is doing for our local food scene is immense and I hope that others are inspired by his example of executing his dream with such focus.” 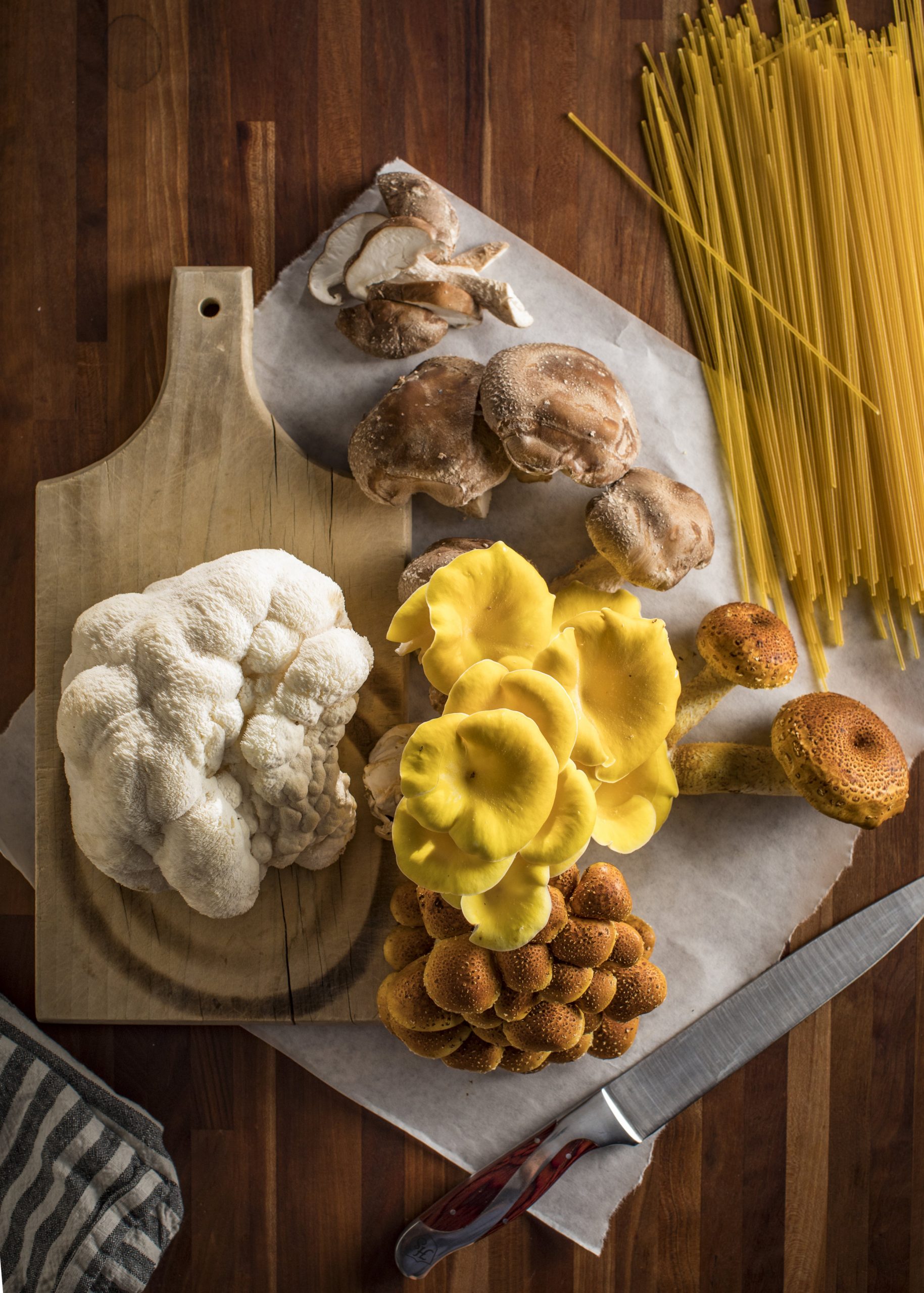 Throughout his years in the service industry, Scott built relationships everywhere he went—relationships he never thought would benefit him later in life when he launched his own company.

“My first client was The Kitchen at Shelby Farms. I worked there and offered to bring in some of my crop,” Scott says. Then, one at a time, more and more restaurants wanted his mushrooms. 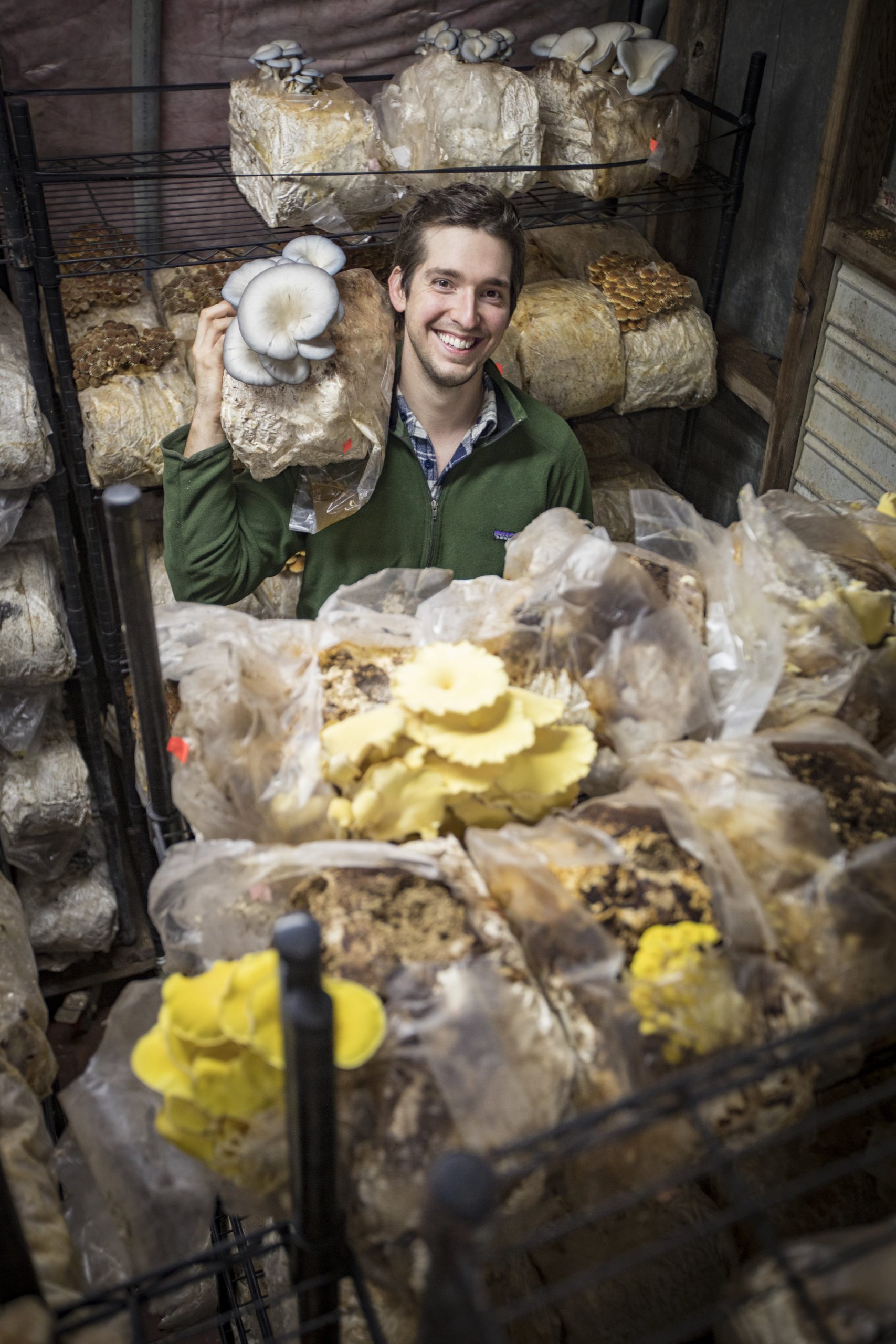 Scott is now delivering to over 25 local restaurants and selling at three farmers markets every week (when in season) in Memphis; he’s a regular at the Nashville Farmers’ Market and has clients in Oxford, Mississippi. Local restaurants served by Bluff City Fungi include Lucky Cat, Interim Restaurant & Bar, Restaurant Iris, The Second Line, Erling Jensen: The Restaurant, Sweet Grass, 117 Prime, Felicia Suzanne’s, Ecco on Overton Park, Tamboli Pasta and more. 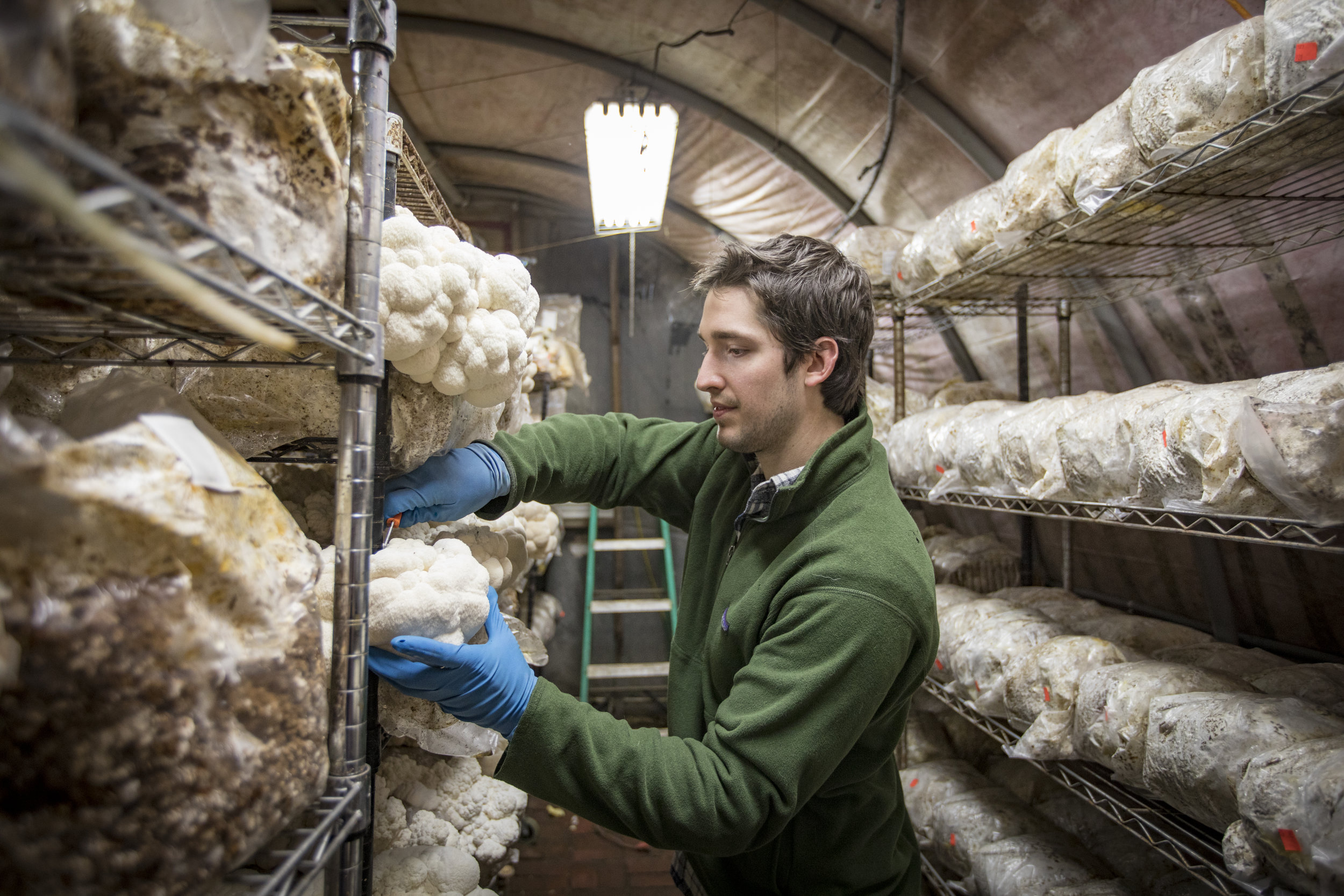 Scott has a hard time saying which local chef has the best mushroom dish on the menu because he believes so many of them are knocking it out of the park, but when pressed, he gives a shout out to 117 Prime. “They make a mushroom medley side dish with rosemary and garlic, and it is absolutely out of this world. Very simple, very minimalist—they don’t hide them or sneak them in a dish. They let the mushrooms shine, which is why it really stands out to me,” he says.

As for the future of Bluff City Fungi, Scott hopes to corner the exotic mushroom market further. “Growth is imminent and palpable, and Bluff City Fungi is primed to pick up the mantle,” says Scott. “Next year we hope to teach classes, consult for other farms and continue to create more fans of fungi.”

These curious-looking mushrooms have a very spongy cell structure. We like to pull them apart into bite-sized pieces, dress them in a little olive oil and vinegar, and roast them in the oven for about 20 minutes. The result can be used in tacos or on pasta. You don’t see these on too many menus around town, but I hope that’ll change as chefs become more familiar with the lion’s mane.

This beautiful mushroom is very versatile. This is one of the many mushrooms whose name gives you a clue to its flavor and how it can be used. We swap this mushroom in for oysters in classic dishes like oysters Rockefeller and the Southern holiday classic, cornbread dressing with oysters.

Hen of the woods

This unusual cluster of mushrooms has a fantastic texture much like chicken. Again, the name tells you all you need to know. We batter and deep fry these in a spicy, Gus’s World Famous Fried Chicken-style breading. They look like fried chicken and they taste like fried chicken. The Beauty Shop serves them grilled over an open flame with sesame, soy and lime. Alongside The Beauty Shop’s truffle fries, it’s a Chubby Vegetarian favorite.

This mushroom has a diminutive cap and is unusual because it’s prized for its thick stem. We slice them into rounds and sear them in a hot pan with a little butter. They’re a great stand-in for scallops since they have a seafood-like flavor and texture. We also thinly slice and grill them and serve them wrapped in tortillas with some punchy guacamole and hot sauce.

Come Down to Como