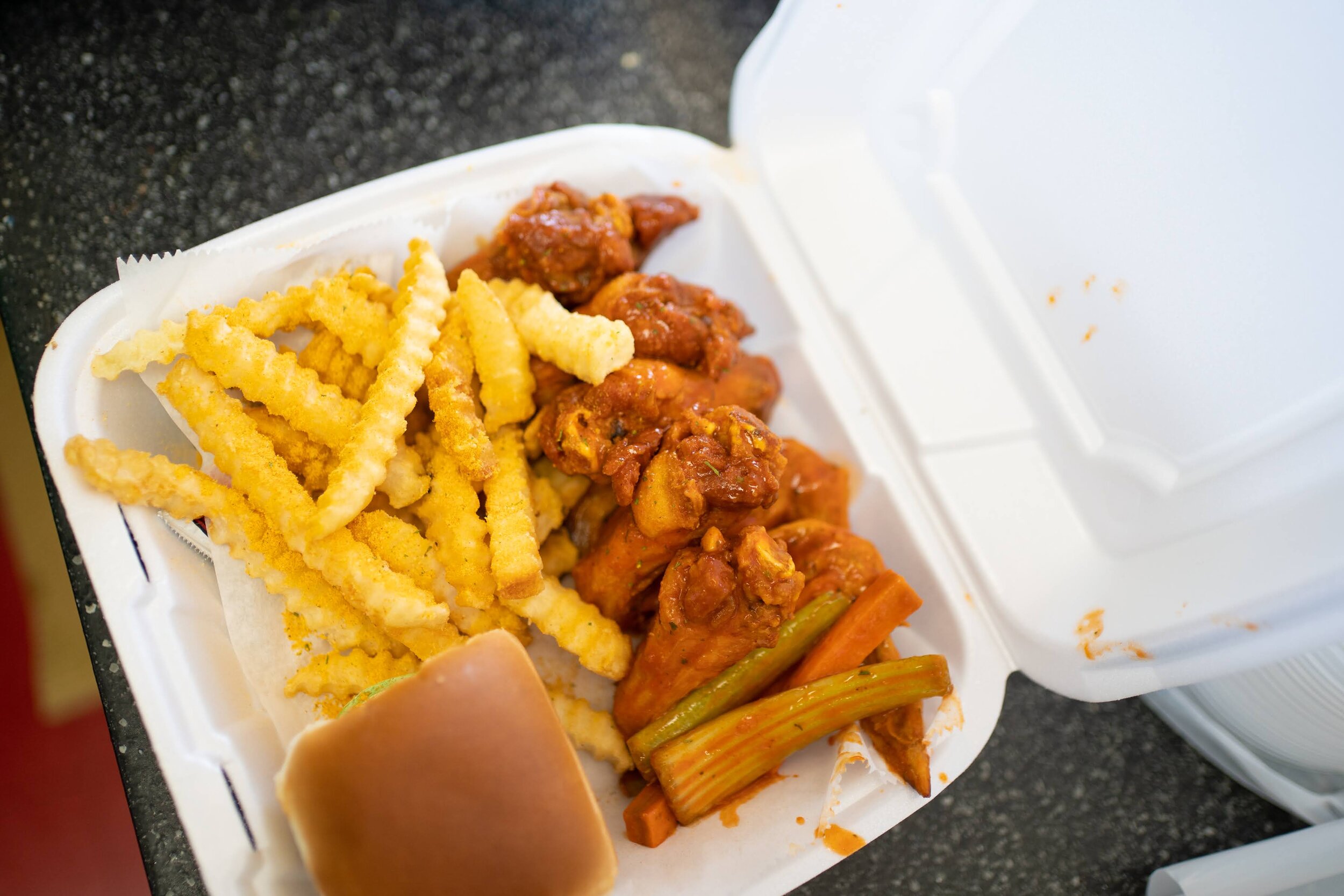 Donald Crump, of Crumpy’s fame, is retiring from the chicken wing business in September after 30 years, leaving an impressive legacy. “I helped everybody—from D’bo’s to Sensational Wings. I can show you my phone. I have set my whole family up.

“Chicken has been good to us.”

Donald’s first job in the kitchen was at TGI Fridays in 1974 after he graduated from high school. By 1985 he was a substitute teacher, and by 1989 he was teaching health and physical education full-time at Vance Junior High School. 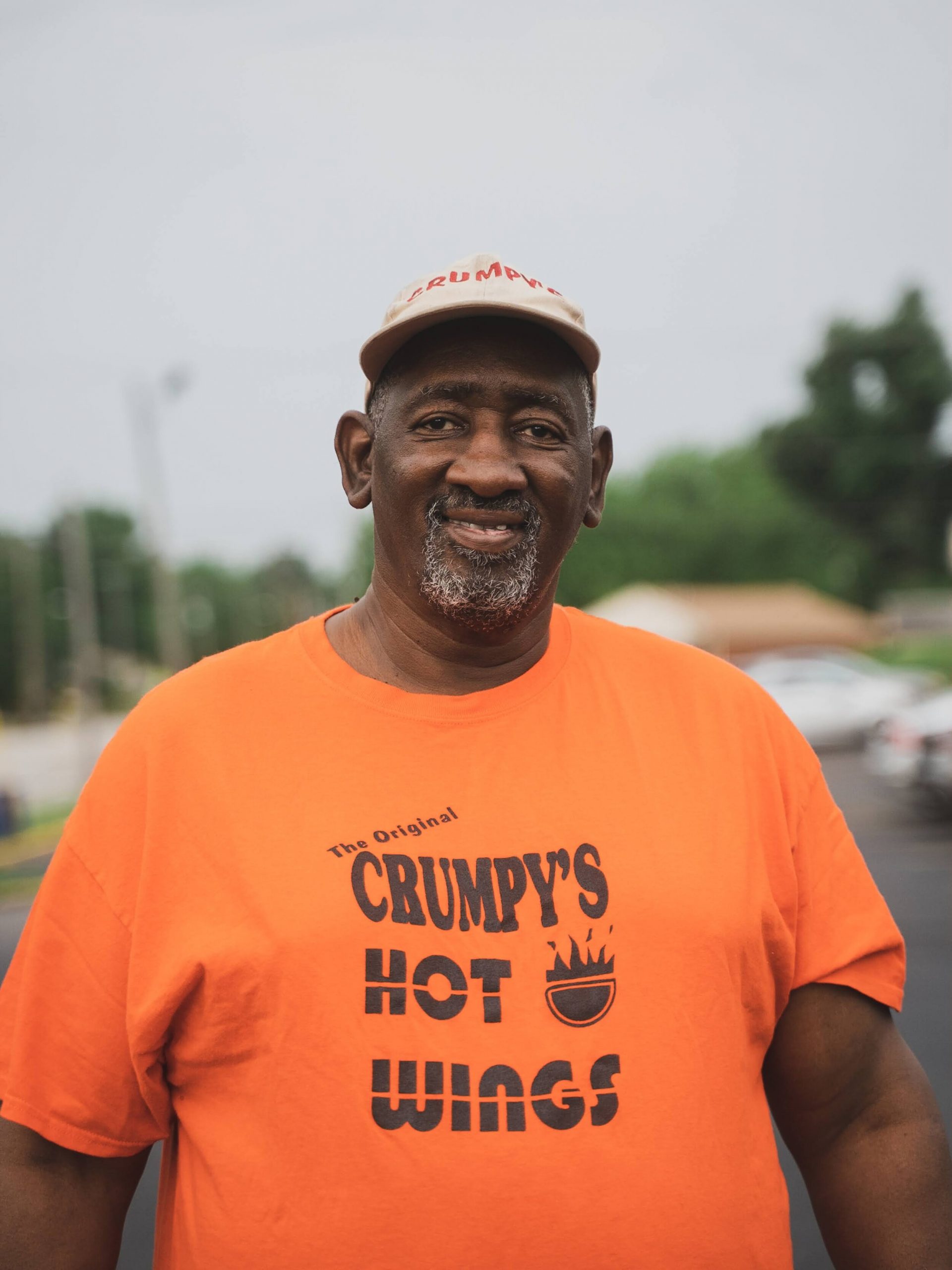 Don’t let “full-time” fool you, though. He also worked as a chef and kitchen manager at Alfred’s on Beale from 1985 to 1991. After teaching all day, he would cook at Alfred’s at night.

“Alfred’s is where I came up with these wings.”

Monday nights were known as Black Mondays, when Black people could eat for half price. “I had to work all those nights because I was the only Black kitchen manager,” he said.

“Back in school, when we had teachers’ meetings and the kids weren’t at school, they would excuse me from the meeting and let me go down in the cafeteria and fix wings for the teachers’ lunch. Mr. Holland, the shop teacher, told me, ‘We love you around here, but you better not come back here. You need to open a restaurant.’”

That summer when school was out, Donald found a space at 1584 East Alcy Road, off of Elvis Presley Boulevard. Crumpy’s Home Cooking opened in September 1991. The menu featured turkey and dressing and meatloaf, in addition to wings, and everything was made fresh. “No can nowhere,” says Donald.

People weren’t coming for the wings, though. At least not at first.

“The first couple, three weeks, we threw away two cases of wings because they wasn’t selling,” he says. “Everyone wanted turkey, meatloaf, country fried steak. So we started frying the wings up and giving them away as appetizers. Then everyone said, ‘Man, where did these come from?’ And it just took off from there.”

Donald says it’s hard to find two people who cook vegetables and cornbread alike, but it’s not the same for wings—he could teach people how to make his wings the way he did. So he soon started opening up wing shops around town. The first one was on Barron Avenue in 1992. “The school secretary at Vance had a restaurant with her husband, and gave it to me for $500 a month,” he said. “That was the first Crumpy’s Hot Wings.” 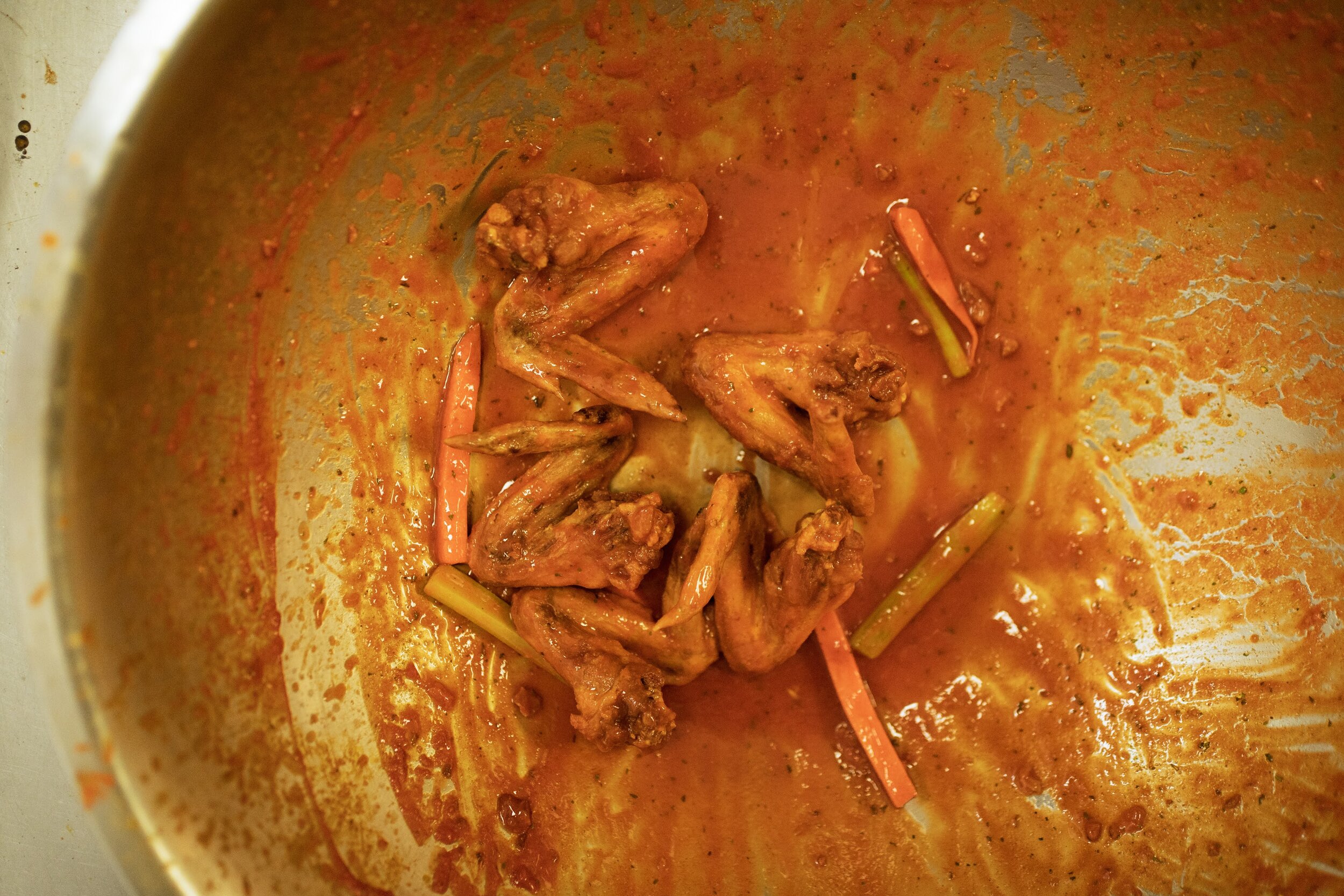 The second Crumpy’s Hot Wings opened on Brooks Road in 1993. “Walter Welch [a restaurateur who knew Donald] bought a restaurant for his daughter and her husband. After six months, they were fighting like cats and dogs and got divorced. Welch had a three-year lease at $1000 a month, so he called me and said, ‘You can have it. Everything. Just take it over,’” says Donald.

In the early ’90s, there weren’t a lot of wing places like there are now. Donald’s recipe has definitely stood the test of time.

“Everybody tried to come up with a sauce. I came up with a seasoning. When you taste these wings, you’ve got to tell somebody!” he exclaims. His flavors include seasoned, lemon pepper, honey gold, honey hot, regular hot, hot, x-hot, and suicide. He says honey gold started gaining popularity about 10 years after he opened.

“I believe in keeping it simple. I don’t want to do no garlic parmesan wings.” 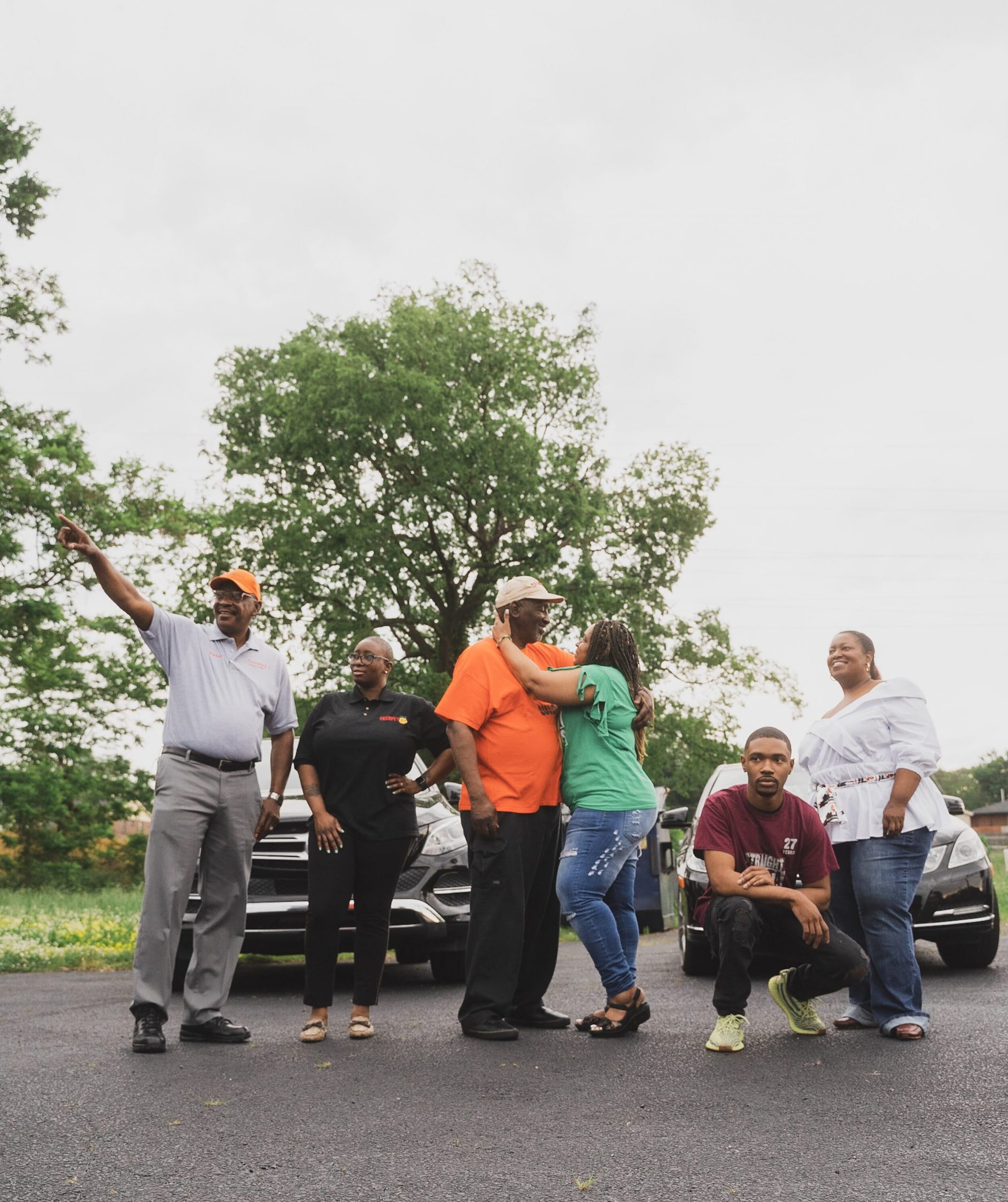 Earlier this year, in April, Donald retired from the Memphis Police Department reserves after 23 years of service. “My goal was always to be a police officer,” he said. “I tried to give up cooking, but I failed in the Police Academy three times—but the last time they made a mistake.”

Here’s how it happened. In 1998, Donald had five restaurants and was a regular speaker at the D.A.R.E. (Drug Abuse Resistance Education) school programs. He knew all of the police officers. “The chiefs came to my restaurant one day and scared the hell out of me!” he says. “Director Walter Winfrey and Chief Bobby Todd asked me, ‘Have you ever thought about becoming a police officer?’ I told him that I tried three times. They told me, ‘Whenever you decide to join, just let us know.’”

So Donald joined the reserve program, which required two shifts a month. “I did speaking, Citizens Academy, 5K walks—no car chases,” he says.

“I was trying to give up one [career] for the other one and didn’t realize I could have both.”

Now, though, for both of his careers, he is ready to officially pass the wing, er, torch.

Today, there are 11 Crumpy’s. (Donald owns the stores on Madison and Highland; the others are franchises.) To franchise is simple. “Pay a fee. I design the kitchen and train the staff. I need four weeks of training,” says Donald. “No need investing if you don’t know what you are doing.”

More than a dozen chicken wing restaurants (past and present) in the Memphis area were started by people who worked for Donald and then went on to found their own businesses. “I have some sort of affiliation to Old School Hot Wings, Combo’s Hot Wings, Magic Wings, All Star Hot Wings, Rayford’s All-n-1 Hot Wings, Conley’s Hot Wings and the Chicken Coop, to name a few,” he says.

Donald also owns the Don Don’s Hot Wings franchise, of which there are four. “Don Don is my son, Donavan. When he was little, he said, ‘Dad, when I grow up, I want to be just like you.’ So I told him I’d start naming the restaurants after him. They’re the same as Crumpy’s, but with a different name,” he explains. 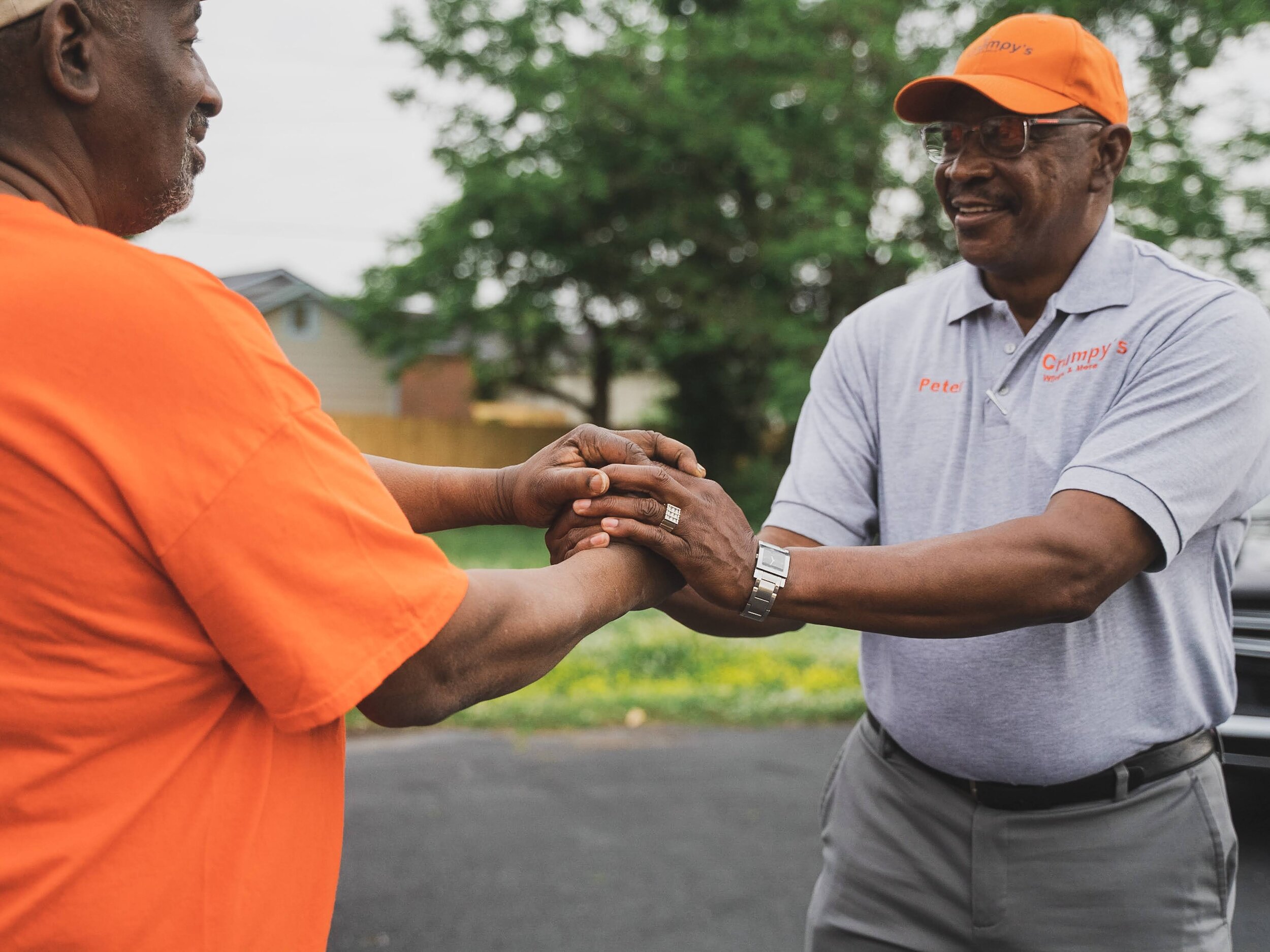 Donavan is 26 years old now and runs the Crumpy’s on Highland.

Daughter Freda Crump opened two Miss Crumpy’s in Atlanta in 2011, but closed them when she moved back to Memphis in 2020. Now she owns Miss Crumpy’s Food Truck (@misscrumpys). “Restaurant life takes your life, your soul,” she says, laughing. “I like having a food truck now. Growing up, you don’t realize what it takes until you do it yourself.”

Daughter Tammy Crump-Burnside started in 2019 with a food truck—Crumpy’s On the Go—in Senatobia, Mississippi. But the truck’s capabilities weren’t enough to meet her customer demand. So now she runs a restaurant, Crumpy’s on 51. “I love it,” she says. “I do miss the food truck, because there was no overhead, but the truck only served lunch and we quickly outgrew it. The city of Senatobia didn’t have anywhere good to eat.”

Donald’s children aren’t the only family members in the business. His brother, Jerome Franklin, owns 615 Crumpy’s in Nashville. His uncle, Hayward “Peter” Brown, has owned the Crumpy’s location on Millbranch for 22 years.

“I try to help them all. Practically everything I got was given to me, so it’s hard for me to turn around and be selfish and not help others,” Donald says.

(He is anything but selfish. If you see any of the family members listed above driving around town, chances are they’re in the Mercedes that Donald bought each one of them.) 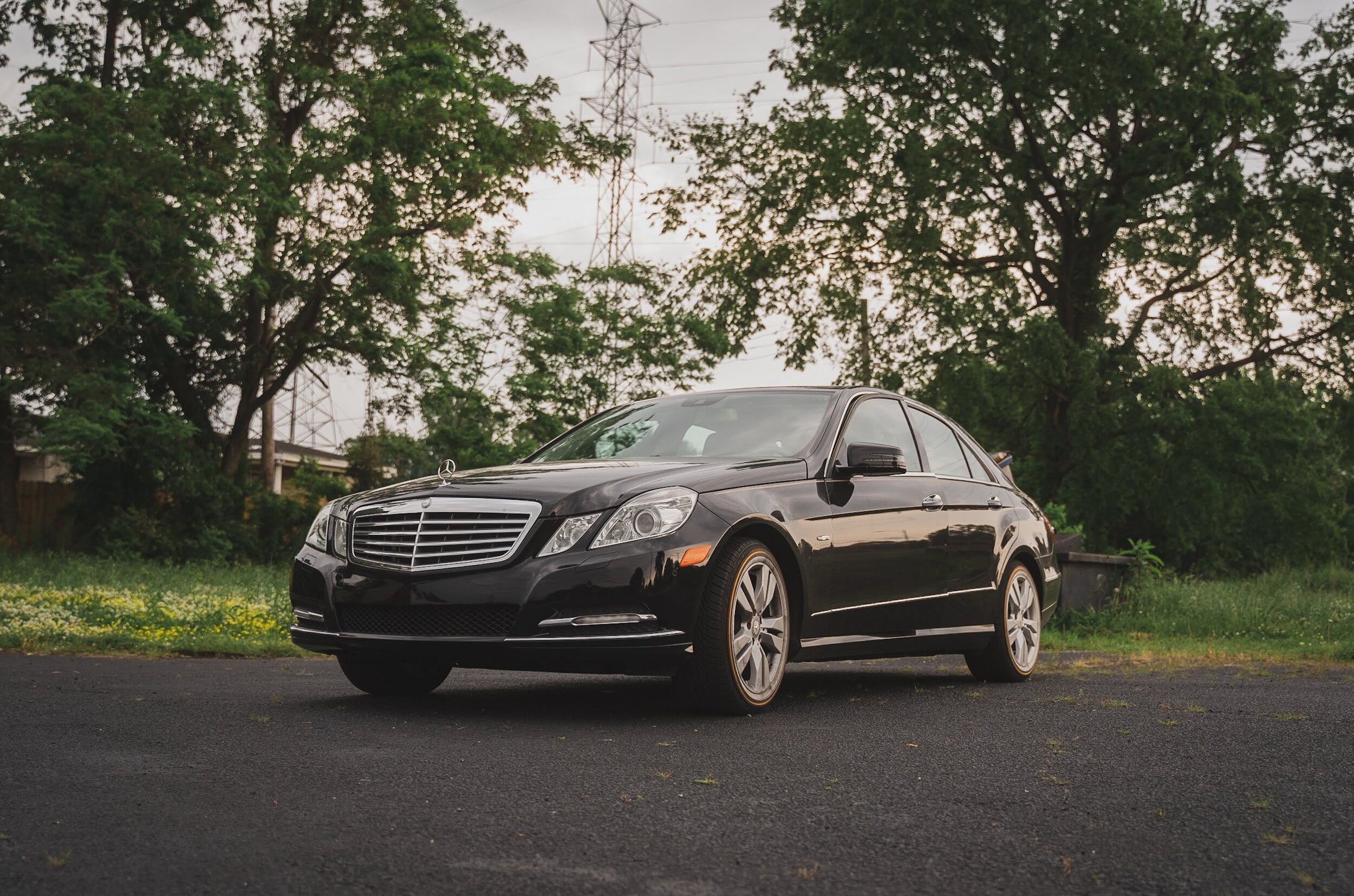 A man with this much ambition surely has a different view of retirement than most. Although he says, “Daddy fidna sit down,” what he really means is that he’s turning over local operations to his son and focusing on bigger, uh, chickens to fry. He’s sending out franchise packets in hopes of opening Crumpy’s across the country, and maybe even the world. “I’m just waiting on the phone calls,” he says.

As Donald looks toward (his version of) retirement, knowing his kids are carrying on the family business makes it easier.

“Three kids following in my footsteps. What more could a dad want?” Donald asks.

The Memphis Hot Wing Trail leads you through more than a dozen locally owned wing spots in the Mid-South, taste tested and chosen by I Love Memphis blog readers and local wing lovers. From lemon pepper to suicide hot to honey gold, these wings showcase why Memphis is the hot wing capitol of the South! Start the trail at ilovememphisblog.com/hotwingtrail.