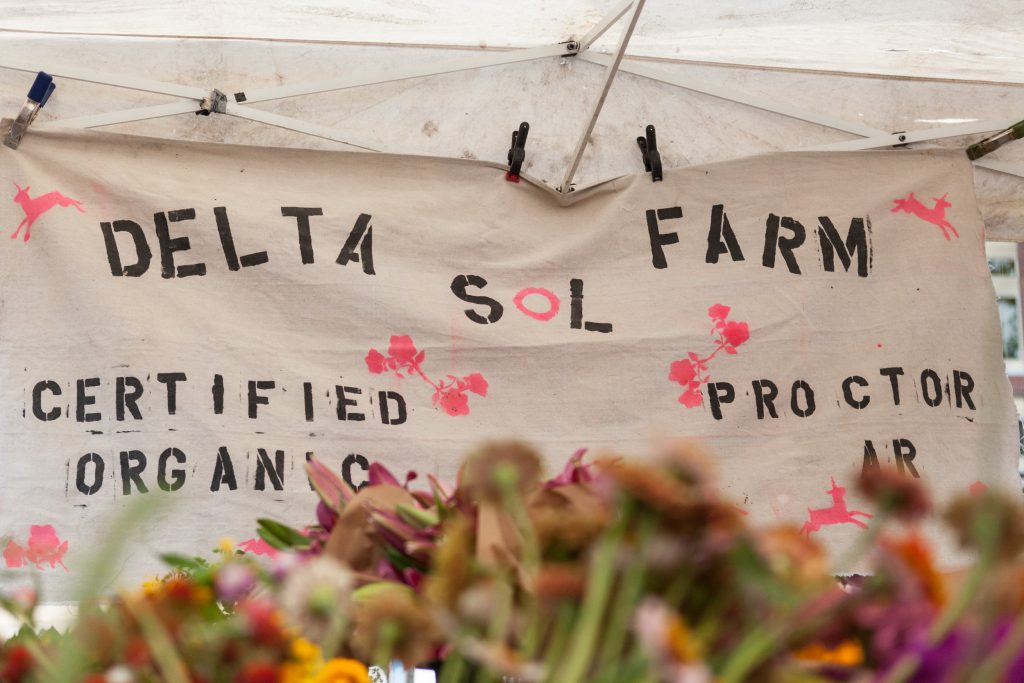 says Brandon Pugh, owner of Delta Sol Farm. On a hot August morning, he arranges summer annuals into a bouquet.

“Start with the greenery,” he says. The greenery—basil—sits in a corner bucket. Pugh approaches this container first. He pulls out a few stalks, and then scans the farm table. Before us sit several buckets, brimming with flowers.

Slowly, Pugh makes his way around the table and pulls from each of the buckets: sunflower, celosia and a final flourish of tuberose. “Triangulate,” he instructs. The bouquet takes a pyramid shape. He finishes on an odd number of flowers—he likes to stick with either three or five. By the time Pugh has finished, he holds a bouquet of gorgeous summer annuals.

To show me the source of these blooms, Pugh walks to the Delta Sol fields only a few yards away. Some rows have greenery, including lemon basil, cinnamon basil and equisetum. Summer annuals—zinnias, marigolds and celosia—make up the rest. He plans to put down snapdragons in the fall.

Pugh notes that the blooms connect us to our memories.

“People often associate celosia with their grandmothers,” he says.

He pauses, and thinks a moment. “Tuberose reminds me of church ladies,” he says.

Pugh says that customers order flowers much like they order ice cream: “They like to see the blooms prepared, and wrapped up in a paper cone.”

Through Butch Flowers—the official umbrella for Delta Sol’s flowers—Pugh is embracing the Queer Farm movement. He explains that heteronormativity and visions of buff, gruff men occupy the American farming imagination. Rural farmers are underrepresented in the LGBTQ movement, and the presence of farmers like Pugh challenges social norms of traditional farms.

Pugh is proud to be one of many U.S. farmers who dispel stereotypes about traditional masculinity and farming.

Delta Sol is located in the winding lanes of Proctor, Arkansas, but didn’t begin as a flower farm. This land yielded years of produce and livestock. It has passed through three generations of his family. Pugh earned a degree in environmental science in North Carolina and joined AmeriCorps to study the effects of pesticide exposure on migrant farmers in eastern Arkansas. Afterwards, he went off to explore farmlife in Oregon and California.

He was drawn back to the South in 2008 through the Memphis in May International Festival’s World Championship Barbecue Cooking Contest. This yearly event piqued his interest in the growing Memphis food scene and its deeply rooted traditions. His family home in the Arkansas Delta suddenly seemed like the perfect place to put all of his knowledge of and education in sustainable farms into practice. The better cost of living helped seal the deal.

By October, Brandon had returned to Proctor to plant garlic. He harvested in June 2009 and set Delta Sol officially into motion. His is the only organically certified farm in eastern Arkansas, having received the certification in their second year of farming. In addition to promoting sustainability, Pugh wishes to inform culture and acknowledges his favorite approach is through humor.

Cheeky merchandise is available through Delta Sol’s website (deltasolfarm.com). Pugh mentions his favorite shirt: a leaping unicorn with “John Queer” stamped beneath. This subtle twist on the traditional John Deere brand captures the playful approach of Delta Sol. Additionally, the store sells a “Totes Gay” tote bag and a “Butch Flowers” trucker hat. He created a 2018 Farmer John mini calendar with 12 shirtless photos of his cohort working on the farm.

A network of queer farmers has spread across the United States, aided by social media and events. Pugh says visibility creates support. His farm’s events—including Queer Dinneer, Outstanding in the Field, and Farm is Art—have promoted Delta Sol’s social and sustainable mission.

At the Queer Dinneer, Pugh and two amateur musicians paired up for some musical entertainment; they dubbed themselves the Dixie Dicks. The group was a hit, and they continue to grow in popularity. The Dixie Dicks have performed locally at Wiseacre Brewing Co., Bar DKDC, The Cove and Railgarten. Their album, VERS, is available on Spotify.

Pugh smiles. “The resistance is showing up and having fun,” he says.

Sarah Hagaman is a native Tennessean who frequents the Memphis food scene. She has written for various publications, including Edible Nashville, The Oxford Student at England’s Oxford University and the Daily Beacon at the University of Tennessee, Knoxville. Contact Sarah at hagamansarah@gmail.com.

At the Family Table