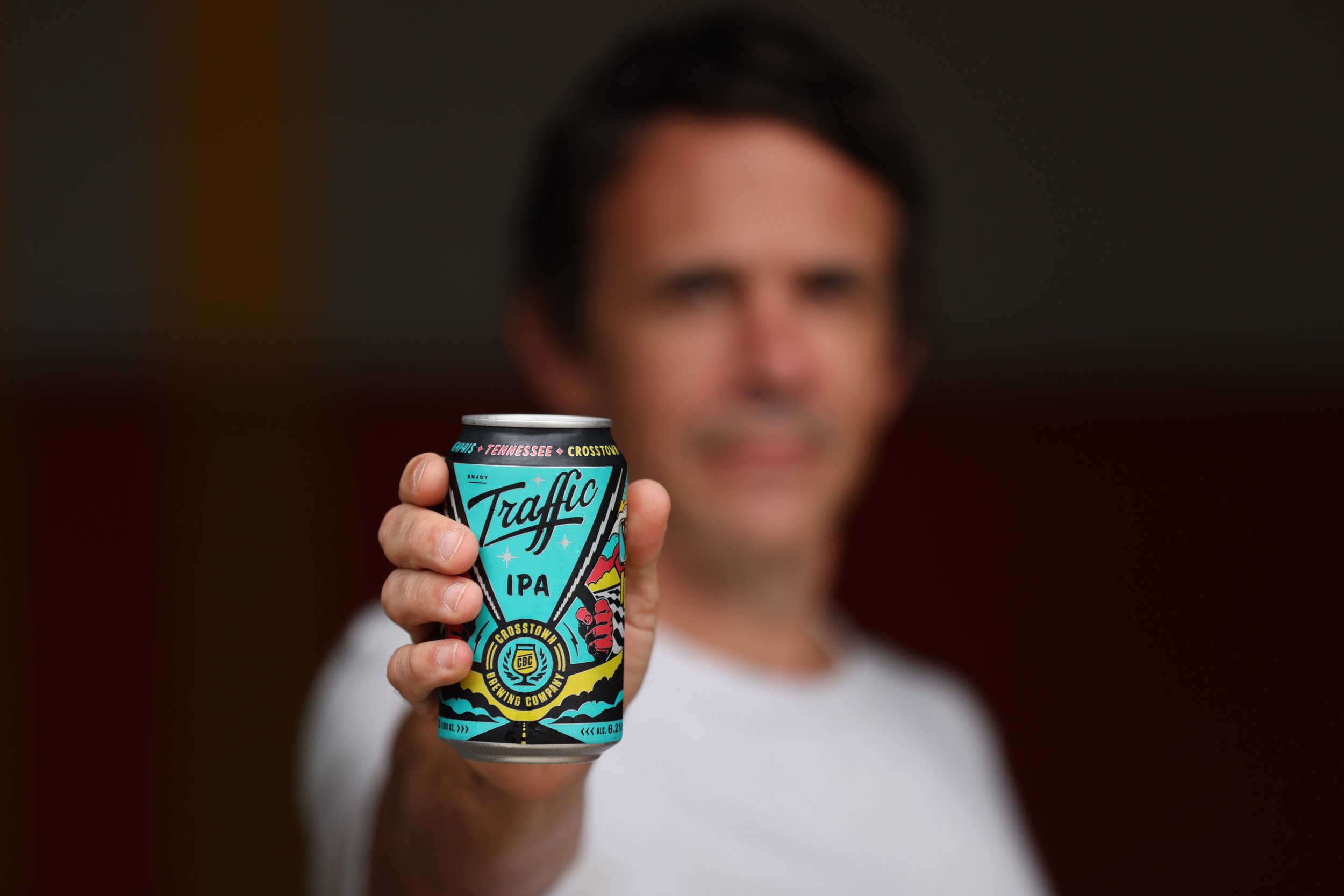 In an entire magazine dedicated to beer, it’s time to press pause on the craft of beer and instead hear from another brand of Memphis maker: the beer can and brewery artists.

It’s not only what’s in the cans that counts. The artwork that covers beer cans, brewery walls, and our fridge shelves reminds us of the unique story that only Memphians can tell.

Many brilliant Memphis artists have shown up on local beer cans over the years. We tracked down three of our faves to get to know them better and find out what it’s like to craft the visuals of some of Memphis’s best beer.

Whether or not they realize it, most local beer drinkers are intimately familiar with Rachel Briggs’s work. She is the visionary behind most of Wiseacre Brewing Company’s visual identity and is a prolific artist in and out of the brewery. After starting as a designer and then art director of American Songwriter magazine, she has dipped her toes into the publishing and music industries, as well as collegiate illustration education. She’s also immersed in illustrating a graphic novel that will be out late 2022.

Known primarily as a muralist, Quantavious Worship (aka Toonky Berry) is becoming prolific in the beer industry, thanks to his ongoing work with Beale Street Brewing Company. He moved to Memphis to attend Memphis College of Art and has works of art splashed across buildings around town. He works full-time as a freelance artist who creates paintings, portraits, design, and illustrations, as well as beer cans and murals. Ghost River Brewing Company’s Grind-N-Shine was his first beer can. Since then, he’s designed three labels for Beale Street Brewing Company—All-Day Errrday, 528hz of Love & Hoppiness, and Love Rollercoaster (collab with Alematic Artisan Ales and 2nd Shift Brewing for the Barrel & Flow Virtual Fest), as well as Situation-Sip (a collab between Boomtown Brewery and Beers A GoGo).

Born and raised in Memphis, Tom Martin has continued to live and work here, creating art and designs for many local businesses, including Crosstown Brewing Company. He especially enjoys working illustrative elements into design and advertising for his clients. He’s just about as Memphis as you can get. For almost 20 years, he worked with Elvis Presley Enterprises, and he recently designed the wall graphics for WYXR in Crosstown Concourse.

One thing is clear: Memphis beer wouldn’t be the same without these artists who work to make our city a more beautiful and interesting place.

Rachel believes that Memphis is a mystical town. “I have found that art in this city is such a positive force. I garner major inspiration from Memphis-based visual artists and designers I have met or connected with through the UrbanArt Commission and Crosstown Arts, and also by following collectives like Tone, [Memphis] Current, Creative Works, and more,” she says.

“A lot of the art in Memphis is very community driven. There’s an element of grassroots support and edification that I think is very unique to this city. There is magic when artists and local fabricators work together for installations and projects.”

Toonky says it’s hard not to make art in Memphis when there is so much to be inspired by. “Plus, Memphis is filled with amazing creatives,” he says. “So much greatness comes from Memphis!”

Tom says the work that really inspires him and makes him want to take out his phone to take a picture is either conceptually compelling or simply beautiful, or both. “I could say that I naturally gravitate towards more graphic styles, like the art I grew up seeing on the side of arcade games or comic books,” he says. “But, really, I am a sucker for any style or execution that pushes boundaries and goes beyond the surface of a first glance.”

Regarding beer label design, he says craft breweries really opened the door to where we are today, with beer cans being a canvas for illustration and design.

“We expect compelling art on our beer cans, and that quality has become a very important component to selling beer,” he says, noting that, locally, Wiseacre has done a great job of creating compelling art in a very consistent style.

Toonky is learning that there ’s no limit to what inspires him. “I’m inspired by cartoons from back in the day, architecture, anime and more,” he says. “I’m also inspired by experiences like things I see on the regular, my past, people, and events.”

When it comes to the inspiration for the beer cans specifically, he says it depends on the theme, the color and taste of the beer, and how the brewers feel about their creation. “I try to express that feeling with the design,” he says.

Rachel says that, globally, beverage labels have increasingly become a whole working universe for illustrators and designers over the past decade or so, especially in the craft beer industry. “There’s so much I love about working with Wiseacre,” she says.

“I try to approach the art for each brew as if there’s a little world needing to be conjured and brought to life, while making sure the label feels rooted and connected to the vibe and family tree of Wiseacre.

The technical challenges that come with the limits of how art can be printed on aluminum cans (how many colors can be used, the limit of space, etc.) is a practice in constraint. Being able to stretch the imagination and push the physical limit on how the story and art can exist on a can or bottle label is a journey each time.”

Tom sees beer cans as blank canvases for artists and designers to flex their muscles and get creative. “When I was studying graphic design in college, in the ’90s, illustration was discouraged because it wasn’t a feasible pursuit,” he says. “There just wasn’t a huge demand for illustration except in editorial and publications. I pursued graphic design instead of illustration, but I always incorporated illustration work whenever possible. Now, with beer labels and all the merchandise that comes along with each beer, the line between illustration and design has become very gray, and I love that fact!” 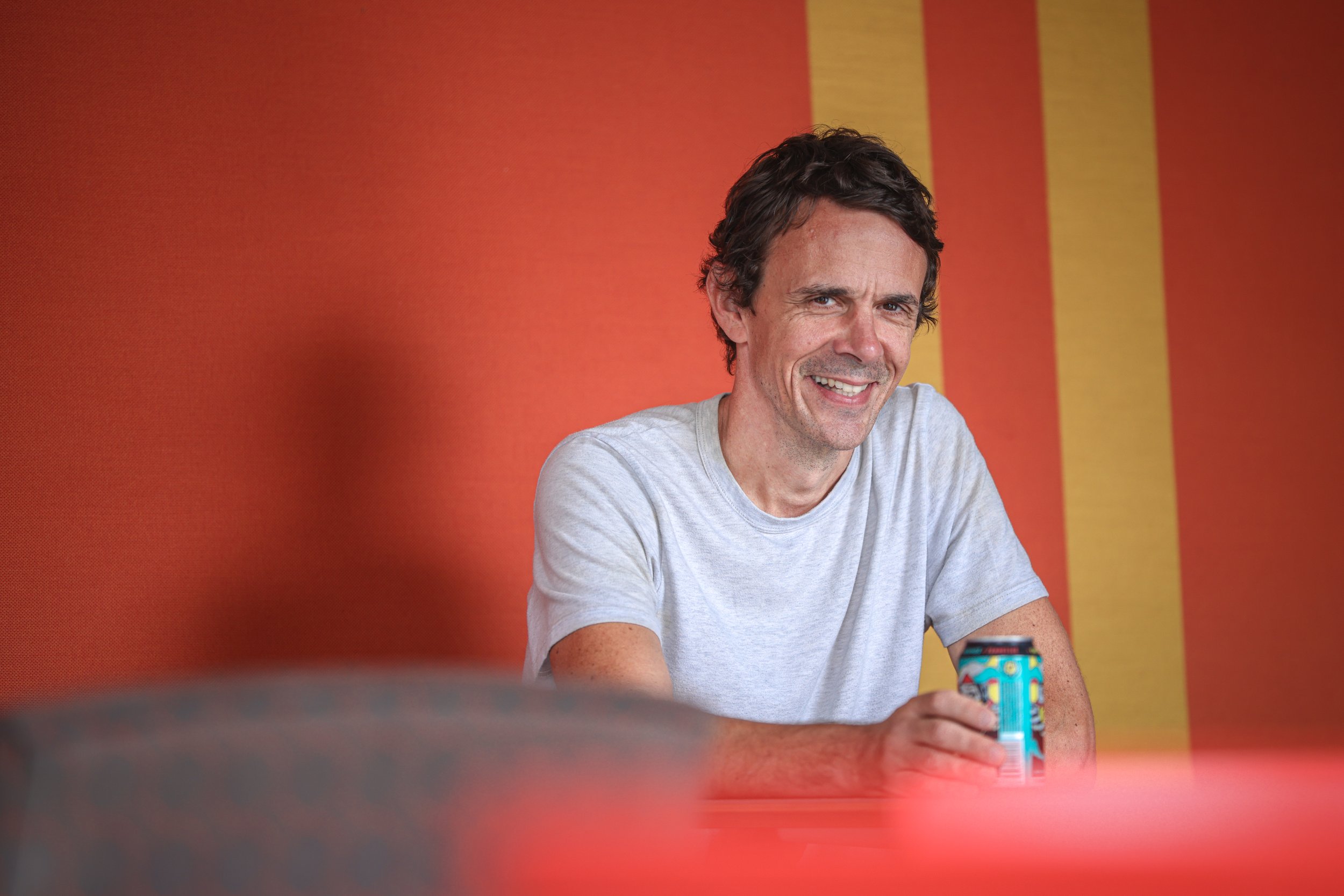 About the disposable nature of the can art, Toonky says cans are like murals—both are temporary.

“Any of my murals could be painted over, just like the cans are going to be thrown away,” he says.

“I personally keep at least a six-pack for my shelf because some of the beers are limited editions and breweries change out the beers seasonally.”

Rachel says, “I hope people just enjoy the Wiseacre experience. Maybe they’ll find themselves looking at the details in the art, discovering the little nuances and Easter eggs I often hide in the illustrations. But, yes, nothing gold can stay; moments are fleeting! If the art has been a part of a momentary experience, then I feel like it’s ultimately served its purpose. Hopefully in that moment that they’re enjoying the beer, they’re also enjoying the aesthetics of the can art before it heads to the recycling bin.”

Tom takes this acceptance a step further. “It is a great feeling seeing a shelf filled with six or seven different beers that I have designed for Crosstown,” he says.

“Seeing the pristine cans all neatly lined up together is pretty thrilling, but there is also something oddly satisfying about seeing a smashed up Traffic can on the side of the road.

I mean, I hate litter, but can’t deny that I get a small thrill when that happens.”

Jordan Arellano is a writer, dog mom, and Memphis transplant who has called the 901 home for the last five years. Her background is in nonprofit and social media, and she now works in marketing. When she isn’t reading, writing, or pandemic stress-baking, she travels as often as possible and eats all the vegetarian fare Memphis has to offer. @are.jordan

Jamie Harmon is a photographer living and working in Memphis. He goes on scavenger hunts without a list and is the creator of Amurica photo. uberphoto.com @amuricaworld

An Oasis on Beale