0 0
What’s bringing everyone to Chattanooga? 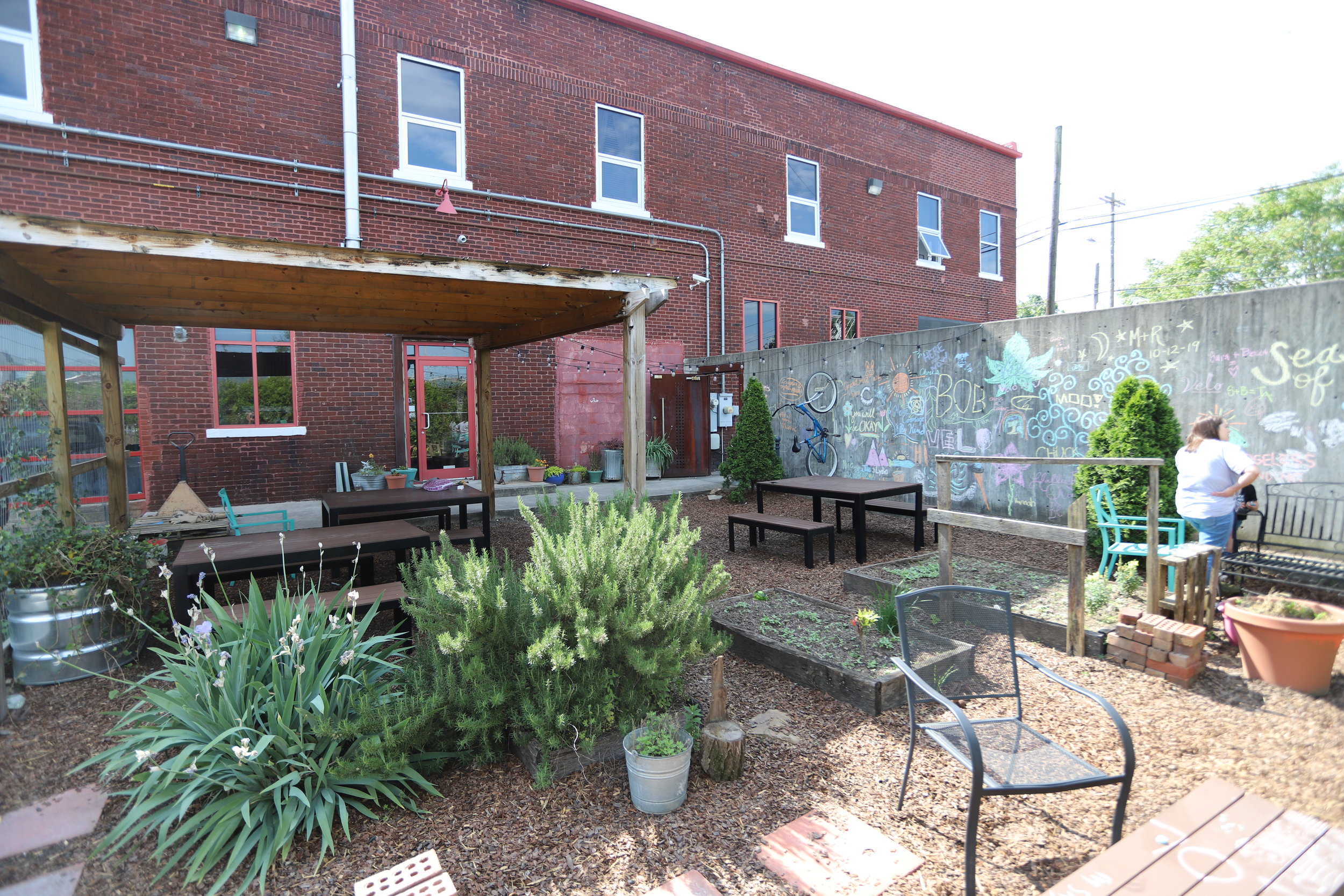 I went on a couple of family trips to Chattanooga when my boys were small. We did the Tennessee Aquarium, the Creative Discovery Museum, Rock City, Ruby Falls and Aretha Frankensteins pancakes. A decade (or more) passed and I filed Chattanooga under “Places to Go with Kids.” So when Richard, my favorite road therapy companion, suggested we go to Chattanooga, I was a little “eh.” But after a couple of text messages from Richard with links to a cool looking third wave coffee shop and a bowling alley with a mural of “The Dude,” my interest was piqued. I shuffled through my Airbnb app, and just like that we had a place booked for the weekend.

[Other fun lodging options include the The Dwell Hotel (no kids under 17), The Crash Pad (hostel-style quarters geared towards outdoorsy types) and Bode (Airbnb meets hotel).]

Chattanooga is about a five-hour drive (339 miles) from Memphis, and you can go either by way of Nashville or through Mississippi and Alabama. 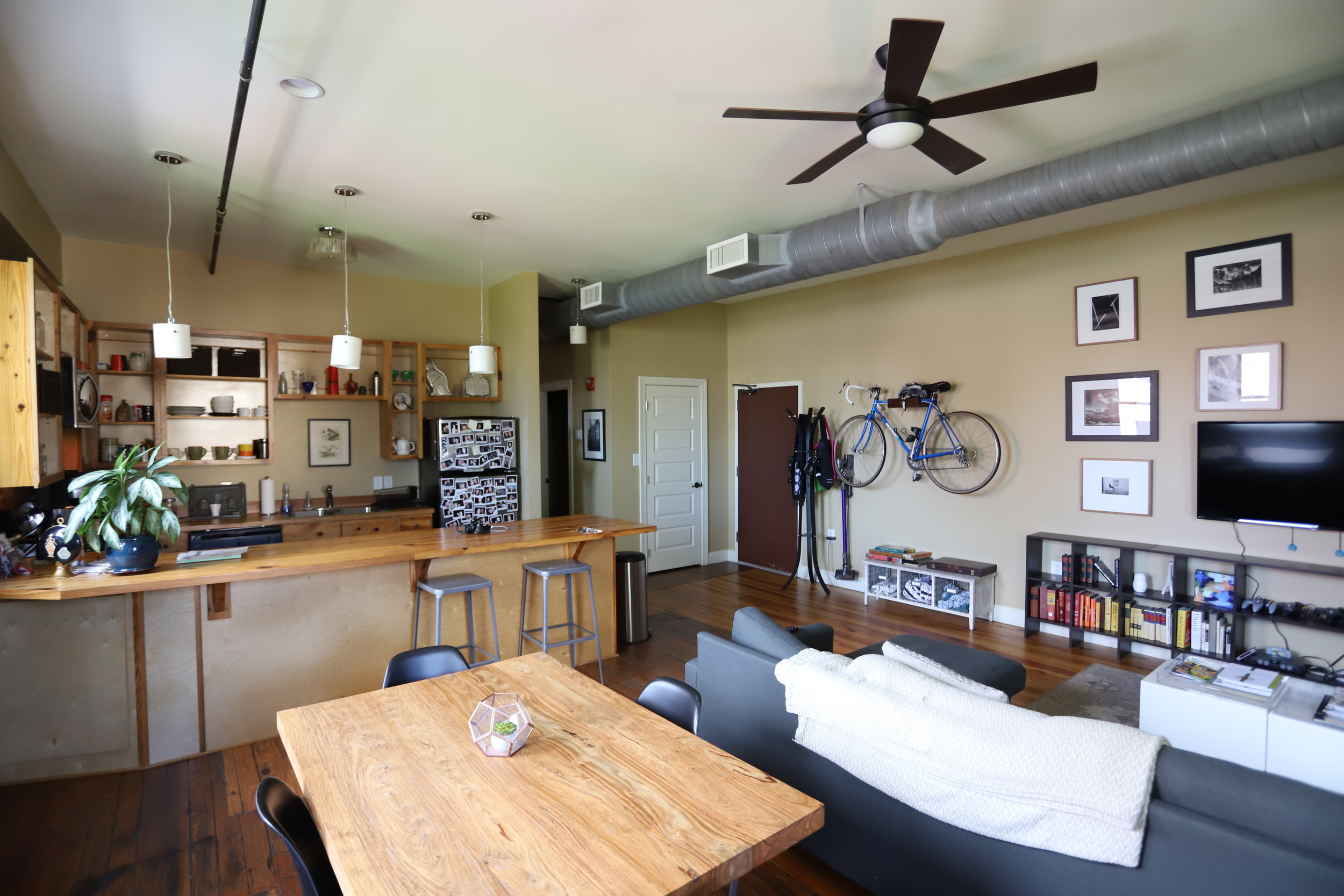 Turns out our Airbnb was right smack in the middle of Southside, which is one of Chattanooga’s fastest-growing neighborhoods. (Read: It’s being rapidly gentrified.) Speaking of, a story in Chattanooga’s Times Free Press last year said that the city was growing faster by percentage than any other city in Tennessee—including Nashville. At 7 p.m. on a Friday night, there were people everywhere—lined up outside the hipster Taqueria next door, filling the patio of the Railgarten-like place across the street, and rushing into the event space on the other side of the building where we were staying.

People were walking and biking, live music filled the air, and it was, well, I’m pretty sure it was “lit.”

What’s bringing everyone to Chattanooga? I have a couple of theories: The official nickname for Chattanooga is “Scenic City,” which is reinforced by the city’s reputation for having excellent outdoor activities—in the mountains, on the river and so on. Chattanooga is also home to the country’s first and largest gigabit-per-second, community-wide Internet network. “Gig City” is replacing “Scenic City” as its nickname, thanks to Internet speeds of up to 10 gigabits per second supplied by the publicly owned Electric Power Board.

All this is to say, there was no way to do all of the things in one weekend, but we did as many as we could!

Disclaimer: We walked everywhere, which was great as it is a very walkable city, but we never quite made it to the riverfront. We also avoided a lot of the super-crowded, trendy places. 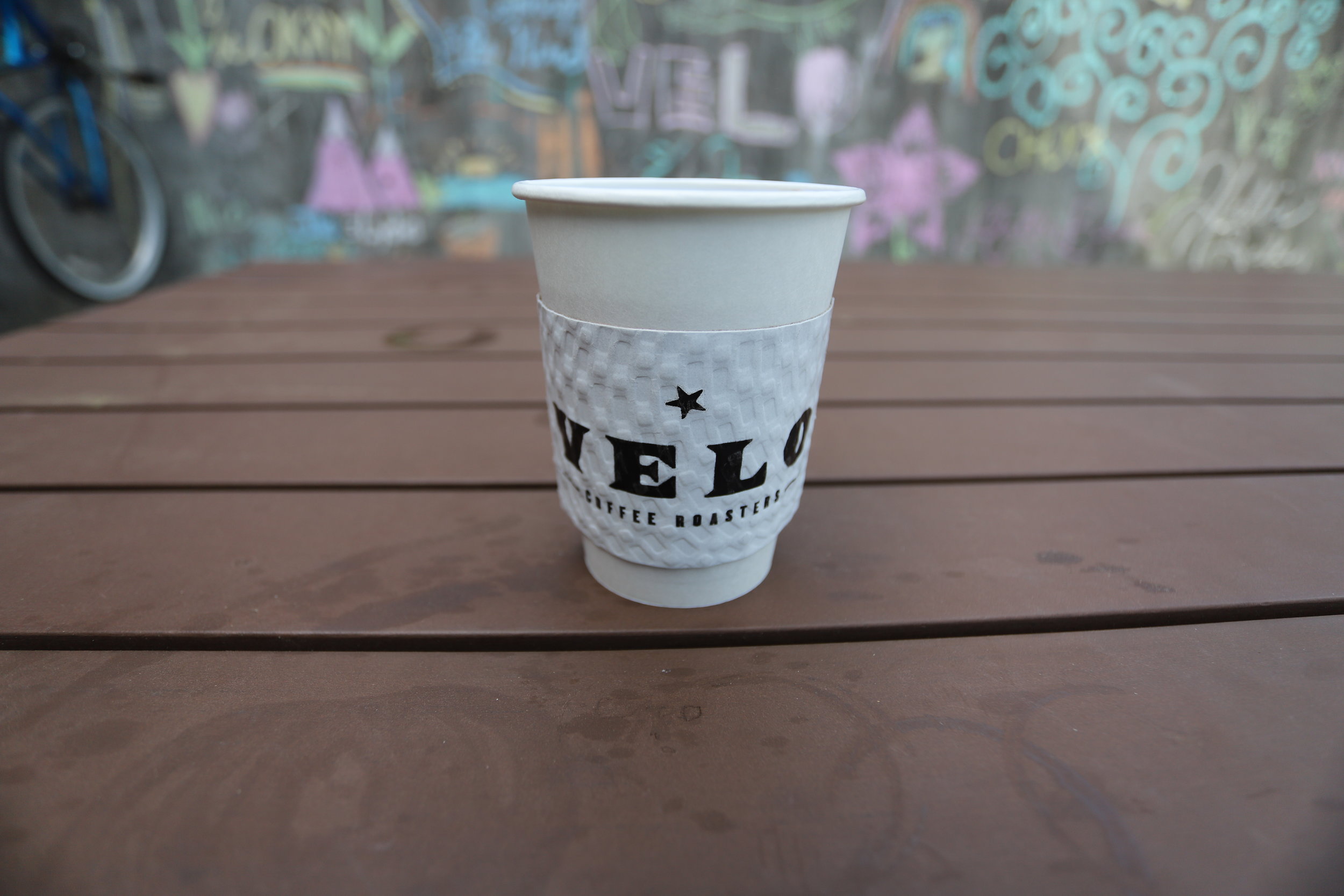 Velo Coffee Roasters is tucked behind a printing company in a large brick building on Main Street. To enter the shop, you have to walk through their really nice, low-key patio that’s the perfect spot for hanging out. They do all of their own roasting, and you can see the equipment inside. There were several coffees to choose from, so I left it up to the barista for Richard’s pour-over, noting that he is an Ethiopian fan. I prefer cold coffee, so I went with the coffee soda. They told us to have a seat and that they would bring it out. It felt weird to not go ahead and pay, but I followed their instructions! Outside there was a tattooed fellow drawing in a sketchbook and a group of “adventure” tourists who arrived on a coffee bike. (A much smaller version of the group-powered “beer bikes” we see in Memphis.)

Once properly caffeinated, I went in to pay and discovered a small cooler by the register filled with their special bottled coffees. I added a regular cold brew and a “hopped and lightly carbonated” cold brew to my order to try out later. The latter was basically the coffee of my dreams.

I regret not getting a cooler full to bring home.

Fun fact: Velo offers curated coffee subscriptions! For $28 you get two 12-ounce bags of whole beans delivered to your door. You can have them delivered every seven, 14, 21 or 28 days. 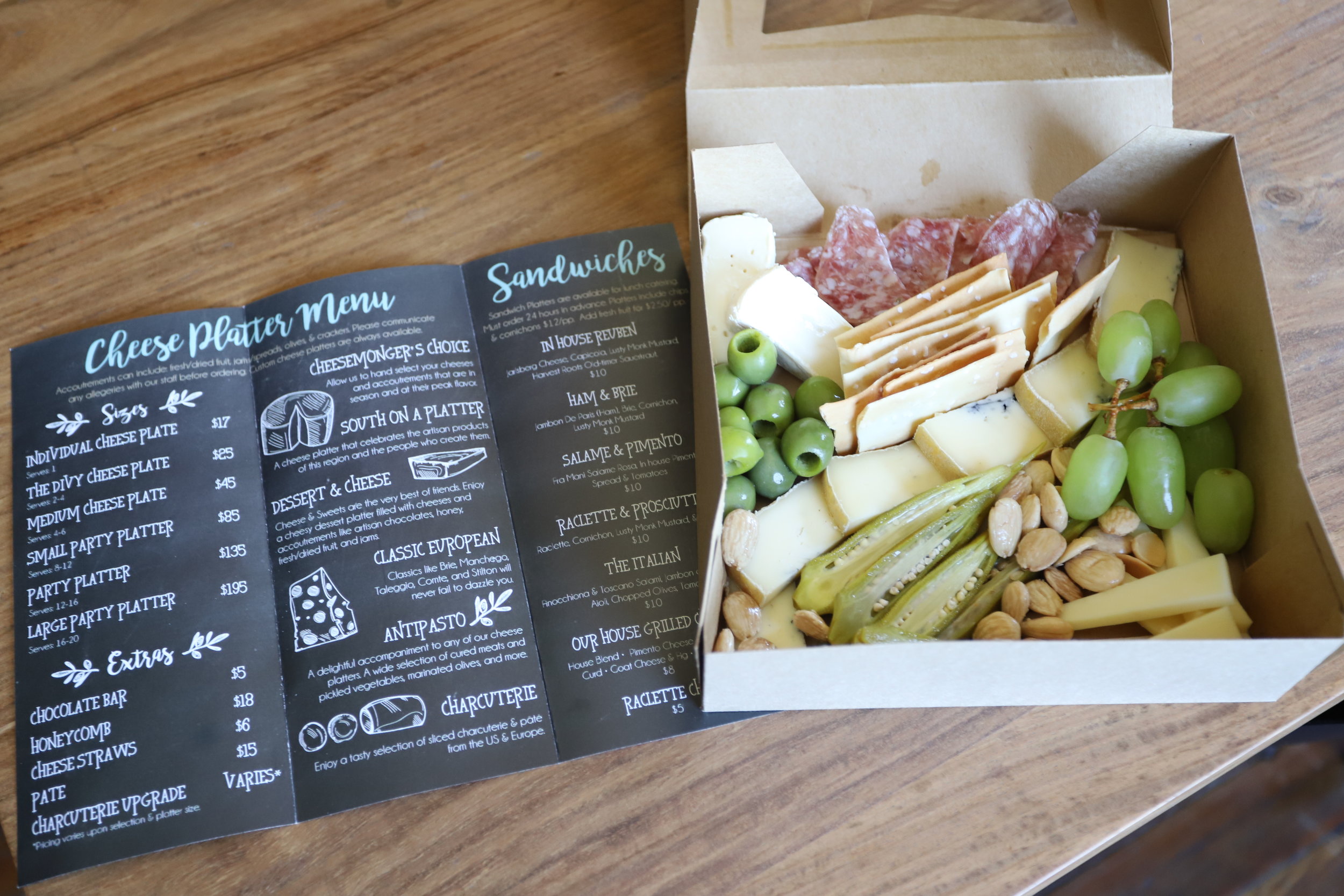 Bleu Fox Cheese Shop is just across Main Street and is the place I have mentioned to everyone I know. I love it so much. It’s my dream for Fino’s when it re-opens. The business started in 2017 but recently relocated and is all sparkly and new. There was a fun crew of dudes—Chris Babb-Cheshul, Sam Weathers and Jesse Watlington—working there who were all  knowledgeable and chatty, cracking jokes, clearly enjoying their jobs.

At the counter, you can order custom cheese boards in varying sizes or one of six sandwiches (most of which involve a Lusty Monk mustard). There’s a counter where you can sit and watch your sandwich get made, and plenty of table seating in the back room. All along the wall are (mostly) locally produced things that go well with cheese, like beer, crackers, kombucha, chocolate and whatnot. They did the hard work of finding all of the cool things produced locally and had them lined up for the taking. Case in point: Belle Chocolates, a local bean-to-bar chocolate maker who starts with cocoa beans from a single-origin farming co-op in northern Peru and uses only organic ingredients.

Back to the cheese. There are several platters to choose from: Cheesemonger’s Choice, South on a Platter, Dessert & Cheese, Classic European, Antipasto and Charcuterie. We chose the South on a Platter with three cheeses from Sequatchie Cove Creamery in Sequatchie, Tennessee (Dancing Fern, Coppinger and Cumberland). They also carry Sweetwater Valley Farm cheese from nearby Philadelphia, Tennessee. (They’ll be at the upcoming Craft Food and Wine Festival.) Bleu Fox has their habanero cheddar, Fiery Fiesta, smoked white cheddar, sharp white cheddar and Italian pesto. 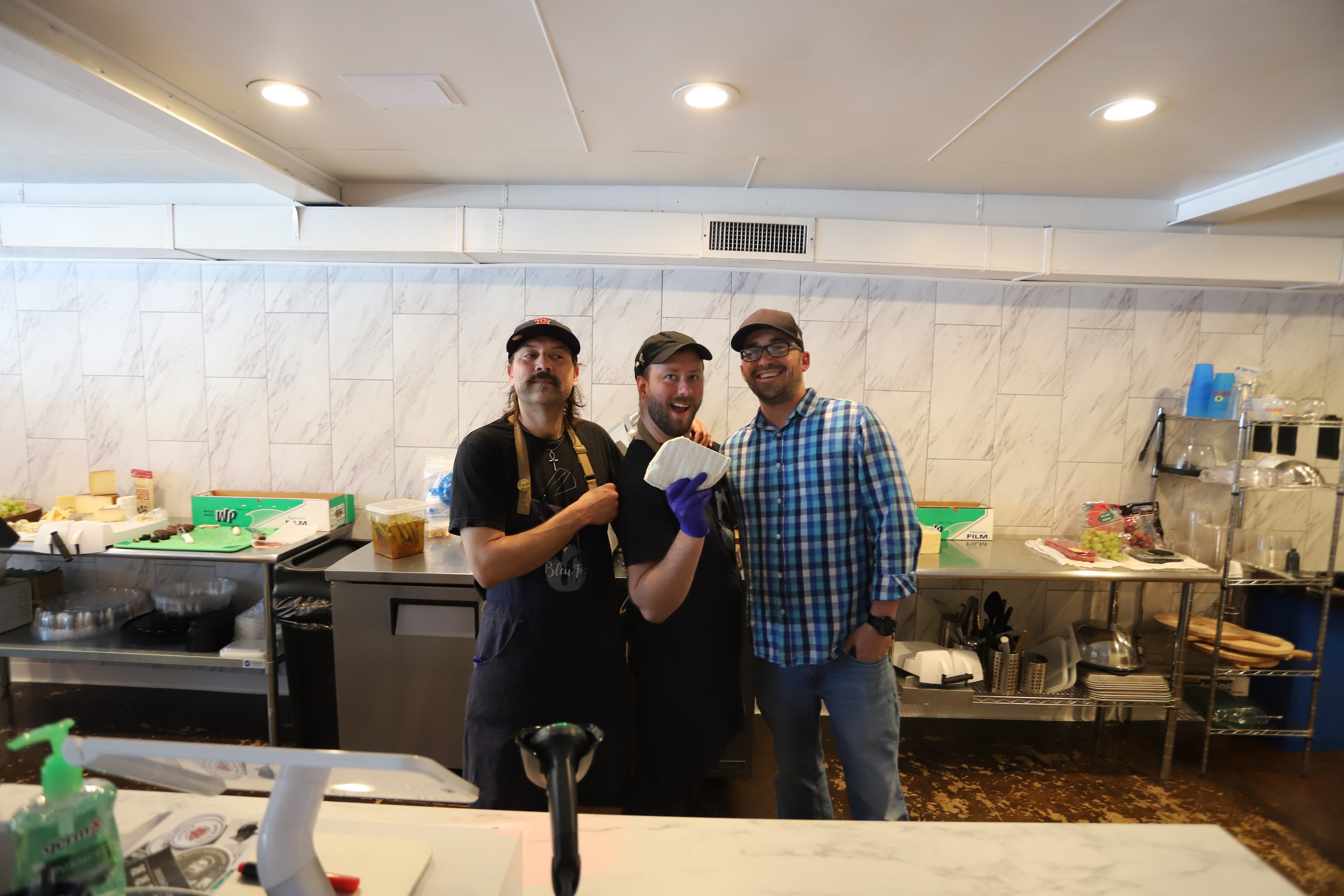 Fun Fact: Sam and Jesse both are certified cheese professionals from the American Cheese Society. This is a very elite group of 900 in the United States, and there are only 19 in Tennessee.

Hutton & Smith’s taproom is on MLK Boulevard, which was about a mile-and-a-half walk. The main area has a dive-bar vibe, which we really liked, and there’s a second room with a shuffleboard table that gives it that traditional taproom vibe. Hutton & Smith opened in 2014 and started brewing in 2015. They were the second brewery in Chattanooga, after Big River. Named for James Hutton and William Smith—the fathers of modern geology, who are rumored to have strayed from time to time to focus on their love of beer—the brewery also is passionate about geology and craft beer.

Their motto is “Gneiss Beer by People Who Give a Schist.”

With over 20 beers on tap, it was hard to choose, but we did: Vadose Zone Vanilla Stout nitro  and a crisp and drinkable Paleo Pilsner. The Kaledonidy Kveik (Norwegian farmhouse yeast) Sour Ale was a close second choice. The bartender was quite friendly and super knowledgeable. And in a city of transplants, it had a very neighborly feel. The taproom is open seven days a week; $3 pints on Wednesday.

Fun Fact: You can find Hutton & Smith in cans at Cordelia’s Market and on tap around town. 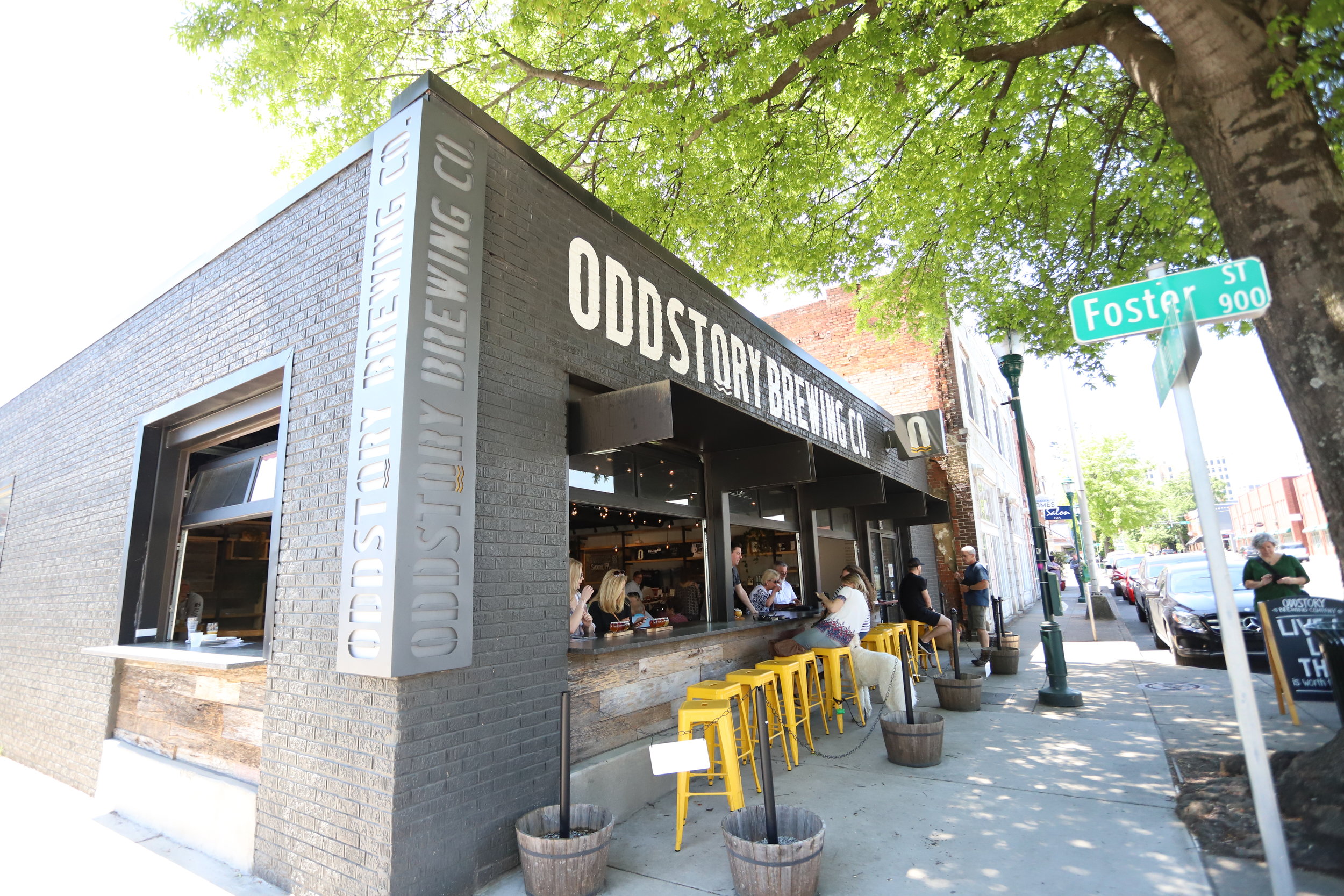 Oddstory’s brewery and taproom opened in late 2016 and are just across the street from Hutton & Smith. Oddstory feels fresh and polished like Ghost River’s taproom, but has even more of that great indoor/outdoor feel, thanks to four garage door windows. Their motto is “Live a life that is worth telling,” and people seem to happily congregate there to talk and mingle. There are 16 taps, including the four flagships: Golden Blackbird Belgian Blonde, Cloud Walker Pale Ale, Woven Stone Vienna lager, and Monkey’s Heart India Pale Ale. On the day we were there, the experimental smoothie-style IPA was bringing folks in left and right. We tried one, along with a flight of other fun beers like the Snake Root Coconut Milk Stout and a Dark Cherry Sour. It’s rare to find a taproom with a kitchen, at least in Memphis, but Oddstory has a rotating menu of small, shareable plates. We could not resist the call of the green chile chicken enchilada dip.

Fun Fact: Owner/Head Brewer Jay Boyd says his first homebrew had a vomity taste which made it undrinkable. Luckily, it inspired him to find out what he did wrong rather than throw in the towel. He attended brewing school and then completed an apprenticeship at Harpoon in Vermont before opening Oddstory. 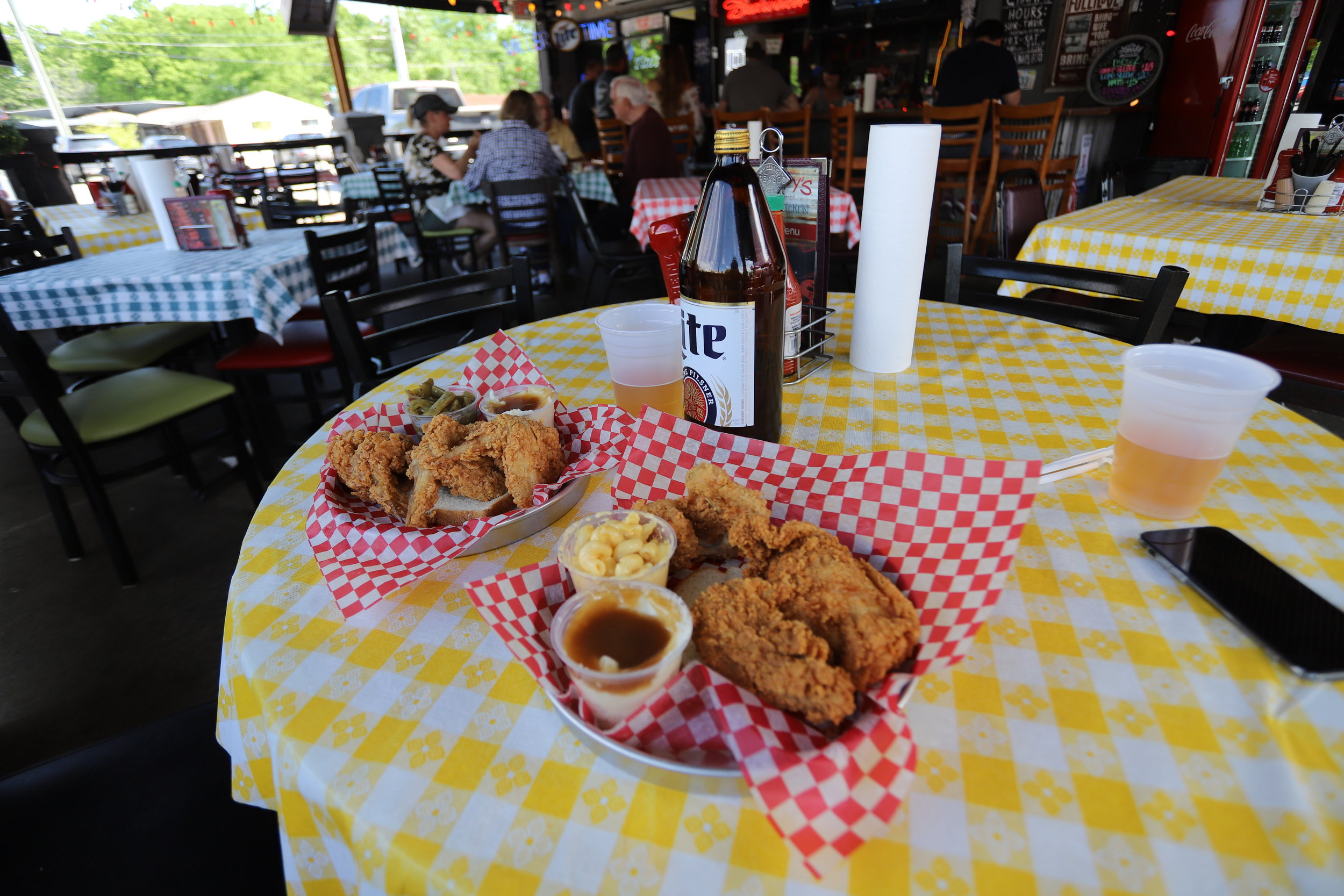 Champy’s—the original one anyway—is also on MLK, and I highly recommend stopping by to get a lil fried chicken to soak up some of that beer you drank down the road. Champy’s sells plenty of beer, in 40s no less, so this plan could backfire.

Champy’s is the perfect place to take your friends who complain that Gus’s is too spicy.

(Richard says, “If you like chicken and the Eagles, this is the bar for you.”) But seriously, there’s a great patio, friendly service, and damn fine fried chicken. Regular chicken. Not spicy. (Crawfish were also quite popular on our visit.) It’s got over-the-top decorations to make it feel like you happened upon a chicken shack in the Delta, though in reality it is sitting in the shadow of the massive—I mean massive—Douglas Heights UT Chattanooga student housing development.

Fun Fact: Free tanning is a perk of living in Douglas Heights. Also, you can catch another Champy’s on your way home to Memphis if you drive through Muscle Shoals, Alabama. 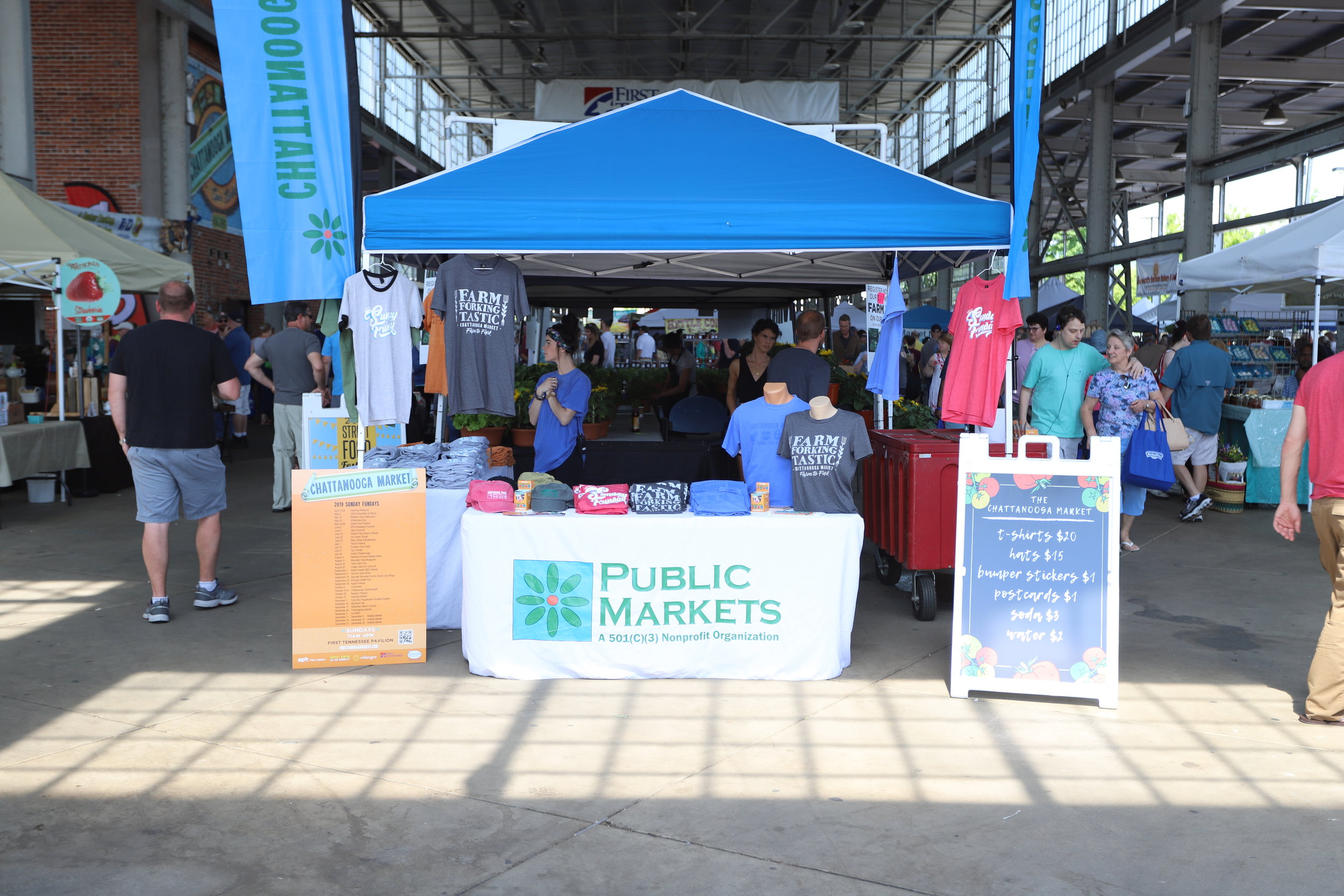 Chattanooga Market’s opening day was taking place just down the road on the Sunday we were leaving, so we popped over to check it out. It’s the region’s largest producer-only arts and crafts and farmers market, held every Sunday from April to December in the open-air First Tennessee Pavilion from 11 a.m. until 4 p.m.

It was the equivalent of having Cooper-Young Festival and the Memphis Farmers Market in one place every week!

It was more crafty than farmer-y on our visit, but we were told that changes as the season progresses. They had a German bakery with smothered pretzels, and someone was selling whole cakes; there were mushrooms, dried gluten-free pastas, pork skins, barbecue sauce, kokedama, food trucks and more. Somehow we made it out of there with just one tub of strawberry salsa packed on ice.

Fun Fact: There’s another market on Main Street on Wednesdays that is smaller and more farmer-y.

After our weekend visit, I felt like we just had the smallest taste of all that Chattanooga has to offer. And it made me want to return again soon with my boys—for a college tour.

Cooking for a Crowd