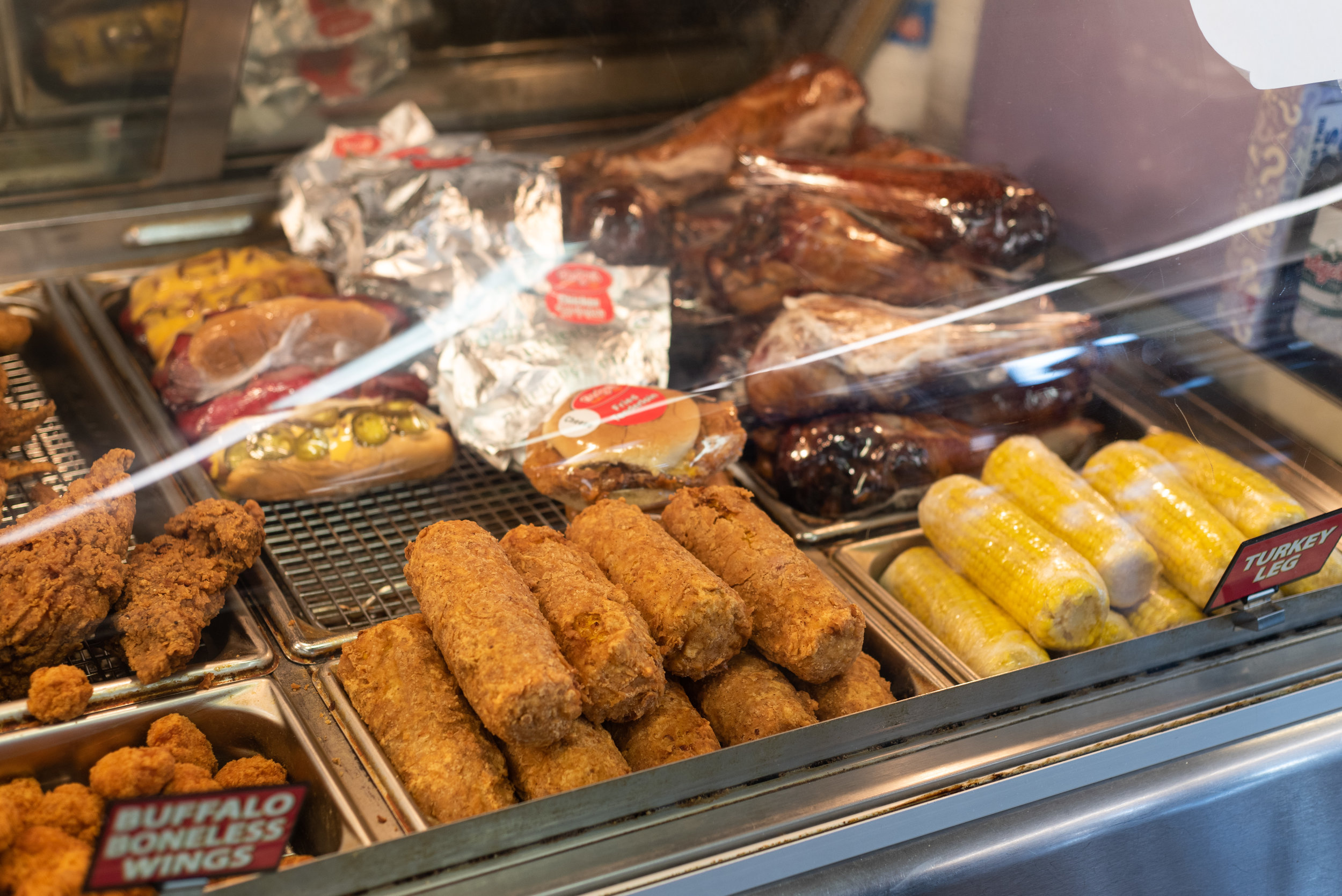 One of my earliest experiences that helped form what would become a long and varied history of gas station dining occurred 13 years ago when I missed a flight and became stranded overnight, with very little money, in Tupelo, Mississippi.

This being long before the rise of Venmo, I looked for somewhere with money-wiring services and wound up at one of those gas stations with the big check-cashing sign out front. I ended up ordering a giant fried potato wedge and a massive turkey leg while I waited on my mom to wire me some cash. It wasn’t the sort of place I imagined I’d enjoy, but it was, and I did. Enthusiastically. 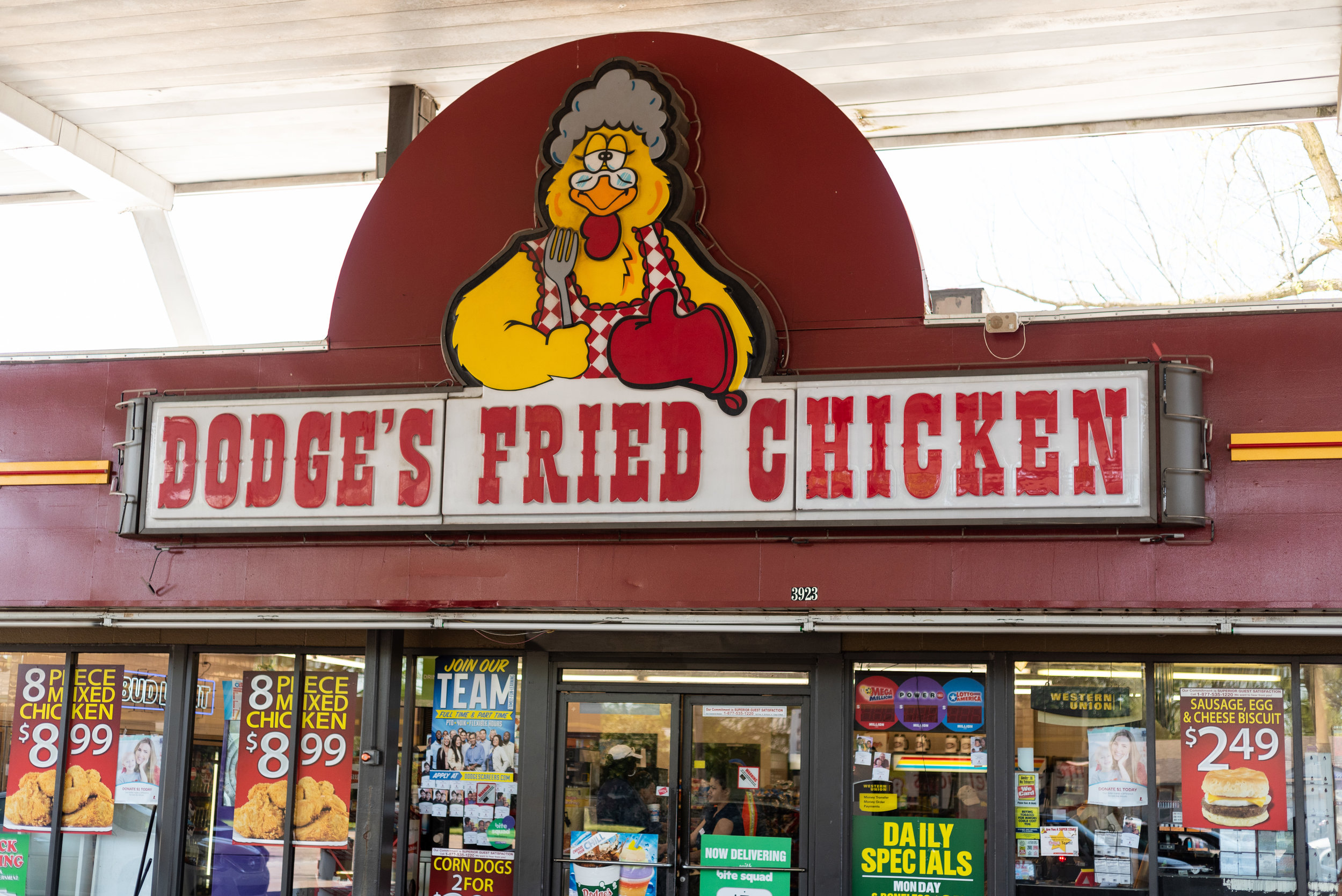 Looking back, I consider this state fair-style restaurant and gas station—and the circumstances under which I ended up stranded there—as a uniquely Mid-Southern experience. The establishment in question on that day was a Dodge’s Fried Chicken, a regional chain of gas station restaurants based in Tupelo, Mississippi. Dodge’s Fried Chicken was established and became successful in 1976 when two gas station chain owners, Henry and Bobby Dodge, decided to start selling fried chicken inside of their gas stations located across the region. Since then, the chicken chain has no doubt provided delight to patrons in need of filling their gas tanks and incidentally their stomachs. 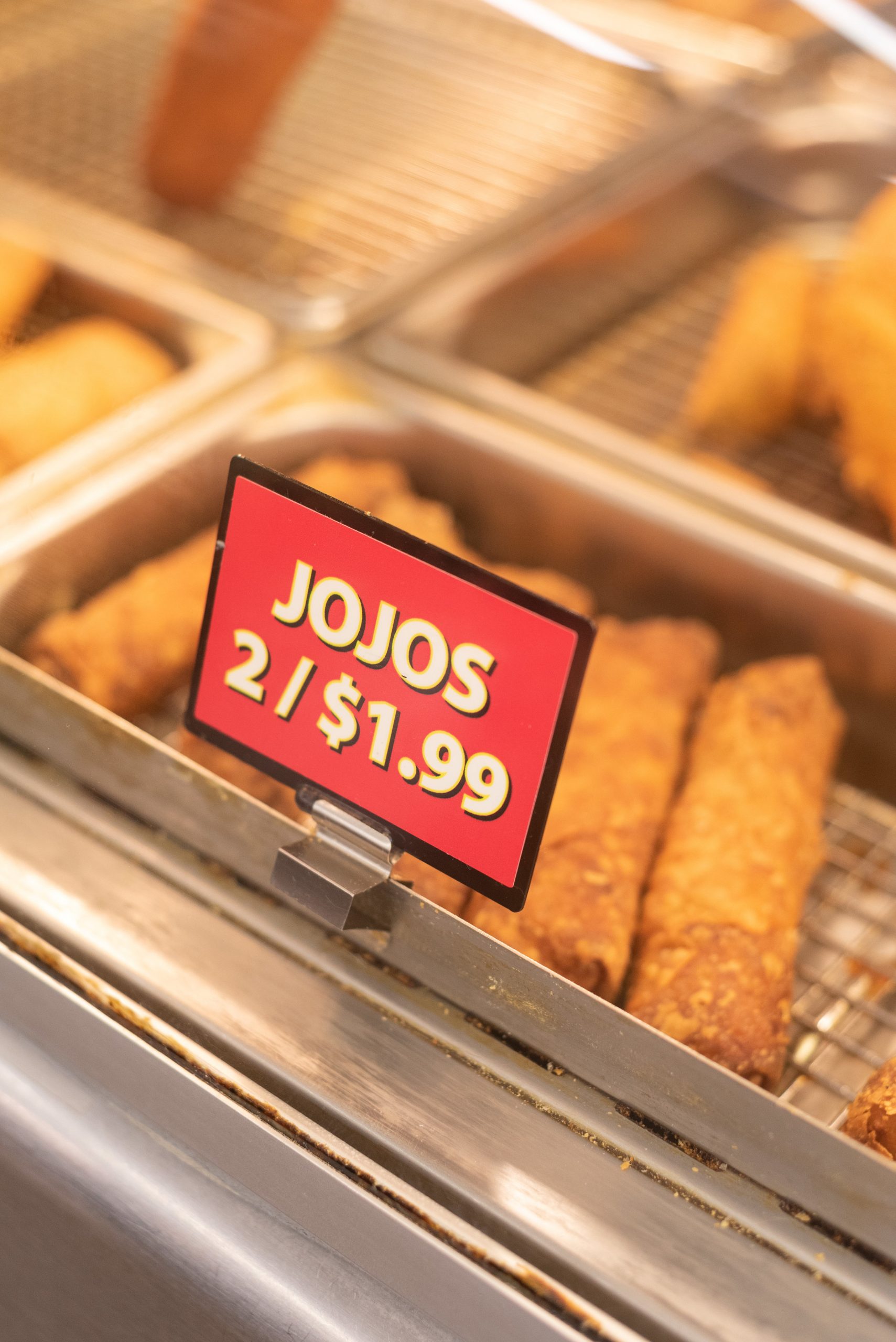 I recently found myself at another Dodge’s Fried Chicken on Elvis Presley Boulevard, a few steps away from Elvis’s home in Memphis. Dipping a fried potato wedge, also known as a jo-jo, into a container of honey mustard dressing while simultaneously pumping gas, I found myself wondering if there were other Dodge’s-like establishments I’d been missing out on.

Soon I was on a search for more places where Southern-style comfort food and gasoline merge. 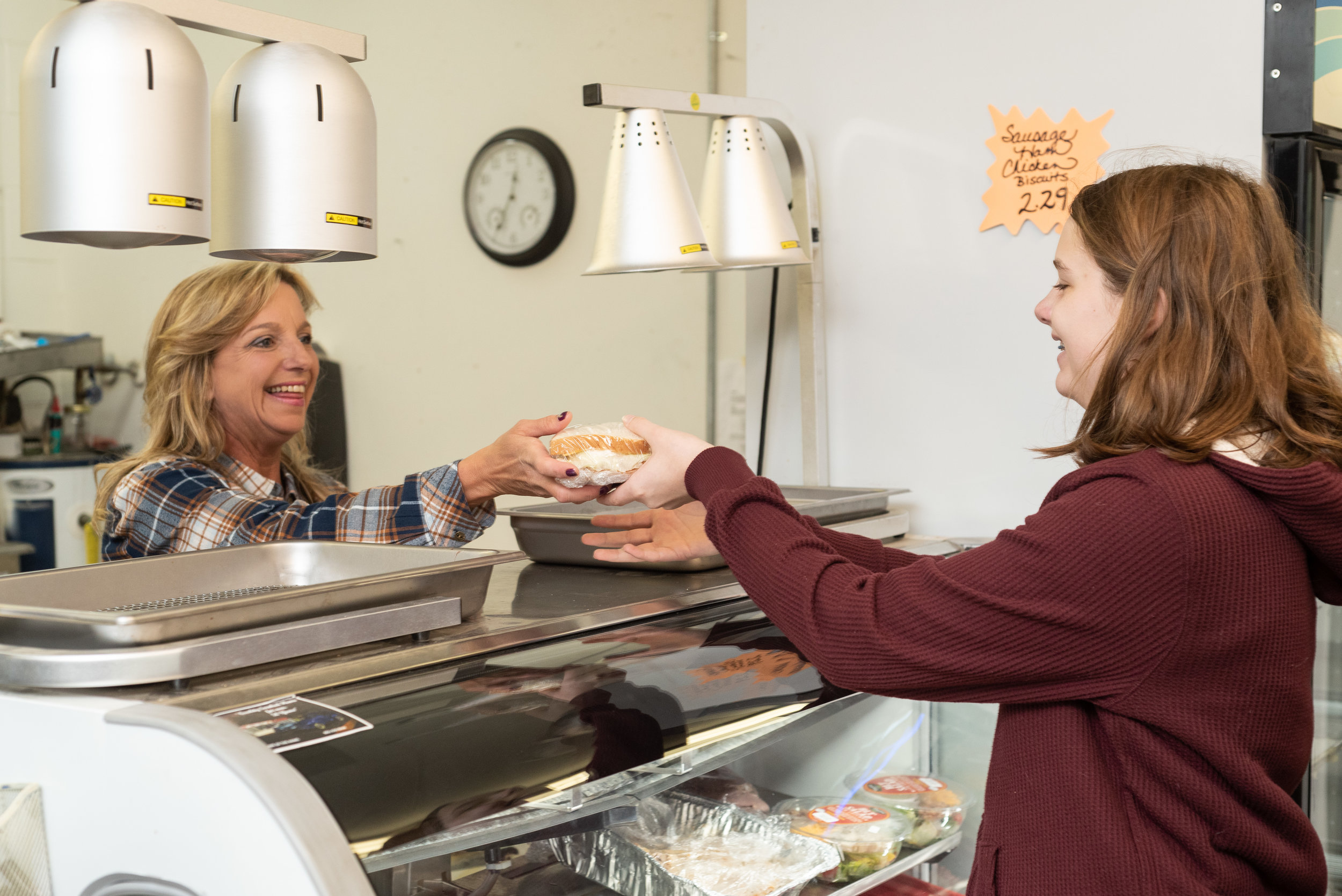 My search led me one Sunday morning to Home of the Hams in Eads, Tennessee. Upon arrival, I admired the vintage gasoline pumps outside. At the entrance was a sign that read “Treats by Teri” with a drawing of a woman sitting at a bistro table with a poodle. Underneath the drawing was a pricelist for chicken salad, pimento cheese and nine varieties of whole pies. Inside I found a selection of Yoder’s fried pies (perfect hand-sized pies with a cult following, made by an Amish family in Whiteville, Tennessee), a bowl of fresh whole jalapeños by the register and, of course, a lot of ham. Steeped in Memphis food lore, Home of the Hams is famous for the simple perfection of a smoked ham sandwich, and now people are also coming in for Teri Allen’s pies and chicken salad. 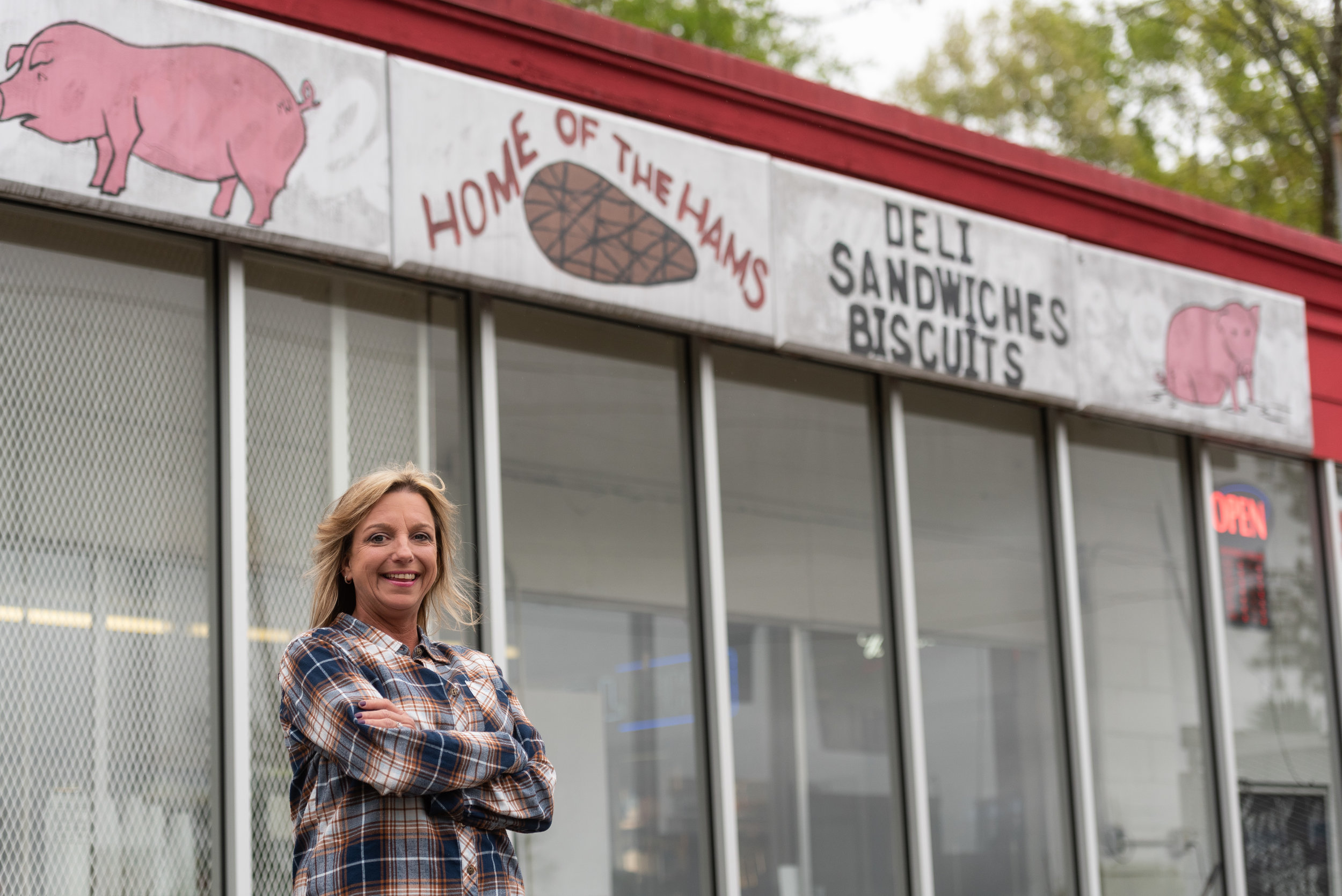 Within moments of my arrival, I met Lisa Graves, who told me that she loves working at Home of the Hams and that she stays there for the customers. “They are like my little Eads family,” Lisa says.

While Lisa was making me a ham sandwich to go, the owner, Mark Welch, arrived. Mark told me the history of his store, which he bought from Conn Canale in 2016. Conn owned the business, known as Canale’s Grocery, from the 1960s to 2015.

“Conn stuck around when we opened, and he made sure our kitchen crew knew how to make the hams. We had the recipe deeded to us when we bought it,” Mark said.

The recipe for the smoked ham came from Charlie Vergos, of Charlie Vergos Rendezvous fame. Canale’s Grocery once sold feed for animals, and Vergos would have the feed delivered to his home, which was nearby. “One day Mr. Vergos gave Mr. Canale an old smoker, and proclaimed that he would give them the ham recipe that the Rendezvous once used,” says Mark.

In 2015, when illness forced Canale to close the family business, Mark—who also owns a regional trucking equipment company—thought it would be a good investment. “I lived down the street and we [Mark and his kids] would stop there every morning, and we loved it,” Mark adds. 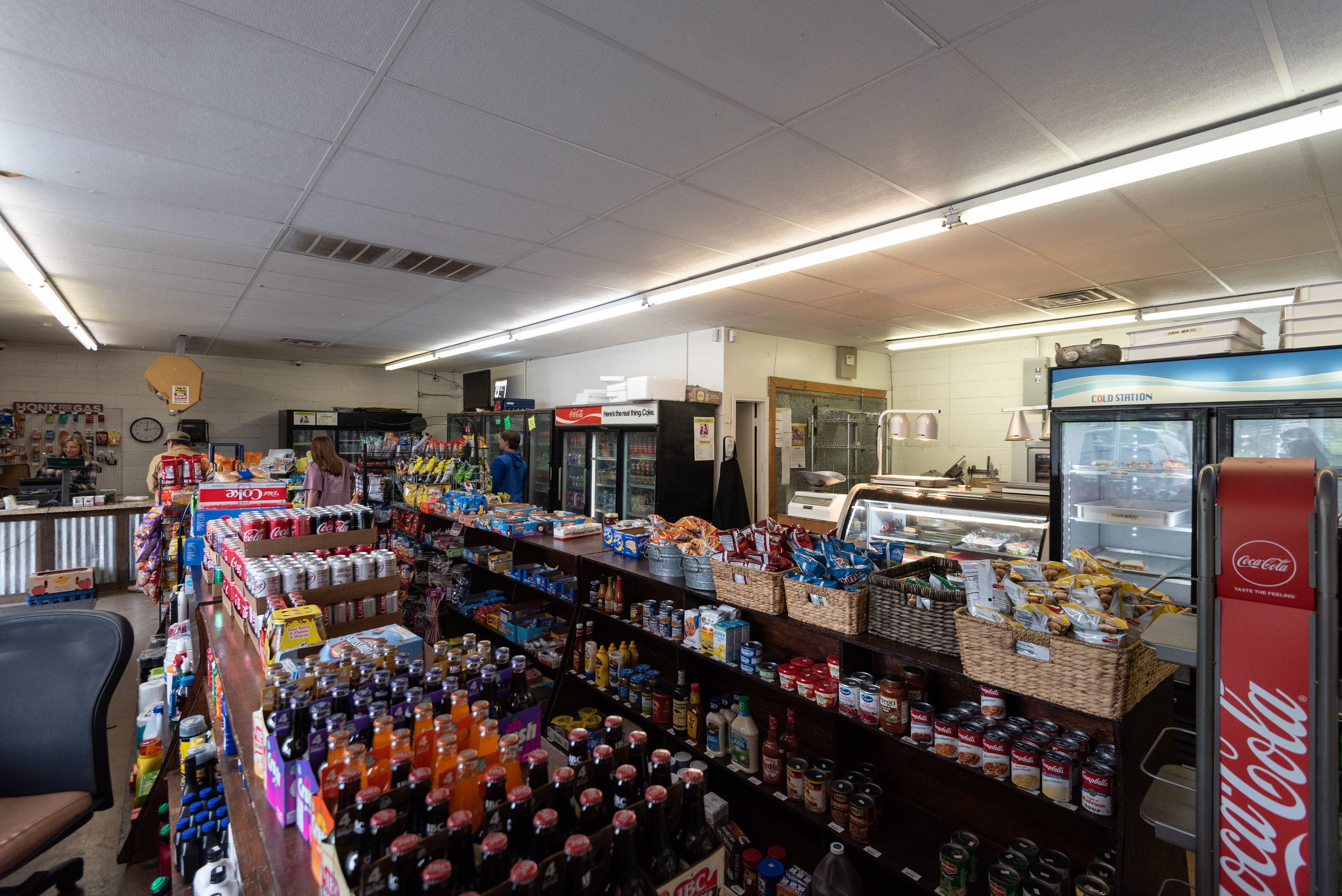 Mark asked Susan Doss, who has managed gas stations for most of her career, to be the store manager for Home of the Hams in 2016. Susan says the hams are smoked twice a week for six to eight hours, and then seasoned, wrapped and left to rest for 24 hours. In addition to the sandwiches and ham by the pound, customers come for the gas, says Susan. “We still do full service for some people that we know want it. We sell 87 octane and 93 octane,” she says. “We also have a credit box for some customers, like an old-fashioned store. We give them a handwritten credit receipt, and total it up at the end of the month.” 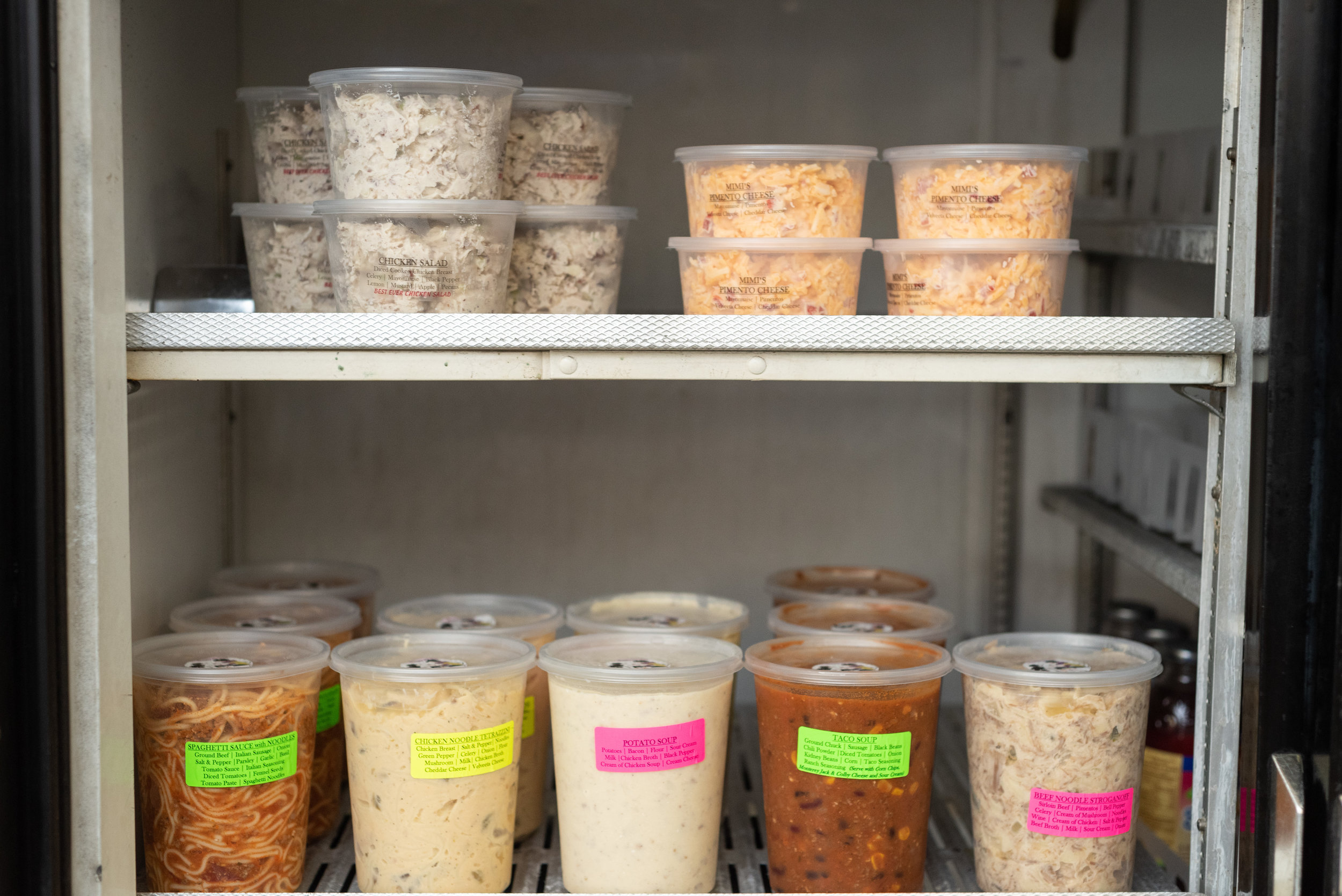 Mark says other big sellers for the store are the chicken salad, pies and other treats made by Teri Allen of Treats By Teri. “The chicken salad has a huge following,” Mark says.

Teri works as executive protection at FedEx (and, yes, that means what you think it means). “I started cooking for the executives that I protect, and everyone kept telling me, ‘Teri, you could get rich selling your food,’” she says. “The next thing I knew, I had a giant veterinarian bill to pay and decided to get a commercial kitchen.”

Teri sold around 500 fudge pies in a span of two months at Katie’s Kitchen in Germantown. Shortly after her success at Katie’s Kitchen, Mark contacted her to sell her food at Home of the Hams. “I’ve done a lot of business in a lot places,” explains Teri. 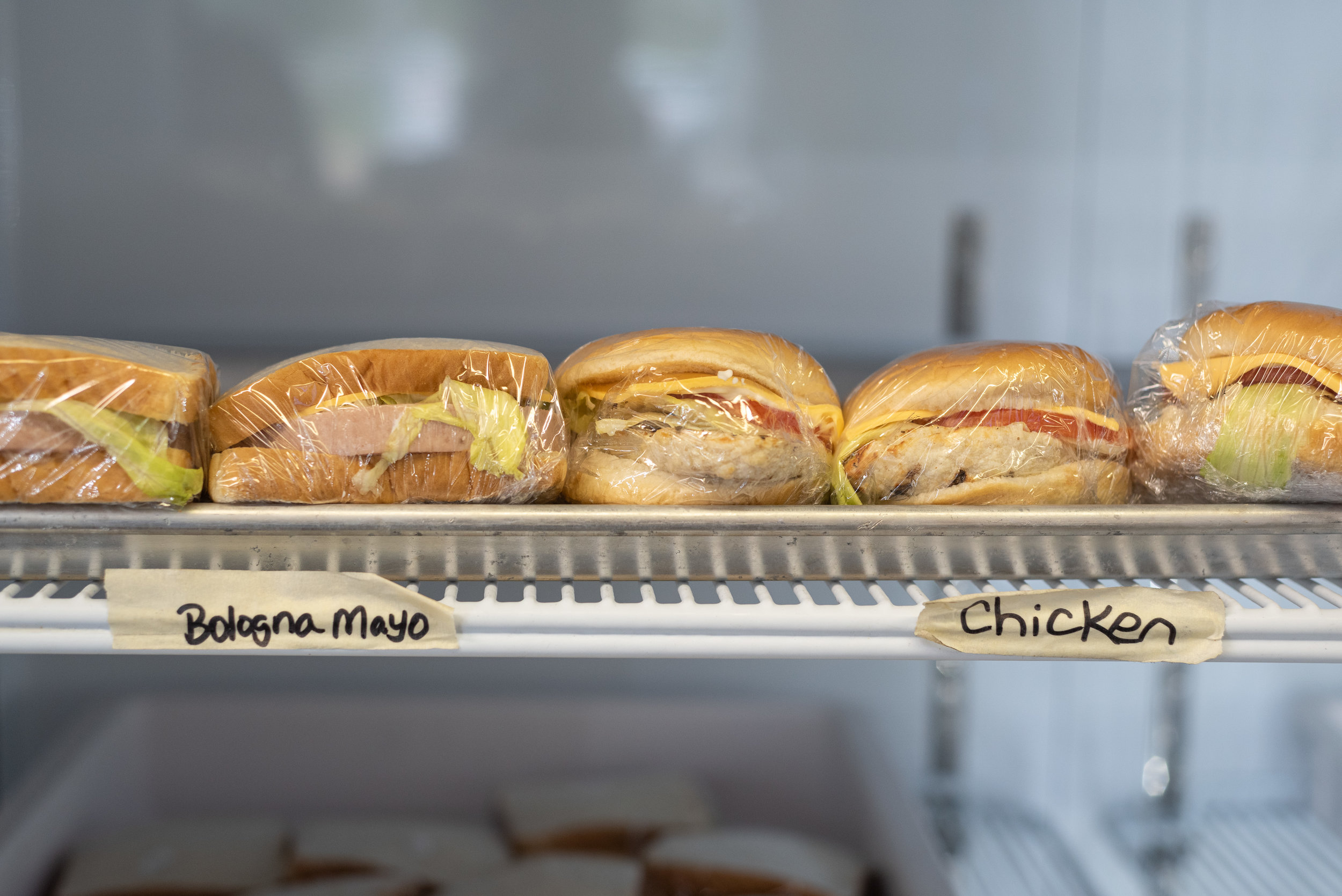 “Home of the Hams is about that down-home country service. Mark loves my food, and at the end of the day he gave me a chance to play.”

Teri says her slightly sweet chicken salad—which is full of crunchy apples and pecans and labeled “Best Chicken Salad Ever”—is maximized when it’s served on raisin bread. Teri also sells a lot of Harvey Wallbanger cakes at the store. The cake is a tender pound cake made with vodka and Galliano and topped with a buttery orange glaze. 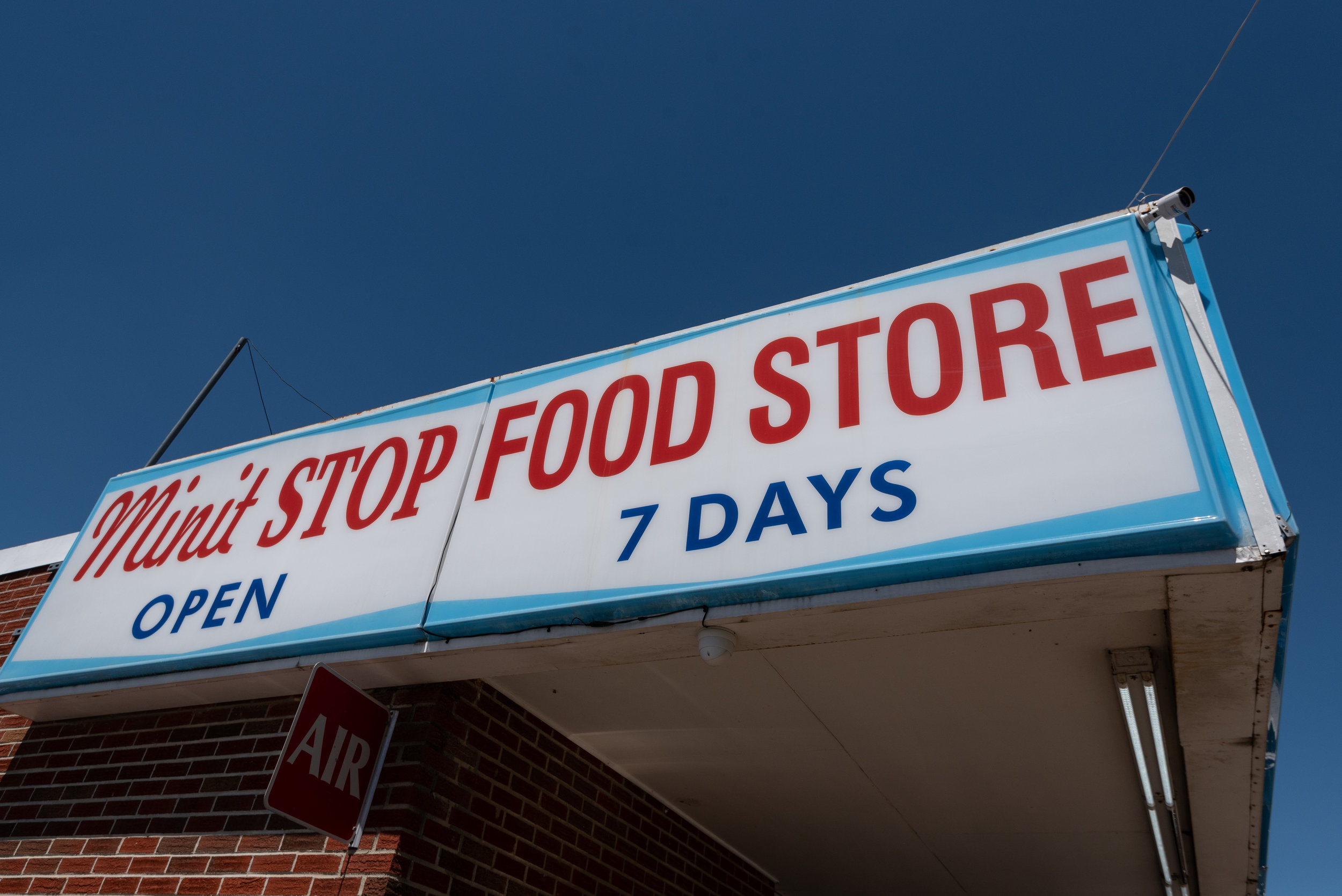 Another gas station serving comfort food to repeat customers is Minit Stop in Bartlett. The restaurant posts a photograph of its lunch special offerings on its Facebook page daily. Minit Stop’s menu is a meat-and-three style menu that often includes Southern classics like hamburger steak, chicken and dumplings, yams, and macaroni and cheese.

Miranda Carlisle, a cashier at the Minit Stop, tells me that around 90 percent of their customers are regulars. “Everything is homemade. We all do everything, and the breakfast is the best,” she says. I asked a handful of people what I should order when I visited, and the responses were delivered with the sort of enthusiasm that indicated that this was their spot—this wasn’t their first Minit Stop rodeo, and it won’t be their last.

Even as Memphis dining options grow, there is something to be said for the simple convenience of fueling your vehicle and grabbing a chicken biscuit.

I, for one, am happy to be able to get in line for a horchata at the Taqueria Express truck parked at the Superman Market gas station on Highland and Summer Avenue. Or, when the timing is right, fuel up my car while I wait for a pound or two of fresh crawfish from the various seafood trucks parked at Memphis gas stations during crawfish season. After my visit to Home of the Hams, I sat in my car and unwrapped the clear plastic off of a sandwich full of thick ribbons of smoked ham, glad to be part of a food culture that can still support and appreciate a gas station ham sandwich.

Jayne Ellen White has worked in the Memphis tourism industry for 12 years. She is a Memphis music history enthusiast and an adventurous home cook. @jayne.ellen.vv

Cooking for a Crowd

New Baker on the Block