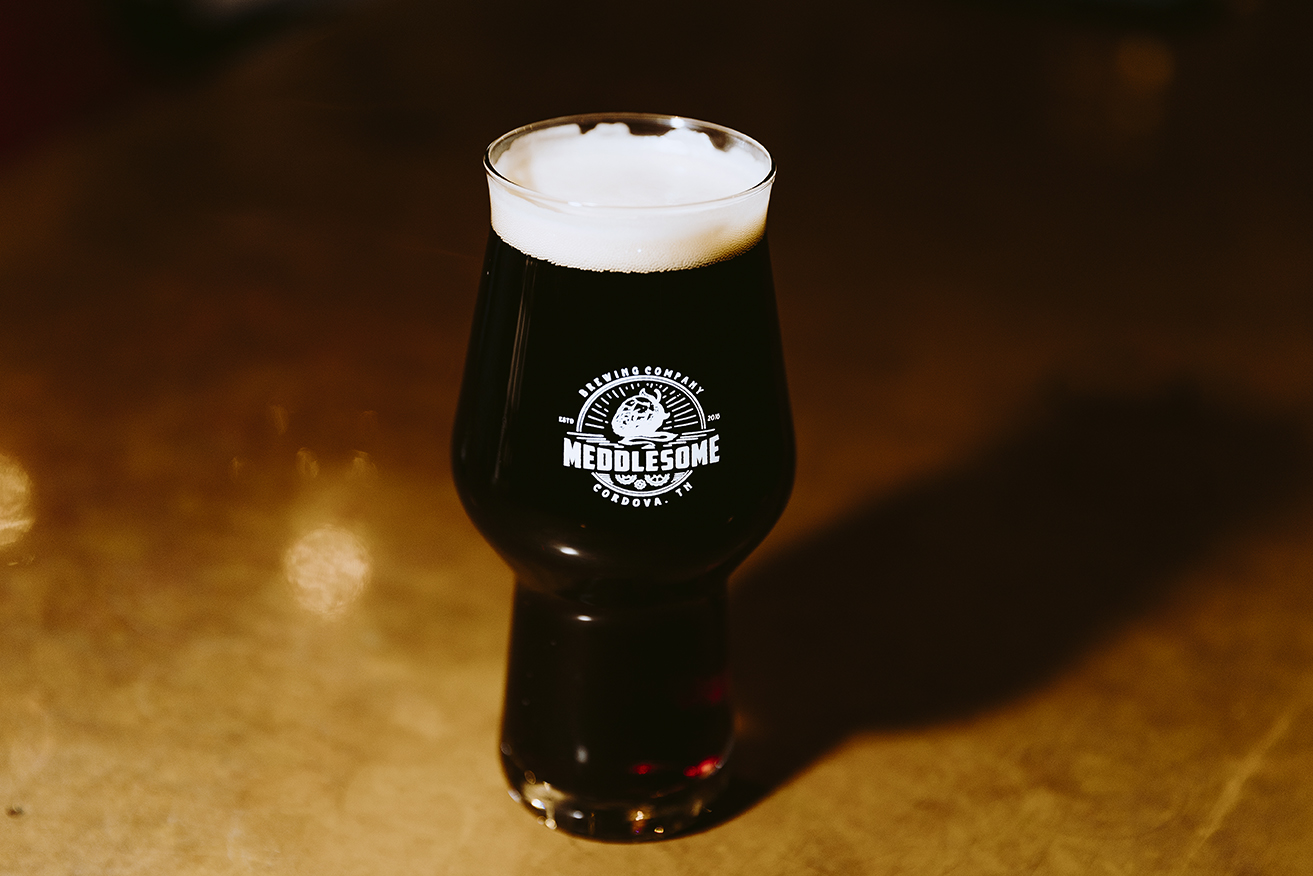 If you’ve lived in Memphis long enough, you know everything is based on “The Loop,” aka the circle of I-240 that encases a large portion of Memphis.

Unfortunately, a lot of cool stuff is concentrated inside The Loop, making it hard to start something great outside its asphalt bounds. Until now. 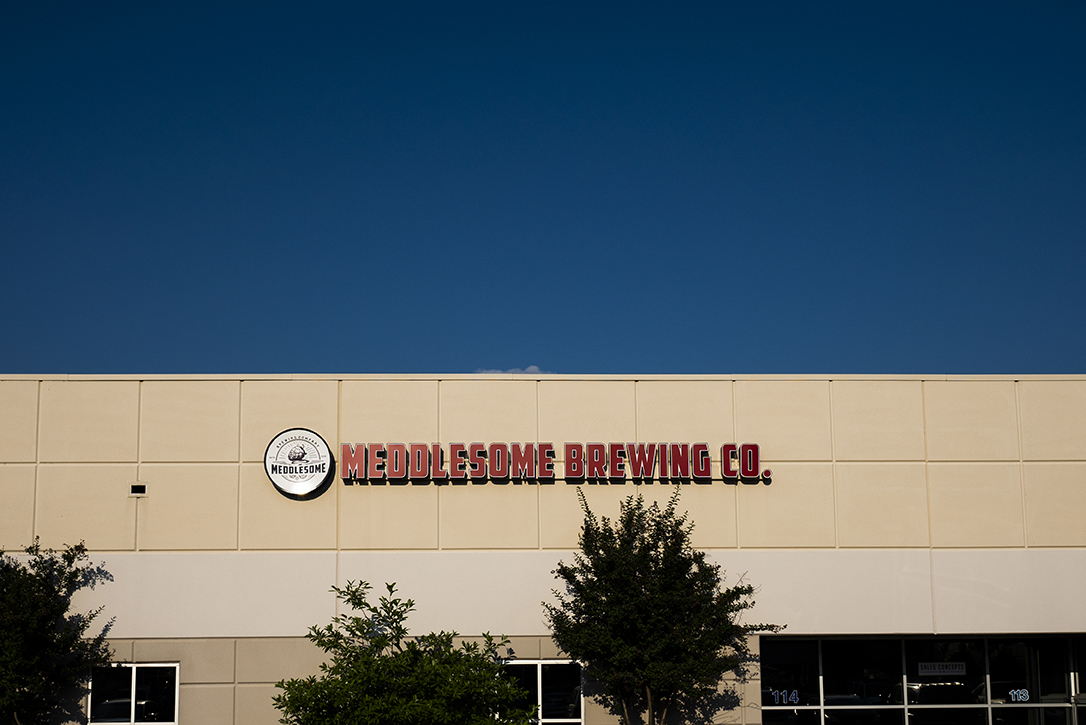 Meddlesome Brewing Company is making waves out East. I sat down with one half of Meddlesome’s duo, Ben Pugh, with a pint of Champagne Campaign, their brut IPA, in the massive taproom to discuss their meddling ways.

Both started out as homebrewers in their early 20s, and it’s a dream fulfilled to finally have their own brewery. 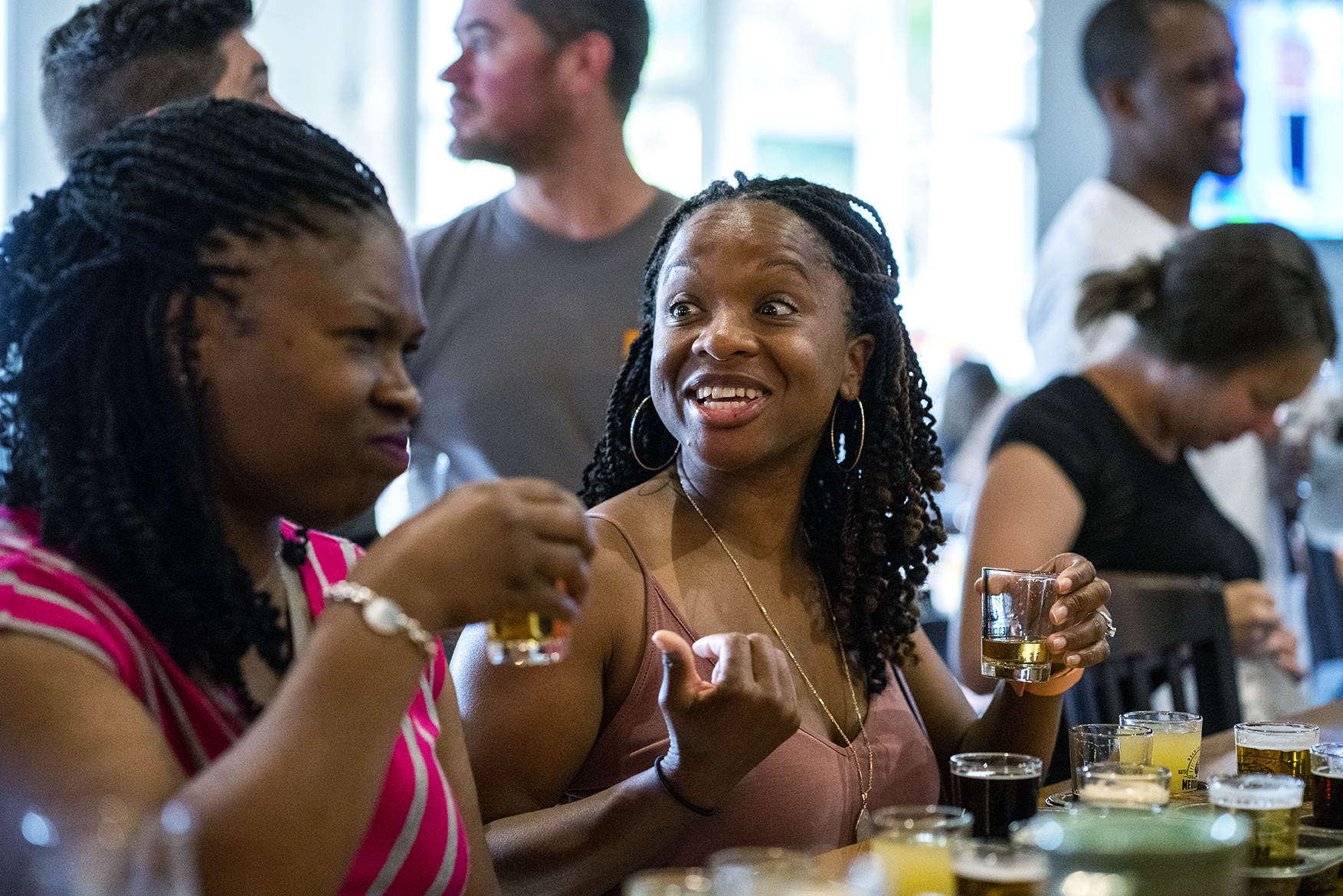 This taproom is not in Midtown or downtown but in the “Dirty Dova” (also a Meddlesome beer, FYI), located on the northeastern edge of Shelby Farms.

Why Cordova? Ben and Richie made a very deliberate decision to open the taproom out East. They were intent on spreading quality craft beer across the Mid-South.

Also, they neighbor Shelby Farms Park, the Shelby Farms Greenline and the Wolf River. What do active people love more than being active? Beer. “When nice weather comes, this place is packed with sweaty people drinking beer on the back patio,” says Ben.
Side-note: Did you know drinking beer for your health is a thing?  Meddlesome uses the highest quality ingredients, so their athletic customers are faithful to their post-workout brew. Yes, beer in moderation comes with a lot of good stuff perfect after a hard workout. Beer, especially high-quality craft beers come with sugary carbs, a bit of electrolytes and plant-based nutrients from hops, yeast and barley. (Trust me. I’m a dietitian drinking a beer right now. Did I exercise before this? No. But science…) 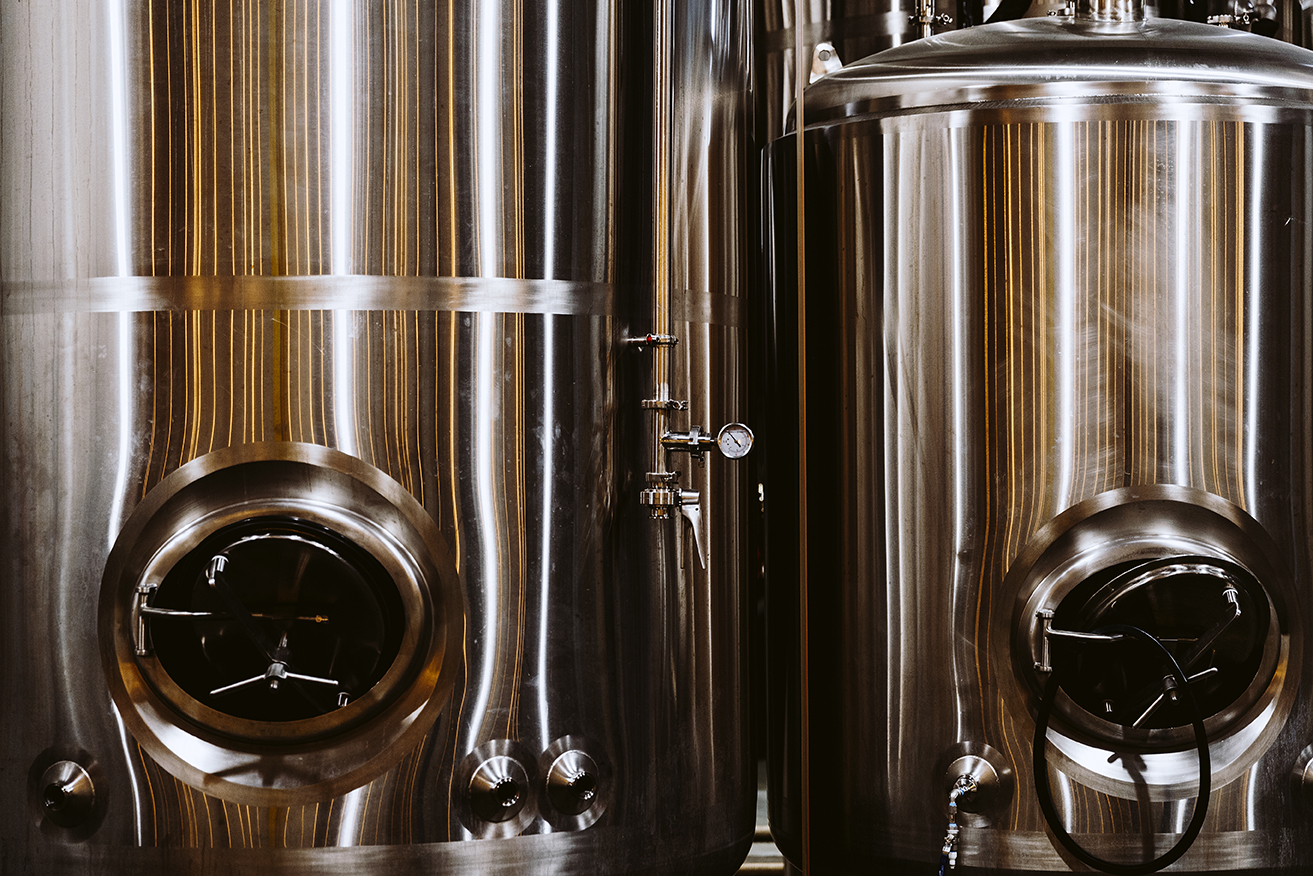 Another twist to the origin story is Meddlesome opened in an industrial park—and Ben says the landlord was puzzled by the proposal to put an entire brewery in the space.

“An industrial park isn’t built for heavy foot traffic, but more of a come-and-go presence of customers,” Ben explains. “The people that own this place are out in California, and they had no idea if or how we could open a brewery in an industrial park.”

Luckily, Ben spent over a decade selling equipment to brewers so he knew the technical issues inside and out and was able to convince the proprietor it would work. They took a “sterile box of white walls” and turned it into a taproom that looks like it’s been there for years.

Ben, holding a beer in one hand and gesturing with his other hand, proudly declares: “We built all of this by hand! That badass gear coming out of the ceiling? We made it. The bar? Made it. The shelves in the corner? OK, we bought those, but we put them together.”

It was all a labor of love. Now Meddlesome is just shy of two years old and has over 300 accounts. And as Ben and I are chatting on a Wednesday night, the taproom doesn’t have an empty seat.

They also spread the love as much as possible. Meddlesome serves as a host to local food trucks, allowing local food entrepreneurs to sell their products to the taproom customers. I paired my Champagne Campaign with an incredible Polish sausage on a brat bun from Lynnie’s Links & Drinks. Other trucks that frequent the taproom include 9 Dough 1, Cousins Maine Lobster, Smoke and Rolls and El Mero Taco. 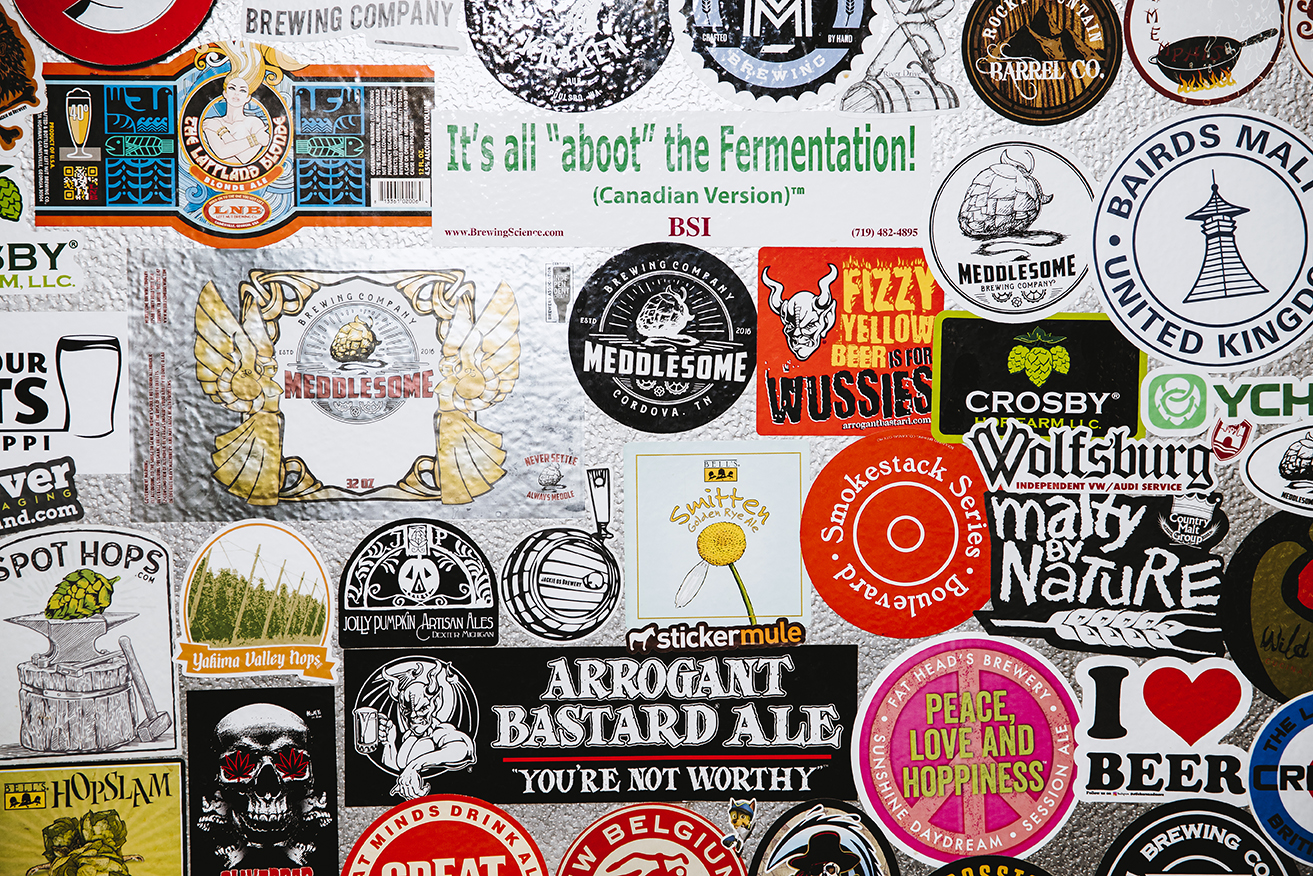 Ben hopes Meddlesome’s success will encourage other food and beverage businesses to open up “in the burbs.” I asked what he, as a Cordova business owner and resident, thought might do well next in the Dova.

“We will need a good coffee shop out here,” he says. “Please, not another Starbucks or Dunkin’, but somebody local. I promise I would be there every day.”

“We started this brewery to have fun and challenge ourselves as brewers,” says Ben. He says their small-batch series, called the Troublesome Series, allows creativity and room to turn over new concoctions about every two weeks. They have a list of over a dozen test batches like a smoked porter and a blood orange IPA. Ben says the best way to keep up with their never-ending creations is to drop by the taproom or keep an eye on social media.

Where does Ben see Meddlesome in 10 years? “Basically, still in Cordova,” he says. “Still making great beer with cool names. But hopefully we will have Meddlesome in our own cans.”

For now Meddlesome is only on tap. To find out where to fill your glass or growler around town, use their handy-dandy beer finder. http://meddlesomebrewing.com/beer-finder/.

Alexandra Reed wants you to know one thing—she’s a registered dietitian, not a food cop. She has written and presented for several companies, including Girlboss Media, Cherry Bombe, Teach for America, Ignite Memphis and Thinx. Email coupons and compliments to notafoodcop@gmail.com.