0 0
From butcher to baker, this man is creating his own culinary education, one job at a time

Our #FamiliarFaces are people in the food scene whose faces you might recognize but whose stories you probably don’t know. They are good at what they do, fun to talk to and just seem interesting—people we all want to know more about. So we’re starting the conversation for you! 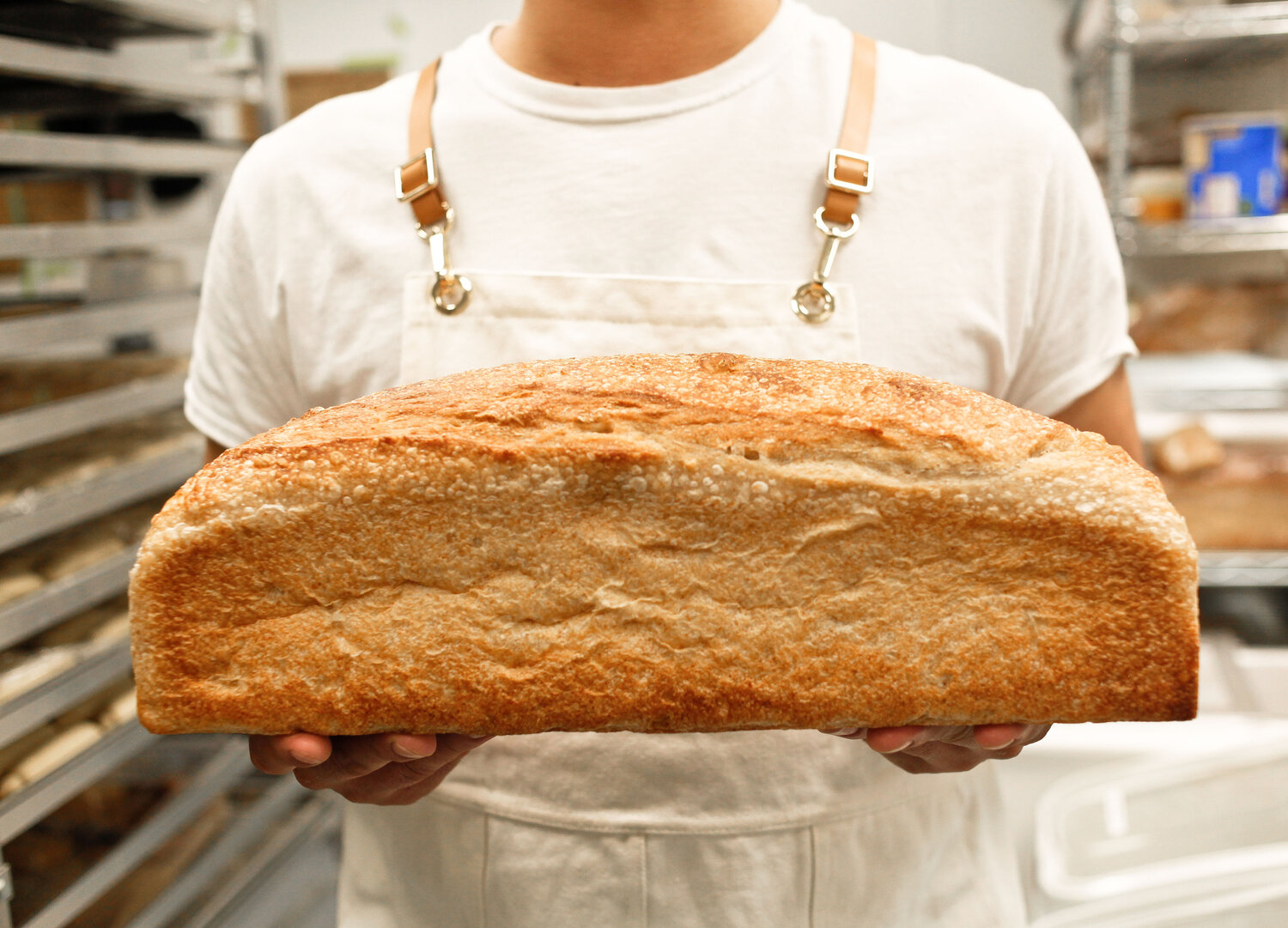 If you’ve spent much time in the Memphis or Nashville restaurant scenes in the last several years, you’ve likely met Jared Summers.

In his latest endeavor, he’s working as sous-chef and assistant baker at Hustle and Dough, which just opened its first brick-and-mortar location, inside the new Arrive hotel on South Main. Jared, his identical twin and their older brother grew up in a close-knit family and weathered the sudden, unexpected death of their parents in 2016. Today Jared is forging his own path, supported by the love of his family and secure in the conviction that his parents would be proud of what he’s doing. Edible Memphis sat down with him in Arrive’s lobby during Hustle and Dough’s opening week. We talked fermentation, the challenges of sourcing quality ingredients, family, music and more. 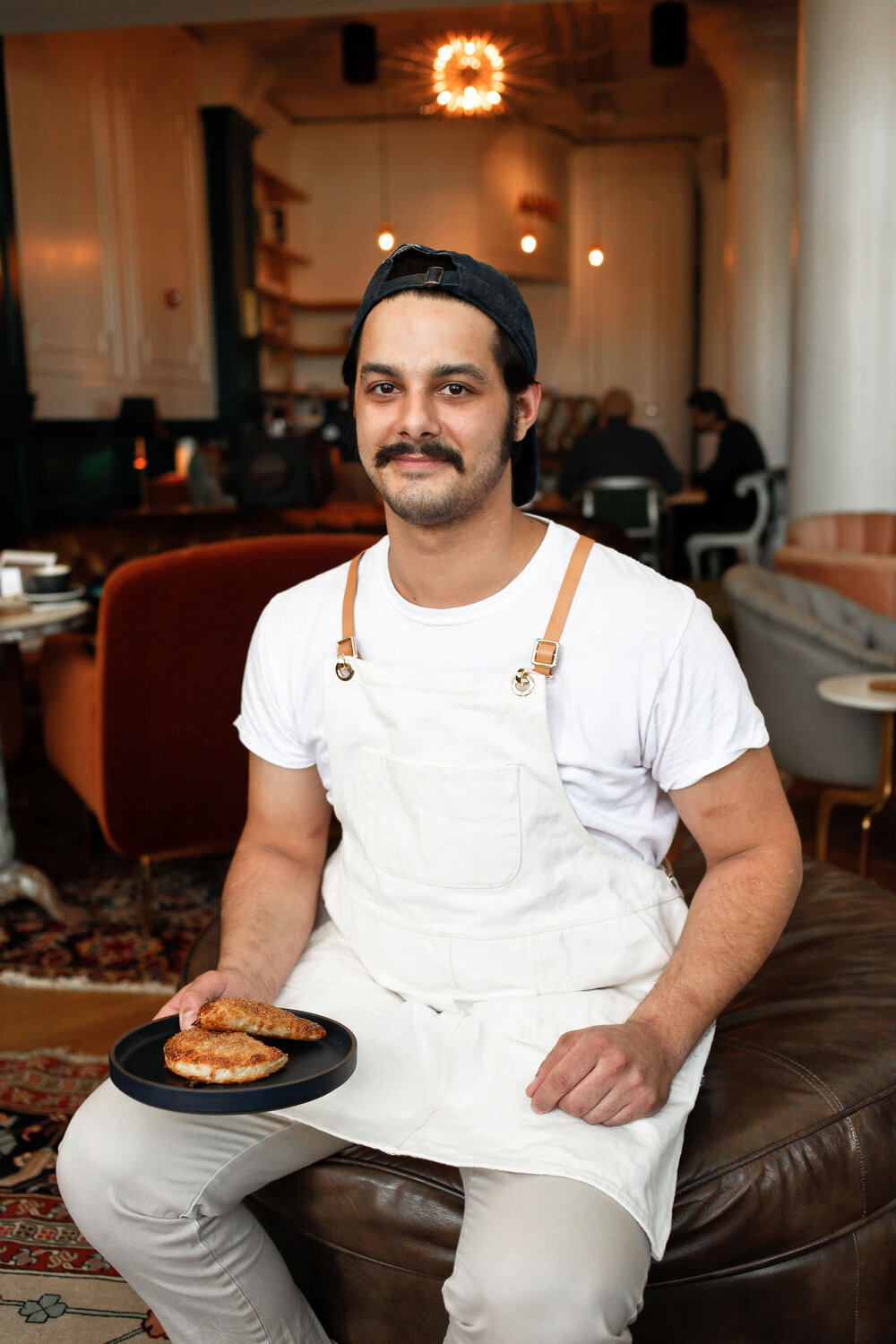 Edible Memphis: Tell us about how you grew up.

Jared Summers: My brothers and I were born in Atlanta and then moved to southern Indiana, and then Dad’s job brought us here. I would say I really grew up in Memphis; our core group of friends is here. My parents homeschooled my brothers and me so we could tour in a band.

Really—your parents homeschooled you so you could tour?

Yeah, they were very supportive of the band and would tour with us. We also played at the New Daisy a bunch, and my brothers and I would work shows there—whatever had to be done to get into shows for free. I was able to start working full-time when I was 14 years old. It was great.

What was your band’s name?

The Summers, from our last name.

So what happened next?

My brothers and I moved to Nashville to play music. I’m the asshole who broke the band up because I got offered a badass cooking job. 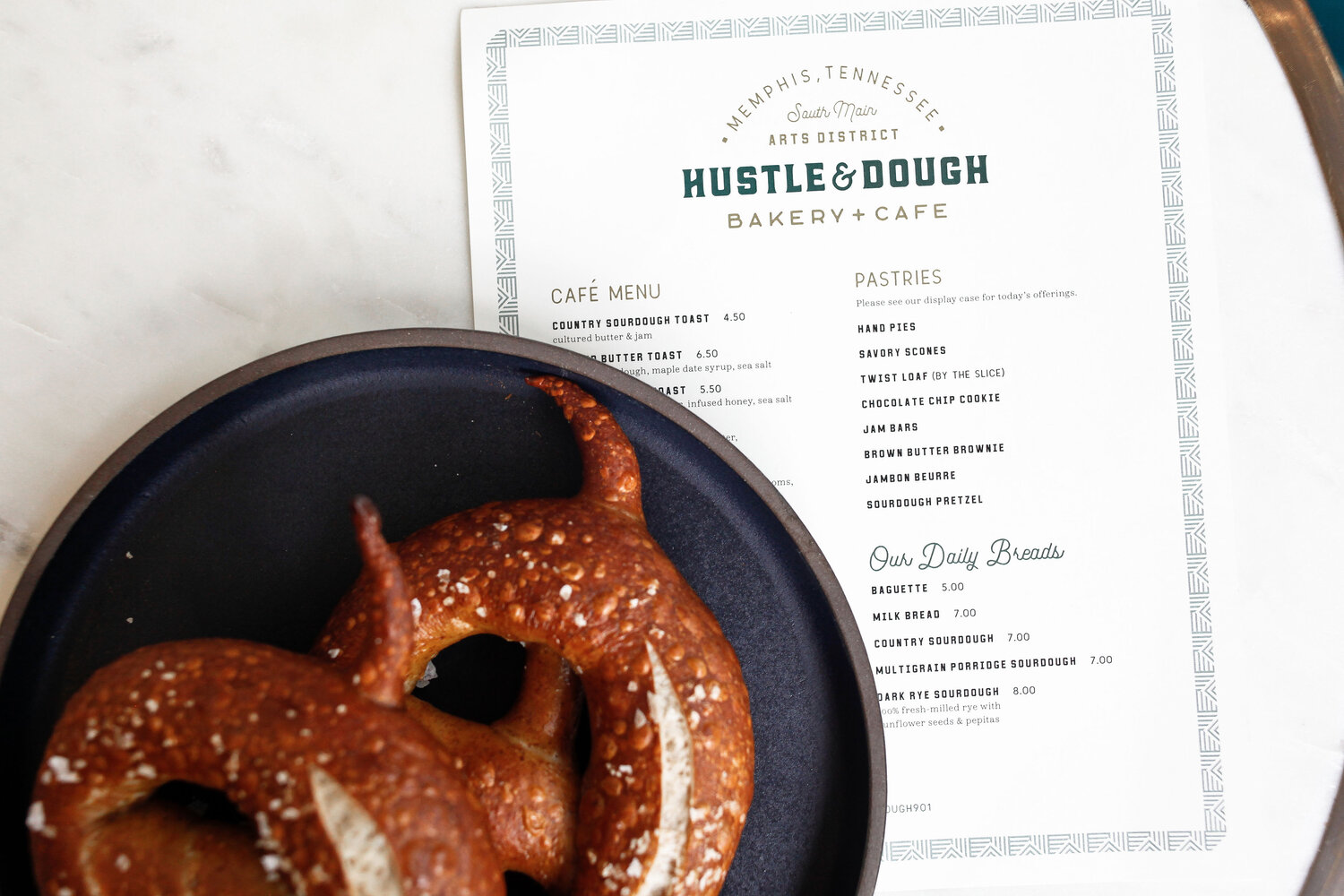 And how did you end up back in Memphis?

I’m actually here now because of a girl. We met at Catherine and Mary’s when that first opened up. We have three kids—our three cats. I have cousins here, but my family is all in Nashville. I miss them for sure, but Memphis has always had such a homey feeling because of growing up here. I like how toned down it is compared to Nashville.

You’ve done a lot in the restaurant industry. Tell us about the path you’ve taken.

I worked at Elfo’s Grisanti when I was 14. I started at Hog & Hominy when I was 15 years old; that was my first cooking job. I worked there for four years and then moved to Nashville, where I worked at Bastion, Folk and a few other places. I did a lot of freelance work doing private dinners at people’s houses. I love that shit so much—getting to know people and show them what I’m passionate about. I moved back here and opened up Catherine and Mary’s, cooking pasta there. Then I moved into another position with the company, where I was a pinch hitter between all of their restaurants—Andrew Michael, Gray Canary, private events. Then I was sous-chef at Gray Canary. 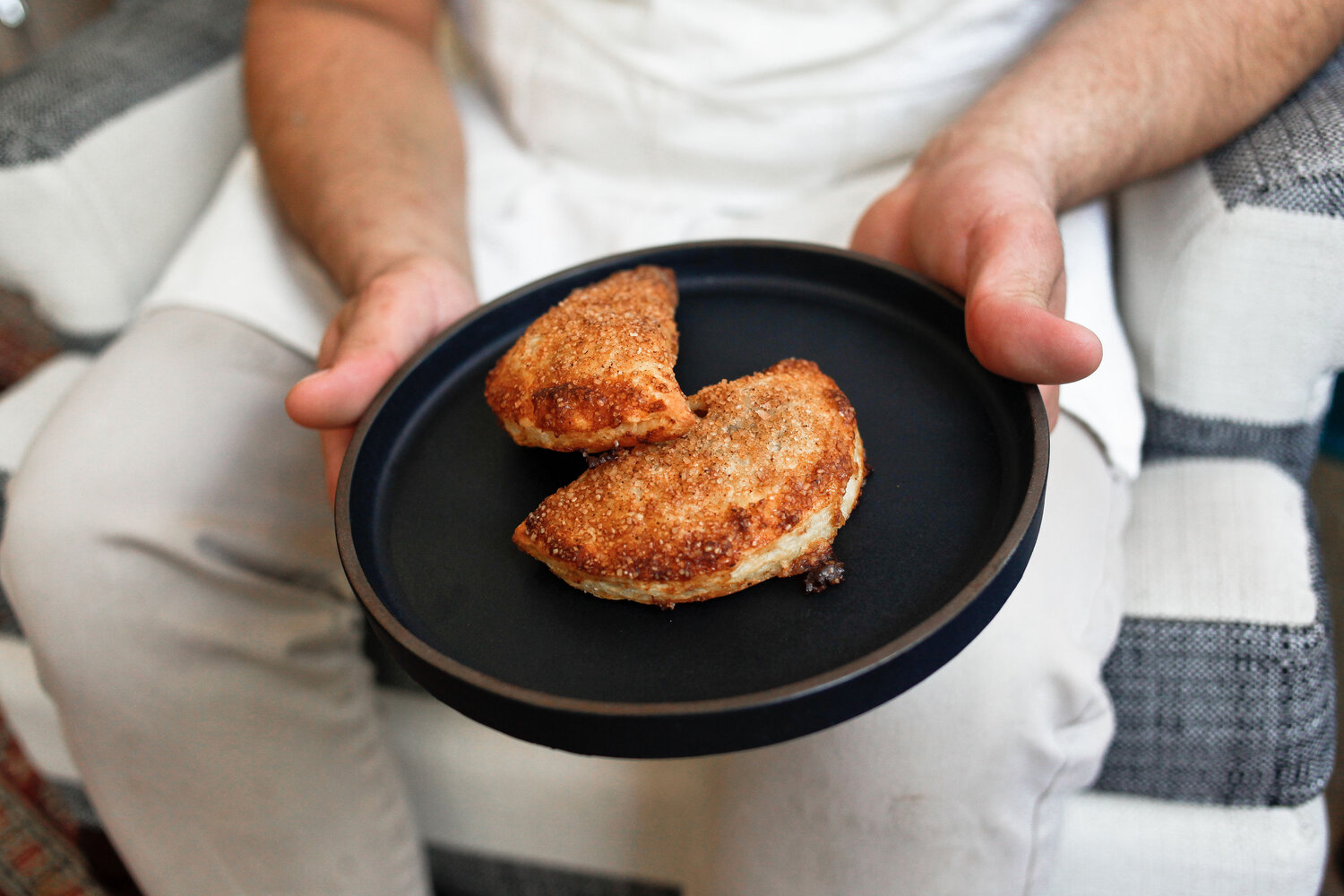 What are your responsibilities at Hustle and Dough?

I started working with Ali [Rohrbacher, owner of Hustle and Dough] four months ago out of her apartment, and she started training me. I’d never baked bread in a focused bread program before. We did a lot of the menu work for Hustle and Dough together. It’s been a lot of fun, but we’re making it hard by trying to think out of the box and do some things that aren’t being done around here.

It is the first sourdough bakery in Memphis. We’re culturing our own butter; it took us so long to source good cream to make butter with. But the bread is the main focus; there’s nothing like this in the city. It’s the fermentation—we’re not necessarily mixing flour and water; we have a live culture we’re feeding flour and water every day. That culture has been alive for six years. Over time it gets more funky and makes the bread taste better. And we’re sourcing grains we’re milling for our doughs.

What are some of the best things you’re making?

The pretzels are one of my favorite things. We make a really dope chocolate chip cookie. Our rye bread is 100 percent fresh milled. My favorite thing on the menu right now is our Tamago Egg Sando, a Japanese-style rolled omelet.

As we’re talking to you, you’re just in the middle of your opening week at Arrive hotel. What’s that been like?

This last month has been insane. But it comes with opening a restaurant. Arrive has been so supportive. They’ve made it easy for us to be set up for success. We got into the kitchen at the beginning of October. We had to quickly figure out our systems and how we were going to do all this. We had a lot of new cooks that needed to be trained, but everyone works really hard and does a great job. It’s been a lot smoother than a lot of other restaurants I’ve worked in. 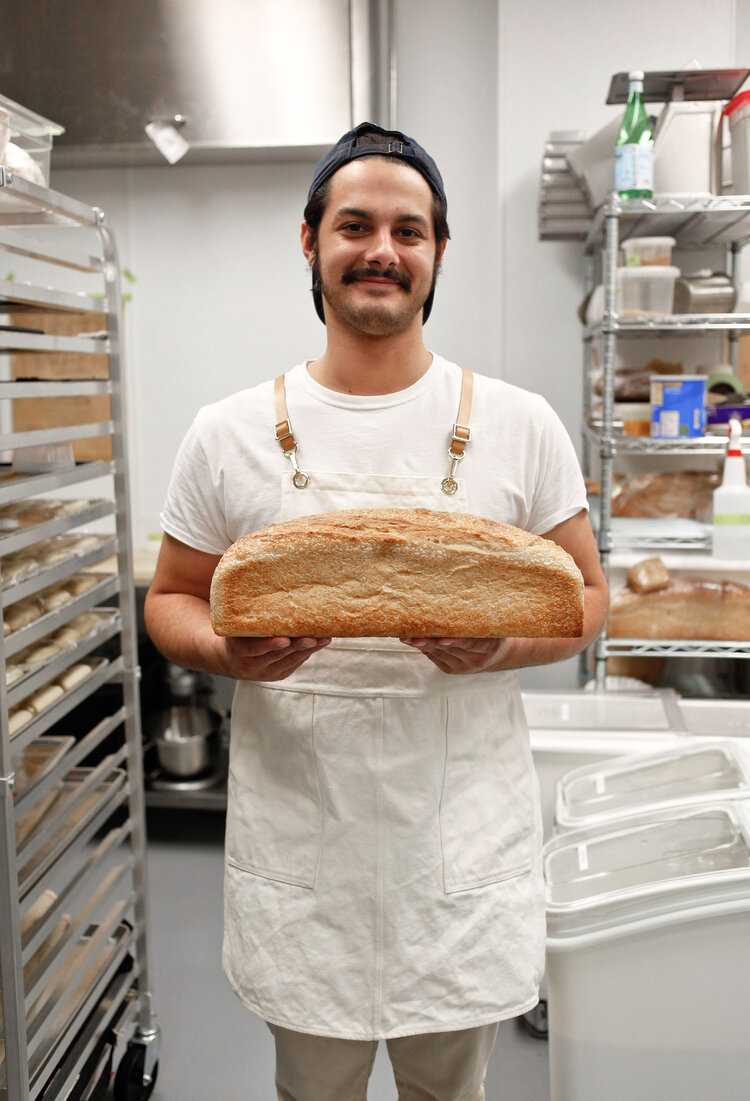 What do you love about your job?

It’s so much fun, so educational. I’ve been cooking 10 years—as a butcher, cooked on the line, sous-chef, tasting menu. I’ve done all kinds of work but never actually focused on baking breads. That’s another thing to throw under my belt for when I open my own restaurant. I was homeschooled through high school and didn’t go to college, so this is my education. The more that I know, the more it’s going to benefit me.

Do you still play music?

I play upright bass. I’ve played electric bass and guitar. I miss it for sure. It’s a piece of my life that’s not there anymore, but it’s not too hard to find people to jam with. I just have to find the time. When I’m not working, I usually want to spend time with my girlfriend or being lazy on the couch.

My dream job would be to have a restaurant, but also music is a thing that I would love to do. My mom was an amazing cook; she’s the whole reason I got into cooking. I cooked with her all the time in the kitchen growing up. My dream job would be having some sort of restaurant that I could still play music at. My brothers are both really amazing bartenders. The dream would be to open up a restaurant with them and all play music together.

Do you bake at home?

My girlfriend and I constantly cook at home—usually things that are pretty simple and easy. We like having people over. Last time we did breakfast burritos with chorizo and potatoes and eggs. We made churros and fried them up. We went all out.

What are you reading lately?

Relae: A Book of Ideas by Christian Puglisi. The Noma Guide to Fermentation by René Redzepi and David Zilber.

What music are you listening to?

I’ve been on this weird kick this last year of my life. My band was a punk band, and then we started this indie band. Then I got really into the Beach Boys and Beatles and then ‘80s and ‘90s hip-hop. If I could play music right now, it would be finding a great rapper and drummer and bluesy guitar player and doing ‘90s hip-hop.

What matters to you?

Family. My brothers. We’re all very close. Being able to see other family. That means everything. That should always be a priority for sure. You never know…

Have you ever been to Graceland?

I went two weeks ago to a venue across the street from Graceland. That’s the closest I’ve been. I do want to go check it out, though, since I love music and grew up playing music.

I love it. I was working at Pasta 409 until I could start here. [Owner] Daniel Masters, who’s such an amazing person, gave me full reign. Every Saturday I’d get up and go to the farmers market and get whatever the hell I wanted. I was trying to change the menu up daily. I just love walking around and seeing people get so stoked about these small businesses and these people who really bust their asses behind the scene to give you a tomato. When I’m old—but not really old—I’d like to have a sustainable farm. I’d have some chickens. Maybe not a cow because you have to milk them every day.

I busted ass on a Bird. Twice.

When a friend visits Memphis, where do you take them?

Slider Inn always—it’s a classic for me. Bardog is fun as well. I love going to the Gray Canary to eat oysters. And going to the zoo—it’s just fun.

What do you do for fun?

Skateboarding. I did that for years and stopped when I started working hard; I didn’t want to break anything. I would love to get back into it. Baseball would also be fun. I grew up playing baseball. It’s nostalgic for me. It reminds me of my dad.

I’ve had many. Andy Ticer and Michael Hudman were my first. They whipped me into shape and taught me to be a cook. Tom Bayless, who was my sous-chef at Bastion and executive chef at [Urban Cowboy] Public House in Nashville—I give him a lot of credit for the way I go about making a dish and putting food on a plate.

We love hearing stories like that about how people in the restaurant world can be so generous with each other.

It’s such a thing in the cook world. You learn something and want to pass it on to someone else. Like Ali—she’s definitely mentoring me right now. I’m learning so much from her, and one day I’ll teach that to someone else. Take it, learn from it and spin it into your own thing. It’s a cool industry. 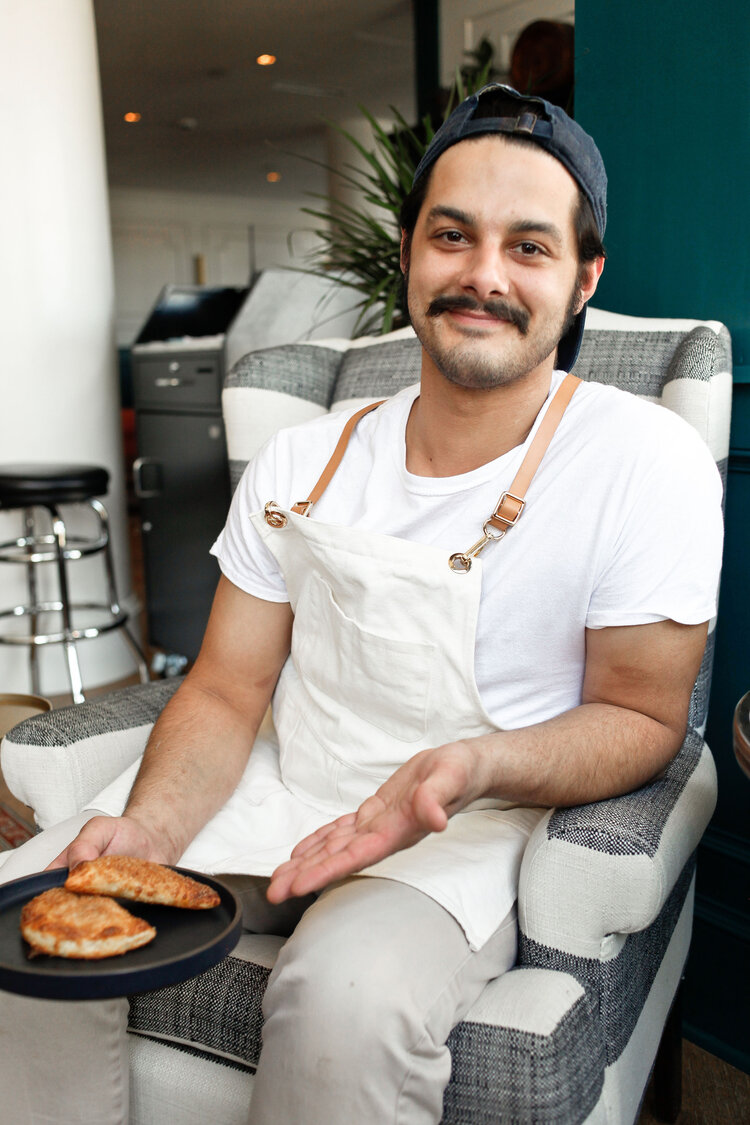 Where do you see yourself in five years?

Probably doing catering, doing private dinners for people. I love hanging out with people and getting them stoked about what I’m stoked about. It’s a gratifying feeling to see someone enjoy what you’re doing—being around people who are eating my food and seeing how much I care about it. That’s why I would choose catering.

If you could have lunch with any Memphian, past or present, who would it be? Where would you go?

I’d say my parents. I would probably bring them here to show them what I’m doing. They’d be stoked.

Kim Thomas is a lifestyle blogger and photographer based in Memphis. Launched in September 2010, her blog KP Fusion provides of-the-moment fashion, style and beauty tips and trends with a little Memphis flavor thrown in. @kpfusion

A Day in the Life at Caritas Community Center and Cafe