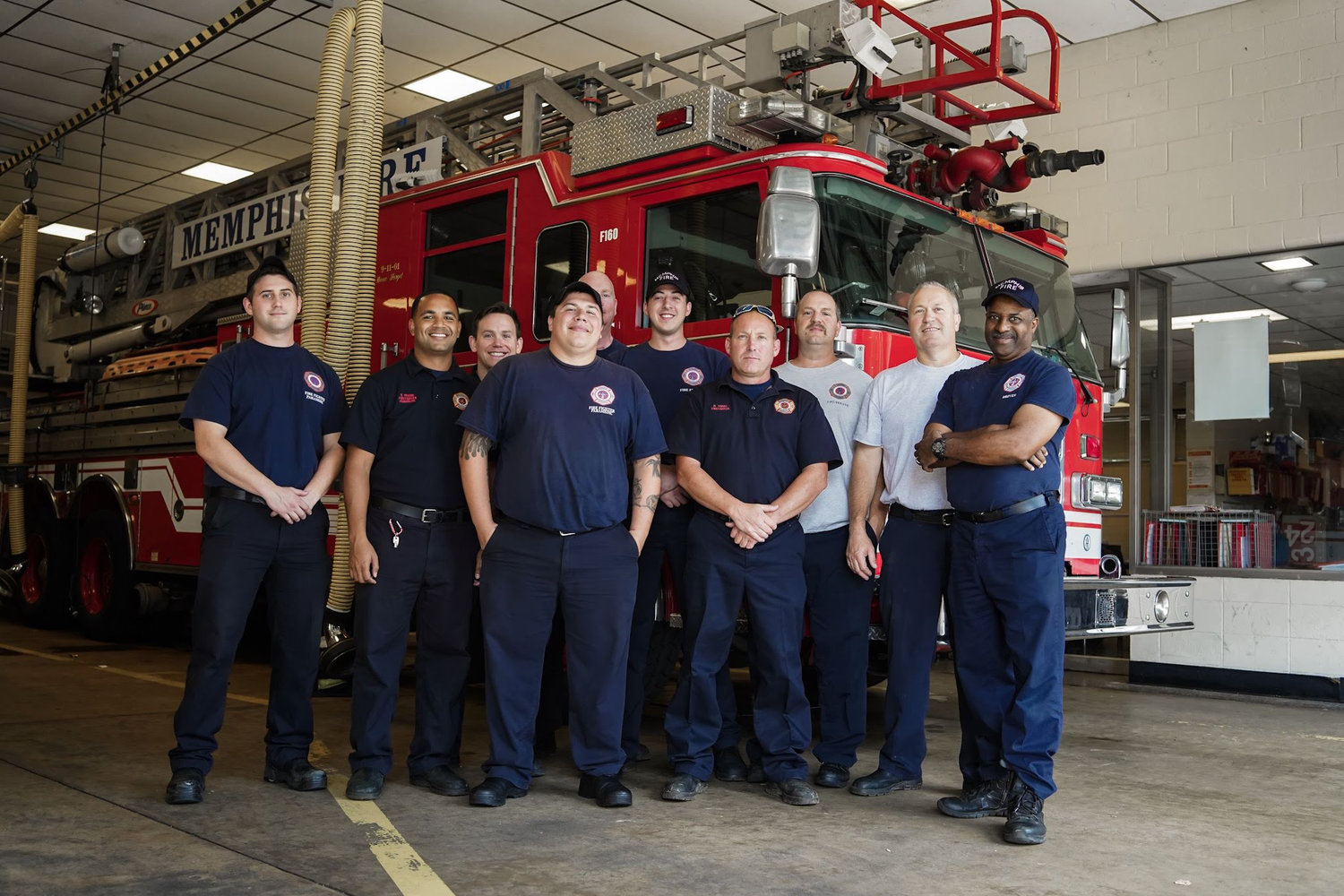 The City of Memphis Fire Station No. 38 serves the Whitehaven/Westwood area with 10 trained first responders every day. They work in three shifts—A, B and C—each with its own company of people who live and work together for 24 hours straight about 11 days out of the month.

Food enriches the dynamic of the unit.

He has a thick brown mustache and undisclosed fishing spots for his days off. Long has worked at 38’s, as they call their firehouse, for 16 years, over half his career. “Every station is different; every shift is different,” he says. “Not everybody cooks and eats all at once anymore.” 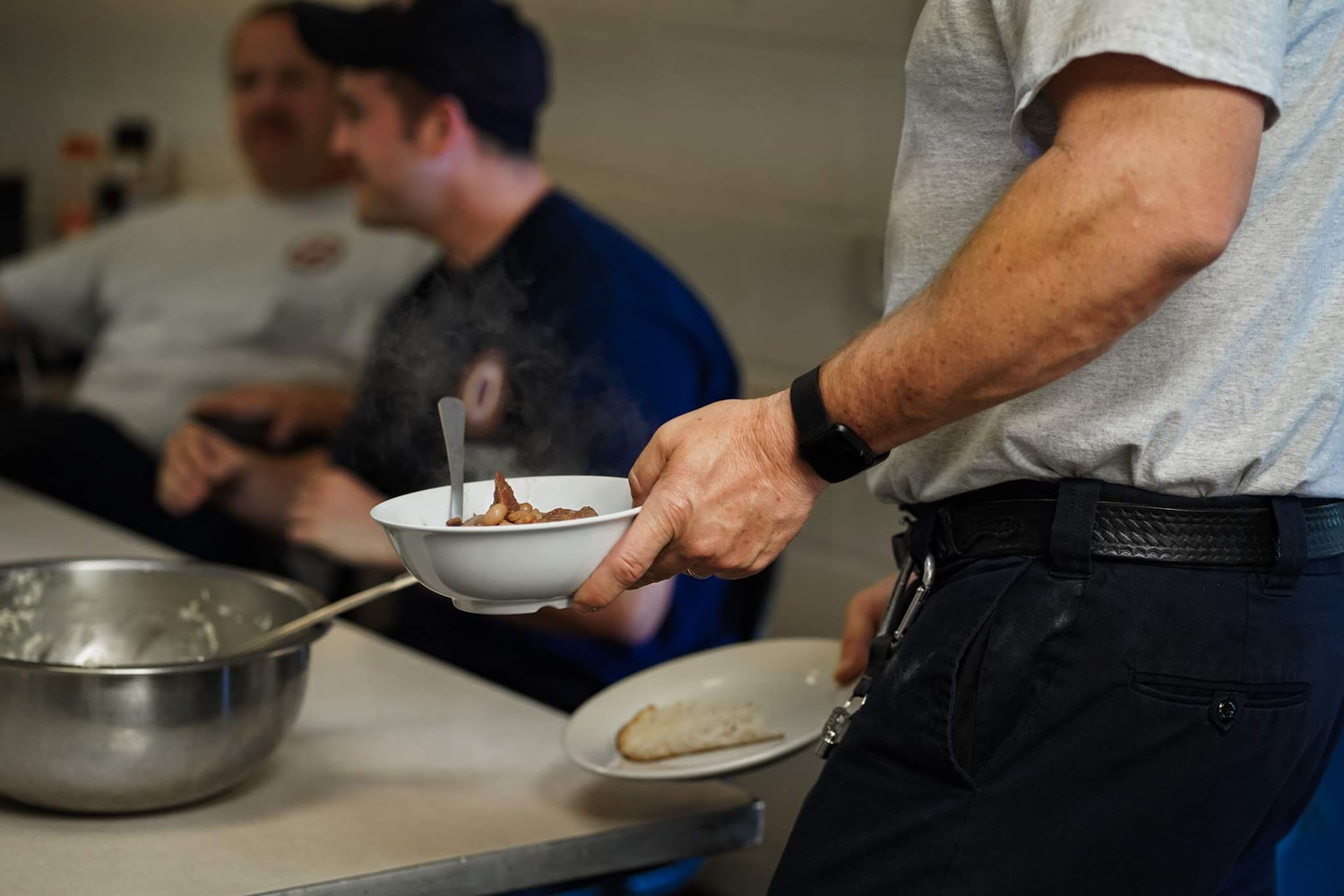 Built as a one-story building in 1970, the station has no pole to slide down but enough bays for a truck, a pumper and an ambulance. For the chief’s monthly inspection, the firefighters scrub the kitchen: the commercial stove and oven, speckled gray and white tiled floor, and robin’s egg blue cabinets. Against the wall are four refrigerators, one for each shift plus a community fridge. Same for metal pantries of dry goods. Everyone chips in a little on payday for essentials. 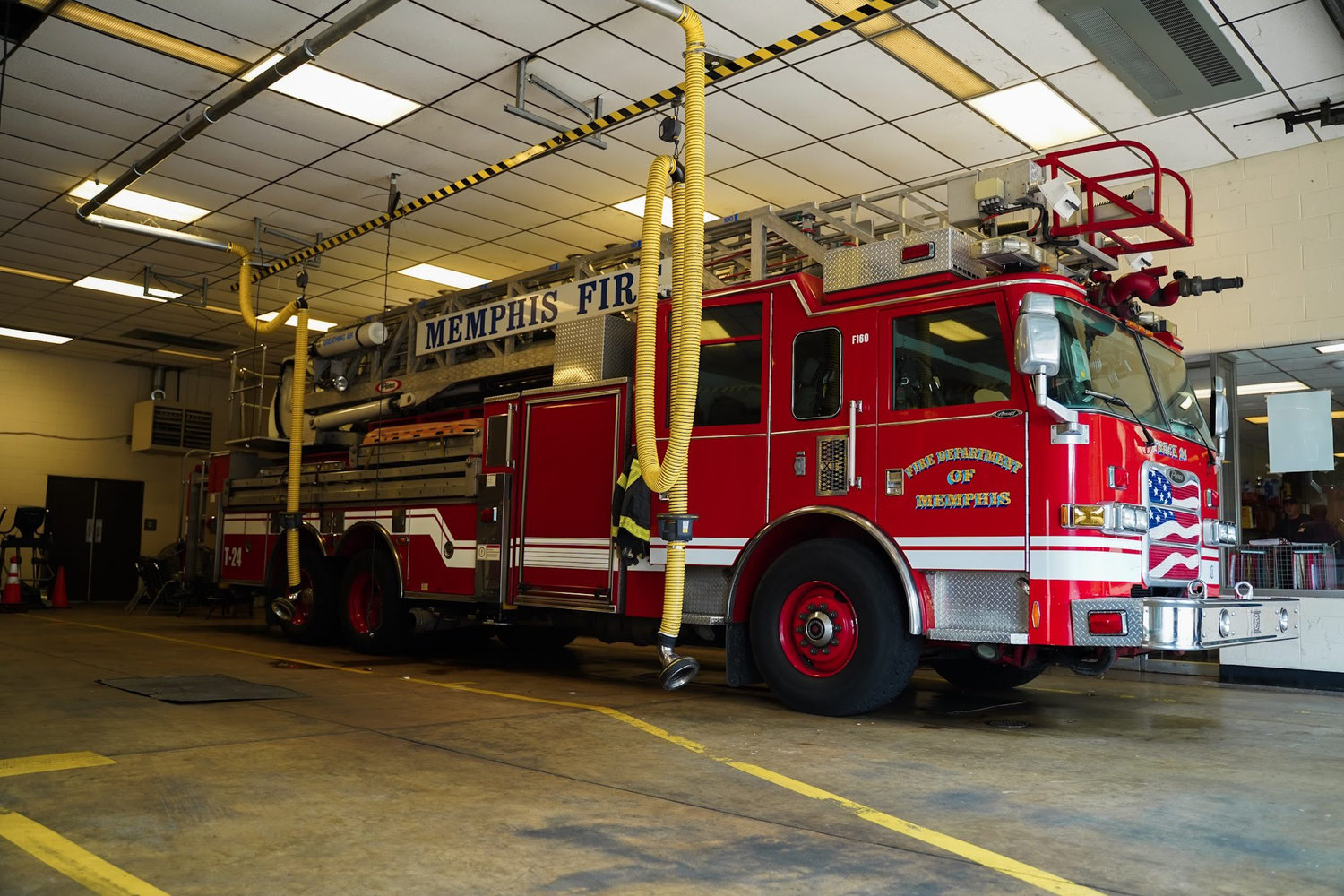 The C-shift, usually eight people in-house and two out on the ambulance, gathers around the lunch table to eat together before napping in the afternoon. Nothing fancy—a few rectangular folding tables pushed into a T-shape and surrounded by rolling desk chairs.

They pass around a pepper mill for bowls of beans and rice topped with coleslaw, the traditional fireman’s lunch. Served with cornbread, it’s cheap, easy and can be put on hold if a call comes in. The recipe has been around since before any of them can remember.

They cook on a rotation of the seven people who participate in a cooperative referred to in the firehouse world as “the syndicate.” Each person takes a turn shopping and preparing three eats on his designated day. There are three men named Michael and two rookies, plus two lieutenants who have worked 38’s for over a decade. Each man goes by his last name or a nickname usually related to food. 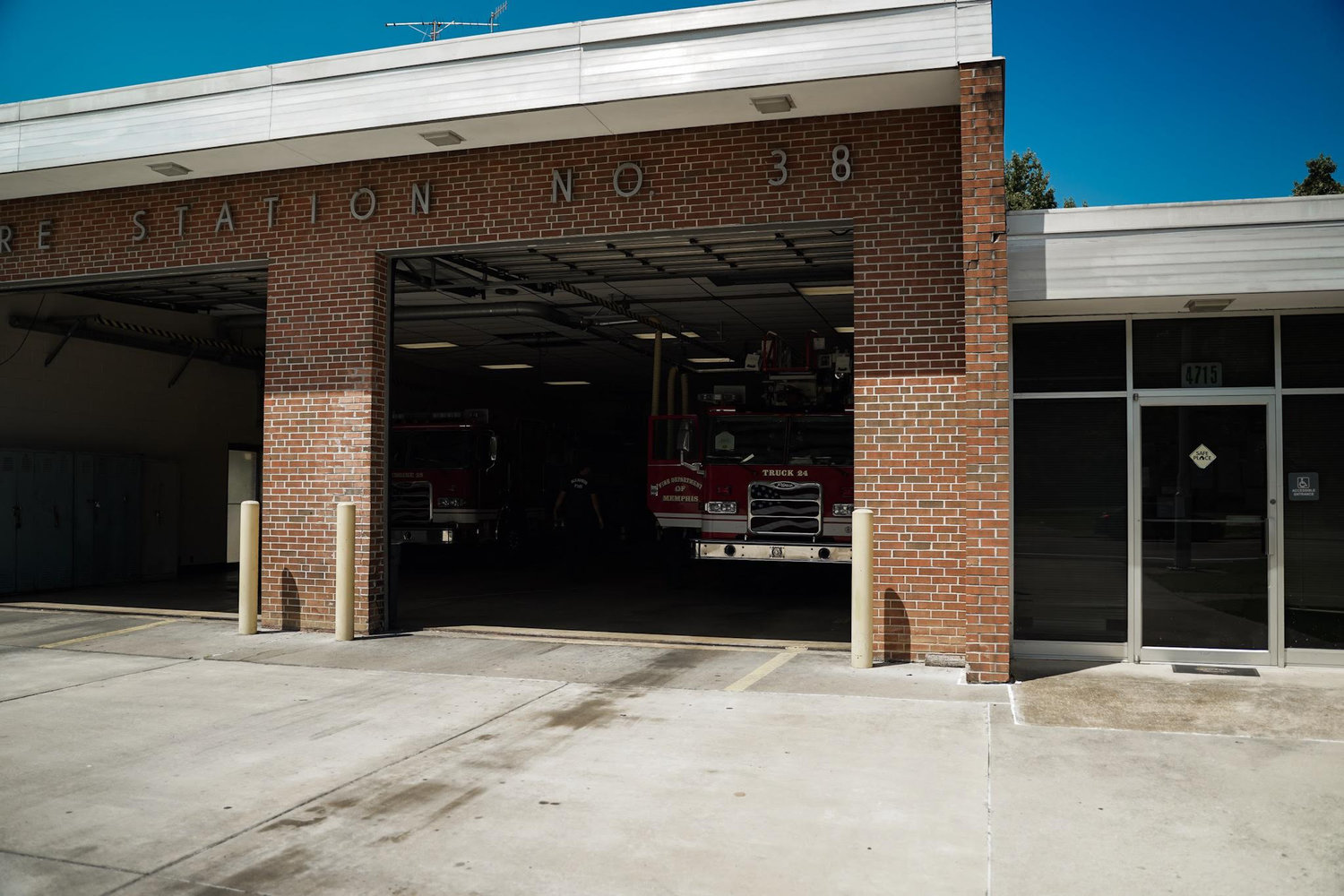 “I’m Cookie, he’s Mo’ Meat, and there was a guy named Half-Cake. It’s exactly what you’re thinking. But he’s not here anymore,” says firefighter paramedic John Ferraro, who is also a classically trained chef but was dubbed “Cookie” before anyone knew.

“It’s tradition to bring something on your first day, a way to meet everybody. 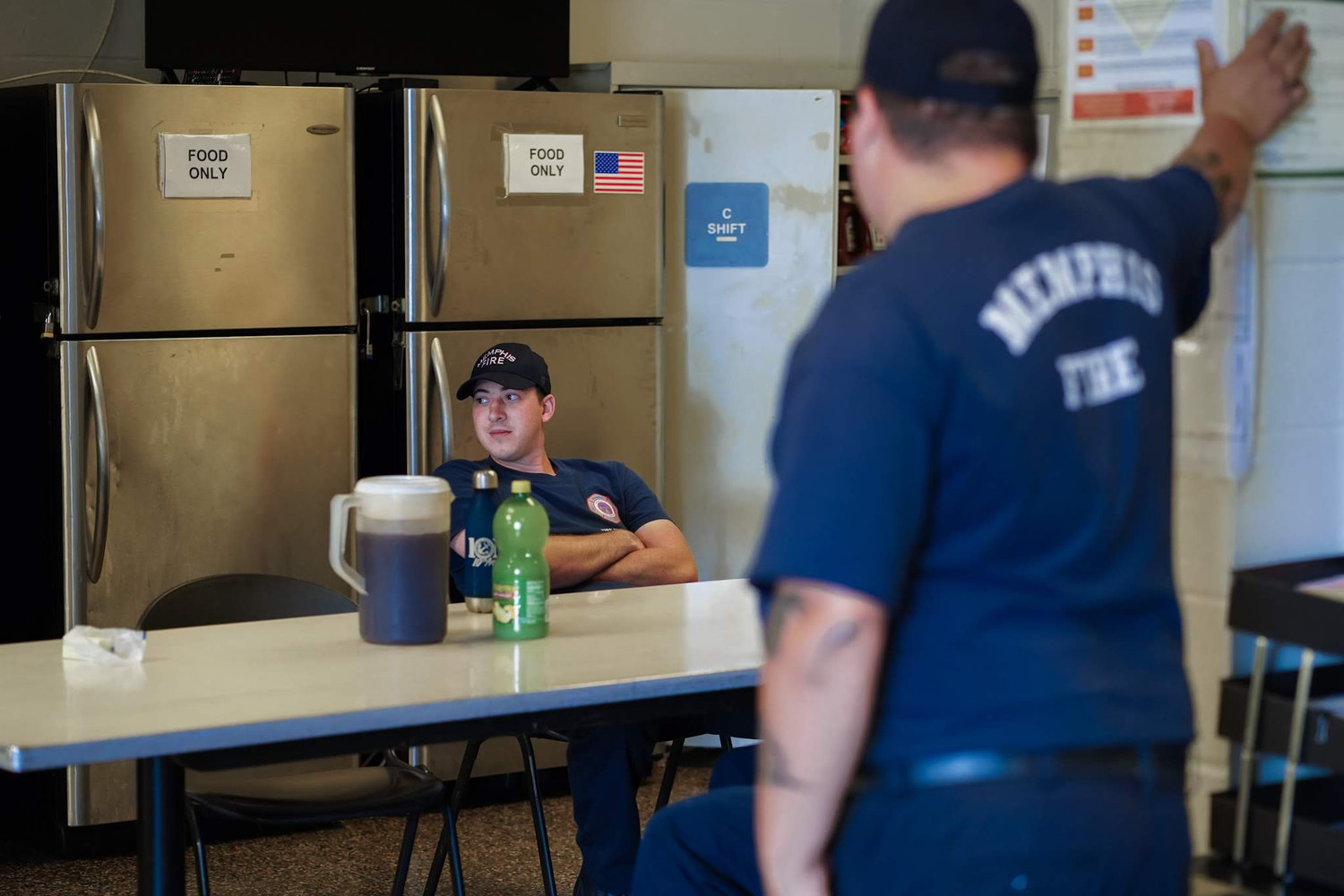 I baked chocolate chip cookies from scratch and brought them in still warm. That was six years ago,” he said. He did a clean sweep of the kitchen when he transferred in and revived the syndicate, which had fizzled out. He cleared out the iodized salt, tubs of Country Crock and canisters of pepper. He brought in butter, kosher salt and a pepper mill. He taught everyone who wanted to learn how to use a proper chef’s knife.

“There are other traditions too,” says Scott Verret, a lieutenant on the pumper, who’s from the swamplands south of New Orleans and as Cajun as they come. “Like if you work on your birthday, you have to bring in cake for everybody else. Ice cream if you work overtime. And for promotion, you have to bring steaks.” He glances at Cookie, who recently passed the test for driver. 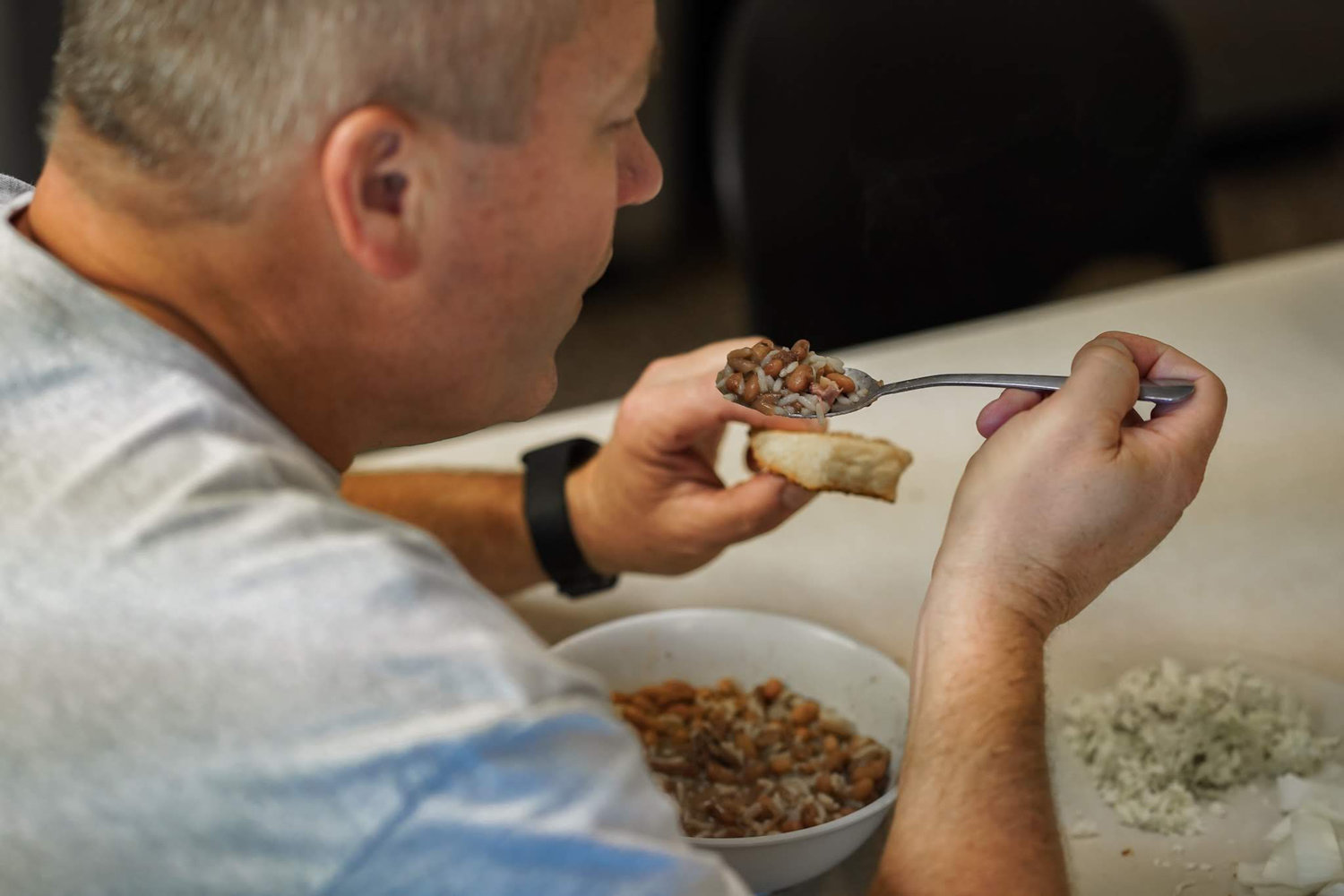 After finishing his beans and rice, Verret gets a text from his crawfish guy at Porter Seafood. Then loud tones radiate throughout the station, followed by distress details and location. Everyone stops eating. They move into action.

The turnout room is hot and thick with the smell of smoke, but the bunk room stays cool and quiet with blacked-out windows. Just outside the bunk room’s back wall is a garden. With seeds saved from last year’s harvest, driver Michael “Mo’ Meat” Leverett plants rows of sweet corn, cucumbers, squash and zucchini. On the side where they wash the truck, peppers from red ghost to jalapeño grow hearty. Ironically, when it’s time for second servings during meals, Leverett always asks for more meat. He has 25 years on the job and says food plays a significant part in performance.

“If you’re not nourished, you won’t have the energy to do the job you’re trained to do,” he says as he drops seeds in loose dirt tilled by a rookie.

“Used to be, firefighters were known for the brawn, lifting and hefting. You never know if you’ve got to drag somebody out, or if you’re going to get in a hot situation. We have to be ready.”

At 25 years old, Michael “Gecko” Goecking is the youngest, not far behind Tom Brown. They both are firefighter paramedics from Illinois and have been at 38’s for about five months. Neither has ever tried crawfish. 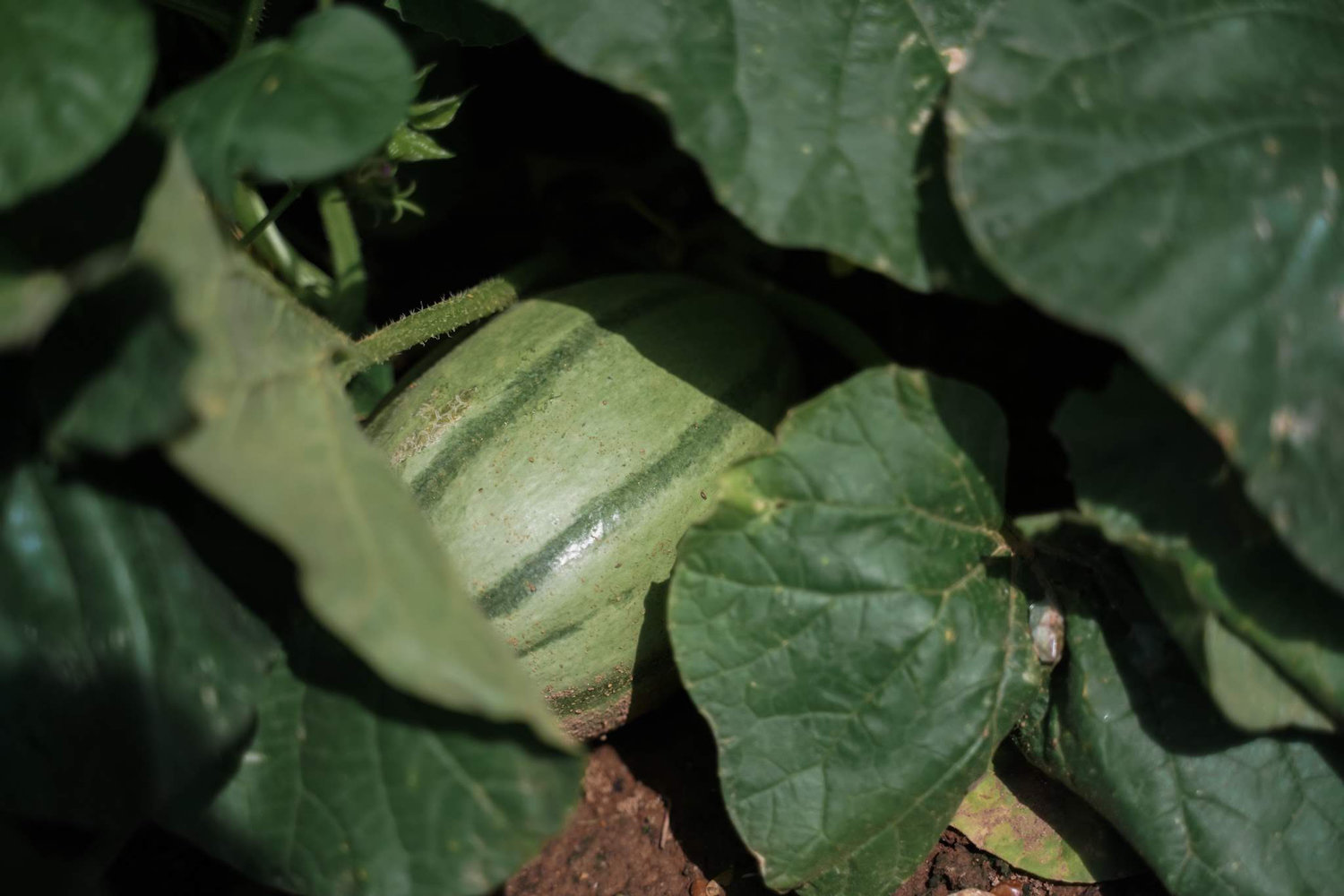 Two days later, Verret pulls a purple bag from a cooler, dumps the ice and pours in five pounds of crawfish. Private Michael Travis takes a water hose to the tiny legs coming to life. He’s the prankster with a father and three uncles retired from Memphis Fire Department. 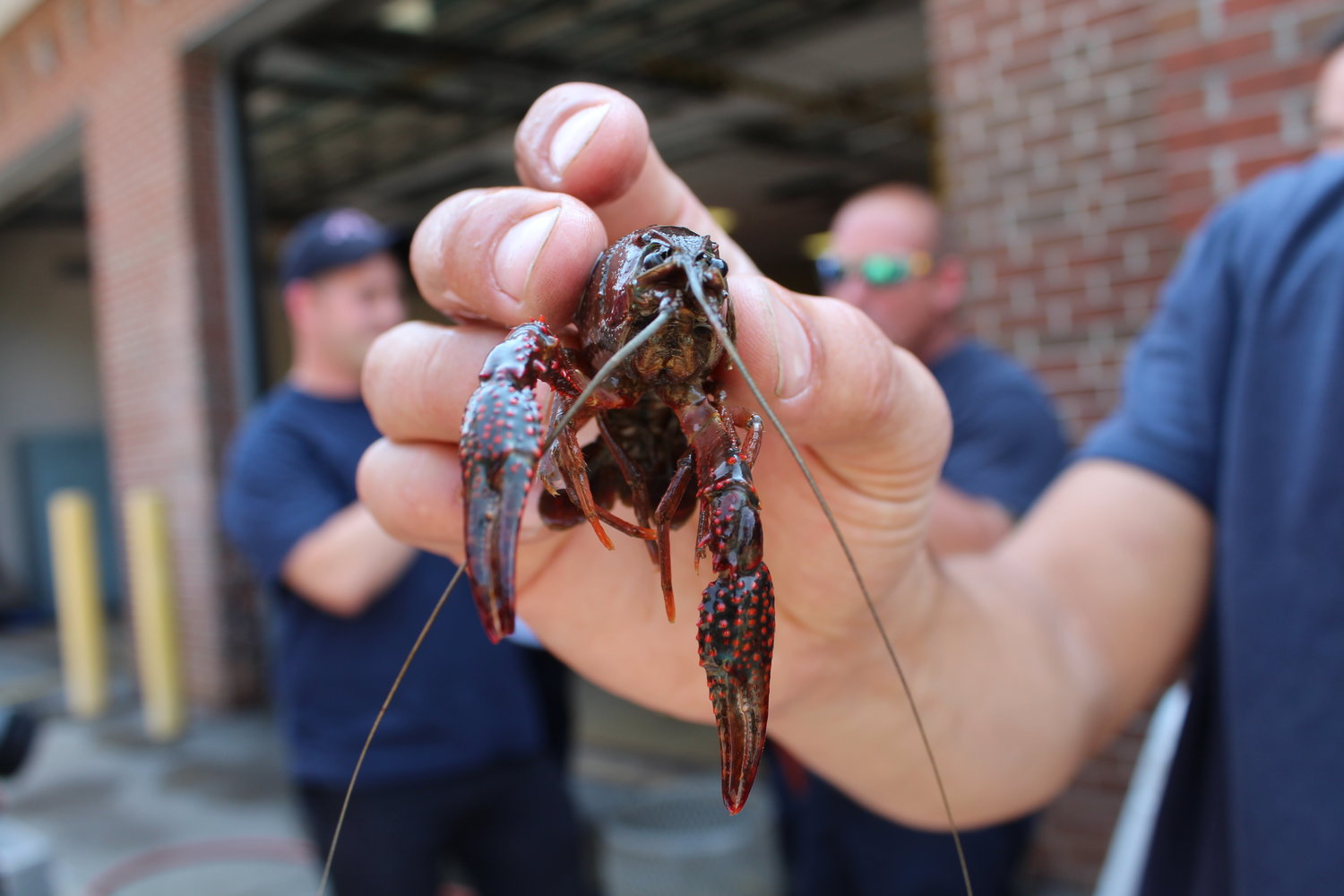 The rookies pluck out the dead ones. Long makes the remoulade. Cookie shucks the corn. Verret stirs with a wooden paddle and drops in a small basket for Mo’ Meat, who prefers shrimp. Travis brings a live crawfish toward puckered lips, and it latches on.

Over the afternoon, they respond to three emergencies, alternating between the truck and pumper. When everything is ready, they feast over a line of bus tubs and watch the rookies’ reactions to their first crawfish. Then the chief stops by. He has noticed syndicates in decline with the rise of dietary restrictions and food delivery apps.

“A unit that eats together is a unified company,” says Jeff Patterson, a battalion chief who oversees six stations.

“You can tell. They work well together. And there aren’t as many of those as there used to be, sorry to say.”

With the leftover crawfish, Verret plans to serve Acadian sauce, a Cajun specialty, with crappie caught by Long, who still won’t say where. For Ferraro’s last day at 38’s, he’s contemplating ribeyes. Promoted to driver at Station 31 in Frayser, he says, “I feel like I have to bring cookies.”

Candice Baxter writes on homegrown food and raising independent kids. Her work is featured in the Memphis Flyer, Memphis Parent and others. Currently completing her first full-length manuscript, she chronicles the road to publication and midday meals with a mentor at So Lit Lunch on candicebaxter.com. @cbaxsquared

From Childhood Dreams to a Retiree's Reality

A Day (or Two) in Oxford