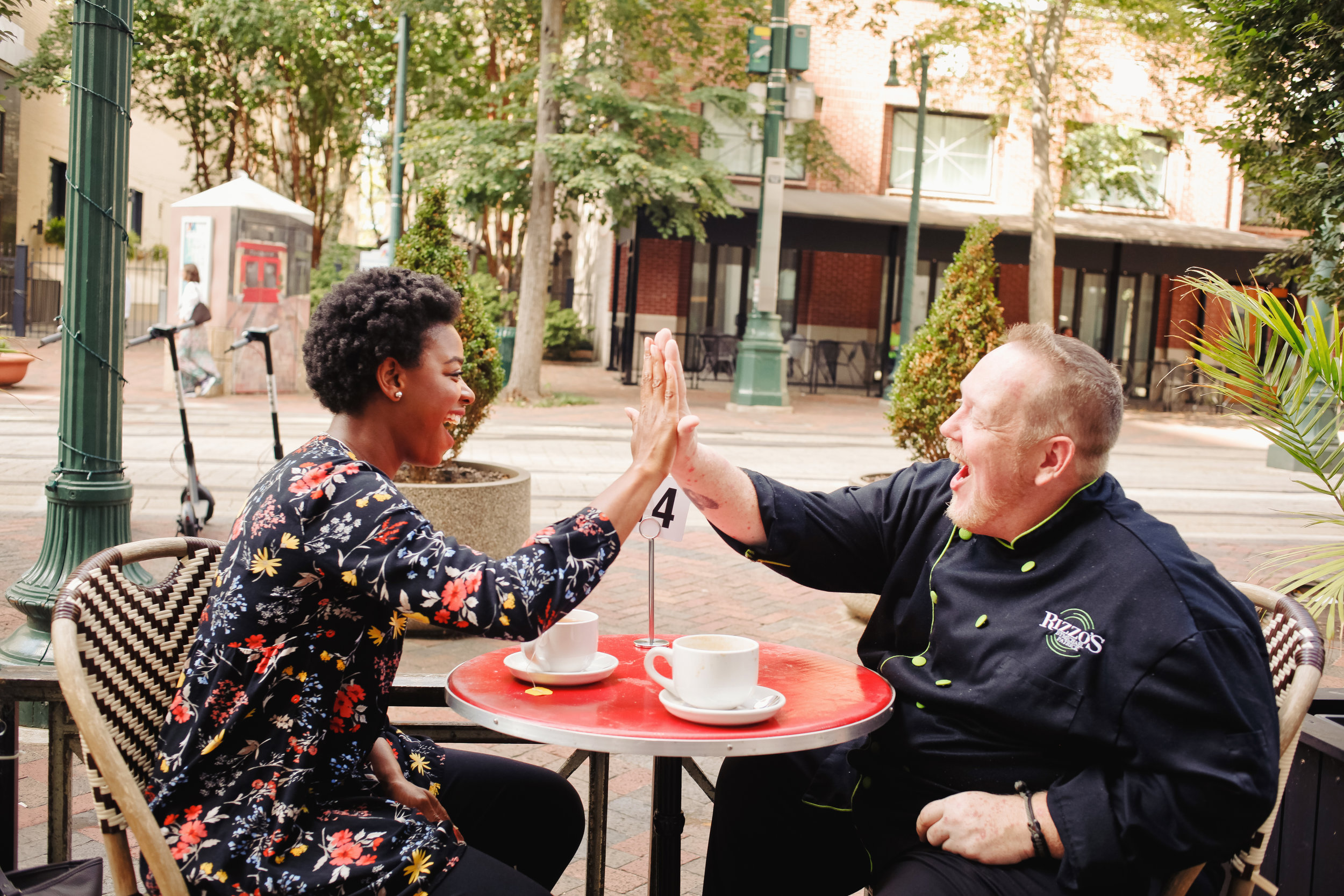 “Memphis isn’t so much a barbecue town as it is a food destination.”

The perspective rings true as it’s spoken in unison by two trusted voices of Memphis’s dining scene—Chef Michael Patrick and Cristina McCarter. Their friendship, a byproduct of such shared passion, has fueled new outlets for both locals and tourists while fortifying the South Main footprint.

On any weekday, you’ll likely find Cristina and Michael standing at the back corner of Rizzo’s bar. Two of downtown’s most authentic storytellers, they plan, scheme and share feedback from their varied yet now vitally interconnected backgrounds. 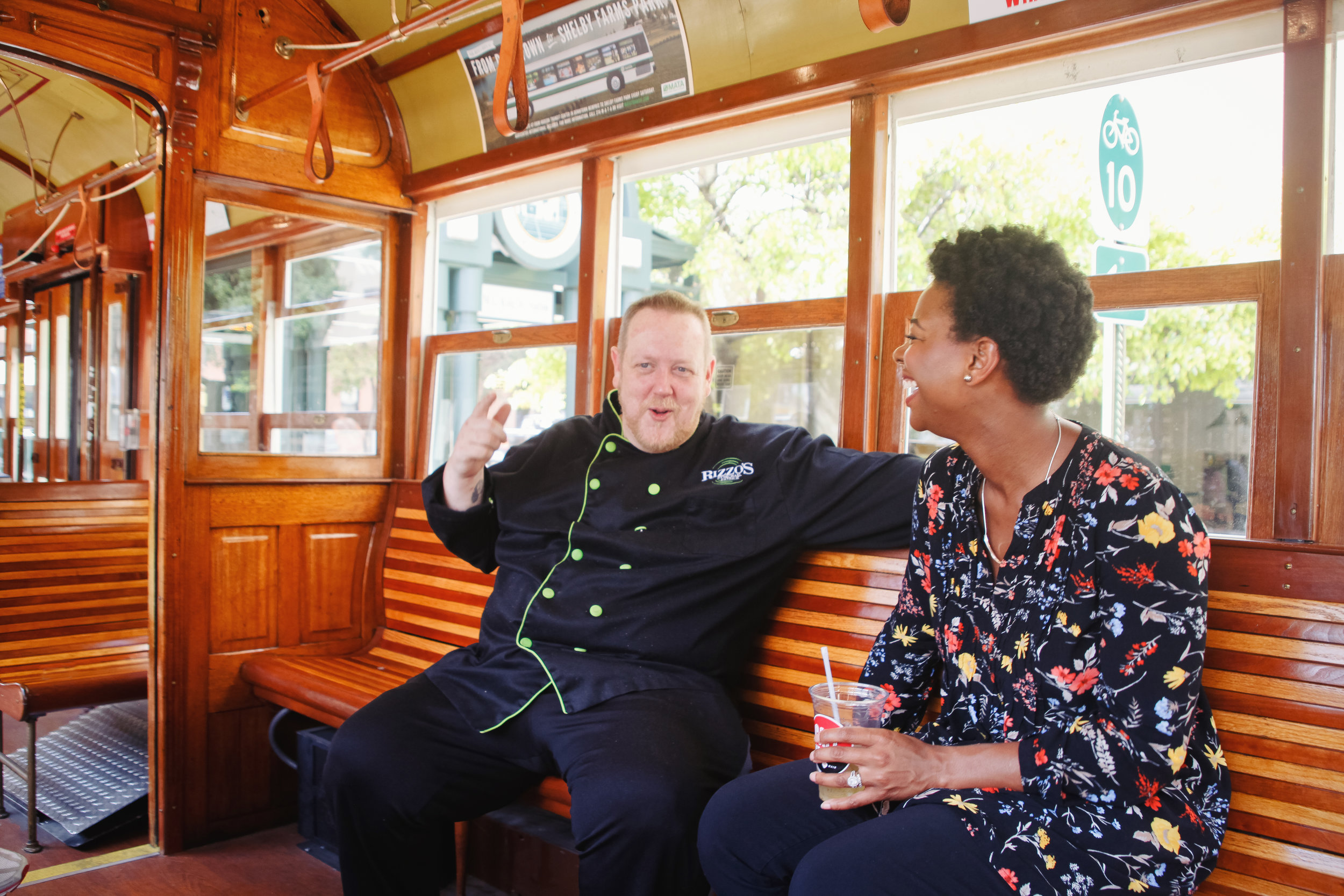 Chef Michael Patrick opened his signature restaurant Rizzo’s in 2001 on G.E. Patterson Street in the South Main neighborhood of downtown Memphis. At the time, only Earnestine & Hazel’s and the Arcade Restaurant were open at the intersection. Yet over the course of six years on the street, Michael saw “glimmers of change and a concentrated effort on the area.”

With financial support and counsel from the Downtown Memphis Commission (DMC), Rizzo’s not only stayed in the neighborhood but moved to a prime location on South Main adjacent to the National Civil Rights Museum. Rizzo’s still stands strong today on that corner, lending opportunities to further blend Michael’s passion for the neighborhood with his menu’s elevated Southern soul food. 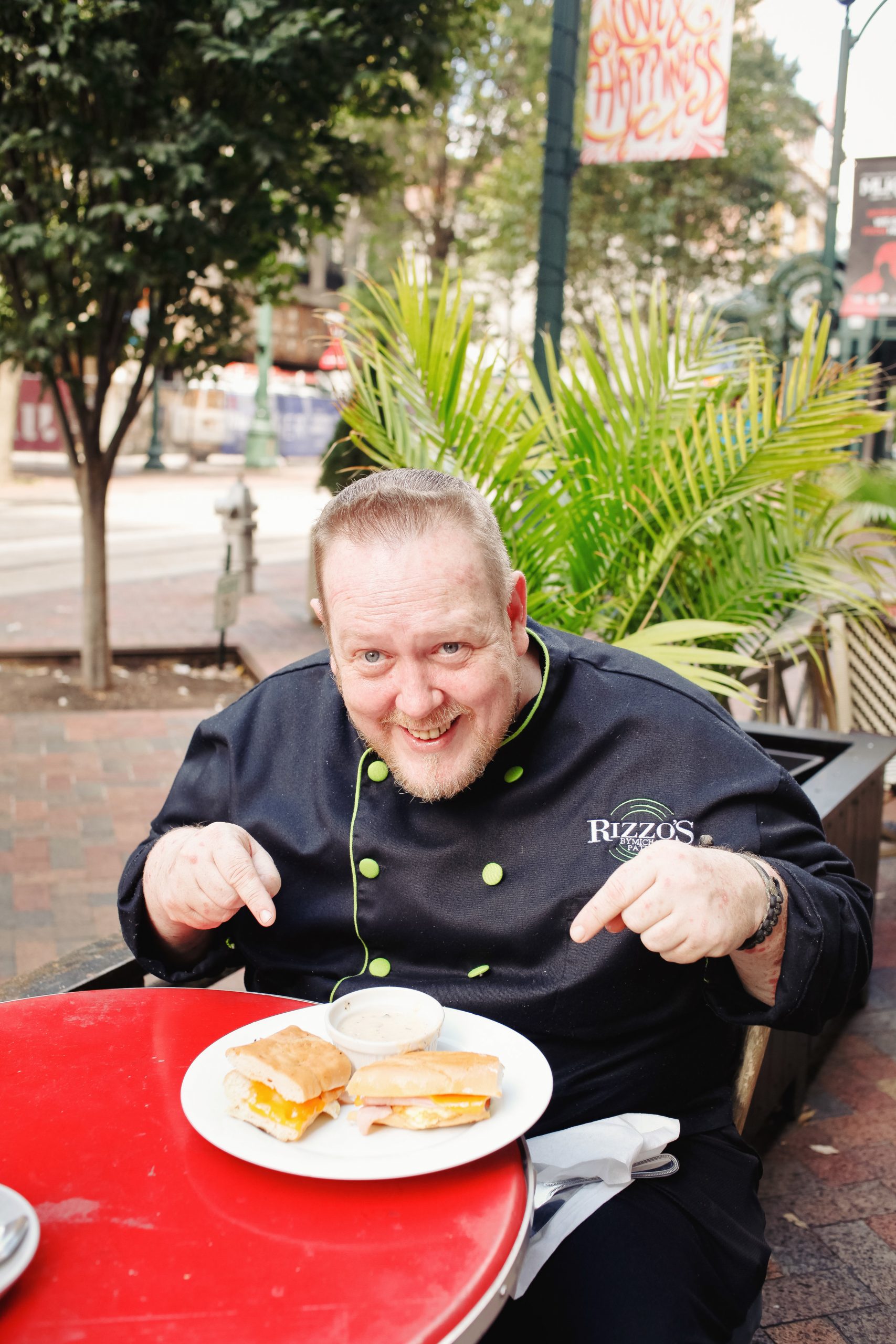 “There is so much history in South Main area—it was the black business district in the 1920s, a music hub, a clear centerpiece in the Civil Rights Movement—

and even your common Memphian doesn’t know the full story,” said Michael. “To share that rundown is a great part of my job.” 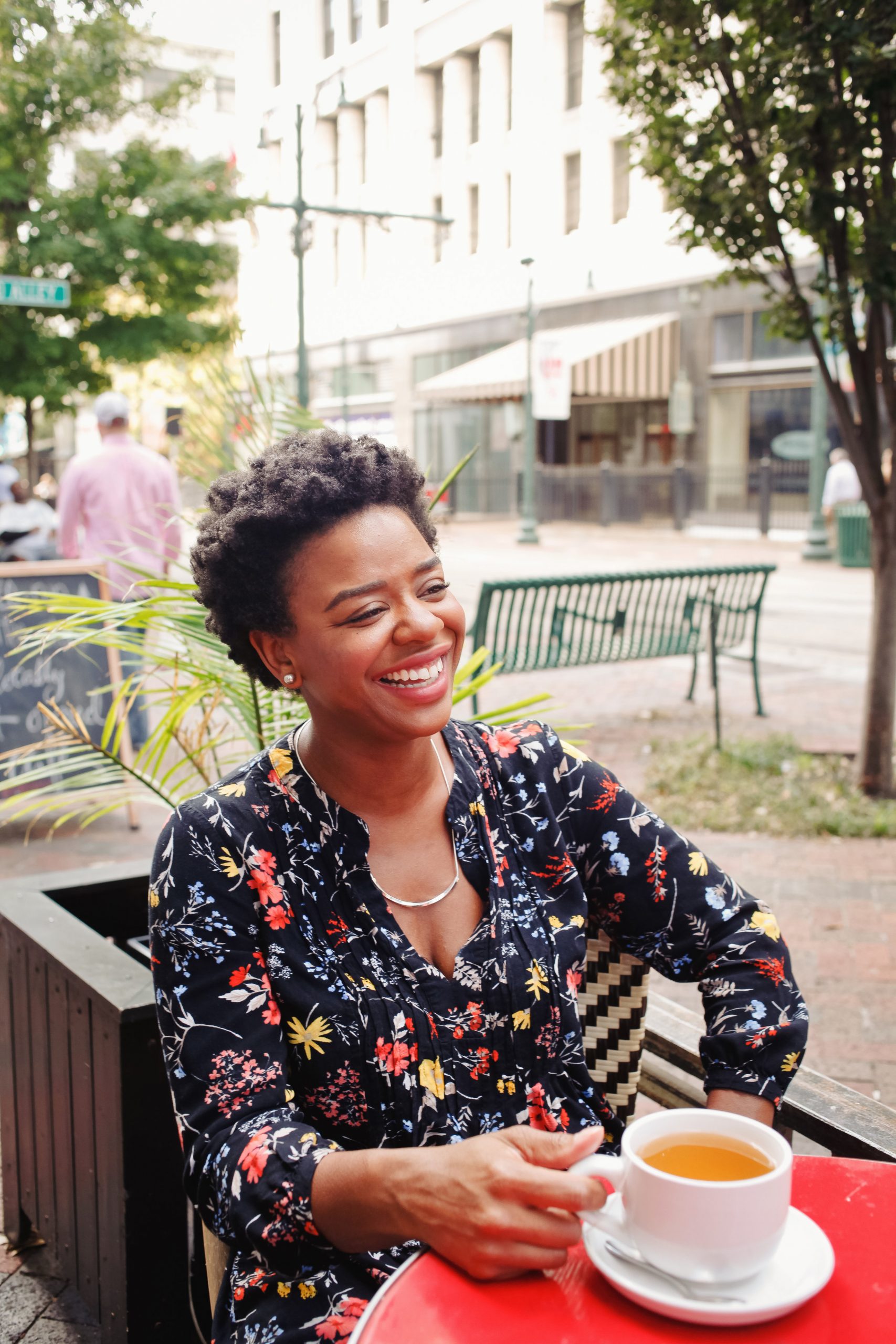 Meanwhile, native Memphian Cristina McCarter sought an opportunity to share Memphis’s story in a complementary light. Cristina’s entrepreneurial spirit pushed her to co-found and own a food tour business based in downtown Memphis almost three years ago. City Tasting Tours has grown into a series of dynamic food-meets-history walking tours. During the typical half-mile route, locals and tourists sample cuisine from three to five local restaurants and learn more about the chefs, food and city along the way.

“In the very beginning, I only had barbecue signed on. Rizzo’s was the first non-barbecue,” said Cristina. “I hadn’t known Michael personally at that point, but he was so supportive, allowing me to share his commitment to recruit other non-barbecue spots.” 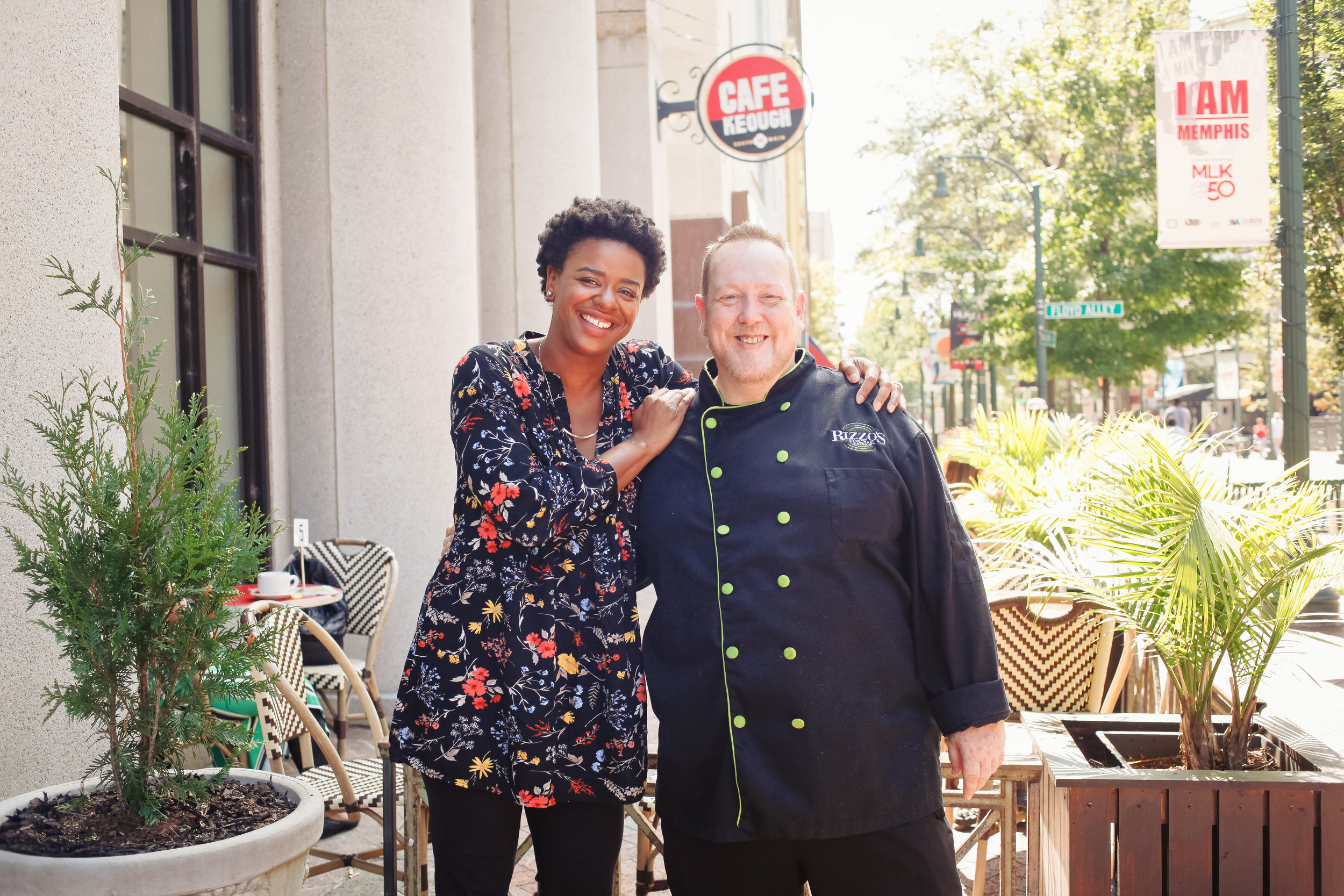 Michael remembers their first formal introduction, during which Cristina shared her idea for a food tasting tour and asked for his interest.

“I said, ‘Break it down and send it over,’” said Michael. “And she proceeded, coming back by the restaurant two more times, setting up dates.”

“Her drive impressed me.” 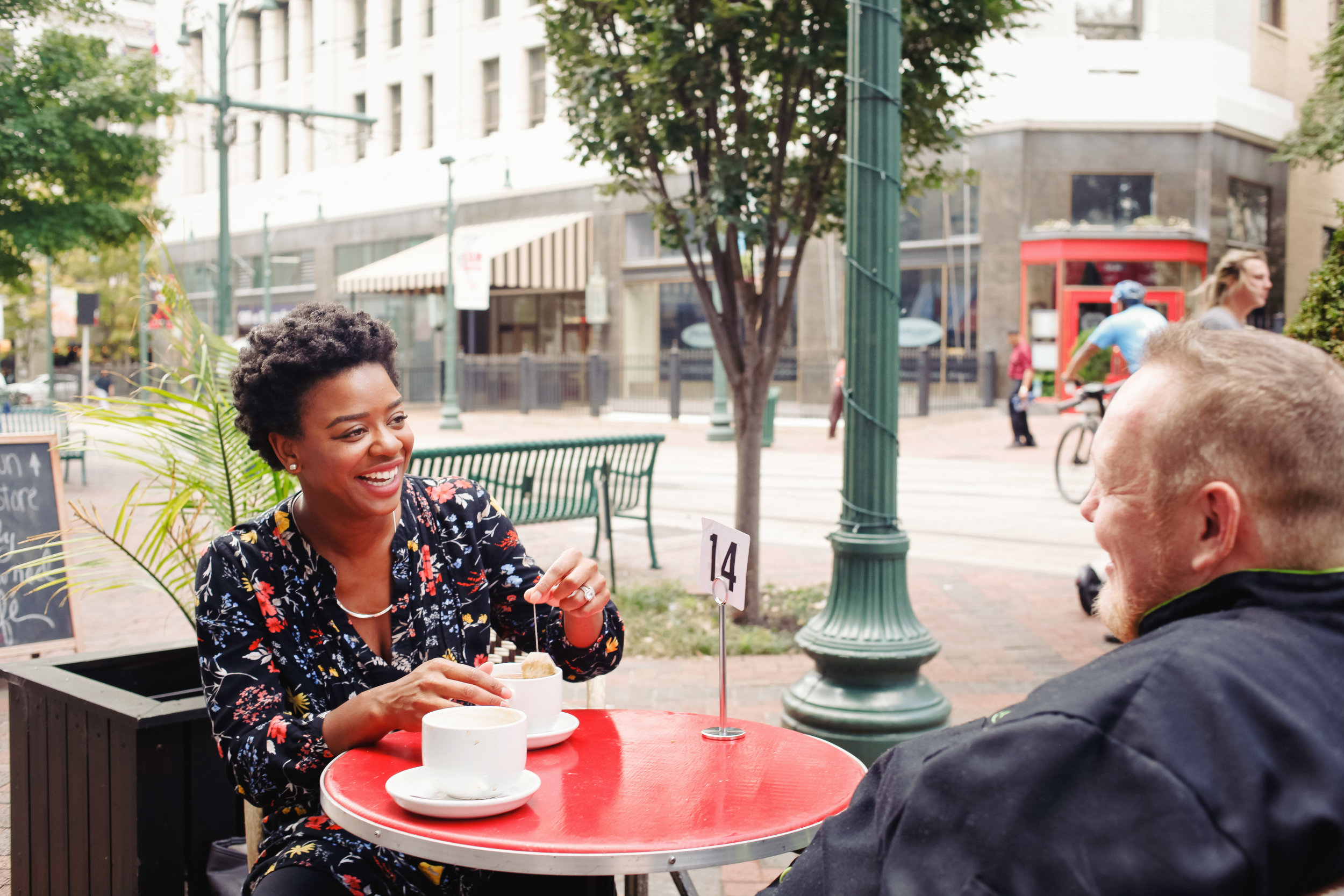 “I had eaten at Rizzo’s before and don’t think he realized how much I loved his food,” Cristina laughed. 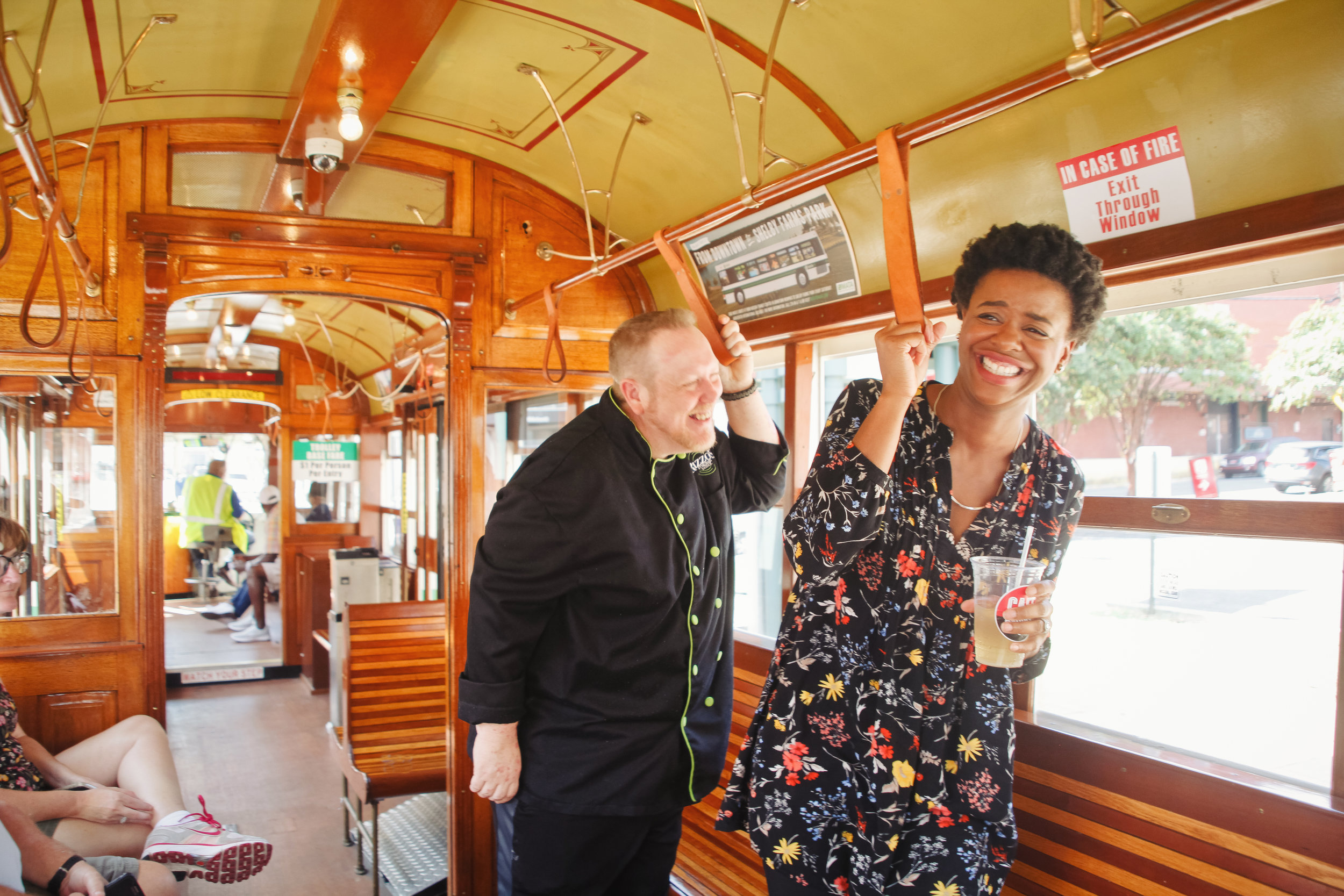 “We came in [at the G.E. Patterson location] for the first time to celebrate my mom’s birthday, and he was so nice. Now he and my mom are friends too.”

“When someone tells you they love your food, you’re endeared to them!” Michael said.

Since that initial agreement between Rizzo’s and City Tasting Tours, hundreds of tourists have stopped in for a sample of Michael’s menu, such as his lobster pronto pup or blackened catfish eggs Benedict brunch feature. 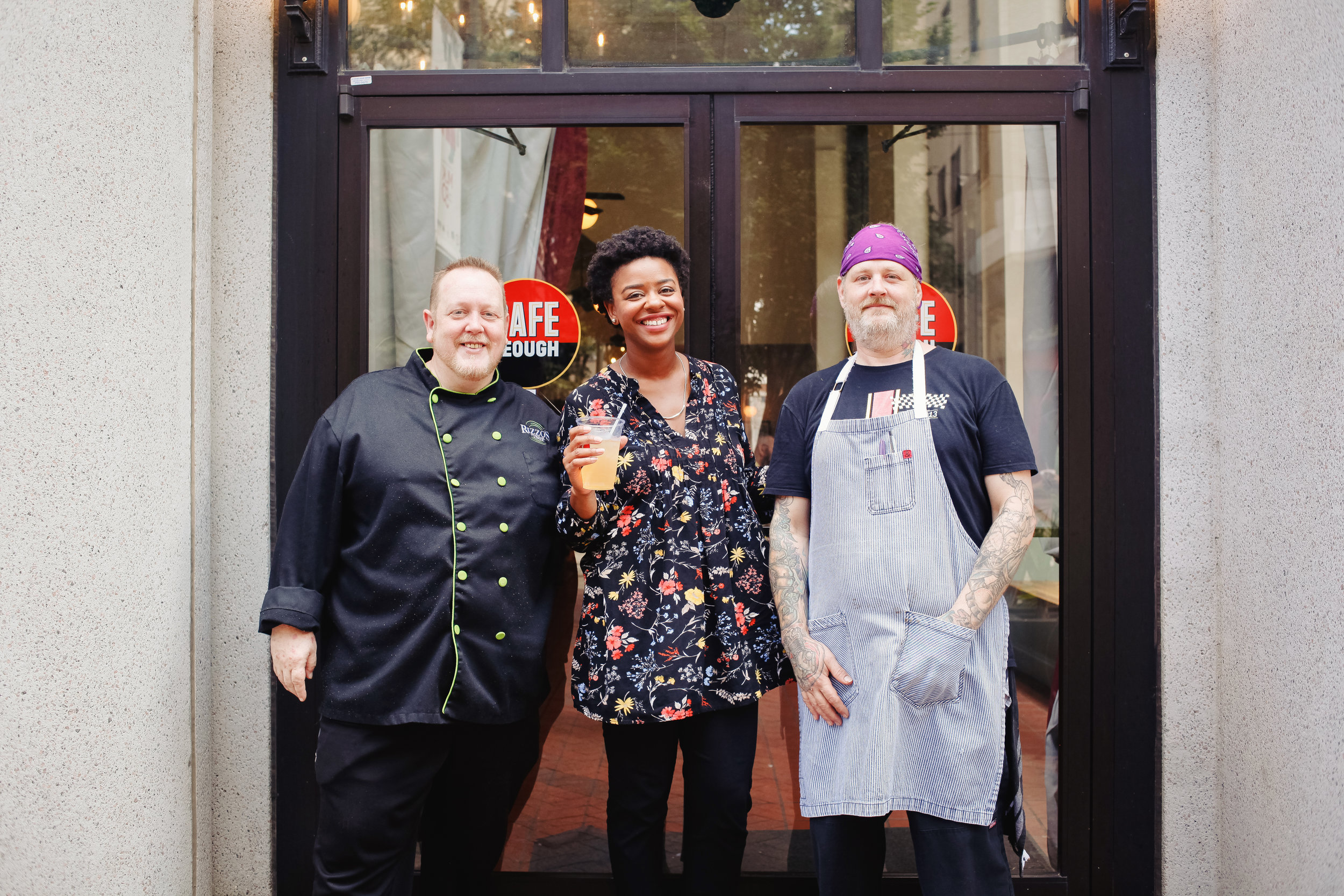 “Cristina has proven that the footprint is there—people know they’re coming to Memphis, and they book her tour months or weeks in advance,” said Michael. “She’ll tell me I have 20 people coming two weeks out. Then, after the tours, I see familiar faces return Sunday morning for brunch. She added thousands to my bottom line last year. But even more, with her word of mouth referral—you can’t put a price tag on that.”

Their relationship was strengthened last year at Rizzo’s during Downtown Dining Week. A typical 40-cover lunch shift had grown to 140 covers, and Michael learned last-minute he was one man down. Cristina jumped in at 10:30 that morning without hesitating, dishwashing in the kitchen during one of its busiest weekdays of the calendar year.

“I really care about my restaurants!” said Cristina. “When I come in and do the tour, I’m basically asking him to stop what he’s doing and help me and my clients for 20 minutes. That’s respect.”

“There’s trust in there. We have each other’s back.” 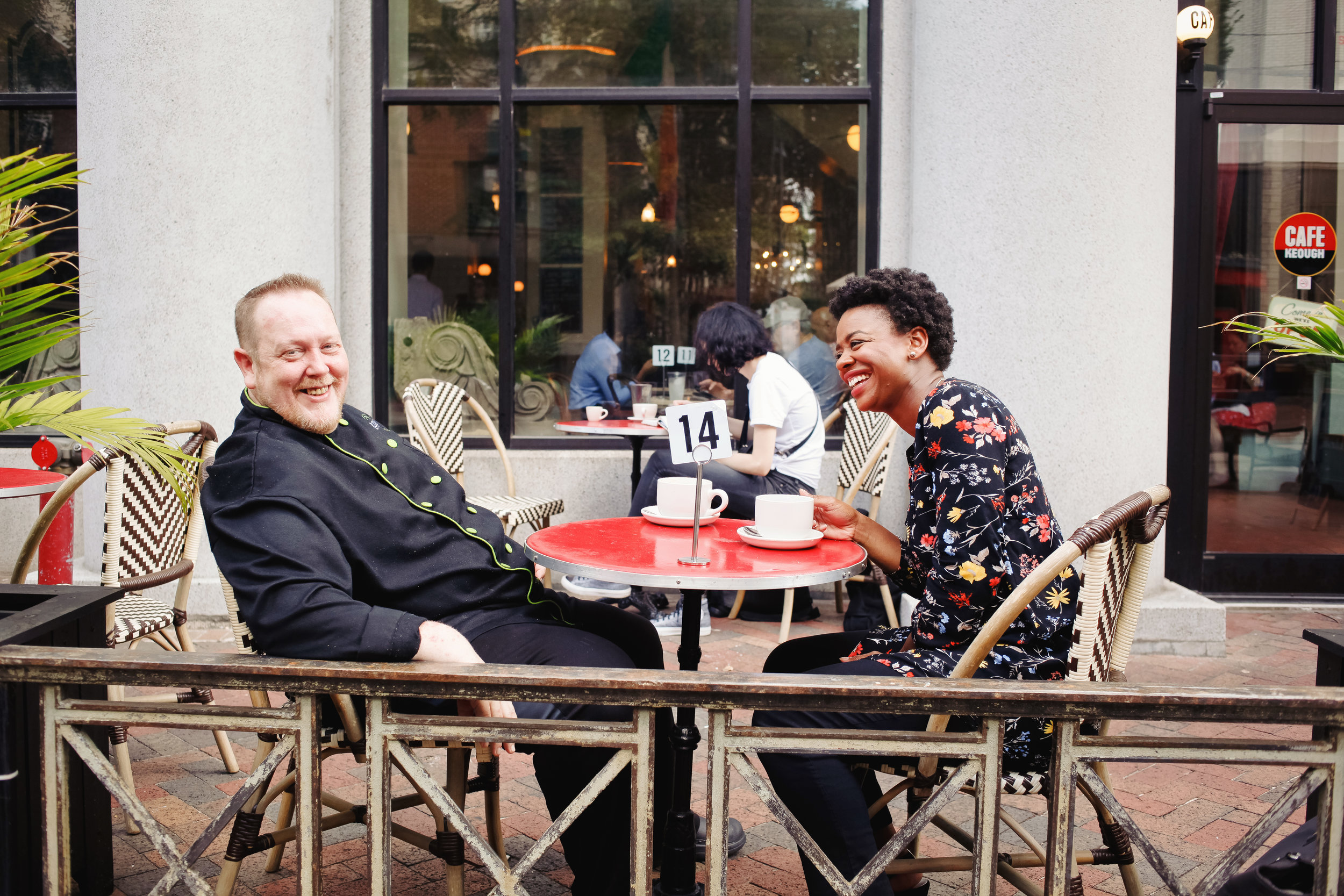 “When she offered to step in that day, my respect for her grew that much more,” Michael said.

The two are self-declared ambassadors for downtown.

“Cristina’s guests and my diners will see landmarks and sense the excitement,” said Michael, “But the City and DMC have invested in a lot of this area, and we are both definitely seeing the return.”

Cristina added, “This area is a rich jewel, and we are really blessed to have this compared to other cities.”

Their friendship began with business; now the two find themselves talking about more than food—talks have grown into perspectives on owning a business, the opportunities across South Main and the city, civil rights and current events. Cristina calls Michael an “easy listener who’s able to talk about the tough stuff.”

Michael shared, “I know I have things to do, and she does too, but we always make time to talk.” 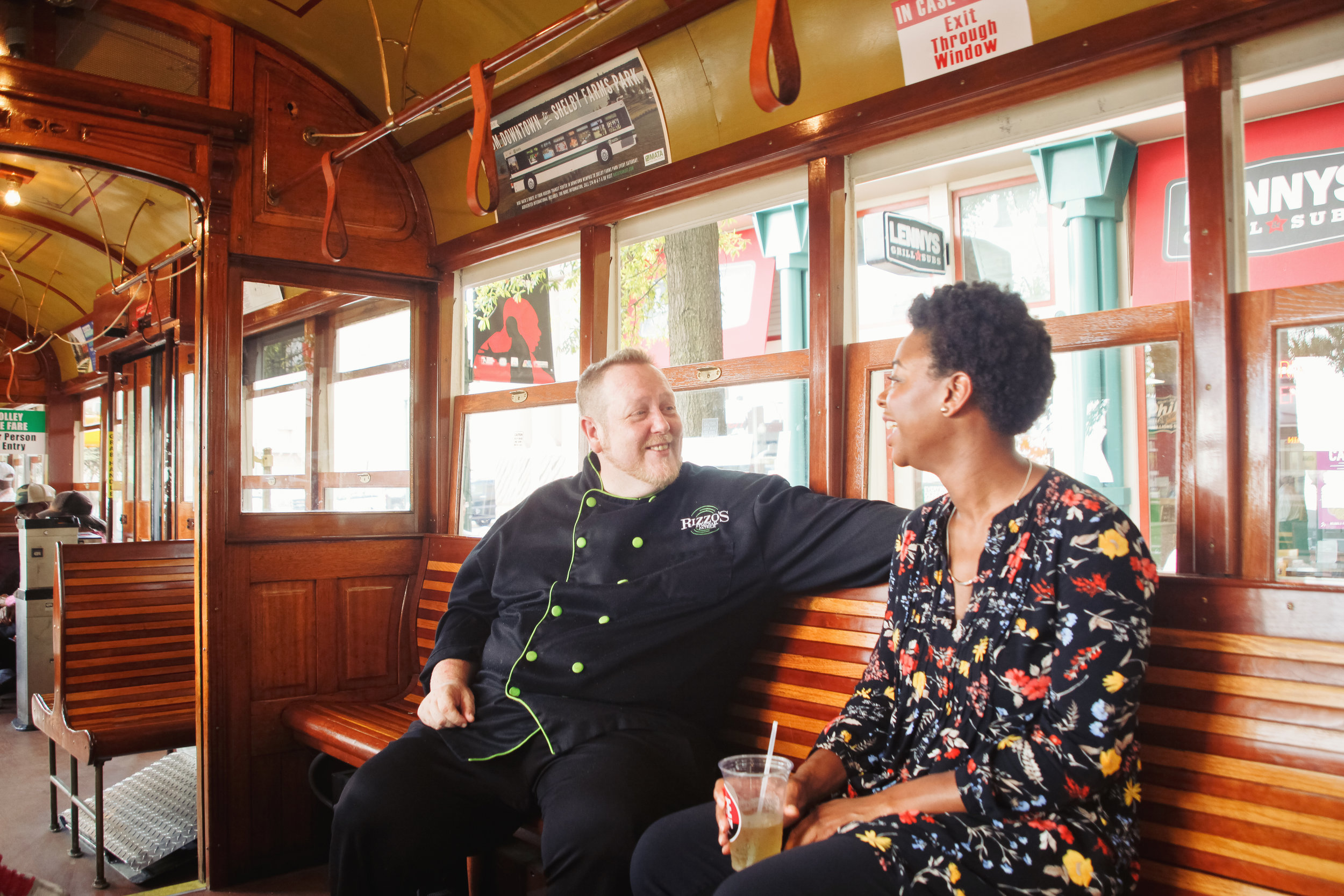 “There’s a different, beautiful kind of harmony with our backgrounds of white and black, male and female,” he continued.

“We have our riffs, and we can disagree, but that’s part of friendship.”

Cara Greenstein is founder and author of award-winning, Memphis-based food and lifestyle brand Caramelized. A bonafide foodie and entertaining expert, Cara offers a wealth of inspiration for the kitchen and home, as well as food and itinerary suggestions for outings in Memphis and beyond.

Kim Thomas is a lifestyle blogger and photographer based in Memphis. Launched in September 2010, her blog KP Fusion provides of-the-moment fashion, style and beauty tips and trends with a little Memphis flavor thrown in.

Weird Memphis Things to Put in Your Mouth

A Life of Beekeeping