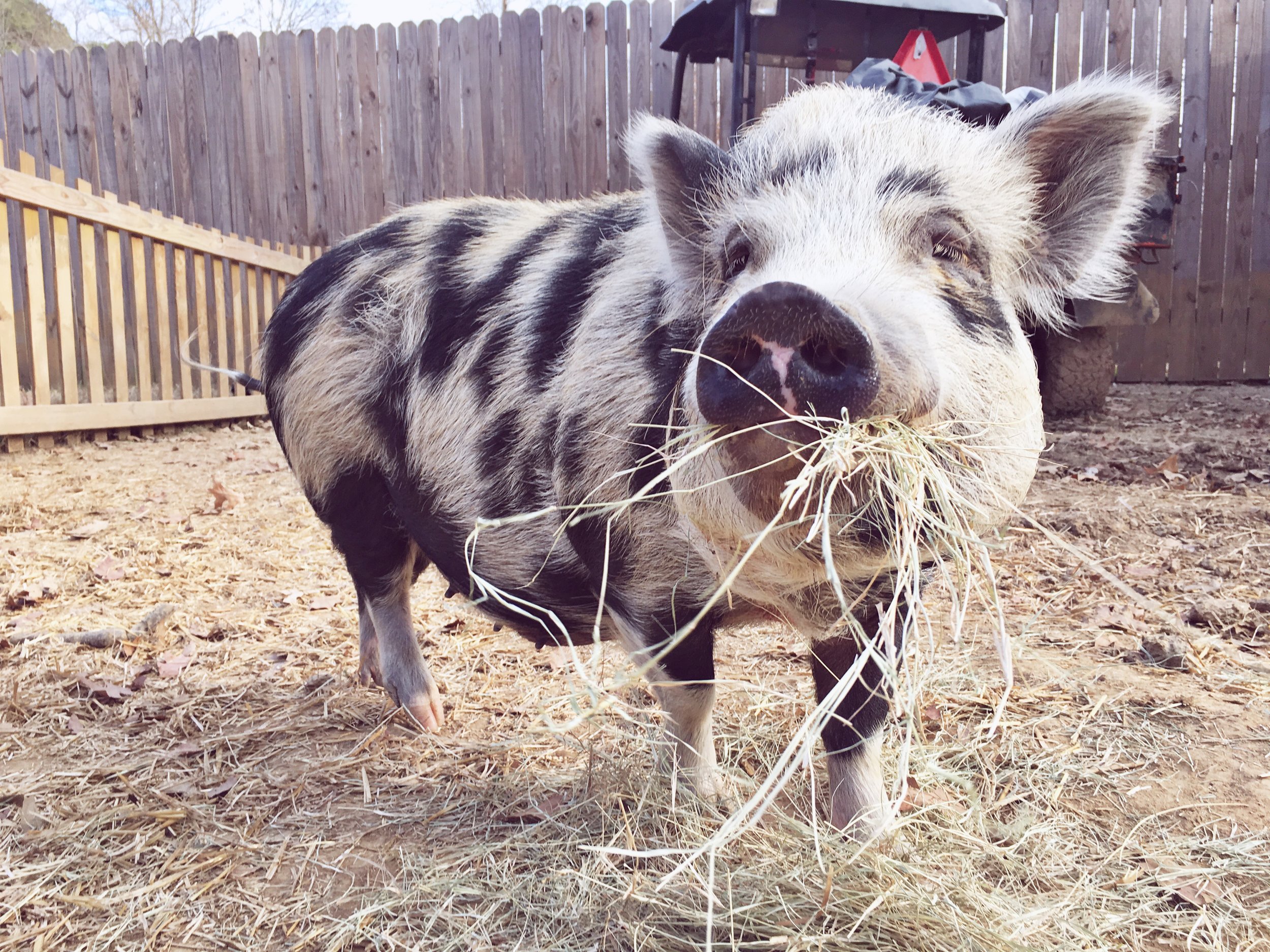 When Pigtopia pig sanctuary owner Anna Davis’s Millington home was lost to a flood in 2010, she built a new home in northern Shelby County with pigs in mind.

“I designed a big laundry room with a sink and concrete floors,” says Davis. “Pigs are always rubbing their nose in dirt and then on other things, so my baseboards will never be clean.”

Not all of the 25 rescued pigs at Pigtopia are allowed indoors, but Ellie—a clean, white pig who was Anna’s first rescue—prefers not to associate with the other pigs and doesn’t like to get dirty. On one particular day in early January, Ellie is sleeping on blankets behind a recliner in the living room. 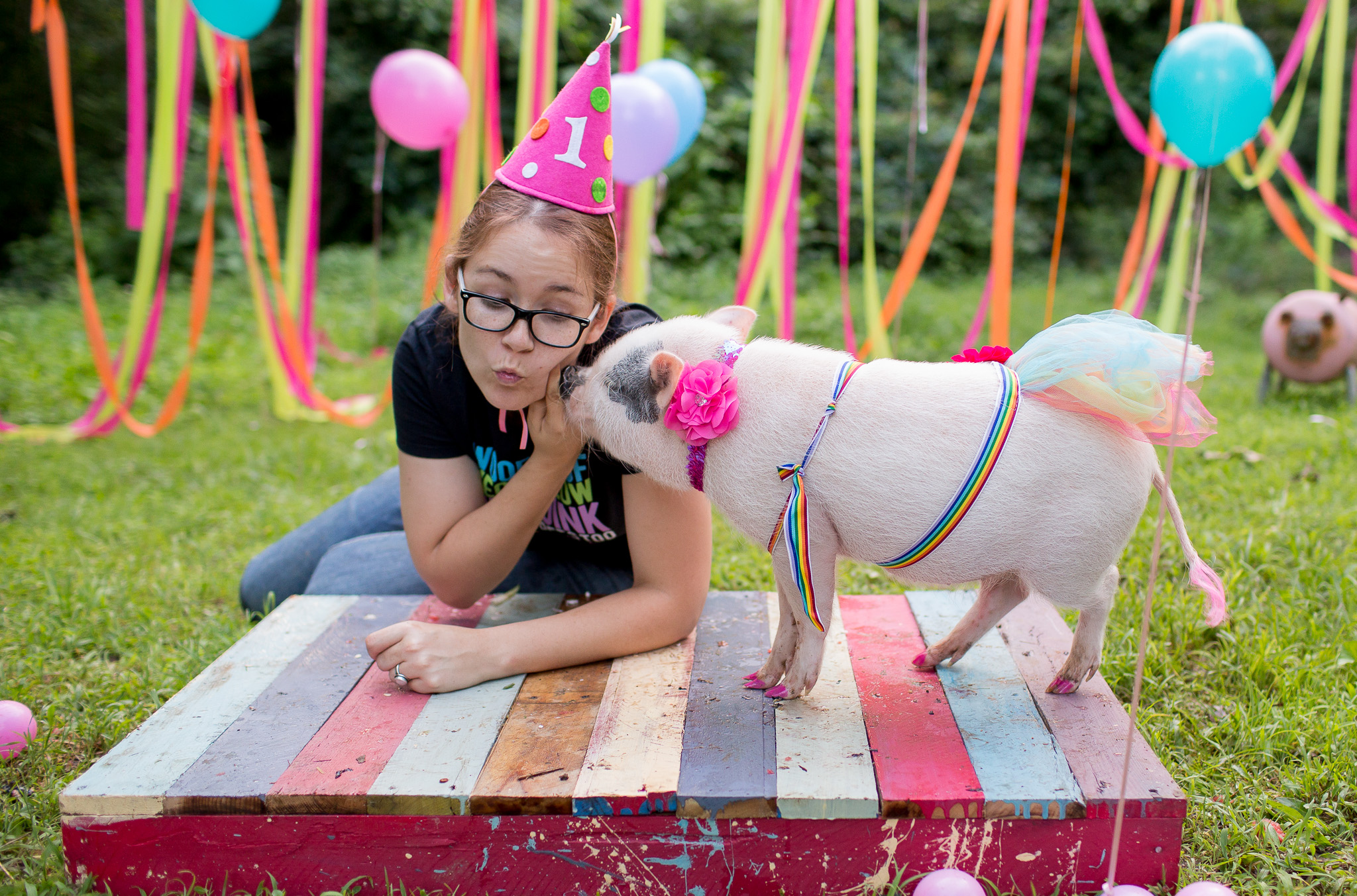 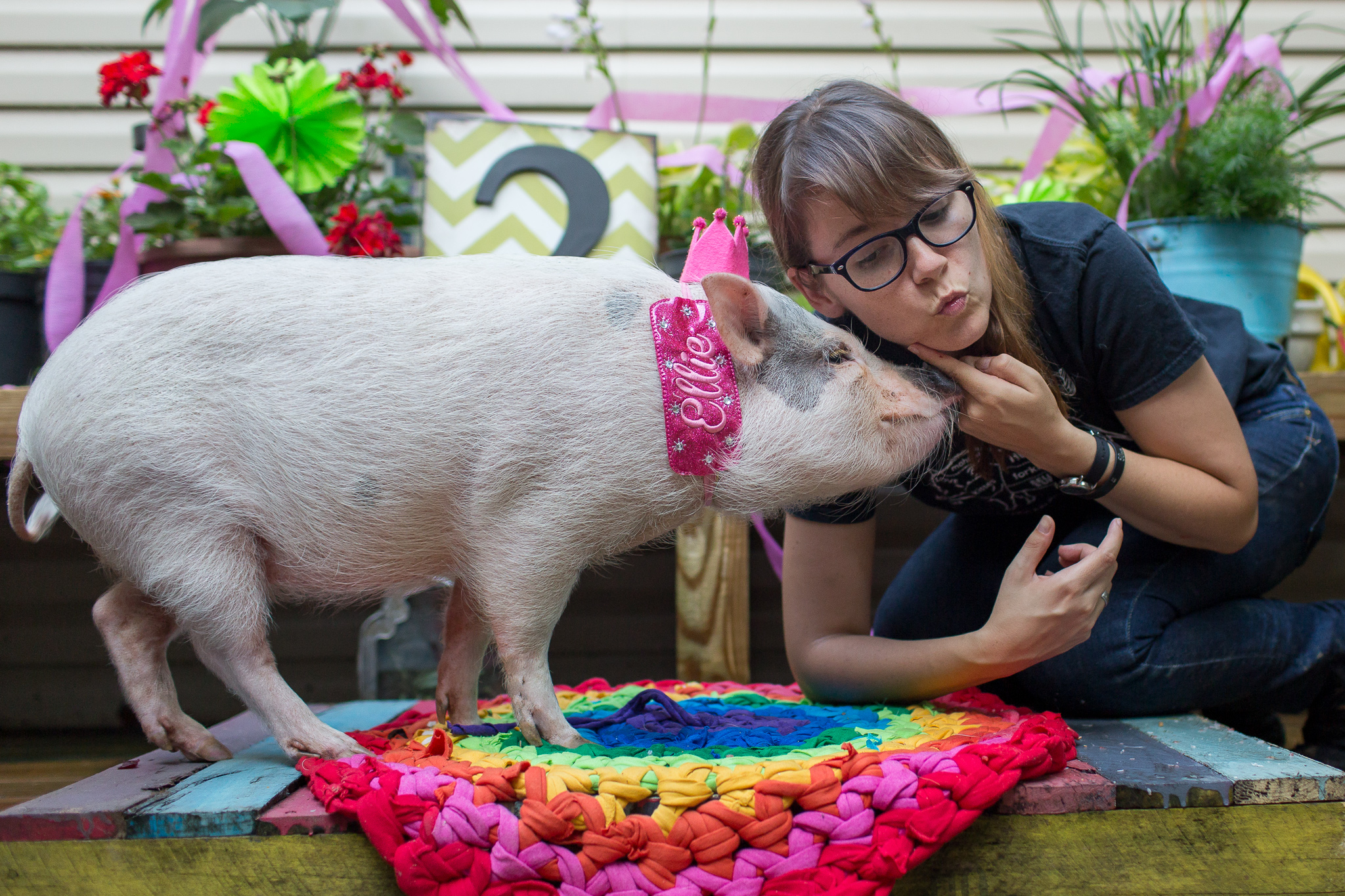 And then there’s Oliver, an older black pig with giant tusks that force his mouth into a permanent smile, who is sleeping in a large dog kennel in the living room while he recovers from a recent surgery. Panda, a spotted potbellied pig; and Reese’s Pieces, a tiny kunekune pig, are also allowed indoors. 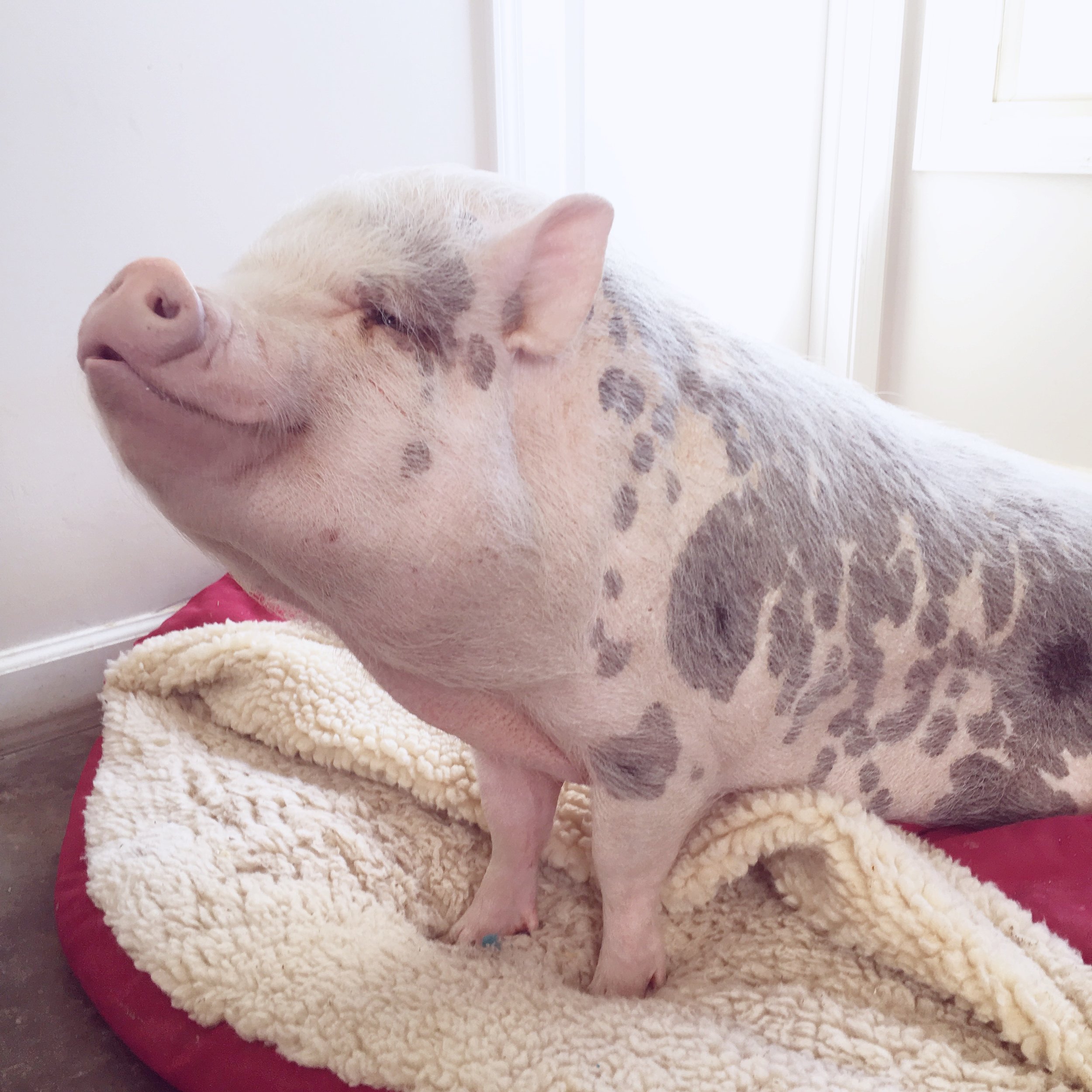 But the majority of Davis’s rescued pigs live out back in a large, muddy, fenced yard filled with holes, thanks to the pigs’ love of rooting for grub worms. Pigtopia, a 501(c)(3) nonprofit organization, is billed as a “happy, safe place for unwanted, abandoned and neglected pigs.”

The pigs who call Pigtopia home range from potbellies to large breeding pigs from farm operations.

Davis adopted Ellie in 2013, and a year later she took in Chub Chub, a black pig who’d been abandoned by her family in belly-deep (for a pig) snow outside of Kansas City, Missouri. Eventually, she took in a few more pigs, including Oliver, who were likely to be slaughtered after a stint as petting zoo pigs at the Mid-South Fair. Over time, her sanctuary grew to include the 25 pigs she has today.

Davis received her nonprofit status last August; previously, she was covering all expenses out of pocket through her income as a photographer, but now she can accept donations. Last December, Davis had her first Pigtopia fundraiser buffet at Imagine Vegan Cafe. For $20, guests got access to an all-you-can-eat buffet of vegan pizza, “chicken” tenders and hot wings, dairy-free mac and cheese, spinach dip with chips, tofu deviled eggs, hush puppies, three varieties of vegetable tamales, cupcakes and cheese-free cheesecake.

Davis, who is vegan, uses her Pigtopia platform to push a message of compassion for animals.

On Pigtopia’s Facebook page she shares vegan recipes and posts videos that highlight the pigs’ intelligence (some studies have shown that pigs can outperform dogs, chimpanzees and even human toddlers on cognition tests).

“So many people have reached out to me and said they want to be vegan but they don’t know how. I have resources I send them with apps, recipe books and more,” Davis says. 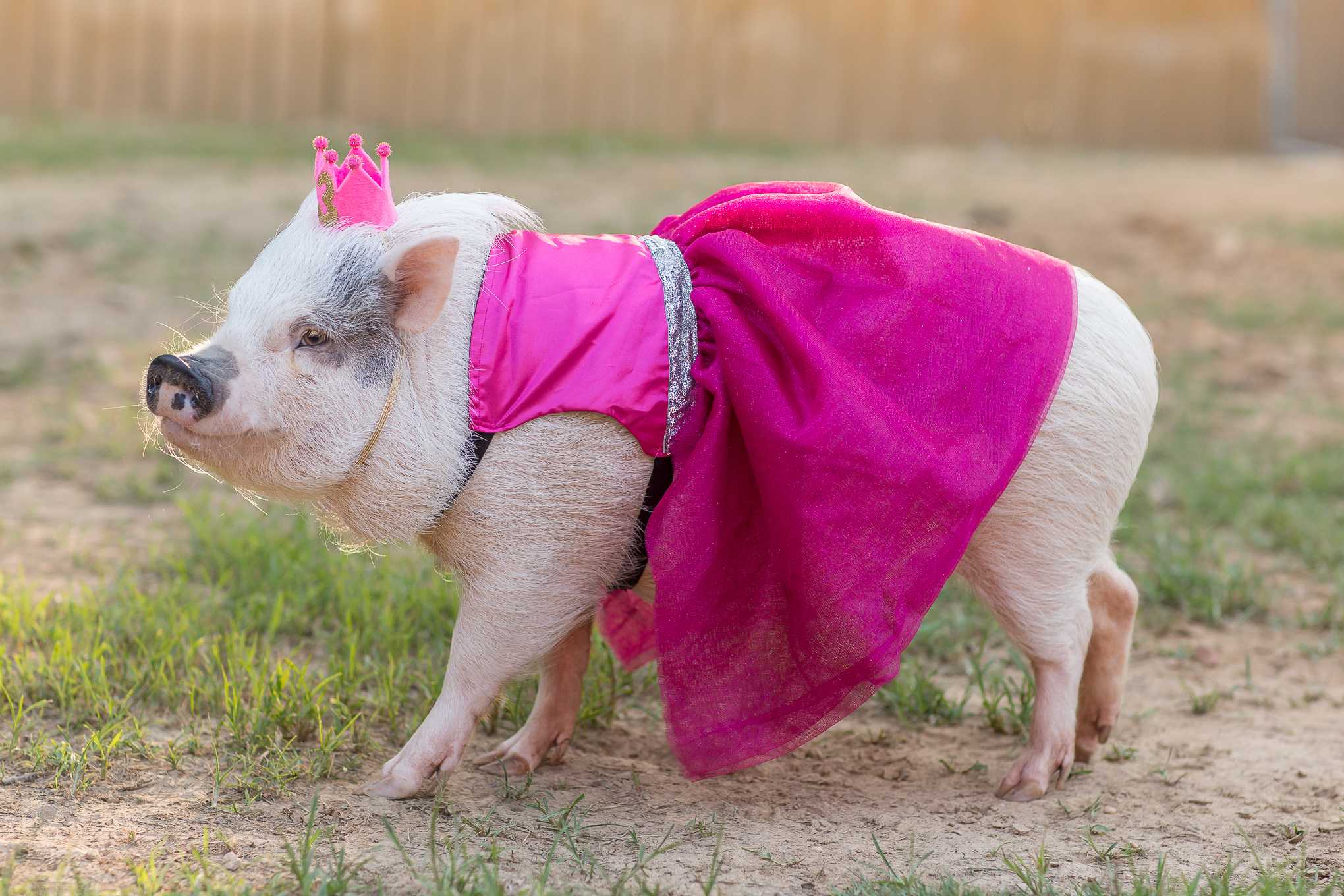 Davis wasn’t vegan when she first adopted Ellie, but she quickly saw how smart the pig was.

“I got Ellie in July 2013. She was so smart, and I just realized that I couldn’t eat something that was so intelligent. I started out saying, ‘I’m not going to eat pork.’ But I thought, ‘Cows are stupid and chickens are stupid.’ So I still ate meat,” Davis says.

“But I started watching videos about factory farming and reading books about veganism, and I just [gave up meat and dairy] cold turkey. I’ve been vegan for four years now,” she says. “I thought I’d just be eating salad, and then I found Imagine Vegan Cafe. I had [vegan] buffalo chicken and a [meat-free] Big Mac, and I realized I can do this.”

Eventually, Anna became a regular at Imagine and offered to help with art and design when they moved into their new location at 2158 Young Avenue.

Anna painted portraits of famous rescued farm animals, like Ziggy the Traveling Piggy, Farm Sanctuary’s Diane the Cow and Esther the Wonder Pig, as well as a portrait of Miss Piggy, the pet pig of Imagine owners Kristie and Adam Jeffrey.

“Anna brought to life the faces of the rescued animals who inspire us to do what we do at Imagine,” says Kristie Jeffrey. “She even helped us build tables. Anna is so talented, and she has been such a good friend. She has put so much love into Imagine.”

Veganism is at the heart of what Davis does with Pigtopia. While the potbellied pigs at Pigtopia likely wouldn’t have been used for meat, Davis points to two massive Hampshire mix pigs—Scully and Mulder—as examples of pigs who would have been either slaughtered or used to breed pigs for slaughter.

On this day, the two big pigs are grunting loudly and rooting around in the mud, occasionally stopping to flop over for belly rubs from their guests and Davis. Scully is what’s known as a maple pig, a rare type of pig whose skin smells like maple syrup.

“They were sold as a breeding pair from the same farm. A woman had them listed on Facebook Marketplace as a pair of breeding pigs. They were both in a kennel full of poop,” says Davis, who purchased the pigs in an attempt to save them from an unfortunate fate. “In the rescue community, with farm pigs, most rescuers will tell you not to buy so you’re not supporting the industry. And I wouldn’t do it again, but I don’t regret it.” 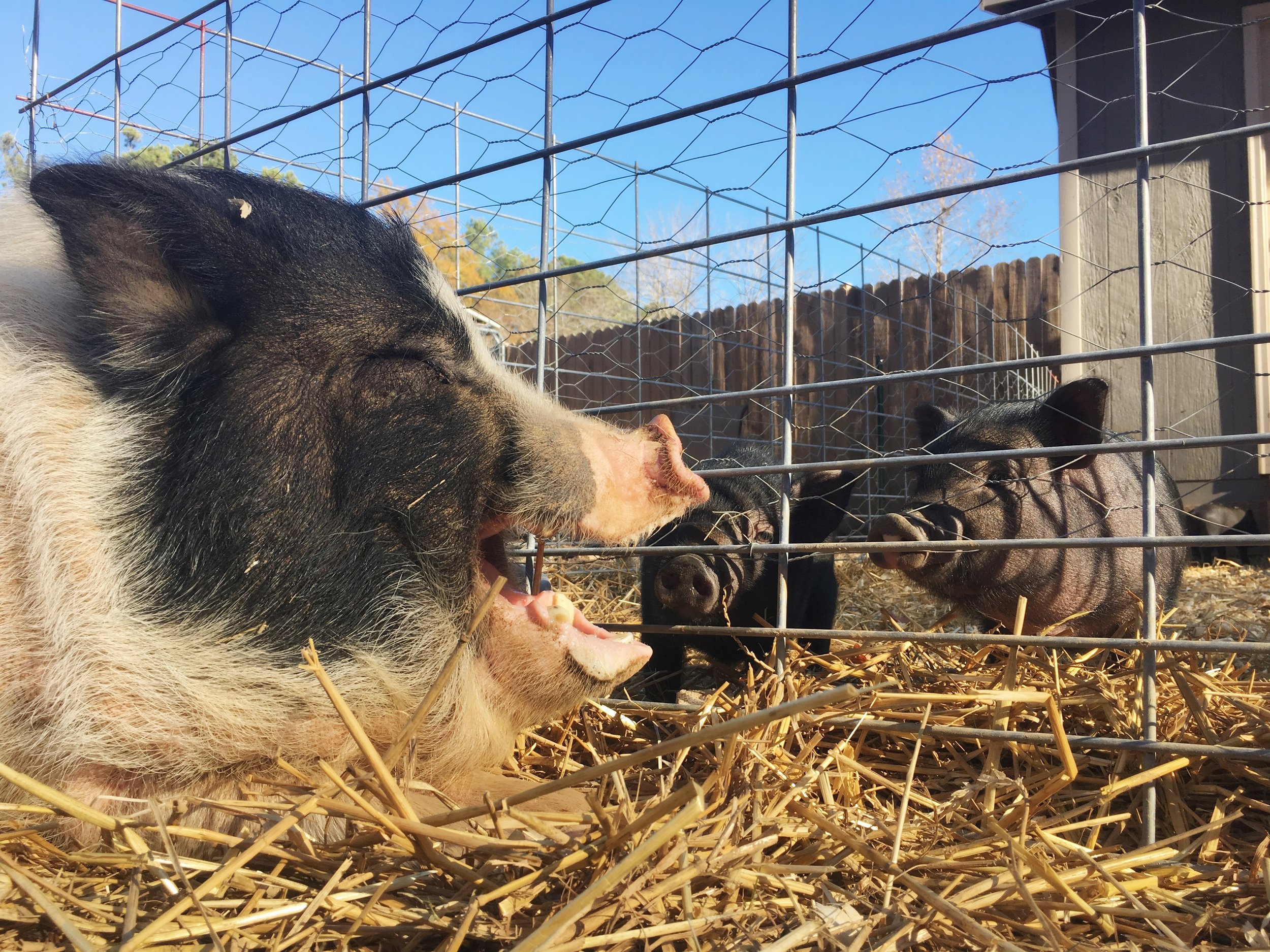 A little brown pig named Bambi may have been butchered as well, had Davis not stepped in to save her. She was running loose in a Memphis neighborhood and some people had shared her photo on social media with jokes about finding her and barbecuing her.

Davis went on the search and figured out that Bambi had found her way onto a pig farm, which Davis speculates she chose for the food and companionship of other pigs. The man who owned the farm told Davis she could have her because she might be too little to butcher. Davis took her to the sanctuary, and a month later, she had 10 piglets. Three have since been adopted, but seven remain available for adoption.

Many of the pigs at Pigtopia are currently up for adoption, but Davis has a strict process for accepting potential adopters.

“They have to show that they have a vet, and it’s hard to find a vet for pigs,” Davis says. “People have to understand that pigs and dogs don’t mix. It’s predator and prey. That unfortunately cuts out a lot of families. They can have both, but you can’t leave them unattended. You have to understand that the pigs will root up your yard. And you have to know that they can live 20 years, and they’re very emotional animals.”

Now that Pigtopia has its nonprofit status, Davis has begun fundraising on her website, pigtopia.org. Funders can opt to sponsor a pig for $15 or $25, or they can give $5 or $7 to provide a bale of hay or a bag of shavings for Pigtopia’s barn. 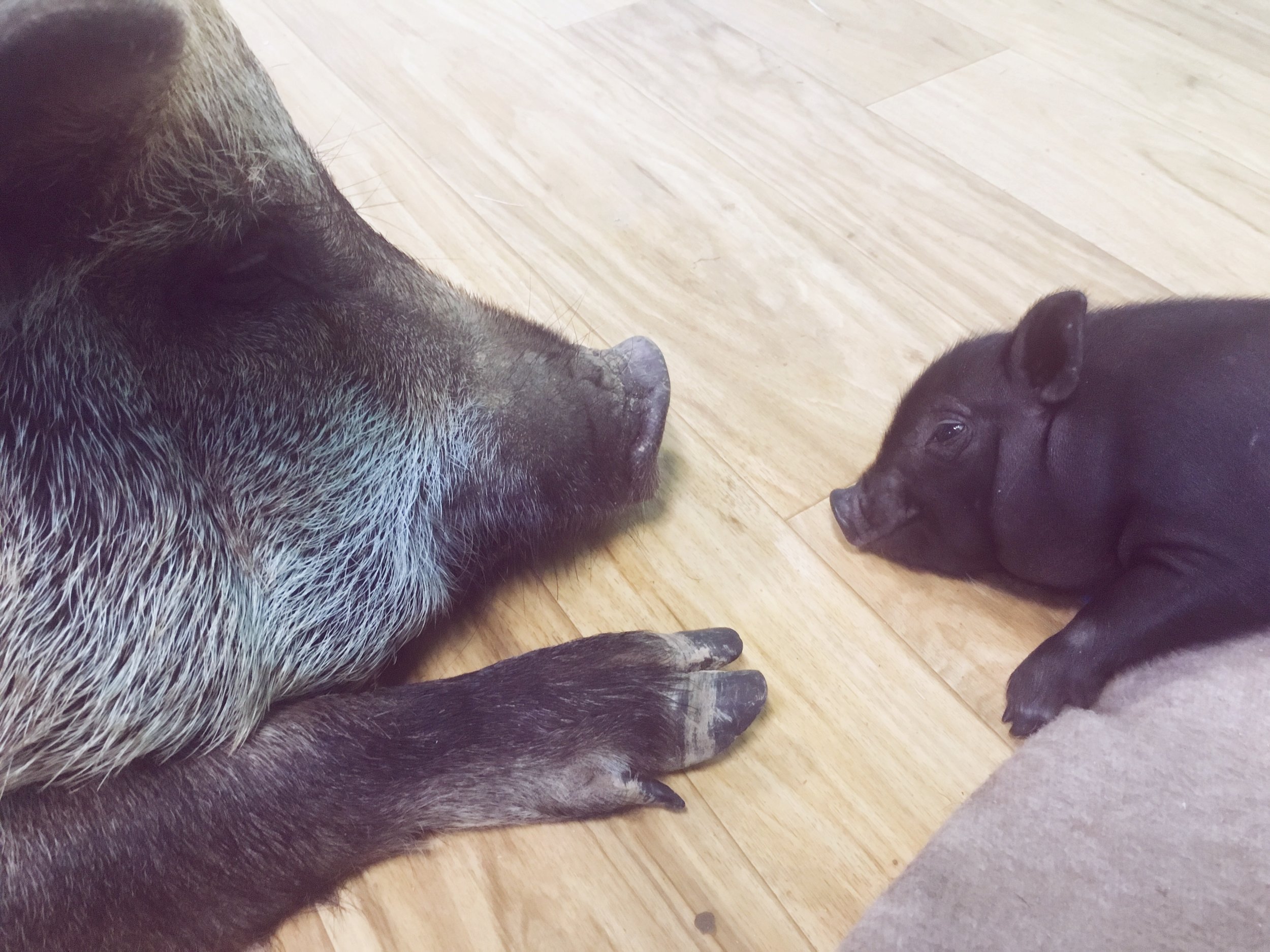 Davis is not currently accepting new pigs, as she feels she’s maxed out on space for them in her current backyard. But her family owns six acres around her home, and as she raises more funds, she intends to expand her space.

“We’re going to get everyone on pasture and out of the mud,” Davis says. “We need new barns, and then we can look at building a medical barn for sick pigs and quarantine facility for new pigs that may need to be separated.” 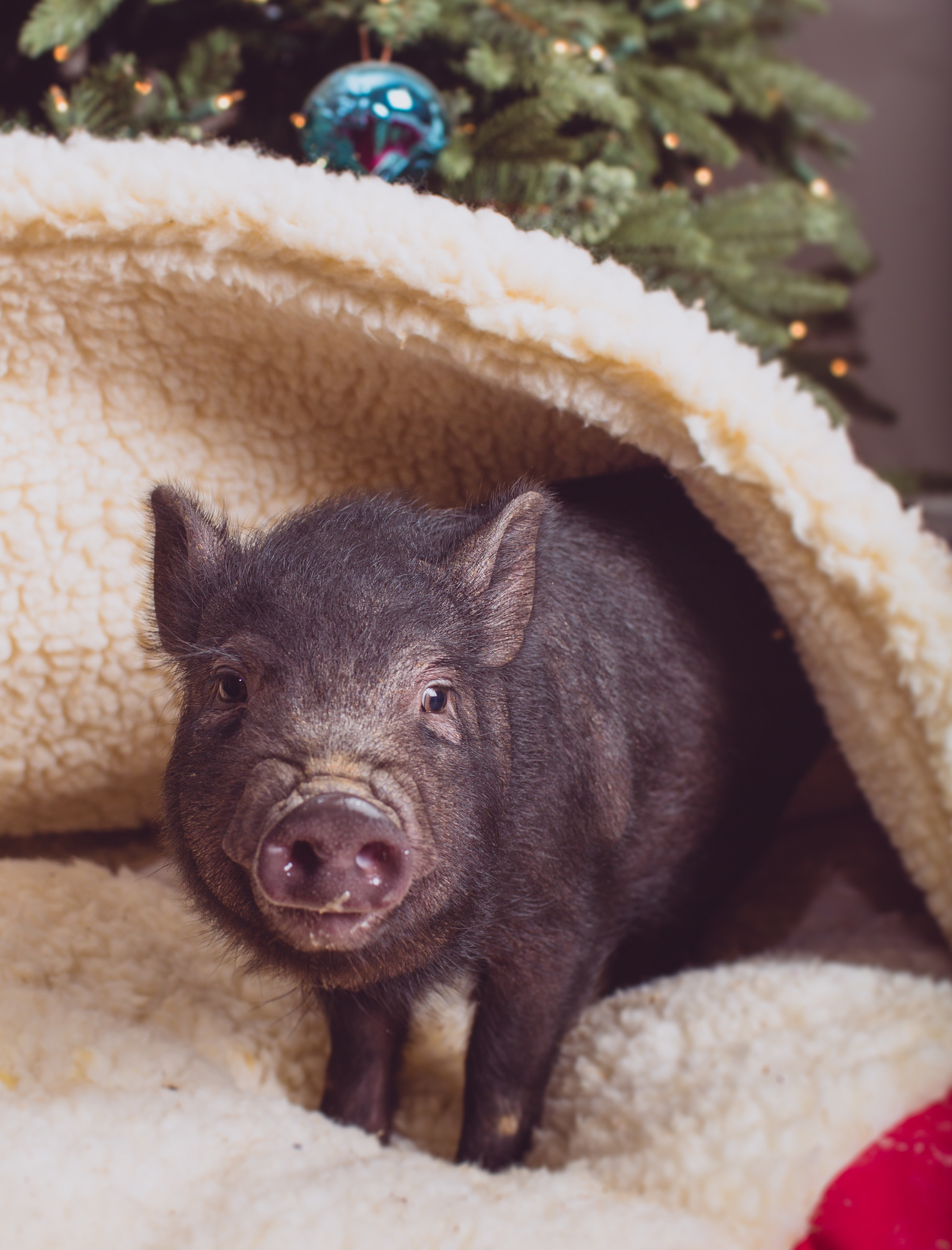 Bianca Phillips writes about vegan food (and shares images of everything she eats) on her blog, Vegan Crunk. She’s the author of Cookin’ Crunk: Eatin’ Vegan in the Dirty South. By day she works as the communications coordinator for Crosstown Arts/Crosstown Concourse. She and her partner, Paul, are the proud parents of five cats and one very stubborn (but adorable) pit bull.

Tim, Lena and the Edge