An interview with Marika Josephson of Scratch Brewing Company 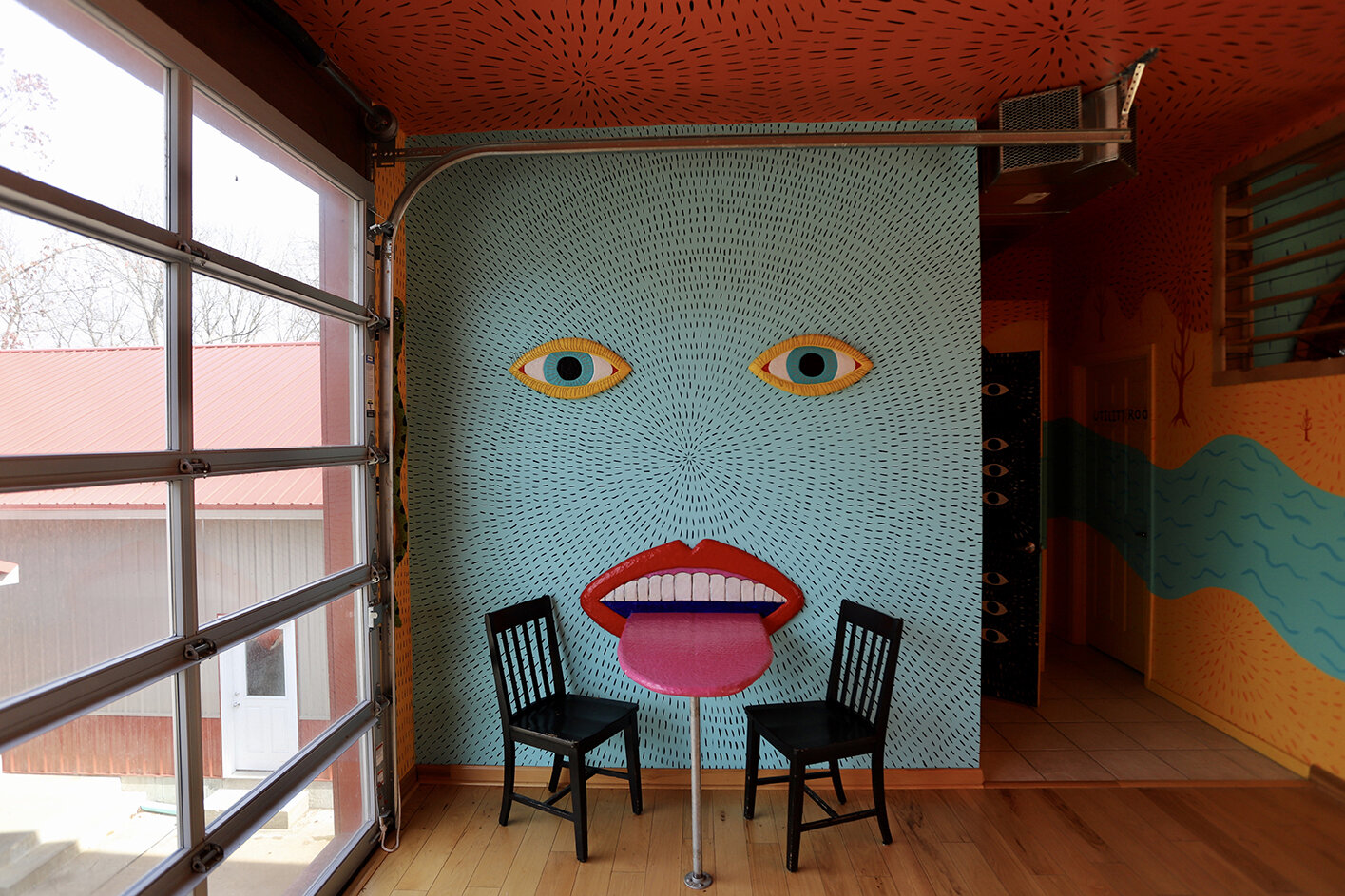 Scratch Brewing Company is a farmhouse brewery in southern Illinois. It’s about five miles from the Shawnee National Forest and about a three-hour drive from Memphis. At Scratch, they take their name seriously—making beer from things they grow or forage; baking their own sourdough bread, pretzels, and pizza dough; growing many of their pizza toppings; and even raising the goats that provide their cheese. It’s a beautiful place to drink beer and enjoy a meal—not to mention it’s by far the most interesting beer I’ve ever tried. Dry-hopped pawpaw, anyone? Basil ale? Fig leaf black ale? They even have an entire line of mushroom beers. 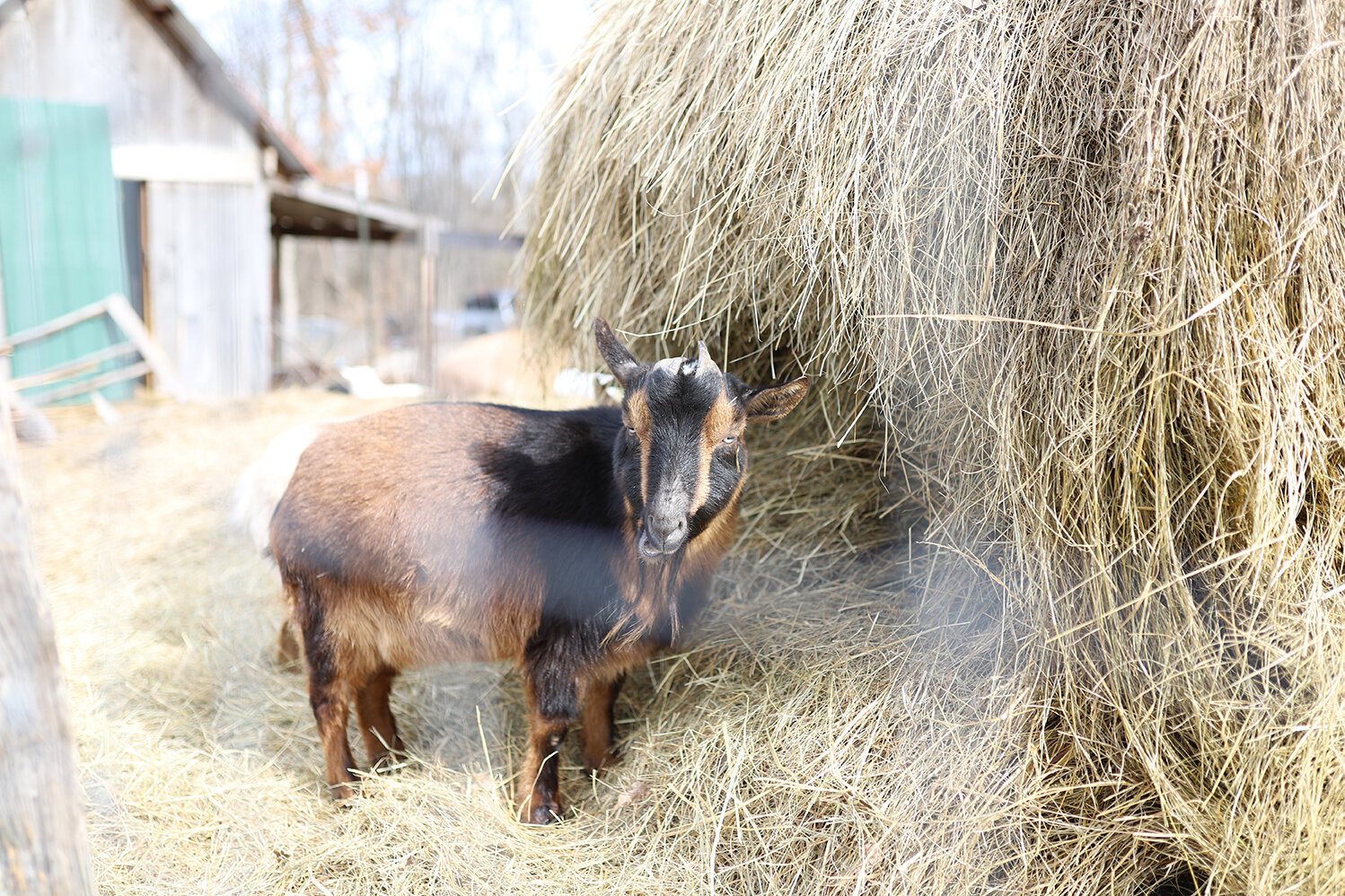 Visiting the brewery was my last road trip prior to COVID-19 and most certainly will be my first trip once it’s safe to travel. (At the moment they’re doing curbside pickups only. Check with them before you go for updated information.)

I had a chance to interview co-owner and head brewer Marika Josephson before my last visit and found out how she got into brewing and what inspired her to start the Scratch Brewing Company. 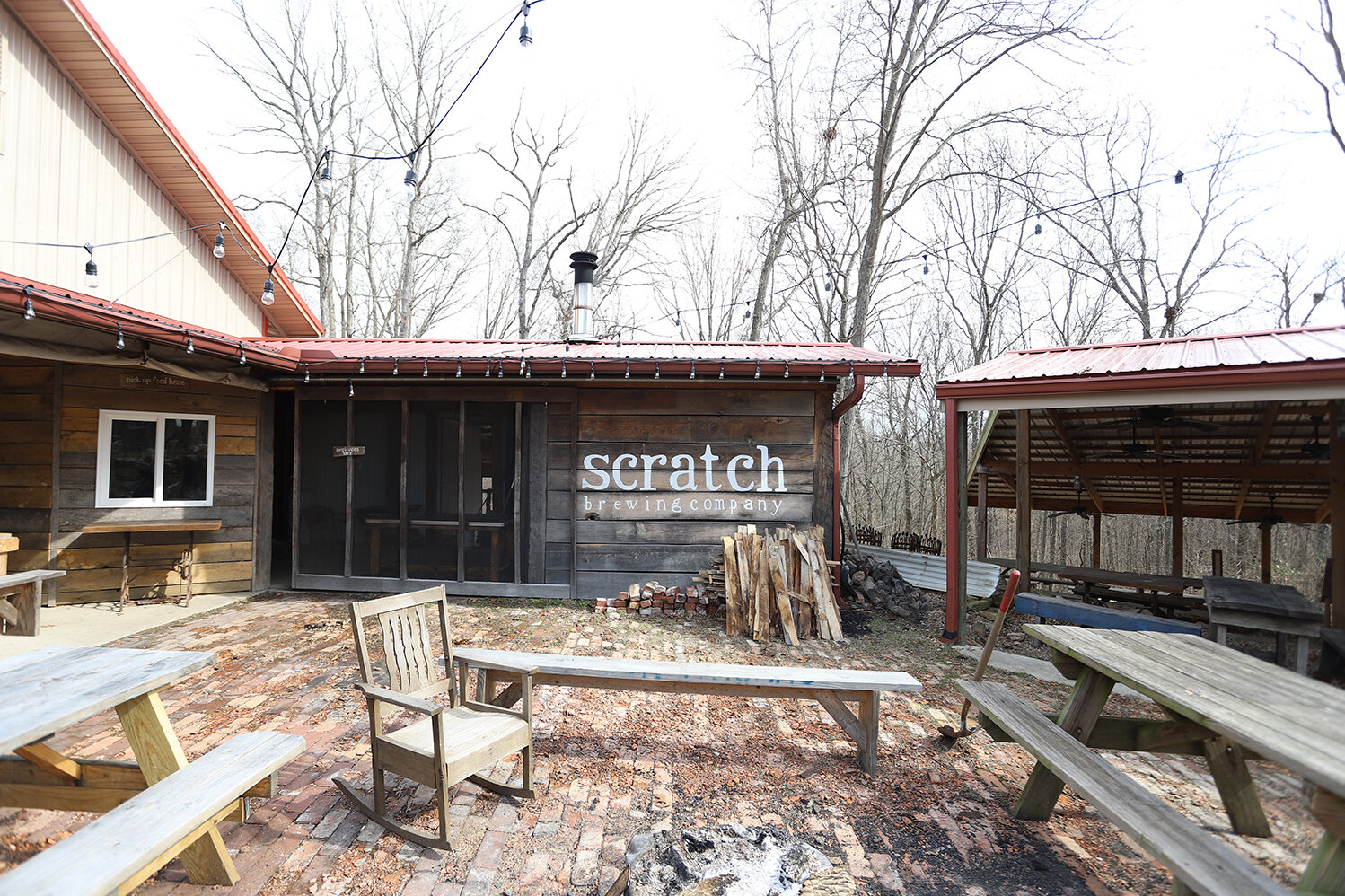 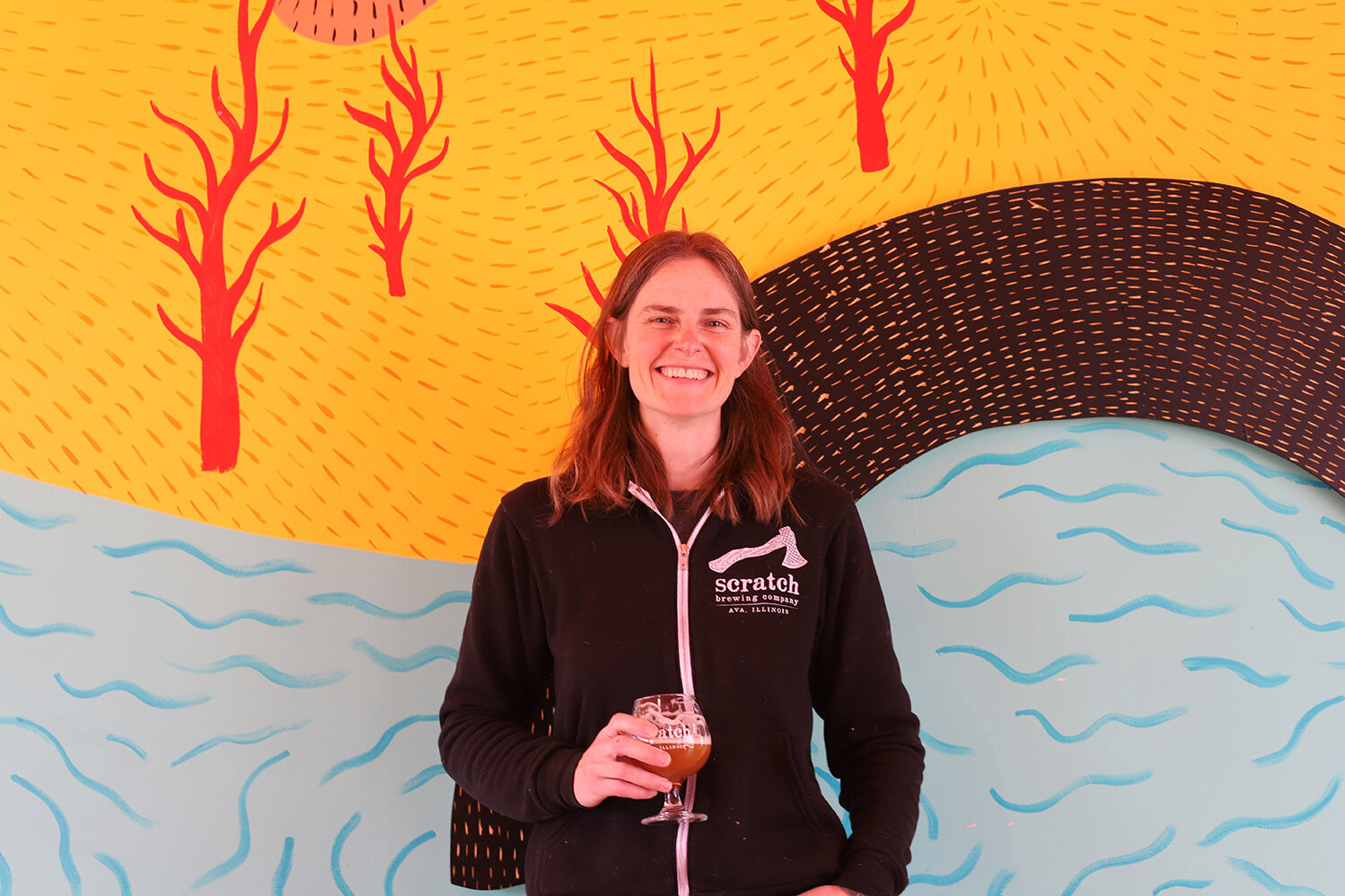 Edible Memphis: Where are you from?

Marika Josephson: I grew up in San Diego, although I haven’t lived there since I was 18. I moved to southern Illinois about 11 years ago. [Co-owner] Aaron Kleidon is from southern Illinois, and the brewery is on a portion of his family’s land in Ava. He moved away for several years but moved back right when I moved to the area, and we met through the home brewing community.

I have a BA in English and a PhD in philosophy. Aaron has a BA in photography. We both have a liberal arts background but a passion for beer. We’ve also both been fortunate to travel a lot. Aaron always says that a little bit of all of the places we’ve been has ended up in our brewery. I studied abroad in Italy in college and am fluent in Italian. Our pizza oven was partly an homage to some of the great pizza I had there. Aaron studied in Austria and traveled a lot while working for an airline in Aspen. We wanted the brewery to be a place that conveyed the special aspects of this region, much as we experienced while traveling in other parts of the world.

How/when did you start brewing beer? How did you get the idea for the Scratch brewery?

I started brewing beer when I moved here. I finally had the time and space to be able to do it. Aaron had been brewing since he lived in Colorado. We were both experimenting with brewing beer that utilized ingredients that were growing in southern Illinois, whether they were wild or farmed. As we started brewing together and deciding on our location, we realized that those were the beers we wanted to produce commercially, and we wanted to make them the heart of our business. 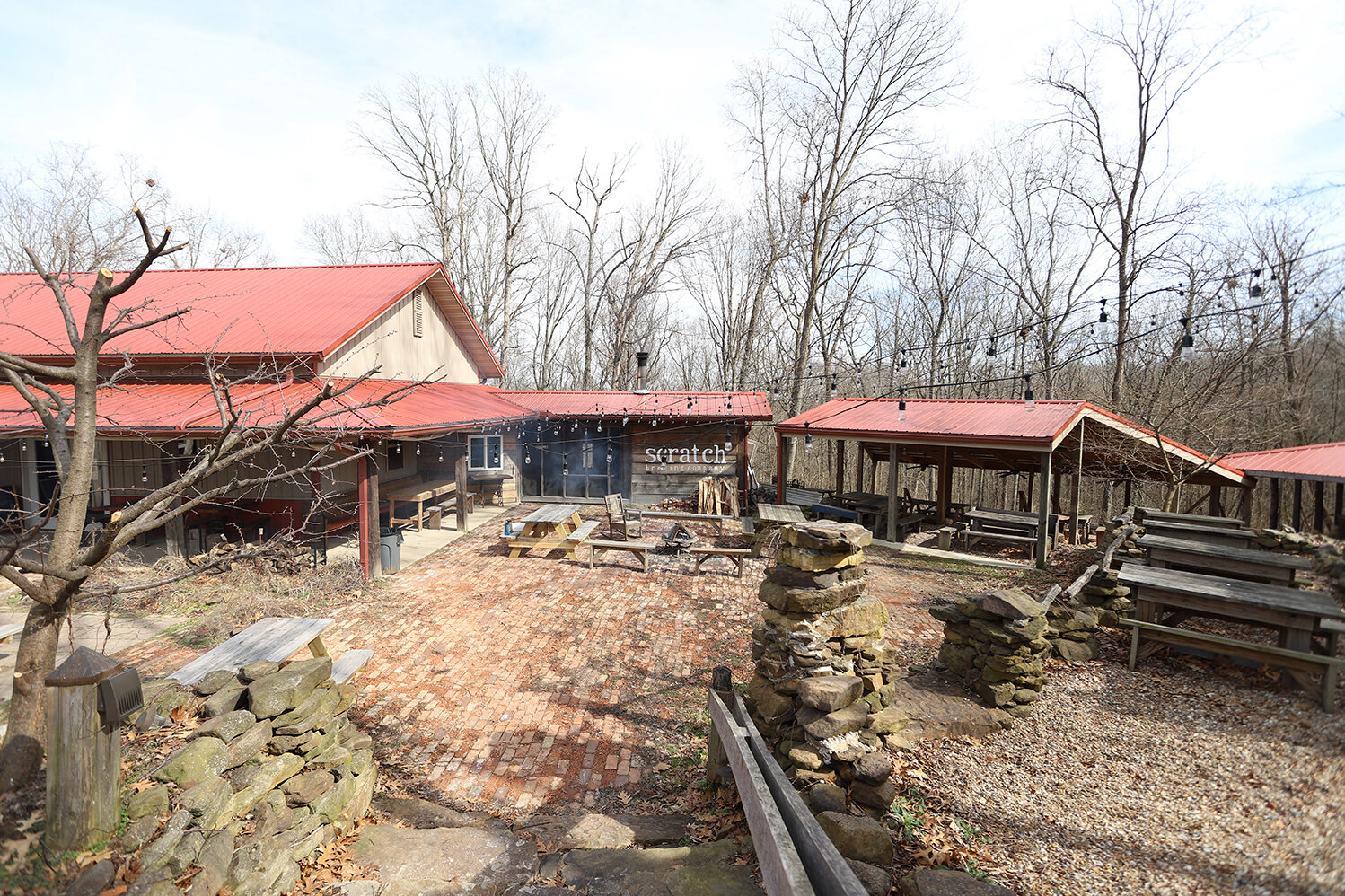 What’s it like being a female brewer in the industry?

Despite the growth and new competition in the industry, the craft beer community is still an incredibly warm and welcoming one. Women brewers are definitely the minority, but you can find women in many other aspects of the brewery and the business. I think women do have to work harder to be seen in the industry. Most people default to beards when they ask questions and make assumptions about the brewers. But we need more women who love beer to be part of the community to change people’s perceptions. 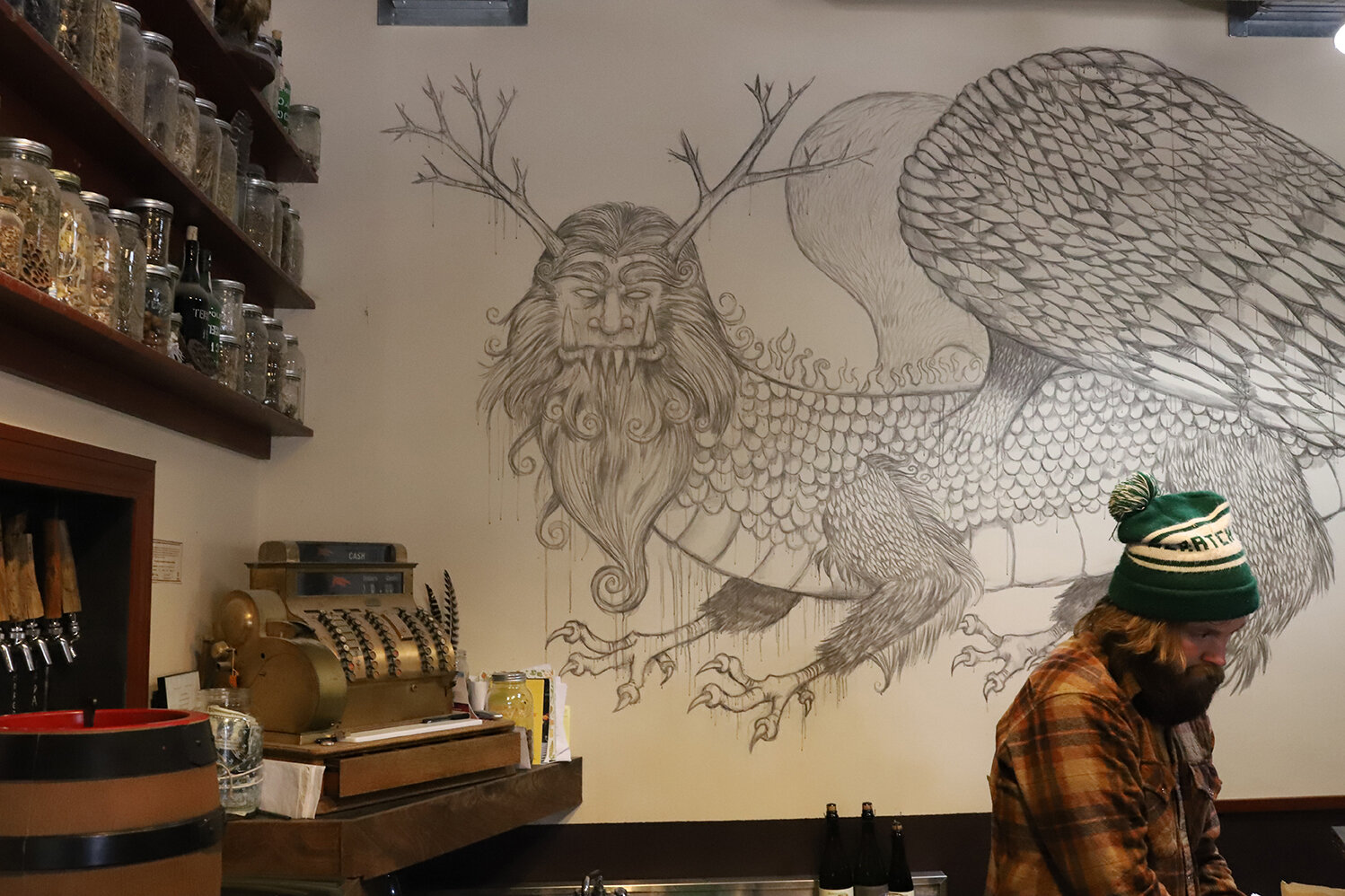 Describe the relationship between you, Aaron, and the farmers.

Aaron was doing all of our gardening and farming when we first opened. After a couple of years, when the business had expanded, he just didn’t have the time to do it anymore. Luckily, it was right then that Kris [Pirmann] and Adriane [Koontz] fell into our lives. They were just finishing a sabbatical managing Henry’s Farm up north and were moving back down south and ready for a change. They really expanded what we were growing here and have helped process thousands of pounds of produce over the years. They’ve become an indispensable part of our brewery.

What are the benefits/challenges of brewing beer from only the things you grow or forage?

Limiting ourselves to ingredients we can find in this area has challenged us to look at plants in a different way. It’s obvious to look at a strawberry plant and see the fruit and harvest the berries. It’s less obvious, however, to think about the leaves, or even the green tops. It’s less obvious to look at a rose bush and think about how to use the roots for brewing or to see a maple tree and think about using the bark. But that’s what we’ve trained ourselves to do when we see plants—we see the whole plant. We wonder how flavors change throughout the seasons. We look out our window and see what’s available in the winter and wonder how we can utilize a plant best during that time of year. 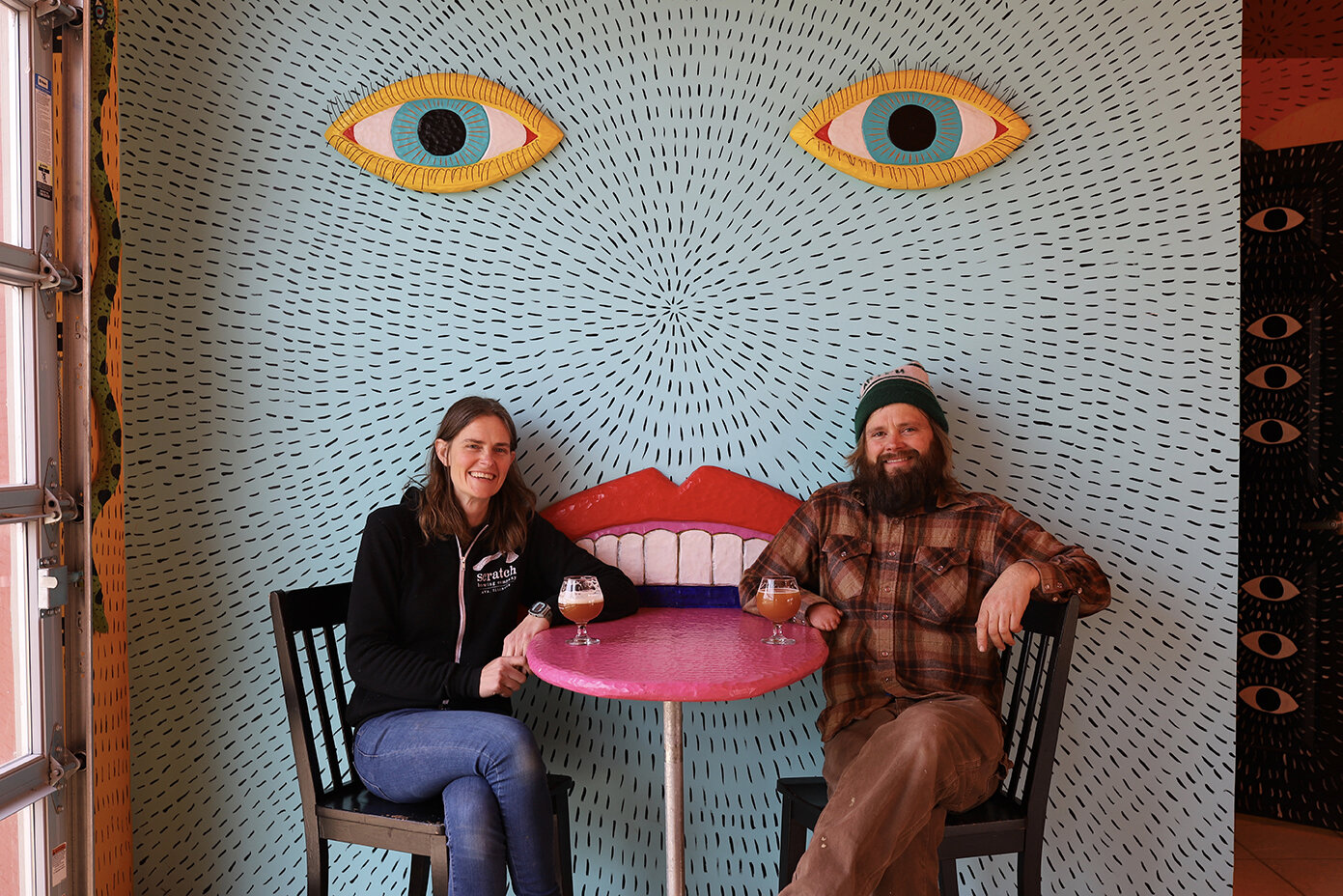 What are some of your favorite beers you’ve brewed and why?

One of my favorites is our Chanterelle Biere de Garde. It was the first beer we put into bottles and a beer we make every year if the chanterelle mushroom harvest is large enough. I love the base style—it’s a malty French-style farmhouse ale that ferments at lager temperatures so it’s crisp and has a cellared character that we enhanced with mushrooms. But chanterelles also have a distinctive buttery, apricot flavor, and they come through beautifully in that beer. The beer smells like a basket of freshly harvested chanterelles picked in the summer. 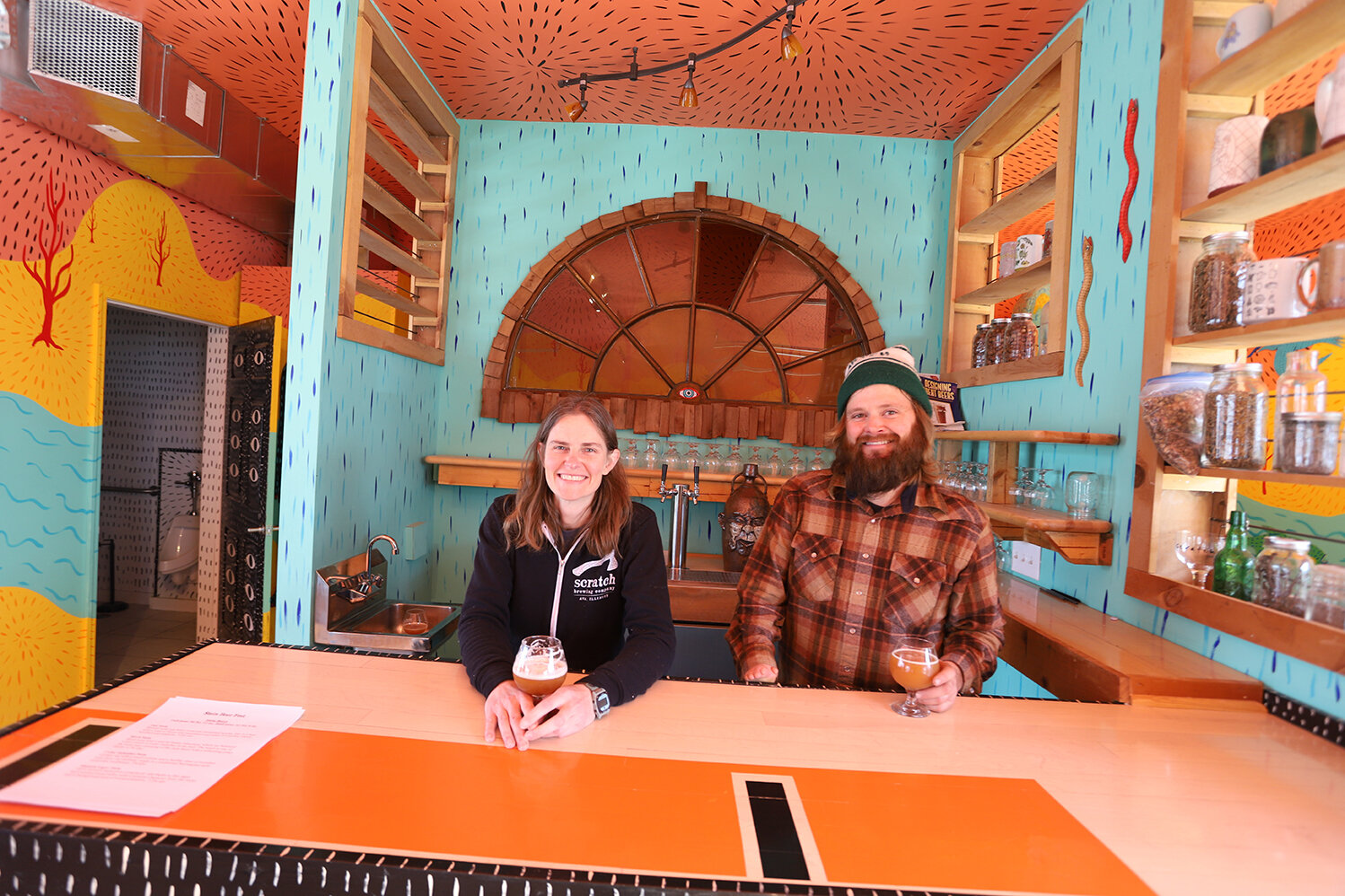 Do you see a lot of tourists in the brewery or mostly locals?

We get a good mix of local and travelers, more travelers as our beer has become more well-known outside of our area. We love the mix of people you may find drinking here at any given time—farmers, hunters, students from the university, travelers from all over the country and even the world. Some amazing conversations are had out here. 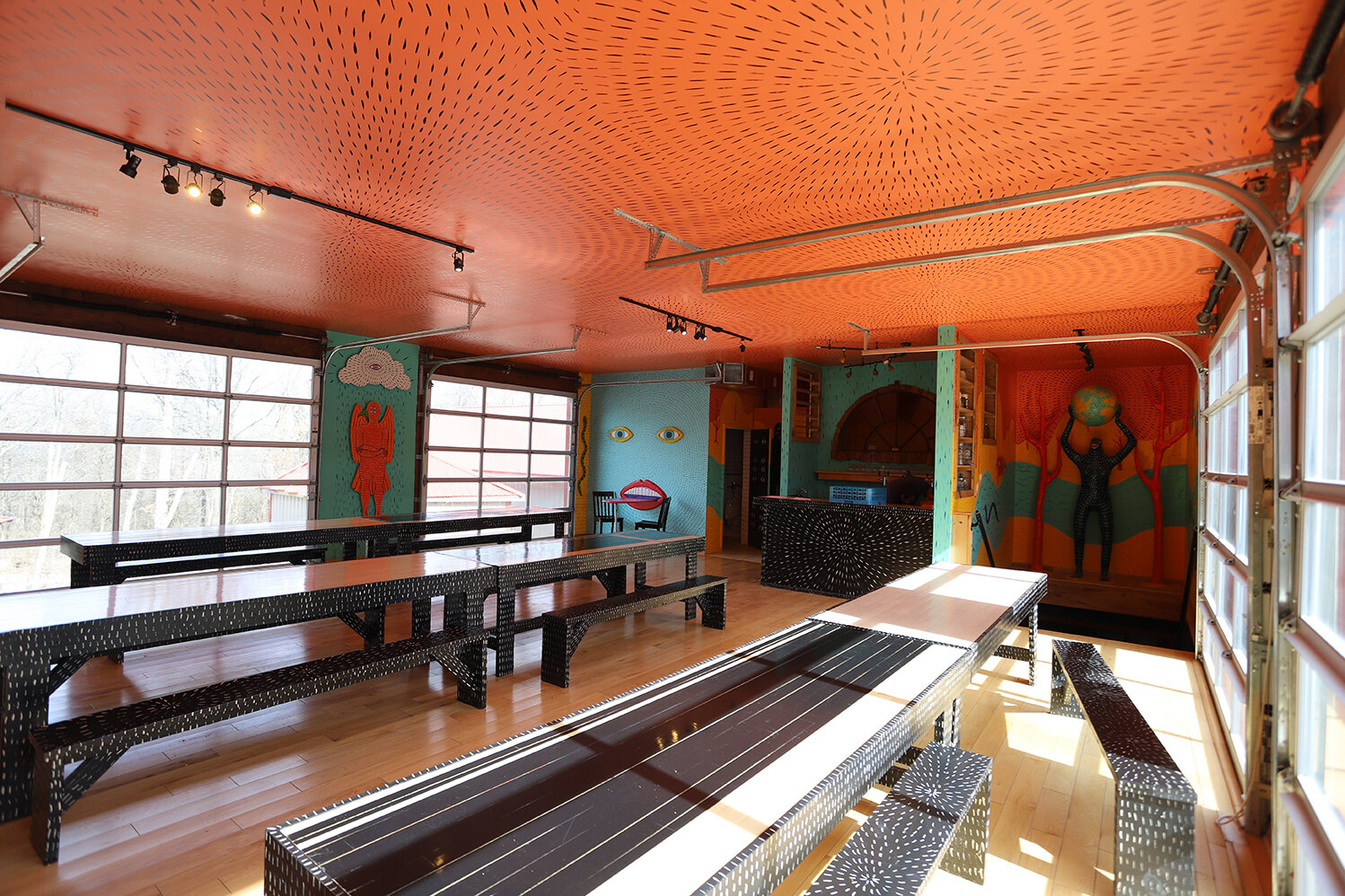 What is the southern Illinois beer scene like, and how do you fit in or stand out?

We have a slowly growing beer community. Our region is fairly large; it’s often considered to be the line from about I-64, south, so that encompasses East St. Louis all the way down to Cairo and as far east as Shawneetown and the border of Indiana and Kentucky. In that vast swath of country, a number of breweries have opened in the last five years. Down near us, within about an hour’s drive, there are around five breweries, and everyone is making different beer, so you will certainly have a different experience anywhere you go. We’re the only brewery focused specifically on local ingredients. 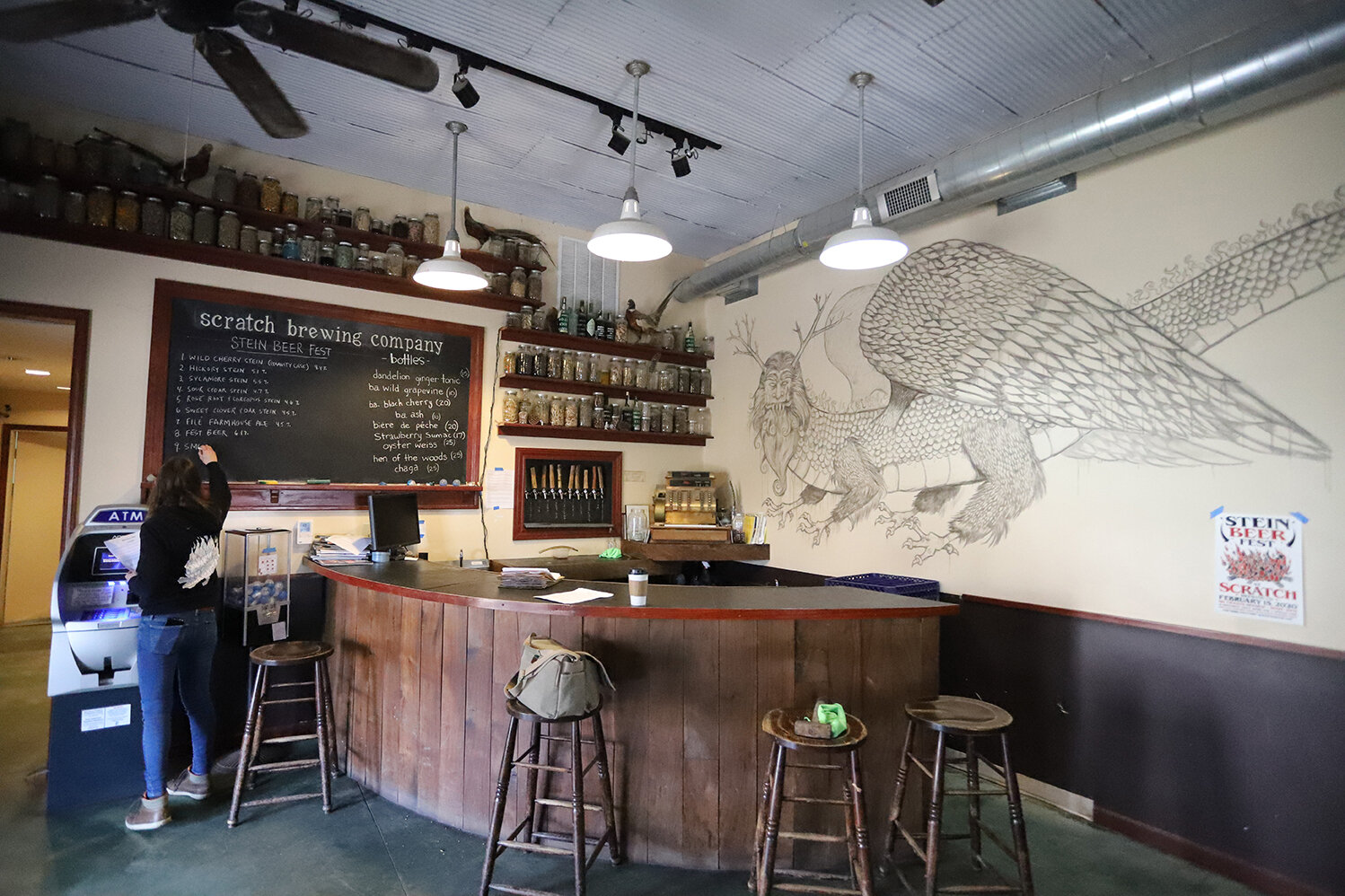 When is a good time to visit?

We’re open year-round, and our beer list is constantly changing, so you will have interesting and unique beer any time you visit. To really enjoy our outdoor space and beer garden, the spring and fall are a beautiful time to be here. 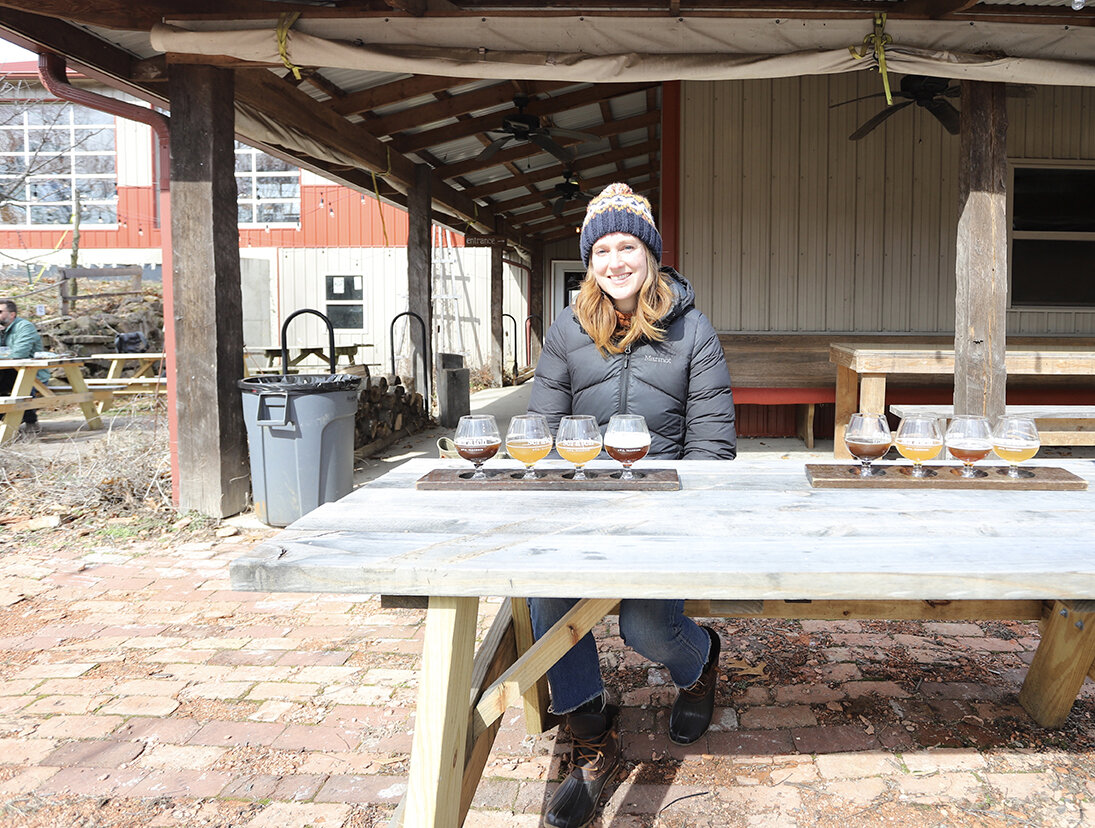 No Going Back to Normal, Part 1