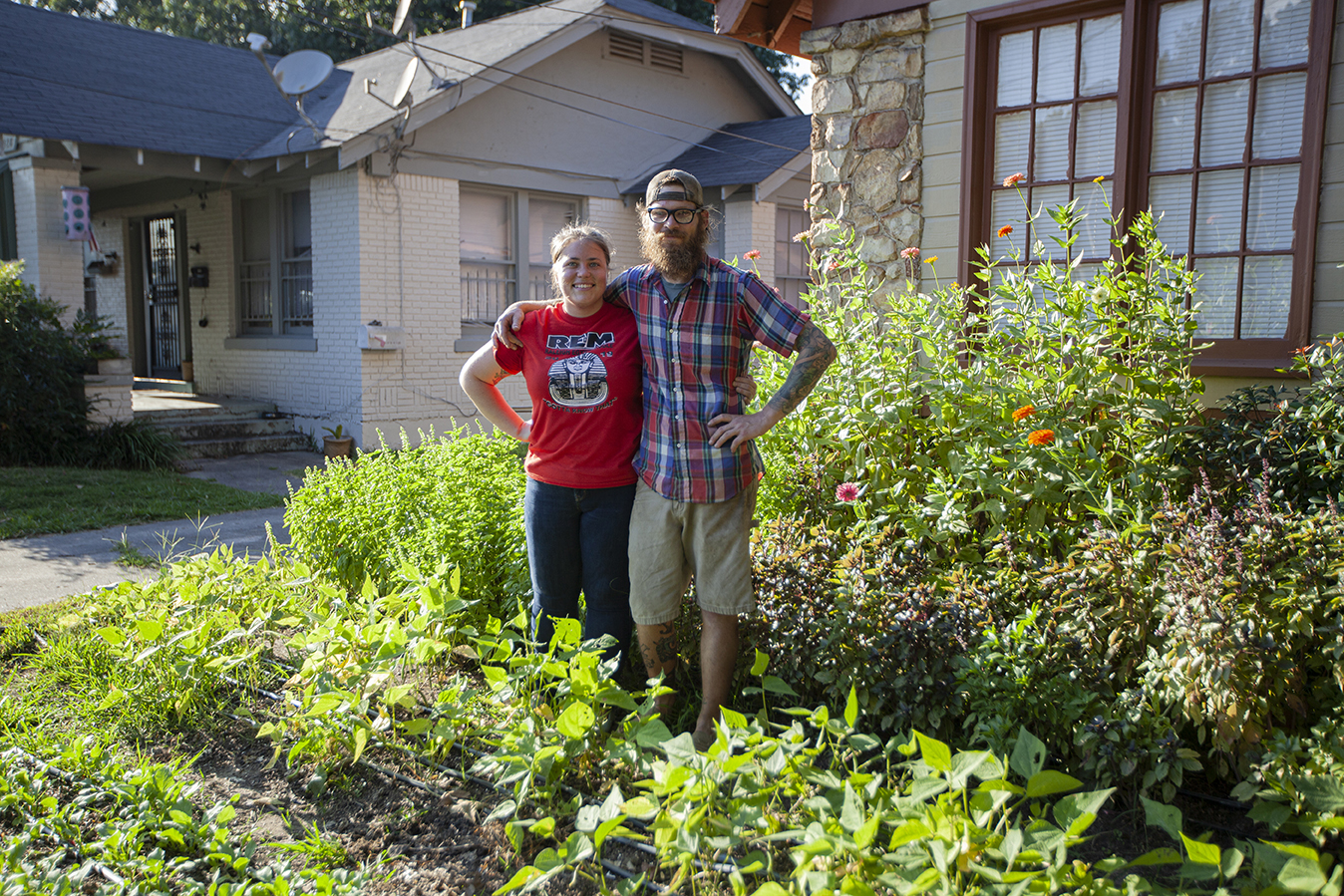 Renée Embry and Adam Queen’s story starts as all envious romantic tales of young, passionate, idealistic Midtown lovers tend to do, at the P&H Café.

In the back of this smoky bar, their relationship grew over pitchers of cheap beer and a desire to leave the world a better place than they found it. Separately, they were already working towards this end. Renée was volunteering for a medical nonprofit at summer camps around the country and Adam was learning all he could about organic farming and soil microbiology. 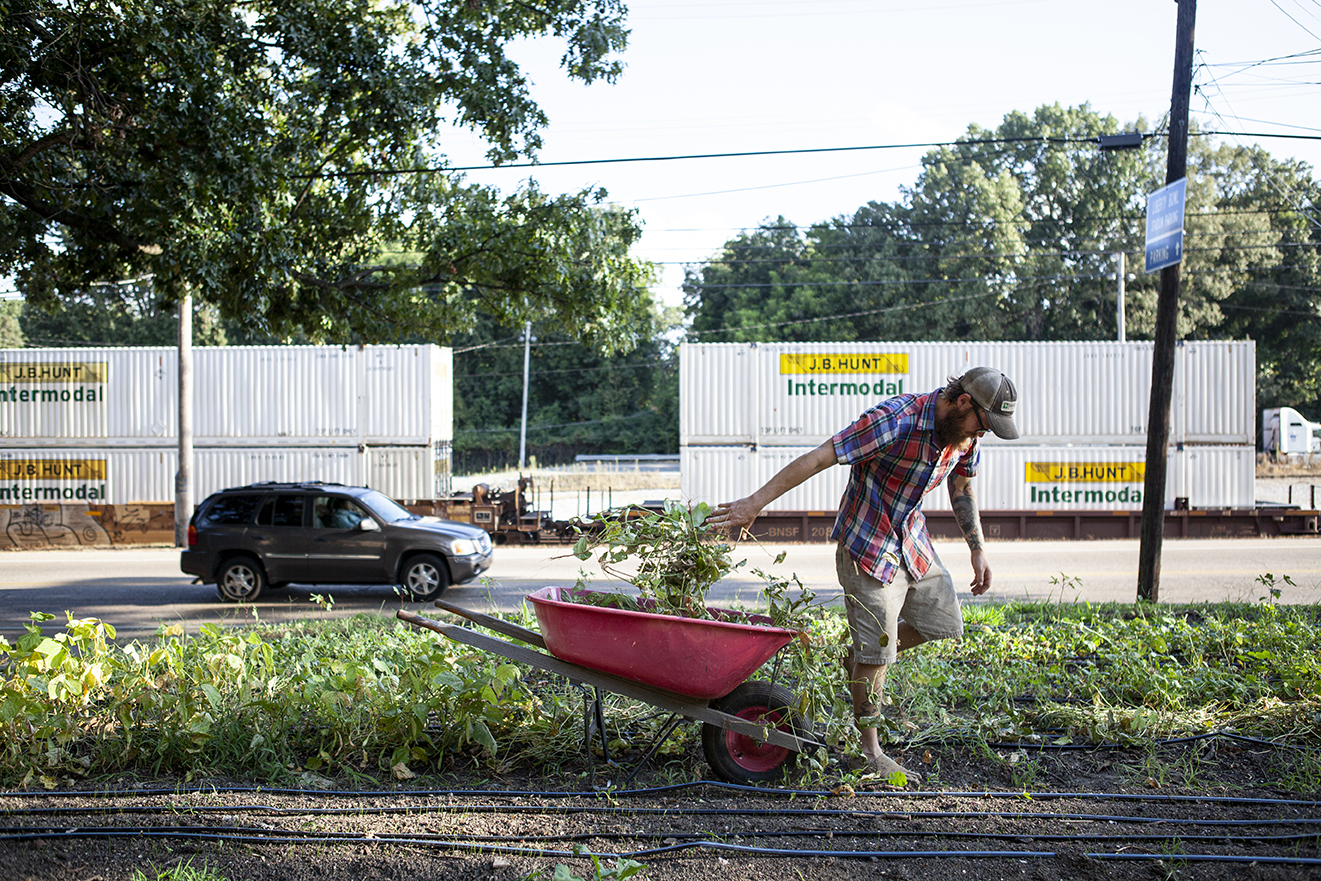 Adam comes from a long line of family farmers. He spent six years after college working for his father’s business in Henning, Tennessee, on Queen Farms. It is what one would call a traditional West Tennessee farm, producing cotton, corn and soybeans. In what little free time Adam had, he began growing vegetables near his house.

He found he had quite a knack for gardening and soon began reading books about organic farming.

This new hobby soon became his primary interest, and he began to take his vegetables to the Court Square Farmers Market in Covington, Tennessee. 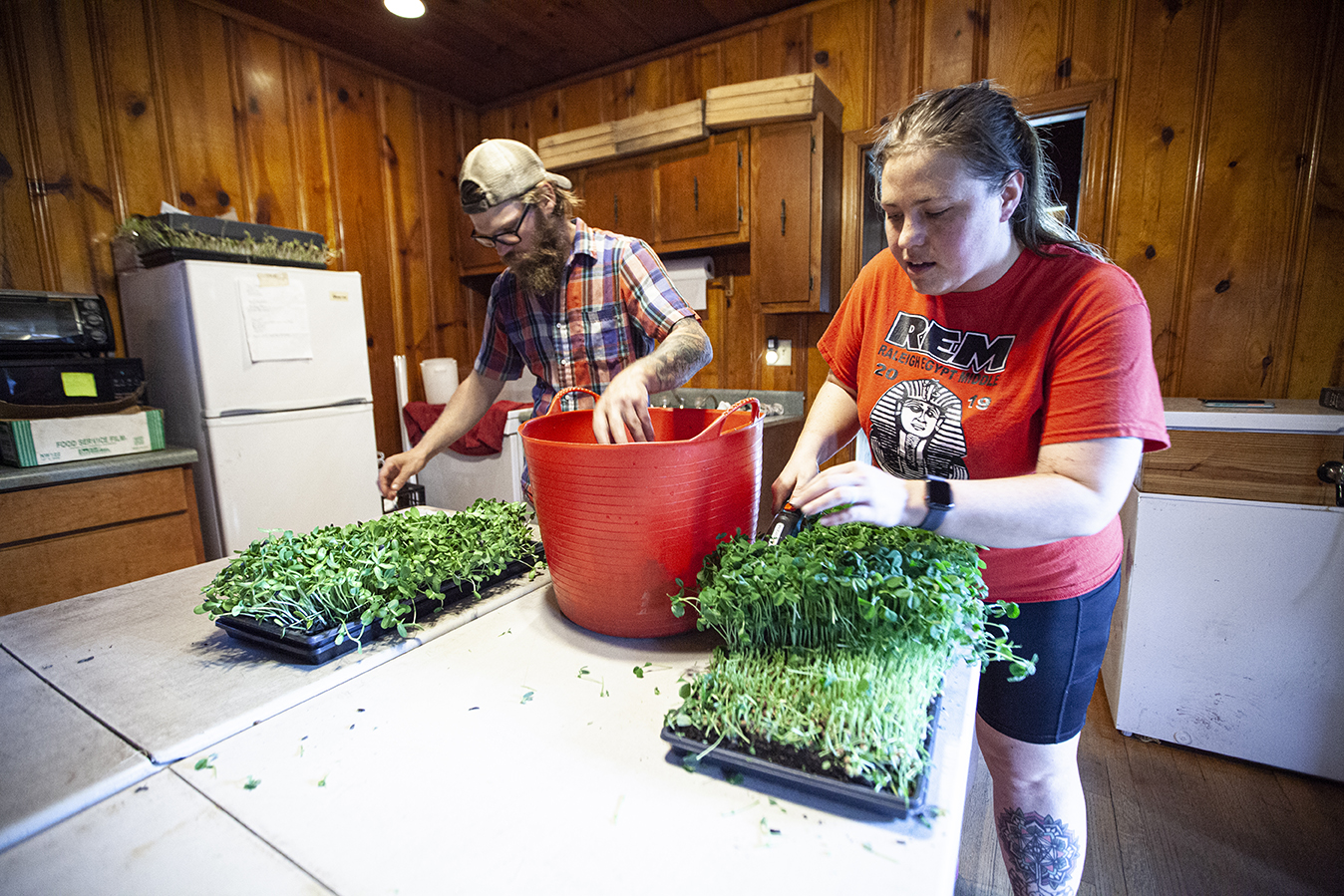 After a year of driving back and forth between Memphis and Henning, Renée and Adam decided to move in together. It sounds silly to them now, but Renée moving to Henning made the most sense at the time.

She laughs when explaining that it was simply easier for her to move to Henning than for Adam to move his farm to Memphis.

They were essentially “homesteaders” in their first place together in Henning—an old farmhouse with no heating or air conditioning. They had only a wood burning stove in the winter and fans in the summer. “It was rough,” Adam says. Nothing ever worked, and everything from the roof to the floorboards needed to be replaced or required major work. After getting several quotes to fix up the place, something became very clear to them—it would be cheaper to build a new house.

And so they did.

Renée and Adam built a roundhouse on top of a small hill in Lauderdale County and started growing their own farming business, Rolling Along Farms. For the first several years they mainly grew vegetables and then added in microgreens. Along the way, they worked to get their Certified Naturally Grown (CNG) certification. 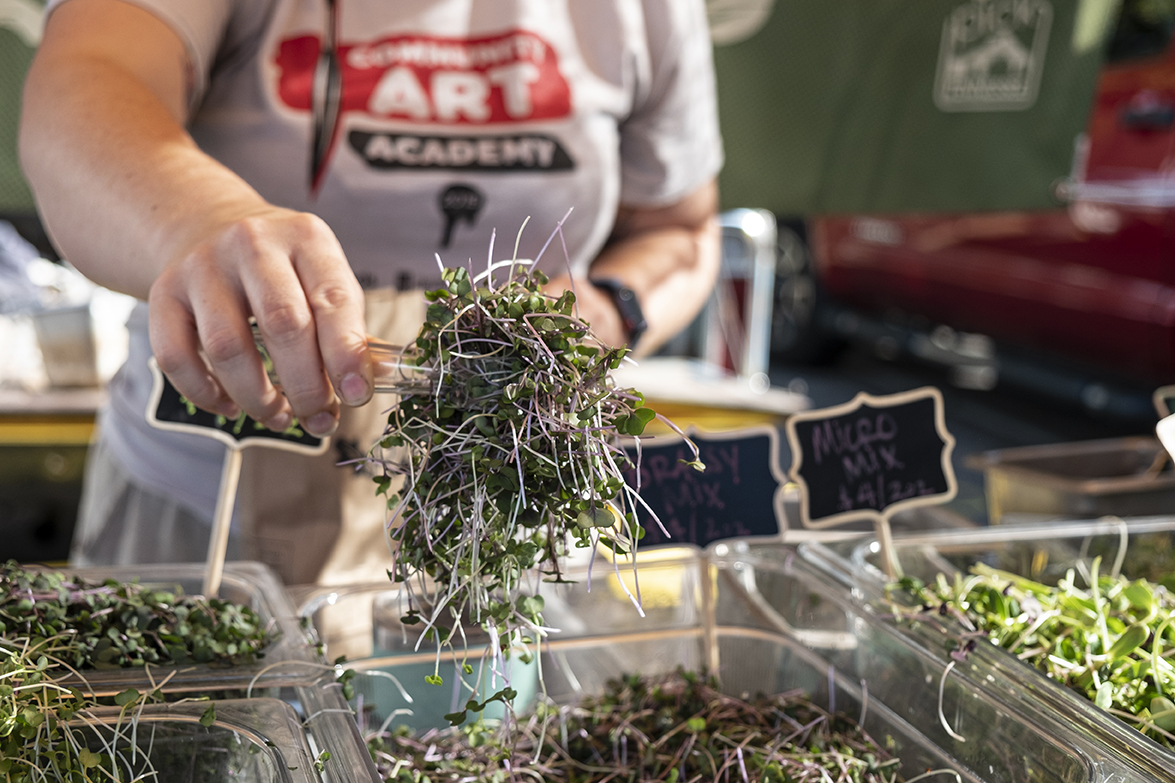 CNG offers peer-review certification to farmers and beekeepers producing food for their local communities by working in harmony with nature, without relying on synthetic chemicals or GMOs. There are two components during the review process for certification: One, a CNG-certified farmer has to come out and inspect every aspect of the applicant’s farm. Two, the applicant goes to inspect a farm. “It essentially creates a community of farmers,” says Adam.

After about a year of living in their new house, the distance from Memphis was becoming an issue and was impeding the growth of their business. 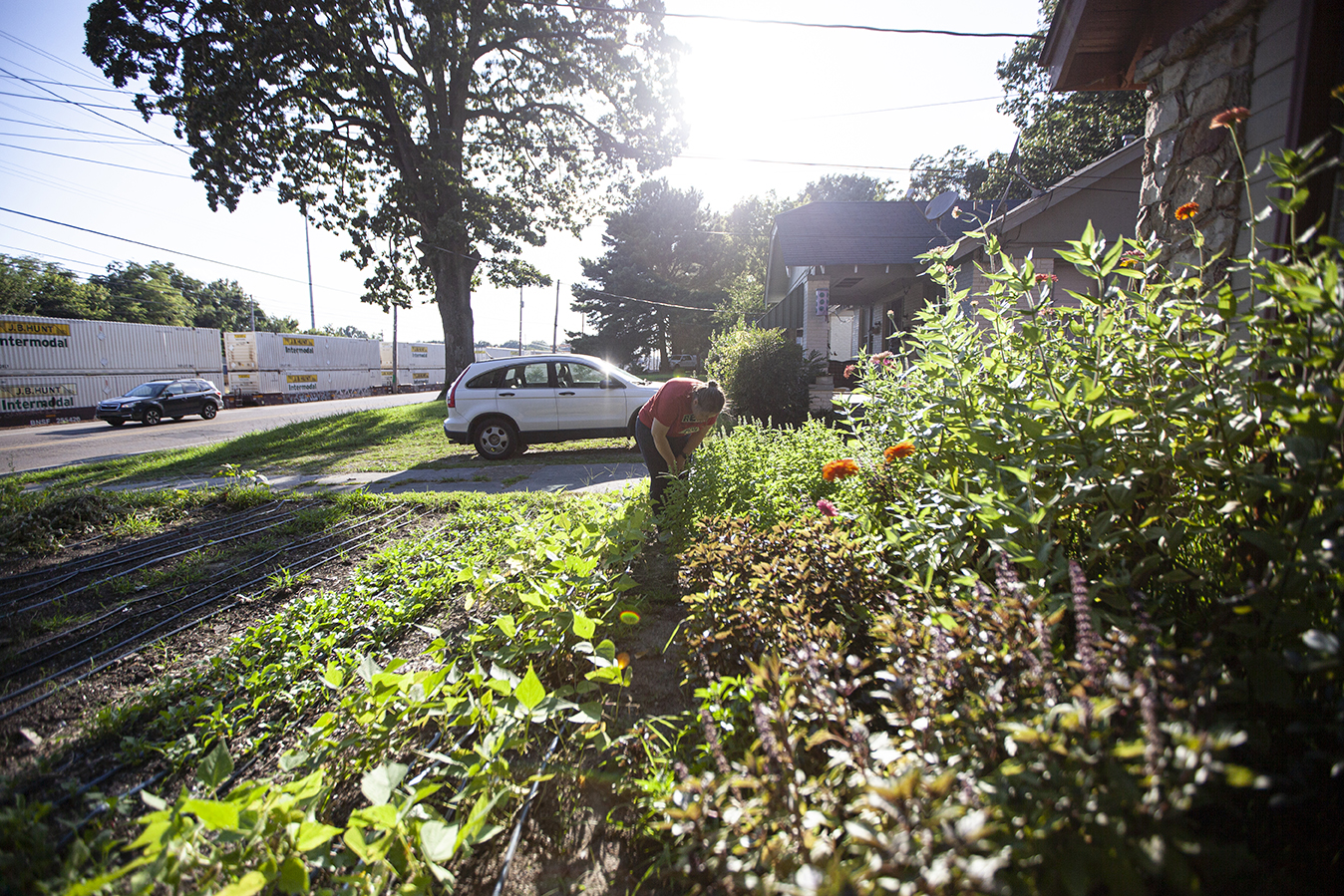 Renée and Adam decided to move their entire farming operation to a three-bedroom house on Southern Avenue, directly across the street from a rail yard.

“The name Rolling Along Farms makes even more sense as we now live across the street from a train,” Renée notes. 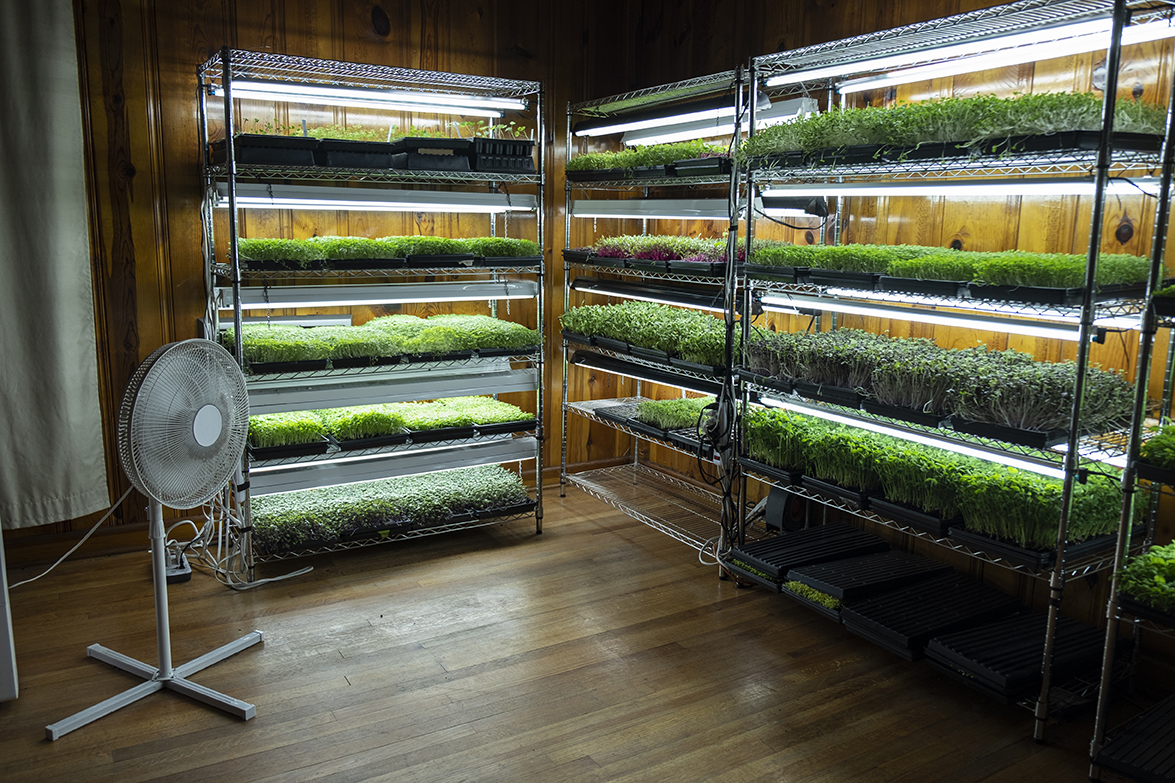 Adam says they never had a big farming plot. “We had our front and side yard planted in Henning,” he says. “Now we have a spare room inside of our house for the microgreens that is about 15 by 15. Our back lot is under a quarter of an acre.” In their front and back yards, they’ve planted leafy greens; herbs; root crops; Asian varieties of bok choy, green onion, arugula, lettuce, radishes, turnips and mustards; green beans; tomatoes; and squash.

Turning the Southern Avenue property into a farm made sense from a land, cost and location perspective. It is less than a mile from the Cooper-Young Community Farmers Market. 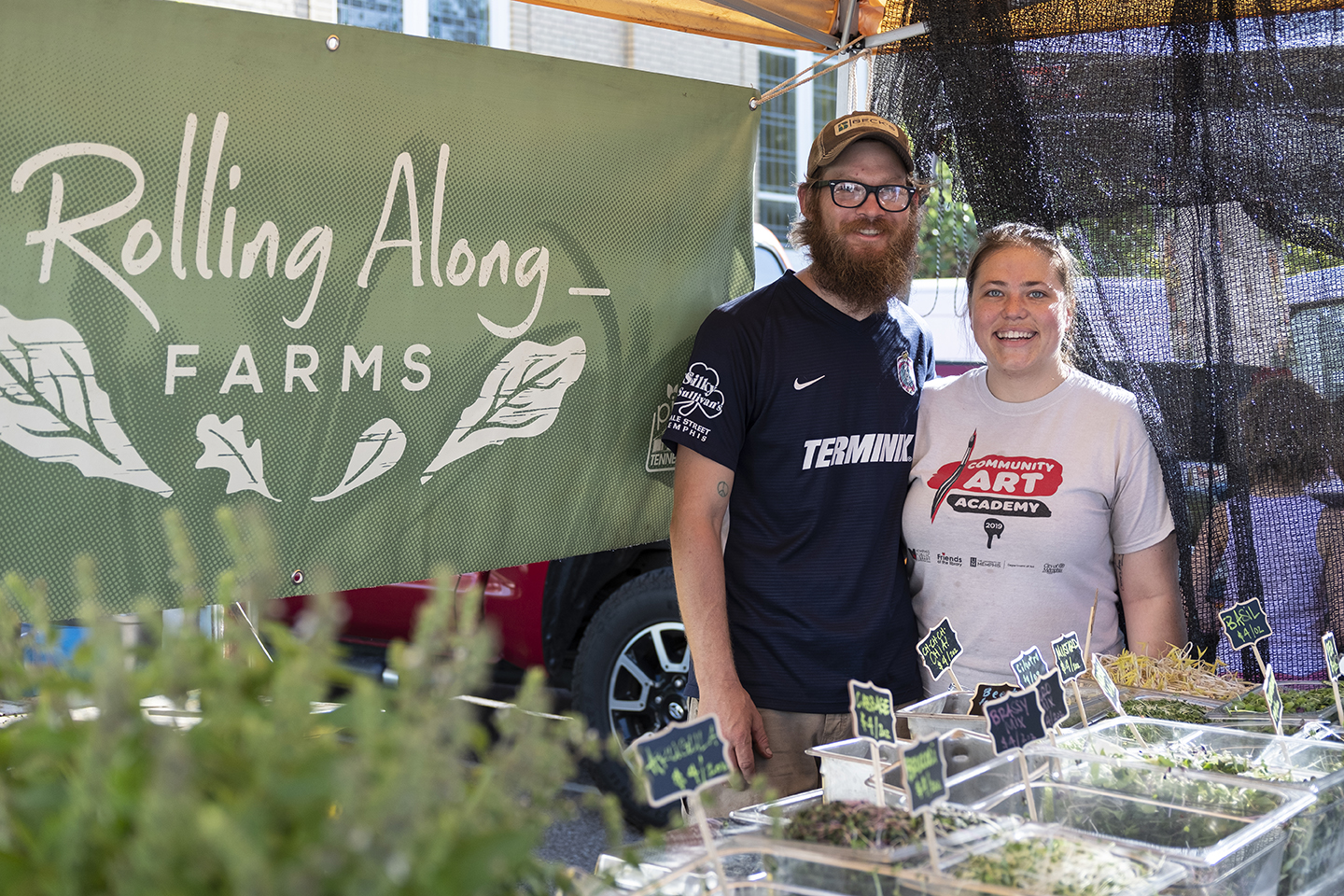 “When we decided to move markets from Covington to Cooper-Young, it was going to be during the winter market. There is not a lot you can grow all winter in our climate without some high tunnels, so I ramped up our microgreen game. It’s our best seller at market and it’s something that we can have consistently,” says Adam.

The first time they were vendors at the Cooper-Young market, they more than doubled their sales from their best weekend at the Court Square Farmers Market. Since then they have been able to quadruple their gross. Now they have regular customers who text them their orders Friday night or Saturday morning so they’ll be prepackaged and ready to go. 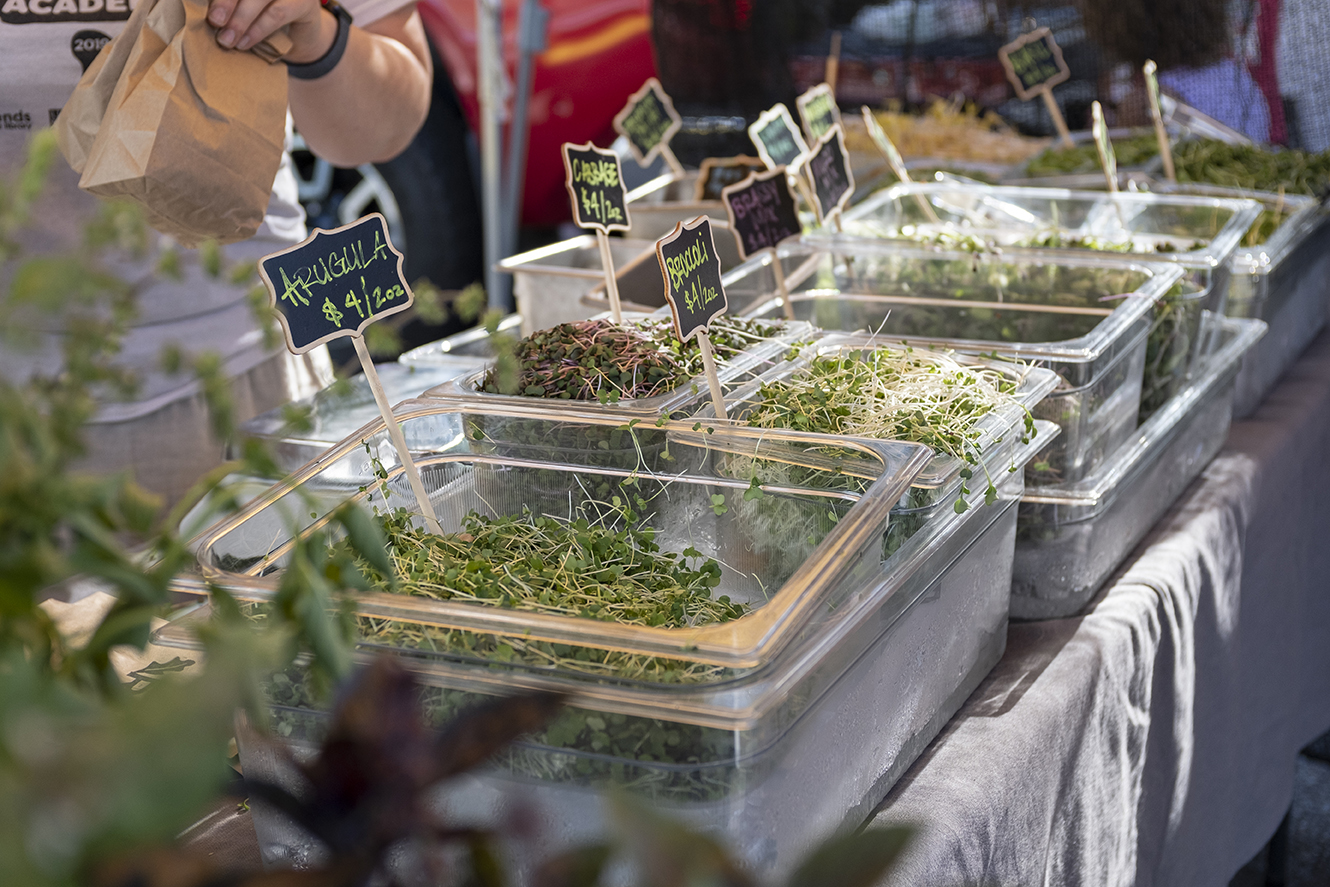 Rolling Along Farms is also building relationships with restaurants like Wok’n in Memphis and Lucky Cat. They can instantly fill and deliver a $10 order for arugula microgreens at one place, $12 worth of basil flowers at another, and $20 of sunflower microgreens at yet another. “We can fill a void for restaurants outside of their normal delivery days,” Renée explains. “It helps keep their costs down.” 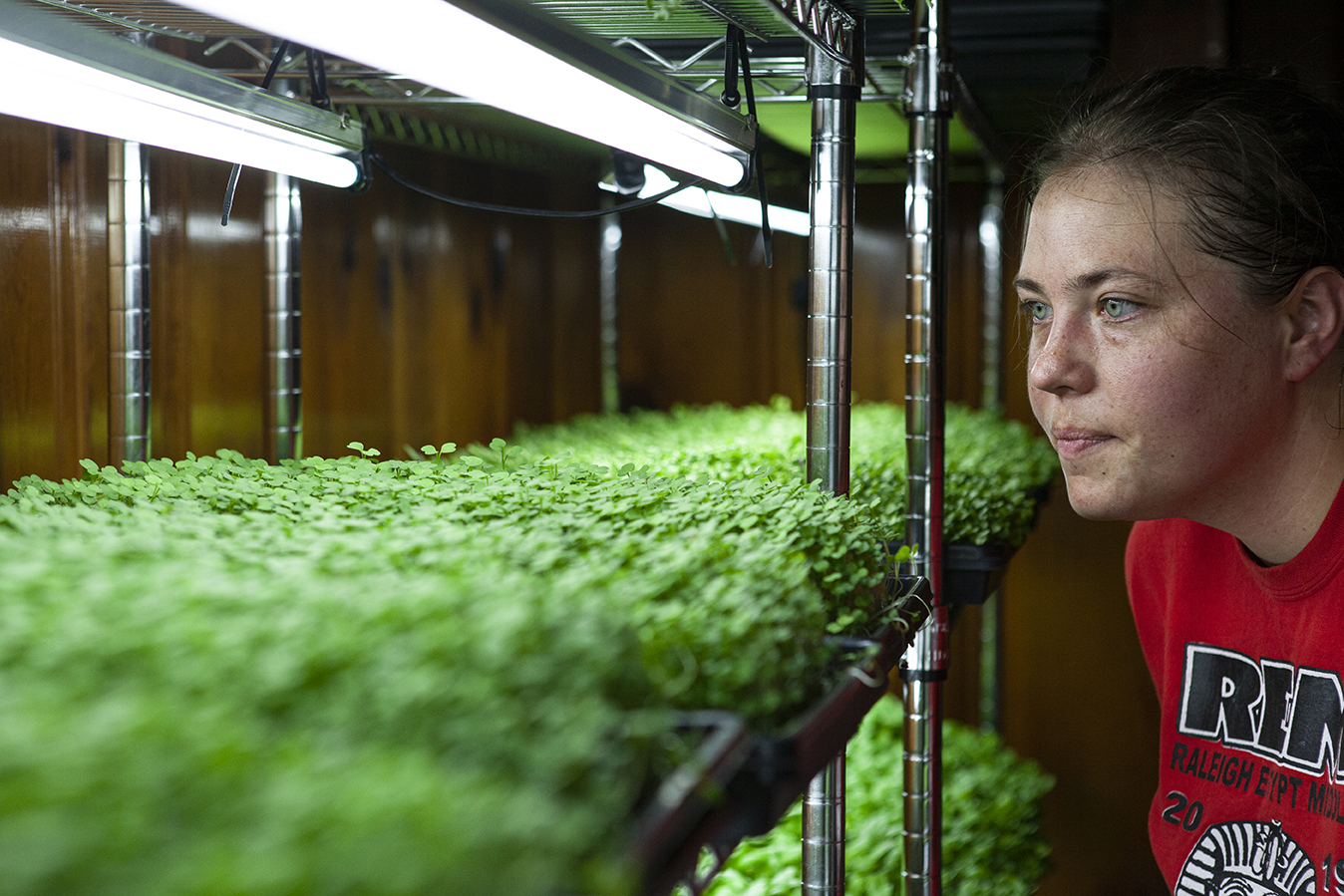 Renée and Adam work full-time jobs, while growing their farming business at night and on the weekends. (She’s an art teacher at Raleigh-Egypt Middle School, and he’s a horticulturist at the Dixon Gallery and Gardens.)

“Being self-sustaining is the goal,” Renée says.

She estimates that they are two years away from making “self-sustaining” a reality.

Of urban farming, Adam says, “It just makes sense because there is so much space available.” The community aspect of urban farming is something that has become very important to him and Renée. A new passion project of theirs is to help others to grow an additional acre of food on plots across the city. Something they learned from their CNG certification experience is that they do not want to hoard the information they have gained. “There are just too many people that have to eat,” Renée says.

“There is a place for everybody. If we help each other out, then we all succeed.”

Visit Renée and Adam every Saturday morning at the Cooper-Young Community Farmers Market. Ask Renée about how she has perfected using their mini microgreen hedge trimmer. Ask Adam about his Salvador Dali tattoo. Talk to them about just about anything, and you’ll be glad you did. 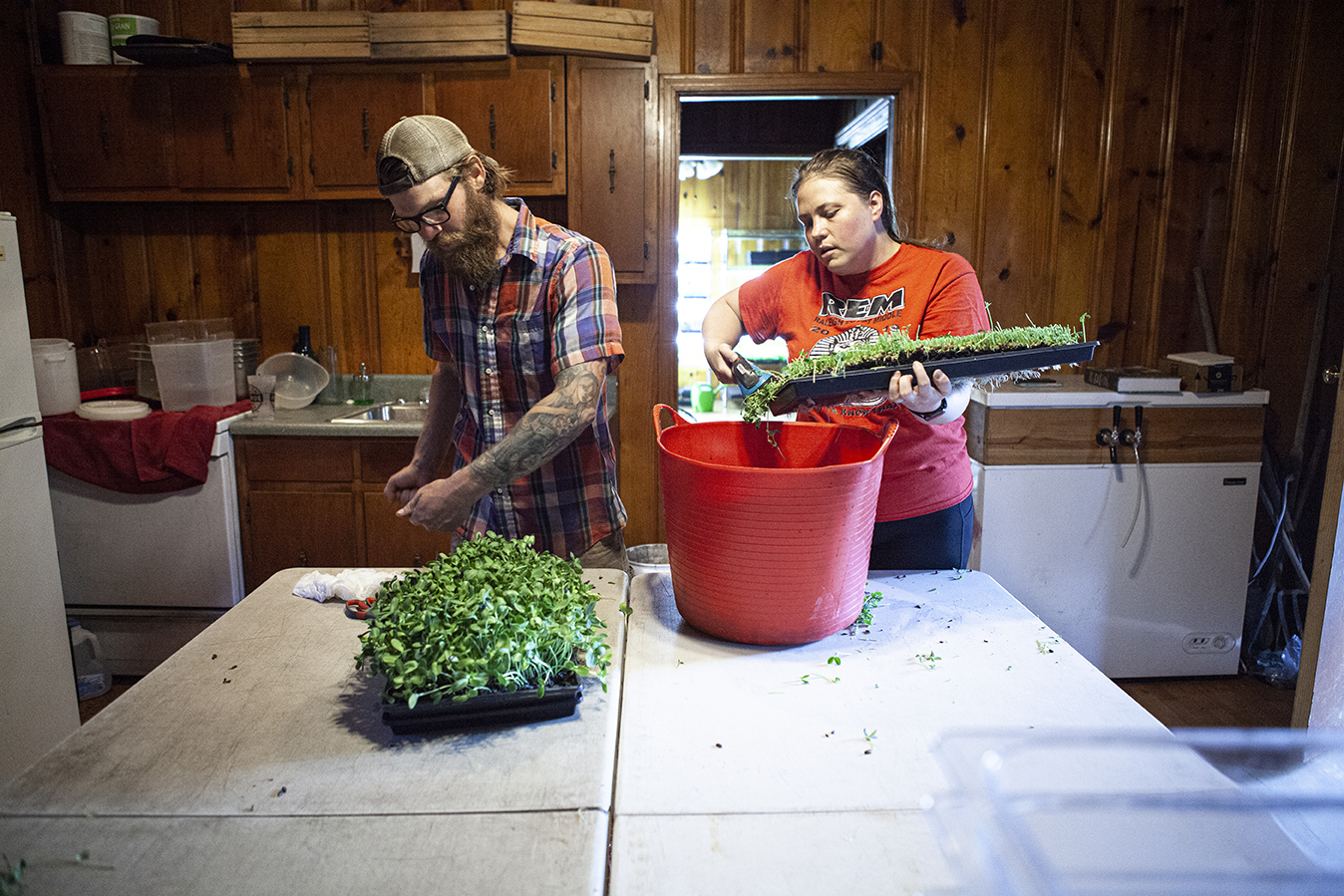 Most microgreens mature around 10 to 14 days. Others, though, may take more or less time. For instance, sunflowers mature in seven days and cilantro can take 21 to 30 days. We also grow mung bean sprouts, which grow in the dark for seven days.

Microgreens can be grown for flavor, nutrition and their striking visual presentation. Most are very rich in potassium, iron, zinc, magnesium and copper. You can use them as a garnish in soups, salads and places where you would normally use lettuce, like on tacos and in sandwiches.

Here’s a look at what we’re growing and what they can be used for.

Amaranth
Earthy, almost beet-like flavor. Bright red in color, it is mostly used for its striking visual presentation. Great as a garnish.

Arugula
Tastes just like arugula—peppery and spicy. Good anywhere you want to use arugula, like pizza and soups. Garnish with flavor.

Basil (Italian, Lemon and Dark Opal)
Tastes just like basil. Use anywhere you would basil. Good in a caprese salad.

Broccoli
Has a taste similar to broccoli. Very high in antioxidants. Good in salads, sandwiches and burgers.

Cilantro
Tastes more pungent than full-leaf cilantro. Use anywhere you would cilantro.

Pea
Leafy with a sweet flavor similar to that of English peas. Good where lettuce would be used. Also a good base for our Micro Mix, which is a good microgreen salad. You can make a pesto with this one as well.

Popcorn
Grown in the dark to maintain its blanched, white appearance. It’s sweet and earthy, like sweet corn.

Purple Cabbage
Similar to cabbage in flavor. Good on sandwiches, burgers and soups.

Purple Radish
Spicy hot flavor much like a full-grown radish. It is also purple, so it adds to the visual presentation of dishes.

Sunflower
Very high in protein with a sweet nutty, flavor. Good for garnishing. You can also make a pesto with this one.

Swiss Chard
Great in soups and salads. The bright yellow stem adds a pop to any dish.

Dwayne Butcher is the director of digital content at Rhodes College. He spends a lot of his time with his wife taking pictures of their worthless cats. @dwaynebutcher

Breezy Lucia is a Memphis transplant from Kansas City, Missouri. She’s a freelance photographer and filmmaker living in Midtown. @breezylucia