Farming is one of those professions—if you don’t know anyone who does it for a living, or no one in your family is carrying on with it as part of a multi-generational tradition, it’s easy to have a sort of candy-colored notion about what all it entails.

You might think that it’s a storybook kind of Americana, comprised of the tinkle of cowbells in the distance as they graze, the sight of a bright red barn and a silo, the smell of fresh hay… You get the idea. But the reality is much more grueling and demanding of a commitment than is probably in the average person to make. And running a farm is as much about operating as a quasi-CEO as it is all the things you might imagine the life to entail, like the early mornings of feeding animals and watching over their health. 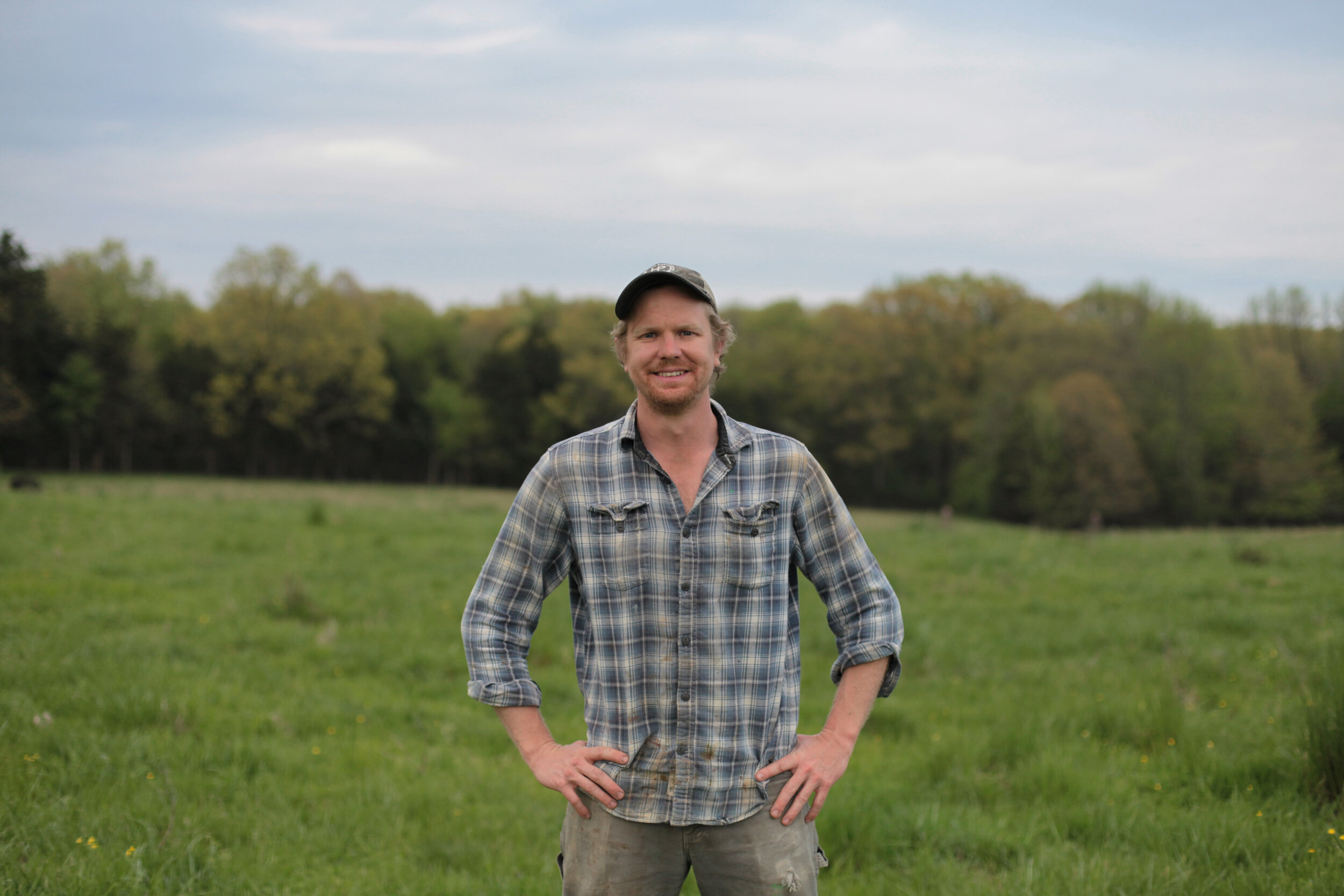 Take Home Place Pastures, a fifth-generation farm in Como, Mississippi, about 40 miles south of Memphis. President and co-founder Marshall Bartlett offers an almost wonky description of just how it is that one goes about making a success of a farming enterprise, especially one like his that focuses on certified-humane, pasture-raised pork and grassfed beef and lamb. The beef on this vertically integrated farm is grassfed, meaning the animal’s diet doesn’t include corn or any kind of grain supplement—the management of which requires a pretty intense level of knowledge, dedication, and patience. 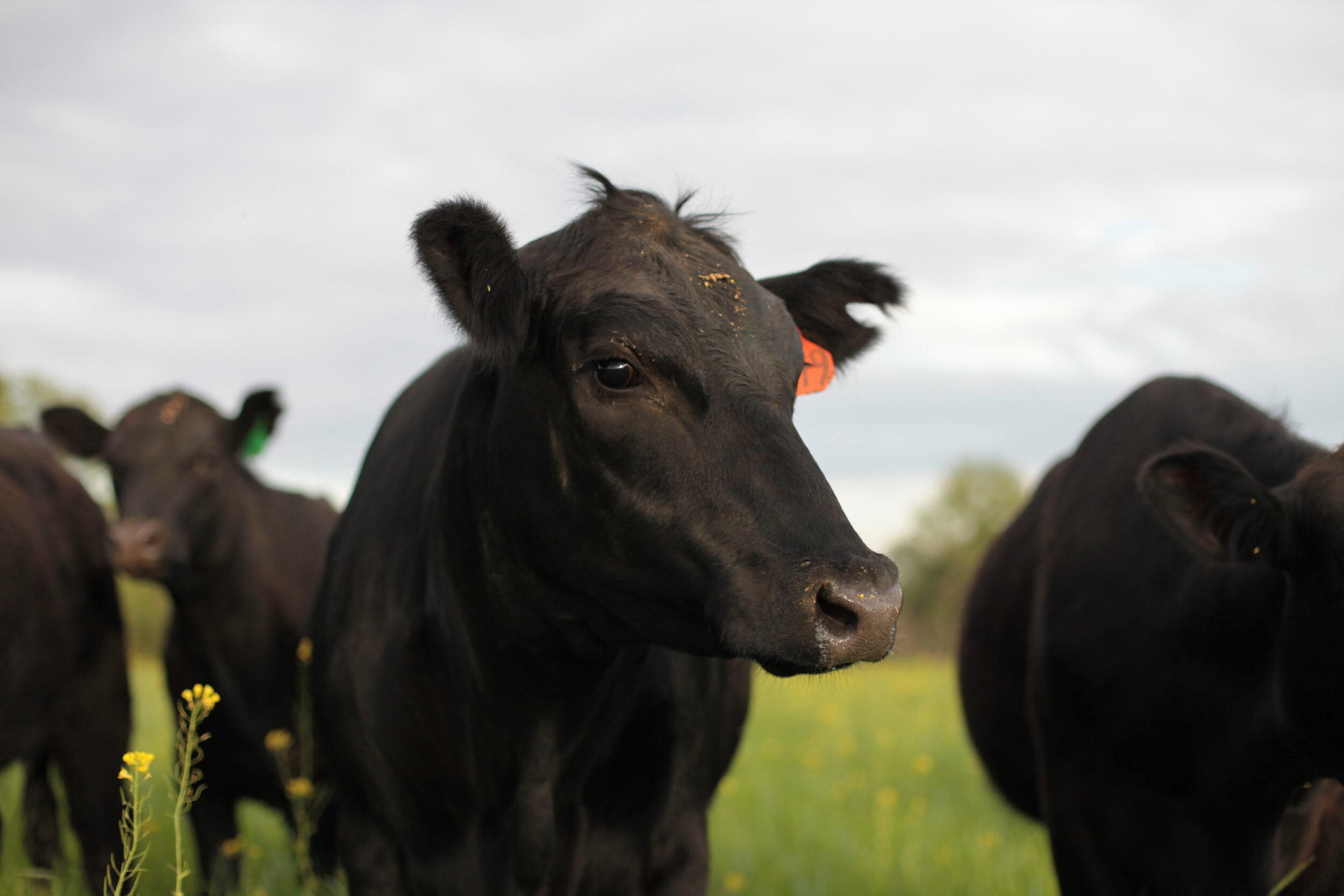 “If you’re managing forages year-round to finish cattle, you’re having to be really knowledgeable about the interplay between your soil, your plants, your animals, and the ruminants you’re managing,” he says.

“And you start to look at your whole farm as an ecosystem. As a loop of inputs and outputs.”

The devoted farmer, in other words, is managing what animals eat and how much, how that gets fed back into the soil, the plants grown on the farm, the animals’ health and proximity to each other, and so much more. 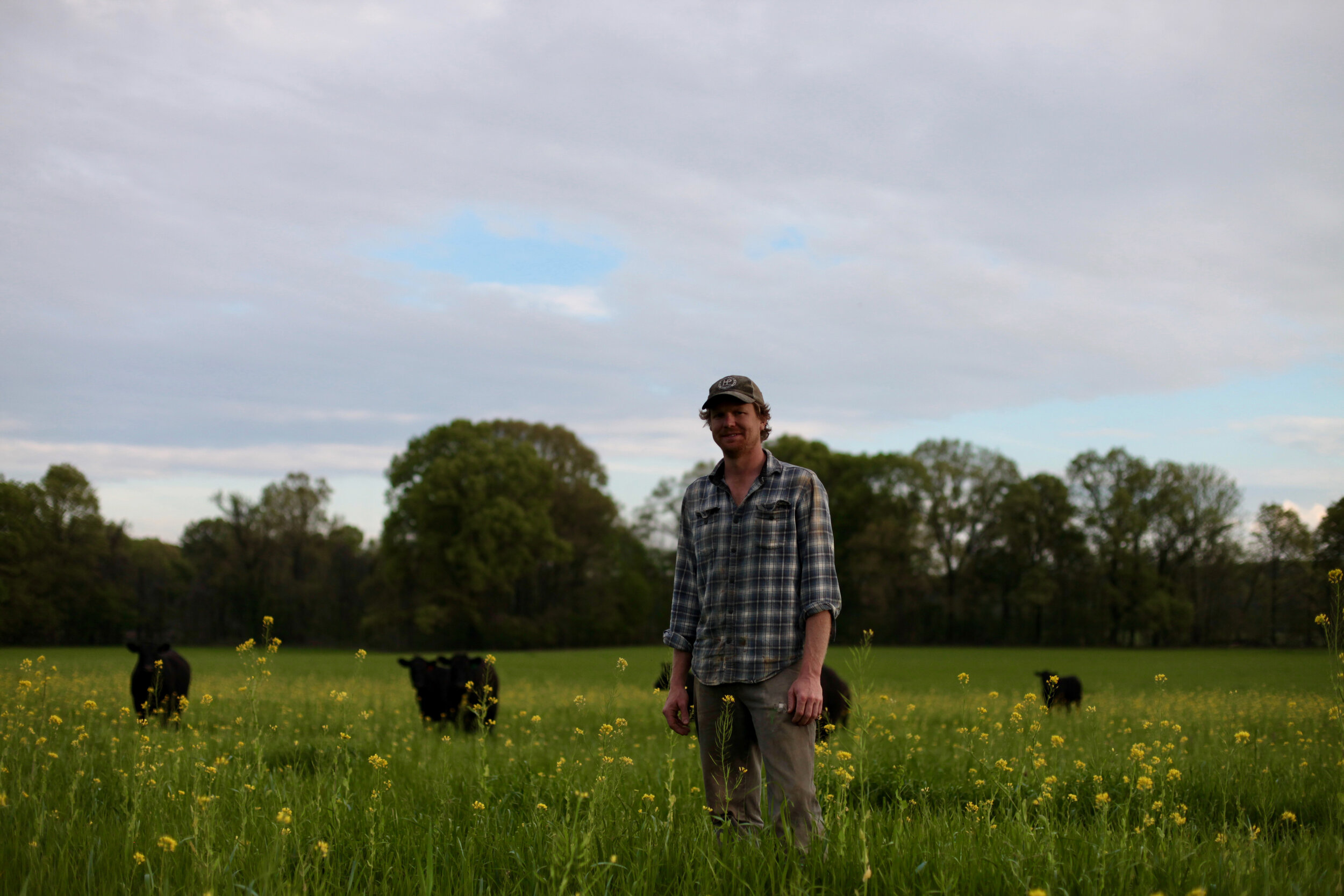 Drive out to the country, maybe deep into Fayette County and even beyond—when a trip might convey you past all those rolling green fields—and try if you can to imagine what must be required to farm all that land you see around you. Chances are, the importance of the grass those animals eat and how they eat it (and when in their life cycles they do so) probably has never occurred to you. Thing is, there’s a lot about modern farming that’s like that—that’s little understood by the outside world while occupying a place of supreme importance in the scheme of things for the owner of a farm. A great example is the practice of raising a farm’s animals on a grassfed diet, versus corn, grain, or some alternative.

Running an operation like Home Place Pastures means needing to stake out where a person stands on the notion of grassfed versus grain-fed beef—which the farmer prefers, an understanding of why it’s important, and the consequences of choosing one over the other. 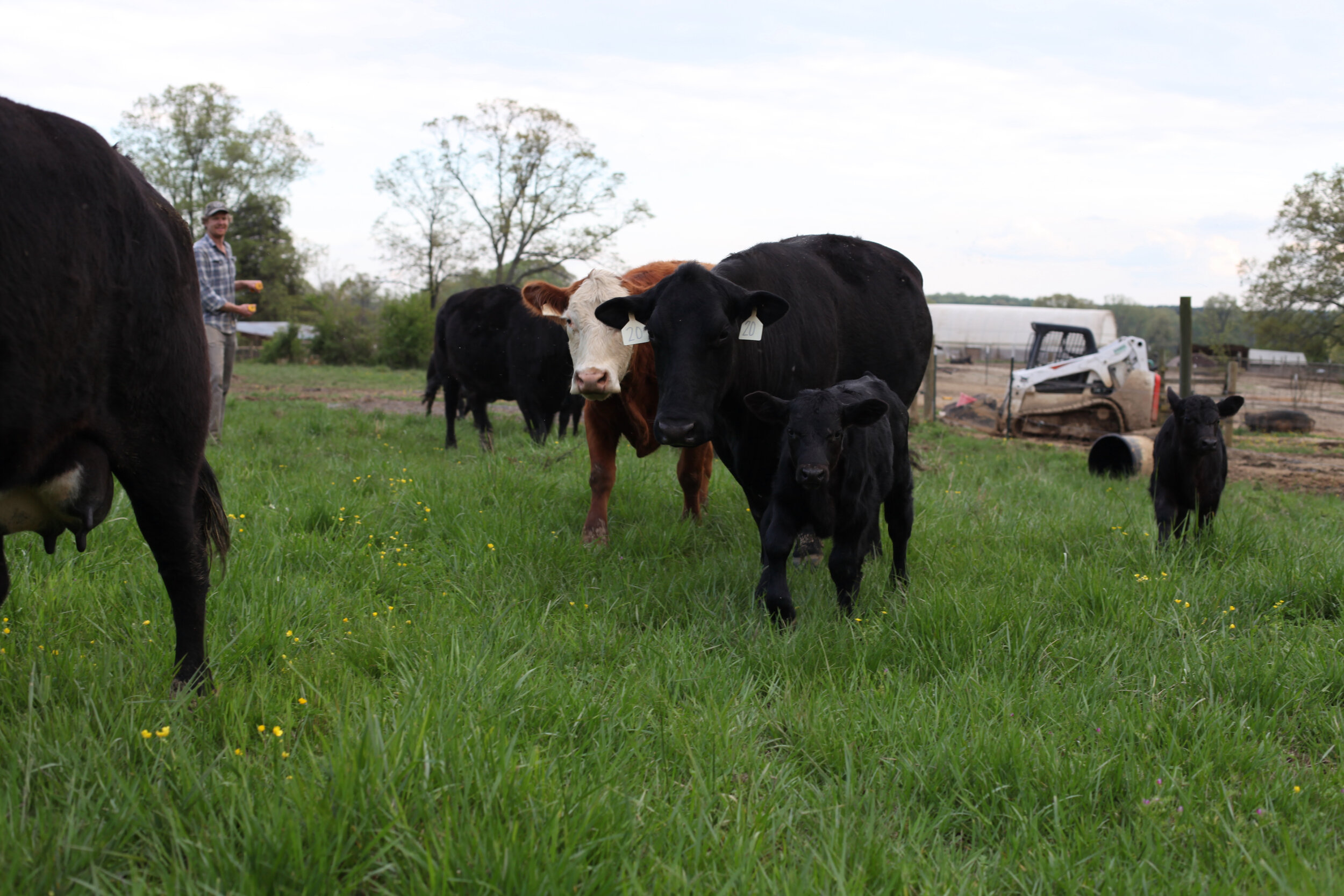 “It’s really an environmental, land-management concern for us,” Bartlett explains.

“If you’re feeding your animals grain that you’re bringing in, that’s an input from the outside that they’re depositing through manure into the pasture. But you’re really sort of cheating, in that you don’t have to have the knowledge of the soils and the grasses to sustain those animals and create that closed-loop system.

“Grassfed cattle is so important to me because it allows me to farm the way I want to farm to enhance my soils and my land. And I think it matches up with what nature had planned and how these ruminants evolved over time to be sustainable contributors to an ecosystem. I think it makes (the animals) healthier and then creates a product we can market based on those principles, which also has a unique, very different flavor that’s much more complex and interesting and reflects the seasonality of what we do. And we can get a premium for it.” 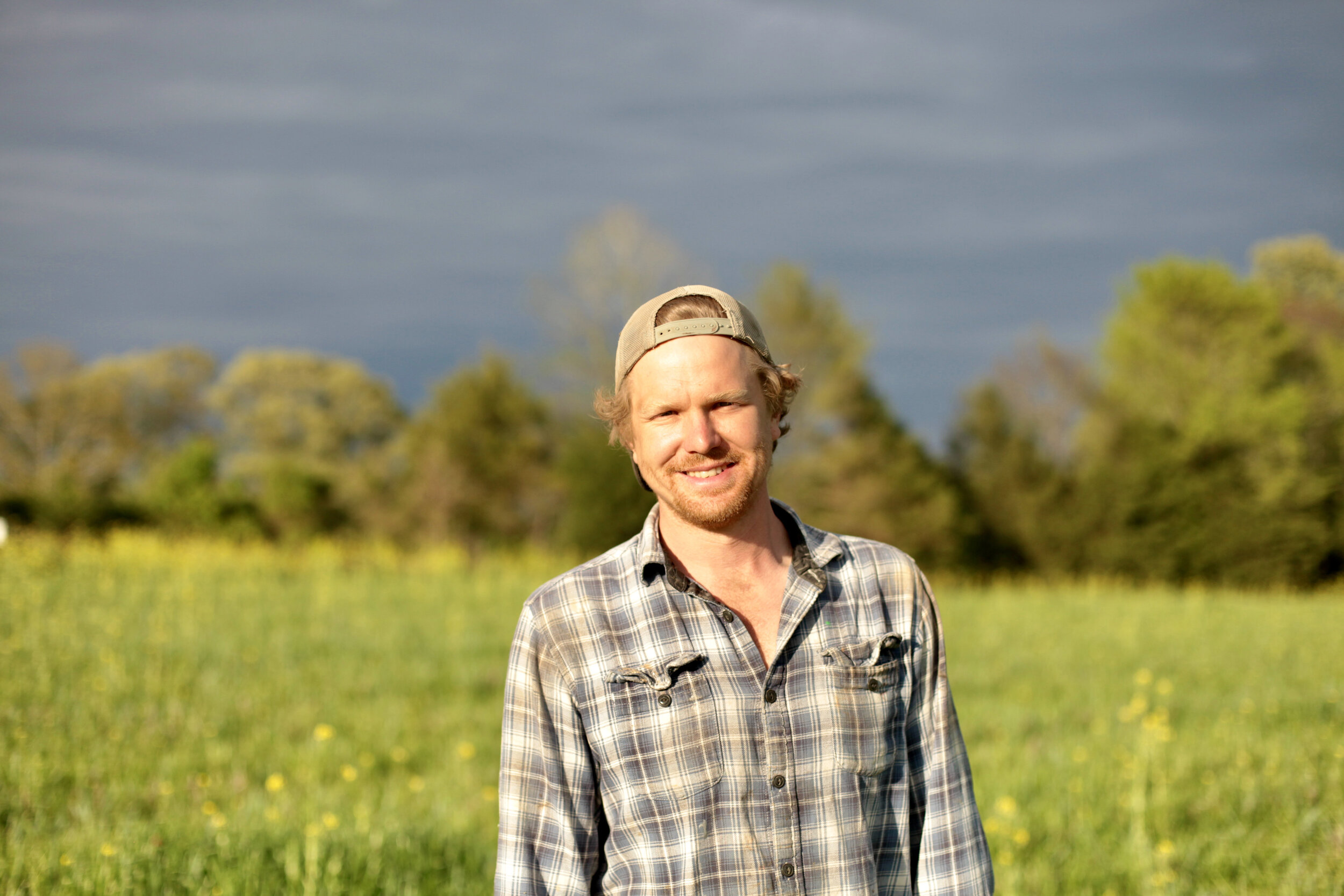 Along these same lines, we talked to proprietors of several other local farms about where they come down on this same practice and why they, too, think it’s important—and, especially in light of a greater awareness of climate change and an interest from consumers in sustainability, why they think the general public should bother to care.

For some context, here’s a number to think about: The market for grassfed beef, according to market research firm Technavio, is projected to balloon by a little more than $14 billion over the next four years. That’s thanks to the continued efforts of farm owners like Peter Schutt, who explains why more farms like his are going this route, of raising grassfed beef for reasons that include, well, that it’s better for the environment and for the animals, for a start. 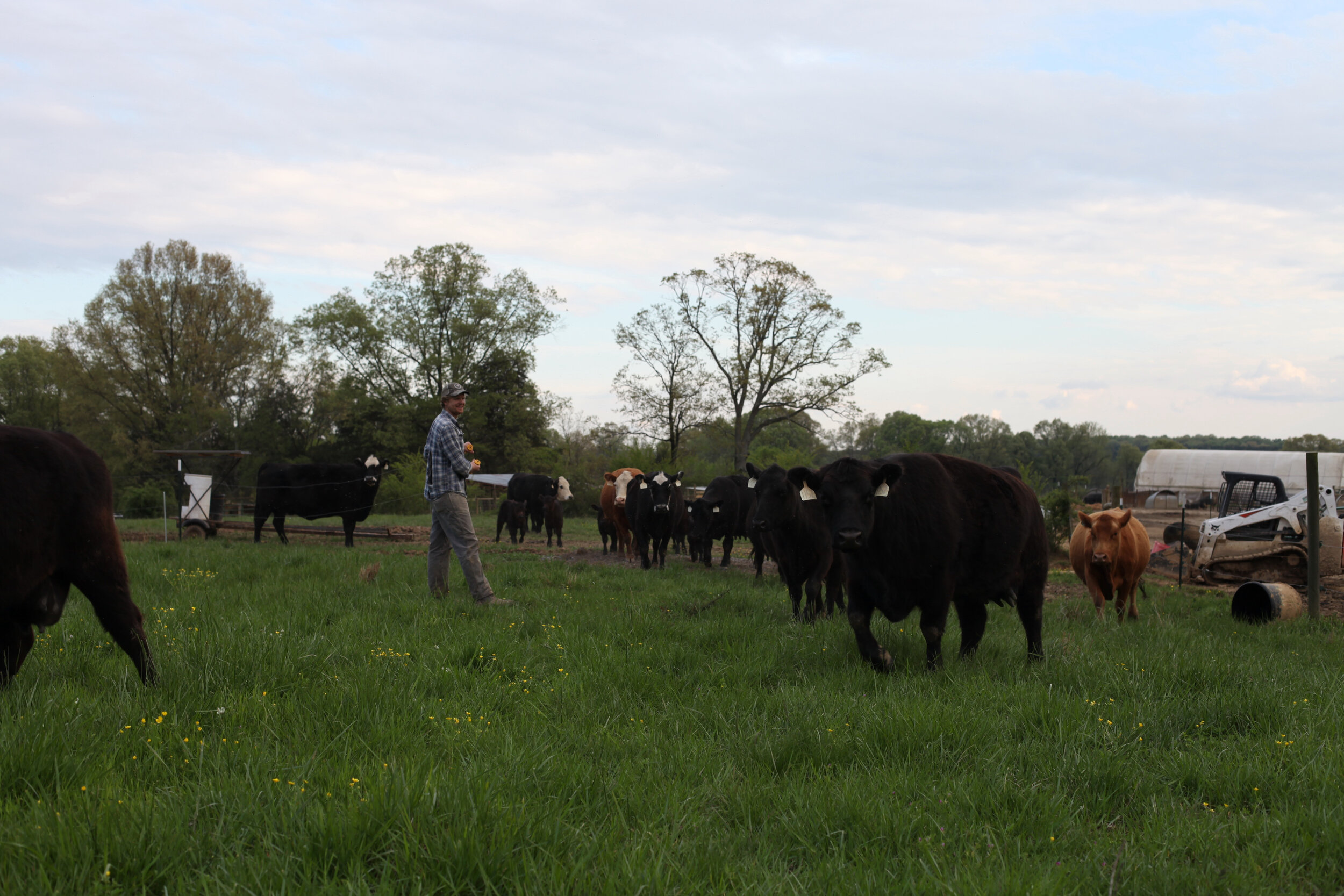 His farm, he says, produces beef cattle that are always eating grass. “Cattle are not made to digest grains such as corn, since they evolved from animals that have grazed on wild grasses for millennia,” explains Schutt, the owner of Winchester Farm. “We go against the grain, so to speak, since 99.9 percent of beef cattle in the U.S. are finished on feedlots, mostly in the West and Midwest, where they are fed nothing but corn for the last few months of their lives.” Because of that unhealthy diet, not to mention the fact they’re crowded together in manure-filled paddocks, the animals pick up things from each other, including germs that make them sick. Which means they need to take in the same things we do when we get sick—antibiotics. 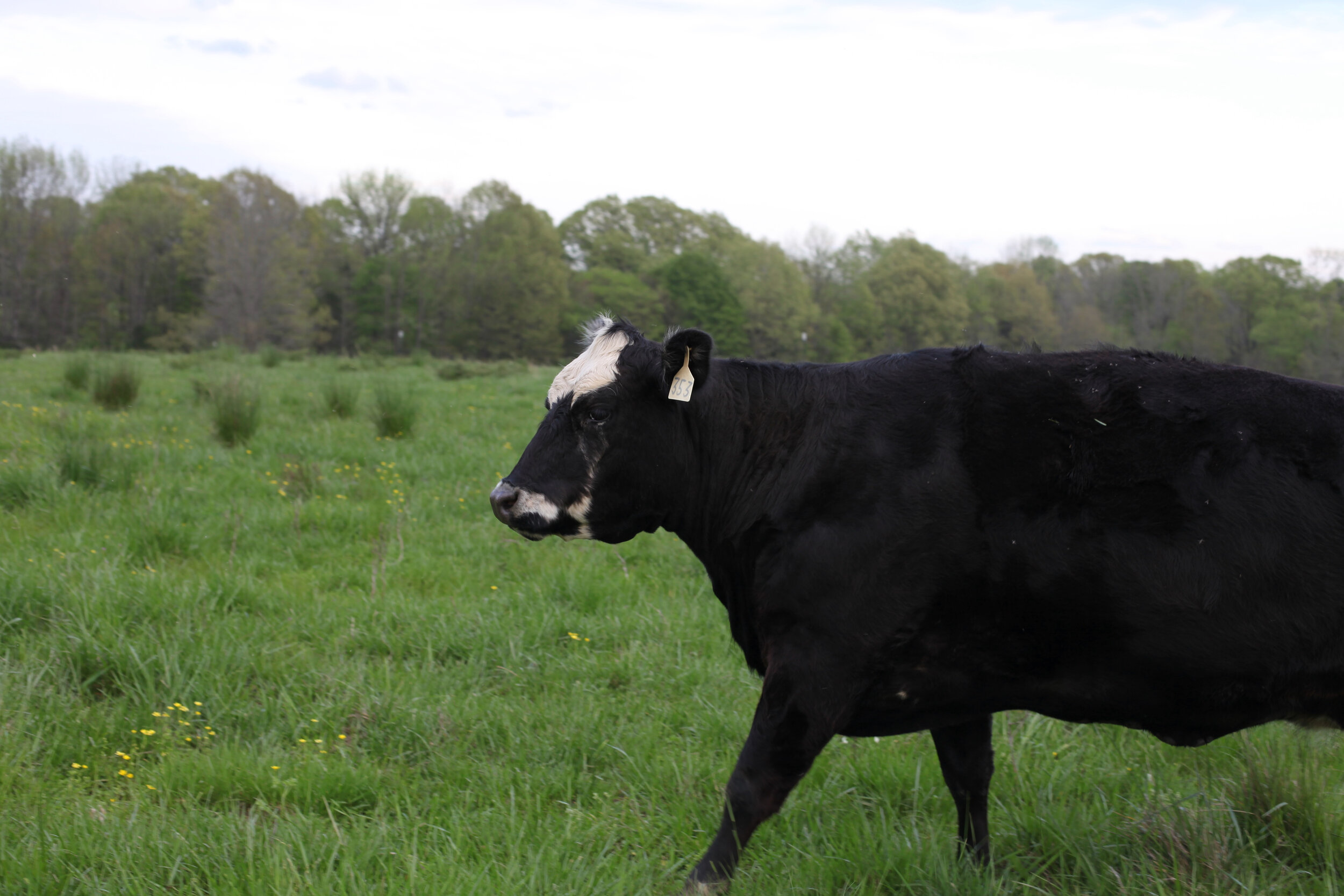 Most of them get steroid patches behind their ears to speed up growth. “The cycle of feeding beef cattle in feedlots is terribly unsustainable and bad for the environment,” Schmitt continues. “It requires animals to be hauled by truck or rail, often from great distances, and the feed also must be hauled from great distances. This, then, becomes part of industrial agriculture, wherein huge fields are planted in a single crop, and that crop—say, corn—is then grown for animal feed, usually requiring the use of GMO seed and plenty of herbicide and sometimes pesticides.”

Mike Russell, the co-owner of Half High Beef in Piperton, Tennessee, says his operation switched to grassfed beef about three years ago for reasons similar to those of Winchester Farm. Moreover, he says, consumers should care about whether farms do this because it entails better overall treatment for the animals, it’s more environmentally friendly, and it results in a better product overall to enjoy.

If you’re a person who thinks much about the meat you consume, you may have heard another term: grass-finished. Depending on who you talk to, you’ll either hear that grassfed and grass-finished are indistinguishable or split by the smallest of distinctions. The technical difference is that grass-finished beef is the product of cattle that’s fed only on grass and forage all its life. Grassfed, as you might imagine, removes that “finished” qualifier, referring to a diet of grass for most of the cattle’s life before it’s switched to a grain-based diet at some point.

“The USDA actually doesn’t recognize a difference—you couldn’t label something as grassfed unless it’s also grass-finished,” said Russell, whose farm has been in his family for six generations now. It was an egg farm into the 1990s, and the family does a lot of real estate development now, but parts of the farm are still totally agricultural.

“About three years ago, I decided I wanted to do grassfed beef,” he said. “I’d done the traditional beef before and saw a lot of things that could be improved upon.”

He brings up the same concerns as Schutt. About how grain-fed calves get shipped to a feedlot, with the crowded conditions, the competition for corn, the ease with which germs can spread, and all the rest. “And when you do grass, none of those processes occur,” Russell says. “They’re out on the farm, on the ranch. They’re not crowded. They’re not in a smelly, stinky environment. They don’t need antibiotics, because they’re not sick.

“I see people that I consider to be normal, everyday people who I’d not have thought 10 years ago would have cared. And I think it’s because of people realizing as an industry gets larger, there’s just some necessary pitfalls. There’ll be a recall on this, or a recall on that, E. coli here, this over there, and it just makes you wonder. I see people assigning value to the old ways of doing things.”

“I think people just get it—that there’s value in knowing where your food comes from.”

According to registered dietitian nutritionist Barbara Quinn, grass-finished beef is often leaner than beef that’s been finished on grains. The grass-finished variety also tends to have higher concentrations of the good omega-3 fats, though many Americans unfortunately say they prefer the richer and somewhat “meatier” (for lack of a scientific term) taste you get from corn-fed beef.

Which leads to perhaps the best question of all: We know about the animals’ treatment in this process. Is one or another better for us?

The jury is still out on that, according to Cris Watson, the owner of Renaissance Farms. But expect more and more farmers like him to dive into this, regardless, thanks to some important trends that show no sign of slowing down.

“My wife and I started this farm 10 years ago, as a result of wanting to grow our own food, because we learned a lot about food systems and didn’t trust it,” he says.

“The reality is you’re up at 3:30 in the morning, and you’re out the door as soon as you can see. There’s some very bad days. There’s some great days. There’s a lot of great days. But it doesn’t matter if it’s raining or it’s 95 degrees or it’s snowing—your animals are not down in Texas in a feedlot. You’ve got to move them and feed them and take care of them, regardless of what’s going on. It really is not the picturesque red barn with a silo. It’s a lot of hard work, and the premium associated with the product line really doesn’t cover all of that. But there is value to having happy animals that taste really good and are healthier for you by all accounts—there should be some value to that, so that more people would do this.”

Rachel Russell is the daughter of Half High Beef owners Mike and Aven Russell. She spent weekends as a child on the farm with her grandparents, and now serves as Half High Beef’s photographer and social media manager. @halfhighbeef

John Jordan Proctor is a Memphis based photographer living in Midtown. He works full time for Home Place Pastures. @johnjproct