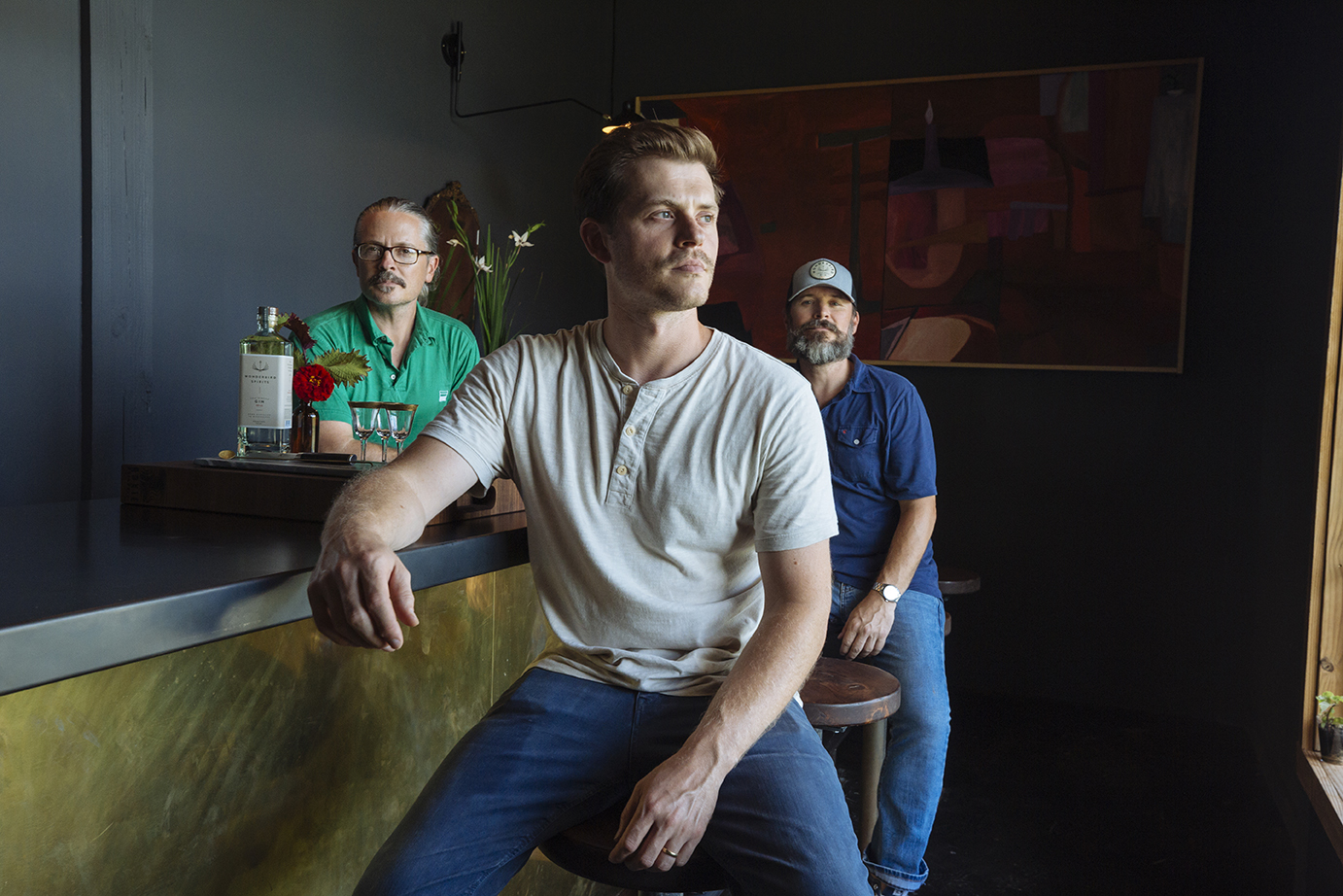 It’s a refreshingly cool June Mississippi morning as I make my way down the winding and famous Old Taylor Road just outside the bustling college town of Oxford. Home of Faulkner, Ole Miss football, The Grove, James Beard Award winners and now, apparently, gin. Once you drive through the commerce and apartment colonies that have sprung up over the years south of Highway 6, the land gives way to pastoral scenes of green pastures, rolling hills and scents of fresh honeysuckle floating on the breeze that remind me of my youth growing up in the wilds of Mississippi. If you’re caught up in the spectacle of it all (like me), one can easily miss the perpetually backlit, minimalist metal sign serving as the only marker to its true intentions—the gravel road leading to the Wonderbird distillery.

It’s a picturesque property of 20 acres set back on a slightly raised hill a few hundred yards from the blacktop of Old Taylor Road.

I am greeted at the ankles by the distillery cat, Koji, and co-owner Rob Forster in the small lot adjacent to the main building. Rob and his business partners, Chand Harlow and Thomas Alexander, are fresh off their first appearance at the inaugural Mississippi Food and Wine Festival held in Jackson the previous weekend. It’s early, but they all are enthusiastic, engaging and eager to talk about gin.

As a drink maker, I have always referred to gin as the “bartender’s workhorse.”

Its many variations, styles and unique characteristics will challenge any mixologist worth his or her salt to create inventive and complex cocktails that both showcase a person’s talent and appeal to a wide range of palettes. The gin martini is one of the original cocktails for a reason. So why distill gin? In Mississippi? In Oxford 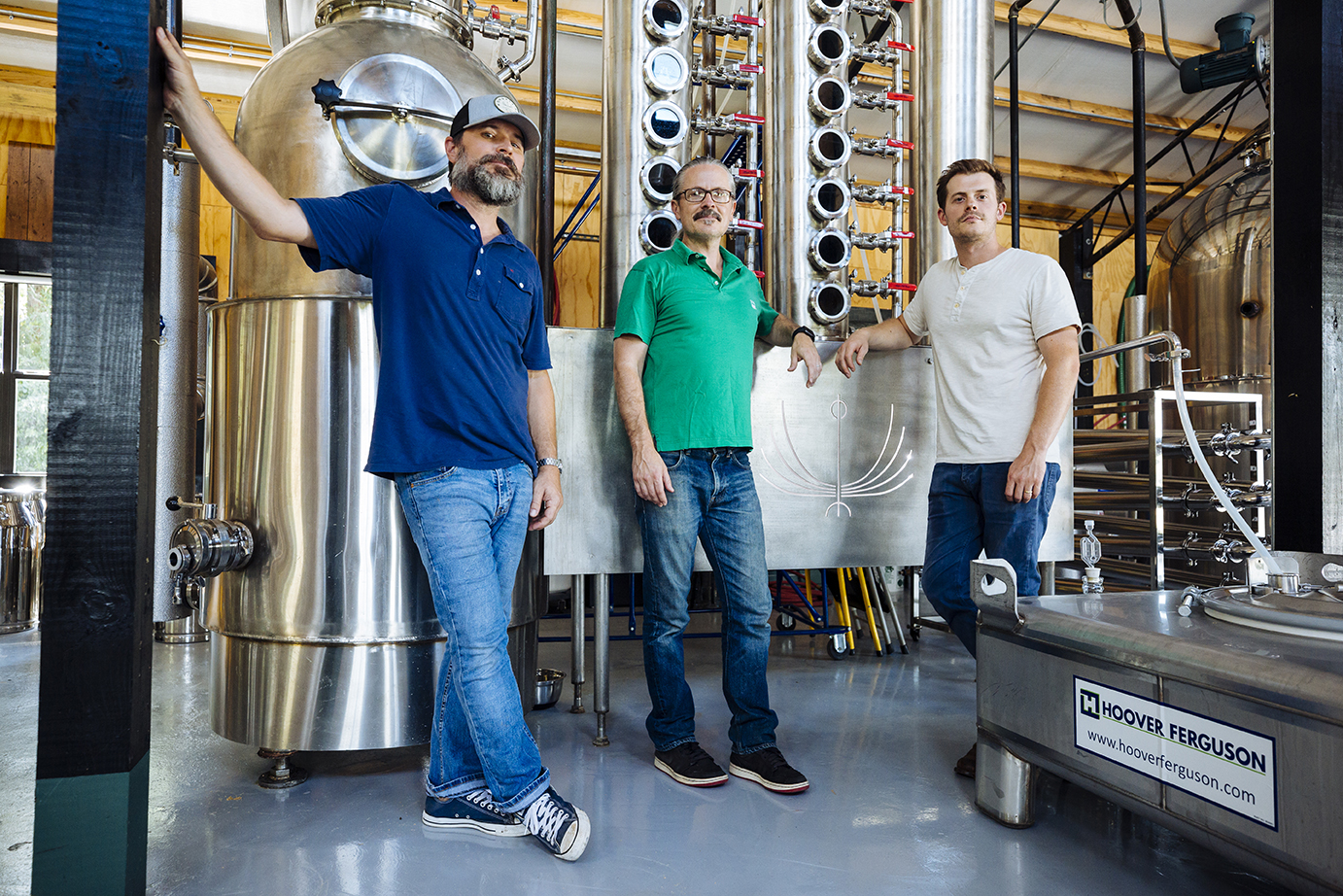 Rob chuckles when I present this question, but Chand stands in to answer. “We all had strong ties to Oxford,” he says. “I am from Laurel and my parents attended school here, while Thomas’s wife, Mandy, is an Ole Miss graduate and Rob’s father is an Ole Miss Law school alum who retired here and helped him see the quality of life the town could offer to its residents.” And of course, the absence of an existing distillery in the area gave them a unique advantage in the market.

About gin itself Rob says, ”The spirit holds an important place in cocktail history and culture and truly represents an undersized portion of spirit consumption.”

“The artistry of gin-making also held great appeal to us in that it allows a distiller a wide latitude to make a singular creation within the traditional confines of the class.”

Gin can also be produced and sold into the market within a reasonable amount of time—in Wonderbird’s case about 20 to 25 days. Other spirits like rum or whiskey must be aged for an extended period of time before they start to generate actual revenue. 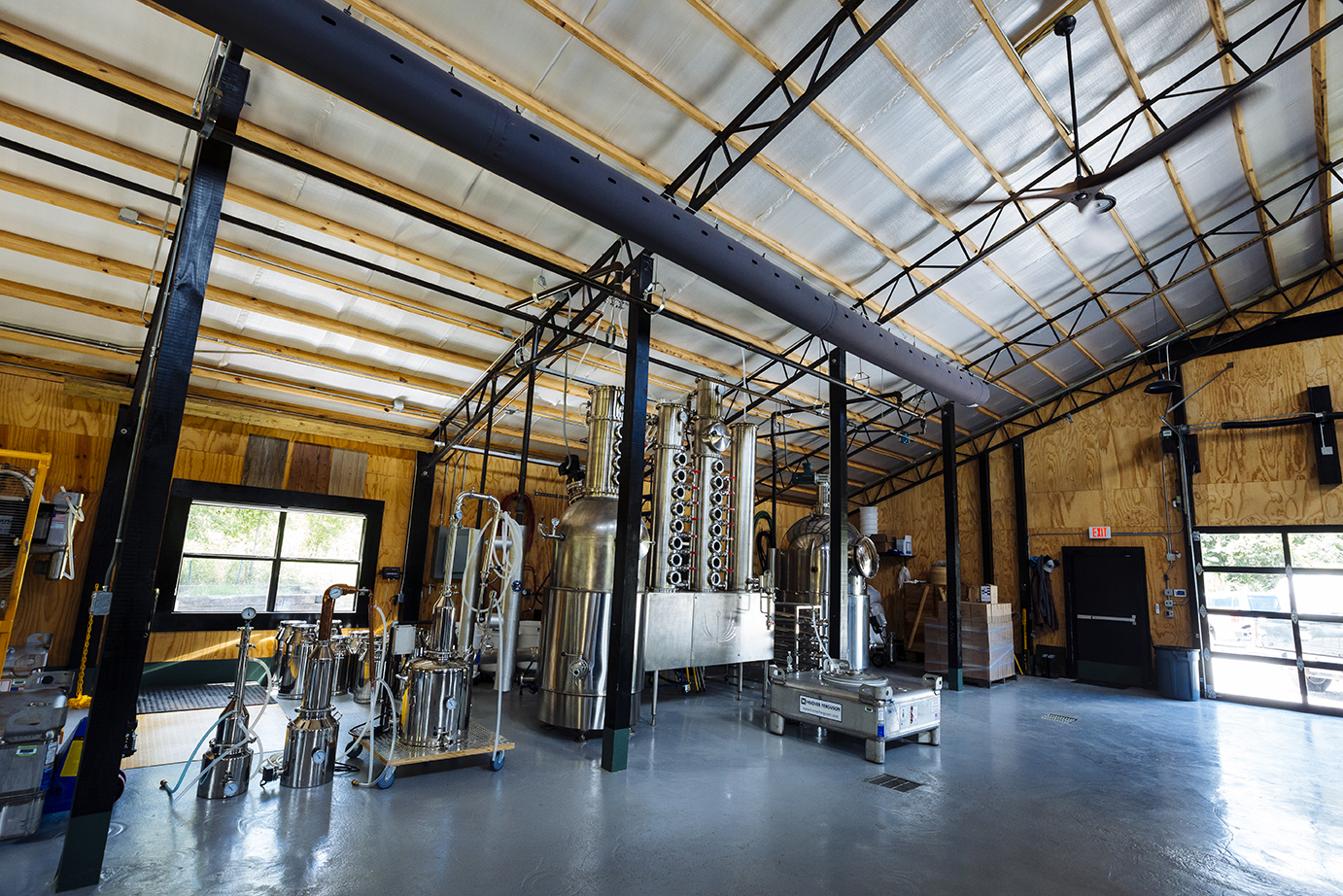 Distilled gin’s only restriction is that it must contain juniper. Aside from that, a distiller is free to experiment. Most gin produced today is made from a grain mash consisting of barley, wheat or other grain. After much testing, the Wonderbird team settled on jasmine rice from Two Brooks Farm located in the Mississippi Delta as their grain source. This is significant because their process borrows a modified sake-making approach that prepares the rice for fermentation using a Japanese mold called koji (see the cat), which is cultivated in-house and assists in pulling as much of the sugars from the grain as possible during the yeast’s metabolic process. (They are also distinctly one of a small handful of distilleries in the world and the only in the United States that makes gin using rice for their base spirit. The others are in Japan.) 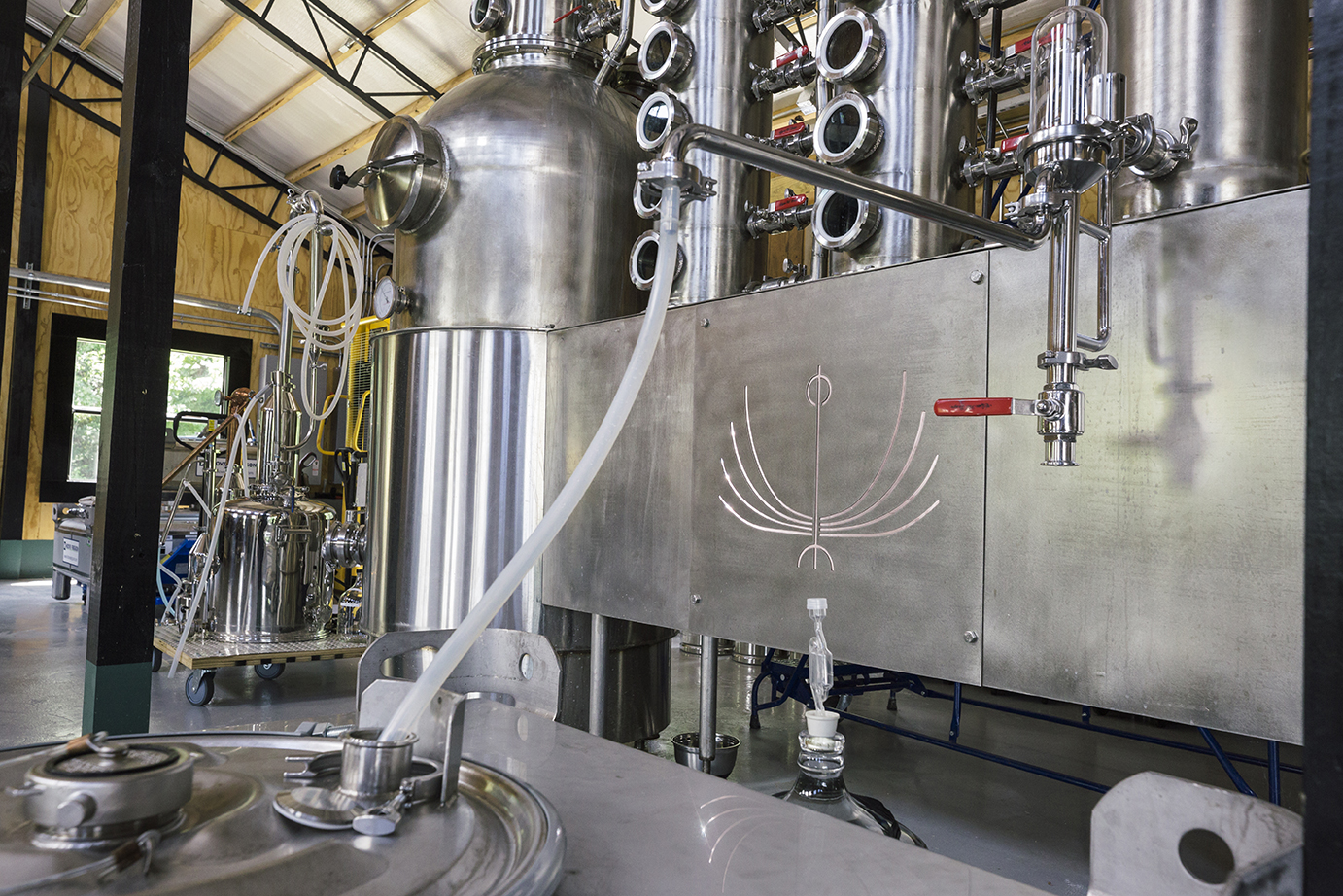 Thomas says this mixture sits and ferments for a week, after which they pump the resulting mash into their custom still and do what’s called a “stripping run,” where they strip as much alcohol from the fermented material as possible. They then collect and aggregate the alcohol from these runs in order to produce their base spirit.

Using their own unique botanical ingredients, they distill each with the base spirit individually.

This technique is designed to impart each botanical’s respective flavor and essences; distilling each alone allows them to manage the expressions as precisely as possible, Thomas explains. They are then blended by hand using a proprietary recipe before proofing the product down prior to bottling. 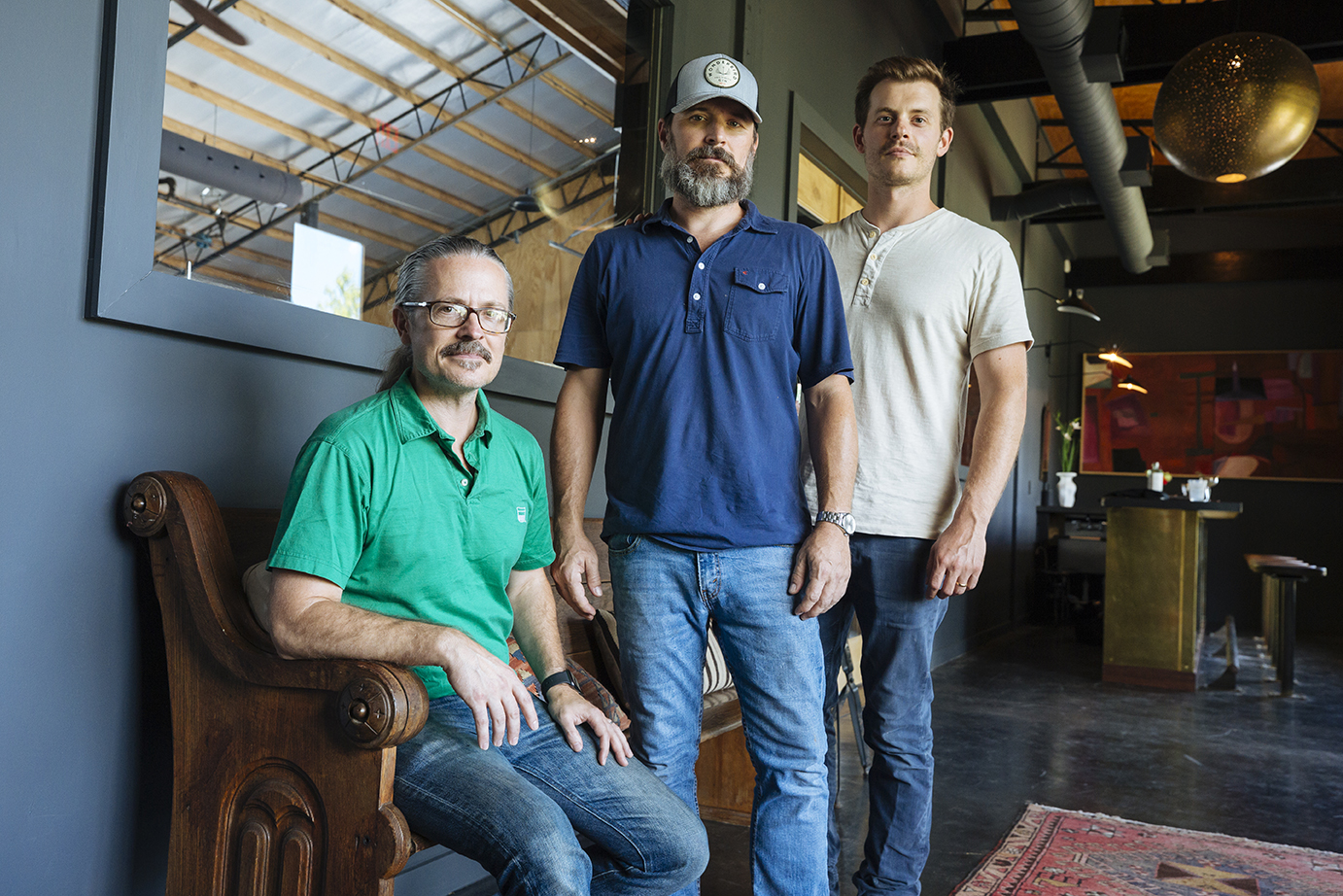 The number 61 that appears on the label of each bottle of Wonderbird gin is symbolic.

The trio have also built an extensive library of botanical ingredients, profiles and samples in order to single out and define Wonderbird’s signature character and expressions for any future renditions. In addition to this, they have employed a professional forager to appraise and survey the tract of land they own to better inform them of local botanicals to incorporate in future versions of their signature gin. The property’s abundant pine and red clover inspired the gin’s aromas and basic flavor profile.

Rob, Chand and Thomas spent nearly two years building the distillery, much of it by hand. As we finished my guided tour, which is the same as every guest receives when they visit, we gathered at the tasting bar in the lounge to sample some gin. The lounge area is an uncluttered and immaculately appointed room with tall ceilings, windows and a large front porch that faces the road and an open field. Although the lounge doubles as a workspace, it’s also a place to relax, sip some gin or craft beer and solve the world’s problems.

It’s an inviting space, and they encourage people to linger after they finish the tour.

With the size of the property coupled with the building, they are able to accommodate larger events like weddings and receptions and have hosted a few already in the short time they’ve been open.

At the tasting bar, guests sip Wonderbird’s gin straight, both chilled and at room temperature, in order to understand and appreciate its full expression. I found it to be exceptionally balanced and frictionless with just the right viscosity.

Their unique blending process allows for the botanicals to meld ever so slightly without getting in each other’s way.

From a cocktail perspective, it shines in both a traditional G&T (I use Fever Tree Aromatic Tonic Water) with a slice of lemon and makes an outstanding Gibson or dry martini.

The response to the gin has been overwhelmingly positive, as it appeals to the gin novice as well as the seasoned gin veteran. The first batch sold out in just their first week of being open to the public, and mixologists in Oxford and Jackson have also incorporated Wonderbird into their current bar programs.

Currently Wonderbird gin is only for sale in person in Mississippi—and only at the distillery and in select bottle shops and restaurants—but as they continue to perfect their distillation process and bottling operations, they do plan on branching out into other markets when the time is right. However, customers can now place orders through Seelbach’s online retailer.

Combine ingredients into a mixing glass and stir until cold. Strain into a chilled cocktail coupe and express lemon peel over the top.

Bonus: Replace the lemon twist with cocktail onions for a noteworthy Gibson.

A Day (or Two) in Oxford

The Little Restaurant with a Big Heart