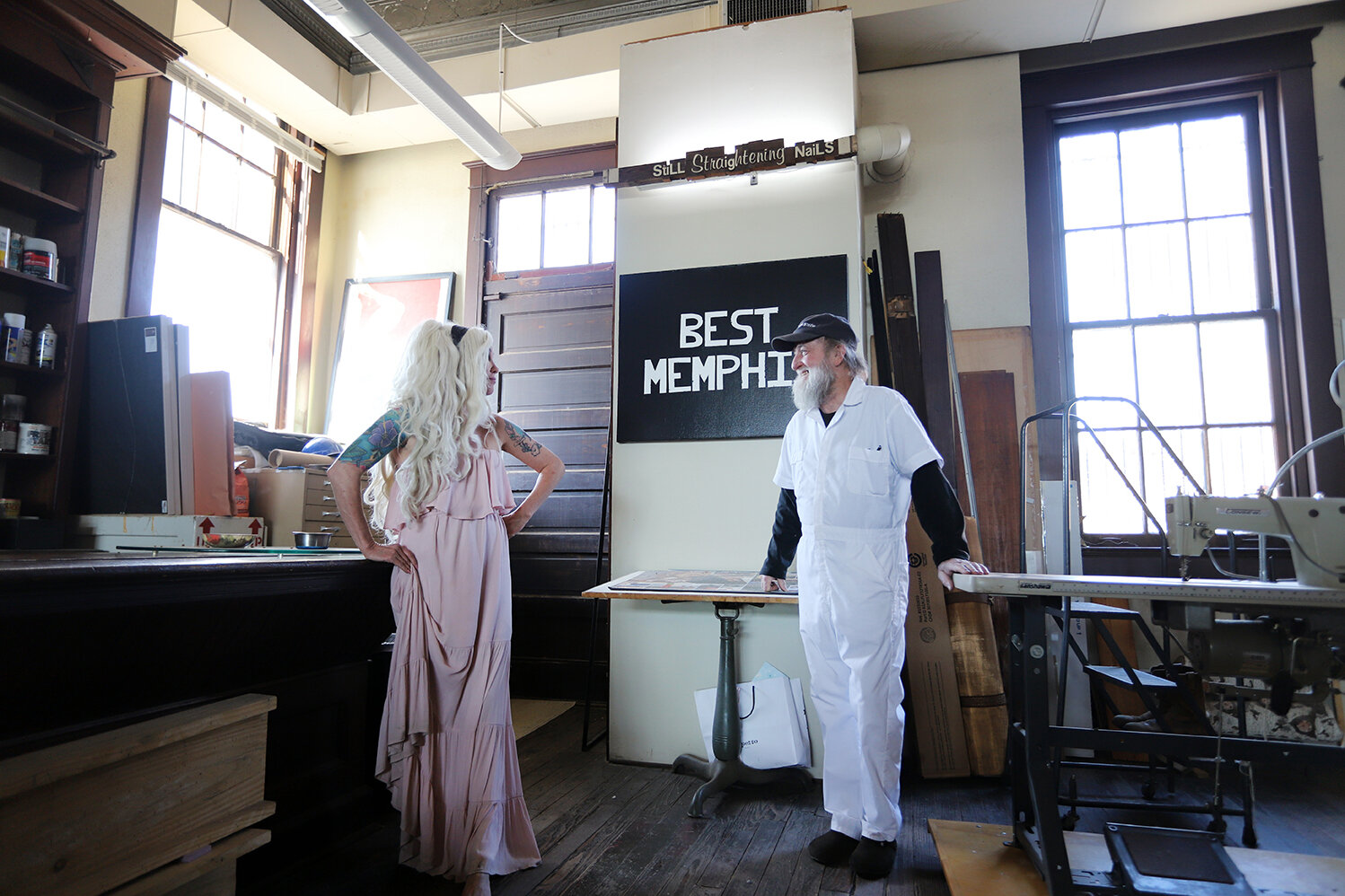 “I moved from ‘The Best Coast’ to ‘Best Memphis,’” says Ramona Sonin Myatt, who goes by Sonin.

A Memphis native, she lived in Venice Beach, California, from the late ’90s until just a few years ago, when she reconnected with (her now husband) Greely Myatt, and they bought the old Dabbs Store in West Memphis, Arkansas, to live and work in. 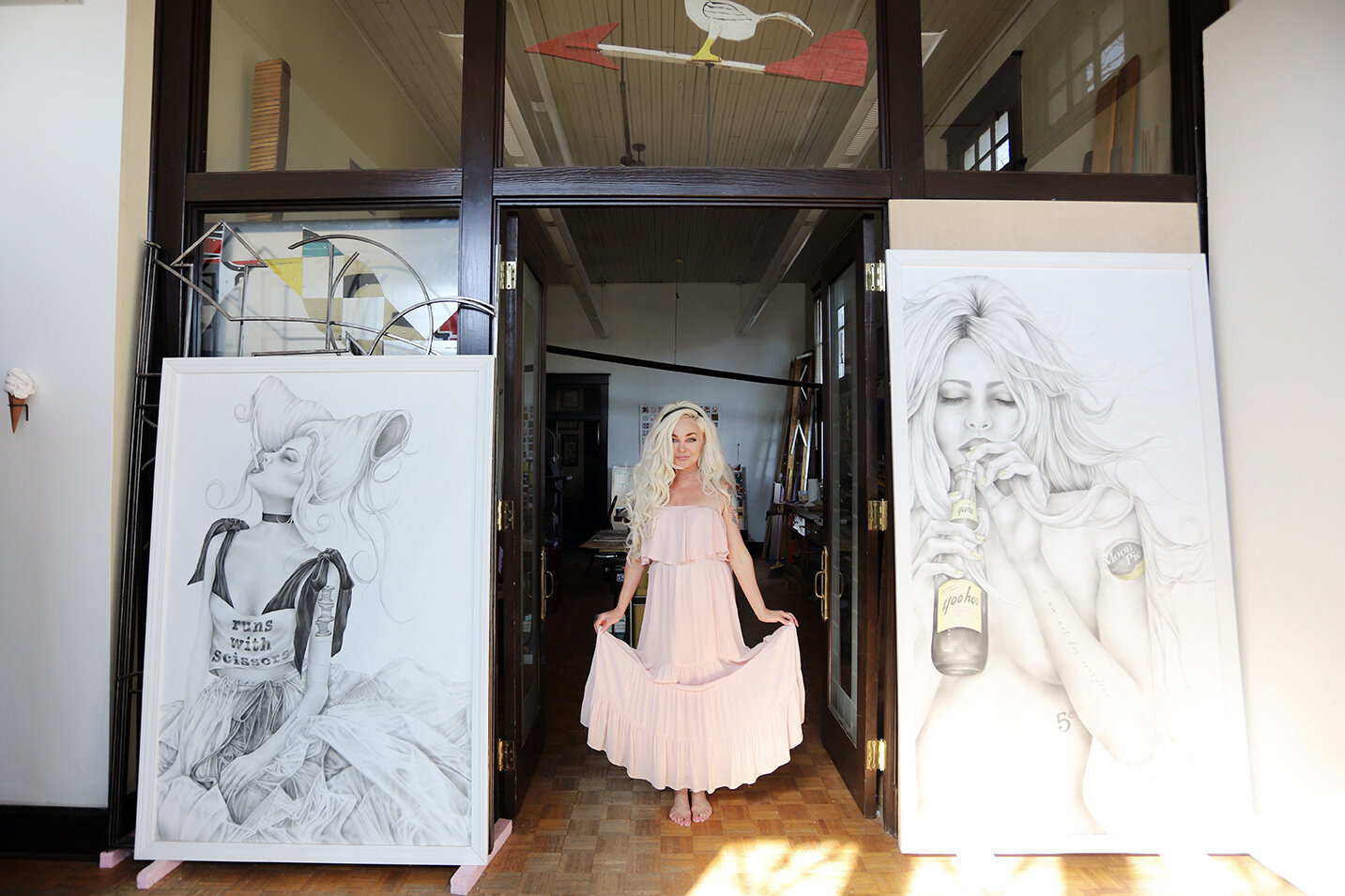 Greely, who’s originally from Amory, Mississippi, taught sculpture at Arkansas State University for four years in the ’80s before moving to Memphis. He’s been a professor of sculpture at the University of Memphis for 31 years. He’s on his last semester of research leave until May, and then he’s officially retiring.

His work is playful and incorporates found objects. 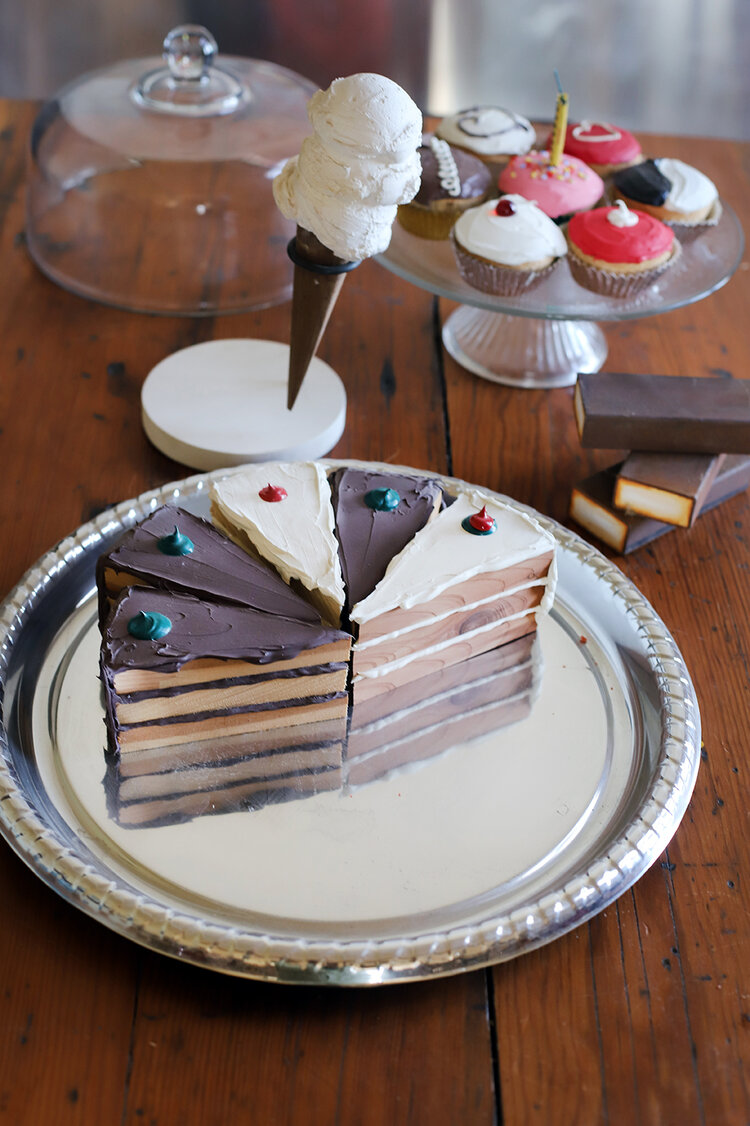 He has exhibited in numerous solo and group exhibitions across the United States, Europe, and Japan. Greely has some public art pieces in Memphis that you may have seen—Quiltsurround behind City Hall and Everybody’s Talkin’ in Audubon Park. You might have also noticed his neon sculpture, declare, inside the Tennessee Brewery.

Sonin and Greely knew each other back in the day, but the stars aligned for them when Sonin returned to Memphis to visit her mother after her sister’s death. A mutual friend, Dave Thompson, invited them both to Boscos for a few beers. 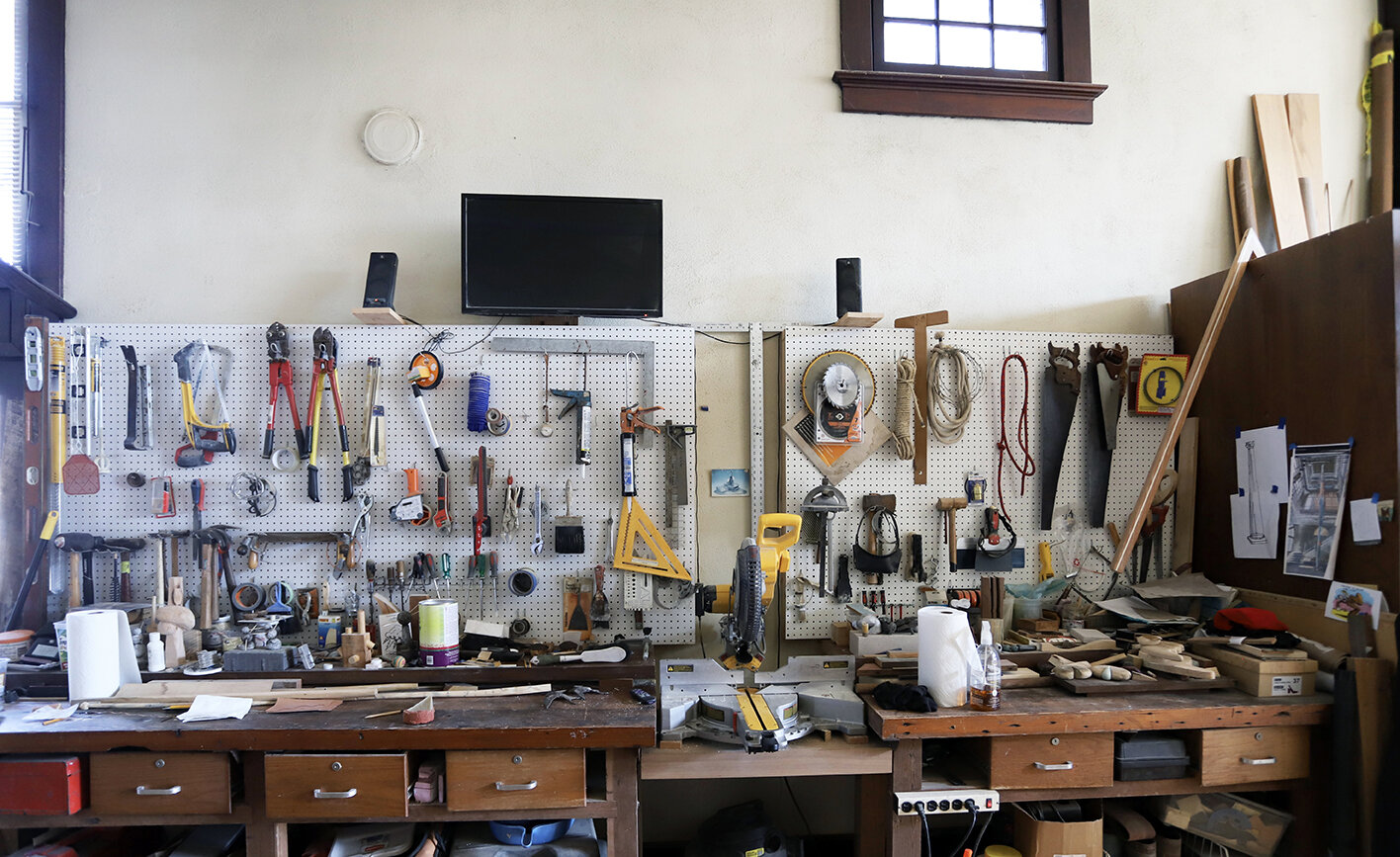 “Then Greely and I did five cross-country trips in a year,” Sonin recalls.

After leasing a building in the Edge District from fellow artist Pinkney Herbert for nine years, Greely was looking for a building to purchase as a studio and home.

He spent years driving through West Memphis looking for a place to call his own.

“I found a building on Broadway, but there wasn’t a clean deed, and the deal fell through,” Greely says. 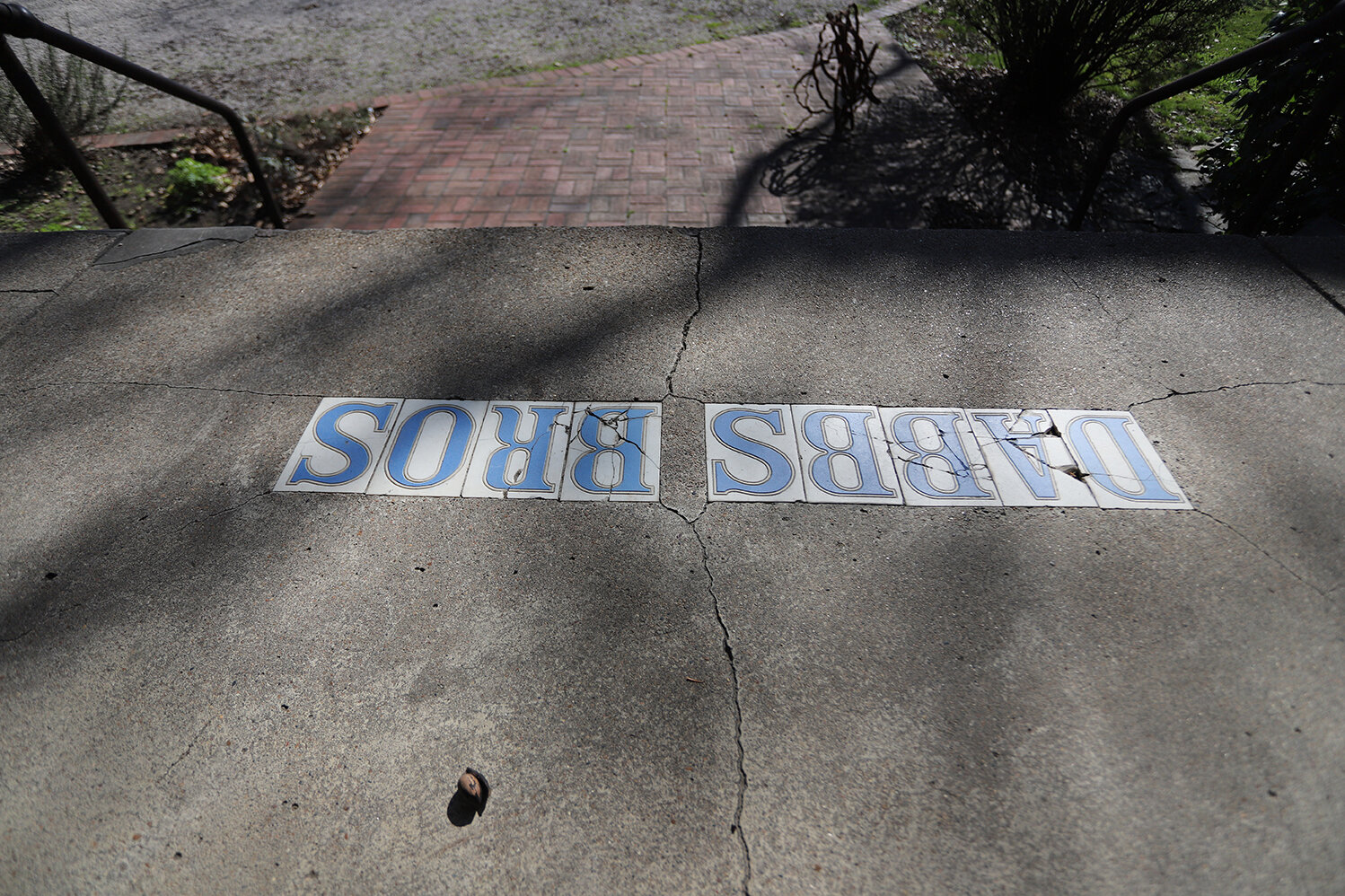 They “stumbled” on the Dabbs Store at the last minute. From 1913 to 1975, the building was a general store, which serviced the railroad.

The building’s most recent tenants included an architectural firm and the residents of two upstairs apartments. But when Greely and Sonin saw its “for sale” sign, the whole building had been empty for a year. Within five weeks it was theirs.

“We spent the night before Christmas here in 2017, and moved in officially in January 2018 because that was the day we brought over Oreo, our cat, and once you bring the cat you’re officially moved!” says Sonin. 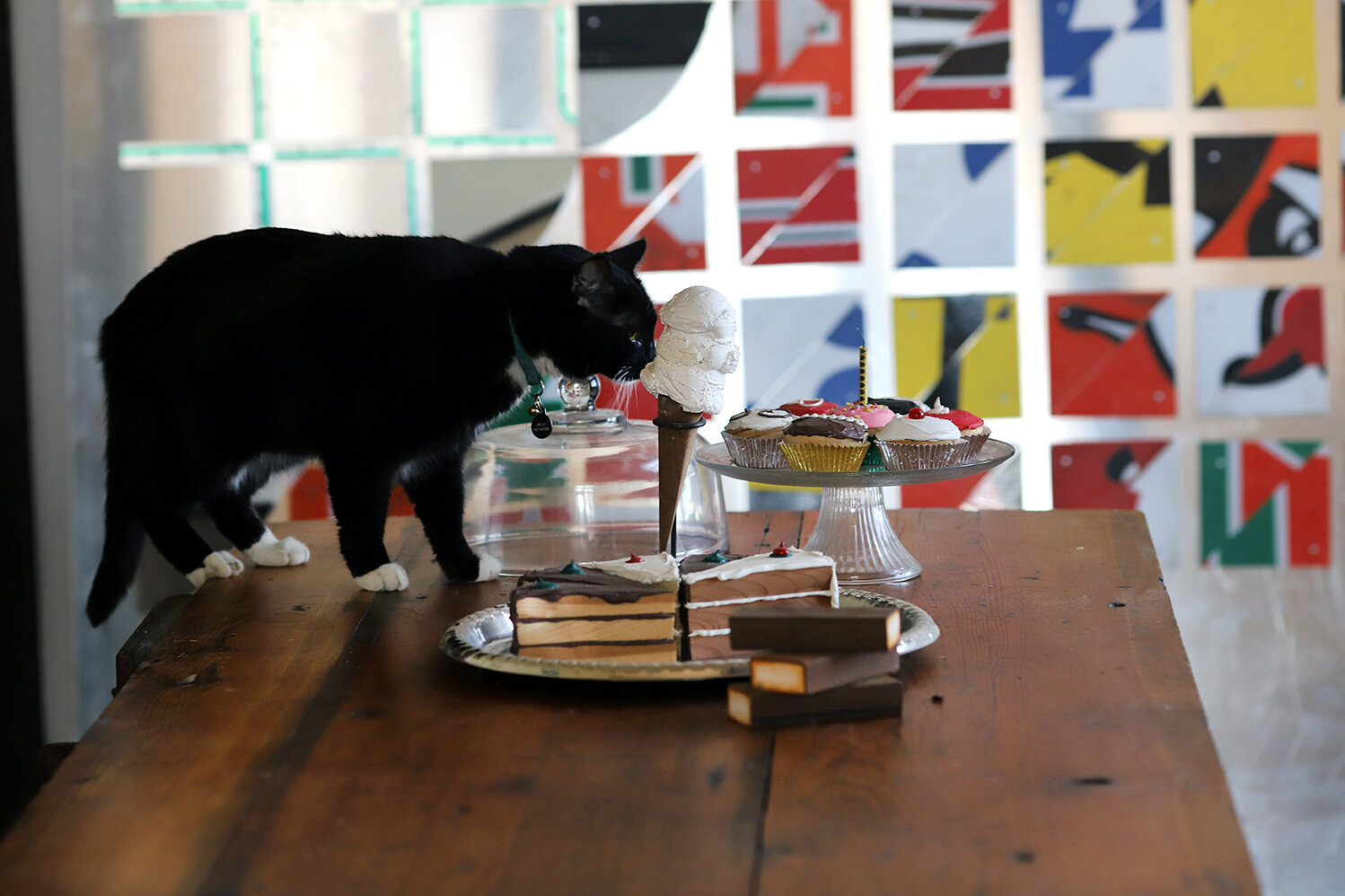 Now they each have a studio downstairs, and the upstairs apartments are being renovated into one big living area. There are three refrigerators (!!): The main one is in one of the original kitchens, where they do most of the cooking; there’s a snack fridge downstairs close to their studios, and an old empty one in what will one day be a remodeled kitchen.

We visited the couple (and their two pit bulls, Avalon and Venice, who are West Memphis Animal Shelter alums) on a Saturday afternoon to learn more about their life in West Memphis. 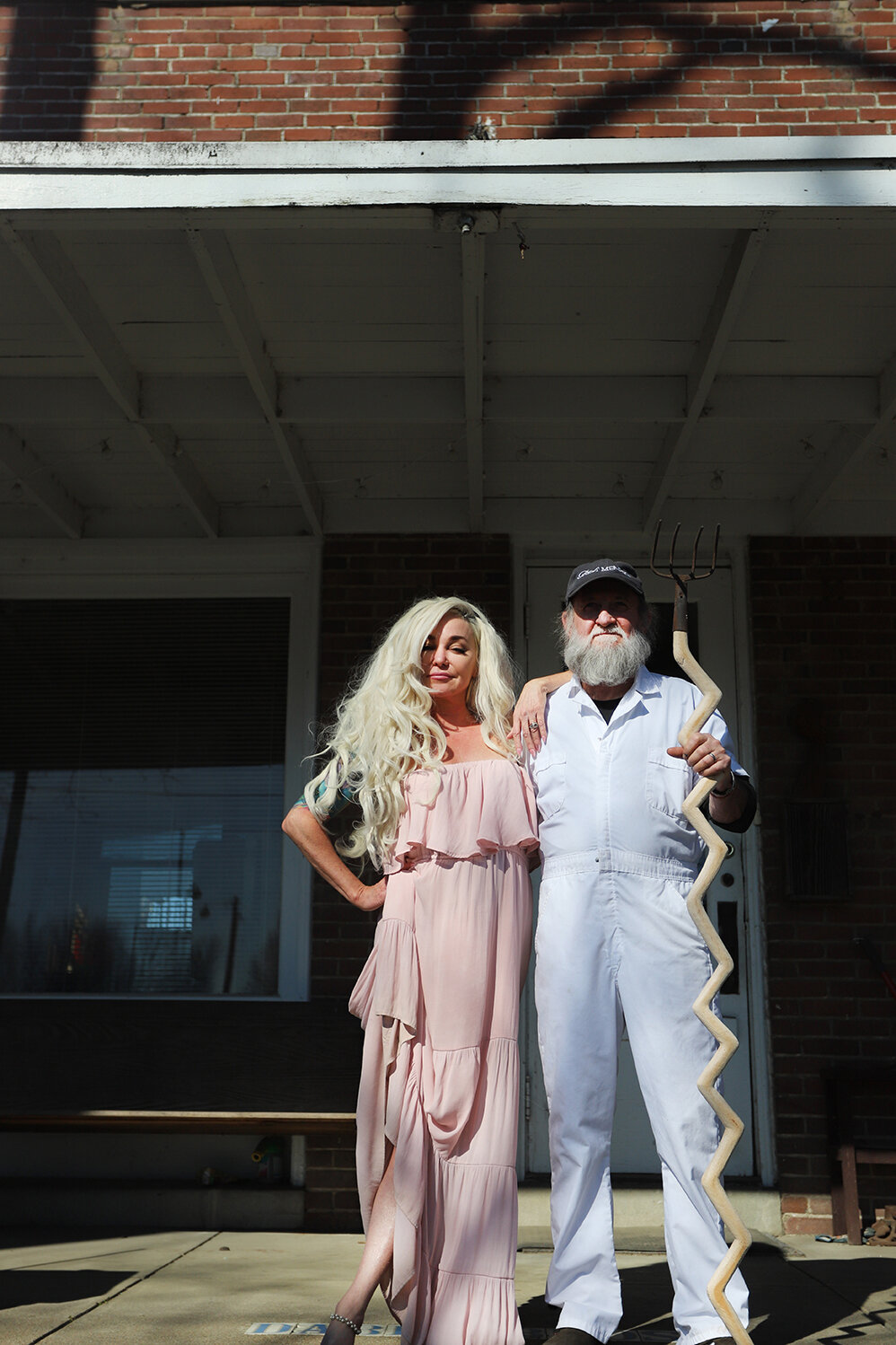 Edible Memphis: Who does the cooking?

I do everything except make Rotel and grill.

Greely: She’s a very good cook, and she cooks, but it’s always at midnight. She’s got every TV on, and the music is on, and she’s using the roller to paint the kitchen. [Laughs.] 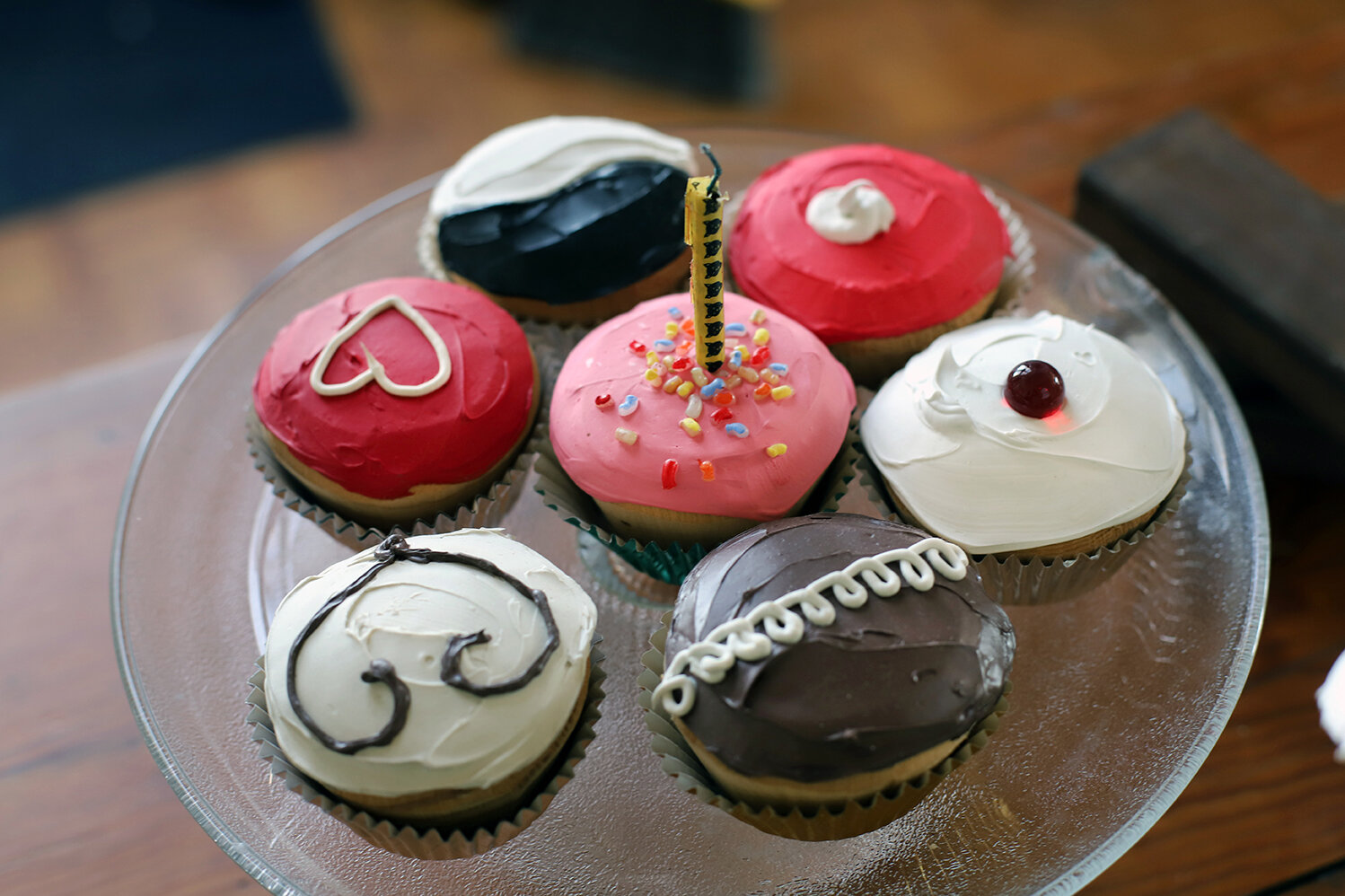 It looks like Greely likes to make “sweets.” Tell us about these wooden cupcakes.

Greely: The wooden cupcakes with caulk icing were meant to be an art fair impulse item. In New York I sold 21 in 20 minutes for $100 each. So then I made plaster ice cream cones. And then I made a wood and caulk cake for David Lusk Gallery. I made a 54-layer cake on my 54th birthday. I started making them as gifts for Christmas and birthdays. There’s also s’mores, ice cream sandwiches, and cheesecake made from various materials. 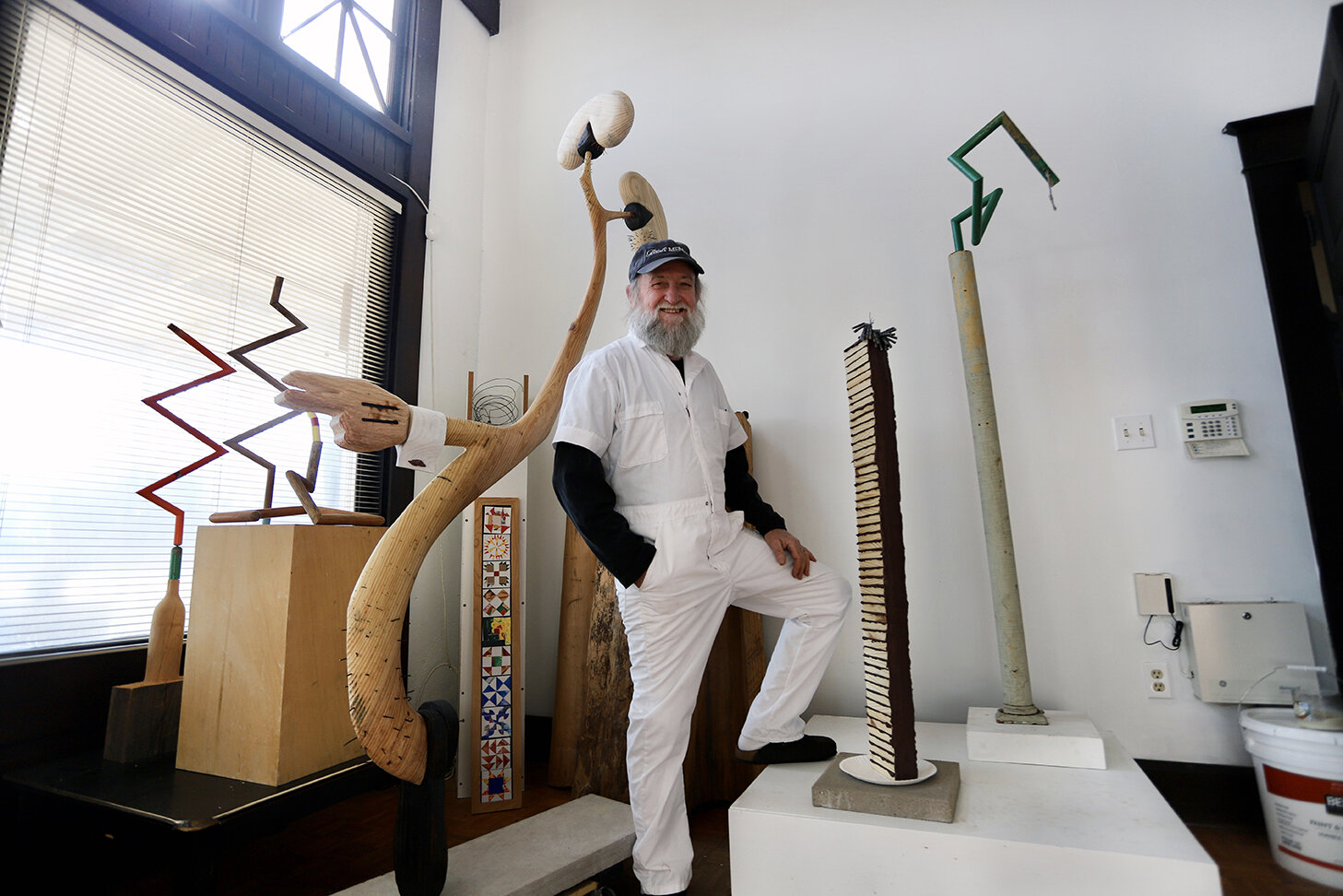 OK, back to real food. What’s a typical meal?

We like to snack on cheese, especially 1,000 Day Gouda from Trader Joe’s. I’m surprised my heart is as healthy as the doctor says it is. I always ask, “Are you sure my cholesterol is low?” I go up and down stairs all day long, though!

We do eat some vegetables. Greely likes potatoes and carrots, and he loves grilled asparagus and green beans.

I love Italian spinach, dolmas made from meat and collard greens—there are no grape leaves in West Memphis! 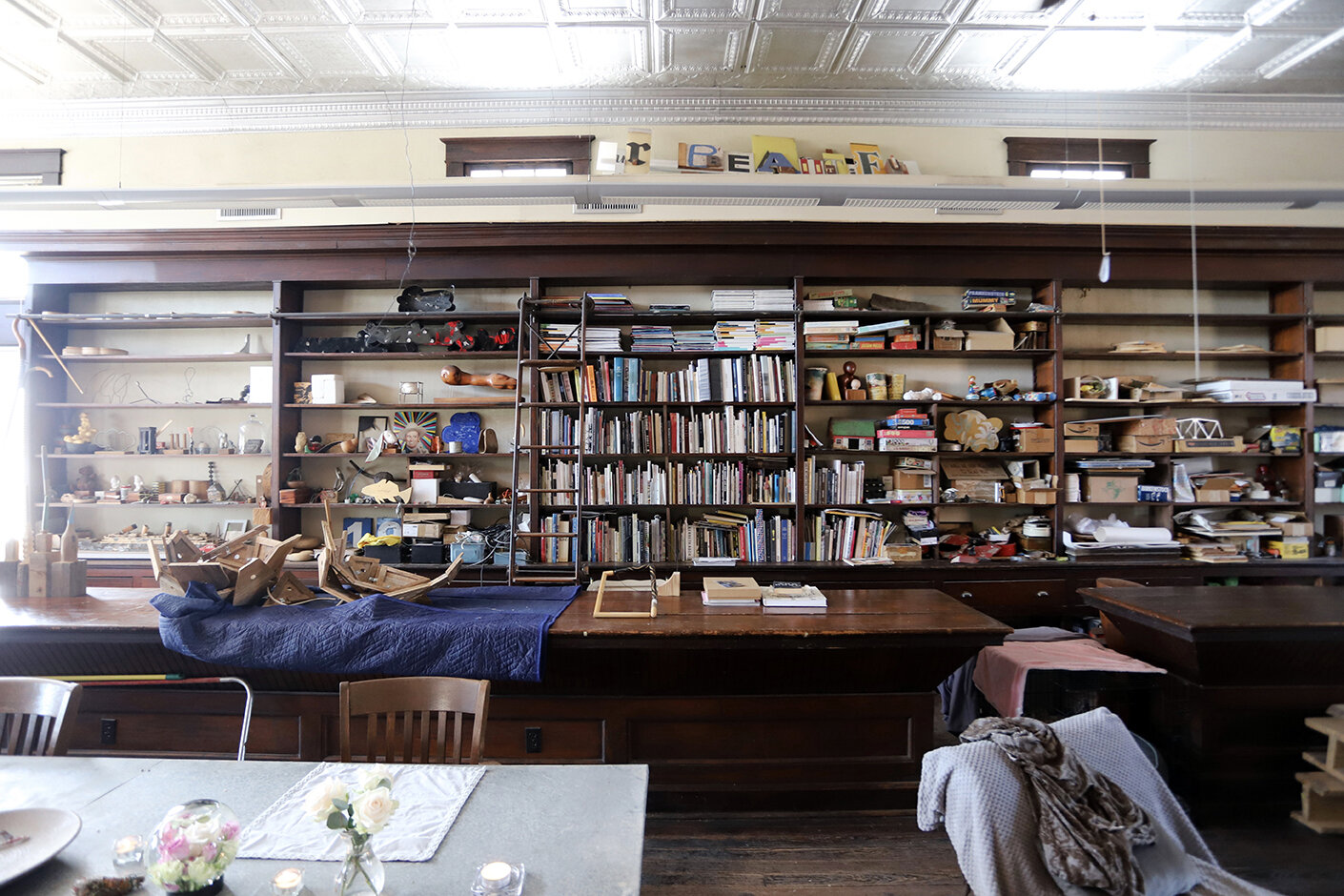 Greely: There’s a great view of the Arkansas Delta plain across the land to the west from the 40 bridge. If there wasn’t a flood plain, people would already be here. That’s what Brooklyn is.

Sonin: I think people think it’s further away than it is. 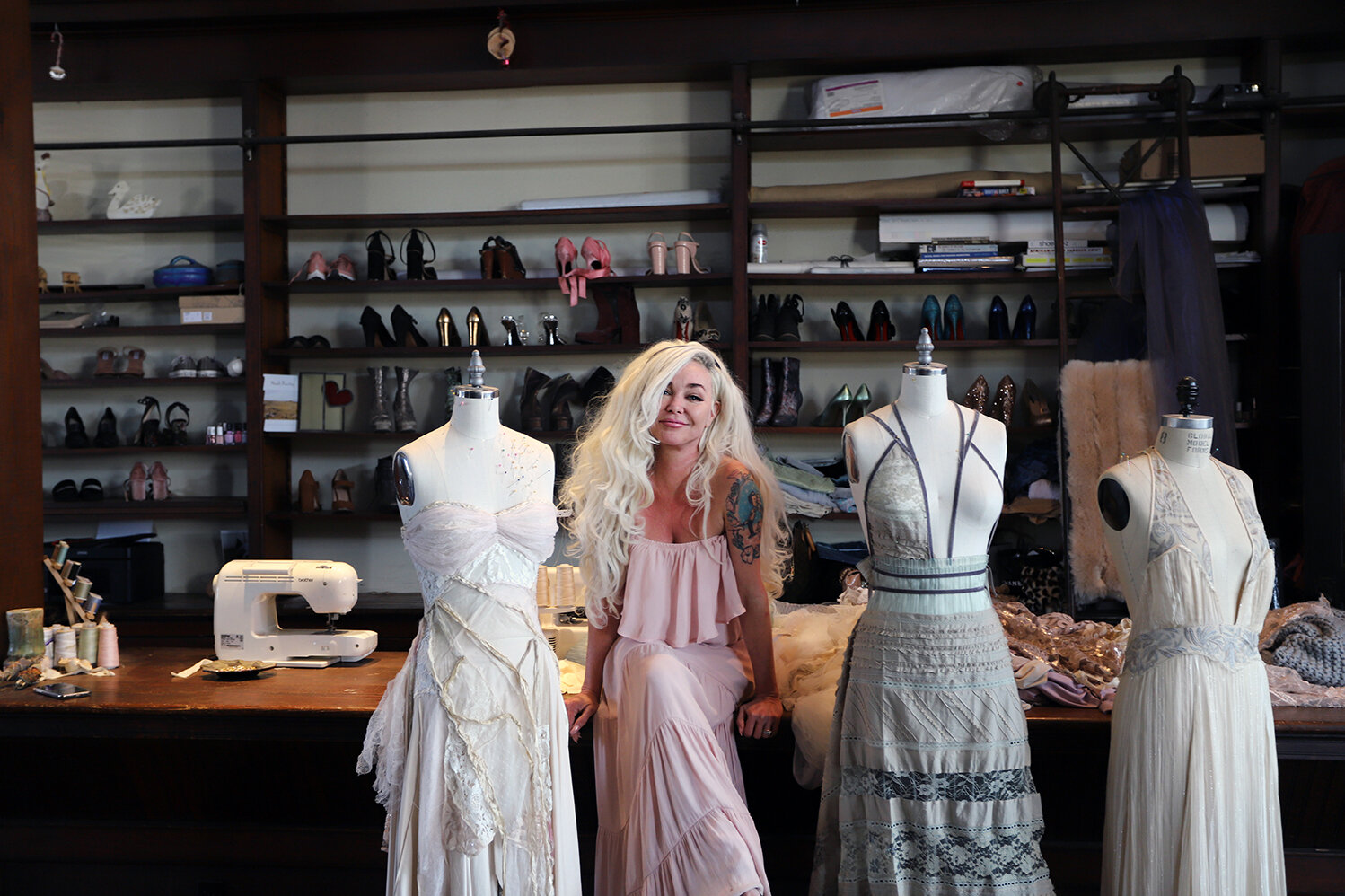 So you once referred to West Memphis as the Brooklyn of Memphis. What did you mean?

Sonin: “Best Memphis” is a better descriptor. There are a lot of empty buildings on Broadway. The gas station at the end of Avalon would be a great studio. It’s going to happen eventually. The mayor [Marco McClendon] is really trying hard. He got Randy Walker from Minneapolis to do the [art installation on the] water tower on Broadway.

Greely: A year after we moved over here, I did a show called Best Memphis at DeltaARTS. The neon “Best Memphis” sign is still on view in the lobby. That’s also when I made these [Best Memphis] hats [motioning to his head]. 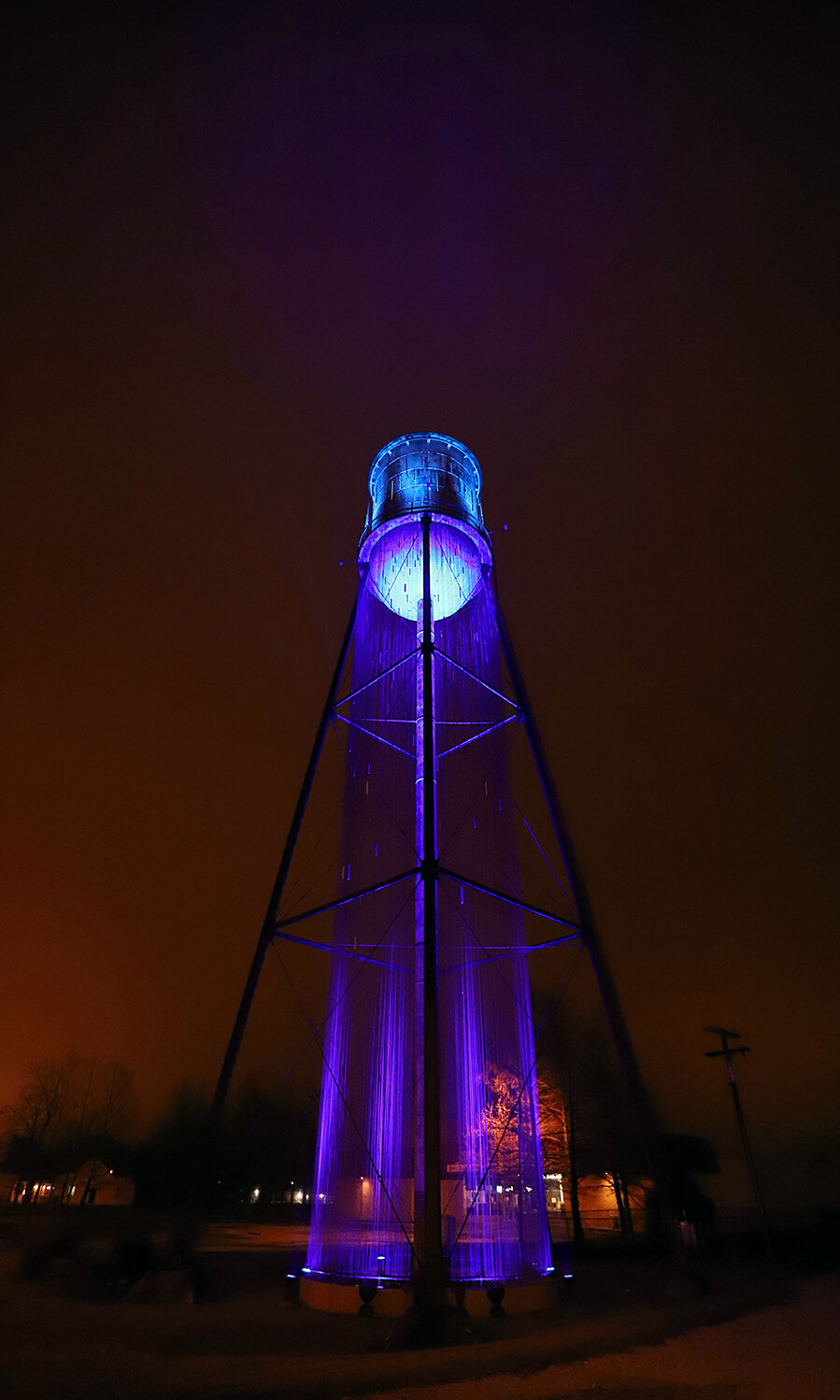 What things do you do for fun here?

Sonin: Southland Casino. I love to gamble. I had Vegas four hours away when I was in Venice. Greely times me because I don’t know when to quit! When Greely’s not timing me, his favorite thing is working in his studios in Best Memphis!

Greely: Crossroads Cafe—there was a magnet on the fridge when we bought the building. Ray’s B-B-Q is really good. Williams Bar-B-Q is good. [Looks to Sonin.] Have they closed? It’s just off Broadway on 14th. They won an award recently. Well, they’re all “world famous”—maybe they gave it to themselves. 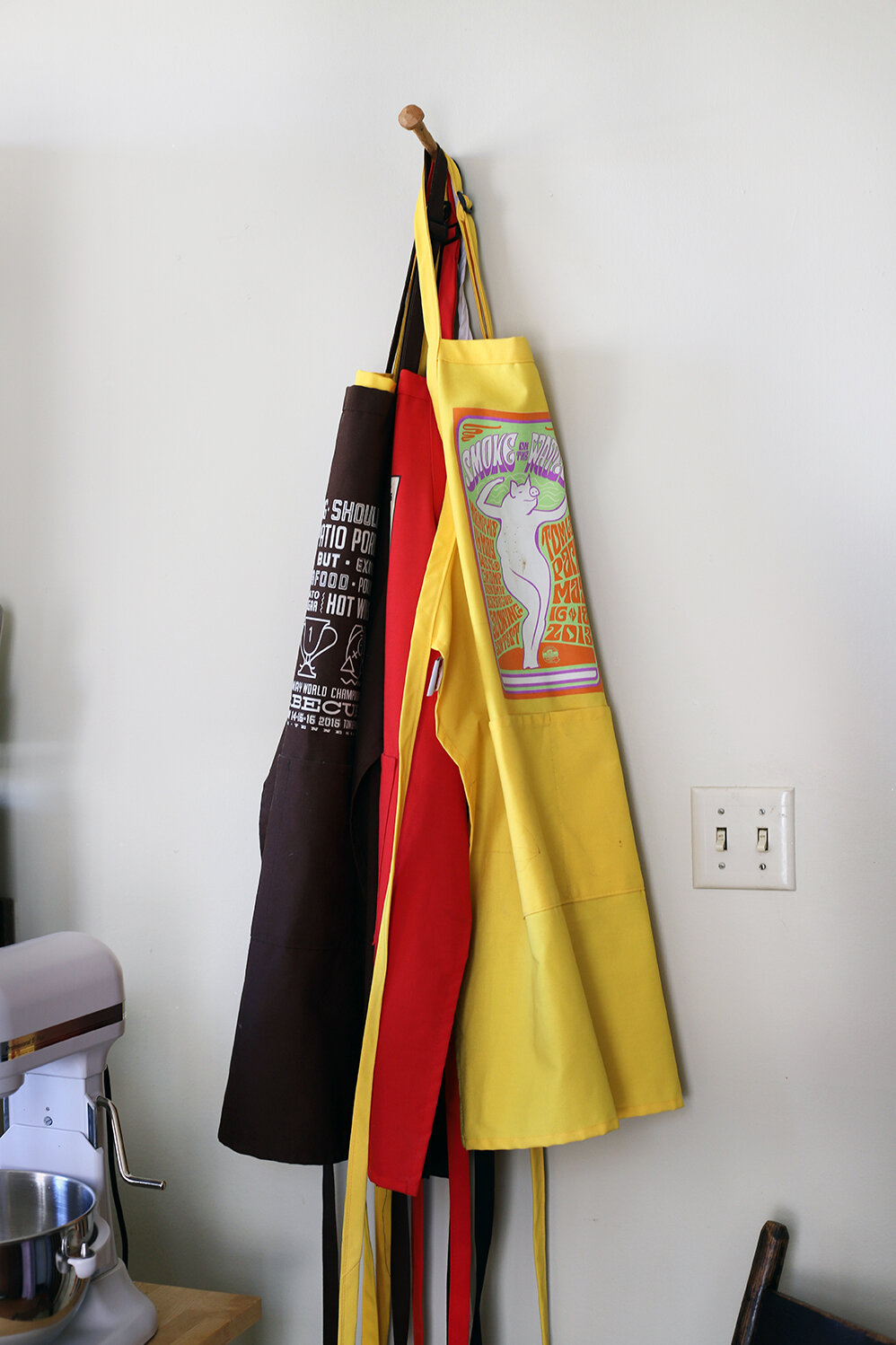 Greely: I was a judge for the displays at Barbecue Fest [Memphis in May’s World Championship Barbecue Cooking Contest] for 10 years. It was great. Only about 10 teams would enter. We’d go down on Thursday morning, and they’d give us an apron, a pen, and a pitcher of Bloody Marys and drive us around on a golf cart.

Sonin: I can’t go in the Big Star—I get harassed. People touch my hair, follow me down the aisles.

I have no problems. I fit right in.

Sonin: I trek out to Trader Joe’s in Germantown. It’s closer than Nashville or New Orleans. Plus, it is by my mom’s house. I go to Kroger on Union for cheese. 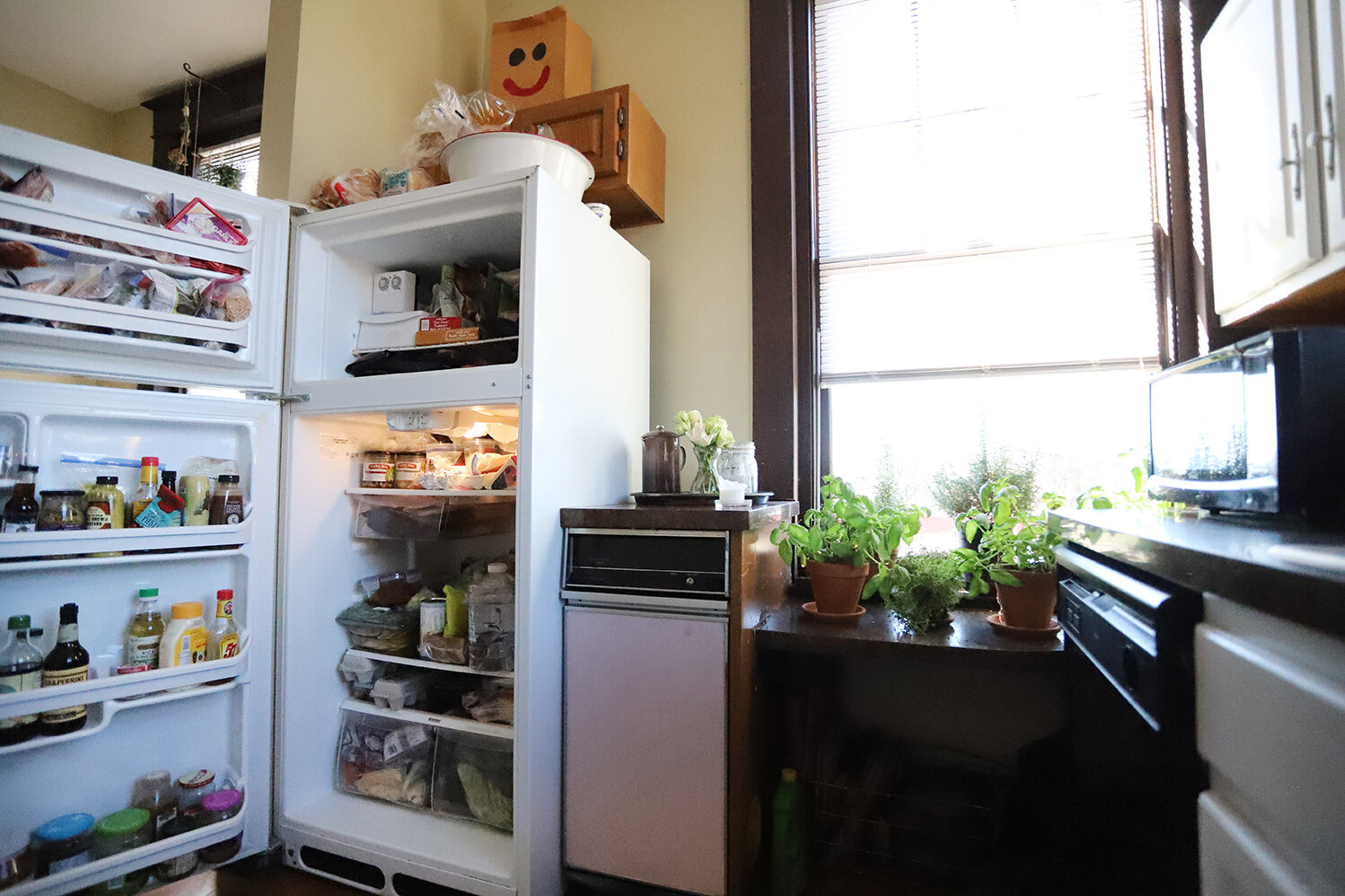 What do you stock up on at Trader Joe’s?

Sonin: Meringue candies. All the candy, actually. Ground beef and other organic meat because it’s affordable. Rainbow carrots. Dog treats. Actually, I get flowers, dog treats, and then food! I like the box of wine for $11.99. And the carnitas.

Is there a farmers market?

Greely: ASU has one in the parking lot, but it is more like a flea market.

Sonin: Brandon [Pugh of nearby Delta Sol Farm] used to drop a bucket of flowers on the porch. In the spring, the front area is my garden. (In Venice I had a garden year-round where I grew my own food.) Last year, tomatoes, okra, radishes, peppers, carrots, and herbs (lemongrass, thyme, parsley, rosemary, sage, catnip, Thai basil). It was great.

I’m turning the kitchen into a green room—the sun is perfect. 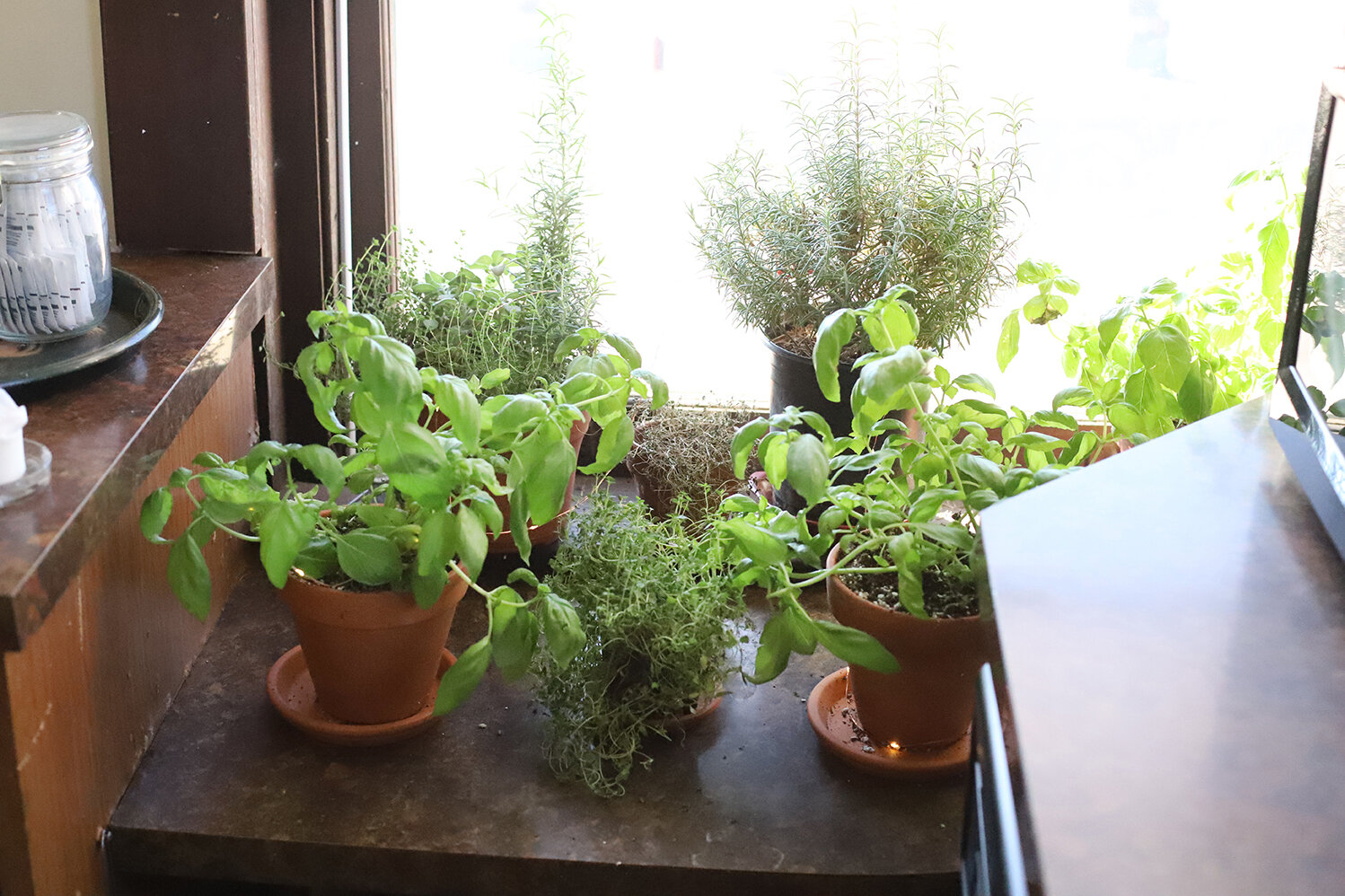 What is the first thing you remember cooking?

Sonin: When I was around five, I grew radishes in the garden for the first time, and, when I picked my first one, I was going to save it and put it in my room. My mom made me put it in a salad.

Greely: In college I cooked pork chops in a slow cooker with a can of chicken and rice soup.

What was your first food-related job?

What is your “default” thing to cook when you’re hungry and need to make something fast?

Name any ingredients that you couldn’t live without.

Sonin: We have a smart-refrigerator fantasy! 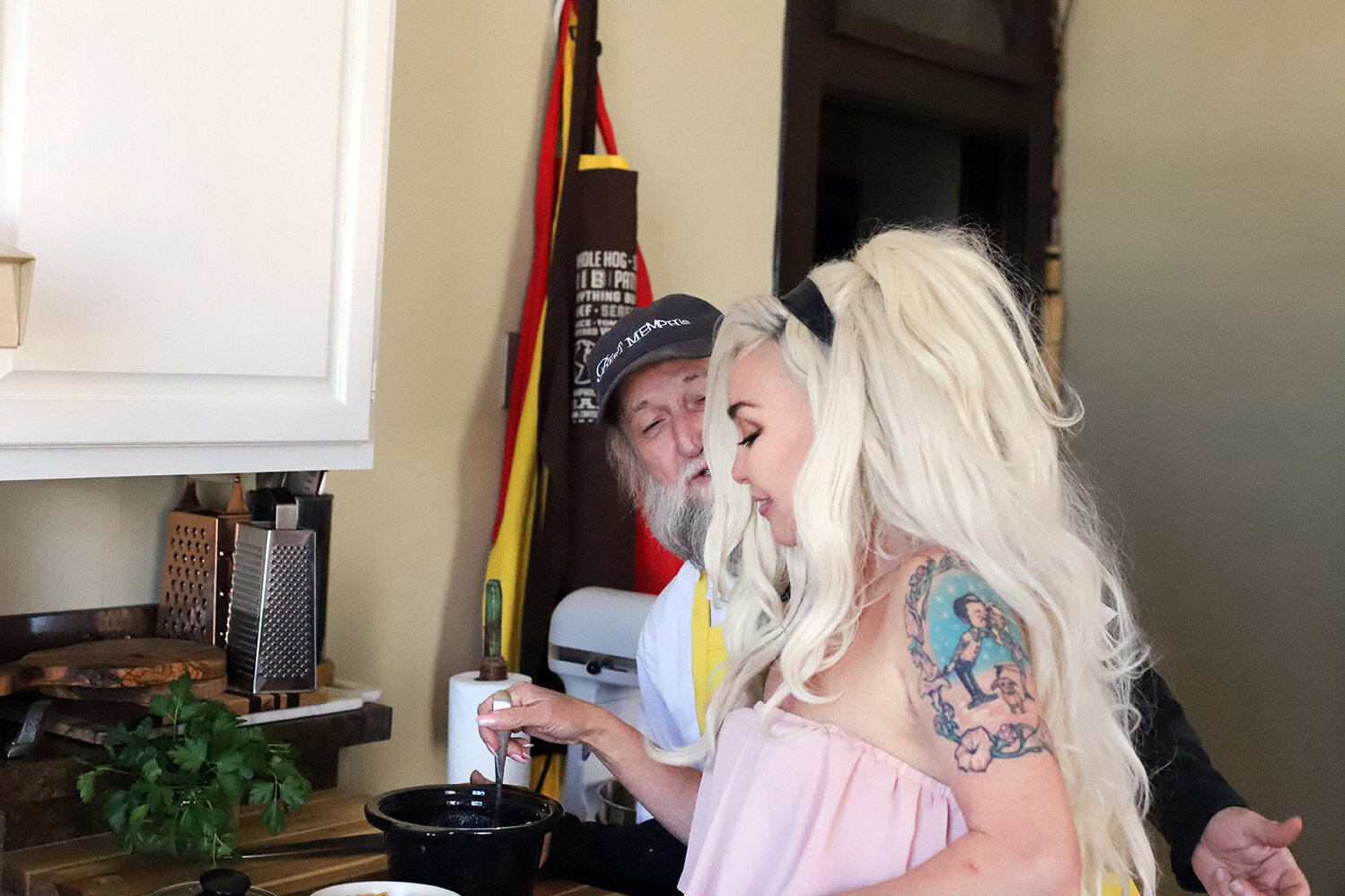 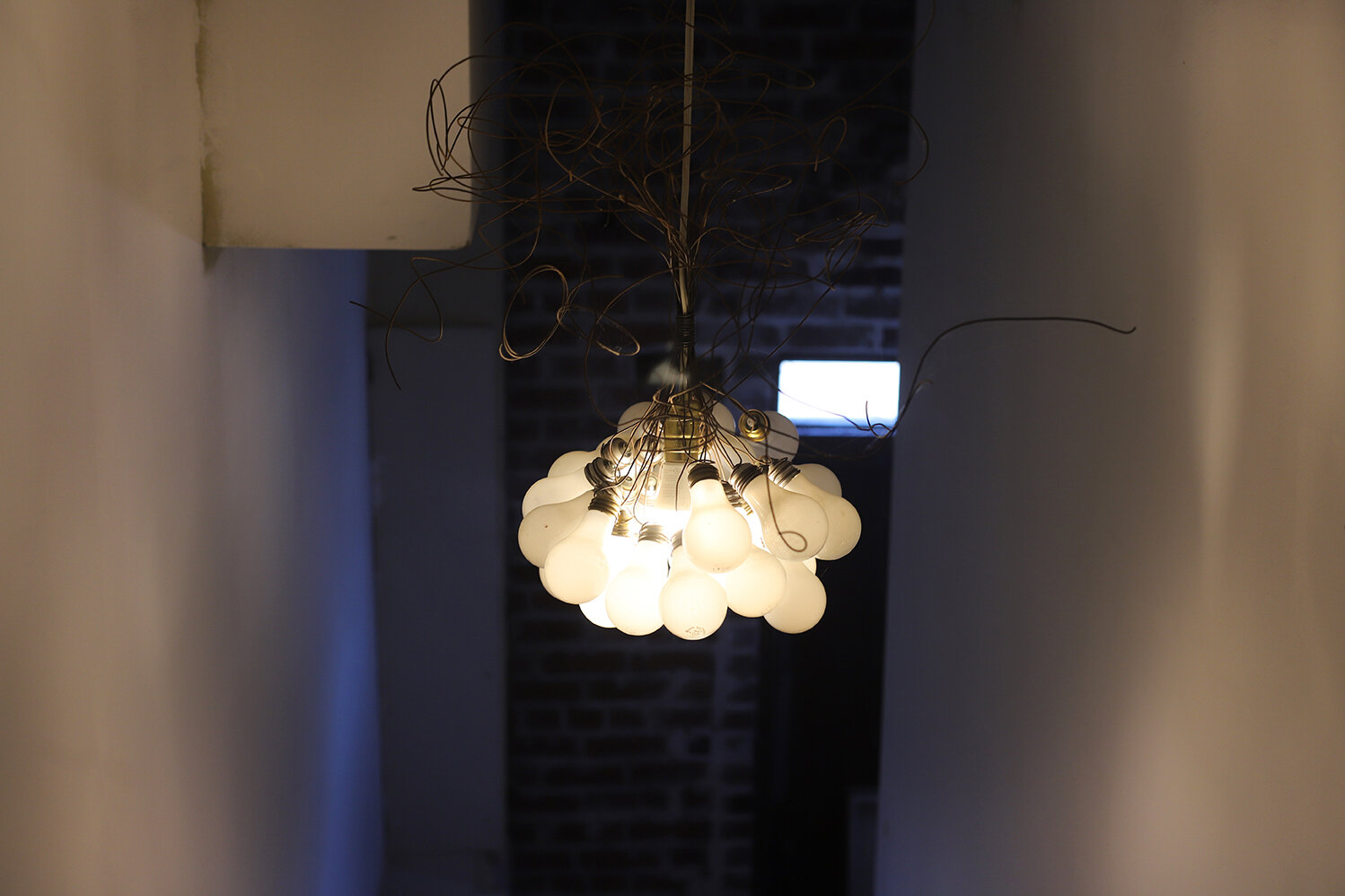 Sonin: My mezzaluna! Makes me feel all kitchen witchy!

Do you watch cooking shows on TV? If so, which ones?

Sonin: Beat Bobby Flay, but my fave is anything Nigella! She’s saucy and campy fun!

Greely: The ones Sonin watches. 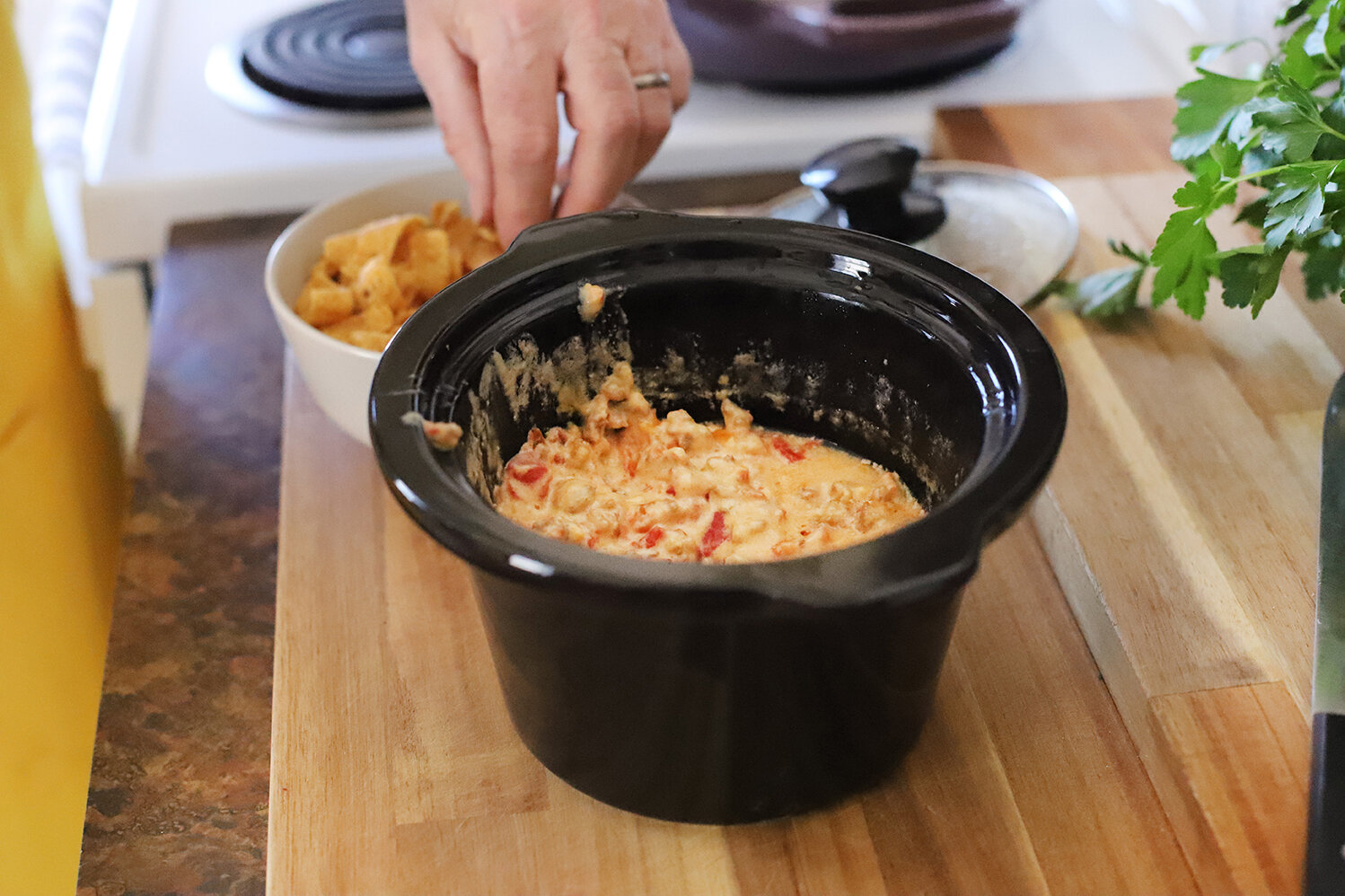 Most embarrassing thing in the fridge?

Greely: Velveeta. I’m not embarrassed, but people make fun of it.

Sonin: I hid it behind the LaCroix in the fridge so you wouldn’t see it! I used to buy Pancho’s, freeze it, and take it to my son in LA. Out there it’s more about pickled carrots and onions. They have melted cheese, but nothing like Pancho’s dip. Chain restaurants have a version of it, but why would you do that in LA?

Here in Best Memphis, cheese dip is not an issue. 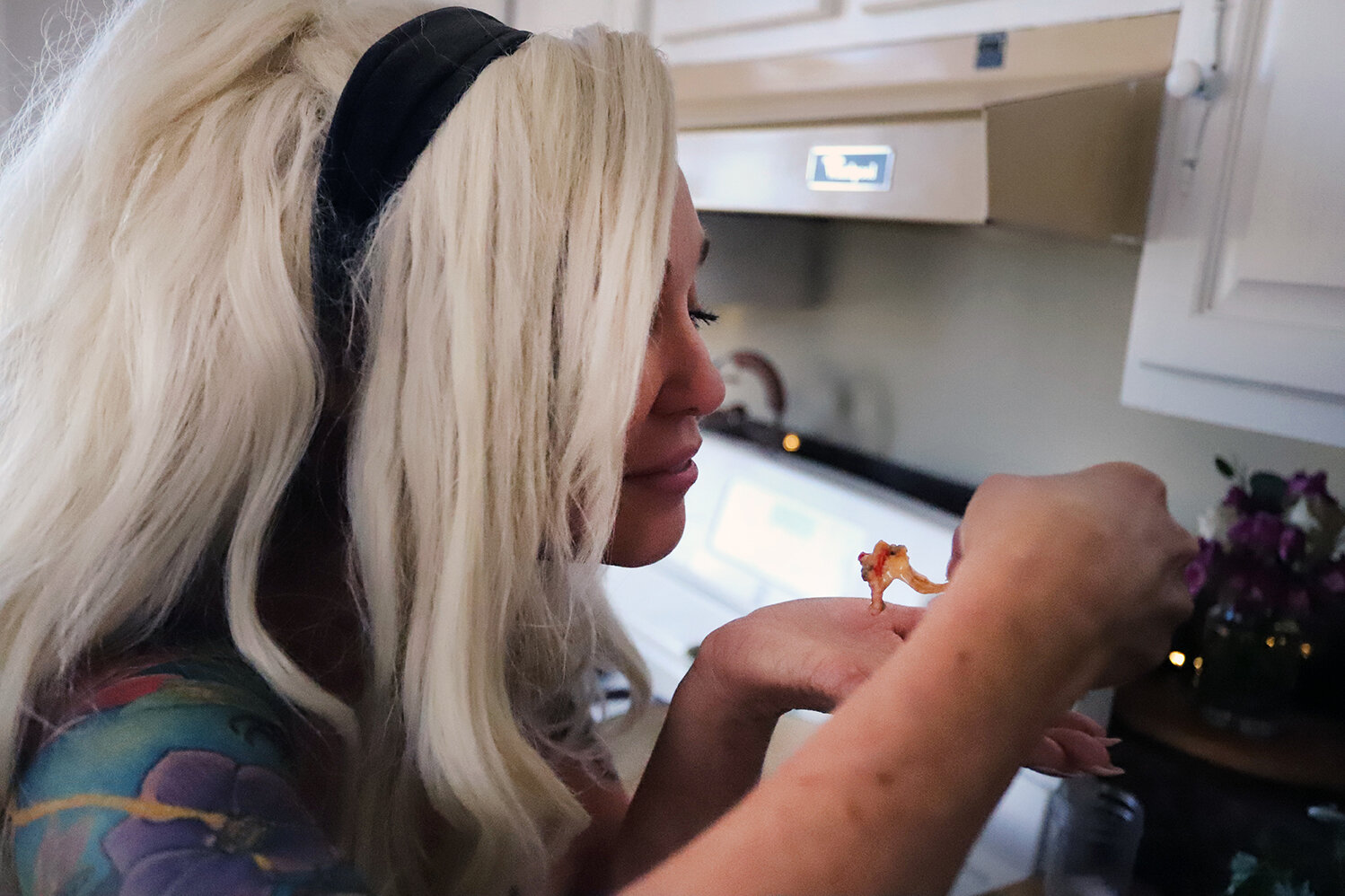