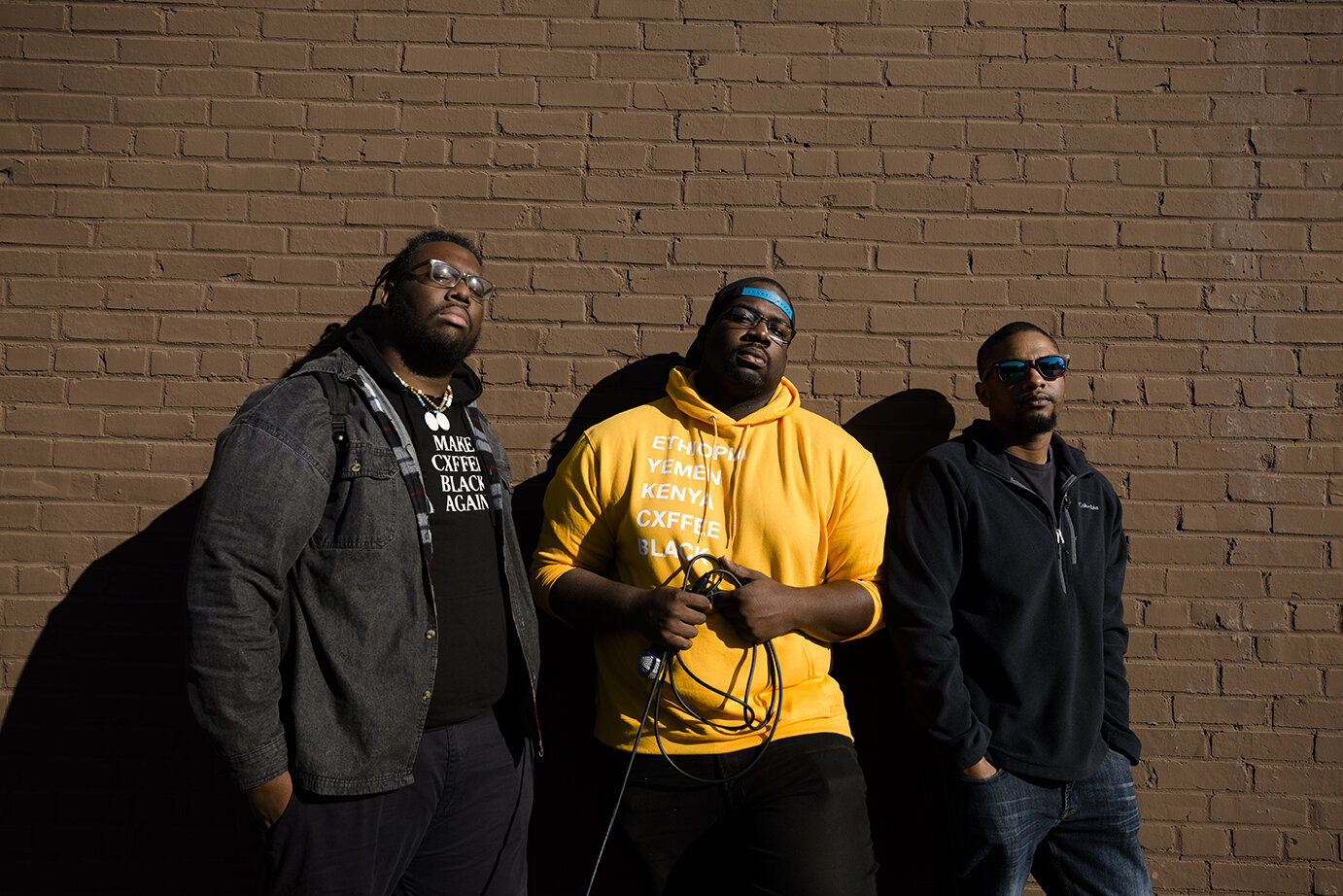 “Yo, what if we released an Ethiopian coffee—and called it Guji Mane?”

In July, Matt Mages—a storied local DJ that I’ve been collaborating with for most of 2019 through Cxffeeblack, the lifestyle brand I founded—asked me this question after a studio session. Ethiopian coffee isn’t the expected drink of choice for a hip hop studio that has recorded the likes of Memphis rap legends 8ball and MJG, but for us it was the norm. We spent most of the last two years recording live hip hop improvisation sessions over freshly brewed pour-overs. We called it On the Spot.  Hip hop is all about the vibe, and although we all loved coffee, there was always some dissonance, getting coffee from third wave coffee shops and leaving to go record a bunch of freestyled bars over trap drums and blues guitar. 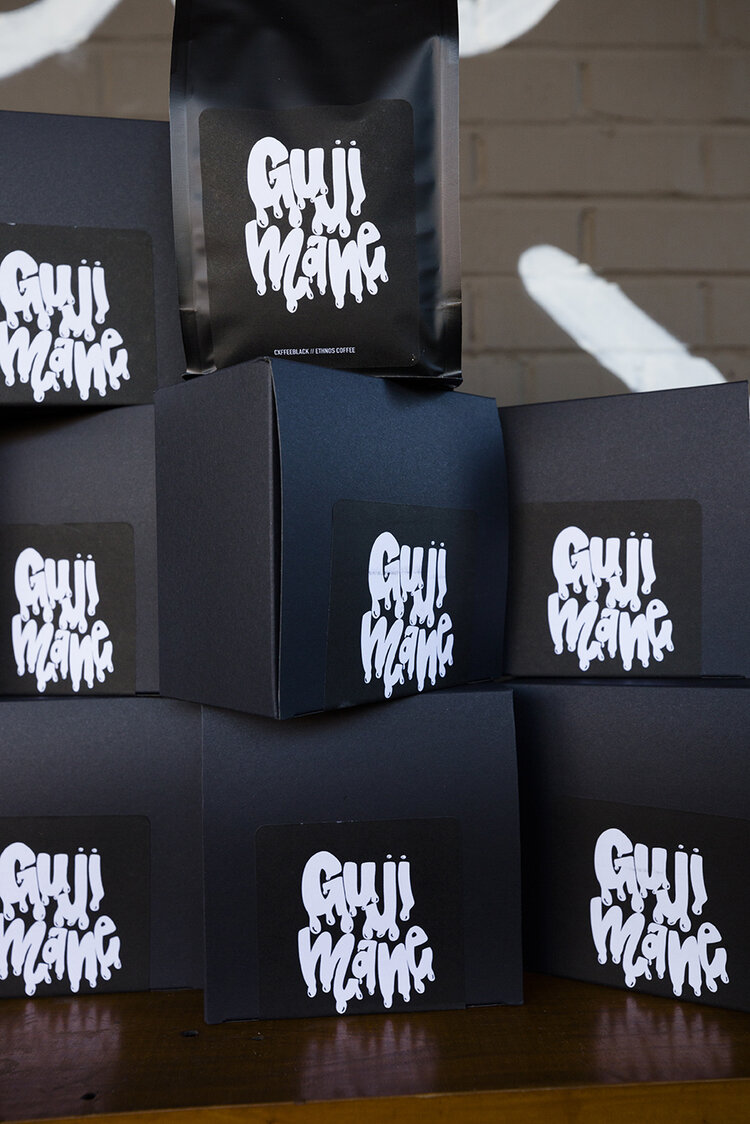 When Matt suggested that we make our own brand of coffee, the idea felt impossibly perfect. It was so Memphis, and so indicative of all the things we wanted to see in the coffee industry, that we couldn’t help but dream about it for the next week.

We were coffee nerds that were undeniably marked by Memphis rap music. 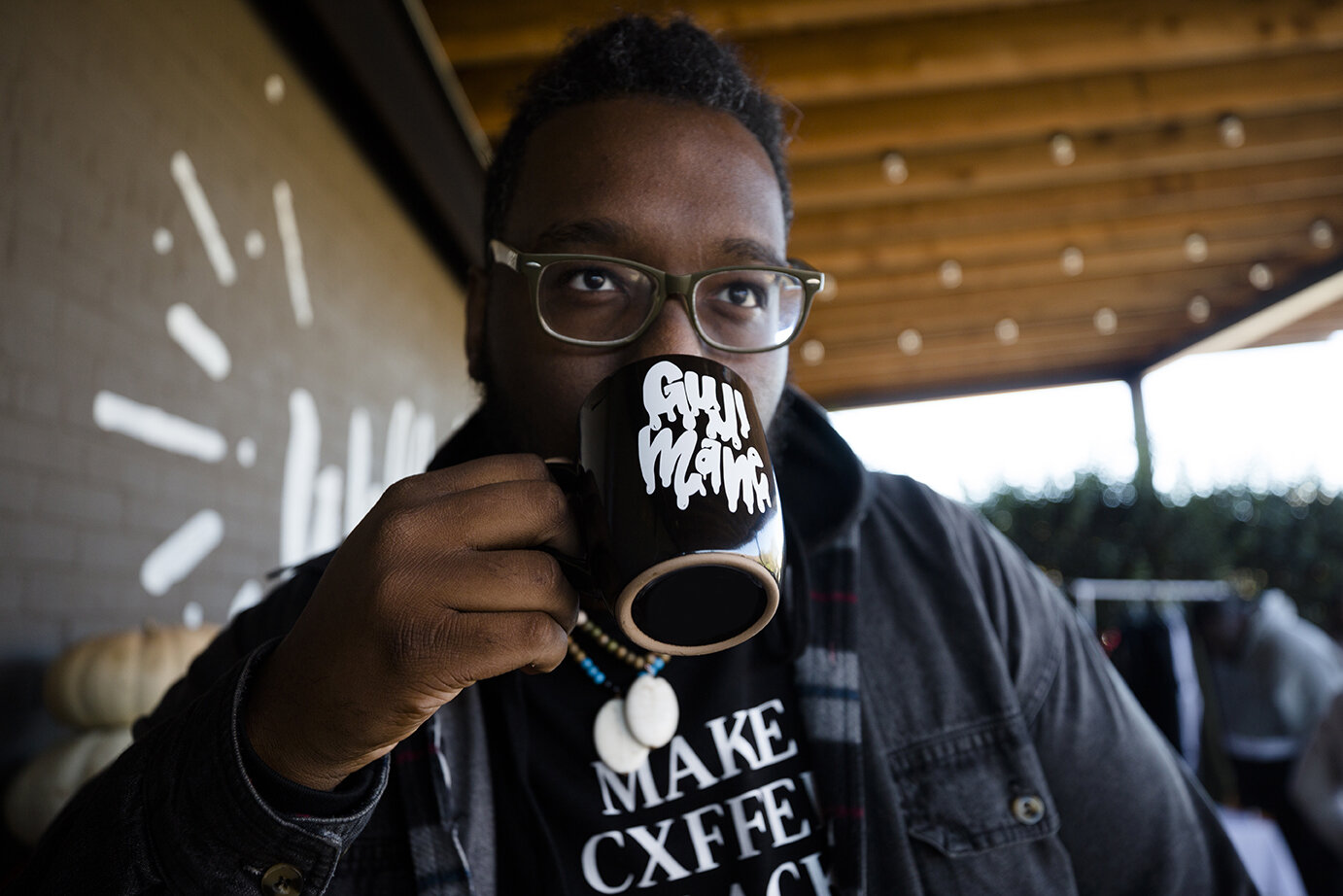 It felt like a remix. It felt hip hop. It felt black.

The problem, however, was that, though I was a passionate barista, I had little to no skill as a roaster. Because I wasn’t willing to compromise my love of perfectly brewed, flavorful coffee for my love of hip hop, I needed a roaster who created in that intersectional space. The next day, a Chicago indie rapper I followed on Instagram named @stvg7 posted a pic of a package of Ethiopian coffee he received in the mail. I was incredulous. I’d never met another rapper who was interested in coffee culture, much less a coffee roaster who sent sponsored coffee to rappers. I immediately DMed him and asked who the roaster was. To my surprise, the roaster had just moved to Memphis—Kenny Baker of Ethnos Coffee. 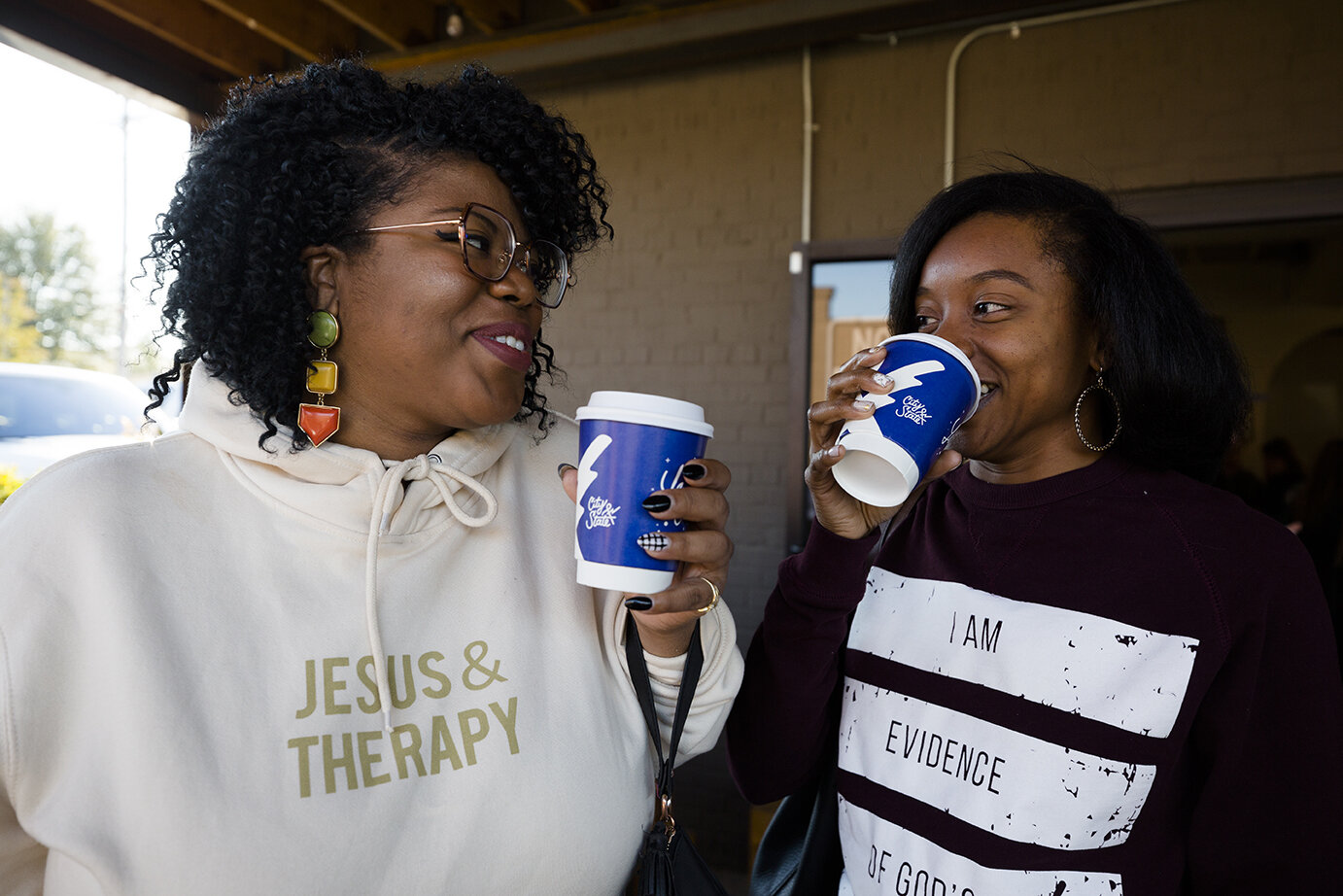 The next few months moved pretty fast. My wife, Renata Henderson, known online as @browngirllettering, had an amazing idea for a watermark to to communicate the message we wanted to tell. Between her design chops, Ethnos’s roasting ability and the barista prowess of one of my homies in the coffee industry, Brian Williams II (one of French Truck’s top-tier baristas and a grad student at the University of Memphis studying the intersection of critical race theory and coffee culture), we dropped something that told the coffee story we always wished we had heard. A story where coffee is a natural extension of the black diaspora narrative.

The creation of the Guji Mane mirrors the story of the music that inspired it. The name sampled indigenous African roots and chopped it over an undeniable trill aesthetic. It, like hip hop, was also the result of a multi-ethnic group of folks who didn’t know enough of the rules to realize they were breaking them. It was created without an abundance of resources. There were no label, no industry cosign and definitely no budget.

It was made from black farmers in Ethiopia and marginalized Memphis creatives. 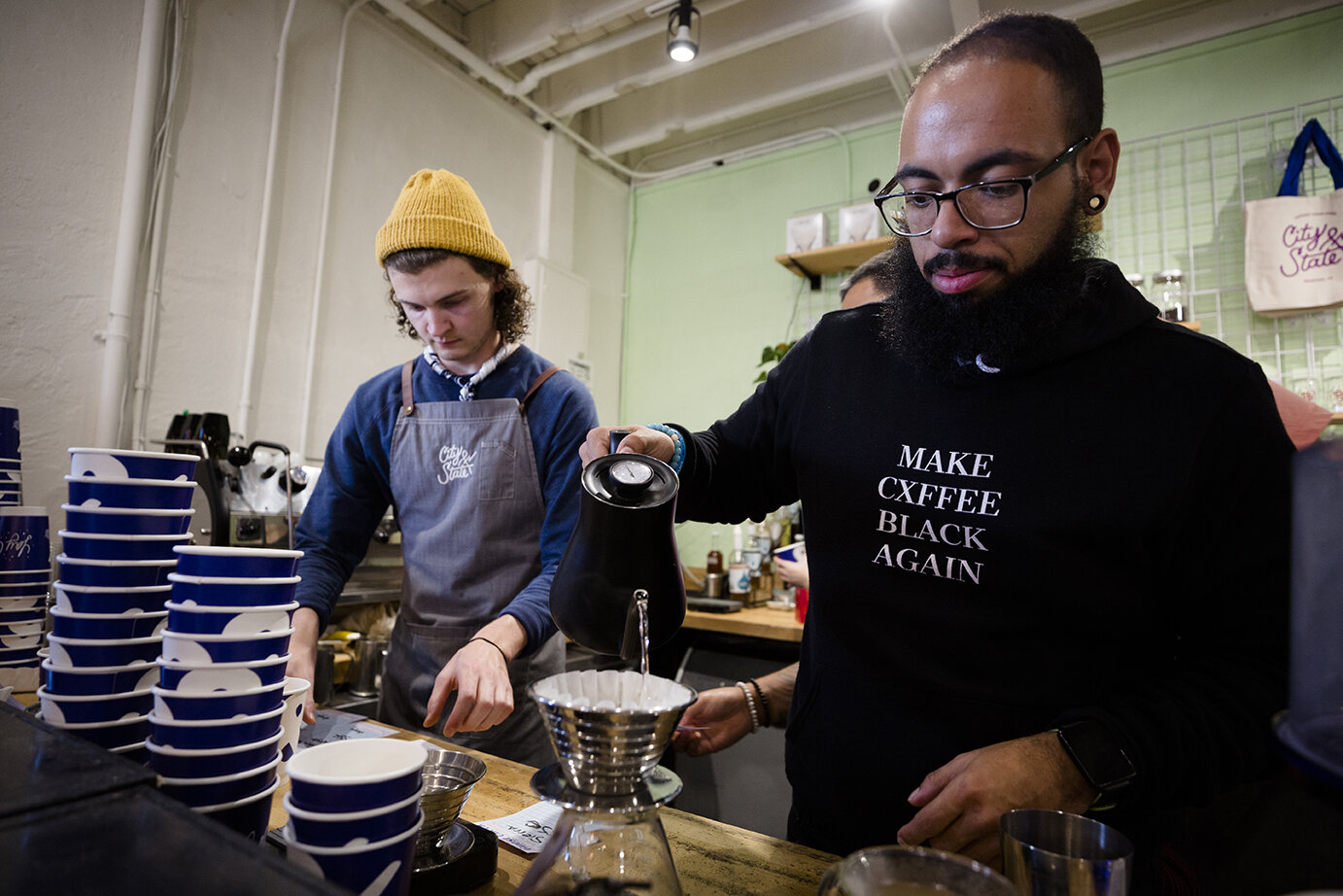 We sold over 50 pounds in the first 10 days to a ragtag group of coffee lovers and hip hop aficionados. It spread from word of mouth, and we sold the fruit of our labor out of the trunks of our cars and at the ends of our concerts.

I’m sure for some folks in the coffee industry our story isn’t much. But for a group of people who never felt represented in the coffee culture they patronized, it was revolutionary.

It showed that hip hop culture, and more importantly unapologetically black folk, had a coffee story we could call our own. 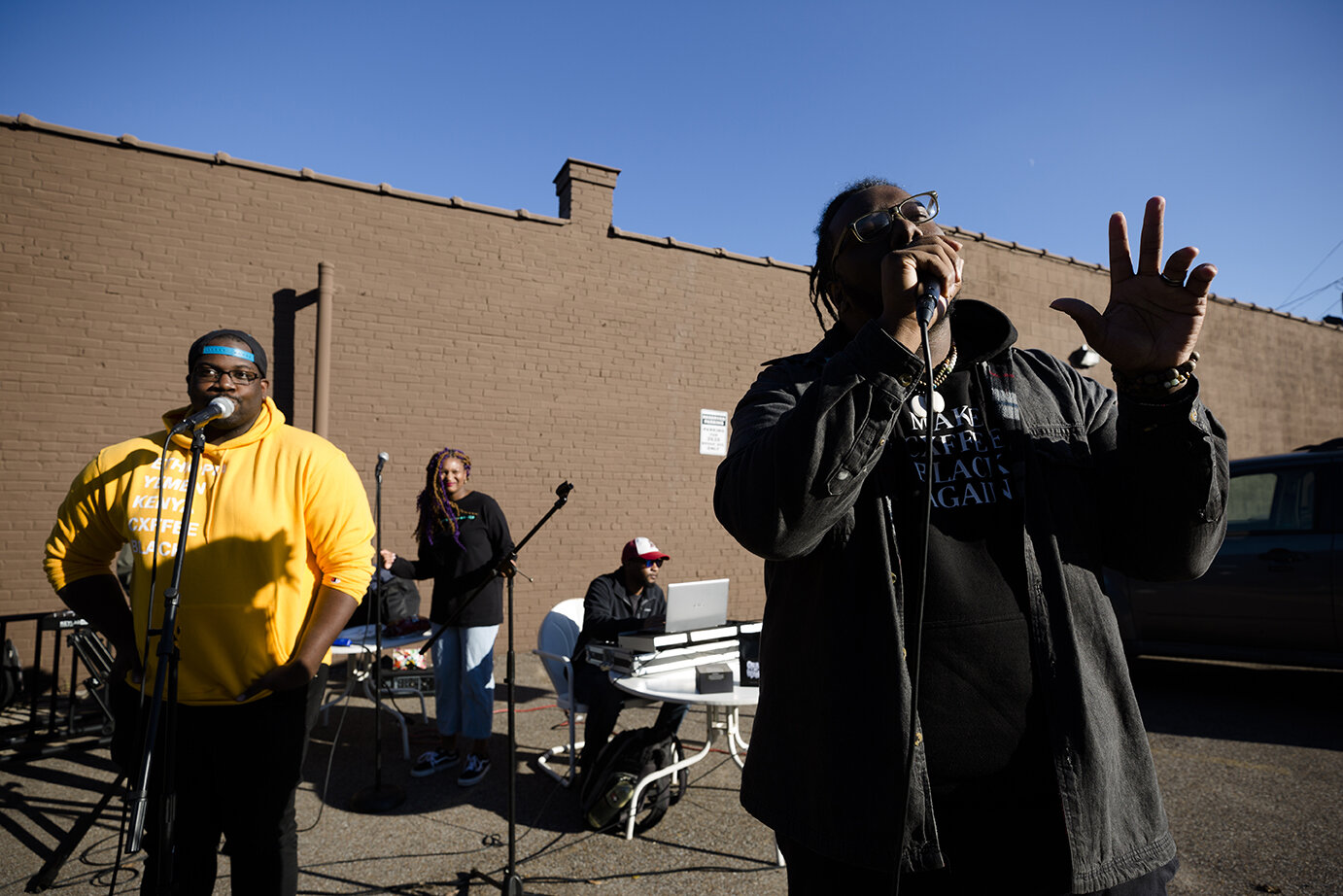 We always felt that coffee could be the most natural extension of our blackness, a natural extension of the uncouth creativity birthed out of lack and raw talent. One of the biggest revelations for me on my coffee journey was learning that coffee is not a generic burnt bean, but an African seed. For most of human history, since the fruit was discovered in Ethiopia, people have purchased the seeds raw and then roasted and brewed them in their own homes. In fact, in Ethiopia right now, coffee is sourced, roasted, ground and brewed by most citizens. It’s not a mysterious delicacy held for the bourgeoisie, but rather a rather a passion and craft for the people.

The basic premise of what we’re labeling fourth wave coffee is that the elevation of product and indigenous personhood go hand in hand. There doesn’t have to be a dichotomy between quality of product and producer and the dignity and elevation of community and consumer. To quote Dr. King, our idea is that, in all aspects of creation, “we are all caught up in an inescapable network of mutuality.” There can be no real empowerment of black and brown folks’ ancestral homes and cuisine without the elevation of their marginalized descendents across the border. 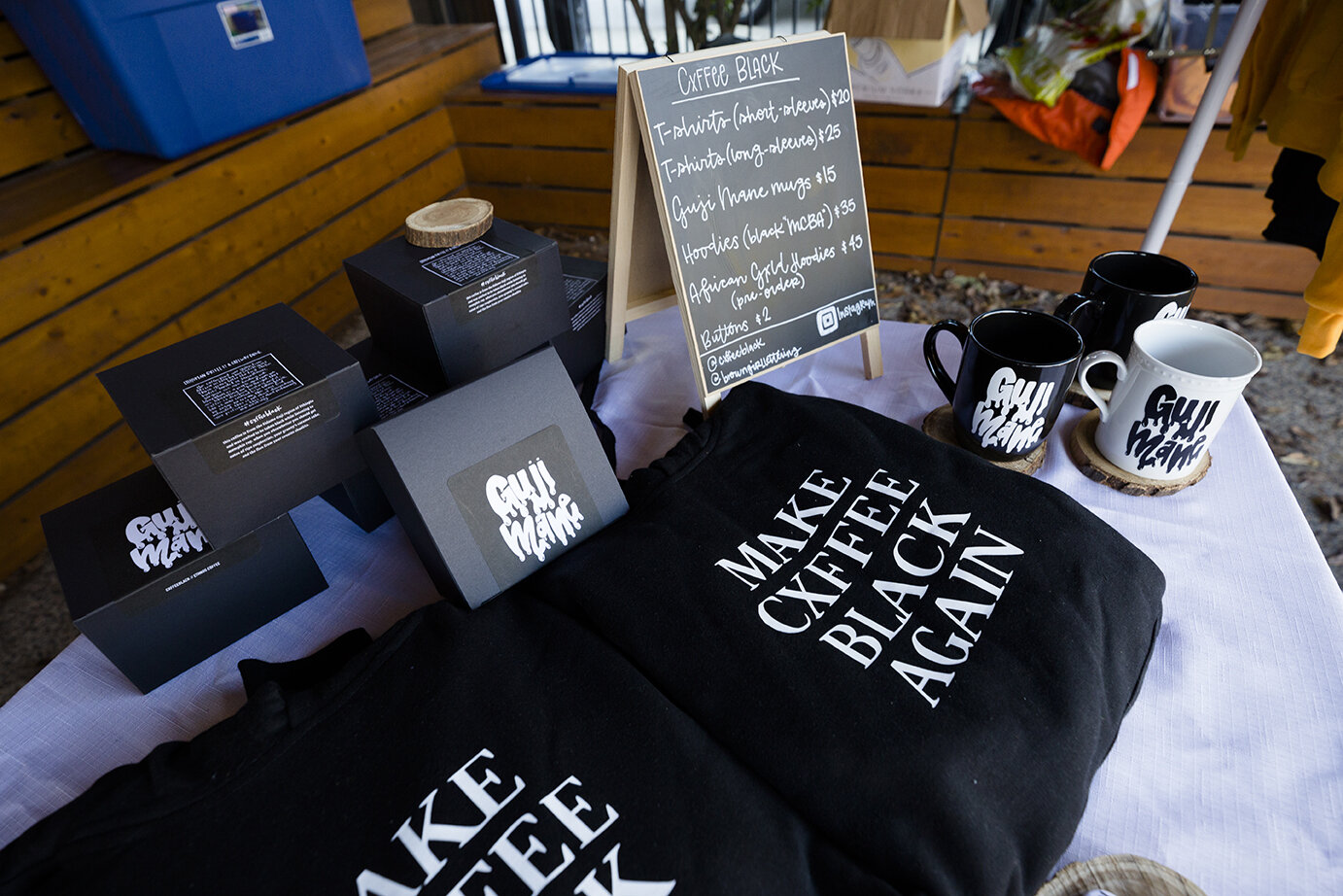 This too is fair trade. Quality coffee should empower everyone involved in the process: from seed to shop to cup to community. I think it’s high time we imagine what that could look like, especially in quickly gentrifying black and brown communities. That starts with hip hop, and, if you ask me, it sounds something like a soul sample over Latin trap.

Here are a few guiding principles based on some shops I’ve seen already employing these practices and some ideas we’ve been cooking up with the Cxffeeblack squad: 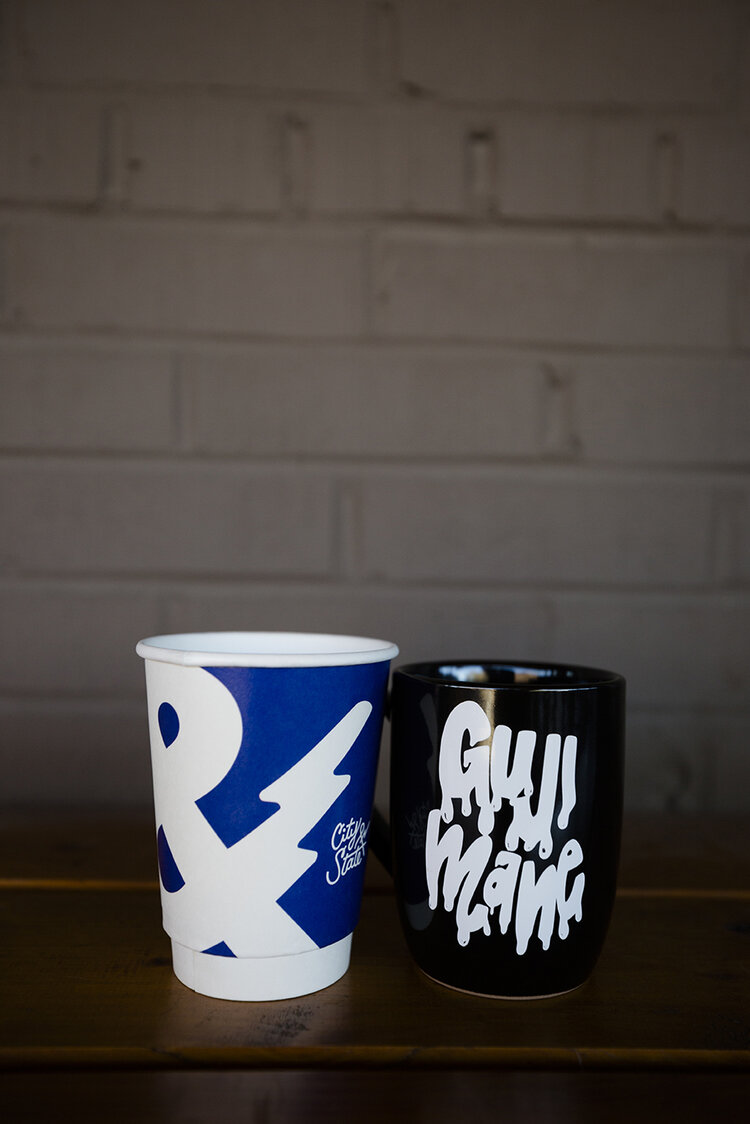 Brian, who I mentioned earlier, served as community liaison and head barista for our first pop-up. He asked us if some of our ideas about fourth wave coffee could possibly displace the value of the modern barista. I understand the need to continue to fight for black representation and equitable barista treatment. However, I think this idea we’re calling fourth wave coffee makes well-educated and well-compensated baristas even more relevant.  In many ways, third wave coffee is very restrictive: no sugar, no cream, no cash (debit only), limited hours, no diversity. They do this to protect the aura of the coffee. However, the goal of fourth wave coffee is actually to view pulling flavors out of coffee from the perspective of highlighting the possibilities in coffee, and from this create a culture that focuses on creating possibilities instead of limitations. 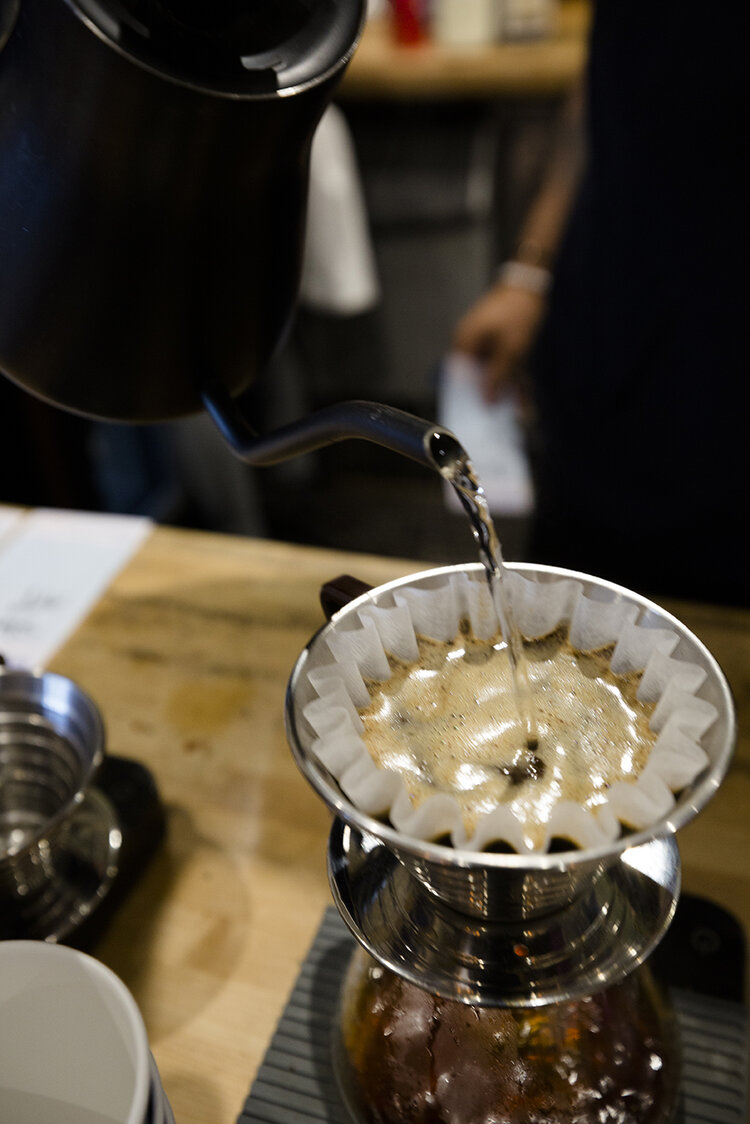 Today’s reality, though, is that in most communities of color, baristas still are seen as agents of gentrification and colonization. They can represent everything wrong with coffee culture—but it doesn’t have to be so.

In our first 10 days of creating Guji Mane, a pro-black coffee, over 90 percent of our sales were to black folks. It provided a really dope opportunity to empower them with something that they participate in every day. 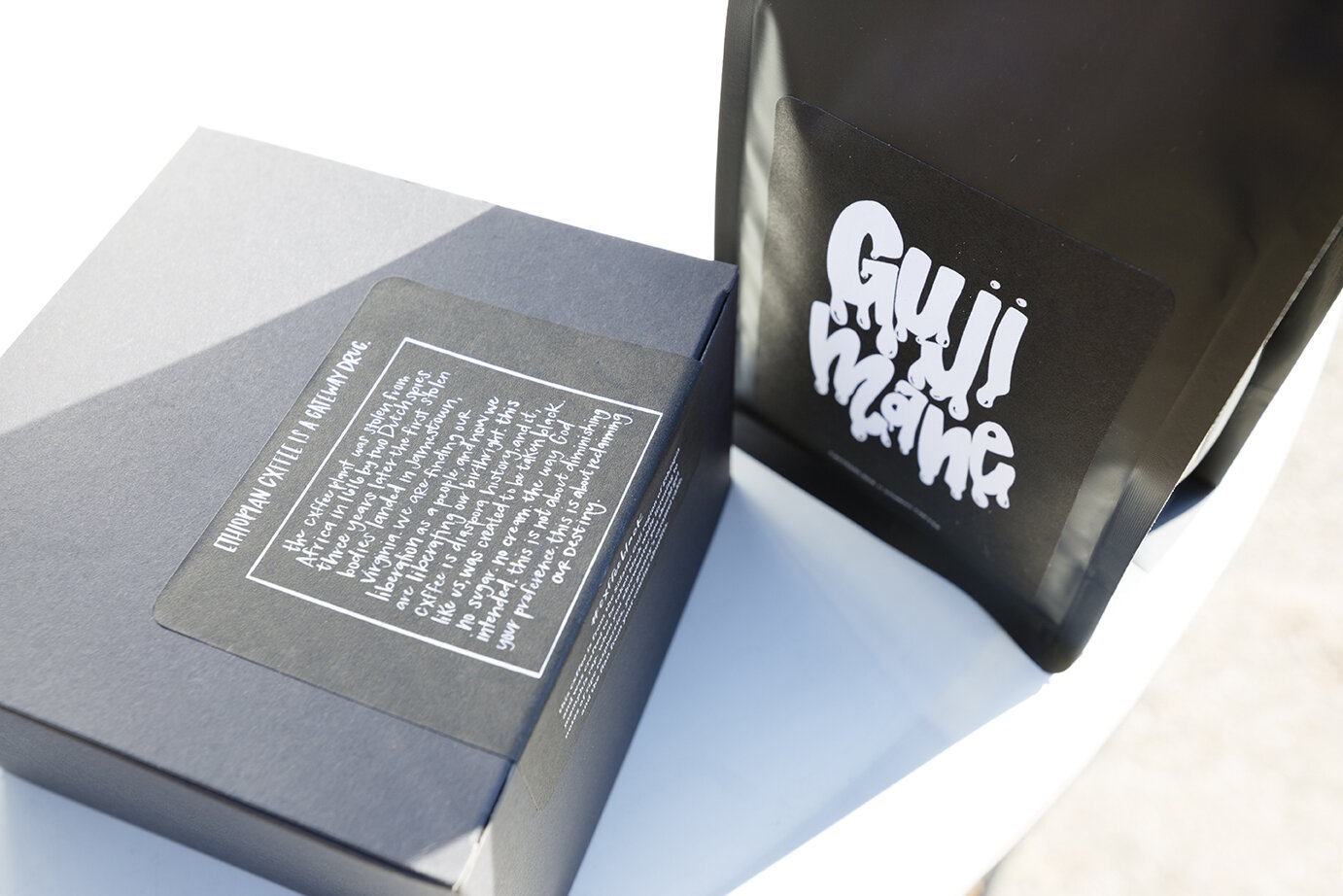 This opportunity is not unique to Cxffeeblack or Guji Mane or Memphis. I would argue that doing this actually gives people more joy and passion for the craft, more passion to invest as baristas and more understanding and willingness to support their cousins on the other side of the production chain. Every barista has the chance to view sharing coffee in communities of color as an opportunity to hand people a beautifully crafted reflection of themselves each day—to drink their coffee black.

Maurice Henderson II (aka Bartholomew Jones) wants to make coffee black again. He is the creator of the website Cxffeeblack, which is a lifestyle brand and a social experiment. He wants people to appreciate themselves the same way he enjoys his coffee—with no additives. @cxffeeblack

The Intersection of Coffee and Booze