0 0
Inspire Café serves up nourishing food, economic justice, and a warm welcome for all

Editor’s Note: Inspire Café is offering delivery and take-out only through March 28 in response to COVID-19 concerns. 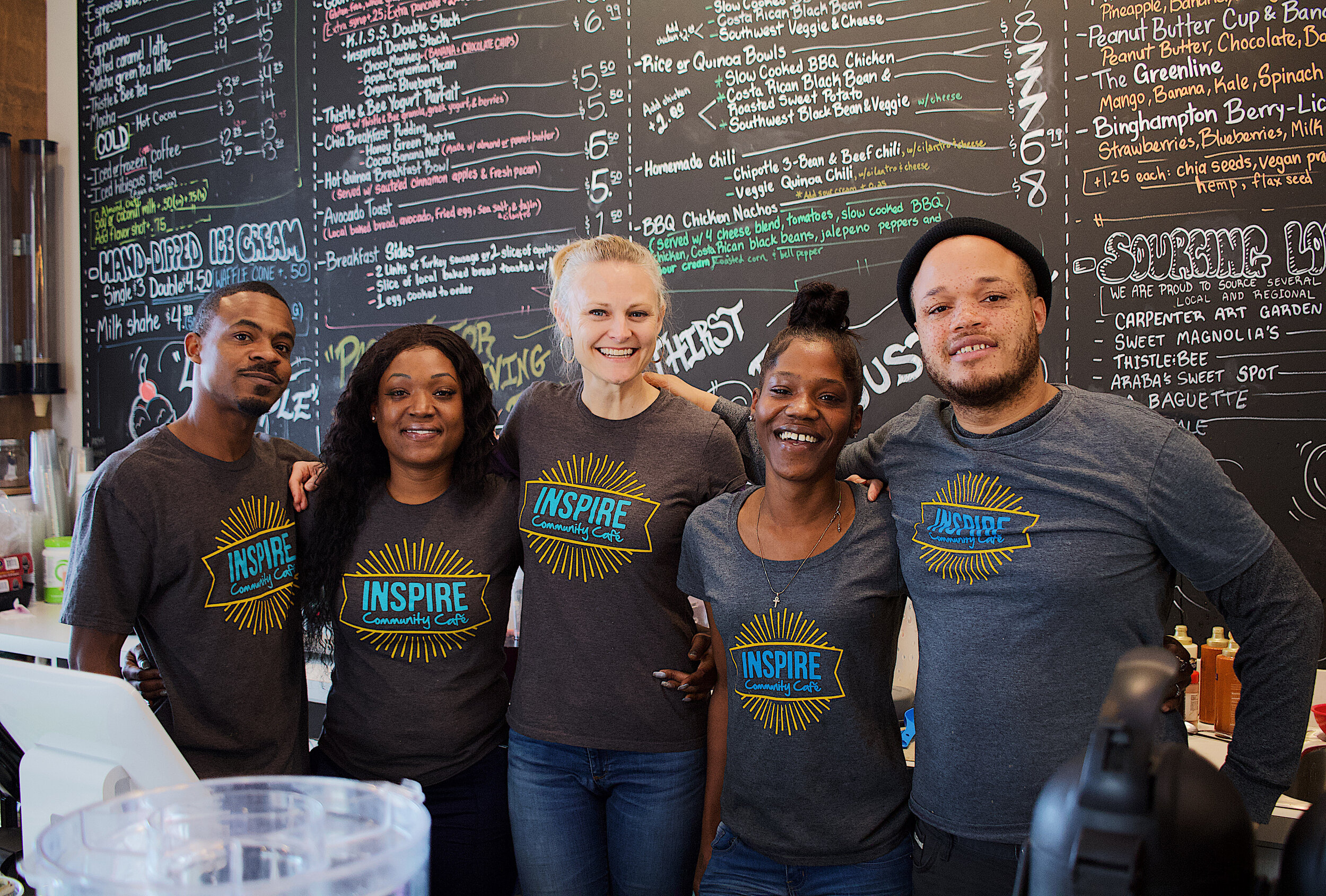 If seeing the word “welcome” isn’t enough when entering a place of business, try being presented with it in six languages—English, Mandarin, Hawaiian, Spanish, Arabic, and Swahili. That’s the immediate handshake and hug you feel at Inspire Community Café. And owner Kristin Fox-Trautman extends the welcome with a smile as broad as the diverse cultures served daily at the café.

If the personalities don’t grab your attention, the menu is sure to intrigue you with its quinoa bowls, fresh salads, gluten-free gourmet pancakes, quesadillas, homemade chili, house-made hibiscus or matcha green tea, salted caramel lattes, and affordable family meals to go.

Inspire Community Café was built around the concept of economic equality.

It was started by Kristin Fox-Trautman and co-founders Terrance Whitley (chef), Charlena Branch (kitchen manager), Jackie Chandler (barista and cashier), and Tevin Whitley (cook). The dynamic team had a mission to create meaningful, living-wage jobs; healthy and delicious food; and a gathering place for local change makers. After many conversations around the dining room table, the team dreamt up a business plan that produced more than just food—it offered a promising and healthy future.

Everything in Inspire’s small, cozy space is intentional and eclectic. The entryway features “merchandise on a mission,” a section designated for local businesses to promote and highlight their missions, services, and products. Local nonprofits offer for sale everything from mugs, T-shirts, and handmade pot holders from youth in the neighborhood to children’s books and gym shorts. (The team directs 100 percent of proceeds back to the organizations.) The dining tables were handcrafted from upcycled pallet wood by the team with the help of a local craftsman. The art dispersed throughout the space was designed by children in the Binghampton neighborhood through a partnership with Carpenter Art Garden. 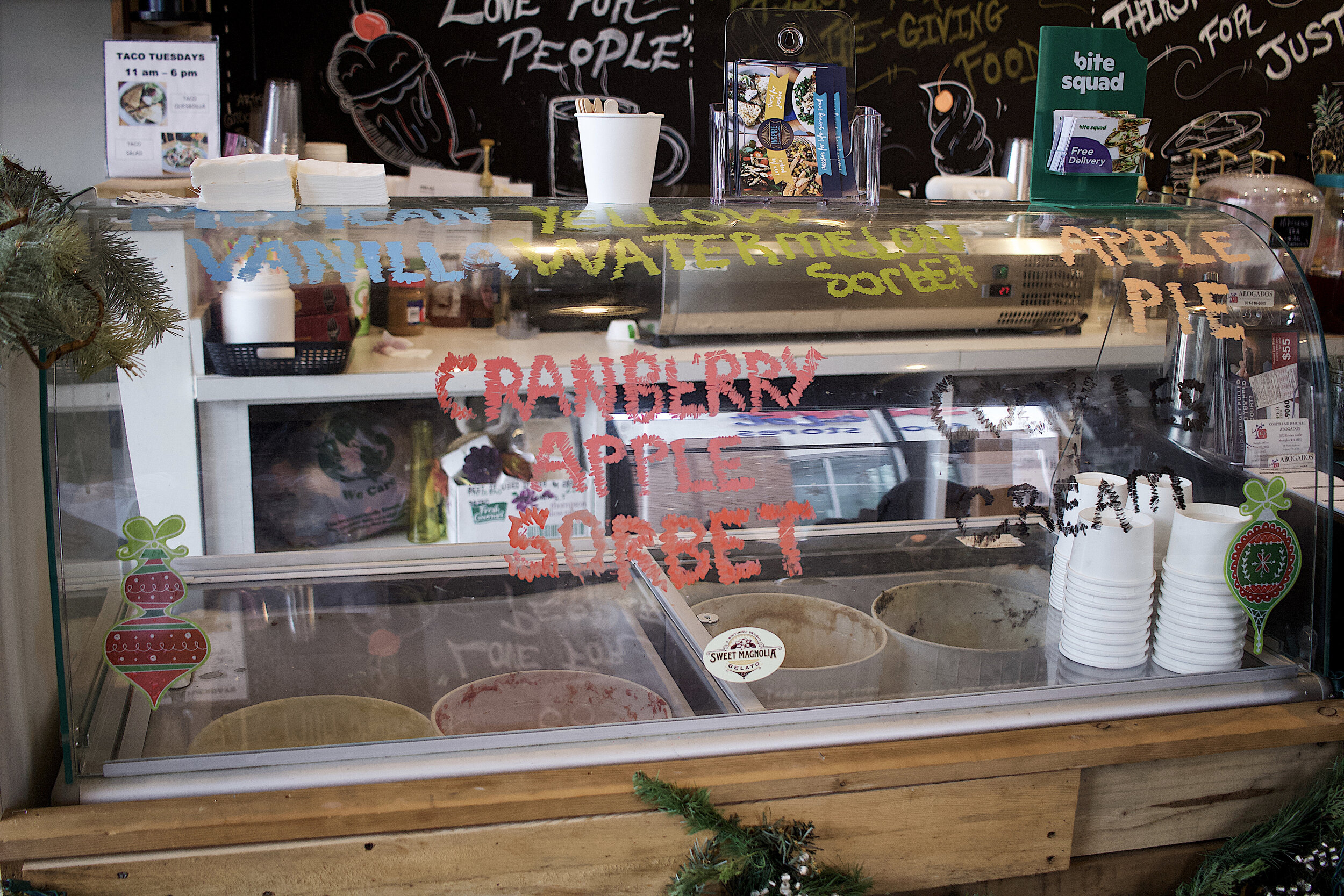 All of the dishes are designed to offer healthier ingredients, with lots of flavor. There are plenty of vegan and vegetarian options, and Taco Tuesdays are a customer favorite.

The team members see themselves as more of a family, with bonds that were made some 20 years ago.

Terrance, Charlena, Jackie, and Tevin crossed paths with Kristin at St. Patrick’s Catholic Church in downtown Memphis, and later at Sacred Heart Church, where she was a young adult and youth leader. Their weekly youth group provided a space where they could share healthy meals, meet immigrant families from different ends of the earth, have open dialogue about world events, and study the Bible.

Terrance recalls meeting Kristin when he didn’t always always know where his next meal would come from. He was sleeping on a friend’s couch and hanging with the wrong circle of people. When he was in his early 20s, Terrance landed a job as a dishwasher at South of Beale. Two chefs who worked there asked Terrance if he wanted to learn to cook. His first dish was a grilled steak, seasoned with salt and pepper. From then on, Terrance took to the grill often, preparing made-from-scratch, hearty meals.

“I don’t consider myself a chef. I just know how to make food taste good,” he says.

Kitchen manager Charlena is an introvert who describes Kristin as the glue of their family. She says Kristin exposed them to countless volunteer opportunities, out-of-town trips and conventions, and the overall spirit of giving back. “I am truly thankful for all Kristin has done for my family and others in the community,” says Charlena. “She is always trying to solve everyone’s problems.” Charlena worked in a variety of fields, including housekeeping and catering. She experienced an array of what she considers dead-end jobs and wanted something more empowering.

Then there’s Jackie, the barista and cashier who is the creative of the group, with her raved-about decorating skills. Tevin, who once was gripped by a system of incarceration, is now known as the cook and pancake expert.

Lastly, there’s Kristin, who worked in non-profit for 20 years, ending her tenure with over seven years as vice president of youth development at Bridges. She wanted a more flexible work schedule after her youngest daughter was born. Lucas Trautman, Kristin’s husband and a former youth leader at Sacred Heart, was her biggest supporter when she began wishing up a way to create a more just and compassionate community. Lucas is a child psychiatrist, Brazilian jiu jitsu brown belt, and owner of Stardust Jiu Jitsu (housed next door to the café). 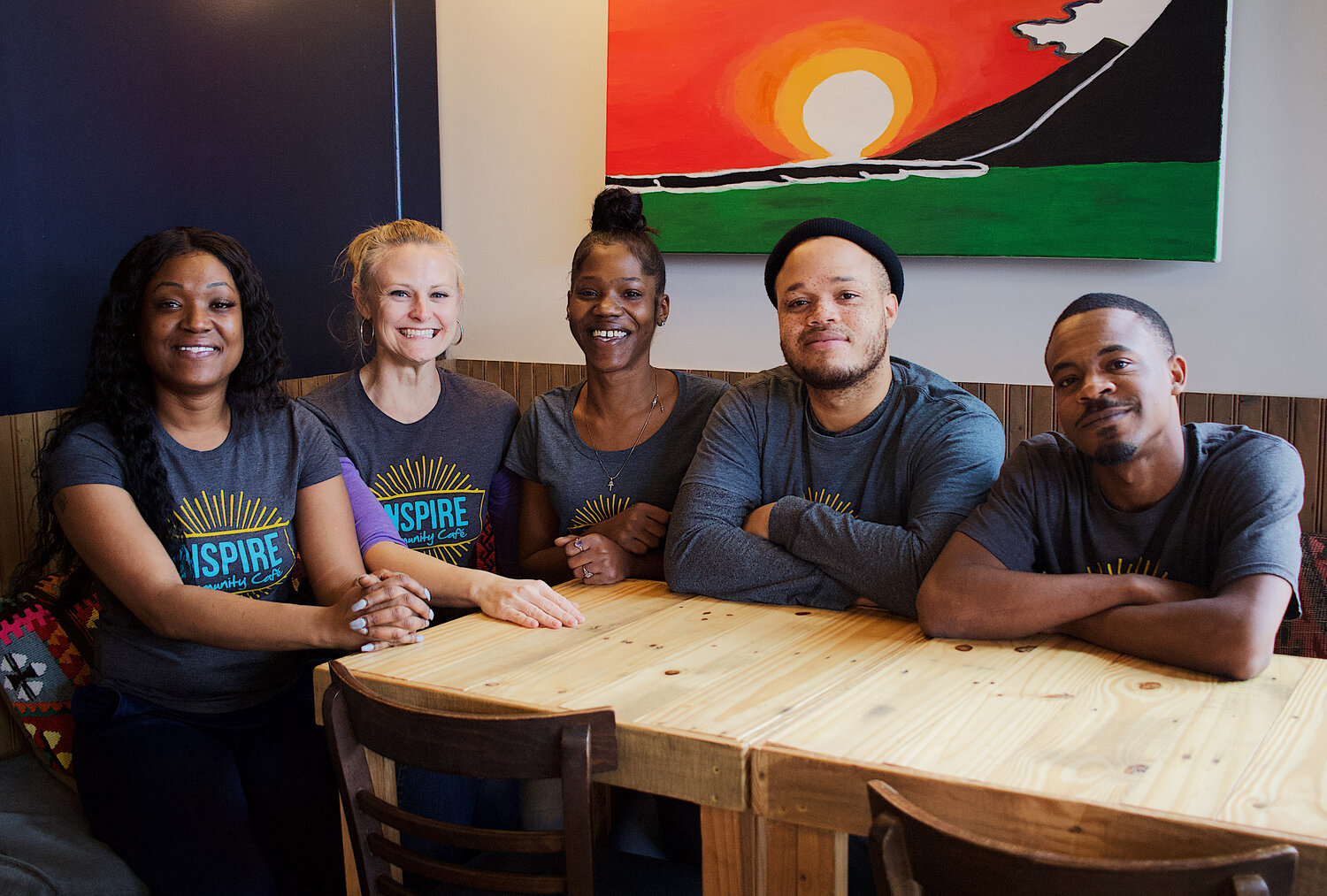 After leaving Bridges, Kristin approached Terrance about starting a restaurant. After including the others, the restaurant idea grew from serving up something different and special for their own well-being to giving back to the community.

They took their personal experiences into account when drawing up their core values for the business—love for people, passion for life-giving food, and thirst for justice. And mixed into all of it was the hope of creating a gathering place and building community. After about five years of conversation, cooking together, and venue-seeking, the team designed a menu, created a profit-sharing model, and made a commitment to pay living wages. “We know a lot of people who work really hard and live below the poverty line,” says Kristin. 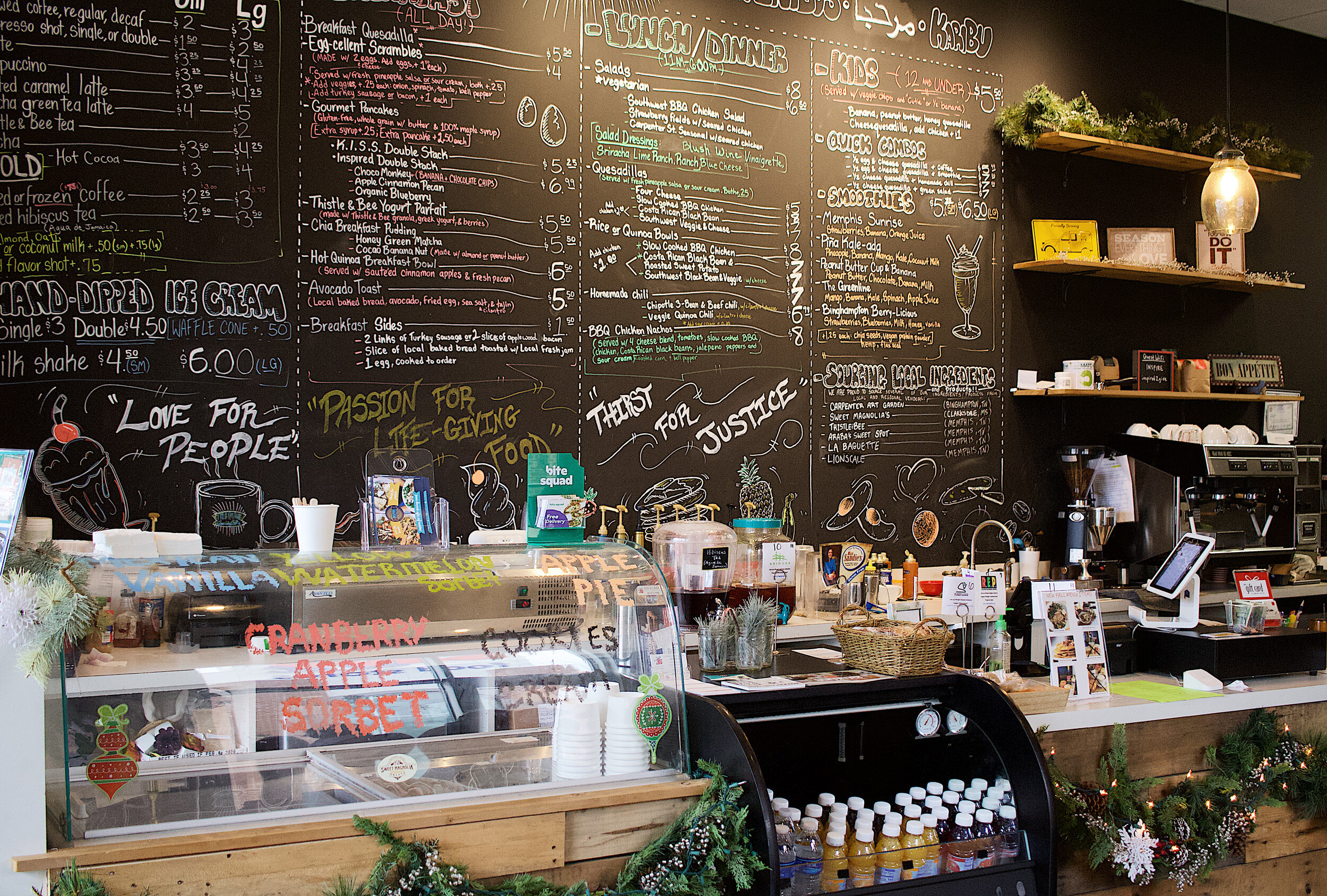 “Our goal is to contribute towards economic justice, which is why we were strategic in pricing our menu items to be profitable, yet affordable for anyone who walks through our doors.”

For its first year, Inspire operated out of a mobile food truck, managed by Charlena. They primarily served Bridges but also traveled to events and other locations. The truck operated a few times a week, just to keep the momentum going until they found a permanent space in a new shopping center at Sam Cooper and Tillman. 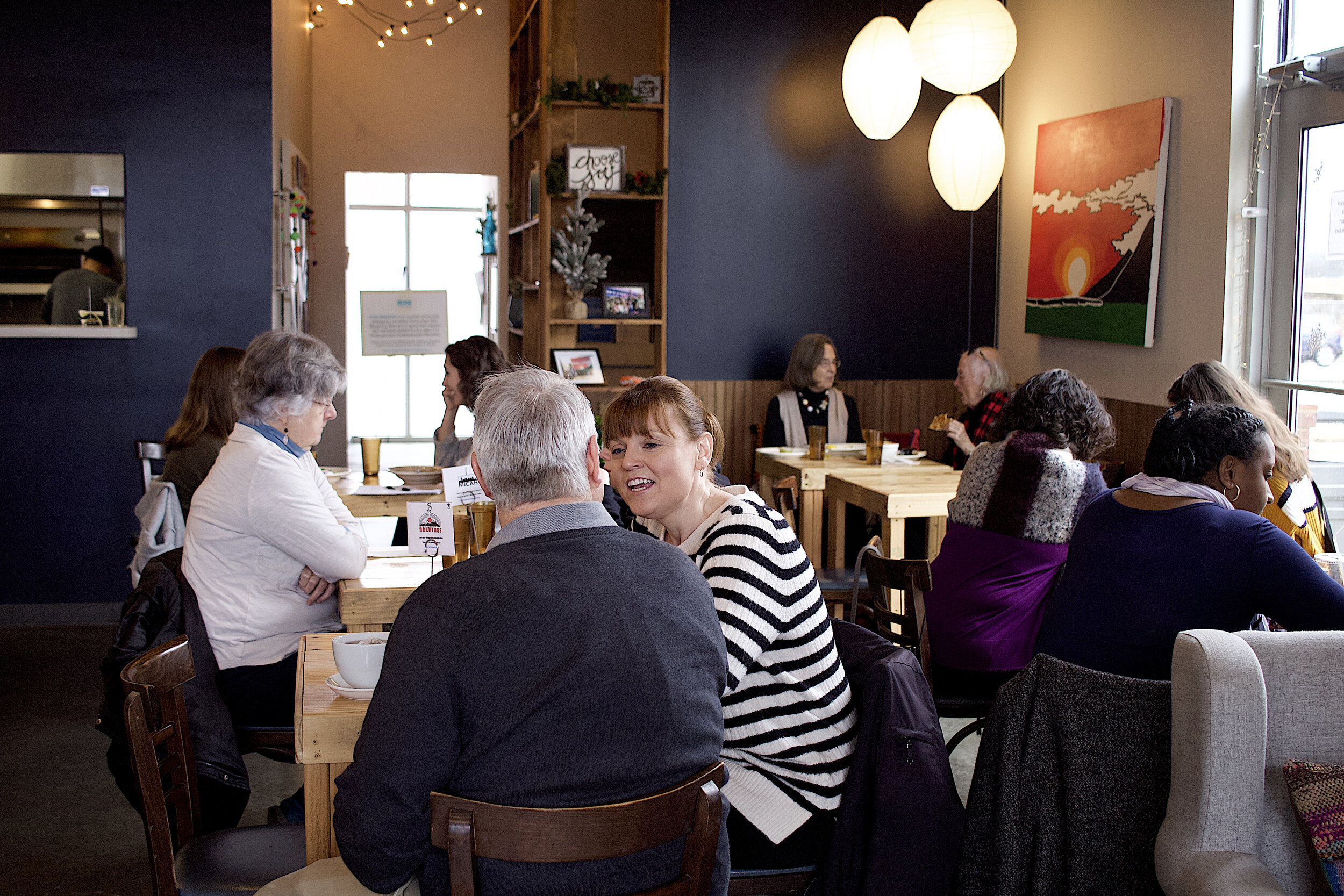 Kristin and Lucas had connections and friends in the Binghampton community—including refugee families who had settled there. The couple recognized the under-resourced food desert and wanted to add access to fresh and healthy food.

Inspire’s brick-and-mortar location opened on January 4, 2019, and recently celebrated its one-year anniversary. “Opening day was an exhausting and proud moment, bringing out a huge crowd, and now our anniversary has given us time to reflect and celebrate,” says Kristin.

“We hope people in Binghampton feel valued, knowing this space is for them. The community has inspired us, and it’s been very humbling. To have them welcome us into their community and say ‘we’re glad you’re here’ lets us know we’re doing something right.”

The team is currently completing the Project Green Fork certification. “We want to continue to pour into the space and are eager for the profit-sharing to kick in so our team members can start living some of their personal dreams, such as home ownership,” says Kristin. “We’re excited to continue expanding our food offerings and reaching out more to Binghampton residents to get them to see this as their home away from home.”

Erika Cain is a communications vet with chops in writing, public relations, graphic design, TV, radio, and brand strategy. She is a skilled storyteller and has been a trusted adviser to executives and companies for almost two decades. Erika founded GIRL 24, a business mentoring initiative to help build a culture of gifted and ingenious female leaders. She is a spouse, mom, speaker, community volunteer, and member of Junior League, and loves dissecting brands. @ecain_co

Meka Wilson is a Memphis photographer whose work focuses on capturing the rawness and natural beauty of her subjects. Meka works with nonprofits, restaurants, and other clients in Memphis to capture photos and videos. She loves taking photos and loves the positive response she gets from clients when they see the finished product. @pixbymeka

All’s Fair in Love and Sandwiches… and Bi Bim Bop