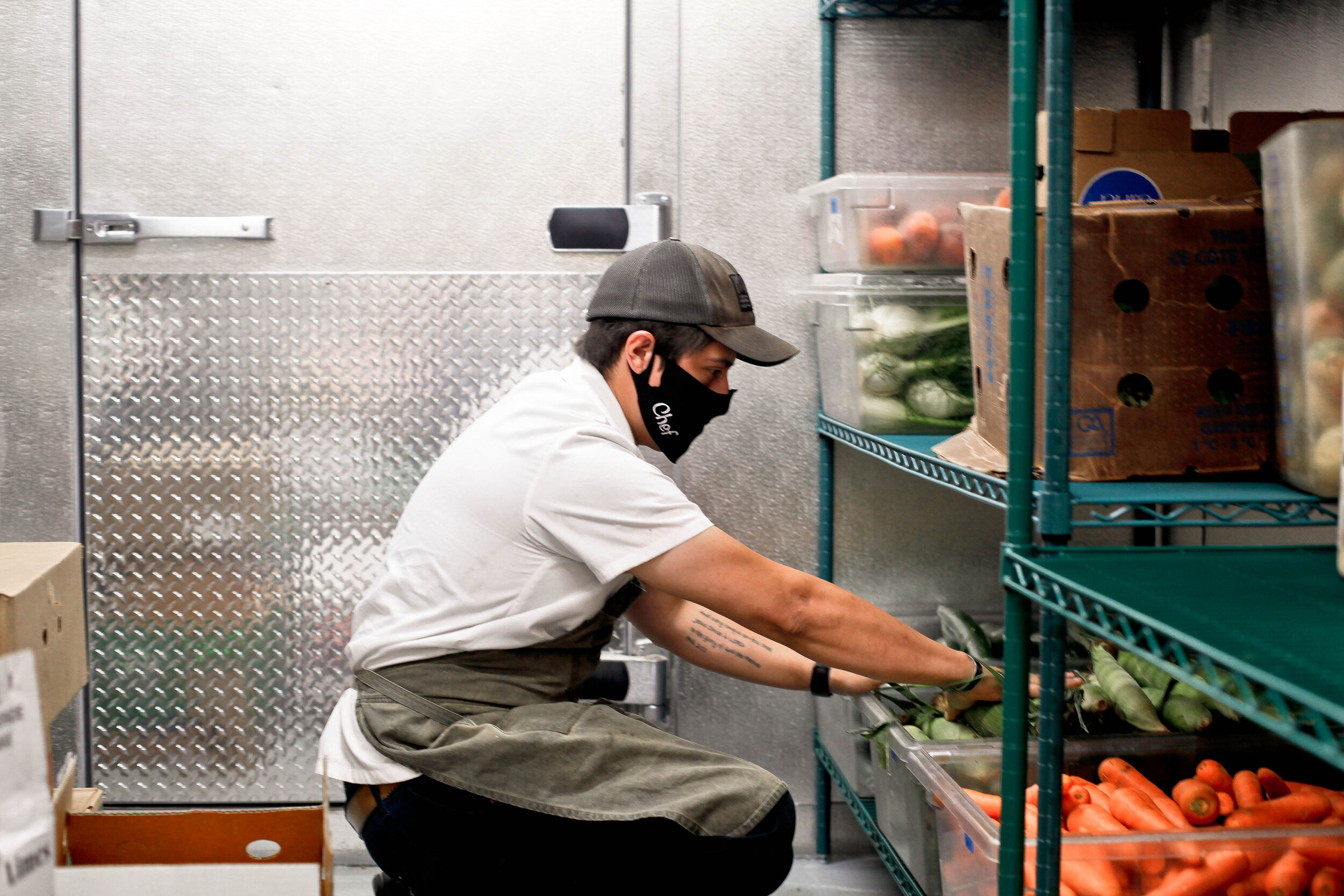 Life has taken Jesus Ramon to Mexico, California, Memphis, Southaven, and even Japan. And, as Southall Cafe opens, he’s bringing all those experiences with him to his role as head chef.

His journey to chef hasn’t been a straightforward one. Detours have included time served in the Marines and being furloughed from restaurant work at the beginning of the coronavirus pandemic—an occurrence that almost made him change career paths altogether.

But he’s thrilled to be at the helm of opening a new restaurant, and he’s full of ideas for the future. He’s curated a menu that features Southern and seasonal food with tastes of his Mexican heritage woven throughout. And he’s proud that many of the menu items can be adapted for vegan or vegetarian diets. While Southall is focusing on breakfast and brunch for now, Jesus looks forward to experimenting with ticketed private dinners focused exclusively on Mexican cuisine—including a Day of the Dead pop-up dinner.

We sat down with Jesus as Southall was preparing to open. The space was abuzz with masked employees training, seasoning equipment, and organizing supplies. We loved hearing Jesus’s story and hearing about his vision for his new restaurant. We think you will too! 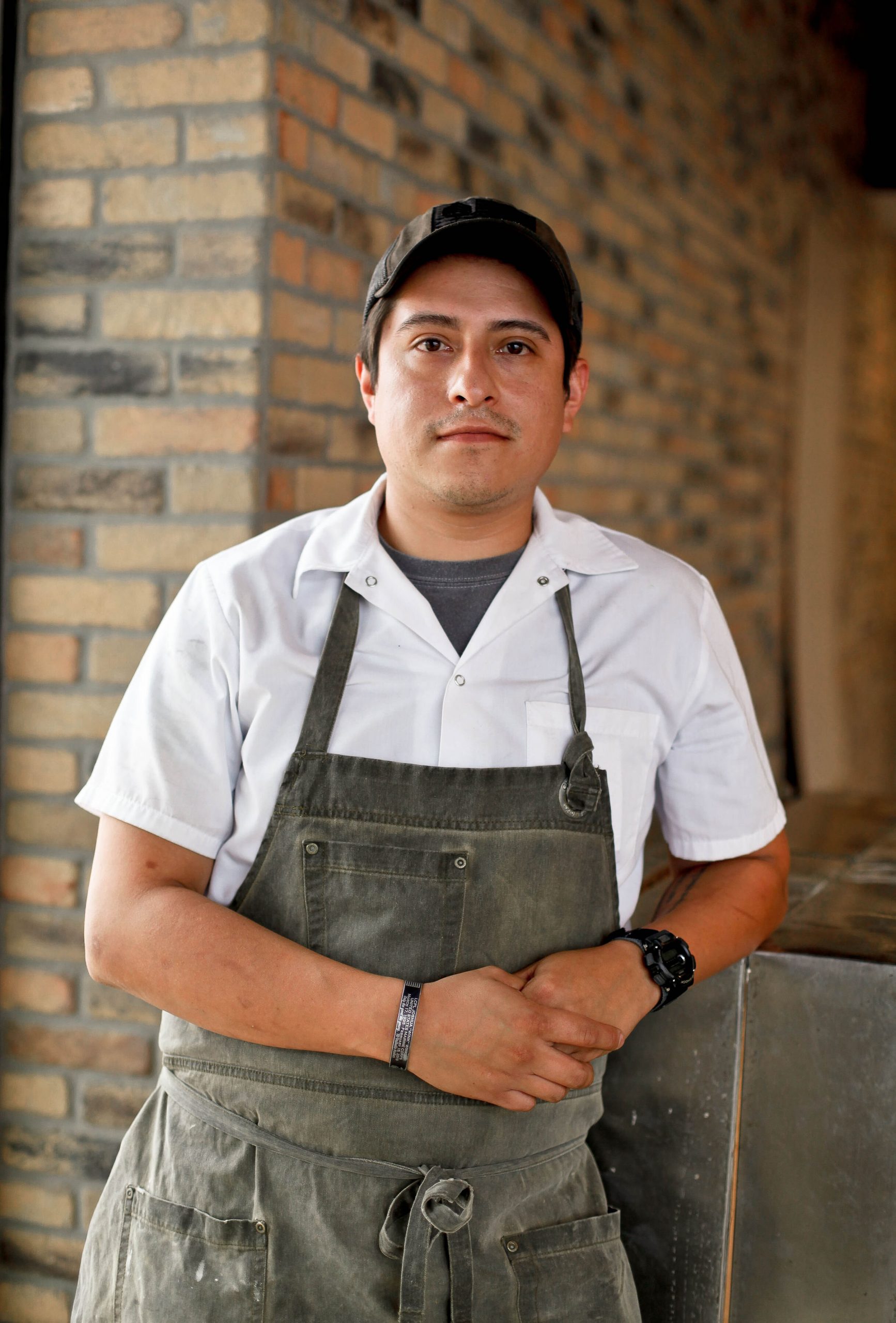 Where did you grow up? How did you land in Memphis?

I was born in a little town outside Mexico City. My parents moved to the San Francisco Bay Area before I turned one. We moved to Southaven during my freshman year of high school. I finished high school in Southaven, took six months to rest, and then went straight to culinary school at L’Ecole before it shut down. But then, being a young cook in Memphis, working different kitchens, I felt like I wasn’t getting anywhere. Certain chefs just need someone to hold down their station, and there’s no real room to work up the chain. I worked two jobs in two different kitchens just trying to make rent. My passion was burning out, and I didn’t want that to happen. I took a step back and joined the Marine Corps. I didn’t think I’d cook again.

Tell us more about why you chose the Marines.

I had grown up watching Marines on TV and seeing how disciplined they were. When I was 17, I wanted to join. I tried, and my parents wouldn’t sign the papers. By the time I was old enough to enlist, I was deep in the culinary world. When I got burned out, I was 22 and still young enough to go. 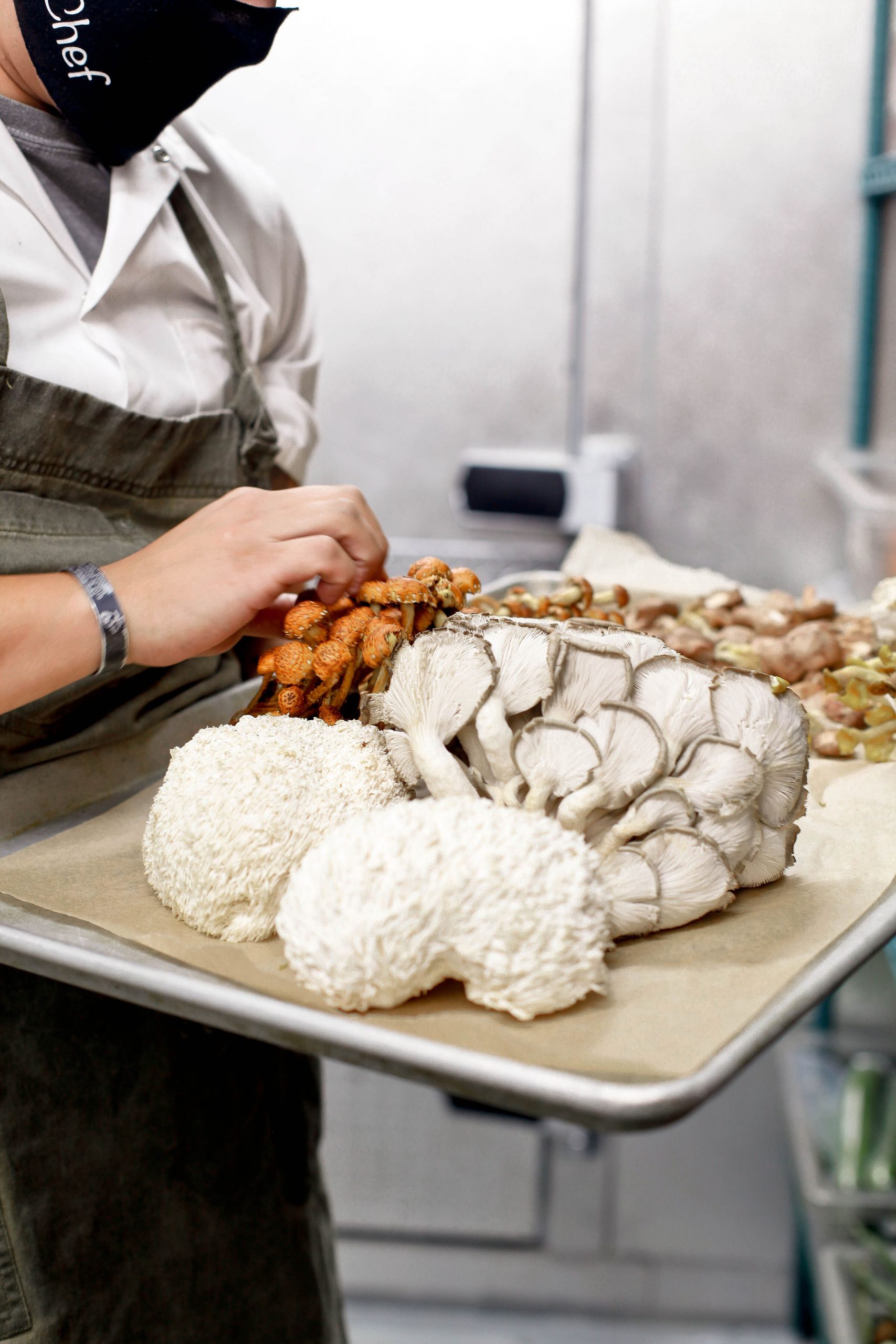 How did you get back into the food world?

The Marine Corps sent me to Japan for two years. Tasting their food, seeing how proud they are, how they interact with their food—when I got out, I decided to go 100 percent. I jumped into a kitchen there in Virginia Beach to see if I could hang with the cooks and got offered a sous chef position. When my wife got out of active duty, I moved back here. I did pop-up dinners on my own, worked as kitchen manager at El Mero, and then helped open Bishop.

You went to culinary school right out of high school. How did you get interested in it so early?

No one taught me to cook.

I never cooked with my mom. In my culture, it’s not something the men do; the women do all the cooking.

One day I woke up early on summer vacation and was really hungry and didn’t want to wake my parents, so I made pancakes out of a box— that was fun! I would help my dad when he was grilling. Then Dad started watching food shows, and that’s when I realized it could be a career. My parents weren’t big on the idea of me being a chef. They wanted me to be a lawyer or doctor. Cooking is a blue-collar thing in Mexico. It wasn’t until I got my first paycheck that they realized it could be something. Now they’re all for it.

Do you cook for your extended family?

I do requests. But for the most part I just go home to eat my mom’s food. Her flautas are always perfect—crunchy, juicy, tender chicken, covered in cotija cheese, avocadoes, and salsa verde. 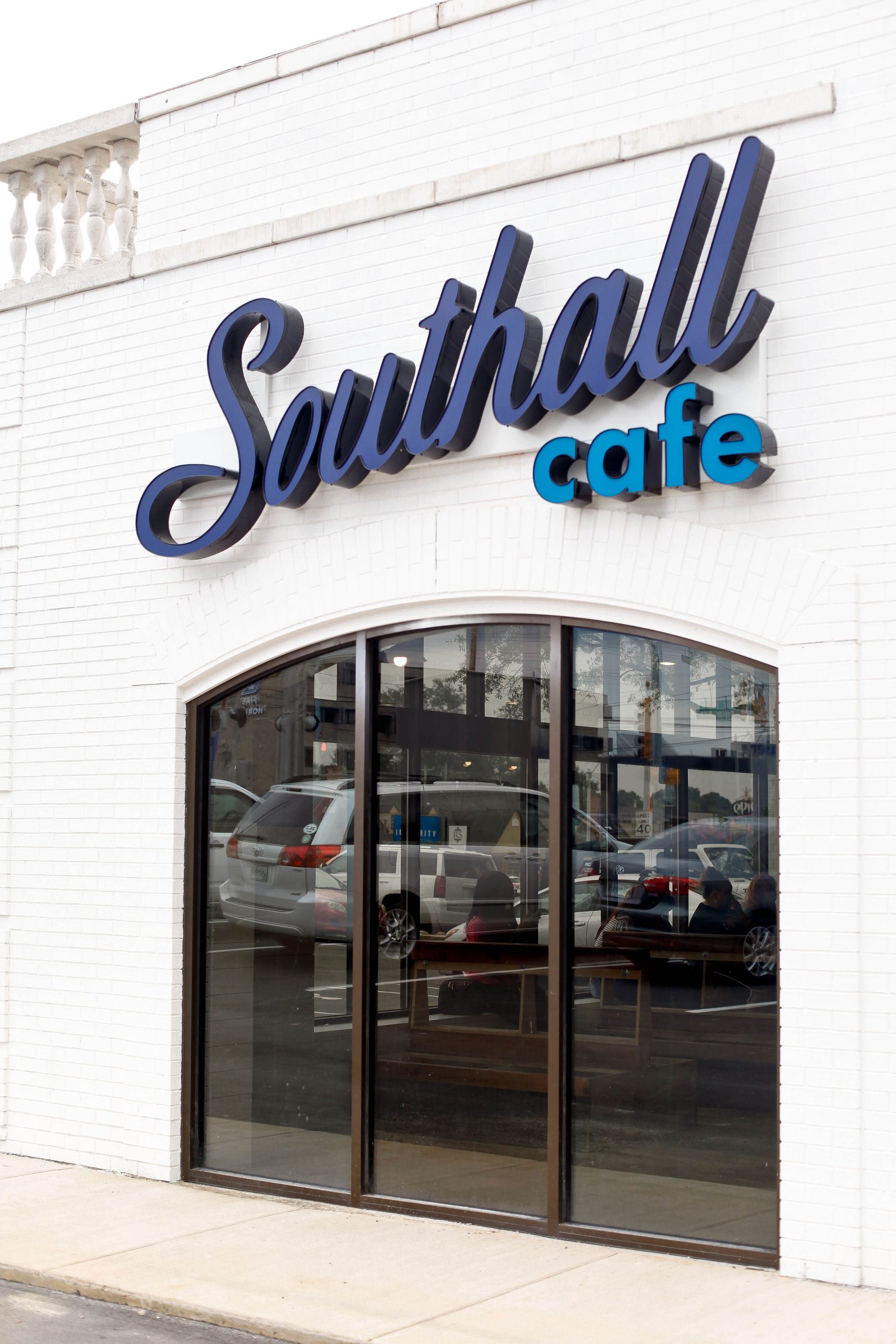 COVID-19 has been tough on the restaurant world. What has it been like for you?

I was part of the crew that helped open Bishop and was there until the pandemic hit. I was supposed to be sous-chef, but then Hog & Hominy burned down and a lot of their chefs moved over to Bishop. My spot got taken immediately. Then I was furloughed once COVID hit. I thought I would always have a job in restaurants, but COVID showed that restaurants aren’t essential. I was about to enroll at the University of Memphis for a different career—microbiology. As a last-ditch effort, I filled out every chef application online, and Mark [Pender, co-owner of Southall] called.

What’s your vision for this restaurant?

The concept for the food is breakfast and brunch—Southern and seasonal with my Mexican twist. We’ll have a full cocktail menu and a full patio to seat 64 with misters and fans. Two of our head bartenders work at Catherine & Mary’s too. 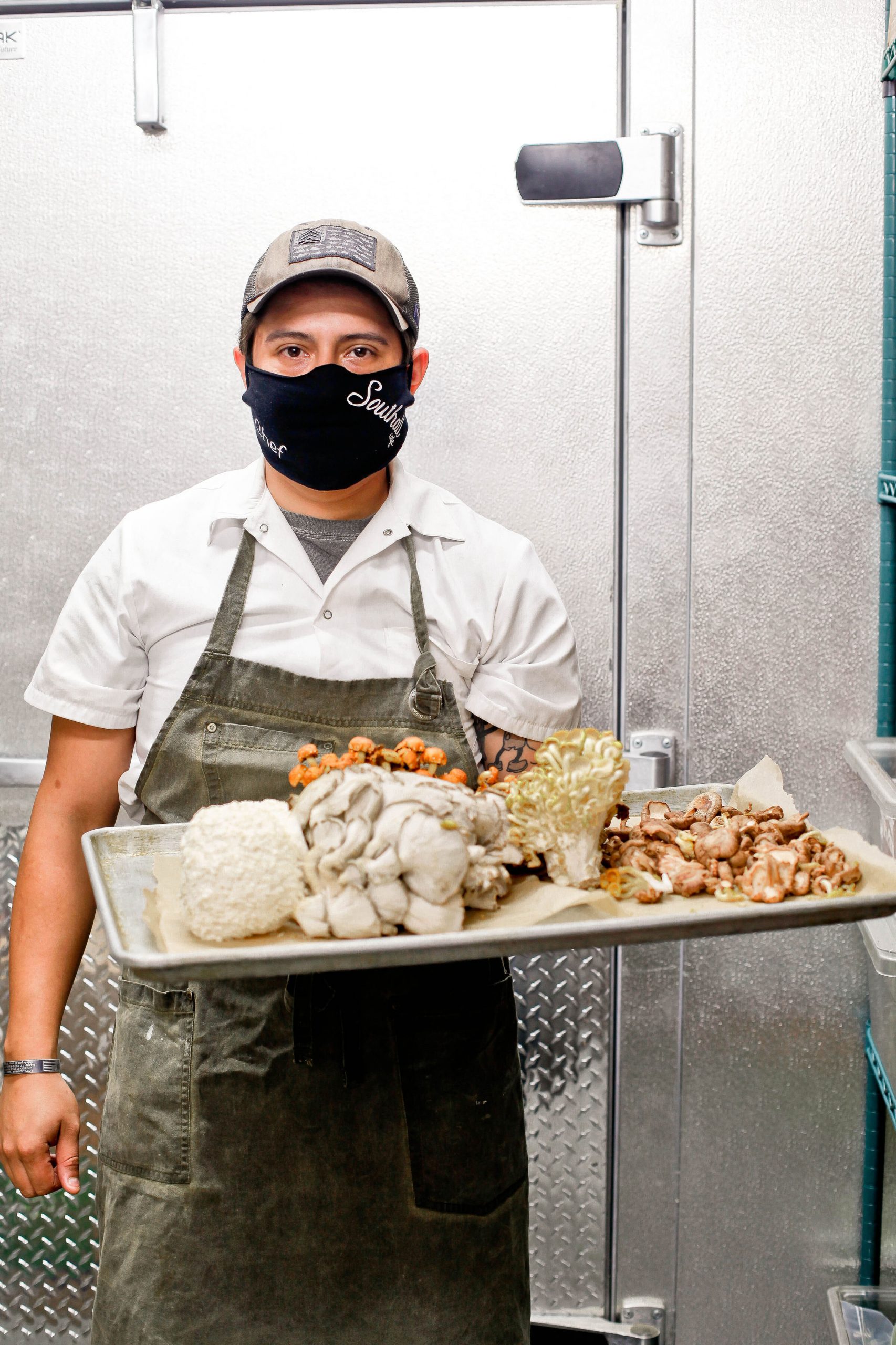 Tell us more about that combination of Southern, seasonal, and Mexican.

I’ve made contact with local farmers and realized I can get ingredients used in Mexico that I didn’t realize were available here.

I’ve found milpa—popcorn shoots that are really sweet and taste like corn— to use throughout the menu. We’ll have a tomatillo-cucumber gazpacho; the Southerness for that is that the protein filler will be crawfish. A lot of the menu has little touches of my Mexican background. We’re gonna do a country pâté but instead of wrapping in bacon will wrap in squash blossoms; the proteins and spices in it are things I worked with when visiting my family in Mexico. I’m calling it the Hidalgo Pâté, after a little town up in the mountains where my father is from. It’s going to be really pretty and colorful.

You have plans to make a lot of your menu elements in-house, right?

We’ll be curing and smoking our own hams in-house. We’ll make our own gravlax in-house for one of our Benedicts. My best friend, Donald [Stocker], was assistant pastry chef at Bishop and is head baker here. We’ll eventually be doing desserts, sourdoughs—all our breads—and have a display out front to sell Donald’s bread. We’ll have raised beds behind the restaurant to grow our own specialty herbs and vegetables.

What’s it like to be opening a restaurant during a pandemic?

It’s been kind of easy actually. We stay up to date with the CDC and will have all of those guidelines on how to operate safely in place from the beginning. All our projections are based off of half capacity.

We see it like a really long soft opening.

By the time we get really busy, we’ll have a system for everything. We hired three delivery drivers for a three-mile radius and have a dedicated curbside pickup area. 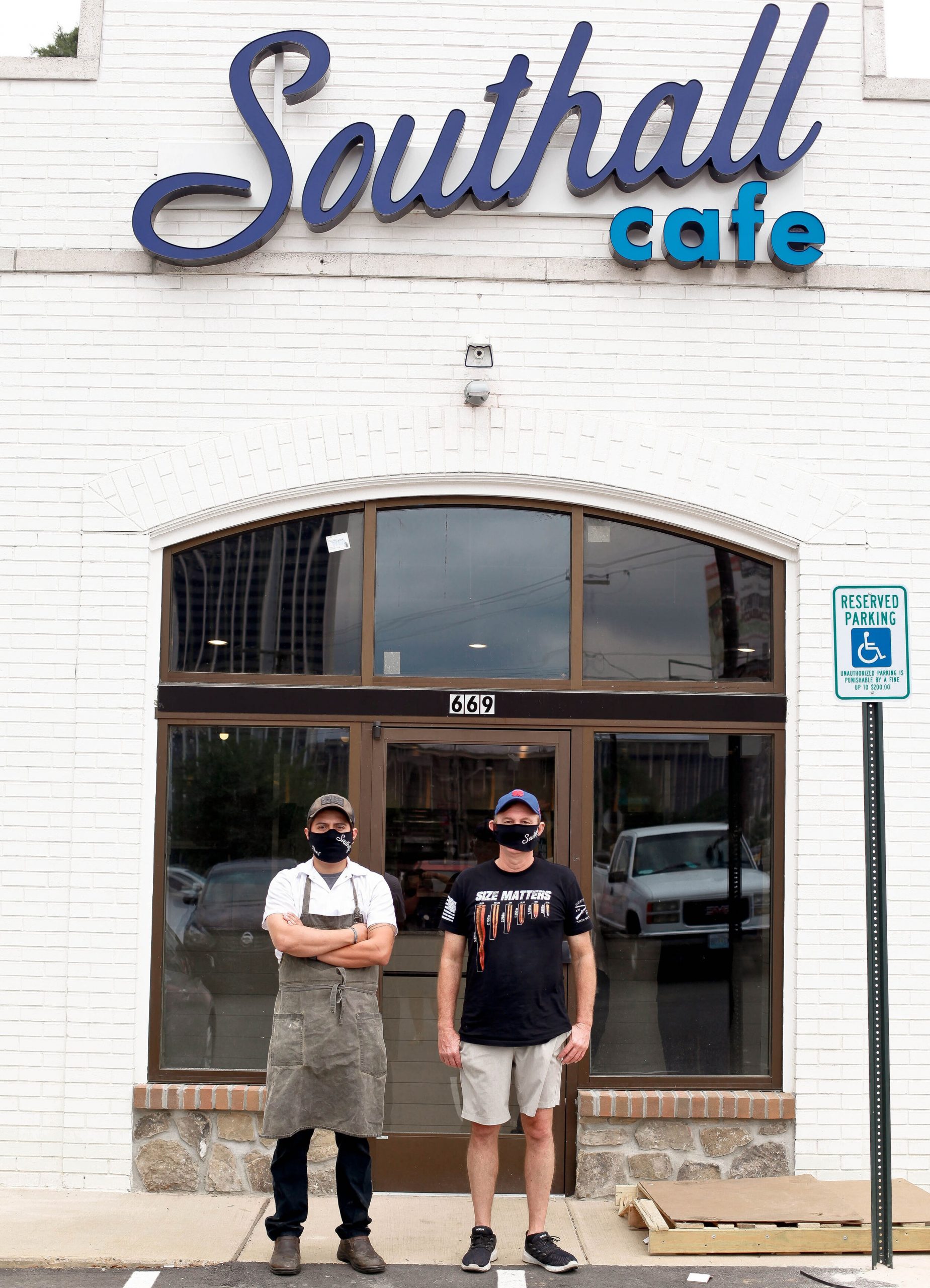 This is the first time you’ve helped to open a restaurant as head chef. How does it feel?

It feels great. I’m having to pull from everything I’ve ever learned to get things done.

What makes you nervous?

This is the first time it’s 100 percent my menu. I hope I can keep the standards that were taught by people before me.

What have you learned so far in your career?

If you’re a younger cook, take a break before you get burned out. A lot of my peers have quit cooking because they never took a step back to breathe. It’s draining.

What’s one thing you do to keep from getting burned out?

At least once a year, I take my family on an R&D trip back to Mexico. We go to a new area every time. That helps keep everything fresh.

Tell us about a recent trip.

We went to Hidalgo, where one of my grandmothers lives. My great aunt is a baker there and bakes bread for the whole town. She has her own brick oven that’s outside her house that’s been passed down from generation to generation. They do everything by feel—no recipes. I helped butcher the lamb for barbacoa. I was there for the whole process.

It definitely gives you a new perspective on the food; it makes it more intimate.

You see the animal and don’t want anything to go to waste. 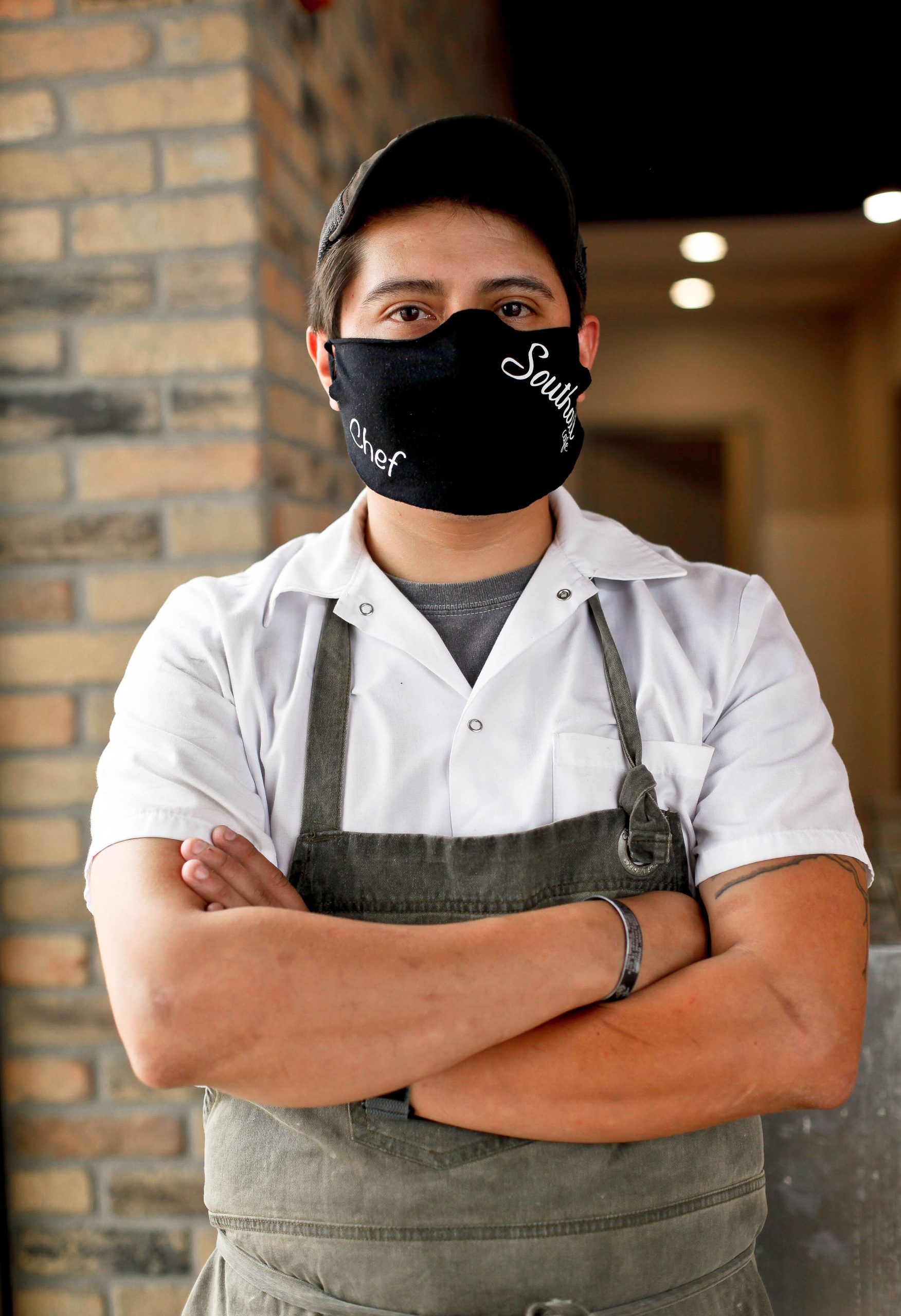 Being the chef/owner of a Mexican restaurant with a Michelin star. That’s the goal one day. But I have to take it step-by-step. It depends on whether I can get Michelin down here. For some reason, they don’t come through Memphis. But, hopefully, with all the chef talent we have in Memphis, we can catch their eye. It’s just a matter of time.

Michael Francis from Heart and Soul catering. He was the first one to give me a sous-chef position.Throughout my two years there, he helped me build my confidence in my own food. He put new responsibilities on me, and, if I got out of line, he put me back in—but I always learned something.

What’s your favorite thing about Memphis?

I’ve never seen a town so supportive of their community.

If you could have lunch with any Memphian, who would it be? Where would you go?

Tim Howard. He’s the co-owner of 901 FC. My dad was a semi-pro soccer player in Mexico, and he always played goalie. I’d see if he’d let me cook for him.

What really matters to you?

My son, Daniel. And, honestly, balancing the goals I have set with my family life. I’ve seen so many chefs devote themselves to one or the other. I don’t want my inspiration and my creativity to die, and, at the same time, if I can do it right, as Danny grows up, he can see that, whatever you’re passionate about, you can make it a living and reach your goals.

Kim Thomas is a lifestyle blogger and photographer based in Memphis. Launched in September 2010, her blog, KP Fusion, provides of-the-moment fashion, style and beauty tips and trends with a little Memphis flavor thrown in. @kpfusion

Are the Scales Tipping?