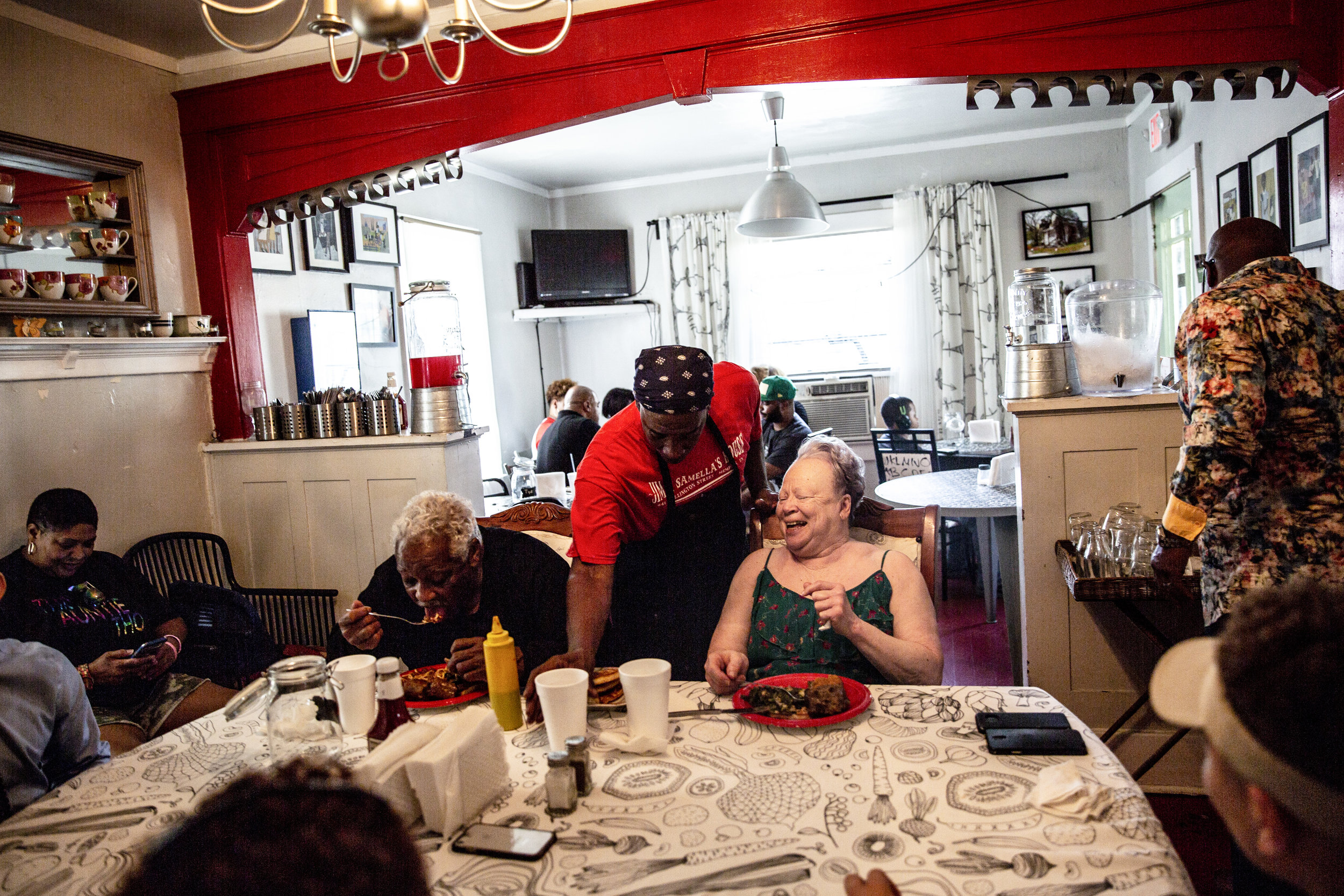 Jim & Samella’s House sits near the intersection of South Memphis and Soulsville, a bustling corner of commerce and history. Not too many Memphis restaurants can boast a front porch and a revolving menu, but owner and head chef Talbert Fleming, 55, knows they are the keys to his success after five years in business. People want a taste of home.

When I pulled up to the whitewashed bungalow beaming on a modest hill, the restaurant looked like a typical house on the street, save for a sidewalk sign with the restaurant’s name. Fleming sat betwixt Rhonda Rucker, program manager of The Works, Inc., and cousin Alice Henderson, owner of Alice’s Hair Salon. Their rapid-fire conversation eased into greetings and a round of six degrees of separation.

“I was just about to cook Rhonda some lunch,” Fleming says. “I got fried tamales.”

His statement feels personal and prescriptive, as if what he has on his stove is just what Rucker needs.

We file in behind him and take a seat at the heavy wooden dining room table at the heart of the restaurant. As I pull back the heavy tufted dining chair, a bit of nostalgia comes to mind of Sunday dinners in the dining room when the fine chinaware was pulled out for special guests like the pastor and first lady, or a close relative who migrated “up North” and came home for a visit. Fleming envelops each of us with a blanket of hospitality, but everyone has to fix their own glass of Kool-Aid. This feels like home. 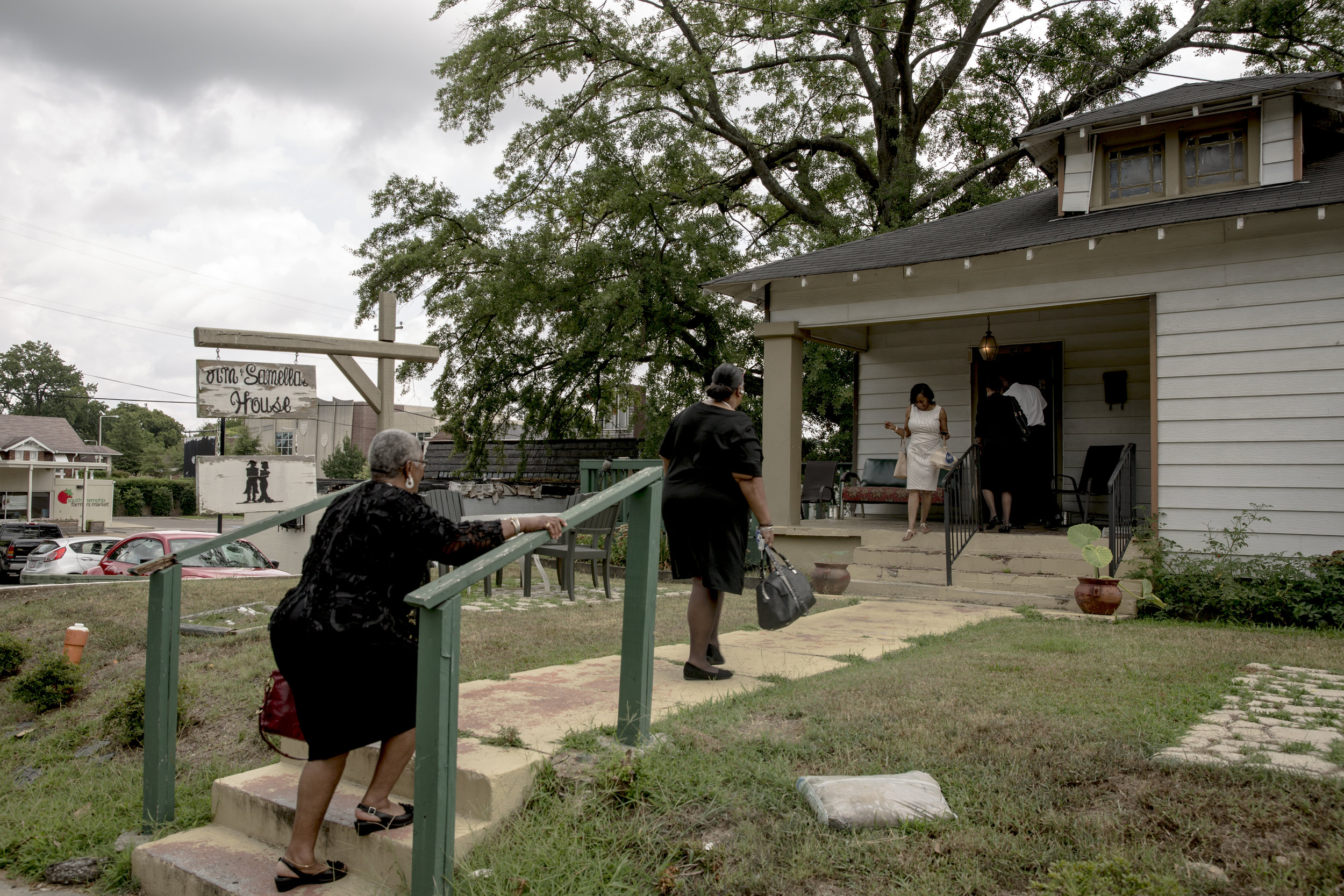 He brings out a plate of fried tamales covered in a mild chili sauce and a decadent cheese bechamel with accoutrements of diced onions, sliced jalapeños and tater tots. After seeing us ogling Rucker’s plate, he lets Alice and me know that he has extra—just what we need. 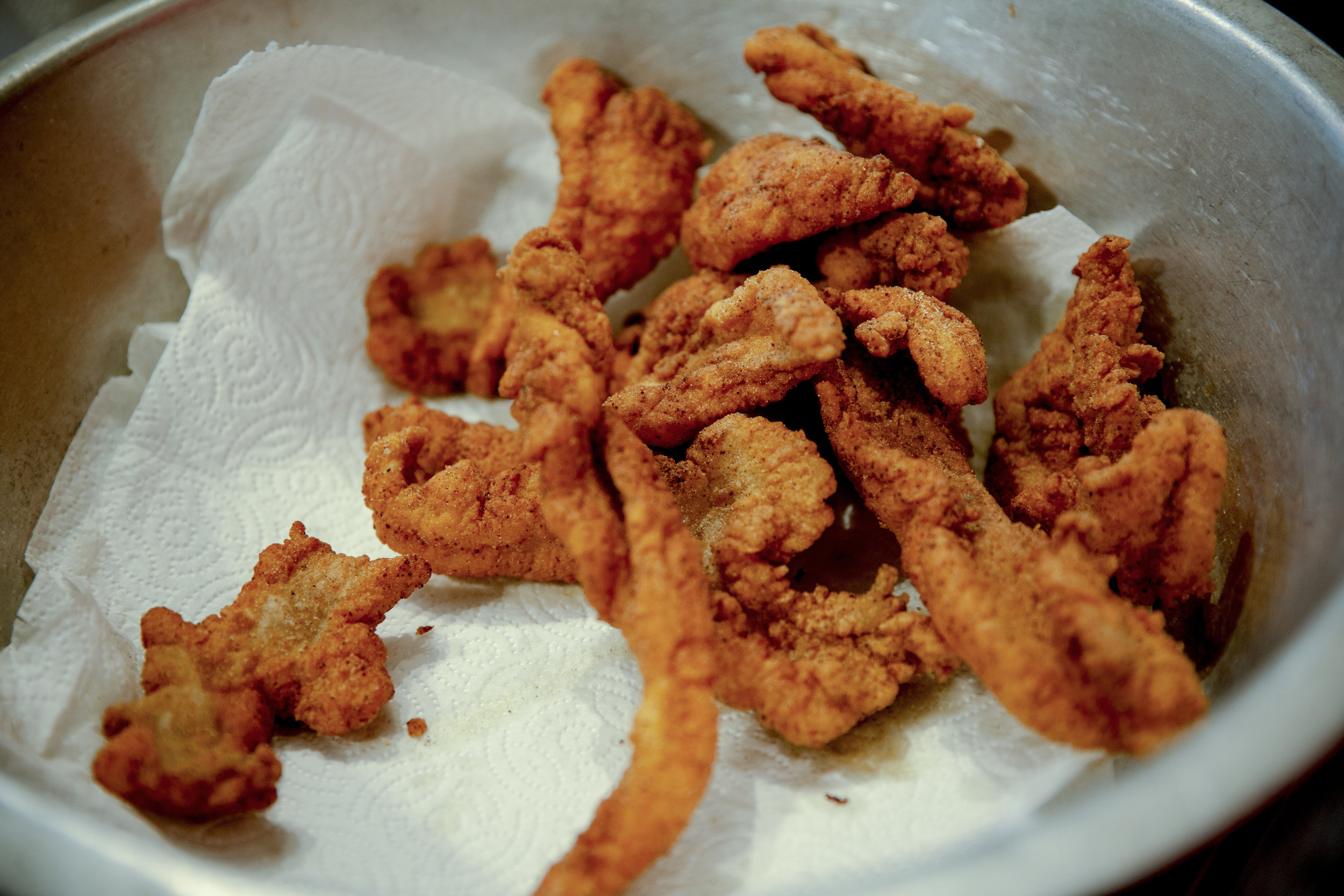 Most of his menu items are made from scratch and give honor to his grandmother, Samella Fleming, the grand matriarch and cook of his family. Born in 1961, Fleming belonged to one of three black families on Bullington Street in South Memphis. His grandmother served as a mother to the street—babysitting children of working parents, feeding and clothing any and all in need. Kids in the neighborhood were treated like extended family according to Fleming.

“We all knew each other. We could borrow sugar, salt and different ingredients from each other. And no kid went hungry on this street,” he said. “We didn’t know we were poor.”

“We were fed. We were clothed. We were bathed. We didn’t know we were poor until we were bussed.”

School desegregation efforts during the 1960s in Memphis was a pivotal point for black families in South Memphis who, like Fleming’s parents (Fronz and Darlene West) and others, fought against bussing their children from their communities to traditionally white schools as far away as Sherwood Middle School or Oakhaven High School, even with schools like Lincoln Middle School or South Side High School less than 10 minutes away.

According to the Benjamin Hooks Institute for Social Change at the University of Memphis, students at LeMoyne Owen College were central to desegregation efforts during this time period through “direct-action campaign boycotting and picketing downtown businesses to protest segregation throughout the city. Their efforts led to gradual citywide desegregation of lunch counters, parks, movie theaters, the local zoo and main library, and other facilities.”

“To be segregated and sent into a population that you are not used to and seeing the things that they do [eat], like fish and chips, and putting vinegar on your fries, you begin to think, ‘This is really good,’” Rucker chimed.

We all laugh at the sentiment, yet the delight of soul food traditions in black communities is steeped in scarcity and tradition dating as far back as slavery. Fleming holds on to these traditions as a mark of honor for how his grandmother kept the family together and the community thriving.

It was an act of love, he says. 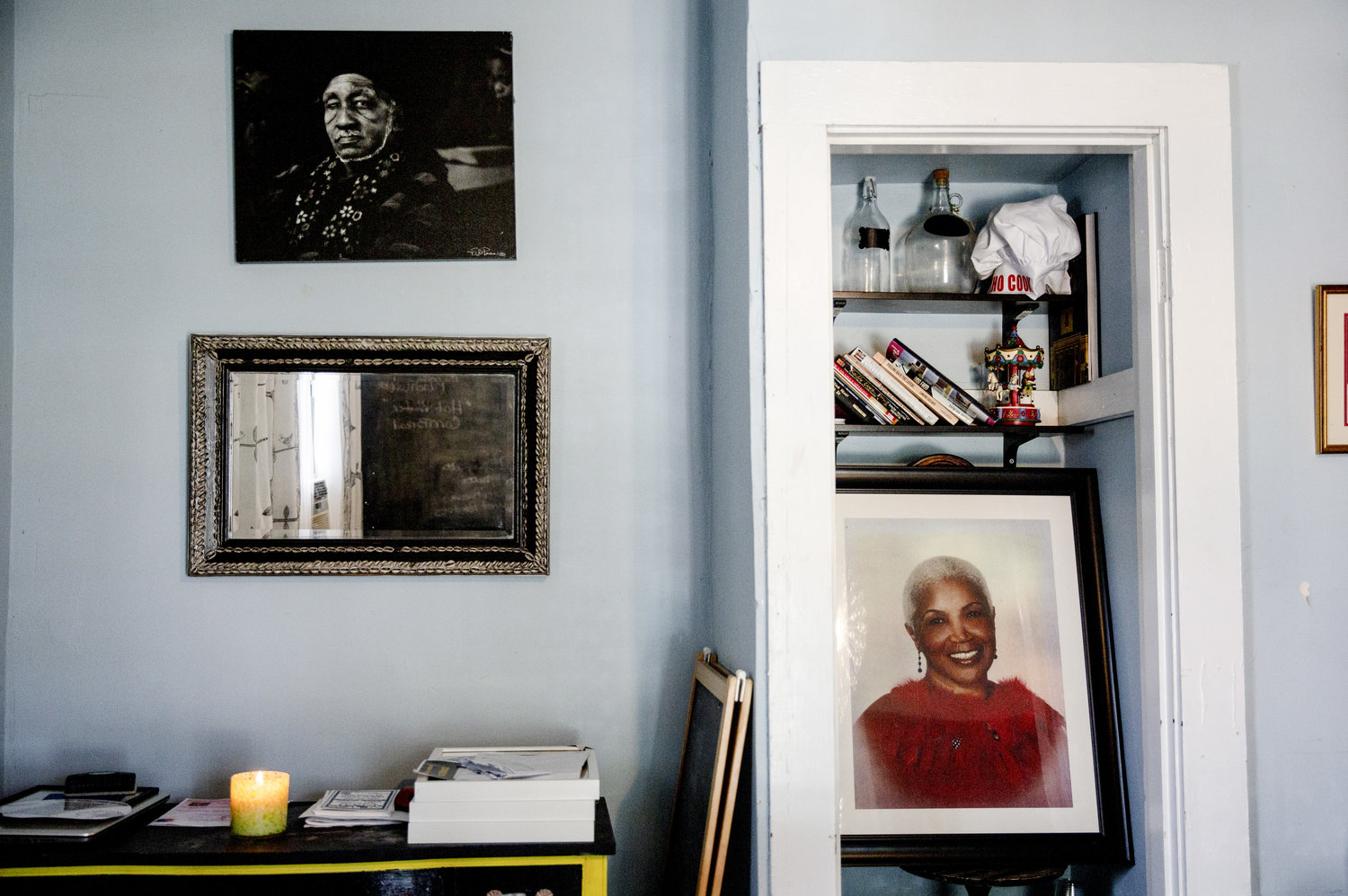 “When my grandmother was alive, everybody would migrate to her house,” Fleming says. “Every Sunday, we’d sit out on the porch or in the house, and we would eat and play. When we come together now, we are so excited to see each other and just have a good time talking about old times. Now this is the meet-up spot.”

The menu at Jim & Samella’s House honors his grandmother’s recipes and changes weekly to fit Fleming’s whims. There are the weekly staples of big-mouth hamburgers and fish plates (catfish, tilapia or buffalo) on Fridays, when you may also find collard green egg rolls with yam juice for dipping, or tamale nachos. Saturdays feature a waffle brunch paired with a choice of fried chicken, fish or pork chops. On Sundays, one can delight in entrees like oxtail dressing with gravy, pig tails, smothered turkey wings or, Fleming’s personal favorite, chicken alfredo.

And the sides? One plate can easily have five. His kitchen churns out pots of greens, fried corn, purple hull peas, green beans, baked yams, macaroni and cheese, steamed cabbage—and do not forget about the hot water cornbread. Dessert is a delicious feast of love with options like chocolate chip bread pudding, pecan pie with a praline crust, or blackberry cobbler—all of which will make you take your shoes off under the table.

When the orders arrive, patrons beam over their heavy stone plates, perhaps reminiscing about years gone by when people “used to cook like this, when people lived off the land.”

That way of cooking and living has been replaced with “the latest diet or processed food or microwave dinner,” Fleming says.

“When people come to me and ask me to change my menu to make it more healthy, my question to them is how my grandmother lived for a long time cooking this type of food.”

“I haven’t had a problem with my pig tails, but we didn’t eat food like this everyday. We couldn’t afford to.”

As a small family business, Fleming is joined in the kitchen with his brother Sheldon, who is the master fryer, and childhood friend and “play brother” Michael Cannon, who has mastered the art of hot water cornbread.

Together, they are the true meaning of comfort food in human form.

None of them is above bringing out food orders. Fleming usually works the room, chatting it up with old friends, a host of cousins and new visitors who either heard about the restaurant from a friend or got tagged on one of his Facebook posts announcing the day’s menu. Often, his mother Darlene sits in the middle of the daily fray greeting and talking to guests. Entering as strangers, guests often crowd at the heavy wooden table and talk to people they have never met and leave feeling as if they had known each other for years. It is a spirit that Fleming embodies and emanates into the Jim & Samella’s House experience.

“I like socializing with people. I love having good conversations,” he says. “I can go out and just sit down and have a nice conversation over food and it can take all day. I thank God for allowing me to be in a place that I can to do that.”

Melonee Gaines is the owner and lead maven of MPact Media Group, a digital media and public relations consulting firm. She is an oxtail enthusiast and cures her insatiable wanderlust with frequent road trips inspired by her growing restaurant lists in her Foursquare City Guide. Follow her food exploits on IG @meloneedg.