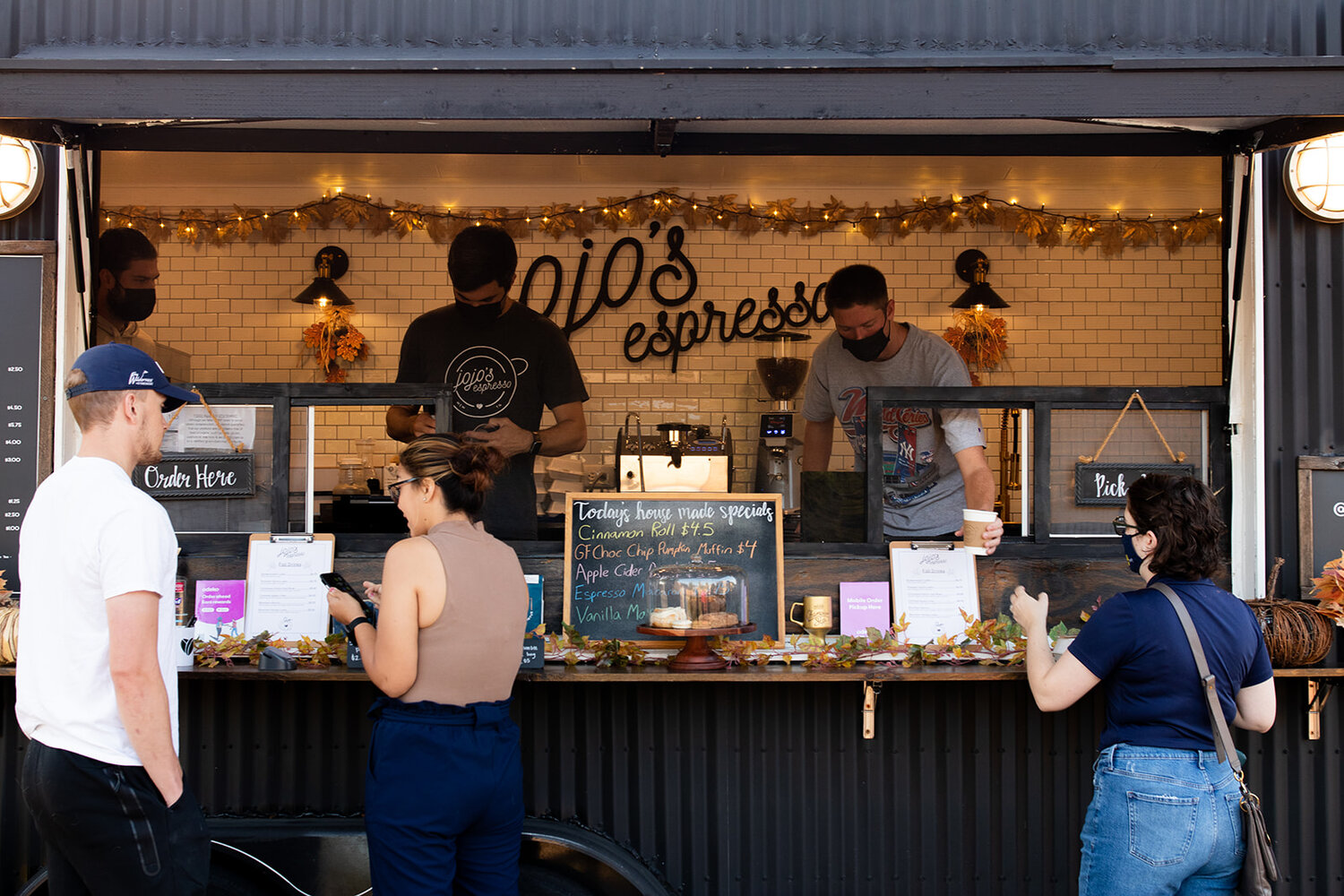 [Editor’s note: Jojo’s Espresso’s Iced Toasted Almond Coconut Latte was the winner of our first ever ChampionSip Iced Coffee competition. We enjoyed getting to know owner Taylor Whiddon better and learn more about his business, and we hope you do, too!]

Jojo’s Espresso is a craft coffee shop on wheels. The truck is custom designed by owner Taylor Whiddon, and once the awning comes up, you feel as though you are in a cafe. Jojo’s operates roughly three mornings a week, typically in Germantown, but it’s been known to pop up in some East Memphis neighborhoods on weekends.

Taylor’s full-time job is at Life Church of Memphis as stage designer, though he’s also been managing the church’s coffee shop since April.

Speaking of the church’s coffee shop, it opened in 2017 and could be the reason Jojo’s exists today. Whenever Taylor would walk by, he would think to himself, “That looks fun. I want to be a barista.”

While Taylor was daydreaming, his wife, Hannah, was pregnant with their second son, Josiah. He was born on November 7, 2018. Four months before that, they learned that he had a heart defect—hypoplastic left heart syndrome. Although there was a 98 percent survival rate and a strong chance for a good quality of life, he never left Le Bonheur Children’s Hospital.

“His lungs were in bad shape from the heart condition. The doctor said if he got an infection of any kind, he wouldn’t make it,” Taylor says. “The surgeries were successful, but Jojo couldn’t shake the infection. We lost him on December 27.”

The couple spent most of 2019 recovering from their incredible loss. “Toward the end of the year, I had this wild idea,” says Taylor.

“I sold an old truck, TV, and laptop and bought a very high-end home espresso machine to play around with.”

He bought a Rocket Appartamento.

“I didn’t want to cheap out. I wanted to pull shots and do weight calculations and time it properly,” he says.

Once he had the right machine, he, of course, surfed videos on YouTube. He learned tamping, weight calculations, brewing, correct grind settings, and so on. “I spent hours and days watching video after video until it all just came together,” he says.

And, yes, he taught himself latte art too. “That part took a few months to get down. Getting the right texture, learning to steam correctly—and temperature correctly—took a lot of trial and error. I would go through pounds and pounds of cheap Seattle’s Best coffee to learn. I couldn’t waste good coffee!” he says. “Once I found that perfect shot, I could do recipes from Vice & Virtue.”

And then he went to Hannah and said, “What if we make this a business?”

By this time they had just sold their house and paid off some debt, and had some money leftover. His ideas continued: “What if we invest in a coffee trailer and sell homemade pastries and see where it goes?”

They formed an LLC in February 2020, bought a flatbed trailer, and had a friend build it out to Taylor’s specifications over a six-week period. Taylor and Hannah did all of the inside—painting, plumbing, countertops, machines. “It was stressful, but fun,” Taylor reports.

Then came March 2020—but Taylor hasn’t seen the pandemic as a stumbling block. “Covid hit us hard, but we weren’t too concerned since everyone was staying open for takeout,” he remembers.

They opened on July 10 at an apartment complex in Germantown with a full menu of Vice & Virtue coffee drinks, along with pastries made by a mother and daughter duo Taylor works with at Life Church. They’ve been rolling at least three days a week ever since.

Why Germantown? In the beginning, Taylor had his eye on a couple of spots out East—where there wasn’t already an easy place to grab a good coffee. He considered an office complex at Germantown Road and Walnut Grove and the Residences at Thornwood near Germantown Performing Arts Center. Covid really affected traffic in and out of the office complex, so Taylor decided to build his customer base at Thornwood.

“I always loved Thornwood. It just needed a coffee place,” says Taylor. Much to his surprise, both resident managers quickly said yes to his proposal for three days a week.

Lately, he’s been getting calls from customers in East Memphis and Germantown who want the truck at their houses on Saturdays. “Our focus now is to be where people can stop by on the way to work Monday to Friday, and on Saturdays go into neighborhoods and cater to the residents but also be open to the public,” explains Taylor.

Jojo’s Espresso has three employees in addition to Taylor. Hannah focuses on their two young sons (five years old and eight months), but she still helps out when she can. She makes the syrups for the seasonal drinks and handles the payroll, books, and taxes.

It’s important to Taylor that Jojo’s comes off as a craft coffee shop. “Drinks are made to order. It’s going to take time,” he explains.

“If there’s no line, it’s still two minutes. It’s like walking into a legit coffee shop.” 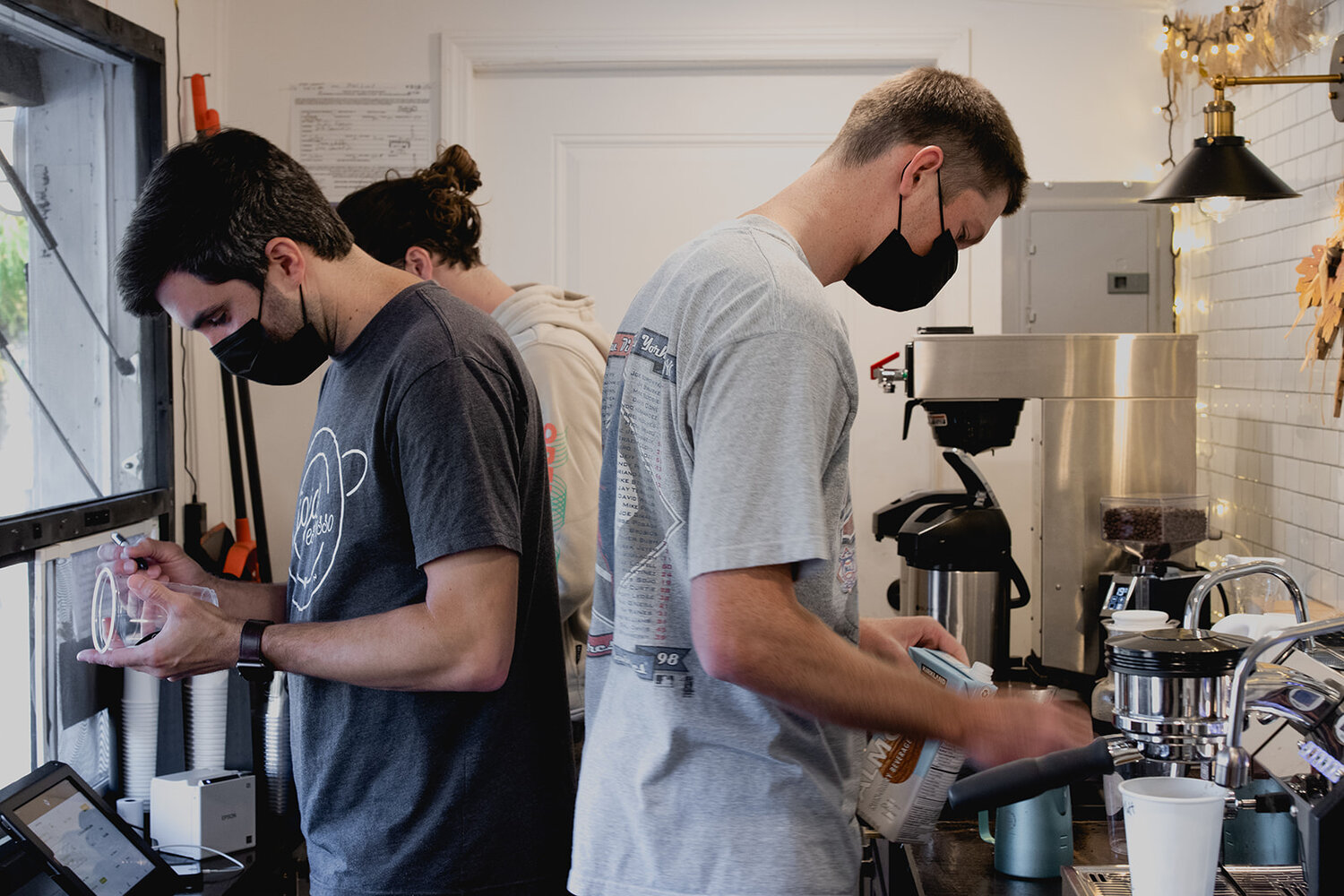 The focus is on the coffee. Vice & Virtue is the house bean, roasted locally by Tim and Teri Perkins, who were friends of Taylor before he realized his barista dream. “It’s great coffee, and they’re great people,” he says.

Jojo’s doesn’t offer frozen coffee drinks or smoothies. “While we welcome the people who put in more cream than coffee, more syrup than the average person, we’re really catering to those who have a deep love of coffee and want to know the region and zone,” Taylor says.

After a year in business, Taylor says he would do a few things differently if he were to do it all again. He says he would staff up before opening. “Have people ready to go, hired up, trained up. Don’t rely on your pregnant spouse,” he advises with a smile.

He says you should have your finances in good order too: “It’s important to have a safety net, enough to buy a new machine, new generator, and backup electrical equipment.”

As far as the truck’s layout goes, he admits it can be jam-packed with three people. “I could have repositioned a little differently, but at the end of the day, I wouldn’t trade this trailer in for another. I would buy a second one,” he says.

Is expansion in the works? Taylor is toying with the storefront idea. “It got kind of serious a few months ago, but I decided it wasn’t the right time,” he says.

“Let’s see what the next couple of years are like. No need to rush. We’re content with where we are now.”

Jonathan Amado is a Memphis-based photographer and local barista. Although a California native, he loves Memphis and utilizes his talents to cultivate community and support local business. @jonathanamado_