Dishwashers keep restaurants at the top of their game 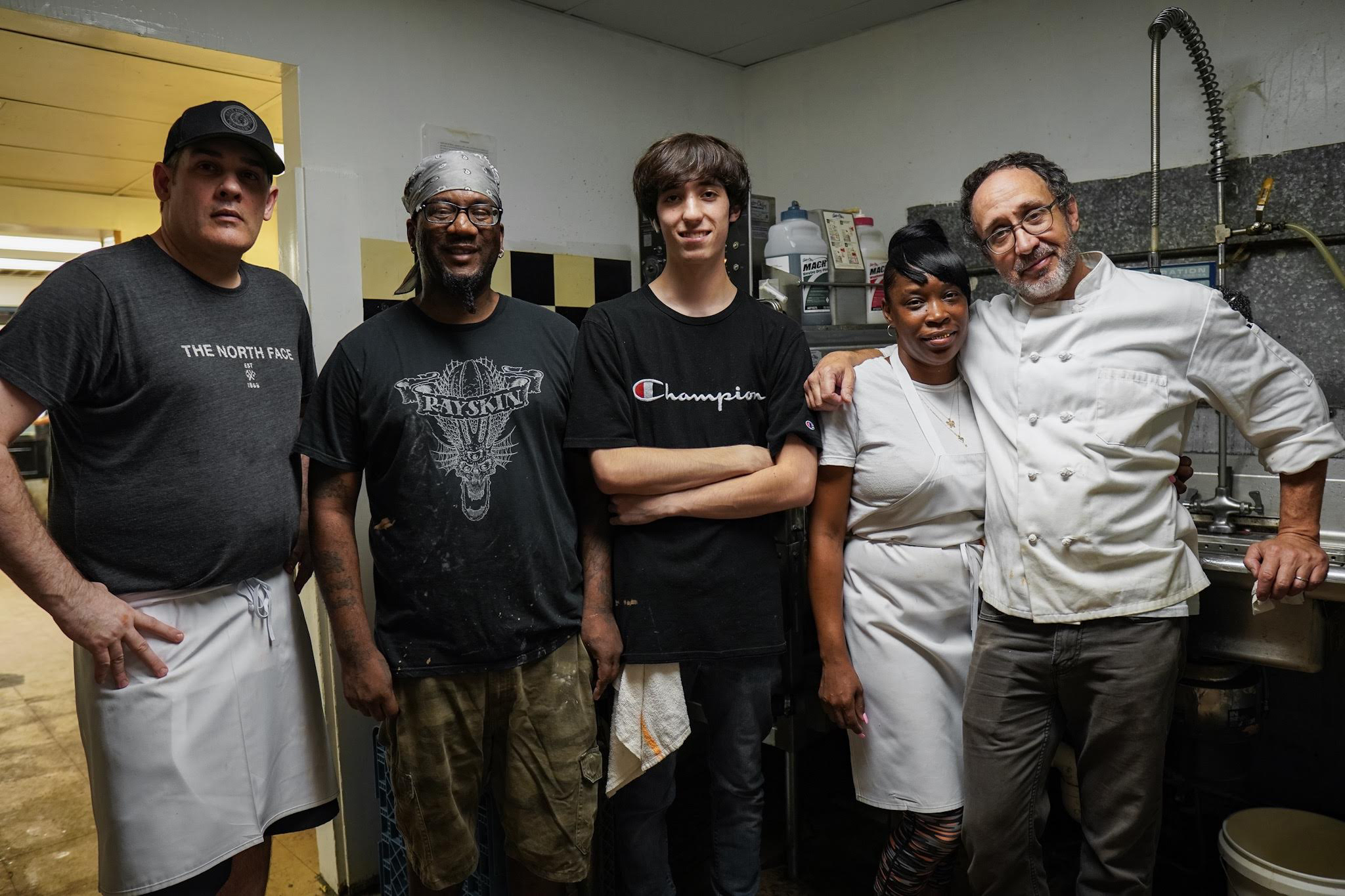 Restaurant Iris and Second Line, which share a kitchen, may have four cooks working on a busy night.

Say, for example, they have 100 customers one evening, and each customer orders an average of three courses. That comes out to 300 plates, plus glasses, silverware and every pot and pan used to cook the food they order. 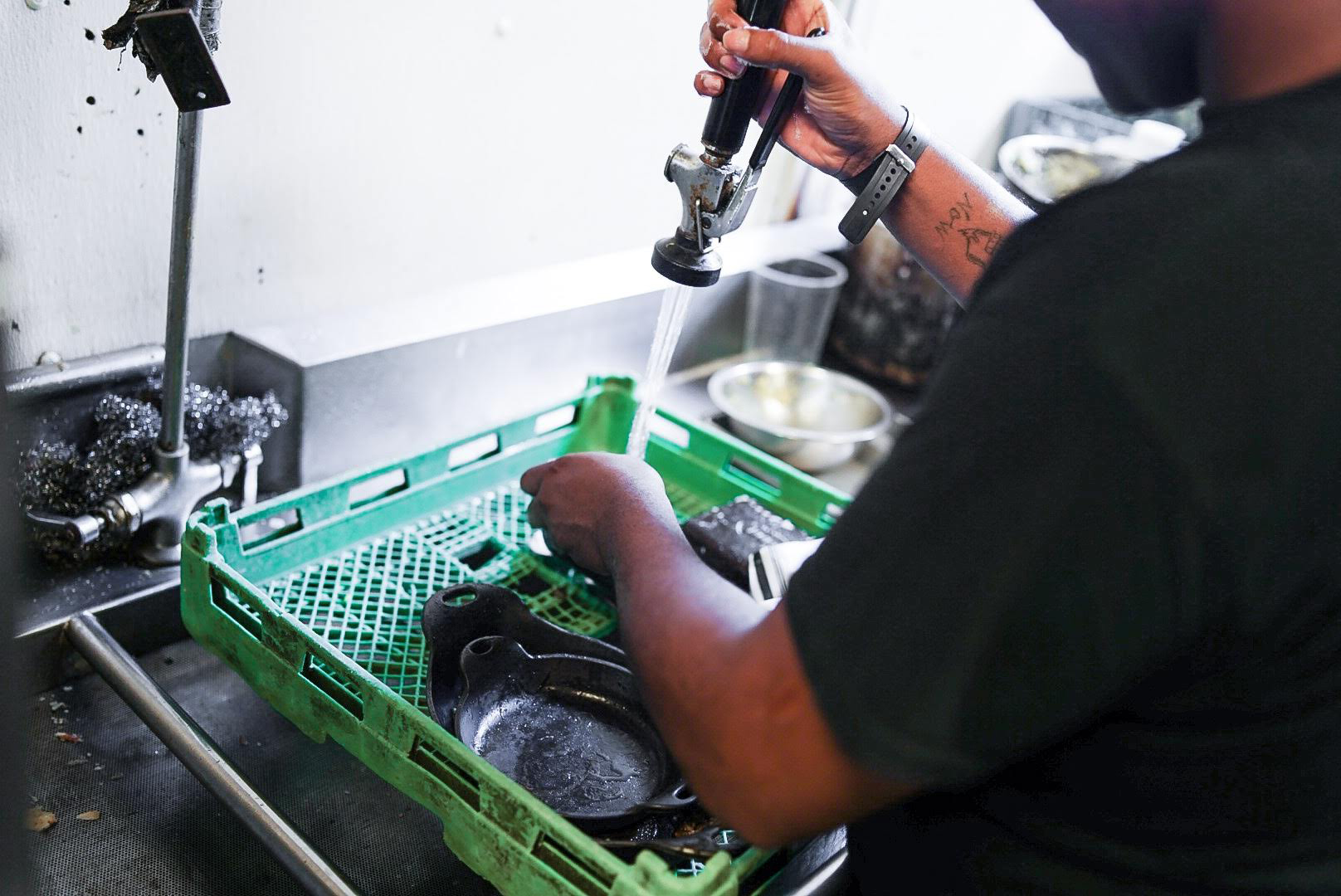 All of those dishes have to be cleaned by just one or two people, depending on the night. Washing dishes is a tough job, one that Iris/Second Line Chef Kelly English says doesn’t get enough credit.

“There are a lot of people who get credit in restaurants for making great things happen, but none of that can happen without the dishwasher,” English says. 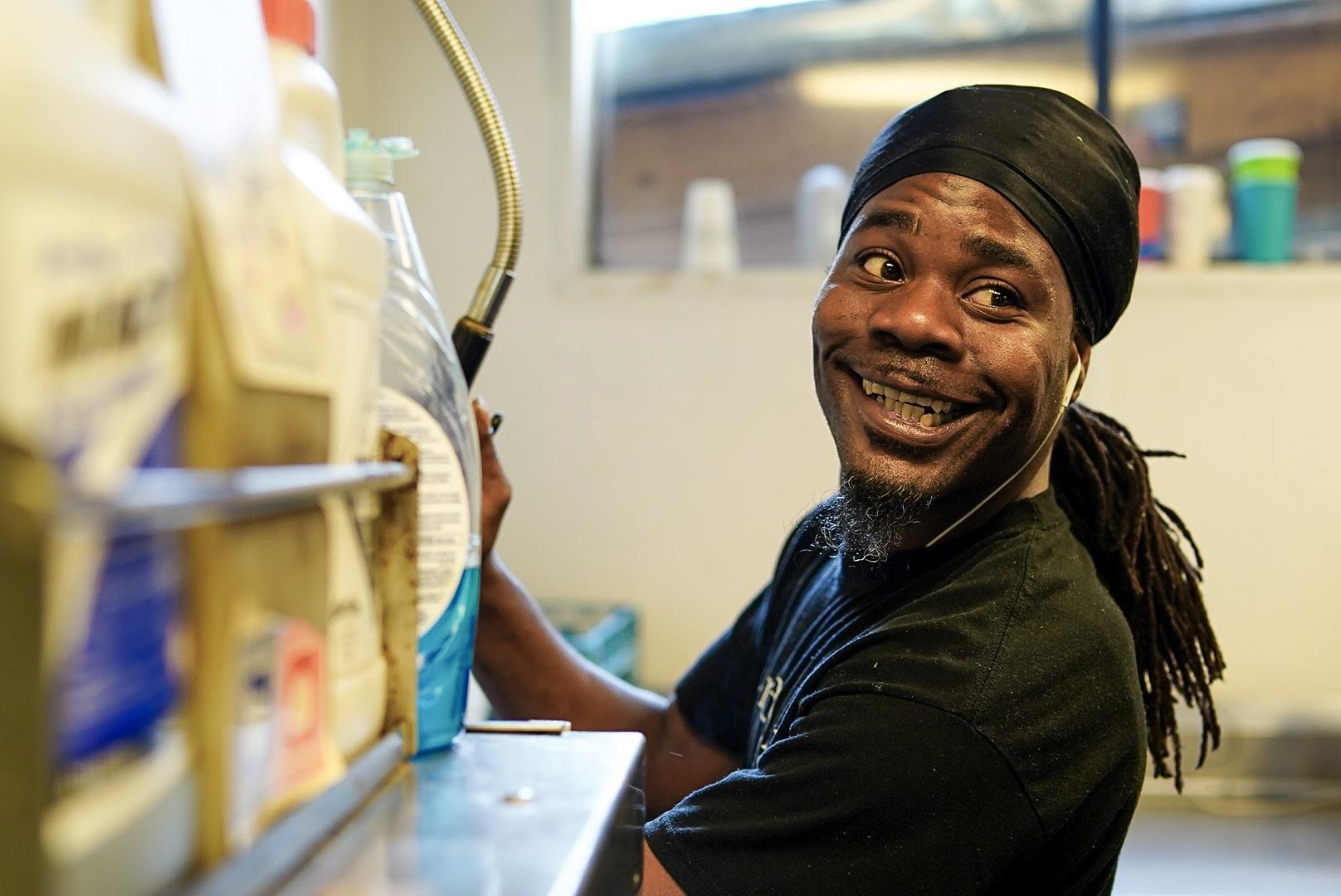 “In the early days of Iris, when we were still in opening cost mode, I’d ask my sous-chefs if they wanted to cut the cook or the dishwasher. Never ever did they say, ‘I want to keep the cook.’ It was always the dishwasher.”

Chef Russell Casey at Bounty on Broad agrees: “You can’t run a restaurant without a dishwasher. It’s a position that often gets overlooked. But if that person doesn’t show up, you realize how much for granted you take that position. I’m super happy to have the two guys I have. They always show up, and they’re reliable.”

One of those guys is Damien Curry, who has worked as a dishwasher for Casey off and on for almost 15 years.

The two met when they both were working at the now-closed Inn at Hunt Phelan.

“The man doesn’t miss a beat. Rain or shine, he’s going to ride his bike, ride the bus here or walk here. He never complains. I love him to death,” Casey says. 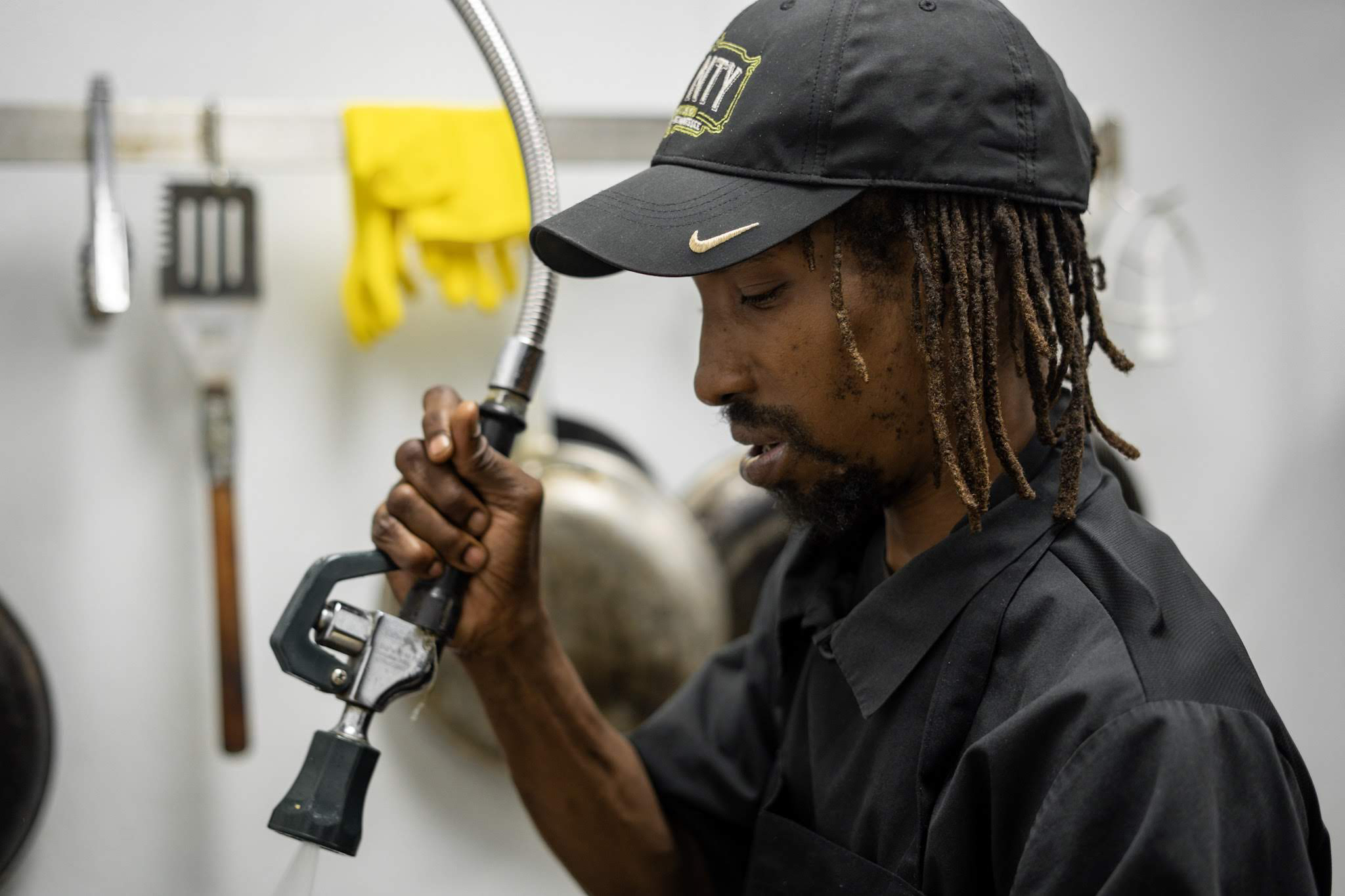 Curry says he and Casey lost touch after Casey briefly moved to New Orleans to pursue his culinary career. But one day, a couple of years ago, he was walking his dog down Cleveland when Casey happened to drive by. The two talked and Casey offered Curry a job at Bounty. Curry had been looking for work, and after several interviews with no callbacks, he was giving up hope, but “something told me not to give up, to keep going,” Curry says.

Curry understands the importance of his role in the kitchen. He likes to think of dishwashing like a game of football, and the dishwasher is the quarterback. 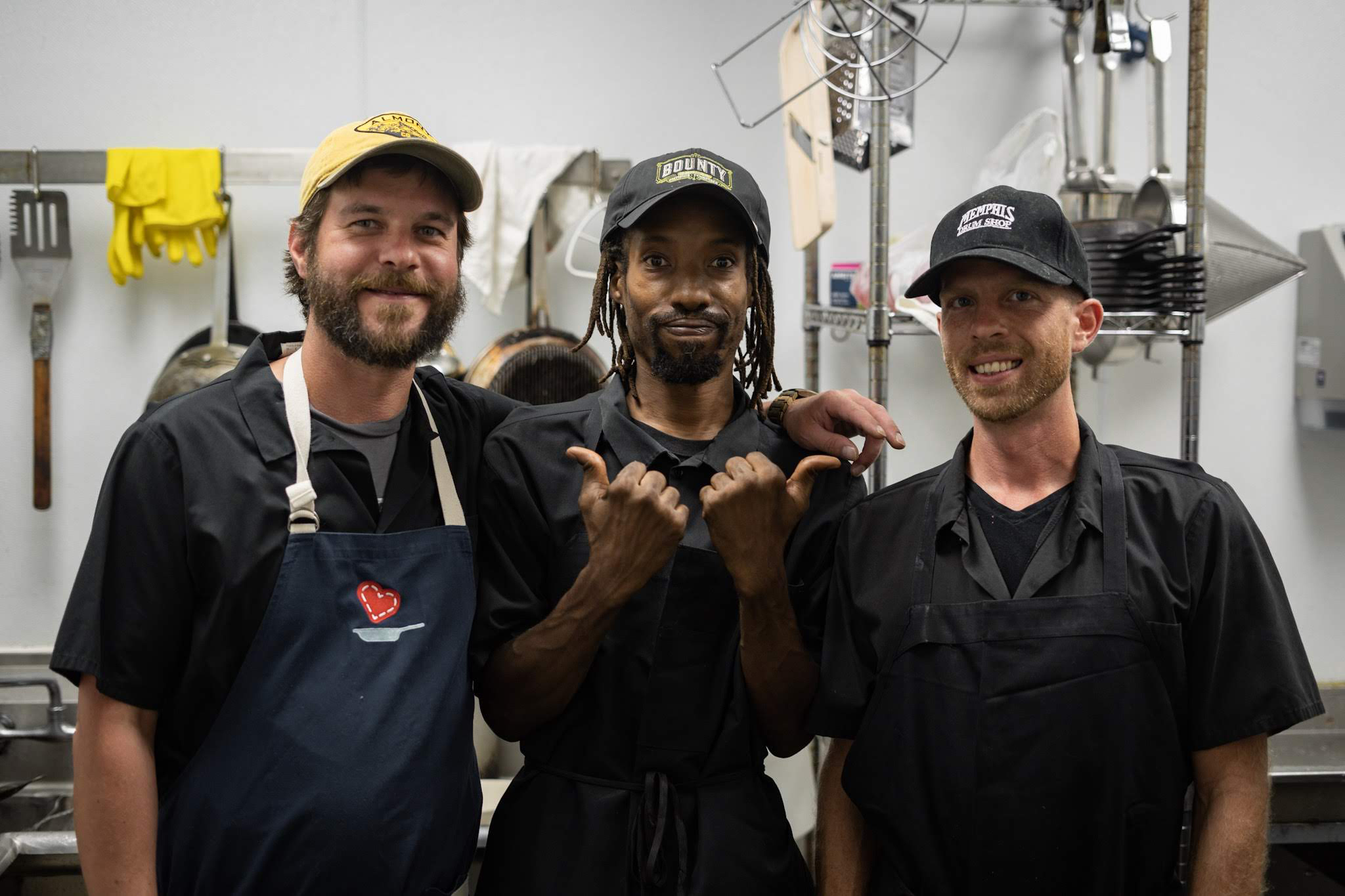 Curry says he also cleans the bathrooms, the fridge and the area outside the restaurant. “Any time anybody needs help, I’m there,” he says. 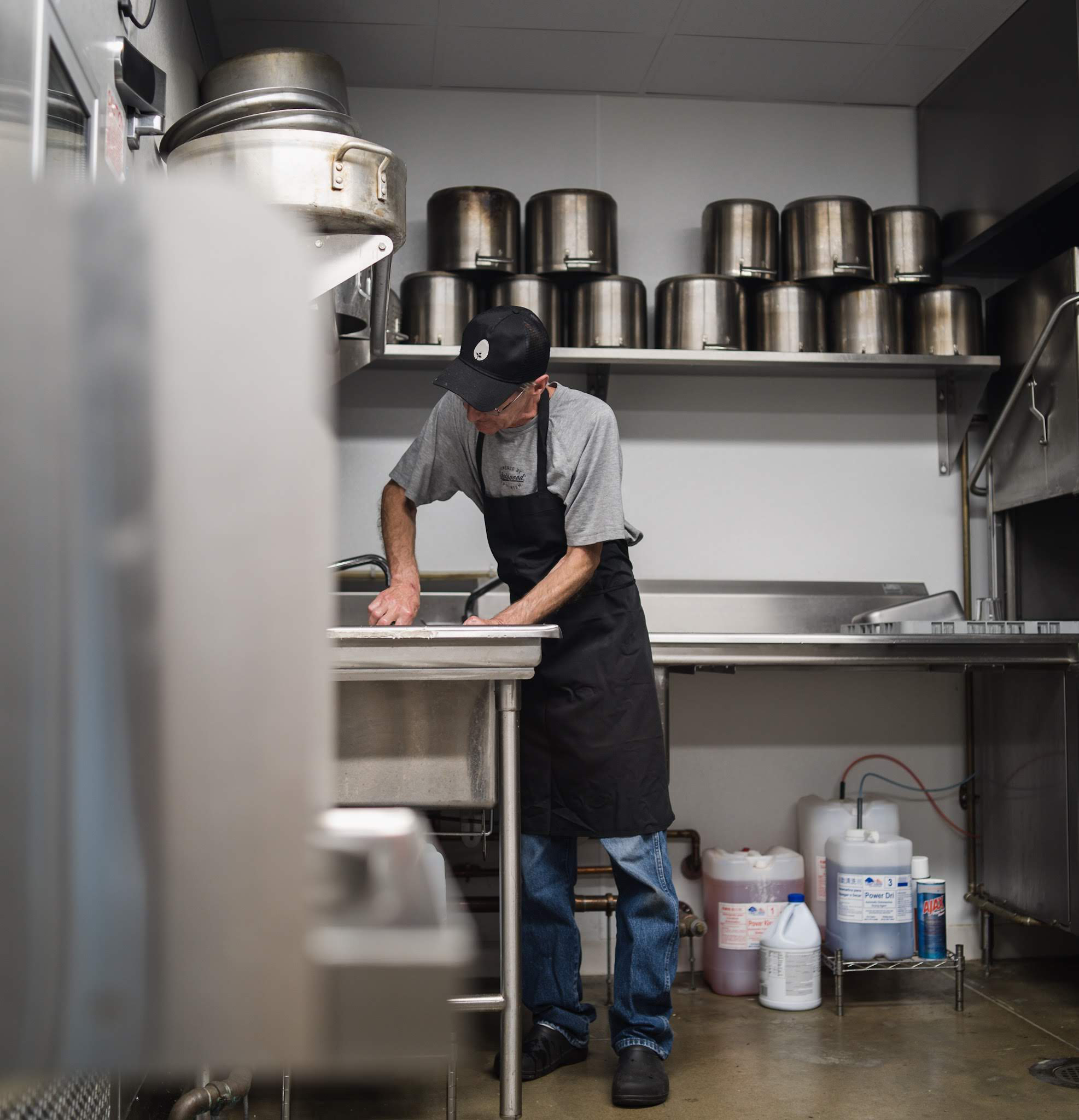 Most restaurants require the dishwasher to do much more than simply cleaning the dishes.

“On a busy night, when the dishwasher doesn’t show up, you don’t have pans to cook in. Worst case scenario, everybody pitches in and does a load here and there,” says Crosstown Arts Chef Raymond Jackson.

“But more than the dishes, a lot of people don’t realize that the dishwashers are the people who keep your place clean.” 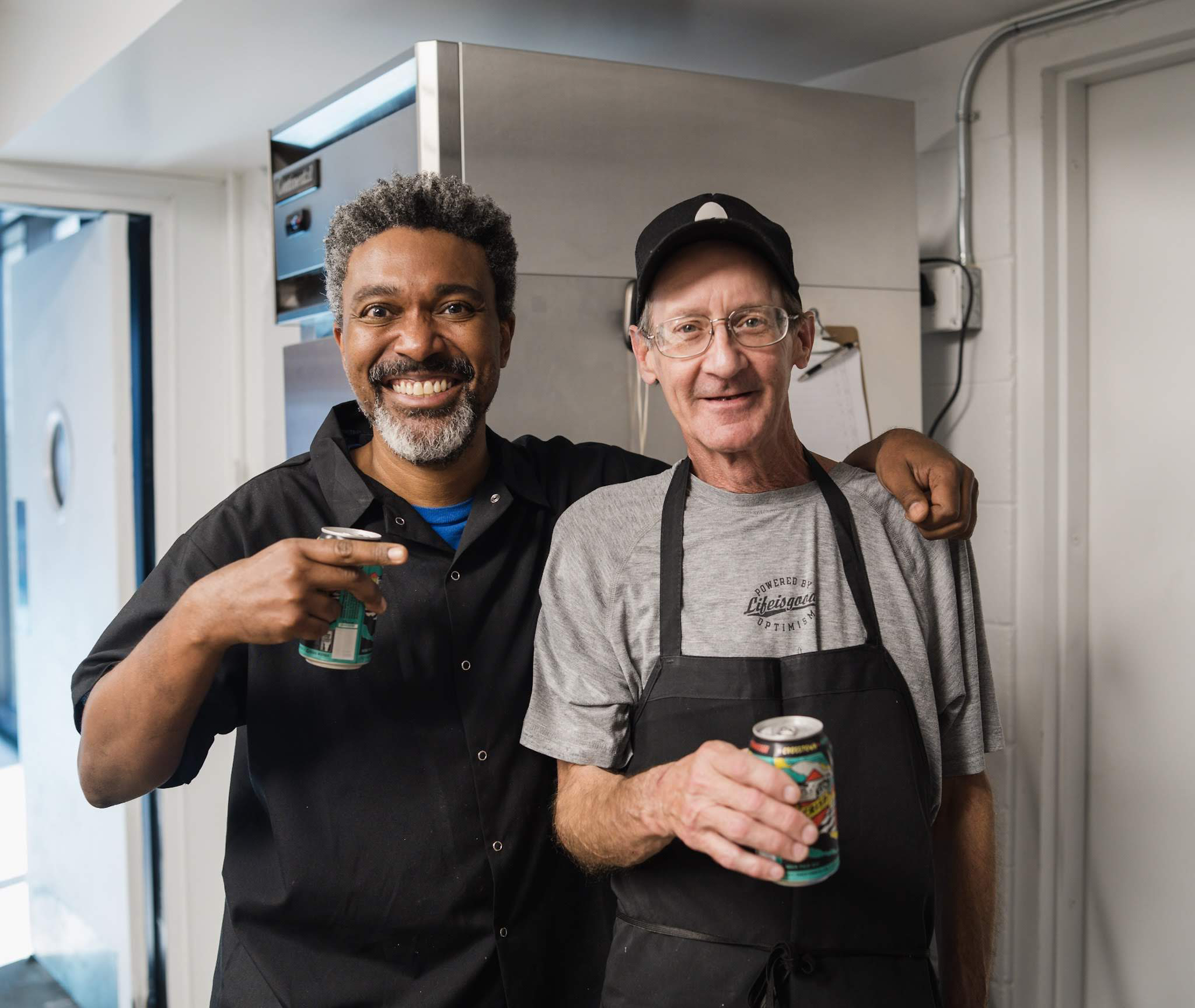 At the café at Crosstown Arts—which serves coffee and pastries to the public, along with three meals a day to resident artists—dishwasher Mark Nixon is also responsible for changing the fryer oil, cleaning the fryer and cleaning the vents, among other duties.

Nixon has washed dishes all over town, including Slider Inn, Trolley Stop Market and Lost Pizza Co., and he says each job required different additional duties.

“I’ve been a backup line cook, backup pizza maker,” Nixon says. “I was a line cook and a dishwasher at Lost Pizza. The boss wanted us to be able to work every spot in the kitchen; some nights I worked in three spots.” 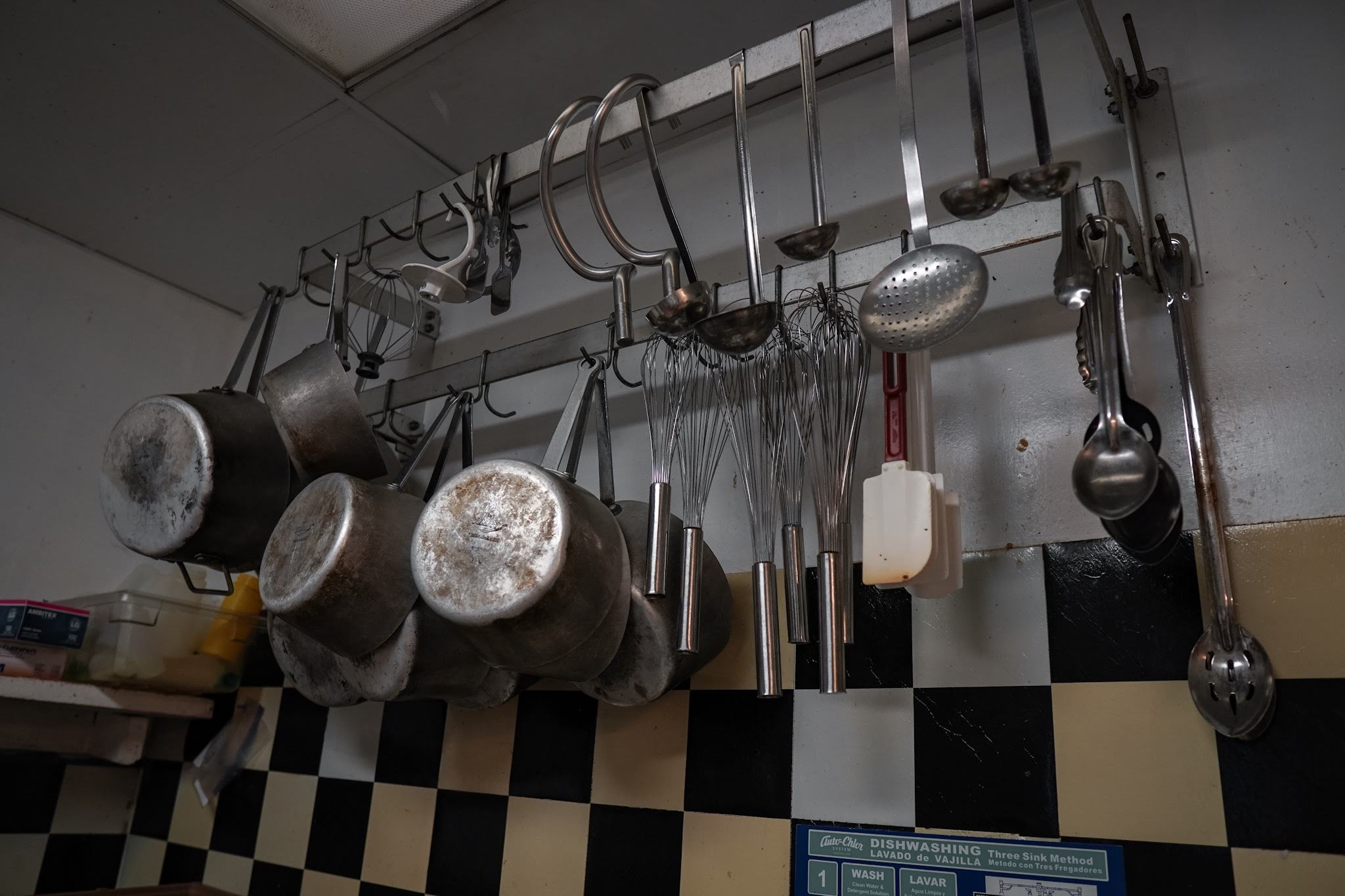 “There’s no other job in the world that better prepares you for life than being a dishwasher,” Smith says. 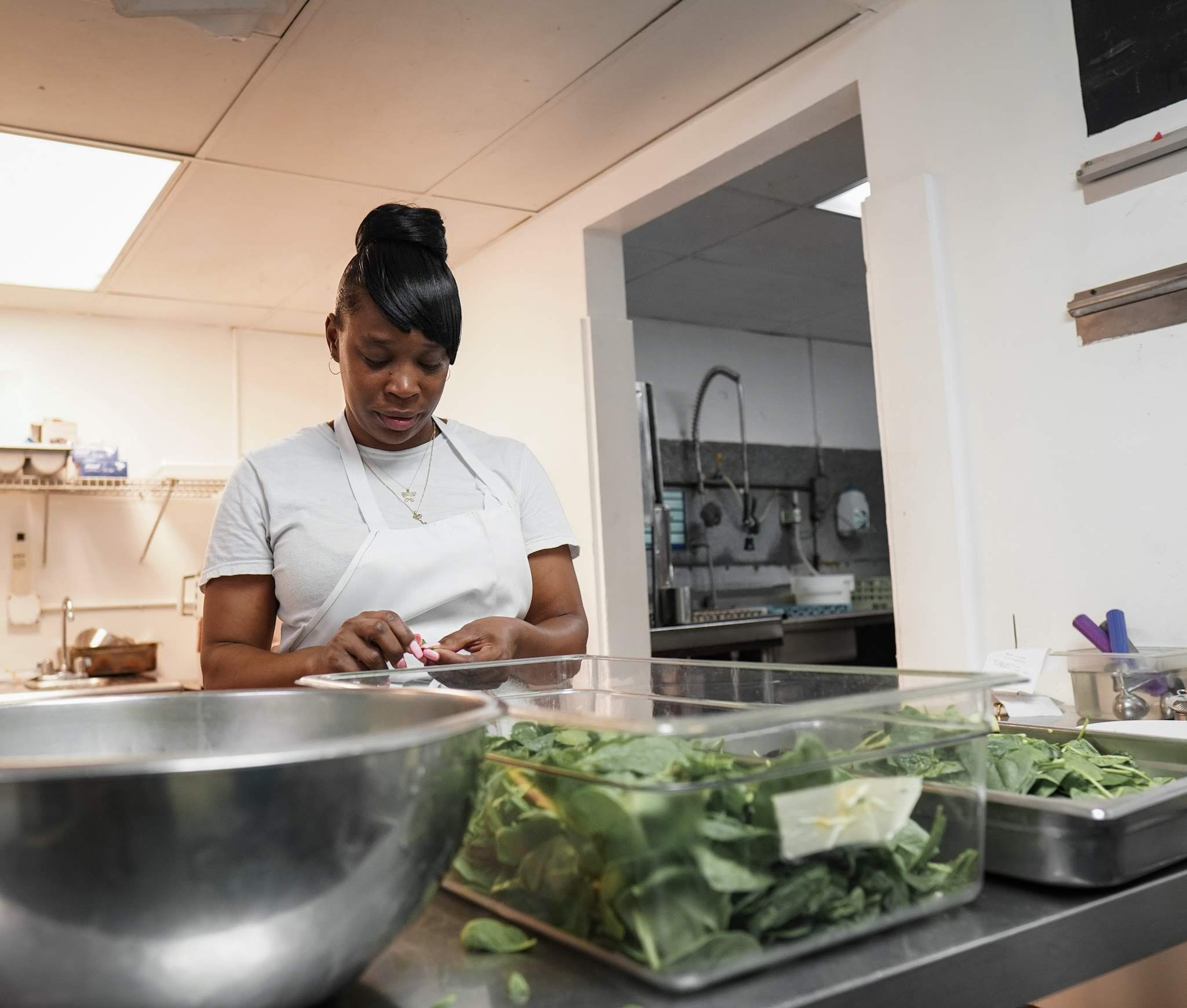 Tsunami dishwasher Tiffany Vann has worked all sorts of jobs (janitorial, hotel work, pawn shops), but this is her first dishwashing job and Smith says she’s “awesome.” Besides washing dishes, she’s also expected to do some light prep work (like peeling potatoes) and cleaning tasks, like taking out the garbage and cleaning the bathrooms. 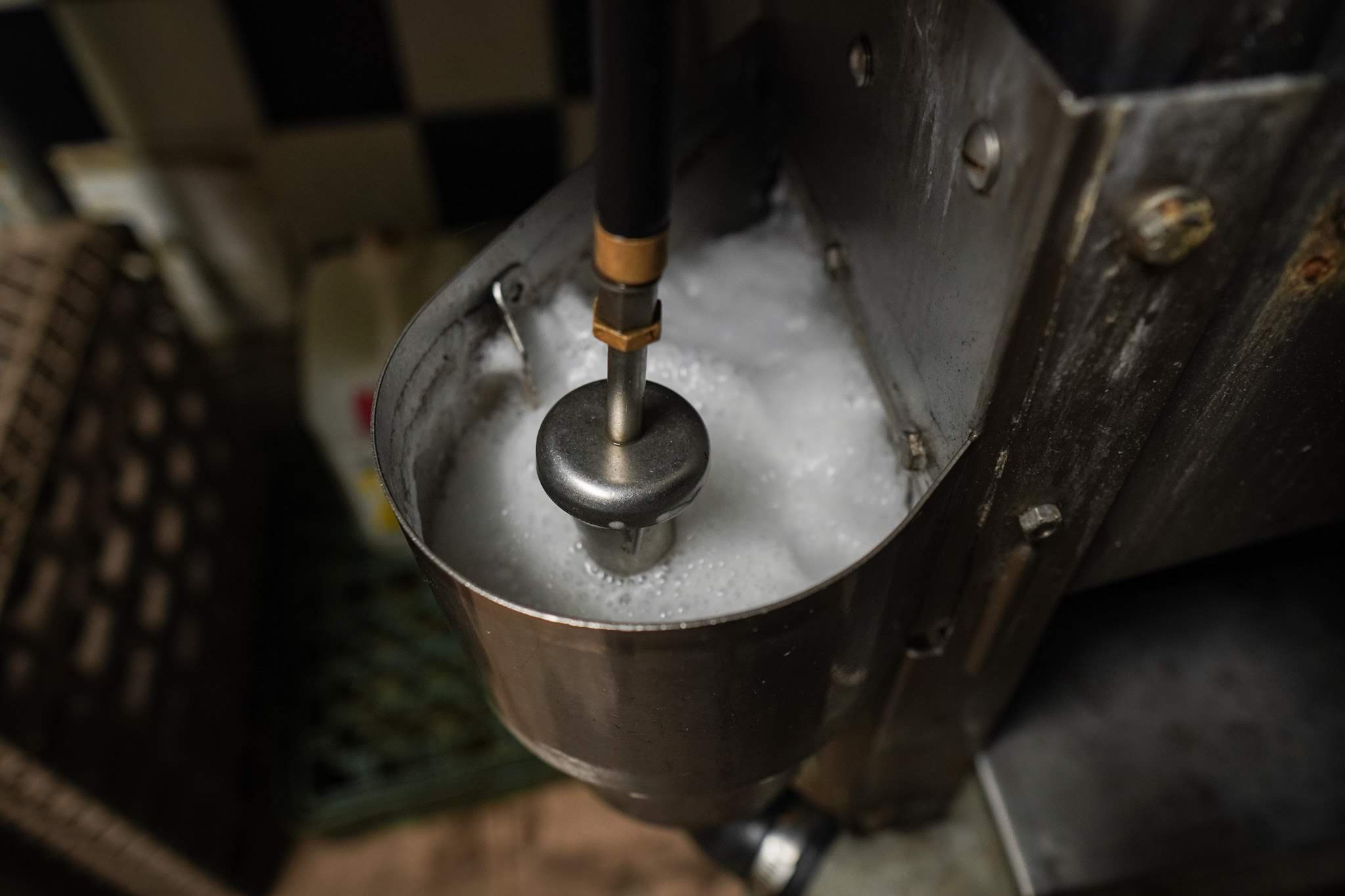 Though Smith says dishwashing can be incredibly stressful on a busy night at Tsunami, Vann modestly says, “I wouldn’t say it’s stressful, but there are times when it can get overwhelming.”

For many dishwashers, the position is a foot in the door to other kitchen roles. Smith recently promoted a longtime dishwasher into a prep-cook position. In fact, Smith says “just about everybody” in his kitchen got their start washing dishes somewhere. 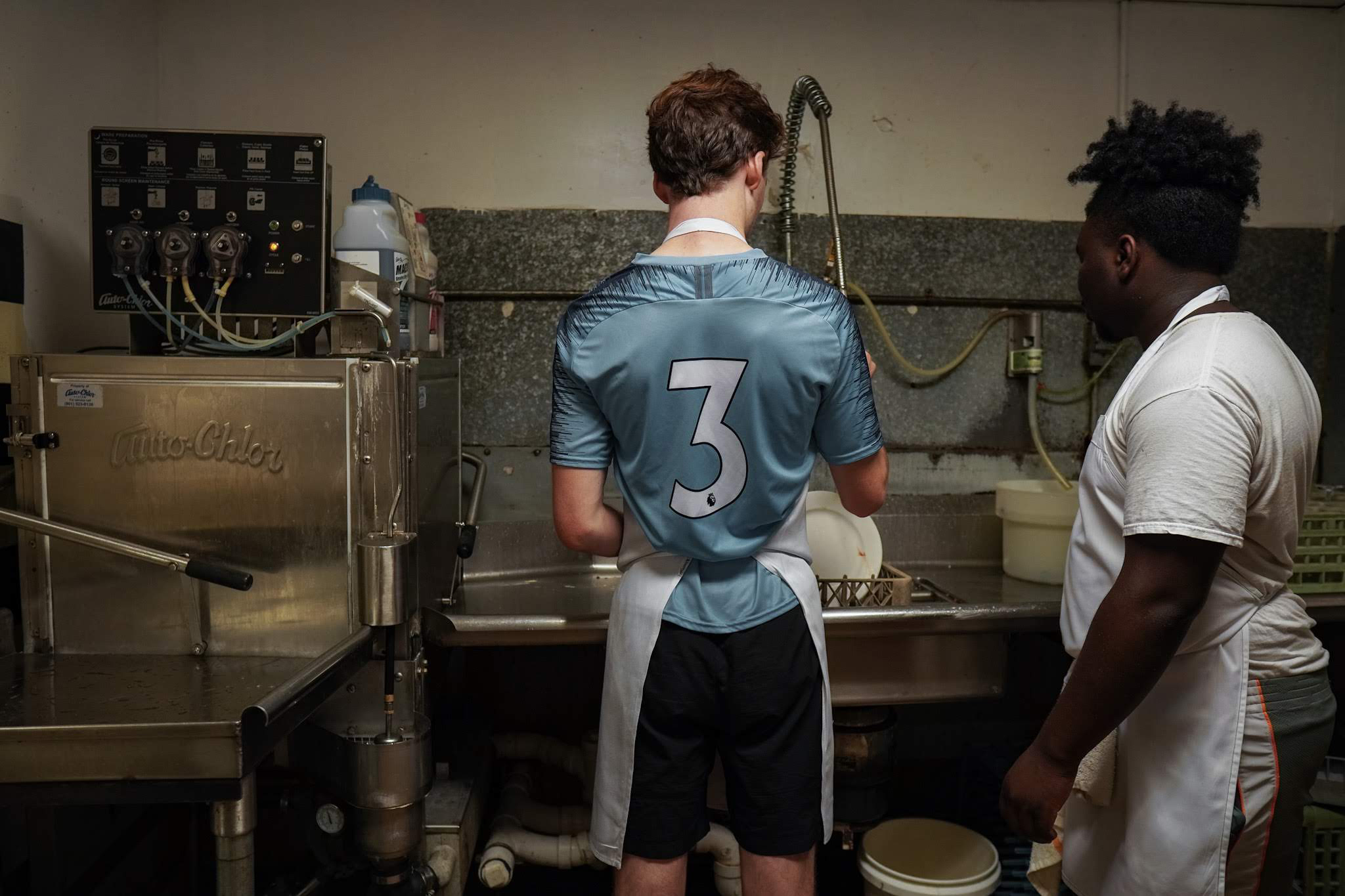 “I don’t demand that. If someone comes in on a higher entry-level job, that’s fine. But it’s always a plus if they have washed dishes somewhere else,” Smith says. “Some people get out of culinary school and want to go straight to being a chef. I would never hire anyone like that, and I think it’s unfair to them. You miss out on so much by not working your way up from rock bottom.”

Even Smith got his start washing dishes: “I cleaned a lot of plates in Memphis, as Tina Turner likes to say.” 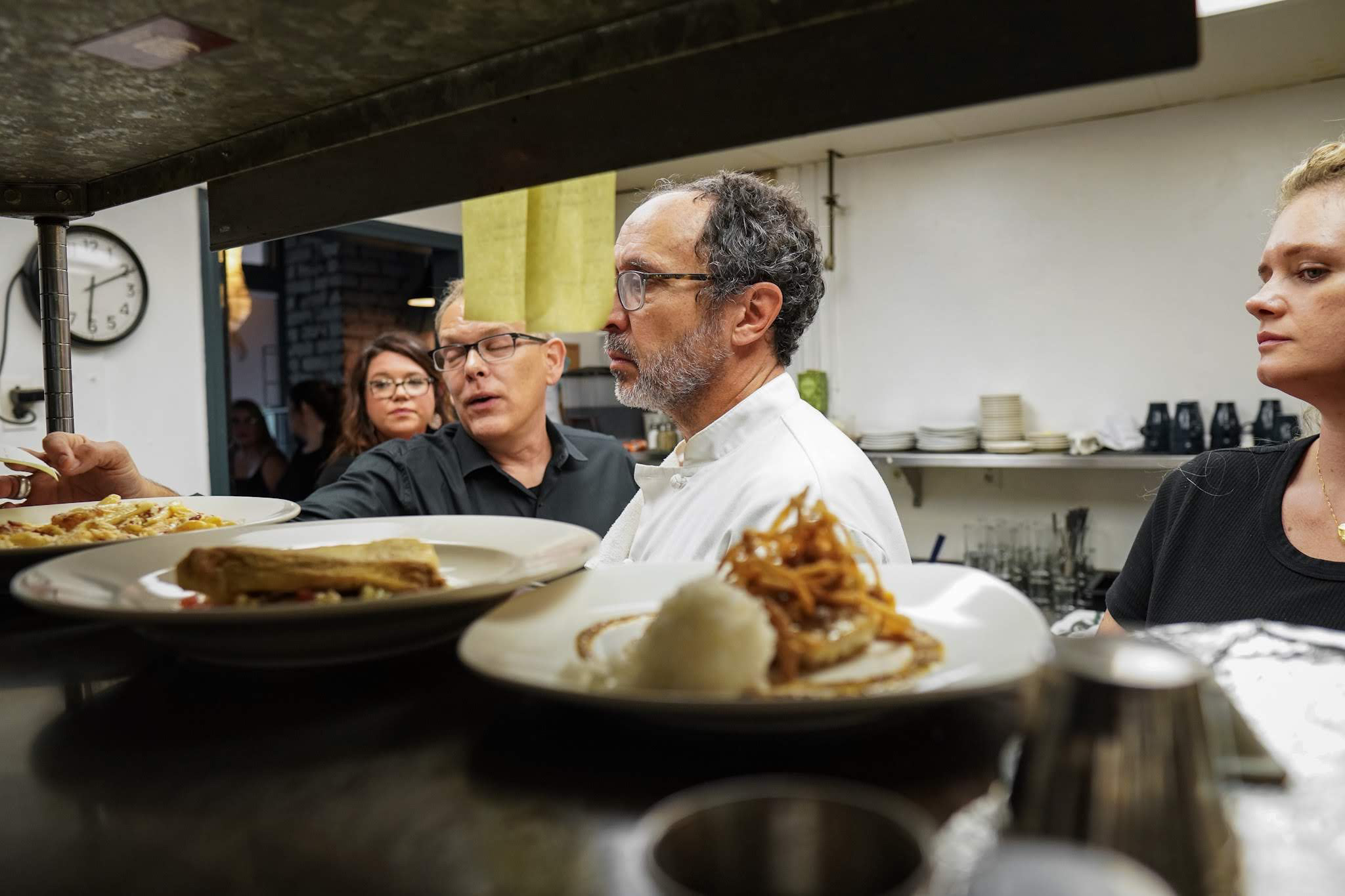 There are two types of dishwashers, according to Smith: those who are temporary and just working the job to pay the bills and those who aspire to move up in the kitchen. Smith’s lead chef of 18 years was the latter, as was his former sous-chef of 17 years.

Cortez Groves at Restaurant Iris and Second Line is also the aspirational type. After just months of washing dishes at English’s restaurants, Groves was asked to jump on the line and cook one night per week.

“I cook the catfish and oyster po’boys. I cook it all,” Groves says. “I’ve been working in kitchens for years, and my family owns restaurants.” 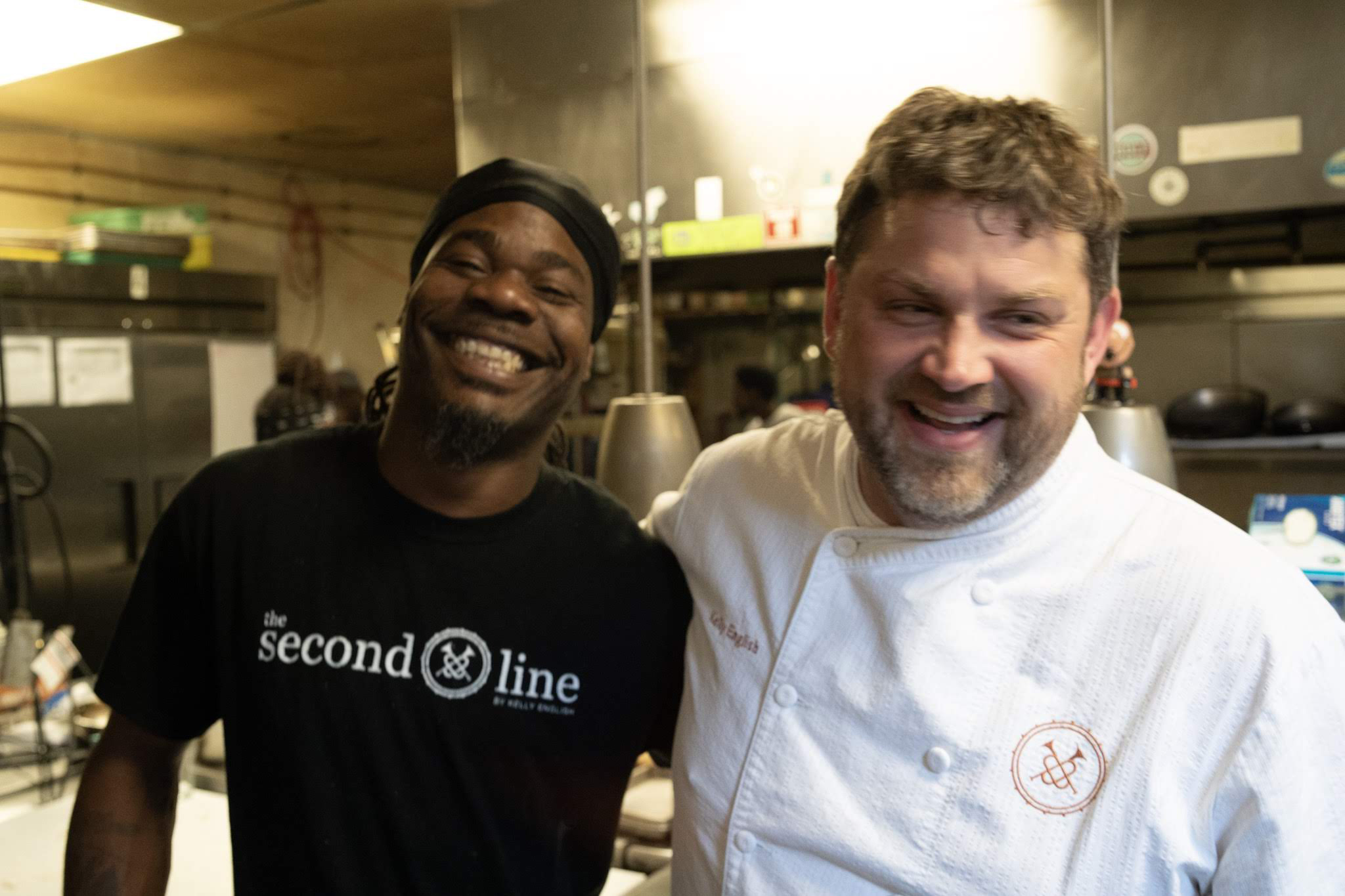 Groves knows the importance of his role as a dishwasher:

English, who considers himself head dishwasher, says some nights are so busy that everyone has to jump in and help out with dishes.

“There isn’t anyone in the kitchen who is above jumping in to help,” says English.

“One of the most demoralizing things you can do is walk into work as a dishwasher, and there are dishes piled up past your head. That happens sometimes. It’s a hard job. It’s a position that’s the make-or-break job in the restaurant, and it’s probably the most underappreciated role.”

Bianca Phillips writes about vegan food (and shares images of everything she eats) on her blog, Vegan Crunk. She’s the author of Cookin’ Crunk: Eatin’ Vegan in the Dirty South. By day, she works as the communications coordinator for Crosstown Arts/Crosstown Concourse. She and her partner, Paul, are the proud parents of five cats and one very stubborn (but adorable) pit bull. @biancaphillips