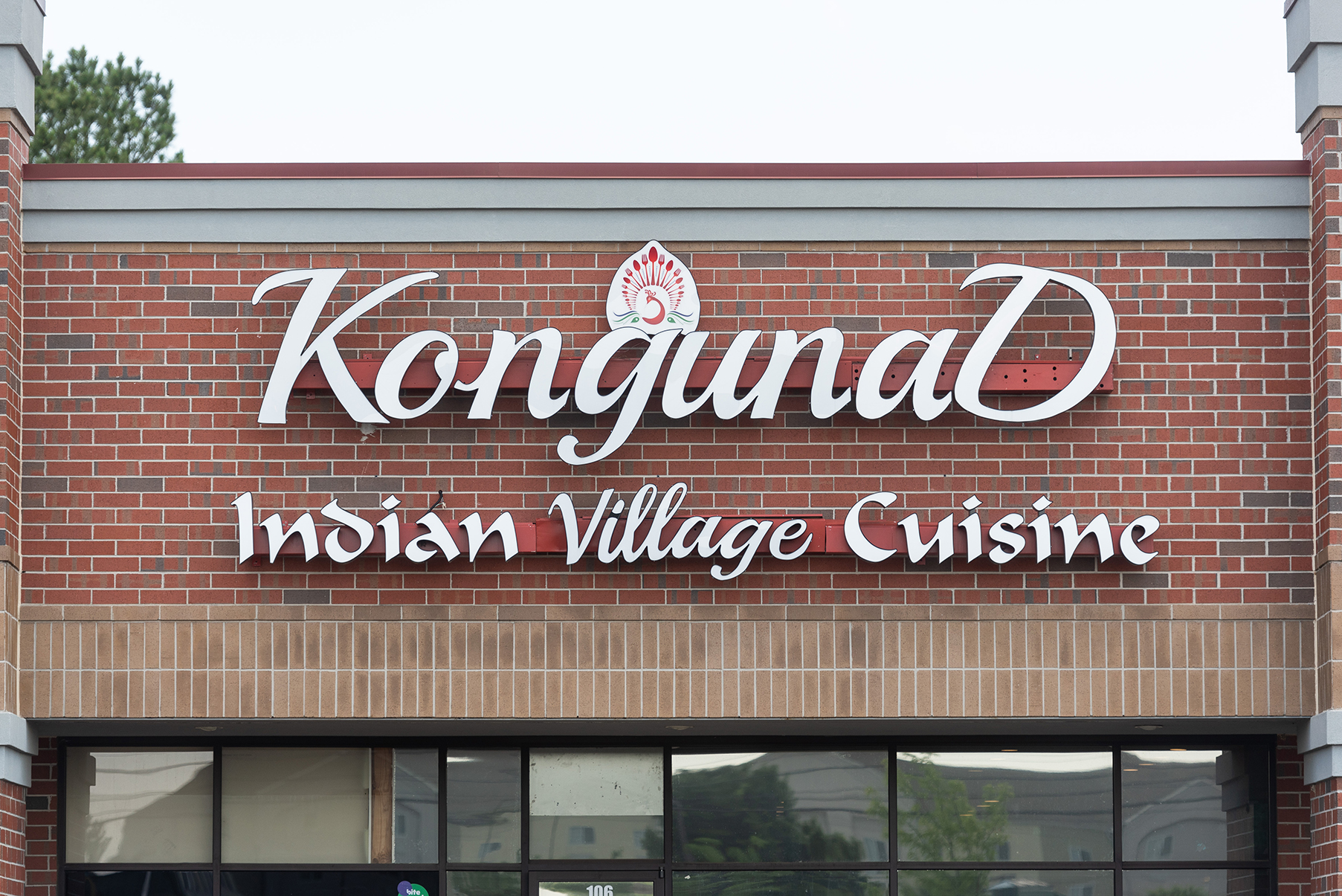 “Amma kai pakkuvam” is what Karuna Maruthamuthu strives for when he prepares the village menu dishes at KongunaD, his restaurant on Hacks Cross Road in Memphis.

In Tamil, the language of the South Indian state of Tamil Nadu, this phrase means “mother’s matured magical touch.” 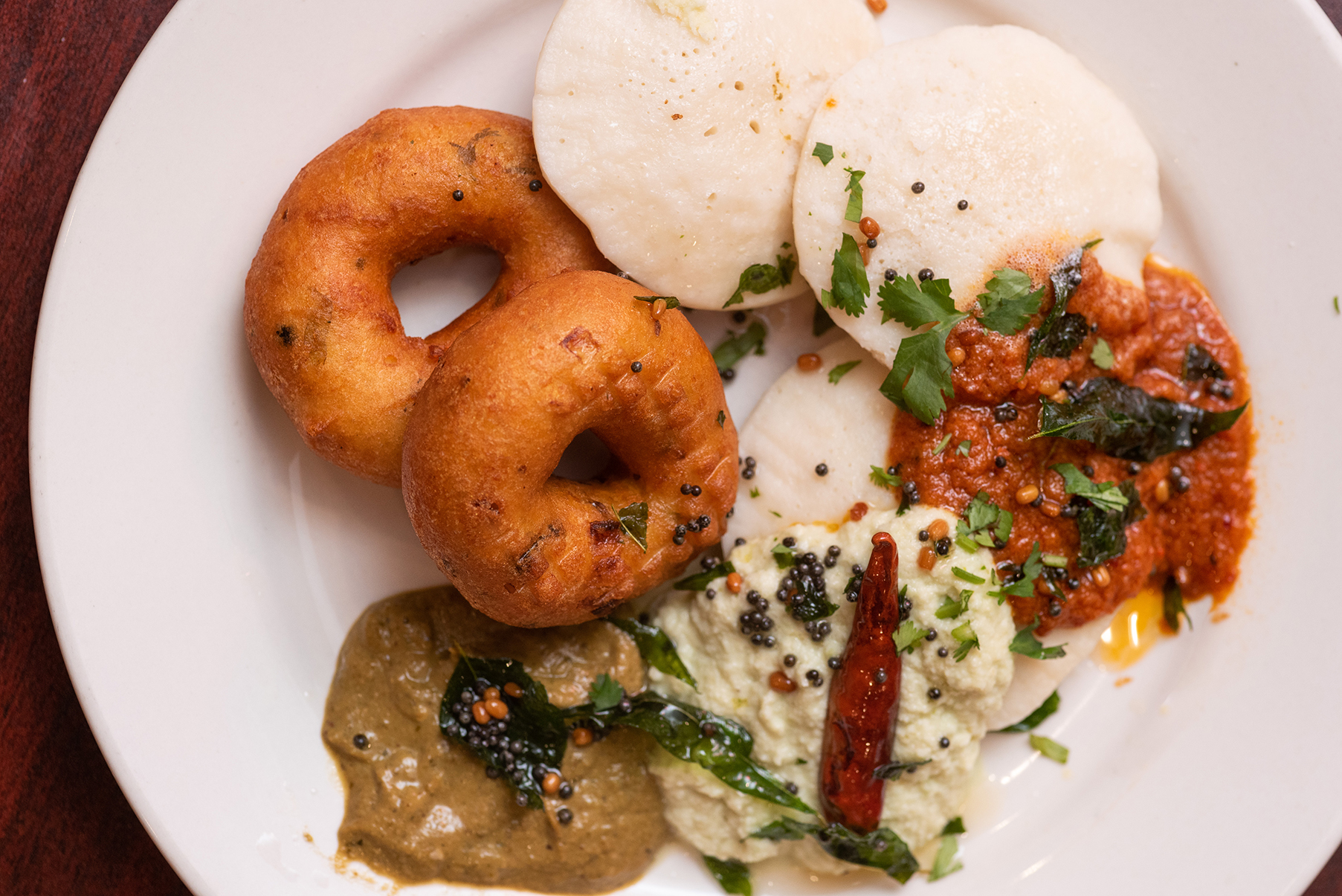 Growing up in Noyyal, a small village in Tamil Nadu, Karuna always relished his mother’s cooking, especially enjoying the taste and aroma that came from her dishes. He fondly recalls the pulicharu she would make from leftover rice and tamarind (sweet-sour tasting fruit) extract, seasoned with spices to add flavor and served piping hot over banana leaf. (Serving food on banana leaf is a long-standing South Indian tradition that is both nutritious and eco-friendly.) “This simple dish has my mother’s touch always,” says Karuna.

As a young man, Karuna followed in his brother’s footsteps, pursuing a career in hotel management and catering technology in South India. His early experiences include working as a multi-cuisine chef for the Taj group of restaurants in India and spending 10 years in the United Kingdom as a pastry chef. 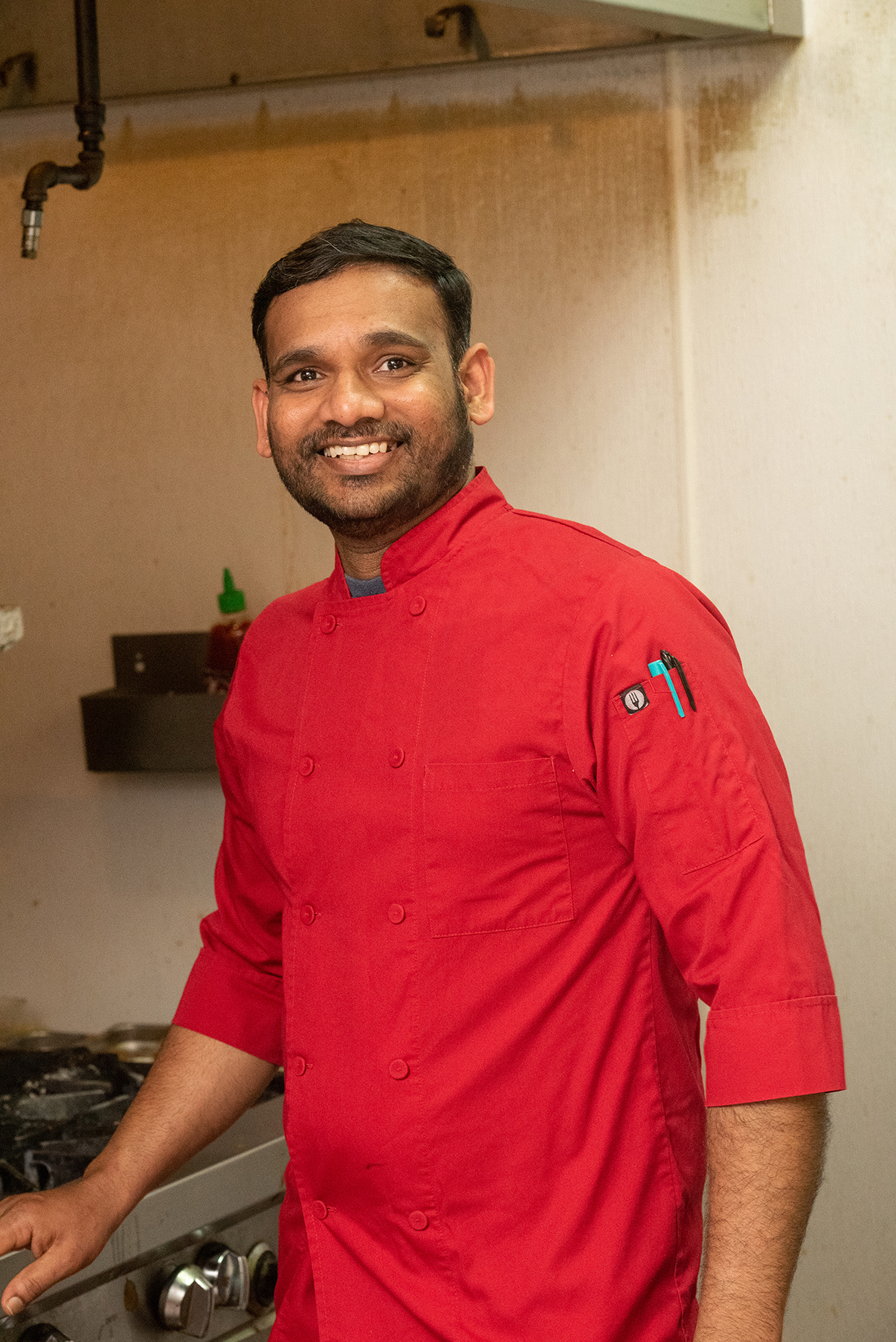 When Karuna came to the United States in 2011, he started working in restaurant franchises. His initial foray into the field included helping a fellow Tamilian open a restaurant in Bentonville, Arkansas, and starting Biryani Café with his uncle in Tampa, Florida.

Armed with 17 years experience in the restaurant industry, Karuna opened KongunaD in August 2017.

It began when a group of his childhood friends expressed interest in starting an exclusive Tamil restaurant. 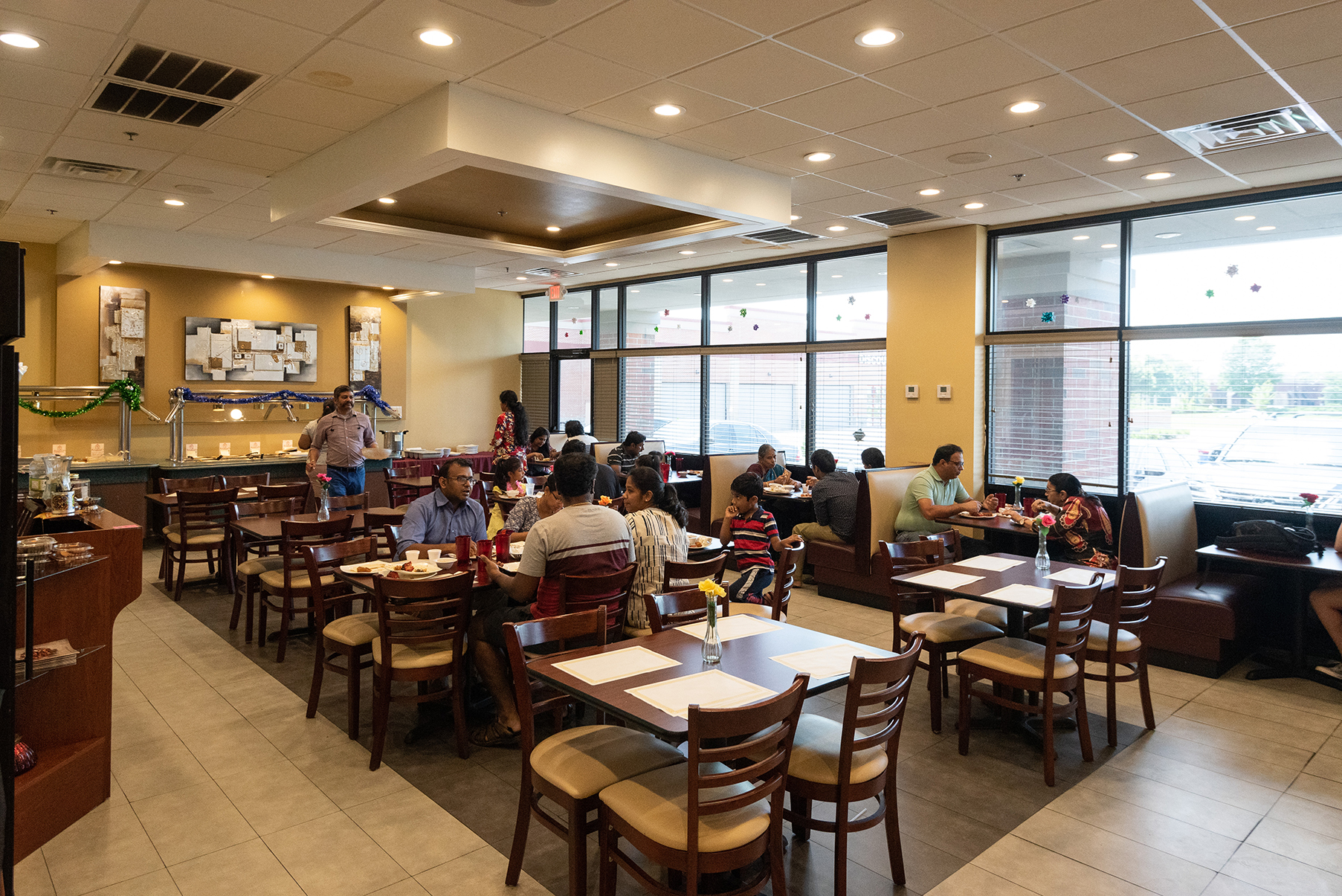 They decided to name it KongunaD (dropping the ‘u’ off the original Tamil spelling Kongunadu) after weighing options such as Biryani and Curry, names more readily recognizable in the restaurant community. “We wished our brand represented the place we came from—Karur district,” says Karuna. Karur is one of the 10 districts in Tamil Nadu that make up the region known as Kongunadu.

KongunaD offers both South Indian and North Indian food items on their regular menu. They also serve Indo-Chinese fusion food to meet the needs of a wider audience. Karuna has four juniors helping him run the restaurant. The team offers services ranging from meal planning and catering to hotel management. “Since we are catering students, we can make anything out of the menu,” says Karuna. They have as many as 700 items in the catering menu and have filled orders for customers from across the Mid-South. 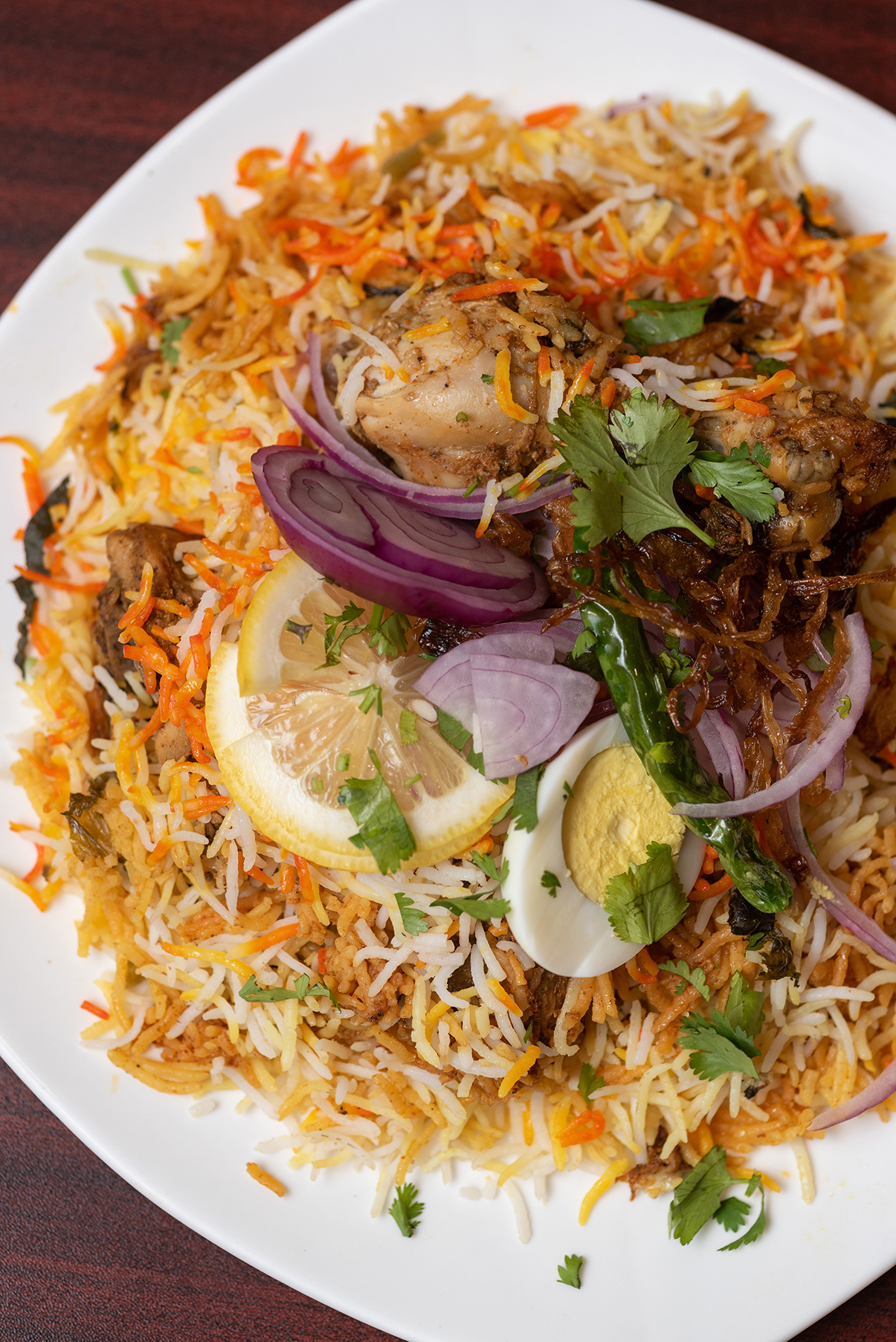 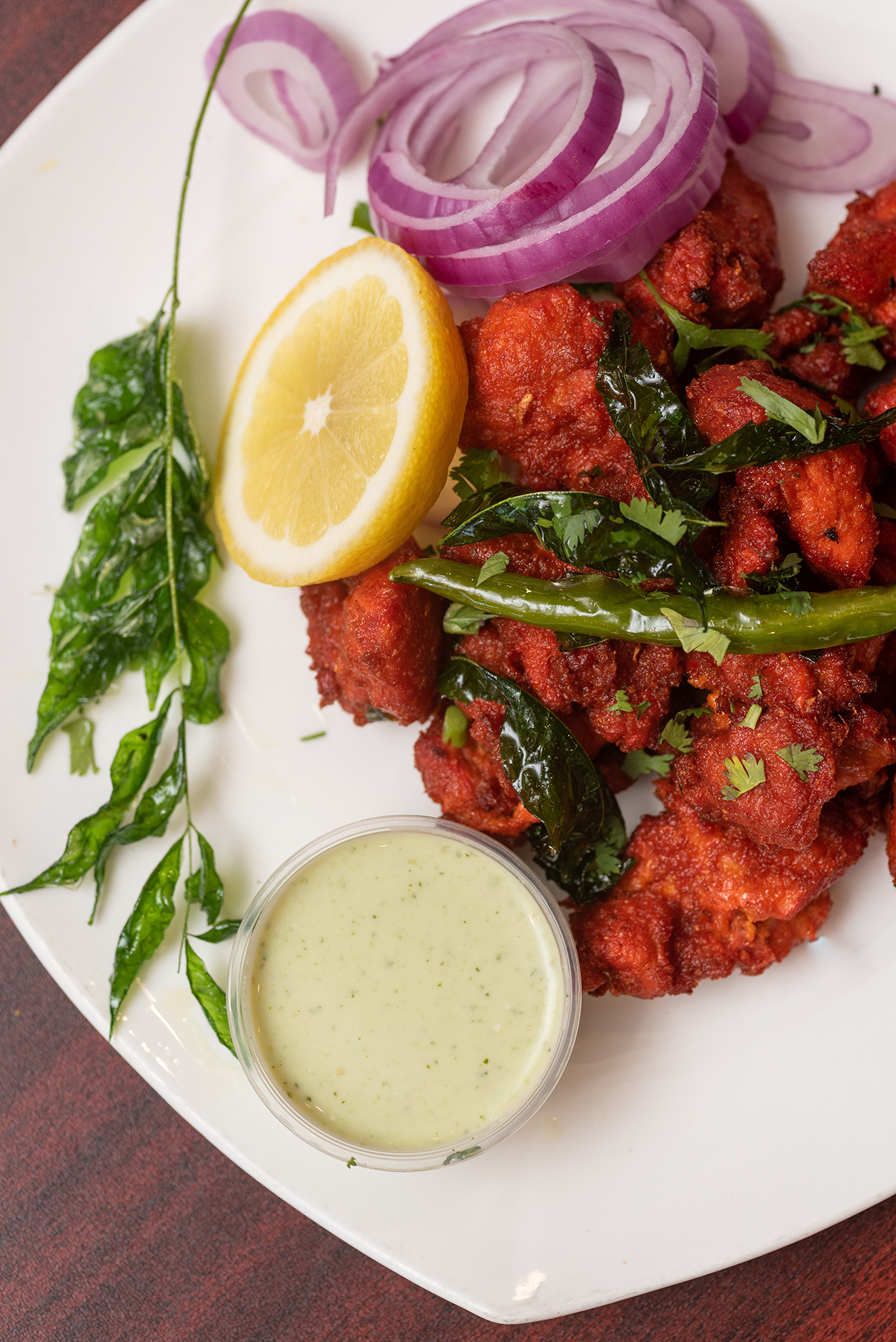 Unlike North Indian cuisines that rely heavily on wheat for main courses, Kongunadu uses rice as its base and includes recipes collected over the years from all the different towns of the region. Kongunadu cuisine is known for using fresh ingredients with minimal oil. This southern region is the top producer of turmeric, coconut and sesame oil. Cooks in the area follow the farm-to-table concept, incorporating these ingredients in everyday meals.

The high-quality turmeric produced in this area is widely used in Kongunadu cooking. And it is the spice that gives a deep yellow color and aroma to the curries. This cuisine also differs from the rest of Tamil Nadu by using coconut in most dishes. The concept of ‘pickle making’ using sesame oil is believed to have originated here because of the abundant growth in oil seeds. Though the Kongu community has traditionally been vegetarian for religious reasons, the region is also famous for non-vegetarian items made from mutton (goat), chicken and fish. 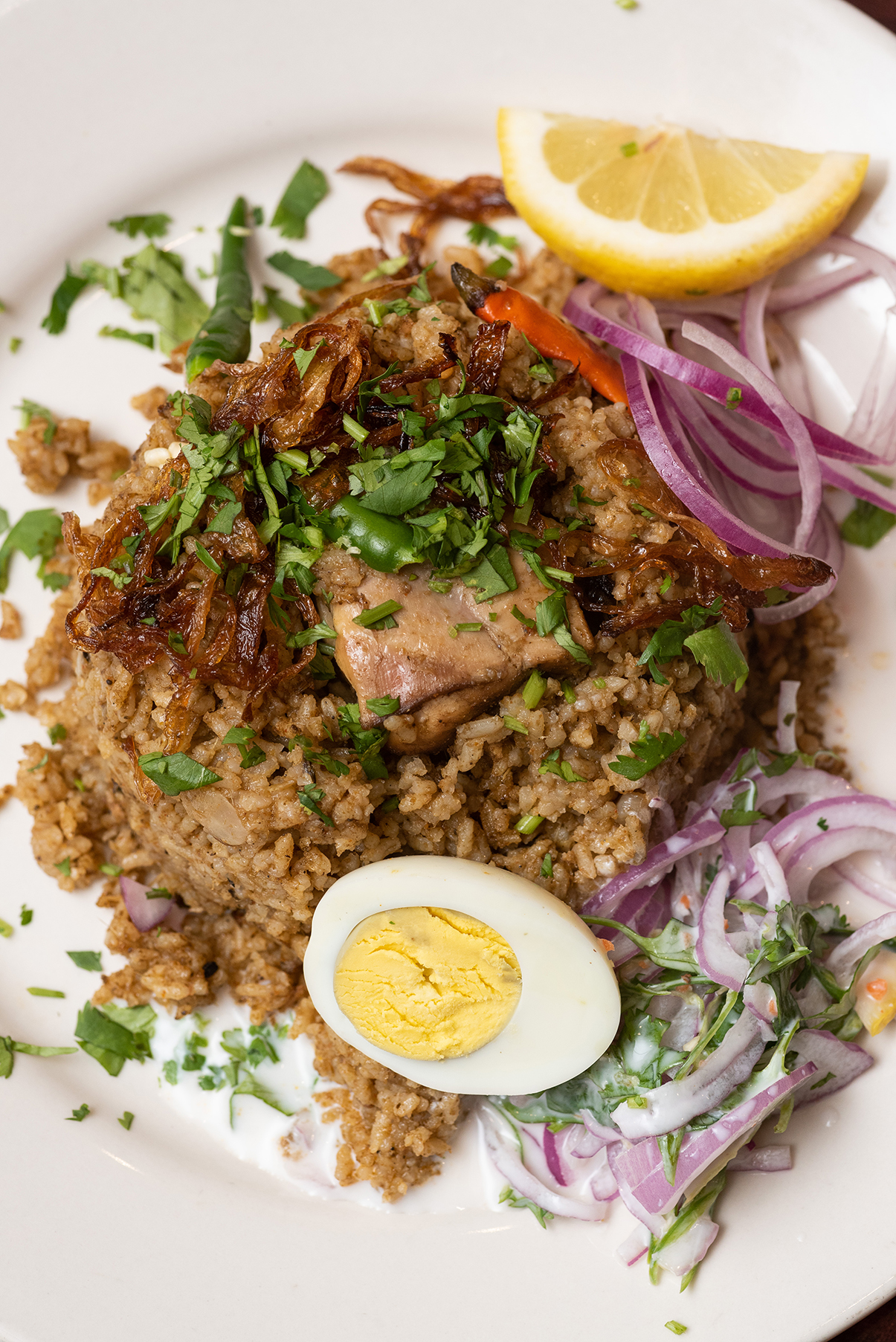 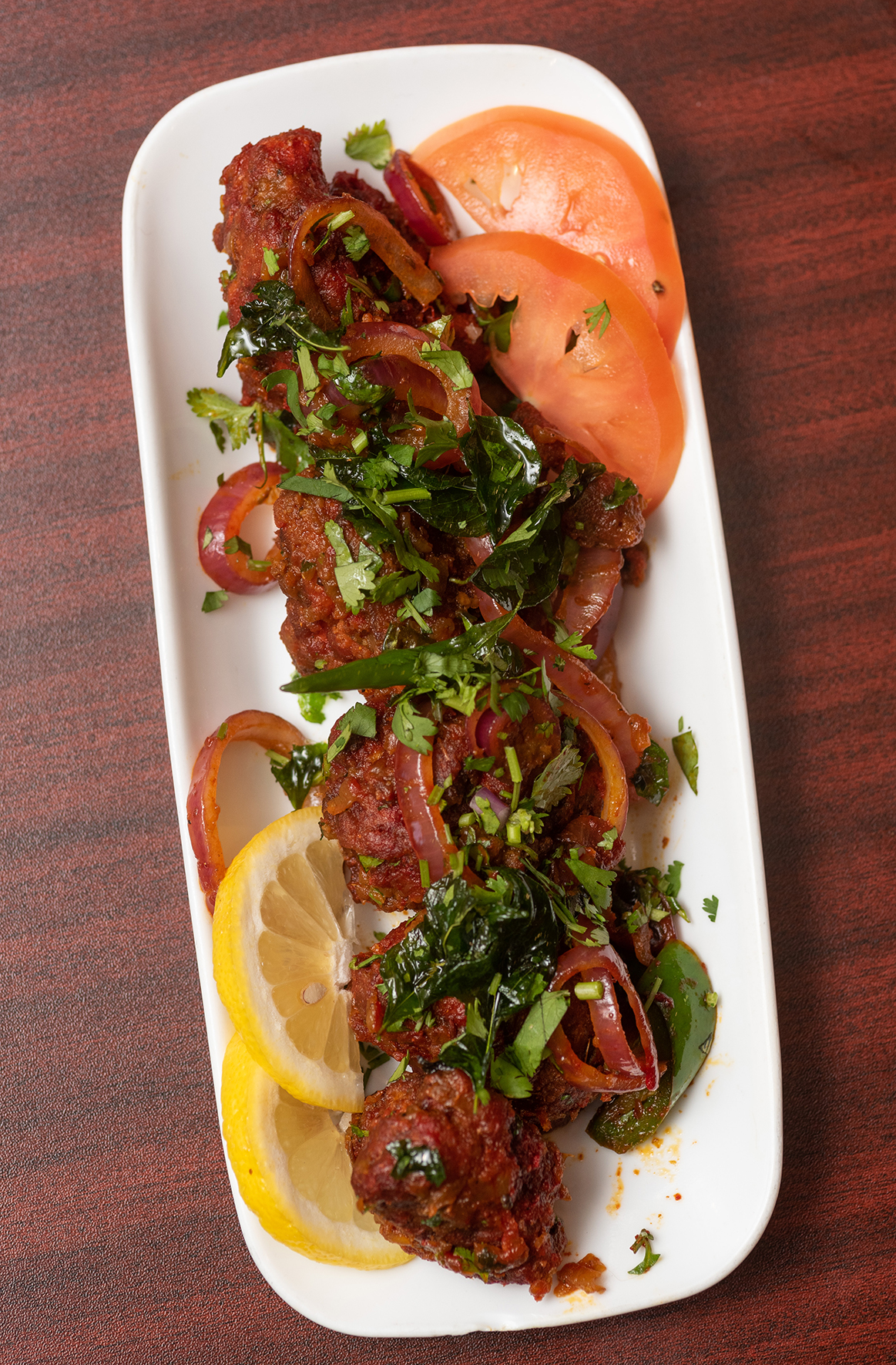 KongunaD’s weekend buffet and dinner specials include Thalappakatti Mutton or Chicken Biryani and KongunaD Chicken Fry. “Our cuisine involves no marination of any kind. Ginger and garlic are crushed and added on the spot,” says Karuna.

“No spoon measurements—I use my eyes and hands to judge the requirement for each recipe.”

KongunaD’s weekday lunch buffets ($9.99) are very popular—thanks to the restaurant’s proximity to FedEx World Headquarters. Customers also come from International Paper and AutoZone. The majority of his customers are Indians, but Americans are also discovering this southern cuisine. 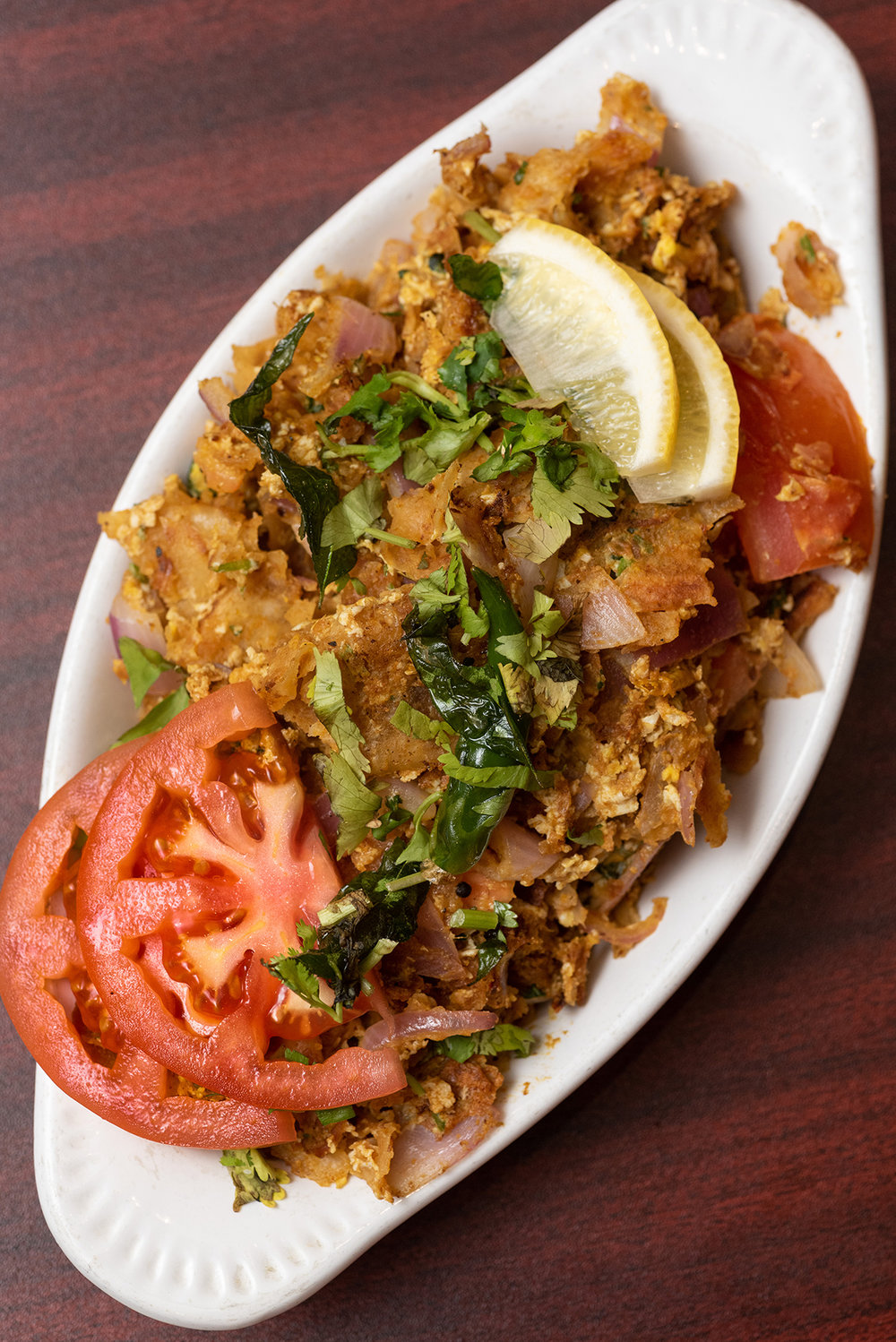 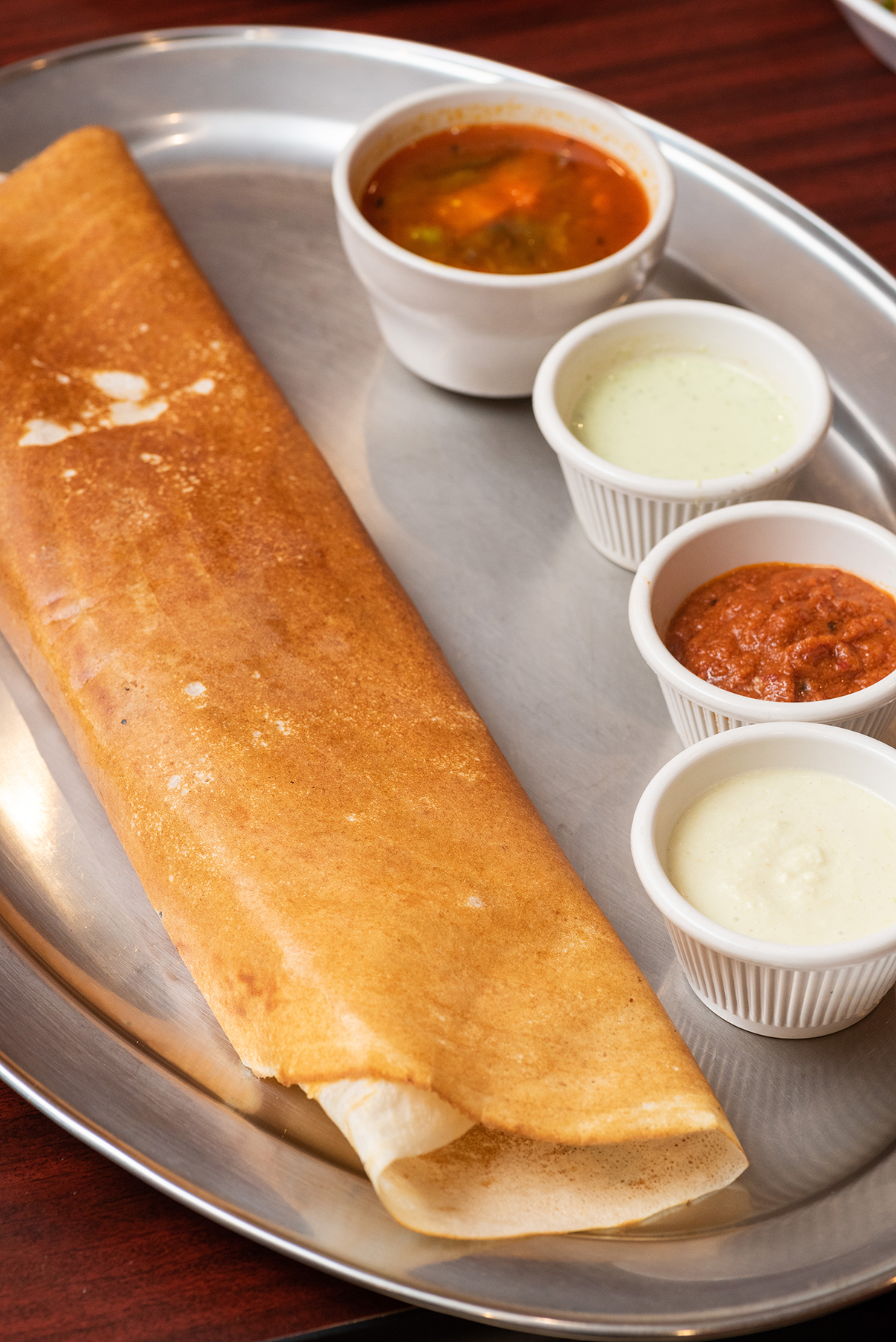 “Since we are a South Indian restaurant, we offer complimentary dosa (popular rice-based crepe) in our weekday lunch buffet,” says Karuna. Butter chicken with garlic naan (pita-style bread) and tandoori grill items are favorites among Americans. Idly (rice cake made from fermented rice and urad lentil dough), another southern staple, is also well received because it is steam cooked without oil.

“Our weekend customers come from neighboring stores such as the Balaji Super Market [which sells Indian foods],” says Karuna. Since Kongunadu food isn’t readily available, customers come in with recipes for Karuna to make. Chicken Pallipalayam and Chicken or Mutton Sindhamani are special recipes included in the village menu. Such regional dishes have become popular because they give customers a taste of home. 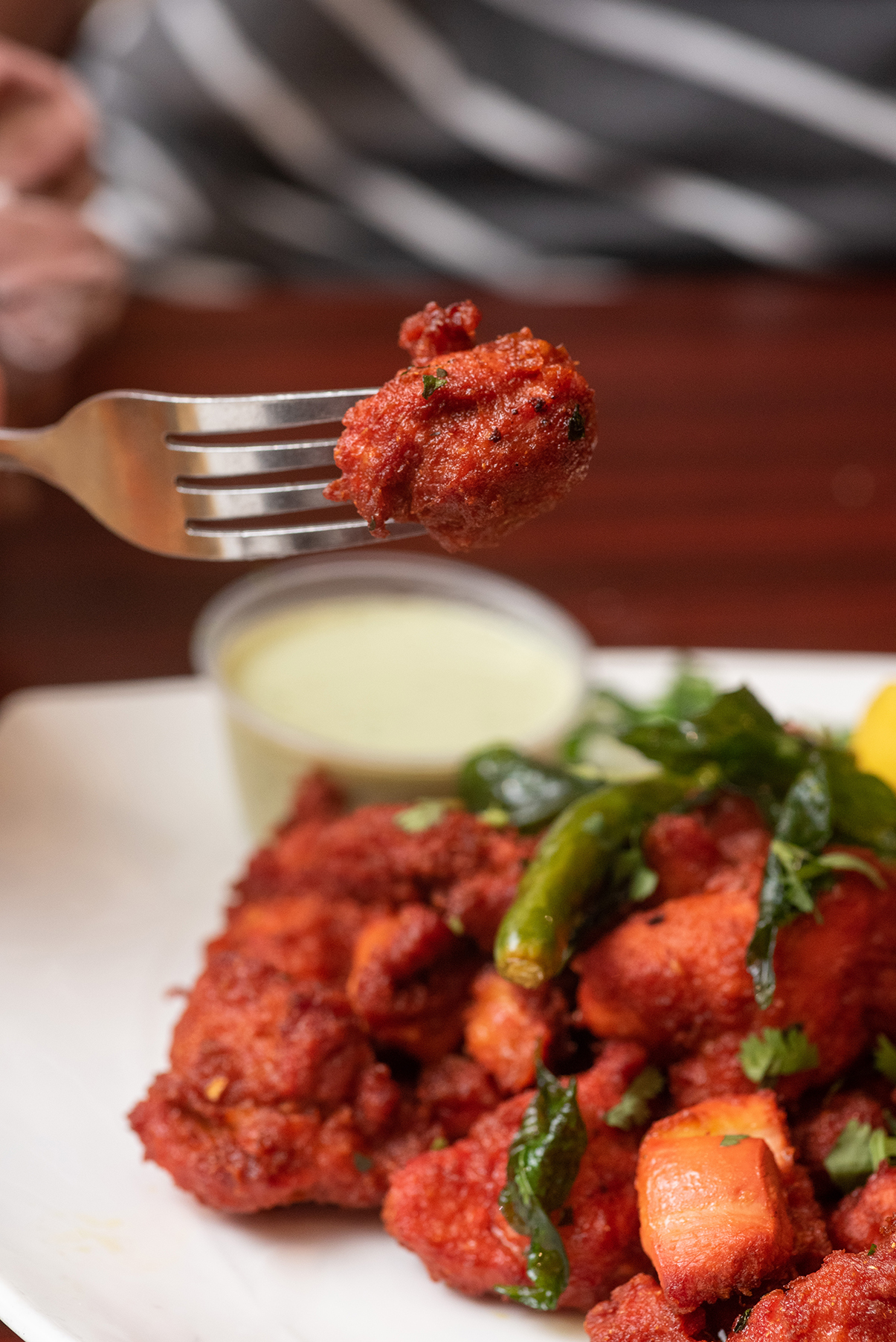 KongunaD caters events for various Indian associations and participates in the annual India Fest. They also reach out to religious communities in the area. “My food philosophy lies in introducing this South Indian village cuisine to the rest of the world,” says Karuna.

Having built a strong customer base, the restaurant anticipates an expansion—opening more restaurants with the KongunaD brand—but vows not to lose its homegrown taste. 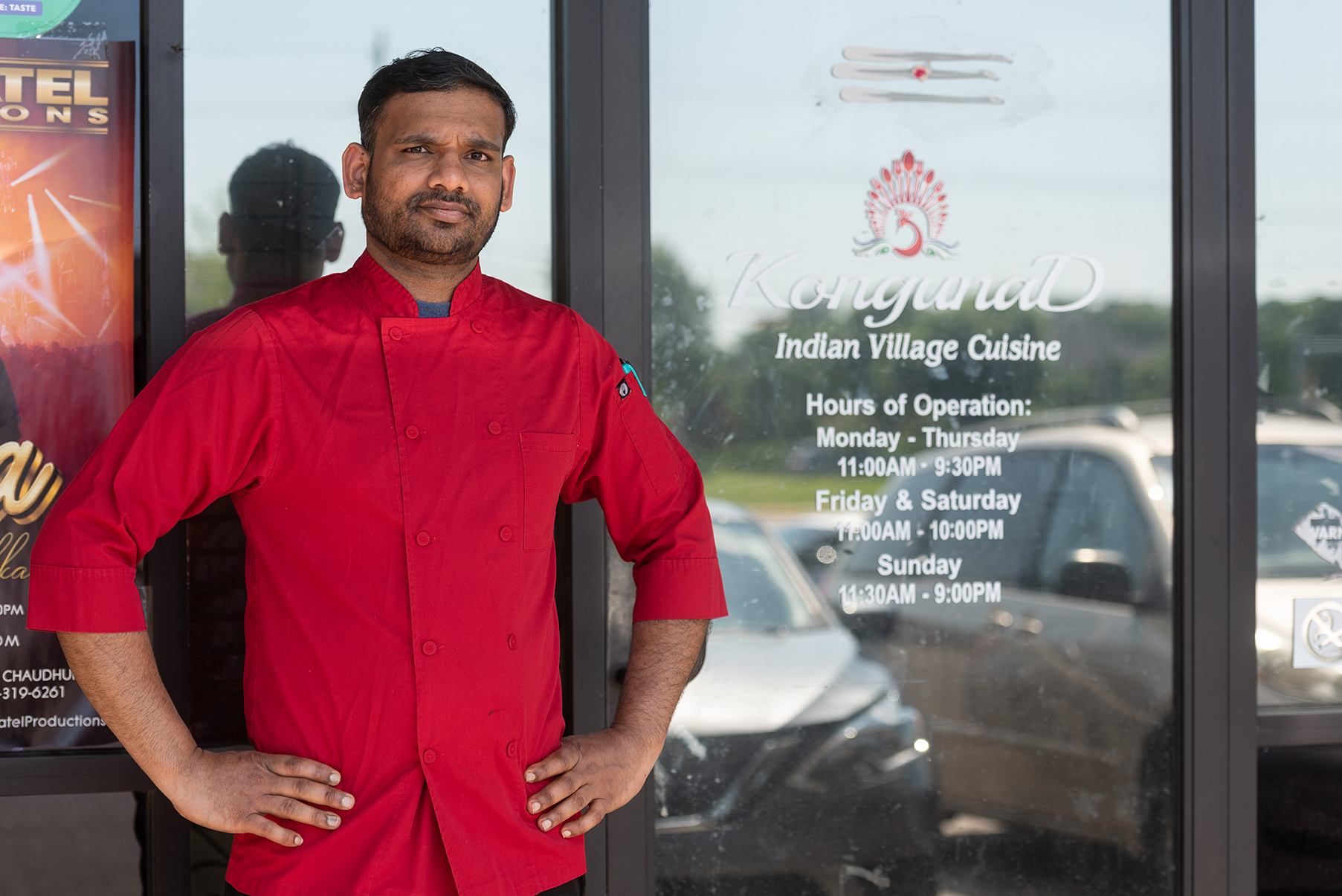 “My ultimate goal is to make sure that my cooking meets the standards of my mother’s,” says Karuna.

What to Order at KongunaD

Kongu Specials for the Adventurous

Meena Viswanathan grew up eating idly in South India, and it continues to be her go-to comfort food whenever she is craving a taste of home. She serves as the calendar editor of Memphis Parent and has been published in several other local magazines.

New Baker on the Block

A Slice of Home