“You don’t wear the same underwear every day, so why would you drink the same beer every day?” says Lucchesi’s Beer Garden owner Tony Lucchesi.

Tony preps falafel behind the deli counter. His wife and business partner, Basma, sits at one of several tables in the newly rebranded deli that the couple reopened on August 13 of this year.

The business has been in her family since 2001, when it was Raffe’s Deli, but the deli/package-store side changed hands a couple times before it ended up with Tony and Basma. Now the couple aims to make Lucchesi’s “the ultimate beer store in Memphis,” Basma says.

“We are close to 600 beers now, and we just met with another distributor today. The beer game in Memphis is stepping up.

We want our customers to love beer and get to know beer and all the different styles. There are more than 30 styles here.”

Beers in the deli and package store are priced individually so customers can build their own four-packs or six-packs. On the Lucchesi’s Beer Garden website, the beers are arranged by styles, ranging from blonde ales and IPAs to doppelbocks and stouts. Domestics are listed as “flavored water.”

“That’s Tony,” says Basma with a laugh. “We keep our domestics just in case people want their go-tos, but a lot of people like variety.”

And, of course, the Lucchesis support local—carrying beverages from all of Memphis’s breweries.

“Tony talks to the local brewers weekly to find out what’s new and how we can support them,” says Basma. “We want to support our breweries that are doing so much for our city.”

Although the package and deli side just reopened as the rebranded Lucchesi’s Beer Garden, the Lucchesi’s have run the business’s beer garden side since 2012. Basma’s mother, Raffe Sakan, opened Raffe’s Deli in 2001. The deli offered her mother’s Syrian dishes and a wide selection of imported and craft beers in the days before specialty beer was widely available in Memphis.

In 2006, after the nail salon next door closed, the family business expanded with the addition of Raffe’s Beer Garden, a space that served as a restaurant and bar.

“I was at 18 at the time, and when the nail salon closed, I told my mom this was the perfect opportunity to open a beer bar. At the time, you could only sell or serve. The law hadn’t yet changed to where you could do both in one location,” Basma says.

Tony worked for Basma’s parents at the time, and that’s how the couple met and eventually married. By 2012, the couple bought the beer garden side of the business, while Raffe continued to run the deli and package store for a couple more years. In 2014, Raffe sold the store to Sean Feizkhah, who ran the store as Raffe’s Beer Market & Deli until September 2020, when the lease was not renewed.

Basma and Tony were thinking of moving the beer garden to Chickasaw Gardens around that time, but when the deli space became available, they decided to bring the deli and package store back into the family and rebrand it as Lucchesi’s Beer Garden: Deli, Package, & Parlor.

The couple brightened up the old store space with new lighting, new ceiling tiles, and a fresh coat of paint and re-stained wood.

“It’s come full circle. Tony and I met here, and now our daughter—she’s two—gets to run around and play in here,” Basma says. “It’s beautiful how it’s all come together.

This is what my family has done since I was in middle school. I grew up here. My dad still works here occasionally, and my mom plans to do catering out of here. She does amazing Syrian dishes. She loves cooking for people.”

The same menu is now offered both at the deli and package store and at the beer garden. That menu features a blend of Mediterranean food, such as falafel and gyros, and Italian-style paninis—nodding to Basma’s Syrian background and Tony’s Italian heritage. It’s not your typical bar food menu of fries and hot wings.

“We just wanted healthier food options. When I go to a bar, the last thing I want is fried food,” Basma says. “We wanted more Mediterranean flair and delicious, fresh deli sandwiches.”

That said, they’re working on some new menu items, and Tony will be adding a loaded french fry dish. But more plant-based items are coming too. Basma and her daughter are vegan, and Tony eats plant-based food much of the time.

“I hate the separation of vegetarians and vegans and meat eaters,” Tony says. “We want everyone to be able to eat here.” 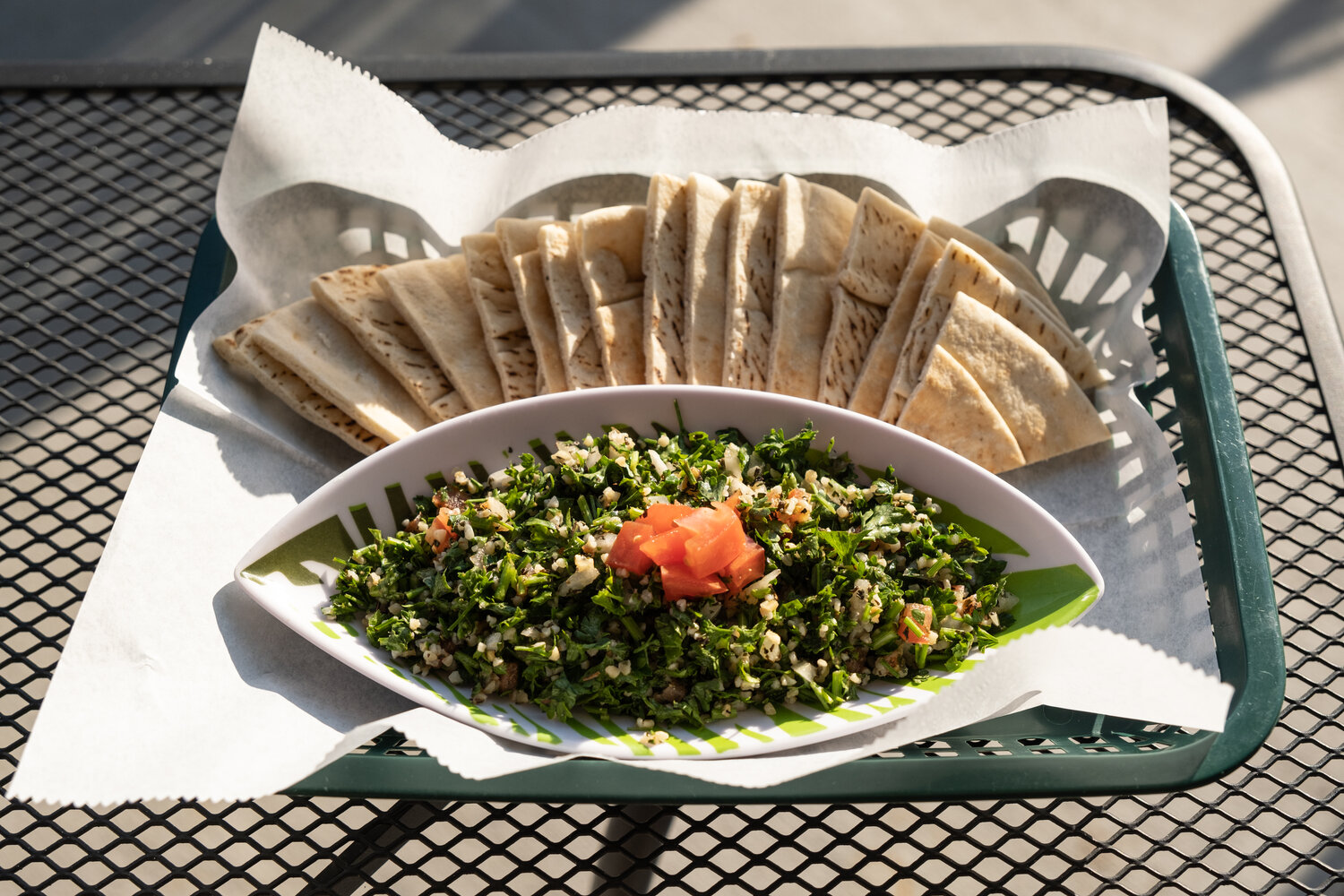 As for the beer garden side—“it’s growing, and it’s great,” says Basma. They recently added a new patio, and outdoor TVs are coming soon. Now that both the deli and beer garden are run by the same owners, beer garden customers can have the option to purchase six-packs out of the bar side. The same massive menu of beers available in the deli and package side is also offered in the beer garden.

The beer garden has about 300 regulars, according to Basma, and she says they’re seeing new faces all the time.

“It’s funny to see how our regulars are comingling with the new people,” Basma says.

A few of those regulars also happen to be pinball wizards. Eric Stenberg, an elementary school science teacher and owner of Bluff City Pinball, maintains three machines in the beer garden. He takes care of the machines’ upkeep and collects the money that regulars feed into them, and he’ll switch them out every once in a while to keep the selection fresh.

“We have a lot of people who come in and play who are in the top 10 in pinball in Tennessee. It’s very competitive,” says Basma. 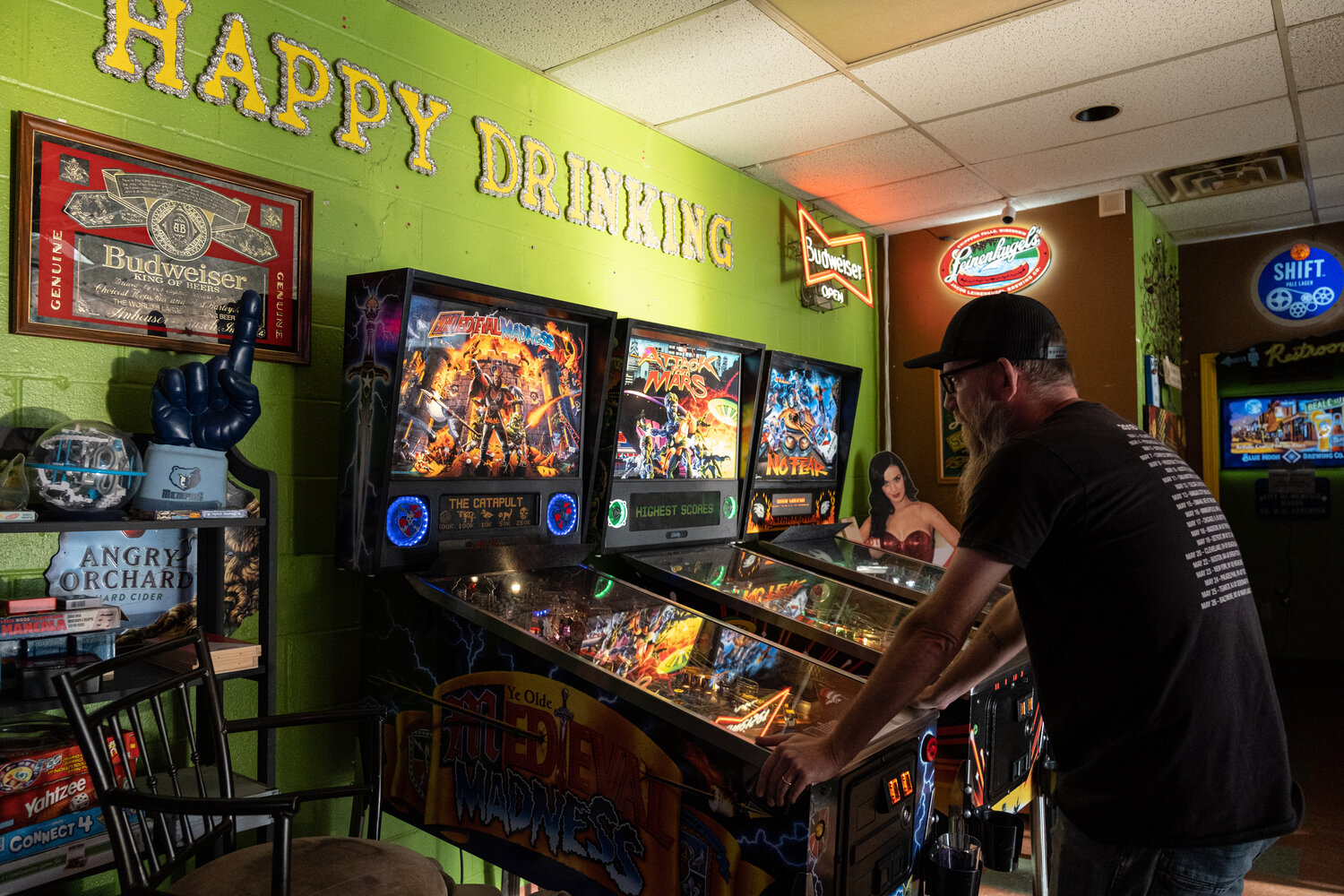 The deli and package side is open 10:30 a.m. to 8 p.m. Monday through Saturday and 12 to 8 p.m. on Sundays—which, Tony likes to point out, means that you can drink a beer in the deli at 10:30 am if you need one that early. The beer garden opens at 3 p.m. every day (except Tuesdays, when the beer garden side is closed).

Basma says they’re thinking about expanding their beer garden hours to offer brunch since they have the new patio. And they’re looking to add some beer tasting events to introduce their customers to different styles of beer. They’re also continually adding new beers on the package side, and Basma says they’ll eventually have to add more coolers to house their massive selection.

“We’re just really excited to be here,” she says. “We love this neighborhood, and we live down the street. We are hoping to be Memphis’s beer spot.” 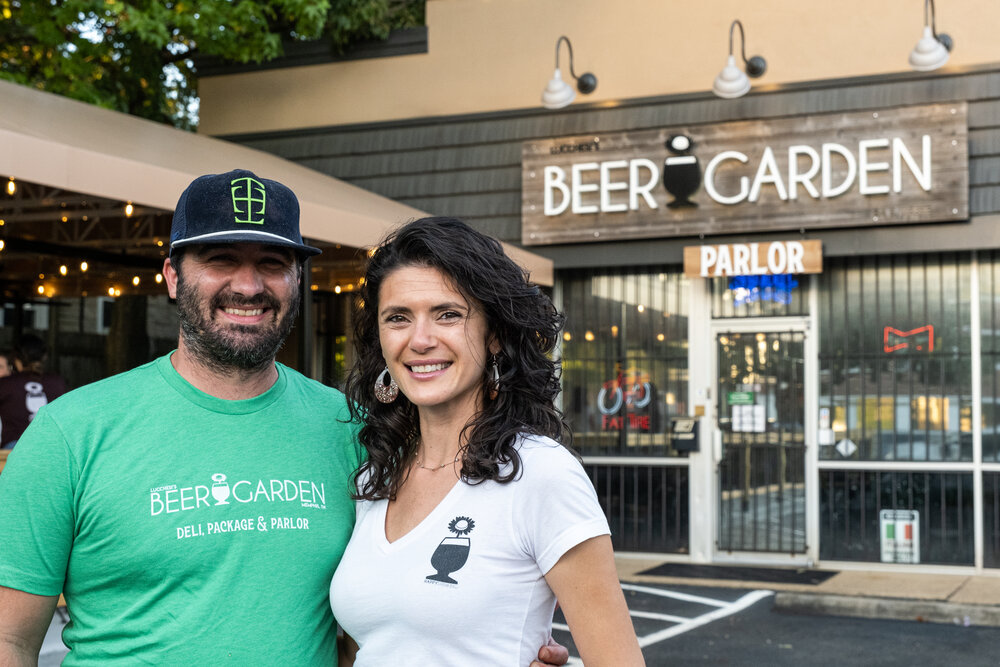 Bianca Phillips writes about vegan food (and shares images of everything she eats) on her blog, Vegan Crunk. She’s the author of Cookin’ Crunk: Eatin’ Vegan in the Dirty South. By day she works as the communications coordinator for Crosstown Arts/Crosstown Concourse. She and her partner, Paul, are the proud parents of five cats and one very stubborn (but adorable) pit bull. @biancaphillips

Rolling with the Punches