Scratch your itch for a road trip 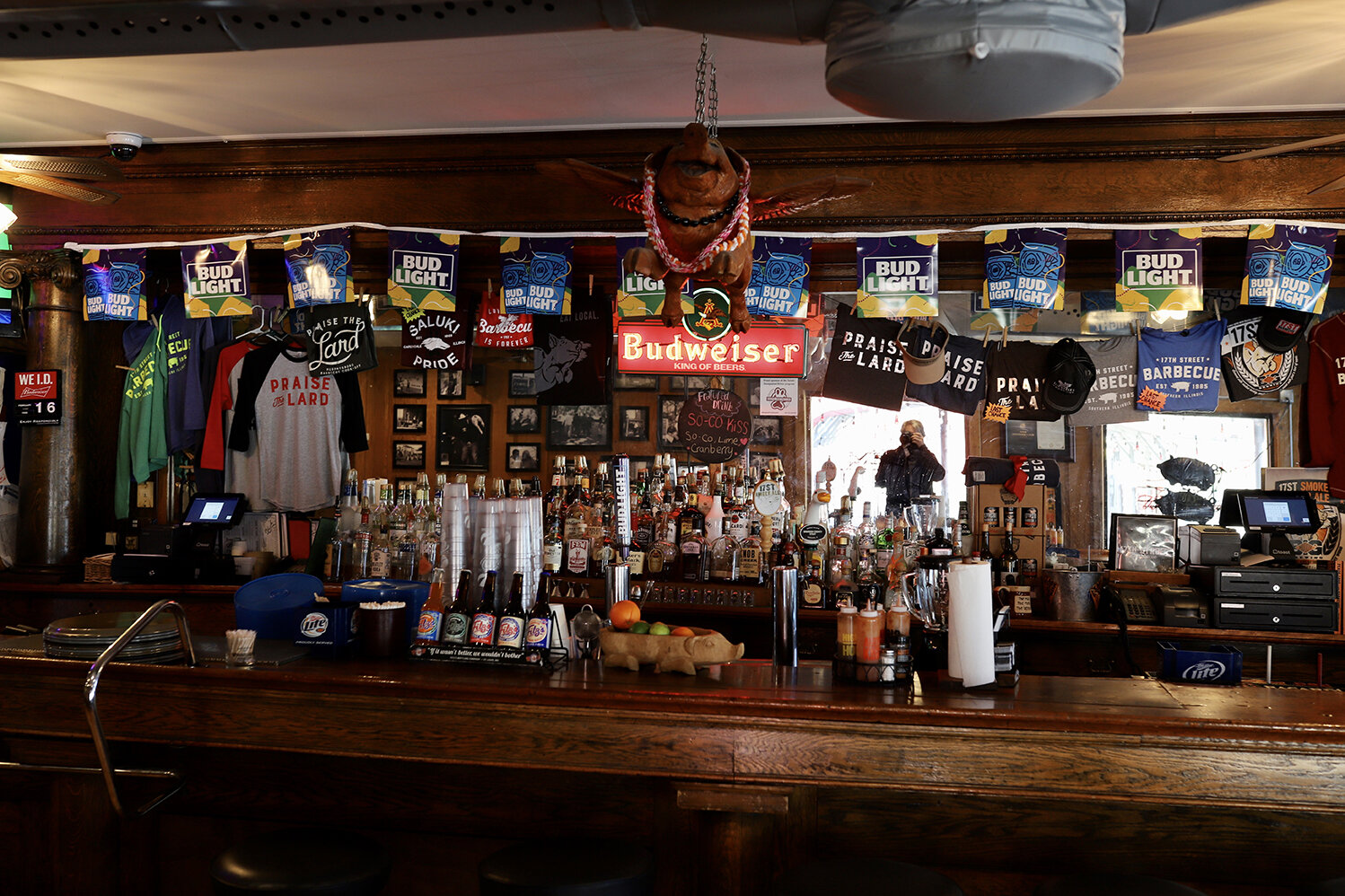 This road trip took place in February before the COVID-19 crisis hit, so please check the links at the bottom before planning your trip. Illinois is under a stay-at-home order until the end of May.

I have a note in my phone with a list of “off the beaten path” places that I want to visit.

Scratch Brewery in Ava, Illinois, had been on the list for several months before I finally convinced Richard, my main squeeze, to drive there for a quick, one-night visit last November. 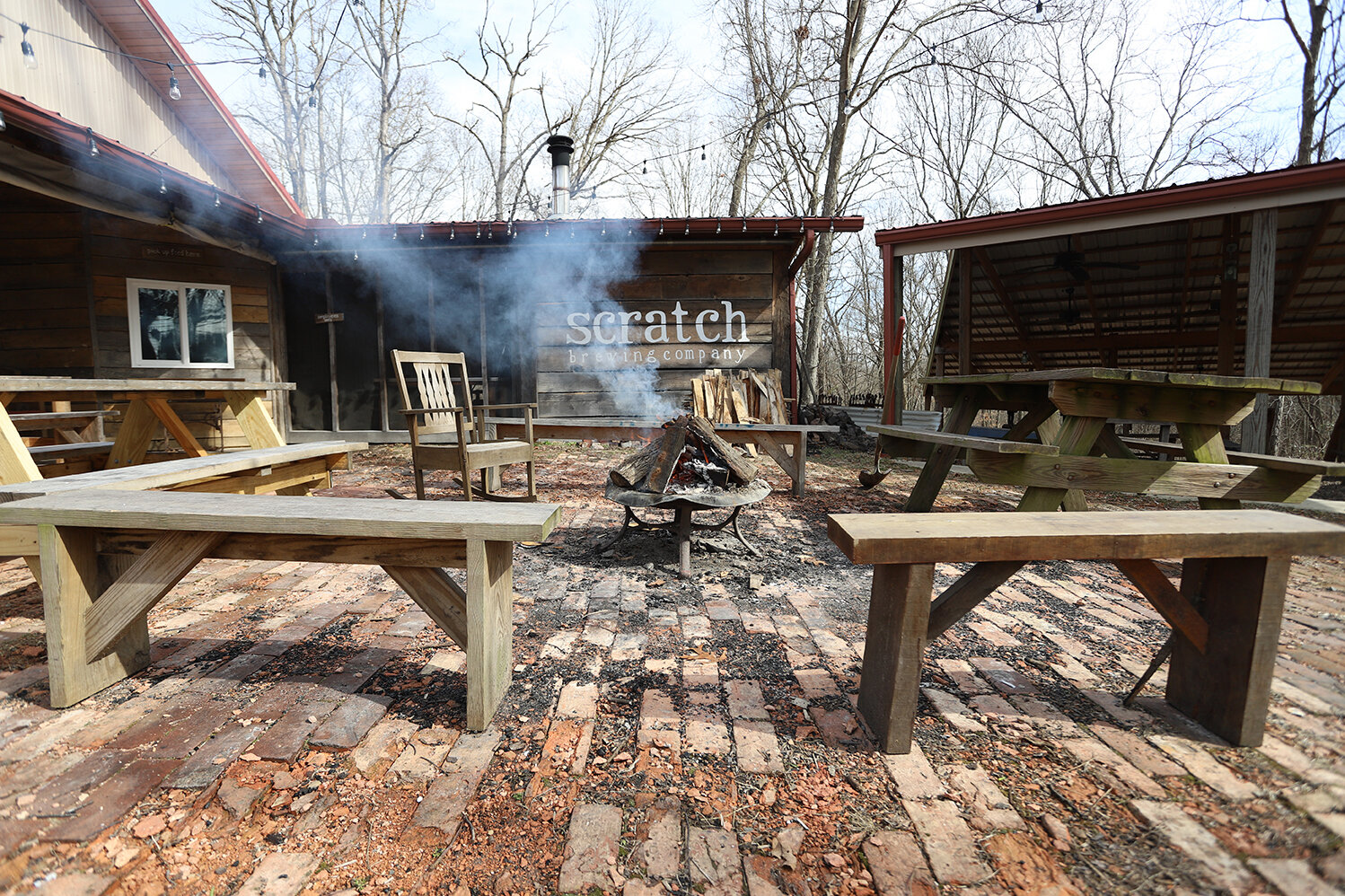 OK, I know. I didn’t think it through. November in southern Illinois is a lot colder than November in Memphis. But I needed a change of scenery, it was only a three-hour drive, and the Airbnb of one of the brewery owners was available. The Airbnb is a photography studio and apartment in an old bank on the main street of town—just a 10-minute drive from the brewery. It seemed like a perfect getaway.

Scratch Brewing Company is a farmhouse brewery about five miles from the Shawnee National Forest. At Scratch, they take their name seriously—making beer from things they grow or forage; baking their own sourdough bread, pretzels, and pizza dough; growing many of their pizza toppings; and even raising the goats that provide their cheese. It’s a beautiful place to drink beer and enjoy a meal—even in November.

We arrived midday and went straight to beer drinking. The daily menu had nine beers—Southern Wheat, Basil Ale, Filé Farmhouse Ale, Fest Beer, Fig Leaf Black Ale, Blueberry Hyssop, Barrel-Fermented Turmeric Tonic, Dry-Hopped Paw Paw, and a Sainnhus Ale. Richard ordered a pint of Basil Ale, loved it, and drank it for the remainder of our stay. I had two flights of four so I could try the remaining eight beers. (My favorites were the ones involving fruit.) We had a cheese board, a pizza, a pretzel, and, later, a loaf of bread and several bottles of the Blackberry & Lavender ale to go. (There was an entire line of highly touted mushroom beers in bottles, but I only enjoy mushrooms in very small quantities and was a chicken shit about trying any.) 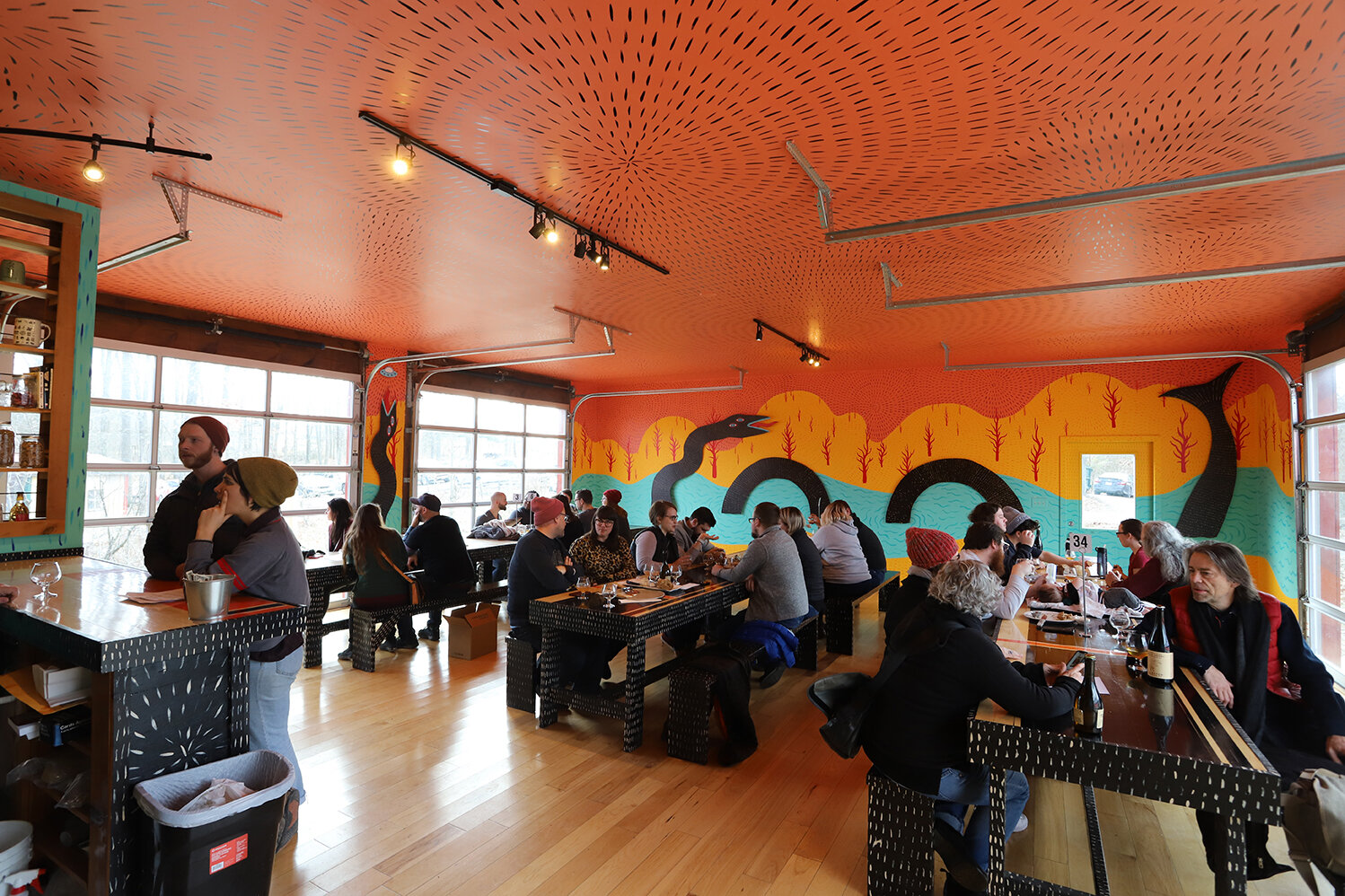 The brewery was somewhat crowded, but in a cozy way, and we found the two bartenders we met to be quite chatty and knowledgeable. There was a fire pit, the smell of pizzas baking, and goats frolicking in the distance.

This is not your average brewery, folks! Honestly, we’d never leave Scratch if it weren’t for that pesky drive back to town. 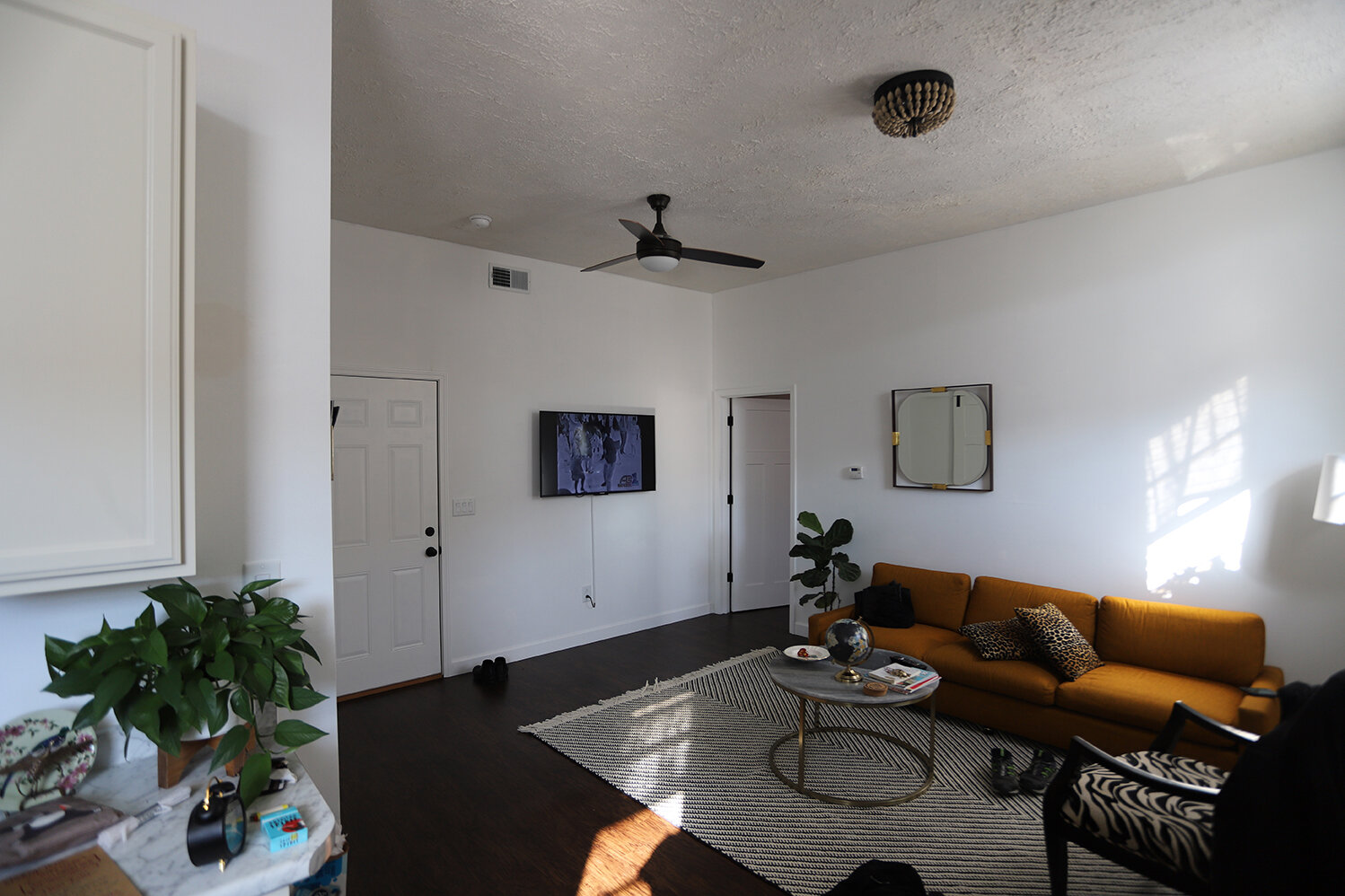 Speaking of, we felt like outsiders in the small town of Ava. When we tried to cozy up to a bar downtown, a local told me I was in his seat. So, for most of the trip, we just spent our time at the brewery or inside our Airbnb.

Our mission was accomplished in that I got a change of scenery and we got to experience the magic of Scratch, but I wanted a do-over. 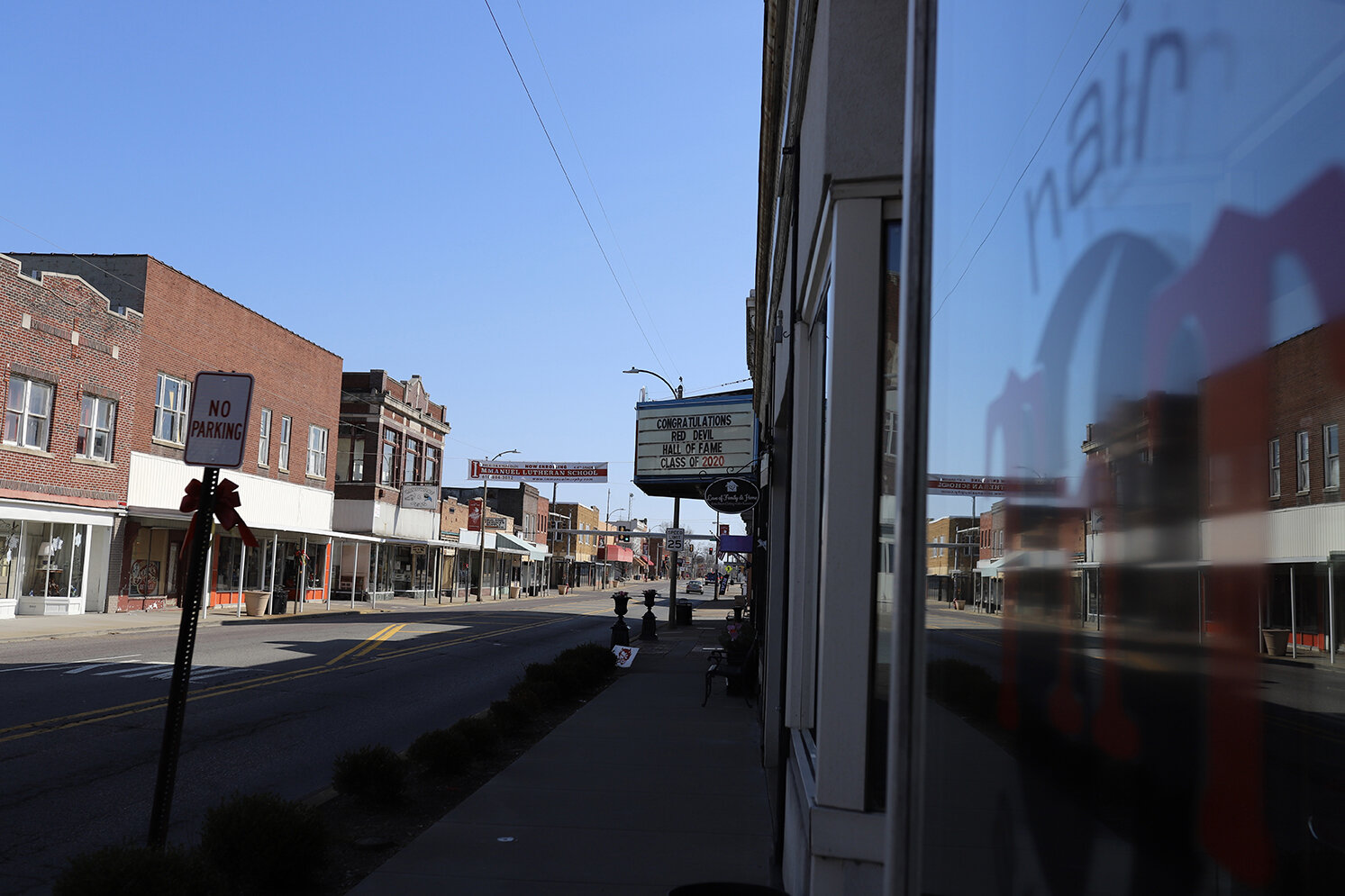 Richard’s birthday falls on Valentine’s Day, so I like to use that as an excuse to take a trip. Our best couple friends usually join us, and, since it was on a Friday, I somehow convinced everyone to make the drive back to southern Illinois. This time I booked an Airbnb called The Pink Lady in Murphysboro, which was about 20 minutes from the brewery. As luck would have it, Scratch was having Stein Beer Fest on Saturday, February 15, which meant we had 10 new beers to try.

We checked into The Pink Lady, which is downtown just off of Walnut Street in an old building that was in the process of being rehabbed. There were no other people staying in the building, but we were just across the street from a pub, right above a cute pastry shop and several antique stores, and within walking distance of several other bars and restaurants.

And, yes, February is also a very cold time to visit southern Illinois! We arrived too late to go to Scratch on Friday night, so we had dinner at 17th Street BBQ, which was damn tasty. The owners have been grand champions at the Memphis in May World Championship Barbecue Cooking Contest several times (’90, ’92, ’94), so they clearly know what they are doing. We found the food to be quite delicious (try the brisket!) and the service to be friendly. Murphysboro is actually known as the barbecue capital of Illinois. 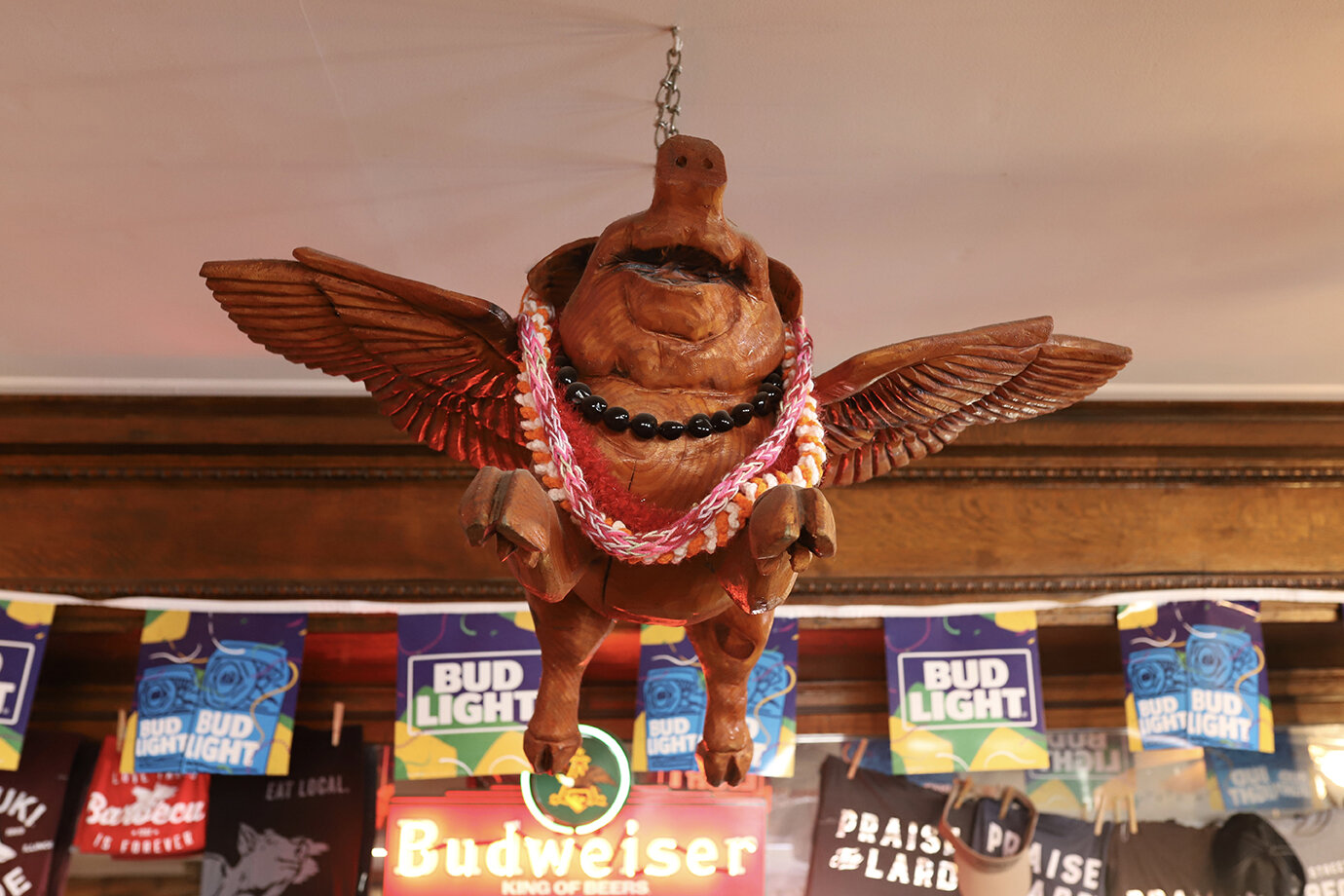 It’s also known as Apple City and has an apple festival the second weekend after Labor Day. (For those of you getting out your 2021 calendars, there’s the Murphysboro Riverside Art, Wine & Blues Fest each year in September at the historic Riverside Park Bandshell and the Big Muddy Monster Brew Fest every October.) 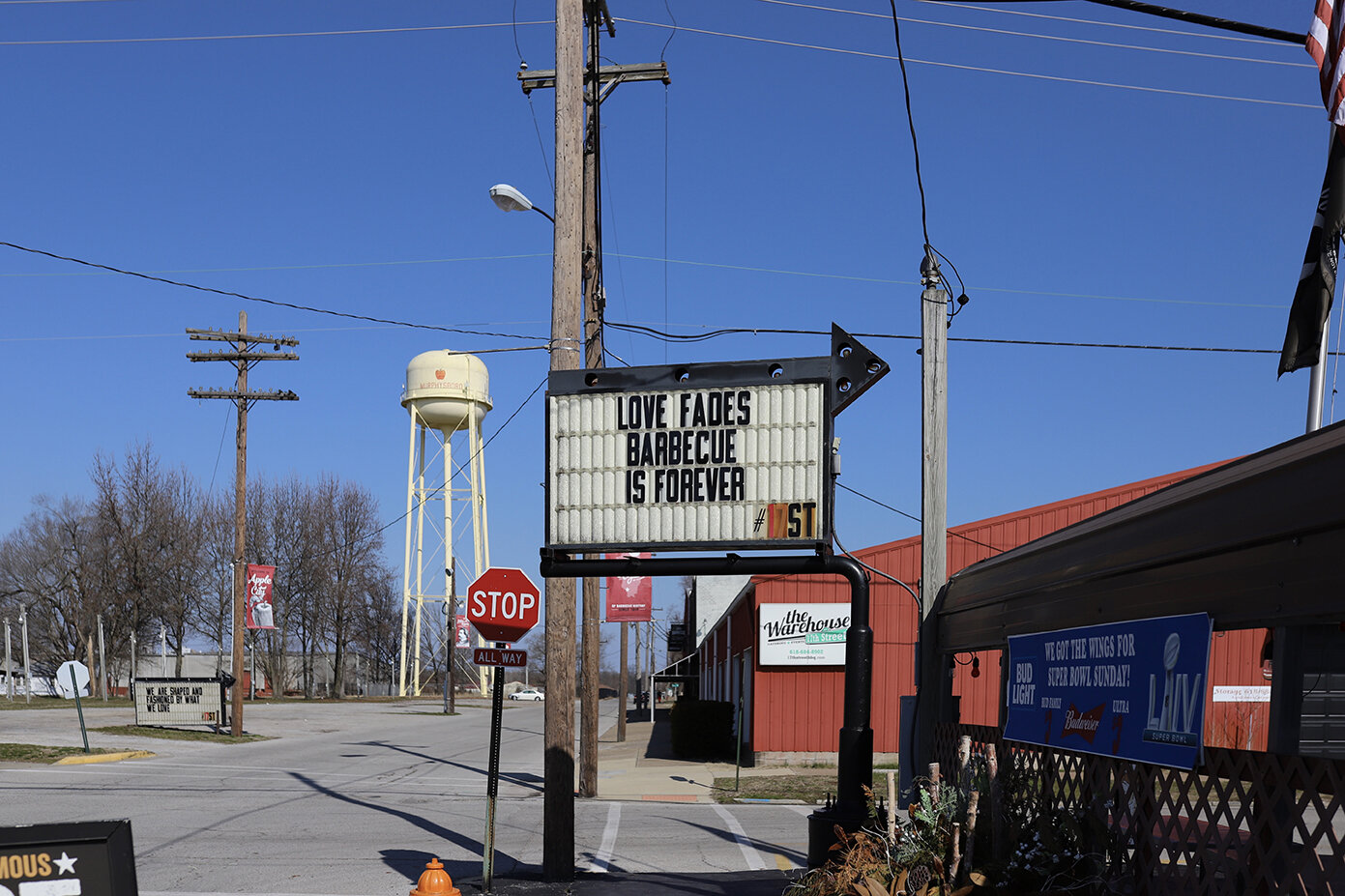 Full of barbecue, we went to River Rats, which is a dive bar, but southern-Illinois style. There were low-priced drink specials, lots and lots of very drunk regulars, religion-based “news” playing on the TV, slot machines, a private pool room, and an outdoor smoke hole. We had a couple of Miller Lites and called it a night.

Saturday morning we stopped at Rule of Pie, the “boutique bakeshop,” downstairs for a much needed cup of coffee and some discounted, Valentine-themed cookies with pink and red M&Ms (because why not?). I was really surprised that there wasn’t a full-on coffee shop in town. Before we left on Sunday, when Rule of Pie was closed, I found a cute third wave (!) coffee truck, Coliseum Coffee Works, parked on nearby Chestnut Street. Alas, it was closed for the winter.

We were the first people at Scratch, but it was by design, as I had set up an interview and photo shoot with owners Marika Josephson and Aaron Kleidon. It was great getting to know them. We learned about the brewery and the impending festival, while also asking them to pose and look relaxed and happy. (You can read the interview tomorrow!) We didn’t take up too much of their time and were happy to start trying the new beers—Sour Cedar, Farm Ale, Birch Stein, Cedar Sainnhus Stein, and lots of bottles too. Even with four of us, we didn’t come close to trying everything. 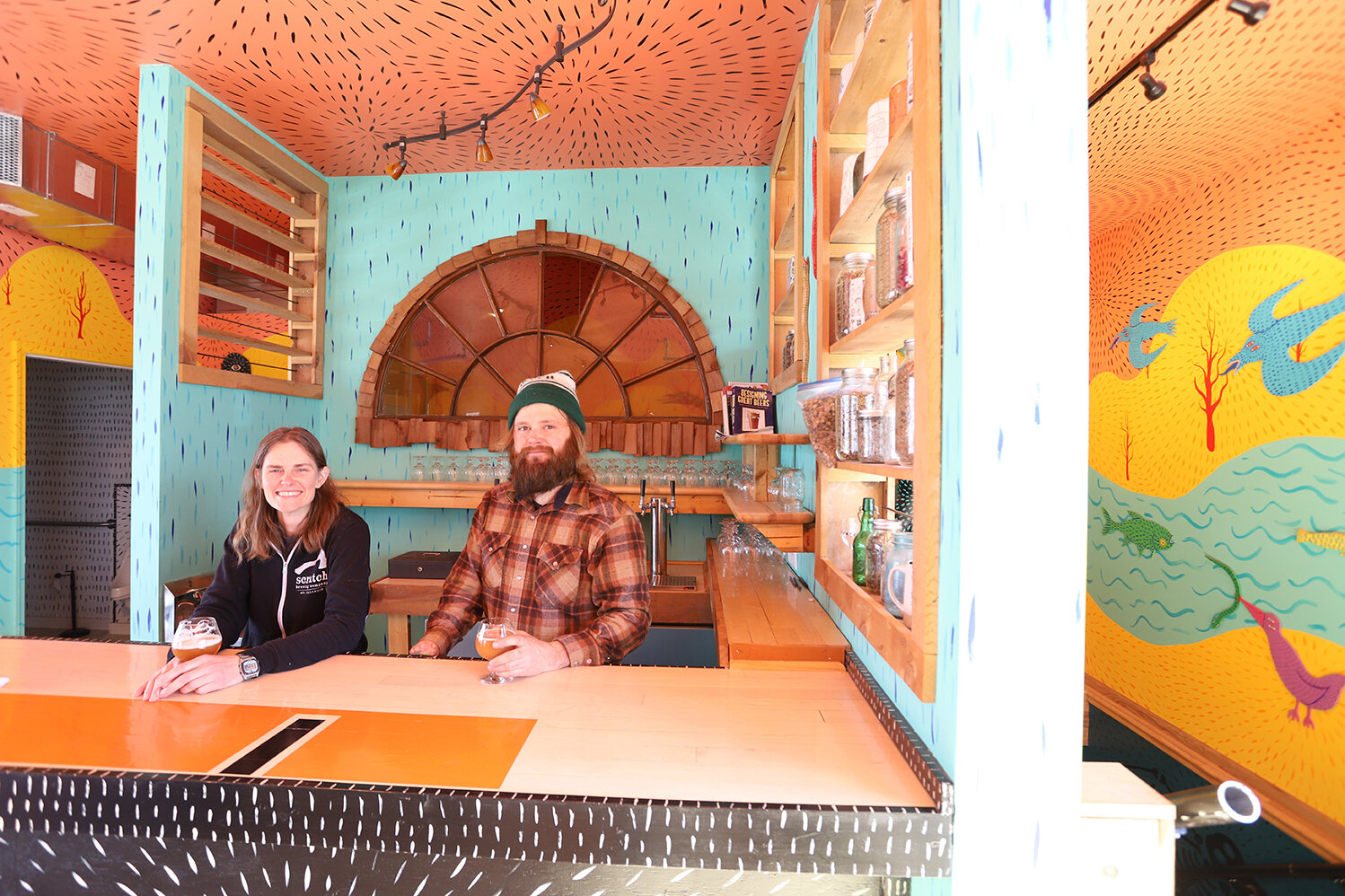 I love watching a party develop, and people steadily rolled in during the three hours we were there. It was chilly but sunny, and overall a lovely afternoon. In addition to the pizzas and pretzels we tried on our first visit, there were a delicious chili, three kinds of cornbread, and pumpkin butter to eat and enjoy.

I’ll say it again: This is not your average brewery, folks! Honestly, we’d never leave Scratch if it weren’t for that pesky drive back to town. 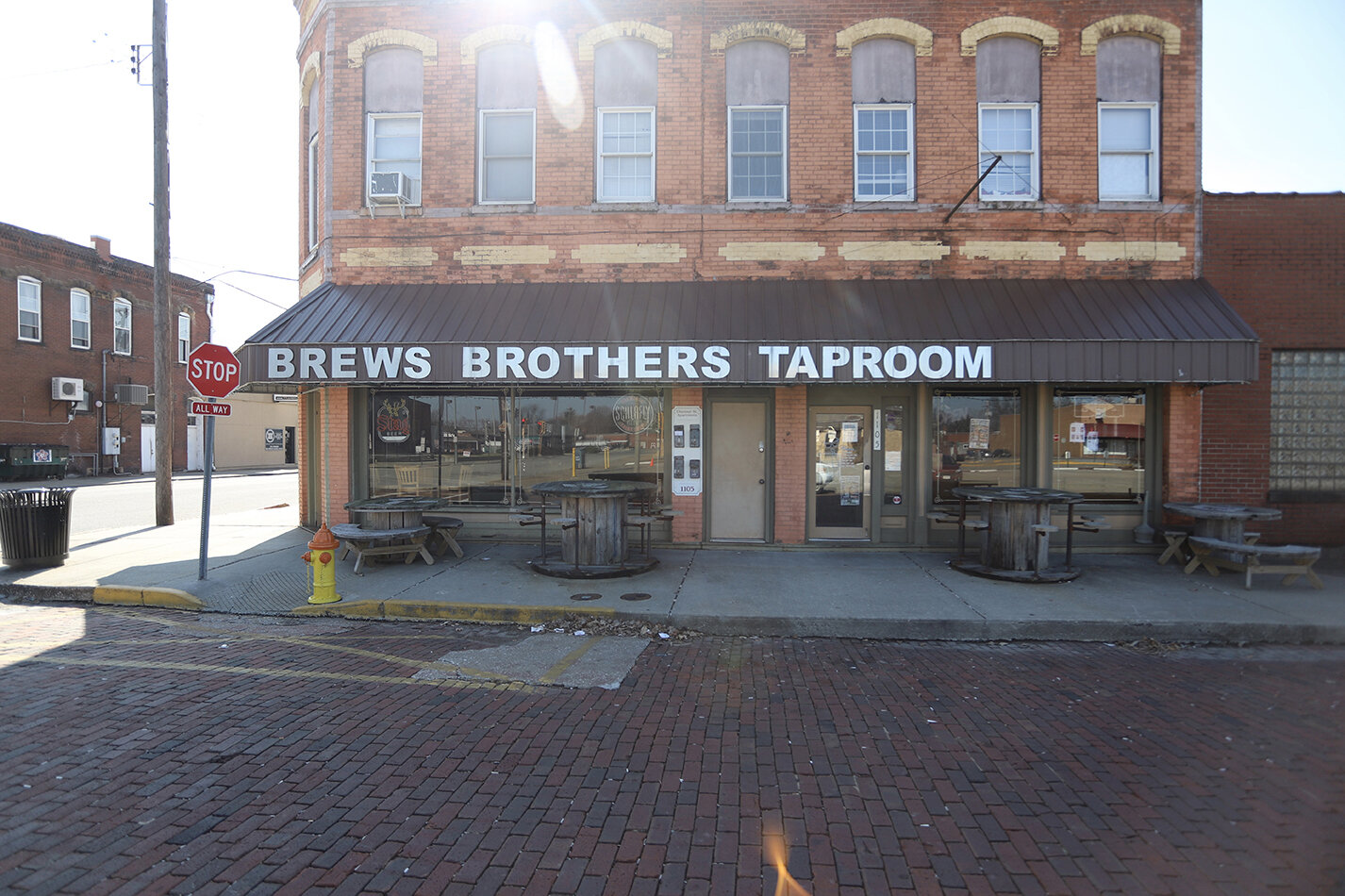 We spent the rest of the afternoon shopping along Walnut Street in the aforementioned antique stores. (I am still kicking myself for not buying the rotary phone and old ceramic pickling crocks I saw!) Once we spent enough money boosting the local retail economy, we went back to boozing. We had a pint at Molly’s Pint Brew Pub, an Irish themed microbrewery across the street with beers like German Smoked Lager, .007 James Blonde, Barleywine, Black IPA, Windsor Black, Jalapeno, Smoked Rye Pale Ale, Belgian Withier, Munich Dunkel Lager, Coffee Porter, Czech Noble Pilsner, and Irish Cream Coffee Ale. Then we went to Brews Brothers Taproom to play Mexican Train dominoes until we worked up an appetite again. Brews Brothers had the best beer selection in the town and seemed to be most popular with the college crowd from nearby Carbondale. 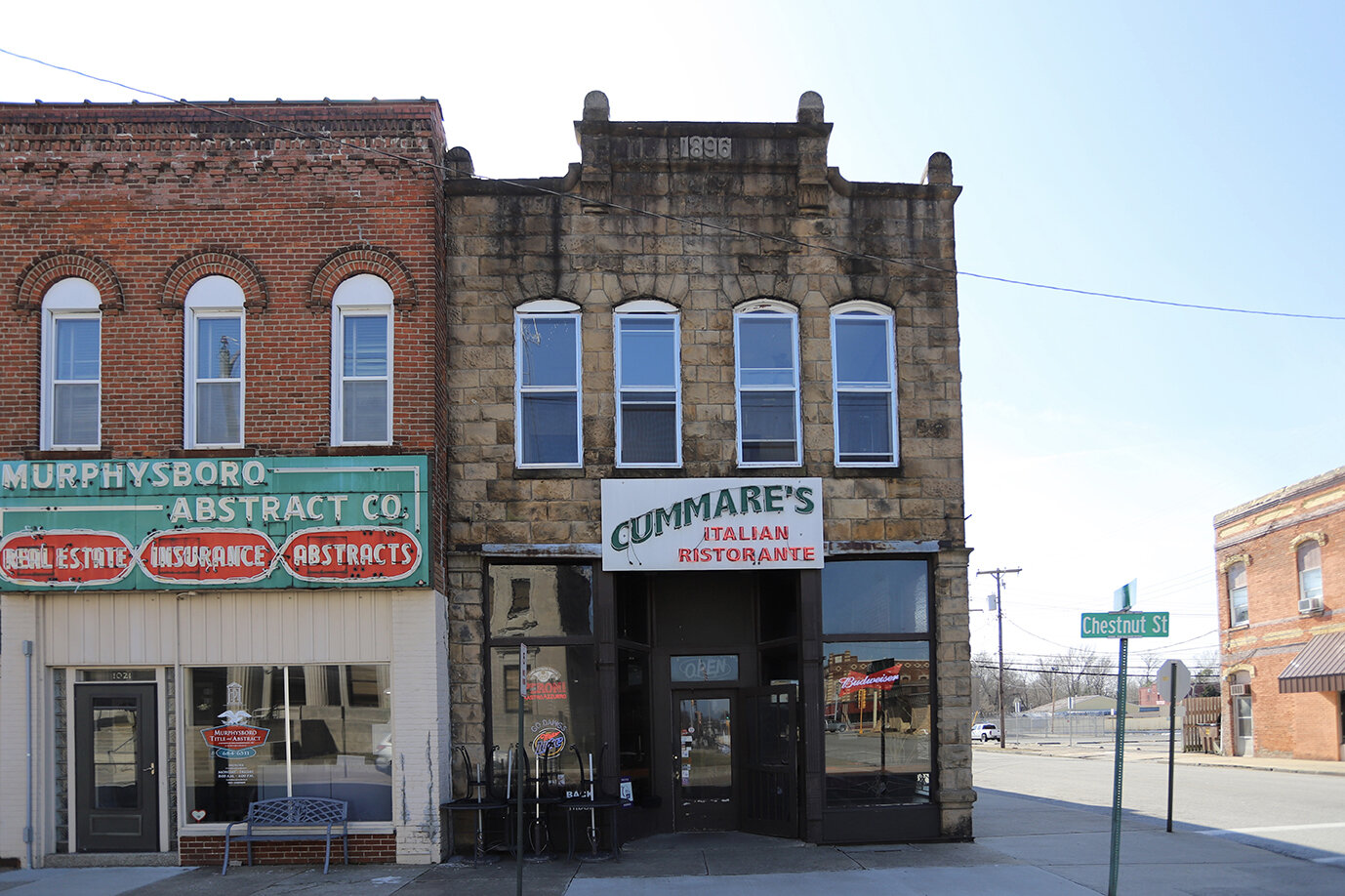 We closed out the night at Cummare’s, which was just next door and advertised handmade pasta and pizza. It was a cute and friendly place, probably the date-night restaurant of choice, but we were all a little spoiled by meals at places like Andrew Michael and Saint Leo in Oxford—not to mention Scratch—to be overly wowed by the food.

So, take it from me, if you decide to spend a night or two in southern Illinois, Murphysboro is the place to be. If you don’t want to stay the night, a day trip is doable too. Get on the road early, spend a few hours at Scratch—or get lots of bottles to go—and head back home before dark. It’s a nice drive, a lovely change of scenery, and an absolute must for beer lovers. 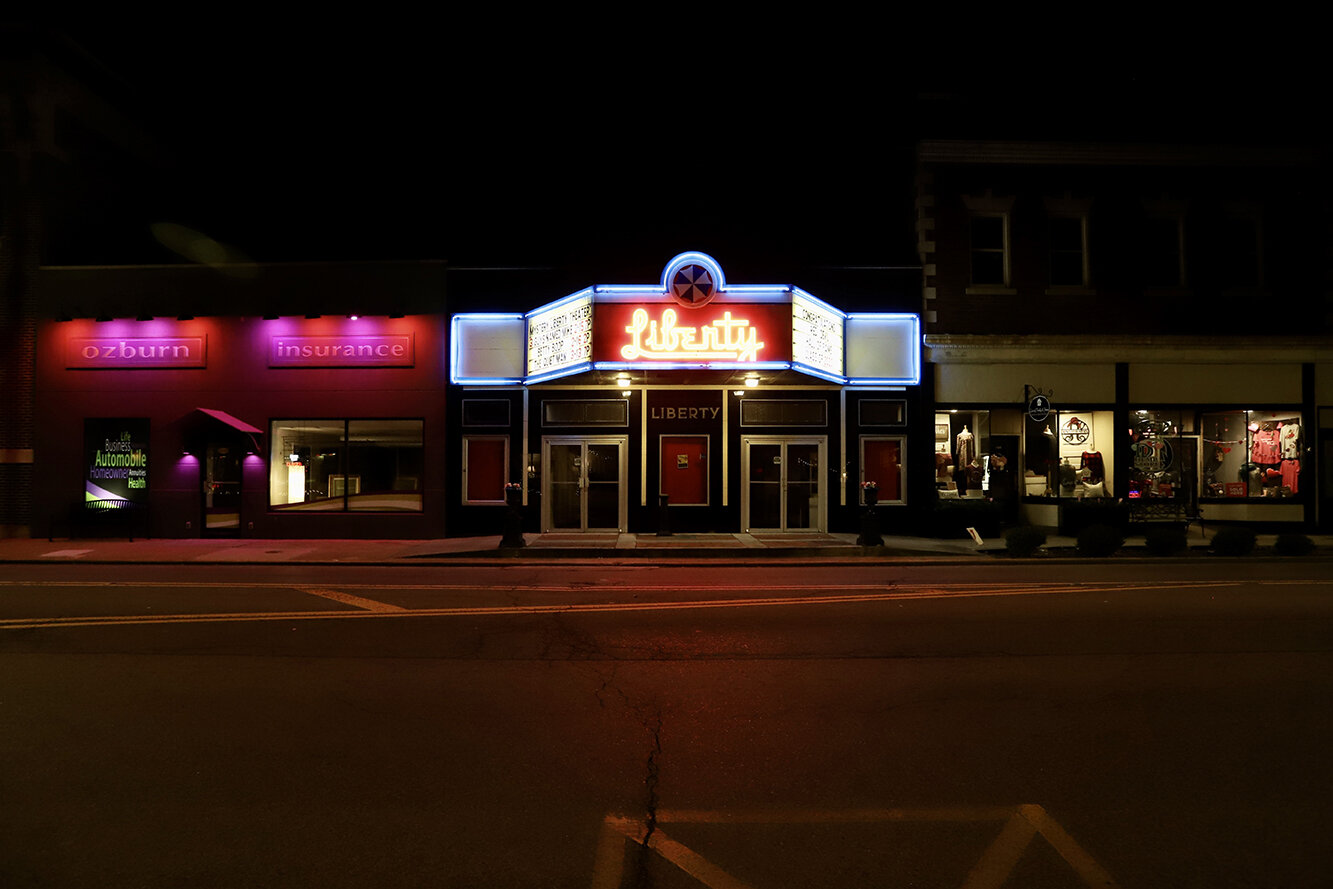 A place to lay your weary head:

Taking It to the Streets

Foraging and Farming for a Truly Local Beer