Four Hmong generations live and work together in Middleton, Tennessee 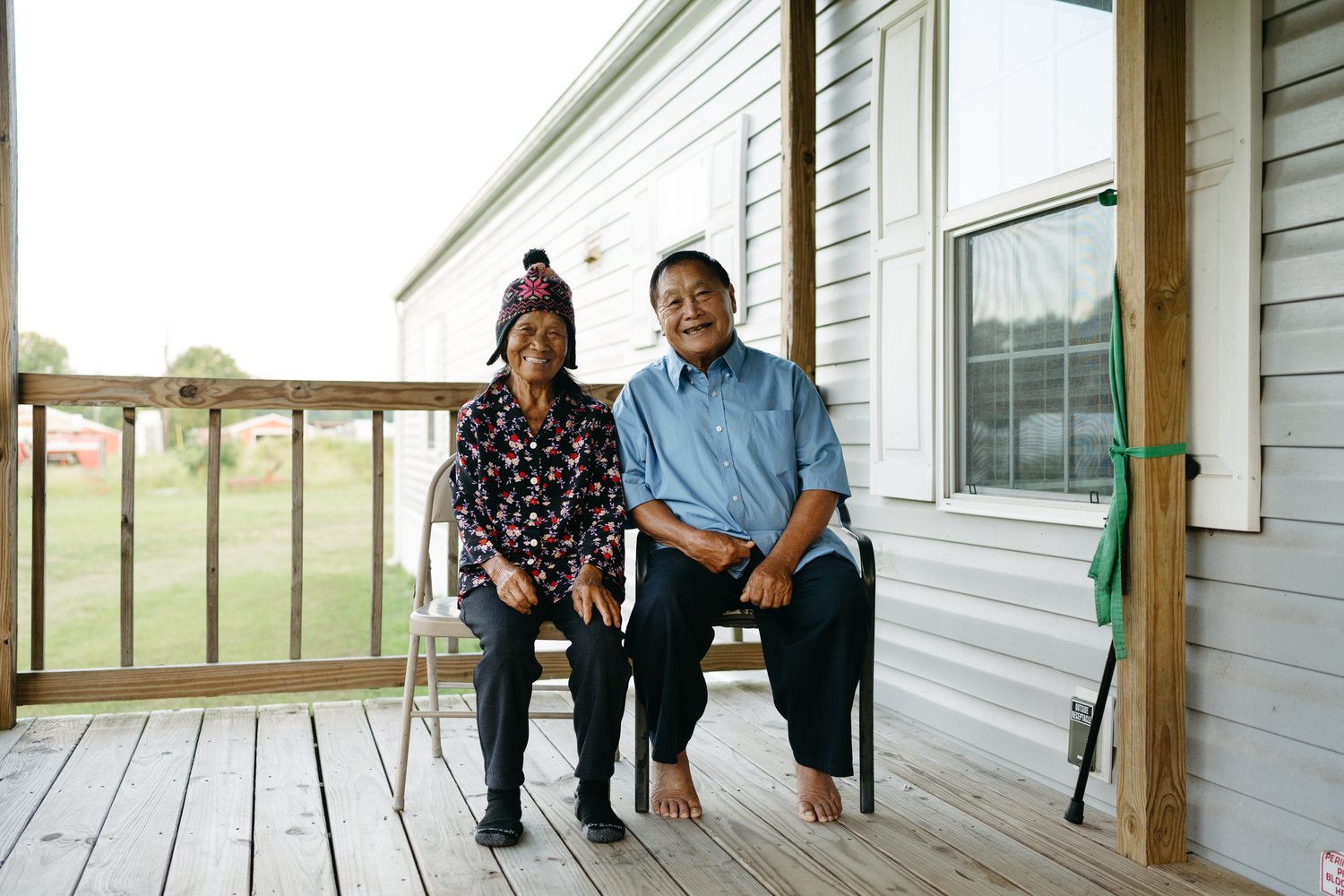 Nao Her Lor’s statements were translated from Hmong to English by his daughter-in-law, Maya Vue.

On a Tuesday morning in the middle of August, you can find 98-year-old Nao Her Lor doing what he’s been doing many mornings for almost 50 years—harvesting crops on his farm in Middleton, Tennessee. He works with his wife, Yia Cha, who’s 87 years old. The two married in 2021 after they each lost their first spouses.

Poke around the 53-acre Middleton farm—or the 52 acres they own in Grand Junction, Tennessee—and you might also find Nao Her’s four sons and their families in the field. Yia Lor, Chao Vue, Johnny Vue, and Zong Vue all live on the Middleton property with their wives and children. If they’re not on the farm, they’re likely selling their produce in Memphis at the Agricenter Farmers Market or the Memphis Farmers Market. 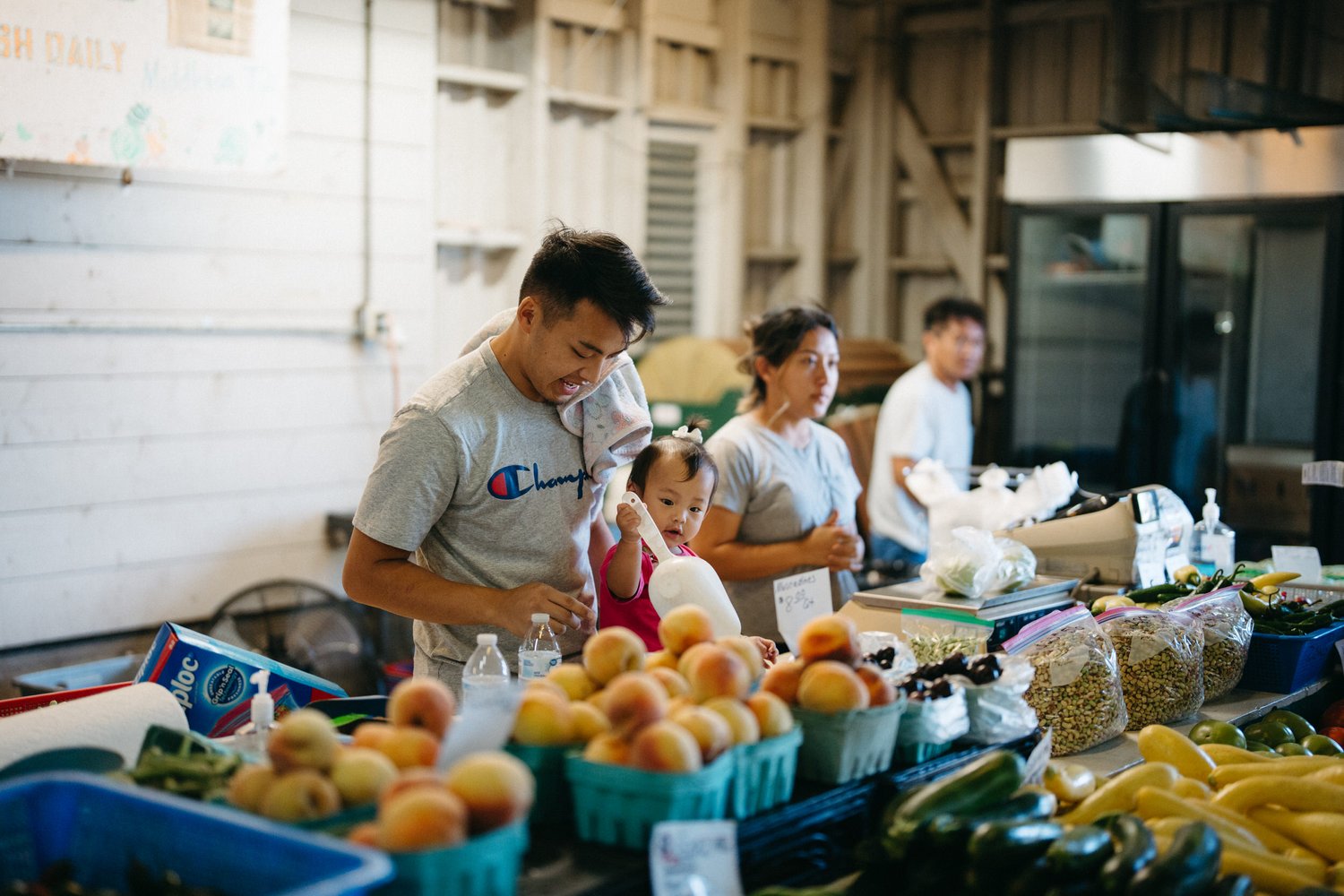 Nao Her and his family haven’t always lived in Middleton, though. His story starts in Laos, where he was born to farmer parents. As adults, Nao Her and his first wife, Khou Her, grew crops to feed their own family, but they weren’t farmers; they made their livelihood from pork. Nao Her raised hogs, butchered them, and sold them at market.

But then war came to his part of the world, and he was drafted into the military. Eventually he and his family were resettled as refugees in Memphis.

They rented a home and planted a garden in their yard. It wasn’t much, but it was enough to feed their family. But Nao Her worried about what would happen if their landlord sold the property or decided they couldn’t garden on it anymore. He knew he wouldn’t be able to afford enough groceries for his family with his minimum-wage job. And he believed the prospects of a higher-paying job were slim.

But one day the solution to his worries came through the classifieds. He saw an ad for 40 acres in Middleton, Tennessee. When he went to visit the property—which at the time was a cotton and soybean farm—he started dreaming. “I could buy this property and farm,” he thought. “Back in Laos I watched my parents farm, so I could do this for my family.”

So, three years after arriving in Memphis, Nao Her and his family moved to Middleton. They went with no jobs and no large-scale farming experience but with the belief that if Nao Her’s parents could support themselves in Laos through farming, Nao Her and family could do it in the United States.

The farming Nao Her had seen in Laos was done by hand—with no farming equipment or even livestock. But Nao Her had a different plan for his farm. When he drove through the country in Tennessee, he saw tractors and knew he wanted one. So he found someone who could teach him about tractors and—with his limited English—learned by repeating what his teacher did.

Nao Her and his wife intended to grow just to feed their own family. But they soon found that, with the help of their tractor, they harvested more food than their family needed.

They started selling produce from the back of a pickup truck in a church parking lot. And in 1985, they began driving to the Agricenter Farmers Market in Memphis—where you can still find them selling six days a week during the growing season.

Today they have five tractors, a pea picker, and a farm that supports four generations.

Each of Nao Her’s sons farms a certain part of the property with his own nuclear family; each family plants, harvests, sells, and lives off the profits from their work. Each family also sells under its own business name—like Lor’s Homegrown Produce and Yi’s Produce, both of which sell at the Agricenter.

Like Zong, Maya was born in Laos and lived there until her family resettled in the U.S. Maya’s parents kept a small garden, but they were city people in Denver, Colorado, and Maya never imagined she’d spend most of her life farming.

She says: “When we got married, my husband was like, ‘I love what my dad does. I want to do that too.’ So I said, ‘That’s fine. I’ll support you.’ So we started farming too.”

More than 30 years later, Maya hasn’t quite adjusted to some things—like the humidity and the mosquitoes. But she’s grown to love her life.

Now, even on hot summer days, she’s glad to be outside picking in the fields.

“Like they say, you do what you love and love what you do,” she says. 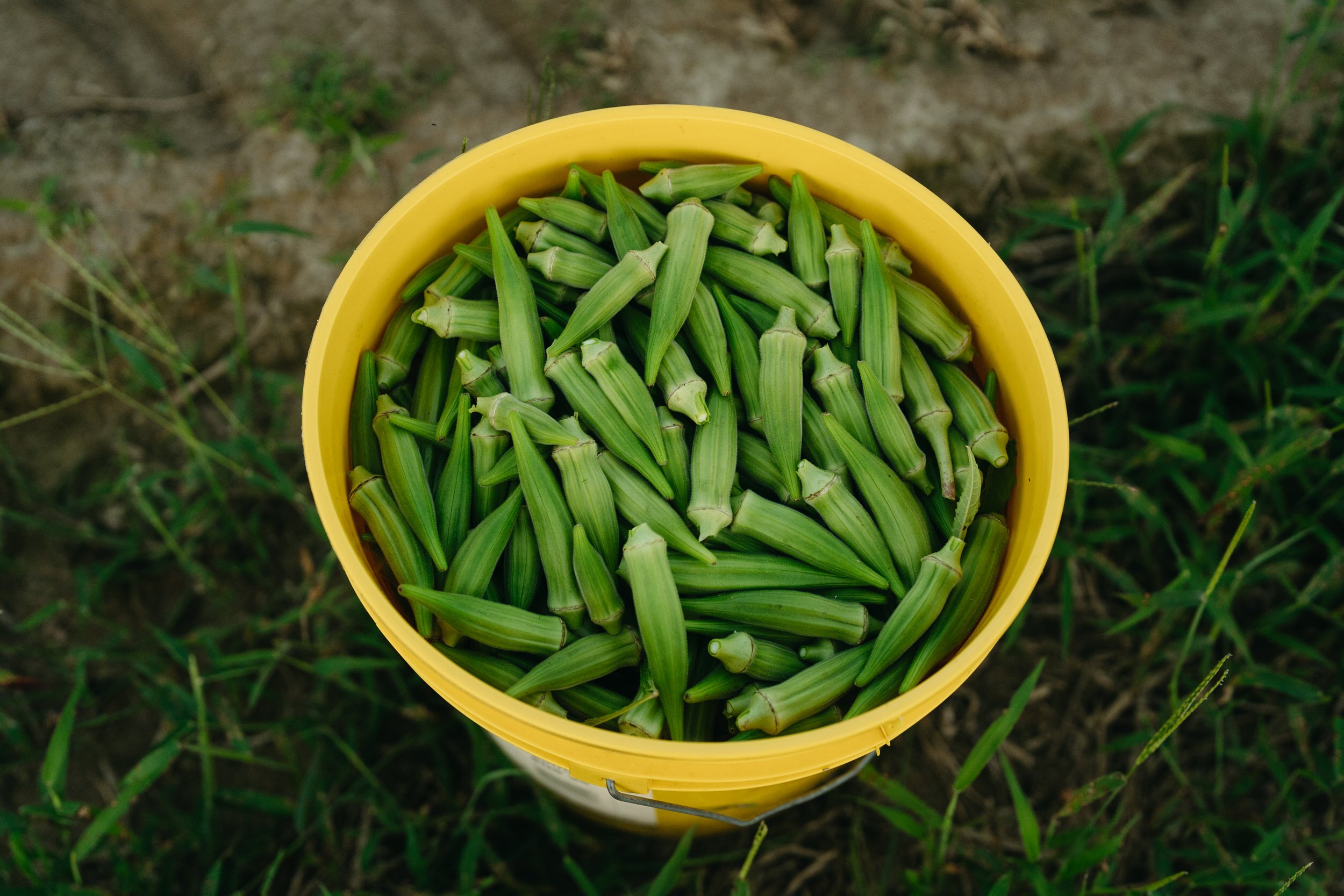 All of the family members are Hmong, an ethnic group that traditionally has lived in Vietnam, China, and Laos. Though their roots are in Laos, they think of themselves as Hmong, not Laotian.

When they first began selling at the Agricenter, they offered some Asian produce, like bitter melon, long beans, lemongrass, and Asian squash. But the customers just weren’t interested, so the family would toss excess produce back into the field for compost. They’ve continued growing Asian crops—but in small plots for their own families rather than to sell. Maya is starting to see some interest in Asian produce in some of her customers, though, as people have easier looks into other cultures online. But for now, the family is focusing on what the vast majority of their customers want—traditional Southern food.

“We cater to the South now—peas and beans and okra,” says Maya.

Sometimes they don’t have enough of one kind of produce to sell at the market. “If I’m short on yellow squash and have a whole bunch of peas, we’ll trade with another farmer,” says Maya. “It’s always local. They’re either in Mississippi or Alabama. We try to support local because we’re local.”

Like any parents, Maya and Zong feel the challenge of balancing work and family life, especially because work and family are so intertwined for them. During the school year, Maya stays close to home while her husband goes to the market; the commute is too long for them both to make it while also getting their kids to and from school. At night and on the weekends, you’ll find them at their kids’ athletic practices and games.

“It’s hard to balance your job with your kids, but you try to do both,” says Maya.

Their dinners often happen late at night after they all are in from the fields and home from the market and sports. Maya, Zong, and their oldest son prefer Hmong food while the younger kids like American flavors.

“I do a little bit of both,” says Maya. “I’ll put a twist on it. If I do pasta, I’ll put Asian seasoning in it instead of Parmesan. My kids are more Americanized; they’re more into mac and cheese and fried chicken.”

In the warmer months, it’s her daughters’ job to cut flowers when they get home from sports practice.

“One of my girls told me, ‘Mom, I didn’t choose this life. Why do I have to do this?’ I said, ‘You know, that pays for your phone, that pays for the shoes you’re wearing.’ They joke about it, but it still gets done,” she says.

Maya and Zong’s oldest son, Chason, has decided to follow in his parents’ farming footsteps. He grew up on the farm surrounded by his cousins, who lived on the same property.

“Growing up, it was quite an adventure,” he said. “All my cousins, we all lived together and always hung out. We all picked together when the sun was going down.”

As a child, he enjoyed the farm but didn’t picture himself spending his whole life there. After high school he spent two years studying software engineering at Jackson State University in Mississippi. “Then I realized sitting at a desk all day was not for me,” he said. “I like my freedom, and I enjoy family time.” 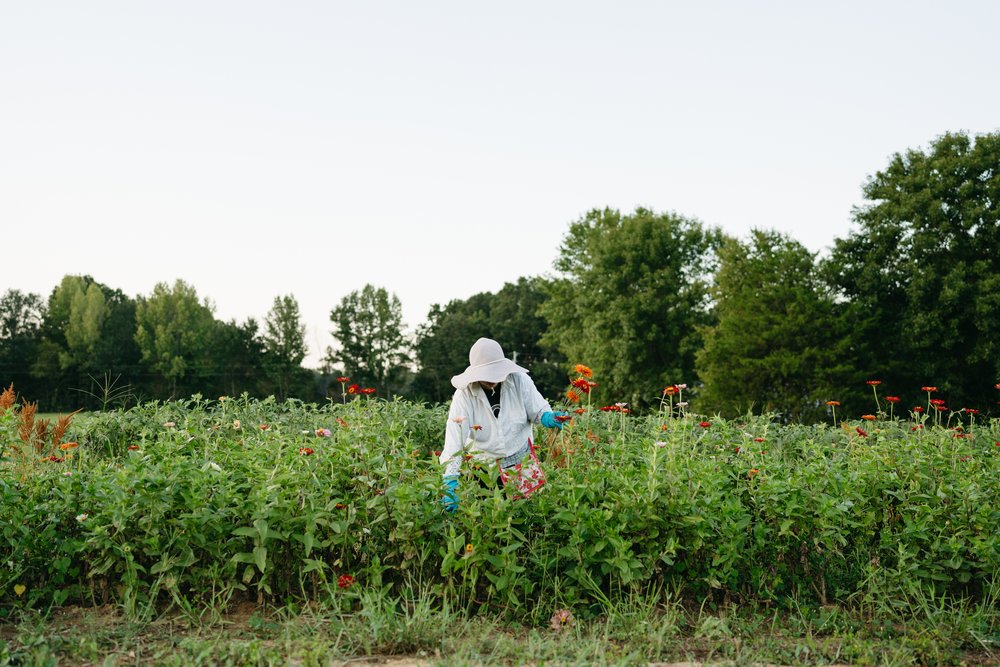 In 2020, Chason married his wife, Cara. Now they live with their young daughter on the farm and work the fields and sell with his parents. He even expanded the family business this year by selling at the Memphis Farmers Market in addition to the Agricenter. He plans to raise his family in Middleton and keep working the farm.

“We have our own land—so much land,” he says. “There’s a lot of freedom out there. It’s peaceful out there too. We have an abundant amount of food. And I get to work with my family. That’s a big thing for me.”

As his grandfather, Nao Her, is getting older, he’s sharing his accumulated knowledge with Chason.

“Last year I started learning more and more,” says Chason. “My grandfather started passing down how to take care of the land.”

For Nao Her, there’s nothing better than watching his children and grandchildren carry on the life that he and Khou Her built.

“I started with nothing,” Nao Her says. “All that we have now came from starting out with nothing but my bare hands. Now I’m a true farmer. My life is complete because all my family is here with me. None of my kids left me. They’re all on my property following in my footsteps. There’s nothing more. I’m happy.”

Manda Gibson is copy editor at Edible Memphis. She loves telling stories and helping other writers tell their stories.

Lucy Garrett is a British photographer based in Memphis. Her visual storytelling focuses on human rights, social justice, and environmental issues. She moved from London to Memphis for love, following her wife, but quickly fell in love with Memphis, sourdough baking, and her dog Juniper.