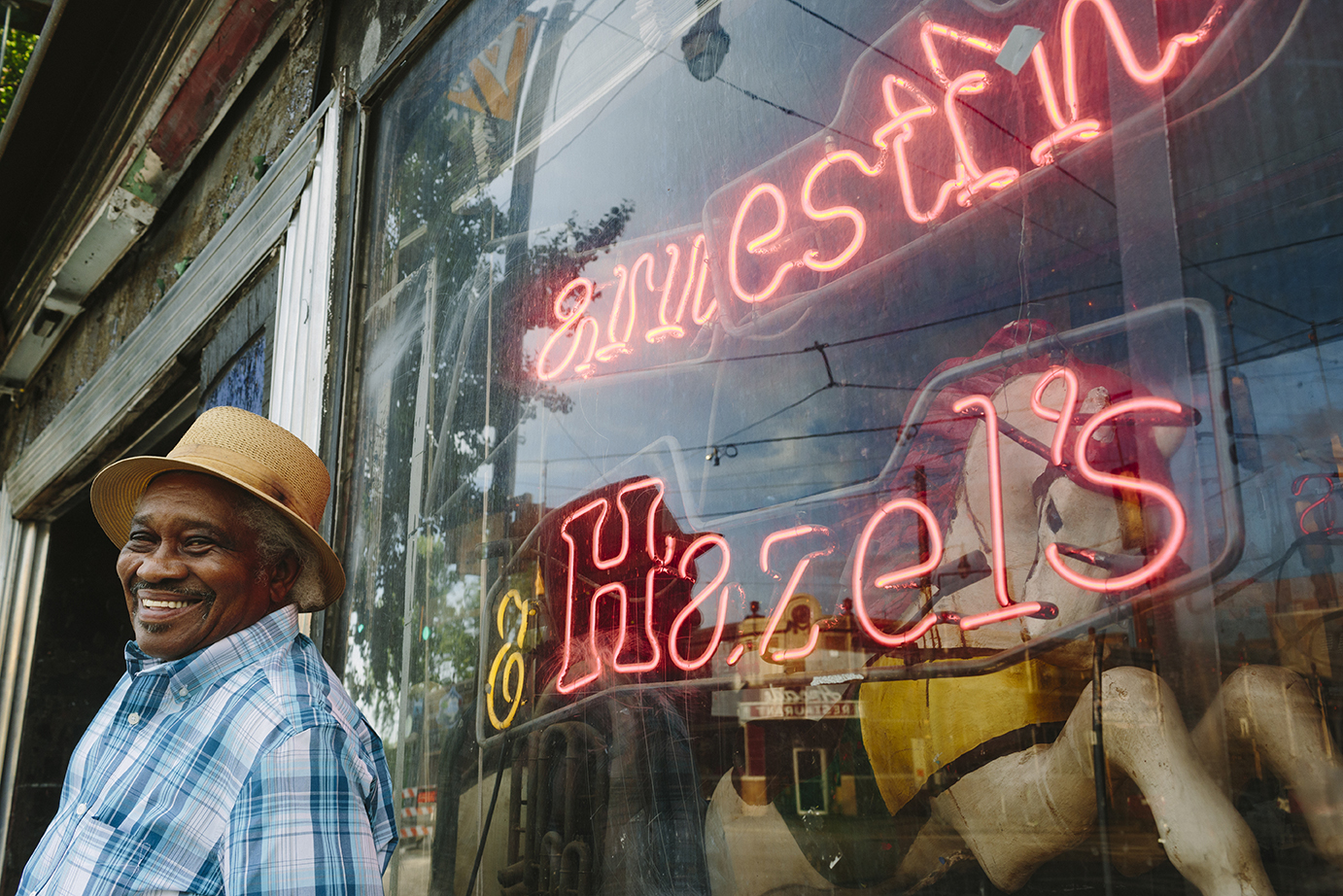 Nathaniel Barnes, 76, goes by Nate or Mr. Nate, and has the warmest smile I’ve ever seen.

After 27 years manning the upstairs bar at Earnestine & Hazel’s, he also has all the dirt that anyone would ever want to know—or not know—on one of our city’s oldest bars. I sat down with him recently to hear some of the nitty gritty as the sun was setting into his cozy, corner bar on the second floor. 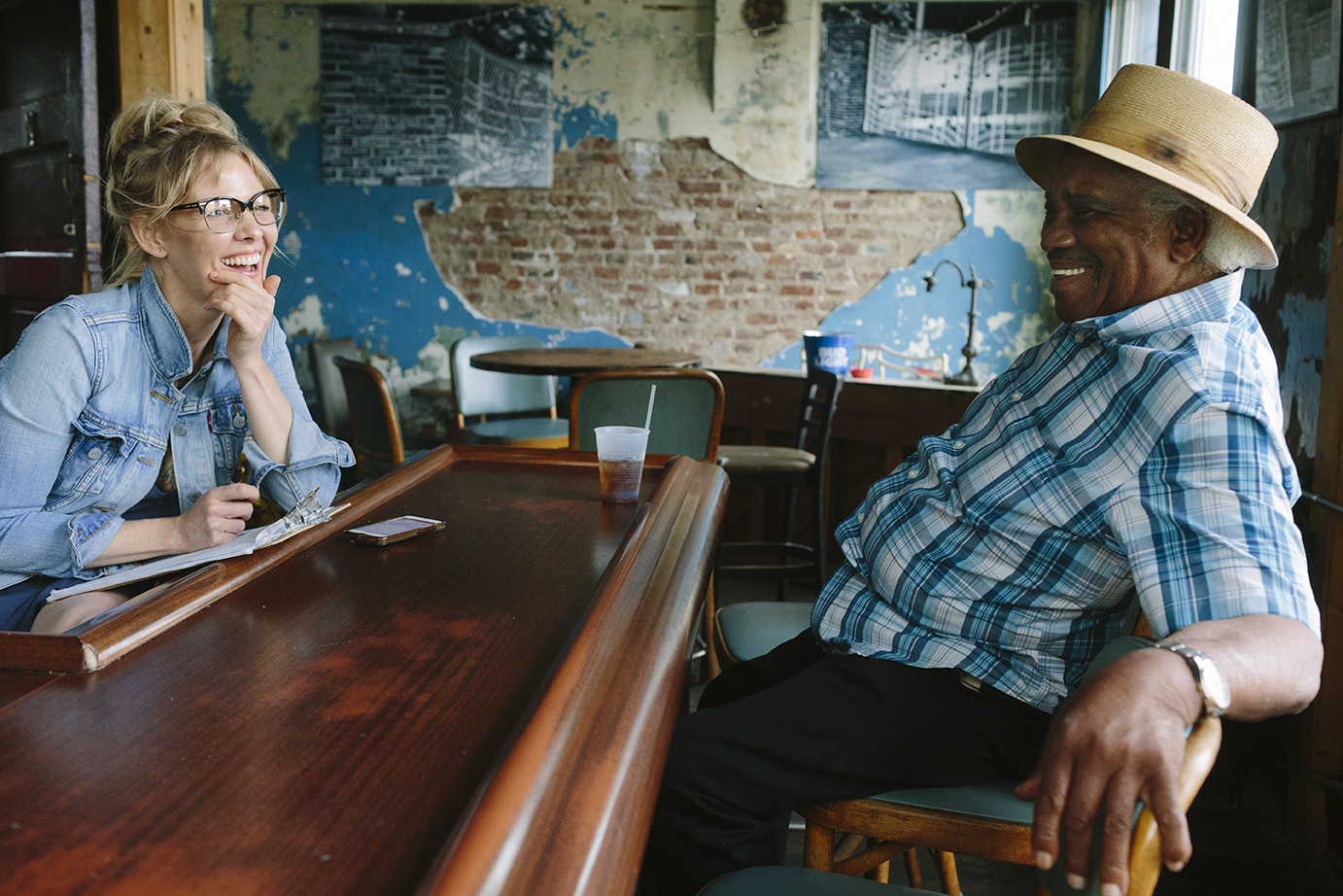 Though he’s a South Carolina native, Nate has been living in Memphis since 1962. He was 19 years old when he came to the Memphis area to visit his sister and brother-in-law, who were stationed at the Air Force base in Millington.

Nate’s story is like many “how I got to Memphis” stories: He was planning to visit his sister for only two weeks, but he’s still in Memphis 57 years later!

He got married three years after he moved to Memphis. “Still got my same wife—54 years [of marriage],” he says. Nate met Marilyn shortly after moving to Memphis, while helping a friend pick up a car in Mobile, Alabama. “[Marilyn] was on her way to work, and I saw her passing by,” he says. “You know, [I was] 19 years old—what do you think I was thinking?”

Nate knew the bar’s namesakes, Earnestine Mitchell and Hazel Jones—and it is safe to say that he was particularly familiar with Hazel.

Sometime before Marilyn, Nate and Hazel may have had a date or two. “We could never really get it together,” Nate says. “[Hazel] was Bobby ‘Blue’ Bland’s mistress at the time.”

In 1976 Nate started a job with Budweiser (and worked there for 34 years). That same year, Nate began working for Earnestine and Hazel’s future owner, Russell George, at Murphy’s in Midtown. Nate went on to work for Russell at Earnestine & Hazel’s in 1992 and has been there ever since.

For all of his career Nate has been around alcohol. “I used to drink. I used to drink a lot,” Nate emphasizes. “I quit Christmas ’85.”

He corrects himself: “Christmas Eve ’85.

“That’s the thing. I got drunk and went to sleep and I didn’t wake up ’til the day after Christmas.”

Laughing, Nate adds: “I never drank a drop after that.” 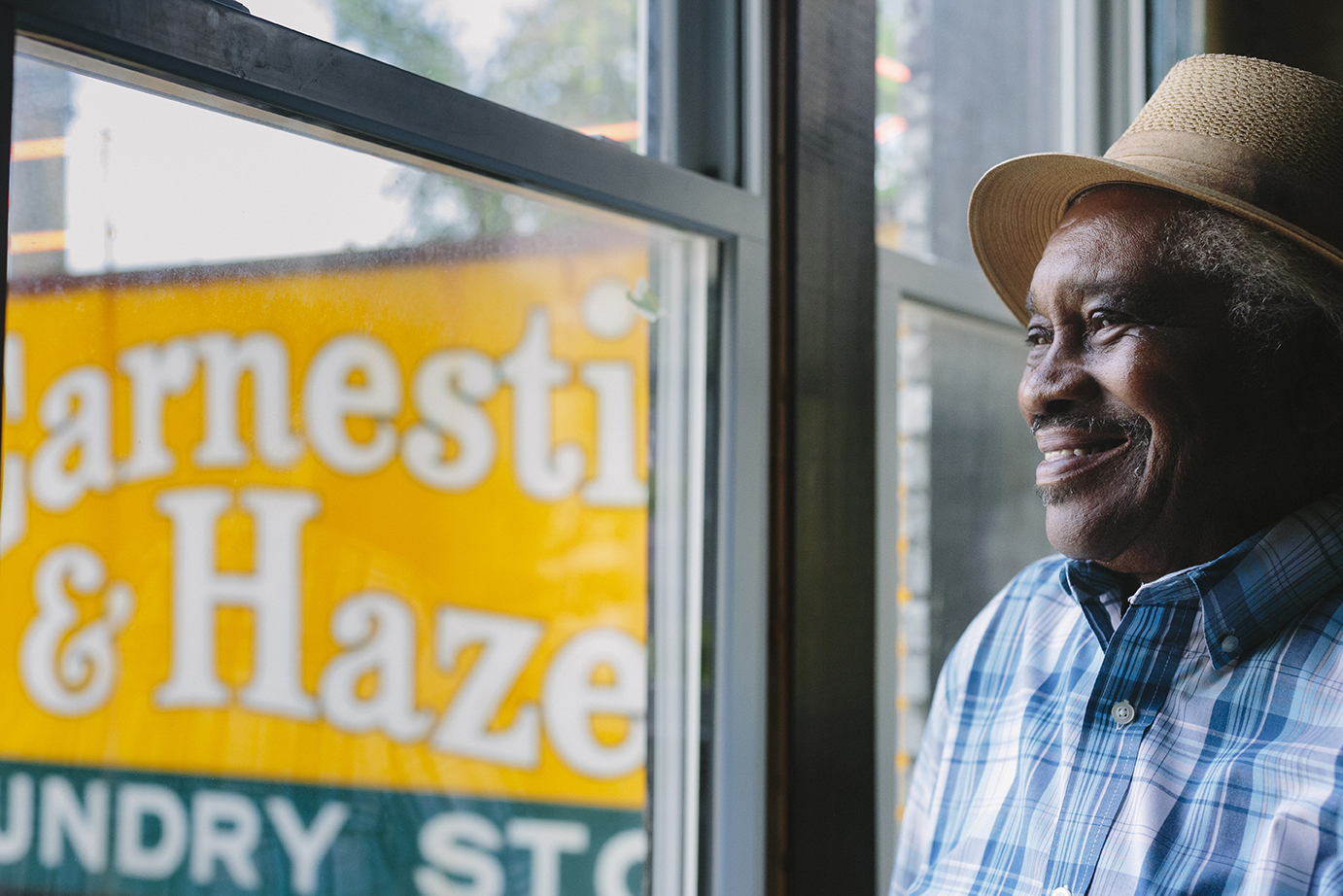 Although Nate loves all of his customers, alcohol sometimes changes people. “Sometimes people get out of hand. This is a place to come have fun. I think most of the time they know better, but the alcohol tells them something else,” he says. “I talk to [the customers] though. I calm them down—and then they are good.”

He has seen some unspeakable things in his day, and once had to remind a patron that while E&H may have once been a brothel upstairs, it isn’t any longer: “I said, ‘Man, we just can’t do this up here.’ I just couldn’t believe it. This is a public place! I said, ‘Lord have mercy.’” 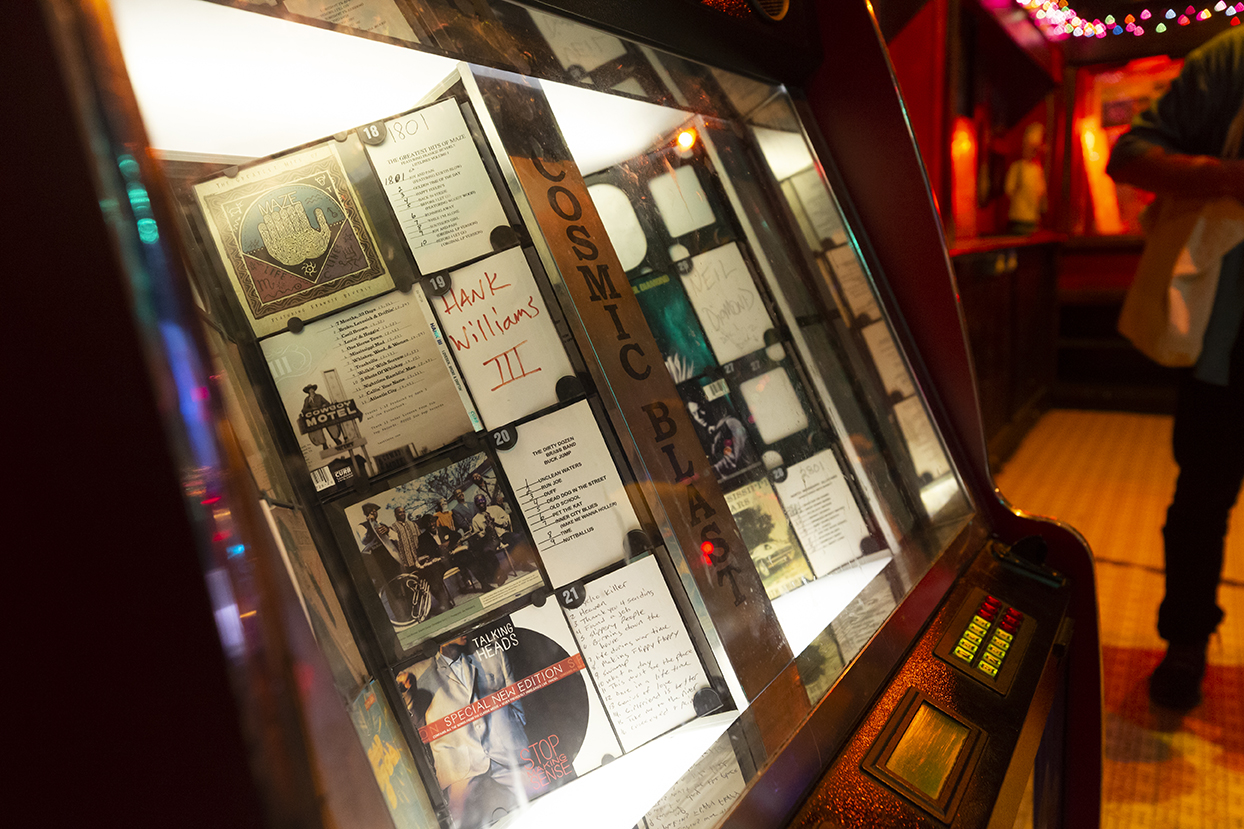 Nate has a reputation for being well-liked, and he says the secret to extreme likeability is simple: “The number one thing is you got to treat everybody right. Everybody comes out here [to the bar], and you gotta treat everybody right. In this business here, you can’t be no way funny at all. People ask me all the time, ‘How do you do it?”

And I tell them, ‘It’s easy when you’ve been doing it all your life.’ I try to keep that in me. I’ve been blessed. I still love it.”

On March 16, Earnestine & Hazel’s hosted a party to celebrate Nate’s 27th anniversary of working at the establishment. That same night, Nate’s son, Donnie, was murdered. Nate and his wife Marilyn had three children together, only one of which is still living. (He lost a daughter, Dorothy, in 2015.) I asked Nate if he would like to speak about Donnie’s death, or about how he has been dealing with the grief in the public eye. Smiling through a somber moment, he said that it wasn’t time yet to talk about his loss.

Changing the subject and getting back to the topic of his work, we talked about the happiest memories that Nate has of working at E&H. Soon, Nate was fondly talking about hosting the after-party of the the movie Get Shorty, all of the celebrities that he’s met, how short Danny DeVito is, and how he used to eat a few soul burgers a night back when former owner Russell George was still alive. “After all, this is a place to have fun,” he says.

When I asked Nate about that “Memphis thing”—the grit, the unnamed savory and complex quality that E&H is steeped in from the soul burger to the crooked staircase and the hospitality—he asserted:

Nate takes E&H’s hospitality seriously and loves talking to his customers. “Come buy a beer and talk to me,” he says with a big smile. “But don’t just talk to me and don’t buy no beer!”

For the foreseeable future Nate plans on being at the upstairs bar at E&H every Friday and Saturday. “I don’t plan on going anywhere,” he says. 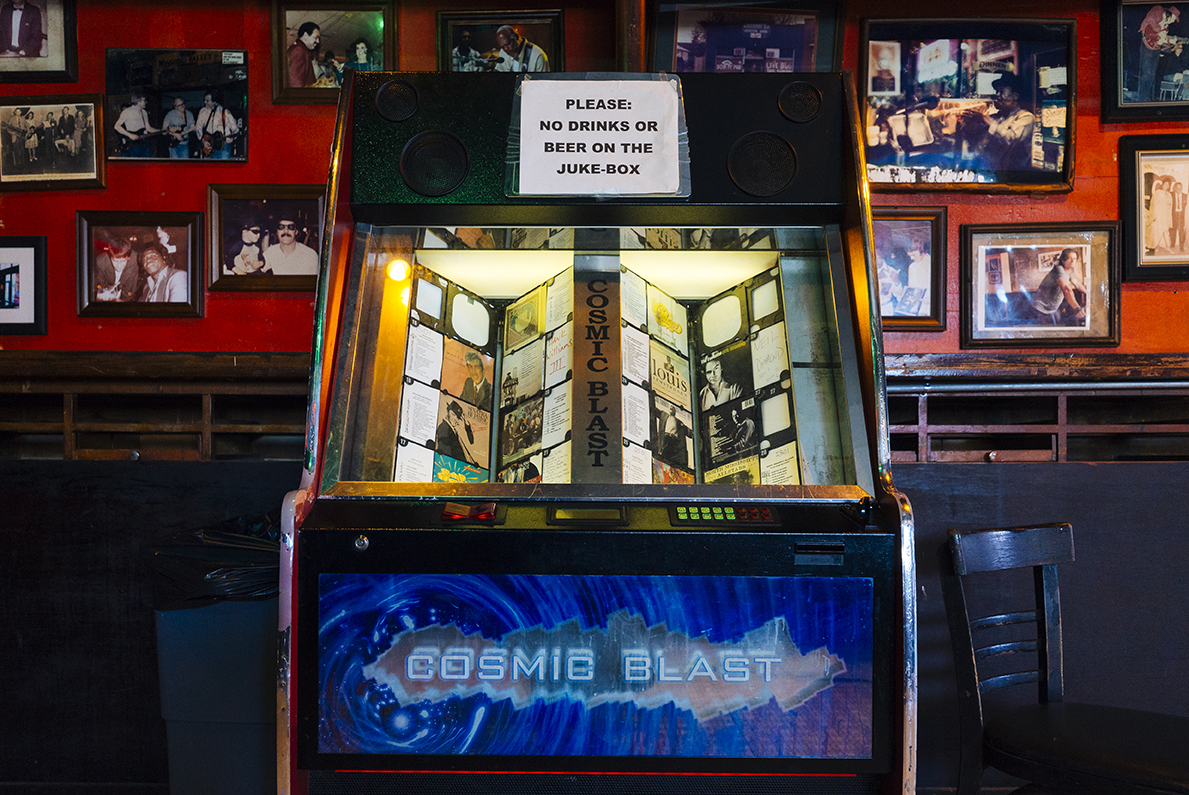 Jayne Ellen White has worked in the Memphis tourism industry for 11 years. She is a Memphis music history enthusiast and an adventurous home cook. She is the director of visitor experience at Stax Museum of American Soul Music.