0 0
There’s room for everyone at Helen’s 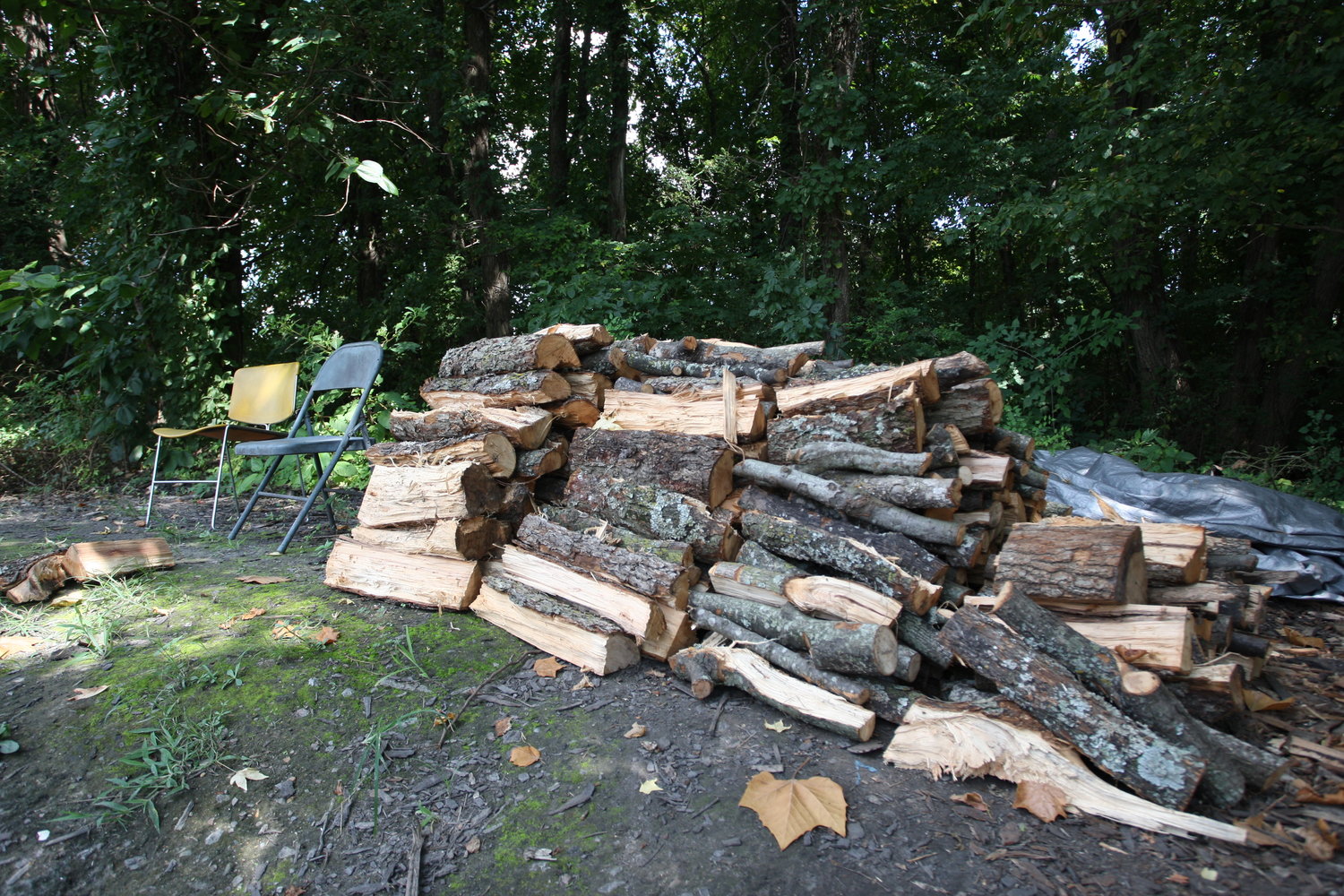 I enjoy a nice dose of “road therapy” from time to time.

So does Richard, my “whatever a 47-year-old woman is supposed to call the 50-year-old man she is dating when ‘boyfriend’ doesn’t quite sum it up.” On a sunny Saturday in August, we decided to drive out to Brownsville, Tennessee, to eat at Helen’s Bar-B-Q and walk through Billy Tripp’s Mindfield.

It’s literally a straight shot from Memphis to Brownsville. Since we planned to drive down Summer Avenue until it turned into Highway 64, then 70, Richard suggested we start downtown and drive the full length of North Parkway to Summer Avenue. (He really just wanted an excuse to get a coffee at Low Fi, which was fine by me.)

We got a late start – around 10:30 a.m. – and didn’t have any breakfast, so I was already hungry when we hit the road. I made it past Cozy Corner Restaurant, but by Mendenhall Road, I was eyeing taco trucks to see if they were open and saying things like, “Maybe we should get a couple of tacos to snack on?”

Driving through Bartlett, we saw several barbecue places I’d never heard of that sounded snack worthy. I called them out one by one (“Fat Larry’s!” “Baby Jack’s!” “Another Baby Jack’s!”), but Richard never took the bait. In Galloway, I tried again: “Look, Plumpy’s BBQ!”

I should probably mention here that Richard typically eats one meal a day. I can’t explain it.

When we got to Mason, which is about 45 miles from Memphis, I pulled into the original Gus’s World Famous Fried Chicken under the guise of getting a drink. Richard put his foot down. “We can’t eat fried chicken now,” he said with his most exasperated Southern twang.

I gave him my sad face and reminded him of how cranky I get when I’m hungry. He took a deep breath, looked across the street at Bozo’s Hot Pit Bar-B-Q’s neon sign and said, “I have always wanted to try Bozo’s. And I really want to take a picture of that sign.”

Ecstatic, I drove us across the street and made promises like, “We’ll just split a sandwich.”

Inside, Bozo’s was hopping. They’ve been serving barbecue since 1923, so they must be doing something right.

The waitress came to take our order, and having been given license to speak for the both of us, I went with a jumbo sandwich and a half slab of ribs with fries and beans. Then the waitress looked at Richard and said, “And what can I get for you?”

I had found my people.

The food came out after a short wait. The jumbo barbecue sandwich had delicious crunchy end bits in it. And the ribs! The ribs were incredible.

It wasn’t possible to eat just one, especially when there were three sauces to try.

The beans were just OK. We tried putting some meat that fell off of our sandwich into the beans to make them more exciting, but even that couldn’t do it. The fries were fries.

We noticed our neighbors eating a giant piece of chocolate explosion pie that had chunks of cheesecake in it, so naturally we ate one too.

Back in the car, we headed toward Brownsville, now just a short 21 miles away. Completely stuffed, we both knew we had screwed up. I had purposely worn my “eatin’ dress,” and Richard stated that he was really glad he had forgotten to put on his belt. “We’ll hang out in Brownsville awhile before we try and eat again,” I reassured him.

The stretch from Mason to Brownsville is my favorite. Not much traffic, nice open fields, cute little towns, and fun places where locals congregate to drink, like Kristie’s Tavern (the mascot is a beer-drinking parrot) and the Brownsville Moose Lodge. 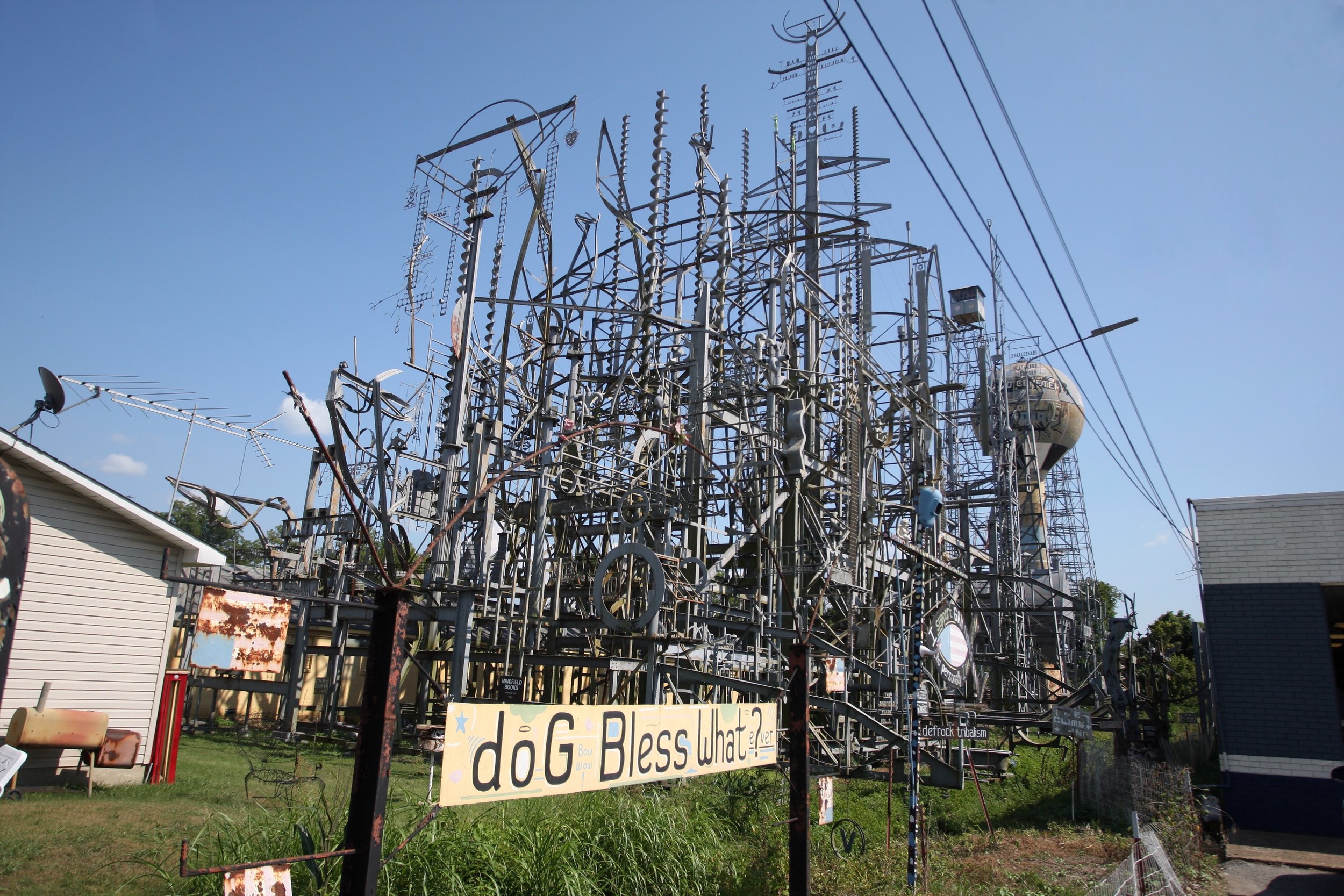 Once in town, we took a left on the main drag and headed a few short feet to the Mindfield. Nestled between a strip shopping center and a motel, the Mindfield is a man-made shrine of repurposed and scrap metal. (Think St. Louis’s City Museum meets small town Tennessee.) The creator, Billy Tripp, lives in the back of the property and has been adding to this massive sculpture since 1989. It’s about an acre in size and over 100 feet tall.

We hoped to find Mr. Tripp tinkering on the property, since he does most of his work in the summer, but he was nowhere in sight. I settled on writing him a note in his guest book just behind the barber shop while Richard took pictures.

Back in the car, we tooled around town, trying to piece together Brownsville’s story through the historic cemetery, old warehouses, town square and scenic neighborhoods. Then, by memory, I drove us to Helen’s. Helen Turner is one of only two female pit masters in the Mid-South. Smoke was coming out of the back, the parking lot was full of cars, and it was beckoning to us. 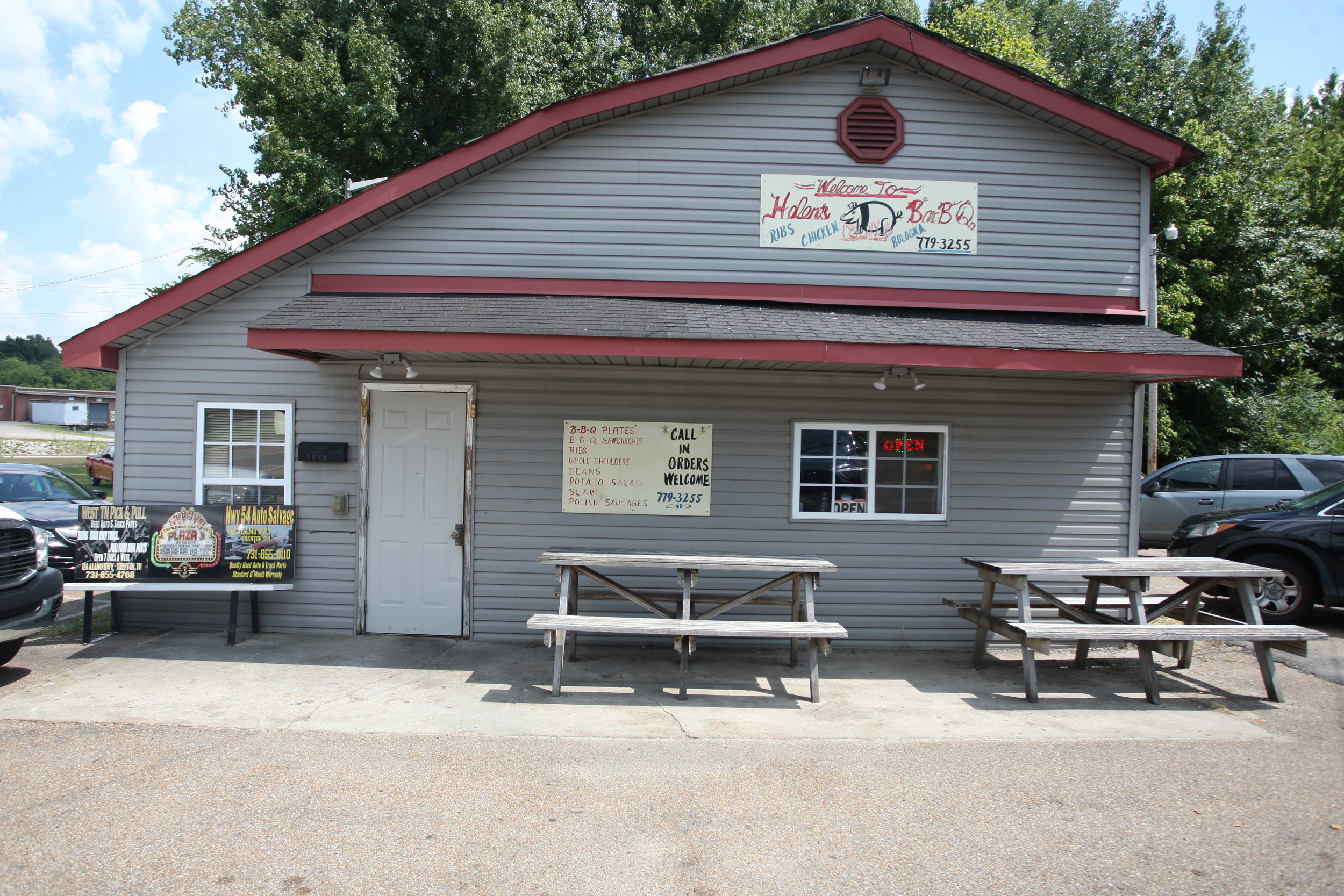 Inside, we discovered a table full of people in fancy barbecue logoed polo shirts circled around a giant order of nachos. They had note pads, iPhones, video cameras—you name it. They appeared to be trying to figure out a secret. The camera man went in and out of the kitchen and reported back on what he saw. Locals in line alternated from chatting with the crew to chatting with each other. One even asked me if I knew what was going on.

When I got to the window to place my order, the man taking orders was busy being interviewed, so Helen took a break from expertly chopping up a huge chunk of steaming hot pork and piling it on sandwich buns to walk over to take my order herself. “What’s going on?” I asked.

She smiled and waved her hand in the air, “Oh, these people? They’re with John T. Edge or Southern Living. I don’t know.”

[I later found out that some “barbecue experts” from Florida were taking James Beard winning author Adrian Miller (2013’s Soul Food: The Surprising Story of an American Cuisine, One Plate at a Time) to black-owned barbecue restaurants in Memphis and had made a special side trip to Brownsville to see Helen.]

I told her I, too, had come hoping to talk to her, and maybe take a few pictures. Completely unperturbed, she replied,

Come on back; there’s room for everyone.

Miller’s crew had more than made themselves at home, so I decided to wait it out, maybe try and catch more of Helen’s attention on another day. She asked what I wanted to eat, and I ordered one of those steaming hot sandwiches I saw her making and some ribs.

“Rib sandwich?” she asked.
“Half slab?” she followed when I looked confused.
“Yes, a half slab.”
Finally, she asked, “What kind of sauce?”
“Hot!”

I grabbed a couple of Diet Cokes out of the cooler, and she totaled the order to $21. A few moments later, she handed me the food. 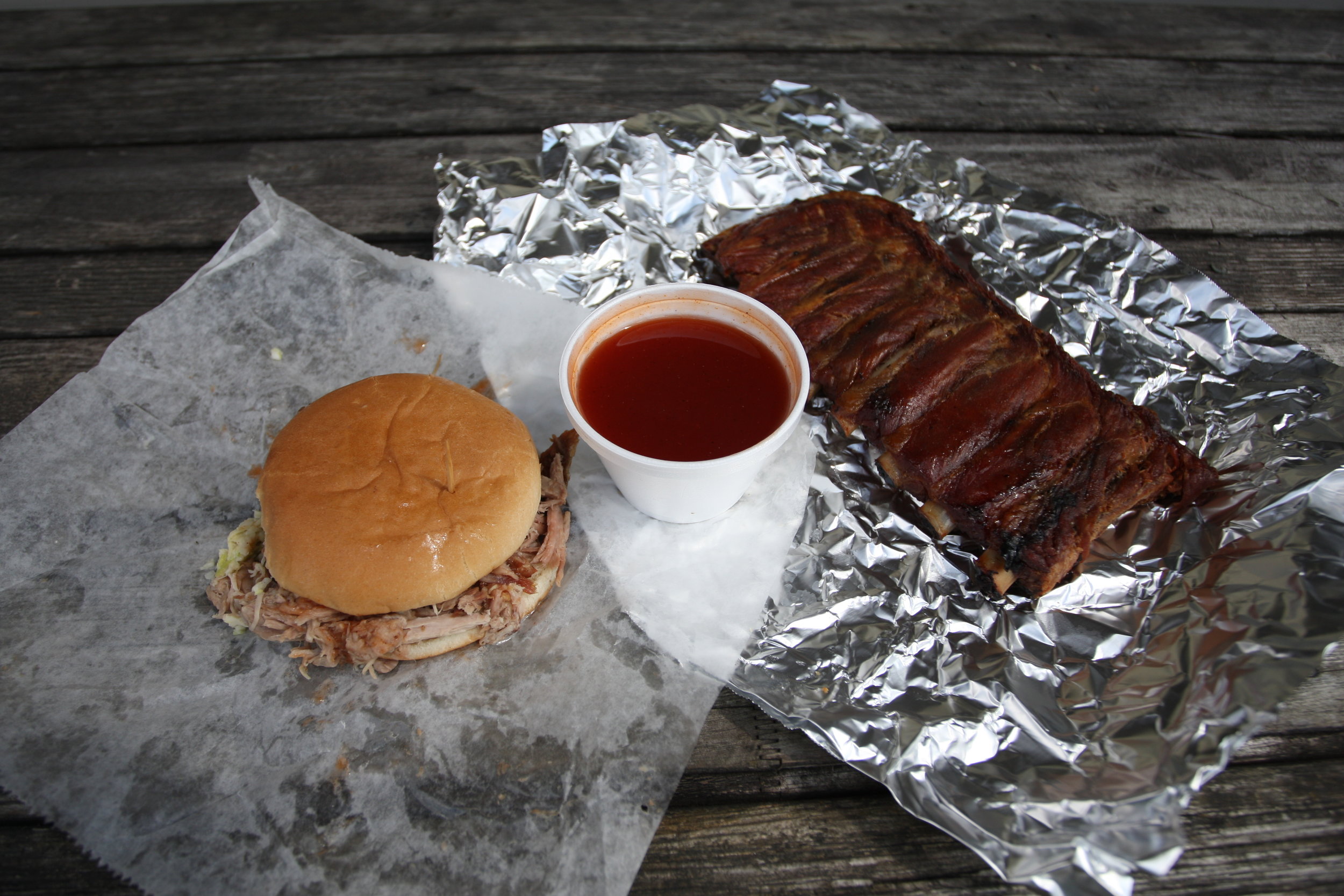 I joined Richard outside by the picnic tables, and he excitedly told me about the former NFL player/local he’d been talking to about the power of food to bring people together.

You just never know who you’re going to run into at Helen’s.

Now, about that rib sandwich she mentioned—the rib ends are nice and crispy, but the meat is so tender that it practically comes off in one bite, and then the bone slides right out. So, people really do eat ribs on a sandwich at Helen’s, just a little carefully I suppose.

As we made our way out of town, we had a decision to make—hightail it back on I-40 or take the long way home. We still had plenty of daylight, so we chose the long way.

And, yes, we stopped at Gus’s.

Richard Lawrence takes pictures in and around the city of Memphis and the Mid-South. You can find him on Instagram @sundayinmemphis.

The Art of Pasta

Our Soi - Your Street