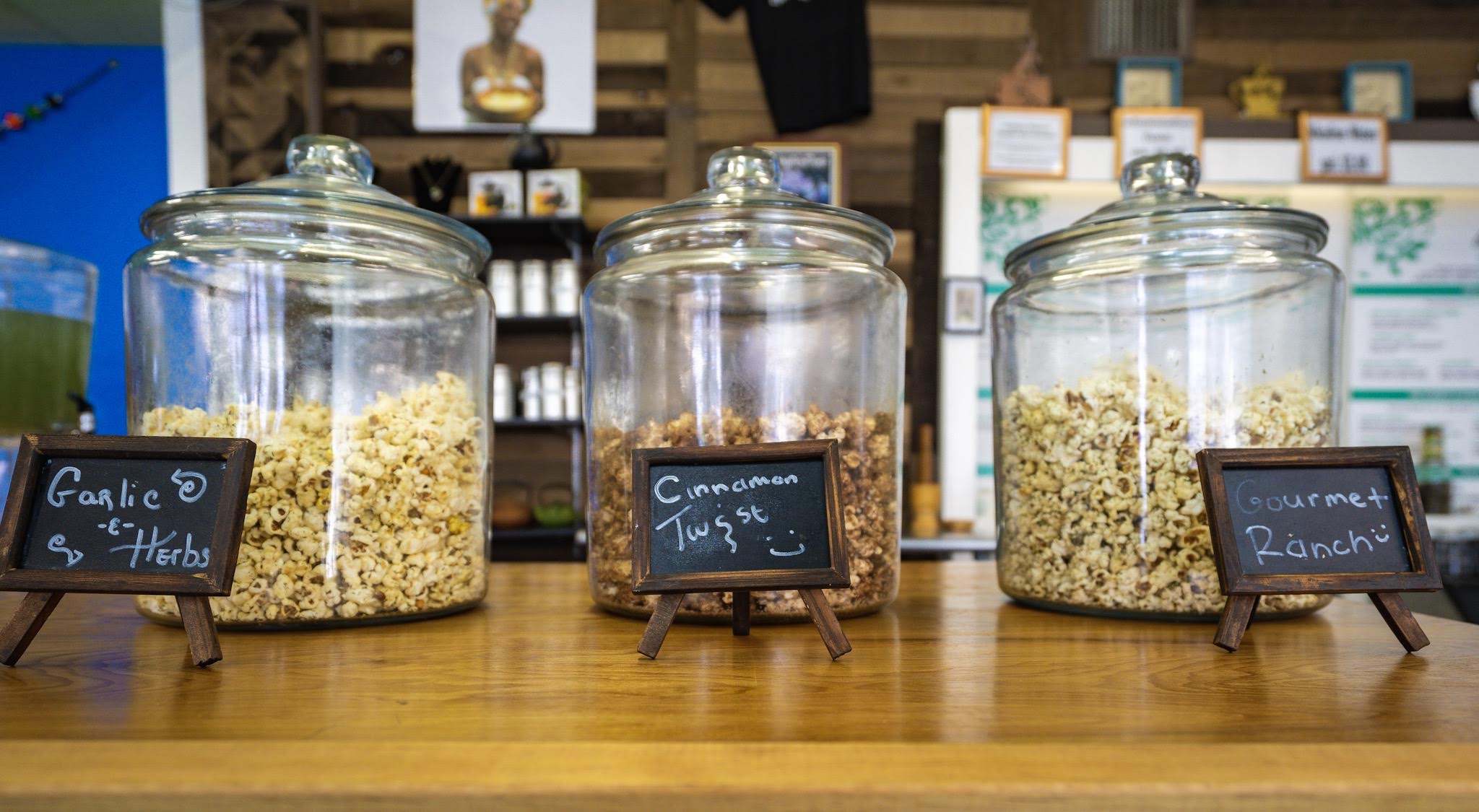 Omi believes sacrifice, whether of time or money, is a huge part of owning a business. She sees her business as an extension of who she is—a vegan for over two decades and a mother of six children who eat plant-based diets.

It’s been a wild ride since starting Green Goddess 10 years ago and then the lounge in the spring of 2018, she says.

“Don’t get me wrong—if you turn your passion into a business, you’re never really working,” she says.

“Cooking healthy food is my passion, and the lounge is my home away from home, for both myself and my family. This manifests the motivation and work ethic I’ve developed. Honestly, I grow tired of work but never weary.”

Omi founded Green Goddess back in 2008 with her signature superfood popcorn. The vegan chef worked at Wild Oats (now Whole Foods) and wanted to provide the everyday person with accessible vegan products. She quickly expanded to stocking her popcorn regionally in Whole Foods stores.

If you’re unfamiliar with the food biz, snagging multiple Whole Foods accounts is not an easy feat and says quite a bit about the quality of Omi’s products. Basically, her popcorn is rocking the highest-quality ingredients. What’s more, Green Goddess was one of the very first vendors at the Memphis Farmers Market, Cooper-Young Community Farmers Market and the (now defunct) farmers market at Memphis Botanic Garden.

Omi comes from a lineage of female entrepreneurship and always knew she wanted to have a business. Her mother would often tell her, “You can be anything—a pediatrician, a midwife, whatever—but no matter what you do, pursue your passions and interests.”

Her purpose isn’t just to make a profit.

“I chose Green Goddess and its branding to align with my mission to teach the community to respect women and Mother Earth, both in which all life comes from,” declares Omi.

These values are evident in Omi’s actions. In a time of the #MeToo movement gaining traction in the food industry, she is a b female pioneer in the Memphis area. Her business is set to extend into the nonprofit world with Green Goddess Global. The mission is to establish programs for victims of domestic violence, substance abuse and sex trafficking. The classes will teach these women entrepreneurial skills to rebuild their confidence and independence.

A natural mentor and counselor, Omi shares advice for those looking to become entrepreneurs: A major downfall of new business owners is they don’t realize the importance of listening to their customers’ demands.

“This seems simple, but when you start a business from passion, you sometimes forget your role isn’t just to 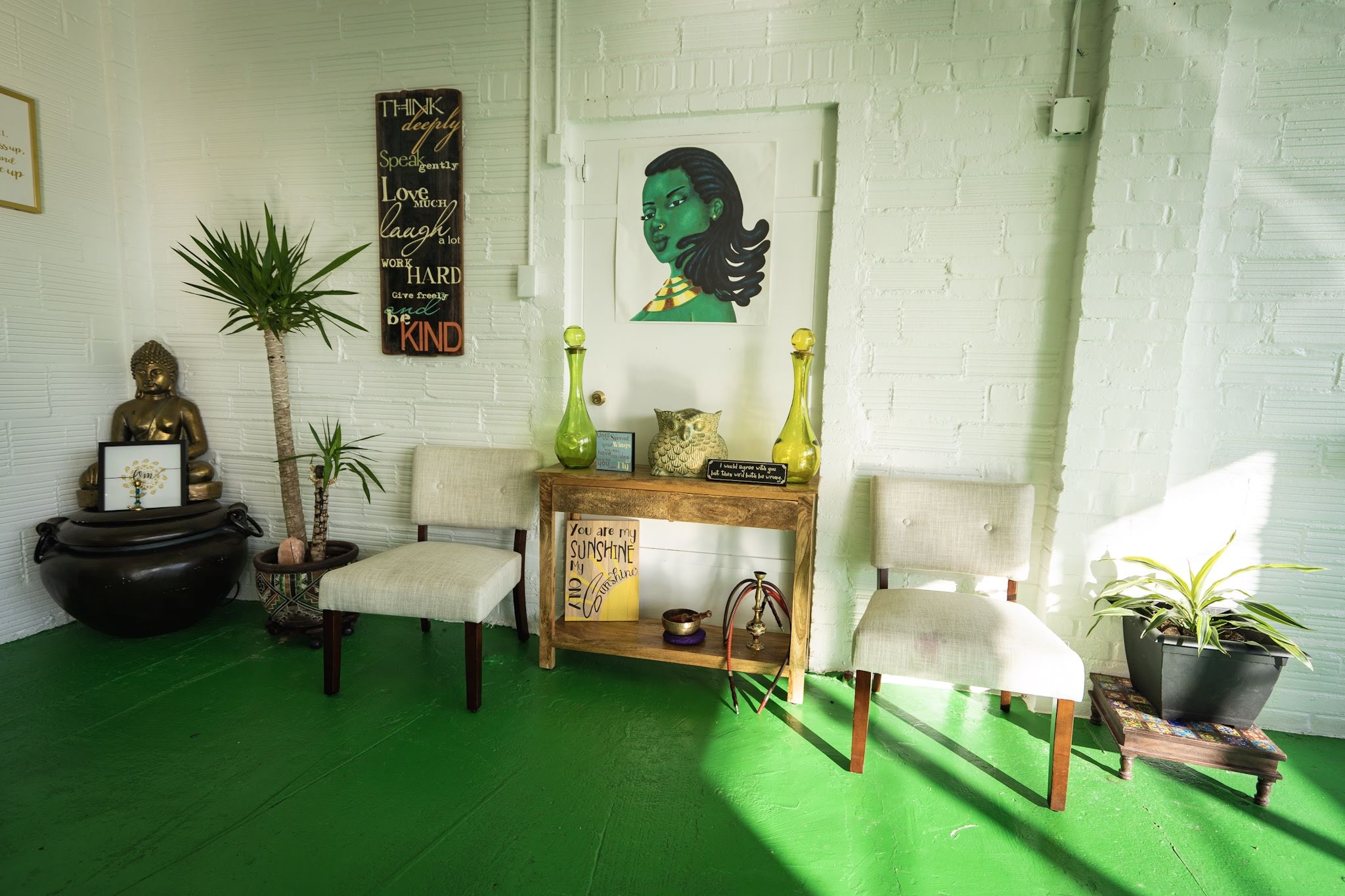 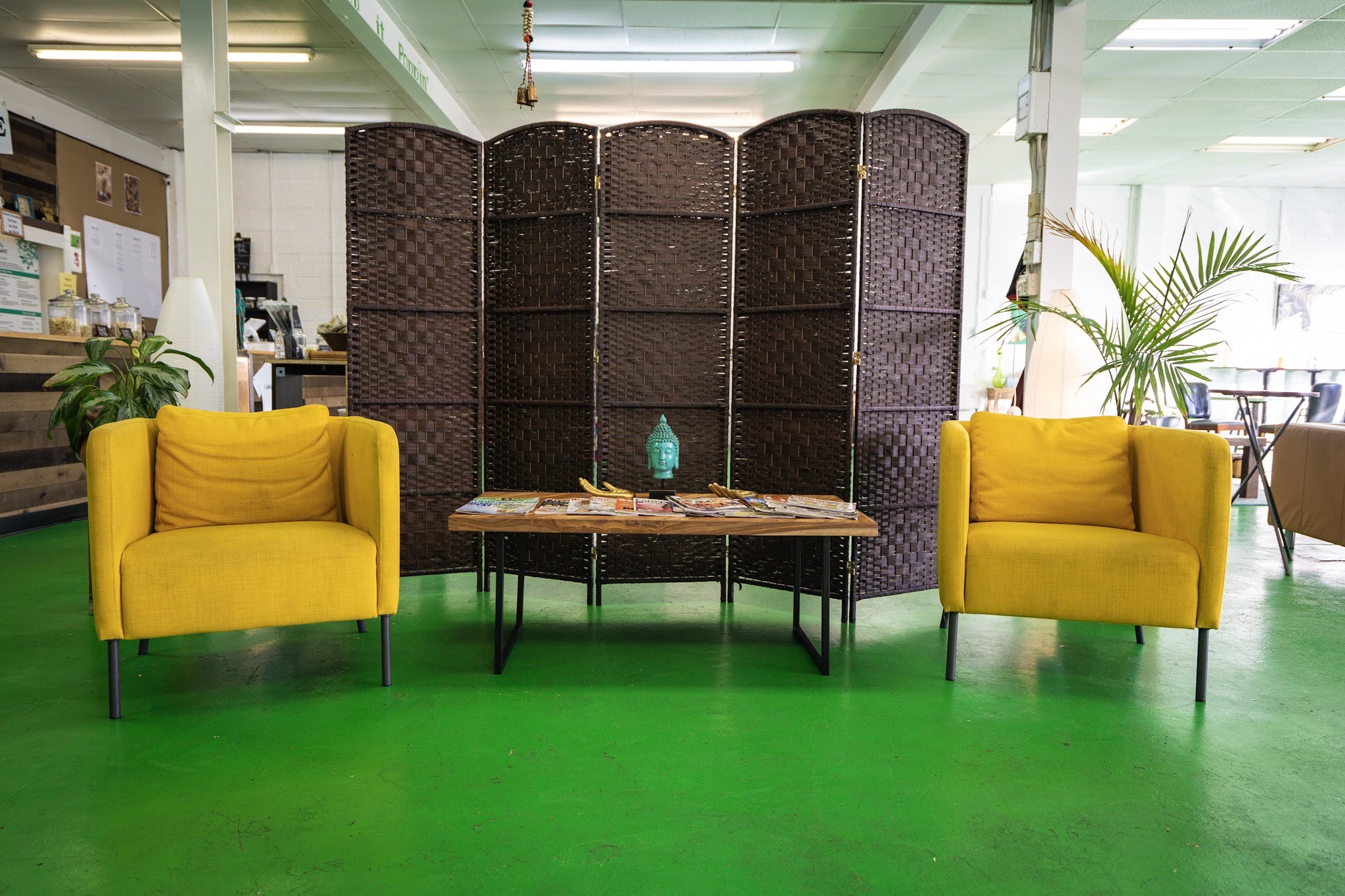 She uses herself as an example. “When I opened the lounge in the spring, I didn’t plan to be in the kitchen. I thought that would happen much, much later,” she says. The lounge originally served her vegan popcorn and pastries; however, Omi’s loyal customer base followed her from her vegan chef days.

“Time and time again, customers asked when I would start cooking the food they know and love,” she says.

As a response, Omi now features a curated menu on Fridays and Saturdays, starting every weekend with Vegan Pizza Friday. When I went to lunch on a Friday, several customers stopped me as I walked up to the register and urged, “Get the pizza; it’s amazing!”

Just as with every dish, her pizza is made from scratch featuring artistically seasoned, grain-based meats and tofu. She also features classic comfort foods like mac and cheese, shepherd’s pie and lasagna. 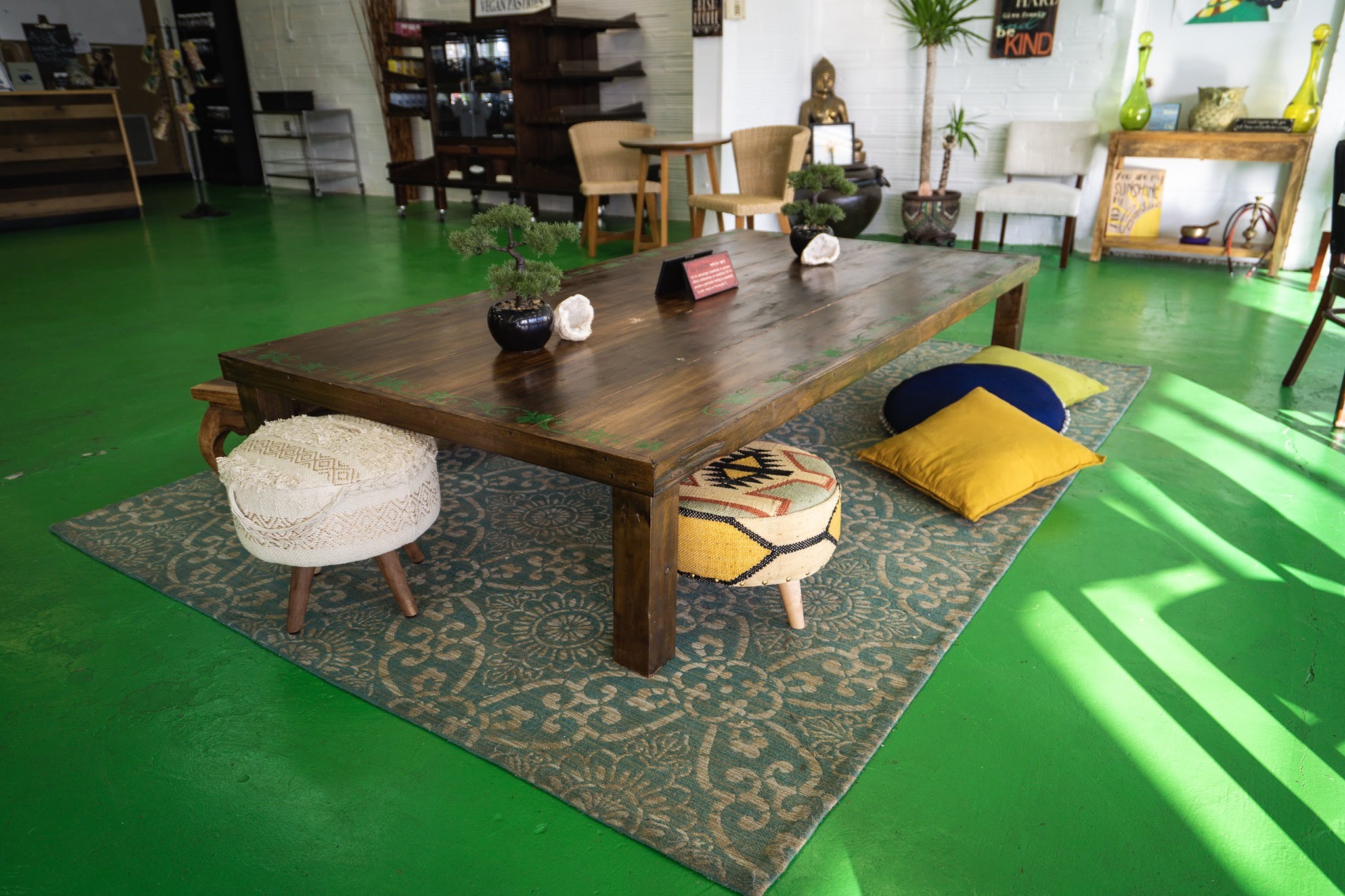 The lounge also is available for special events. In September and October, she hosted Food Drank Culture’s Paint and Get Lit night, featuring local artist David Yancy III. The lounge, with many attendees strangers to each other,  was filled with joyful chatter as guests painted their own masterpieces. Nothing gets the creative juices flowing like munching on Green Goddess popcorn, feeling the warmth of the cayenne, and sipping on a cool wine spritzer garnished with aged maraschino cherries.

The future of Green Goddess is bright. Omi’s plans include buying a manufacturing warehouse, publishing a cookbook, branching into the nonprofit sector, and exploring the possibility of franchising.

“Green Goddess is going to be the black Starbucks,” she says. 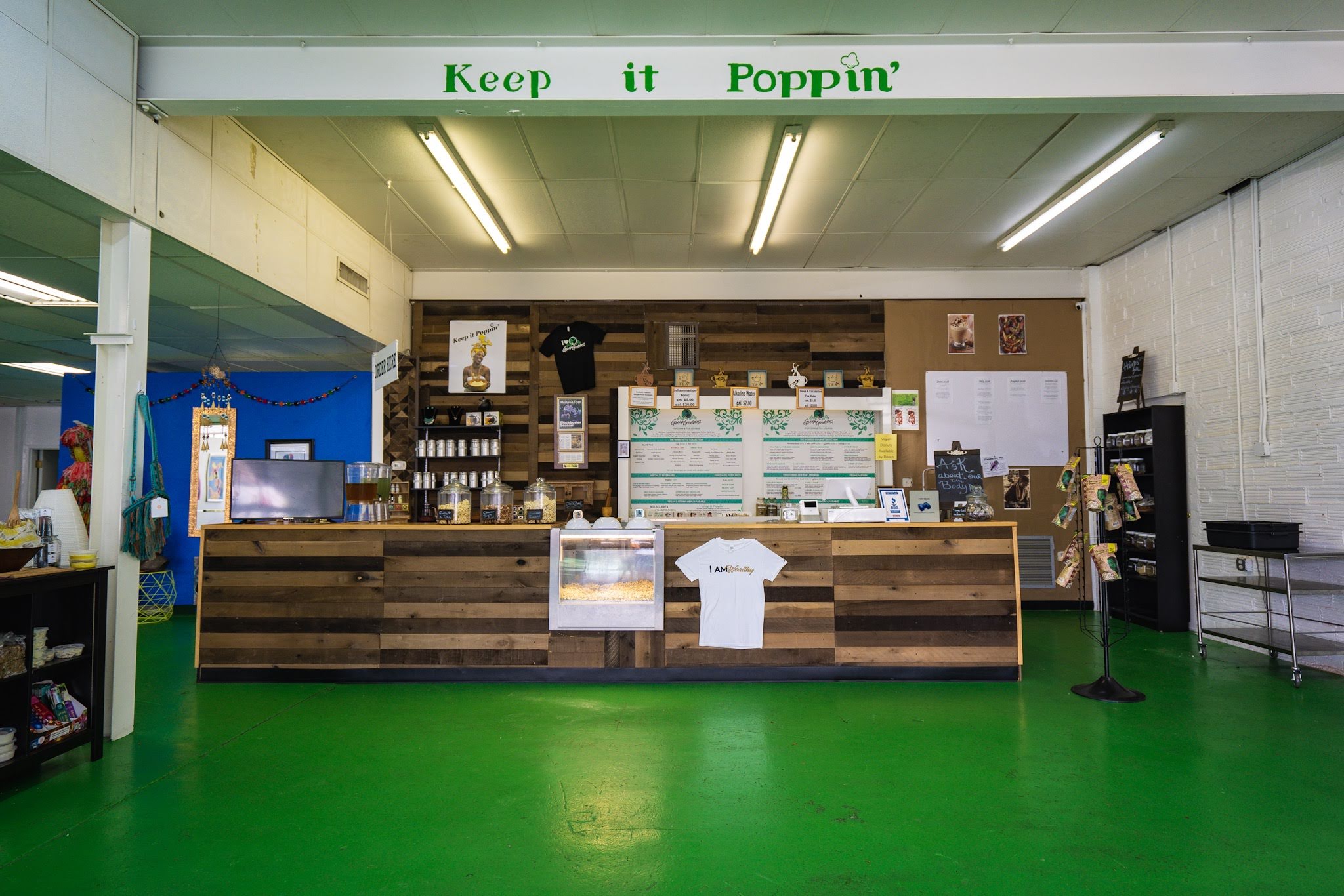 Alexandra Reed wants you to know one thing—she’s a registered dietitian, not a food cop. She has written and presented for several companies, including Girlboss Media, Cherry Bombe, Teach for America, Ignite Memphis and Thinx. You can email coupons and compliments to notafoodcop@gmail.com.

Tim, Lena and the Edge