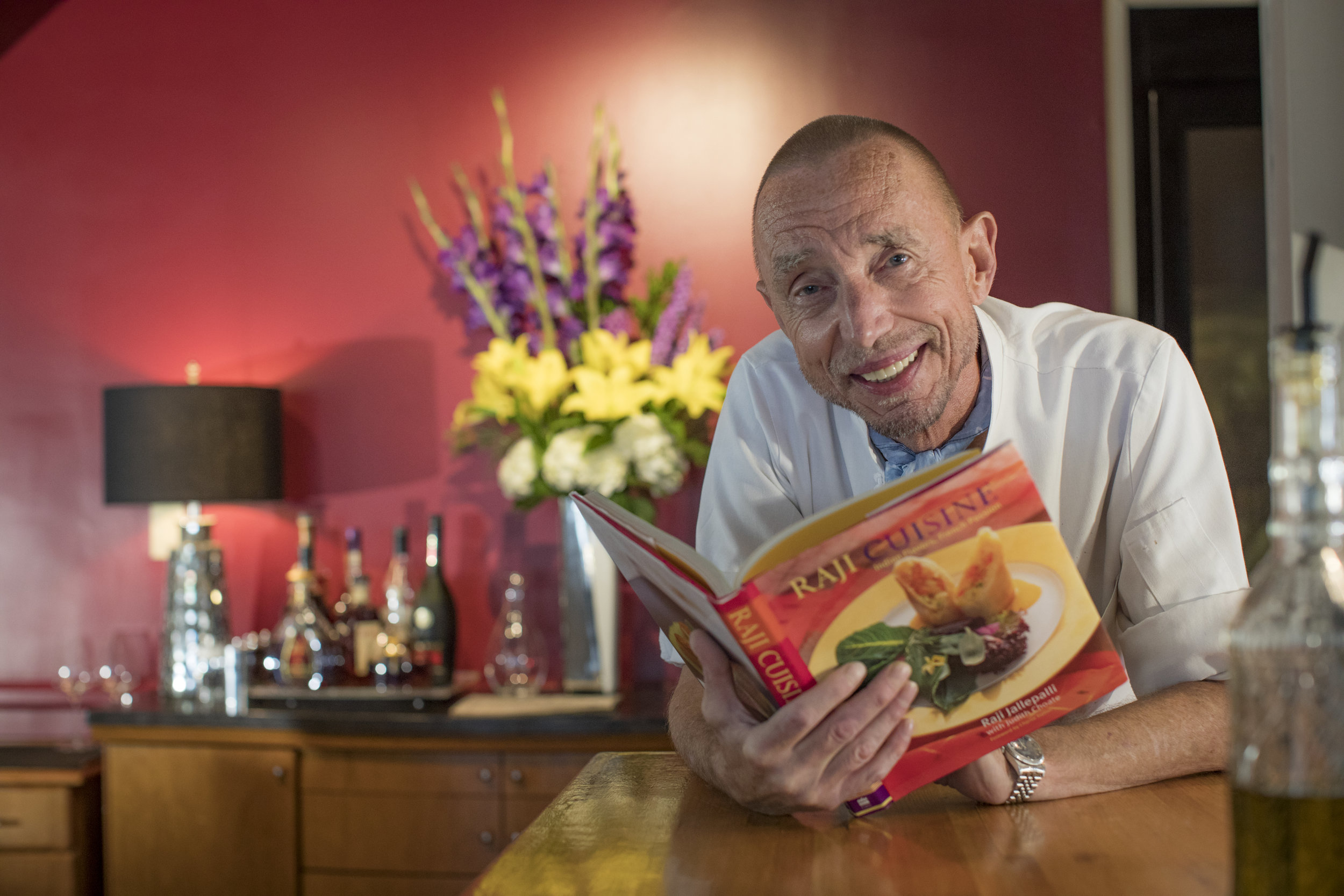 “She was a dot connector,”

exclaimed Erling Jensen, executive chef and owner of Erling Jensen restaurant in East Memphis. “Some fusion is mumbo jumbo, but she just meshed completely.” She was Raji Jallepalli, a Memphis chef by way of Hyderabad, India, and the dots she connected were two distinct cooking styles.

“Hers becomes one cuisine—not a melding of the two,”

Chef Charlie Trotter wrote in the foreword to her cookbook, Raji Cuisine: Indian Flavors, French Passion. And in her obituary, dated January 27, 2002, after she passed away from pancreatic cancer, The New York Times credits Jallepalli with “originating the fusion of classic French and Indian cuisines” and creating a culinary movement.

Let that sink in.

It’s easy to imagine the merging of country and blues to create rock n’ roll here in Memphis, Tennessee, but it might be the last place anyone could imagine this particular fusion of French and Indian cuisines happening. Somehow, these seemingly disparate cooking styles collided into something new and beautiful. Talk to anyone who ate at Restaurant Raji, which was located in the space that is now Andrew Michael Italian Kitchen on Brookhaven Circle, and they have their own unique story. For example, our good friend Max Maloney, a professor in the department of religion and philosophy at Christian Brothers University, told us that the curried mushroom bisque she served may be the best thing he’s ever eaten. “Layers and layers of flavor, so round and savory,” he said.

“By design, the food had a romantic sensibility.”

She left us with her cookbook, which is full of her culinary creations. These recipes offer valuable insight into her life in the kitchen; however, we may never know exactly how this alchemy was created. By her own account, she mostly worked alone in the kitchen with only another set of hands to tidy up and wash dishes.

“Each and every plate that went out was her,” Jensen explained. “It was her vision, her everything.” 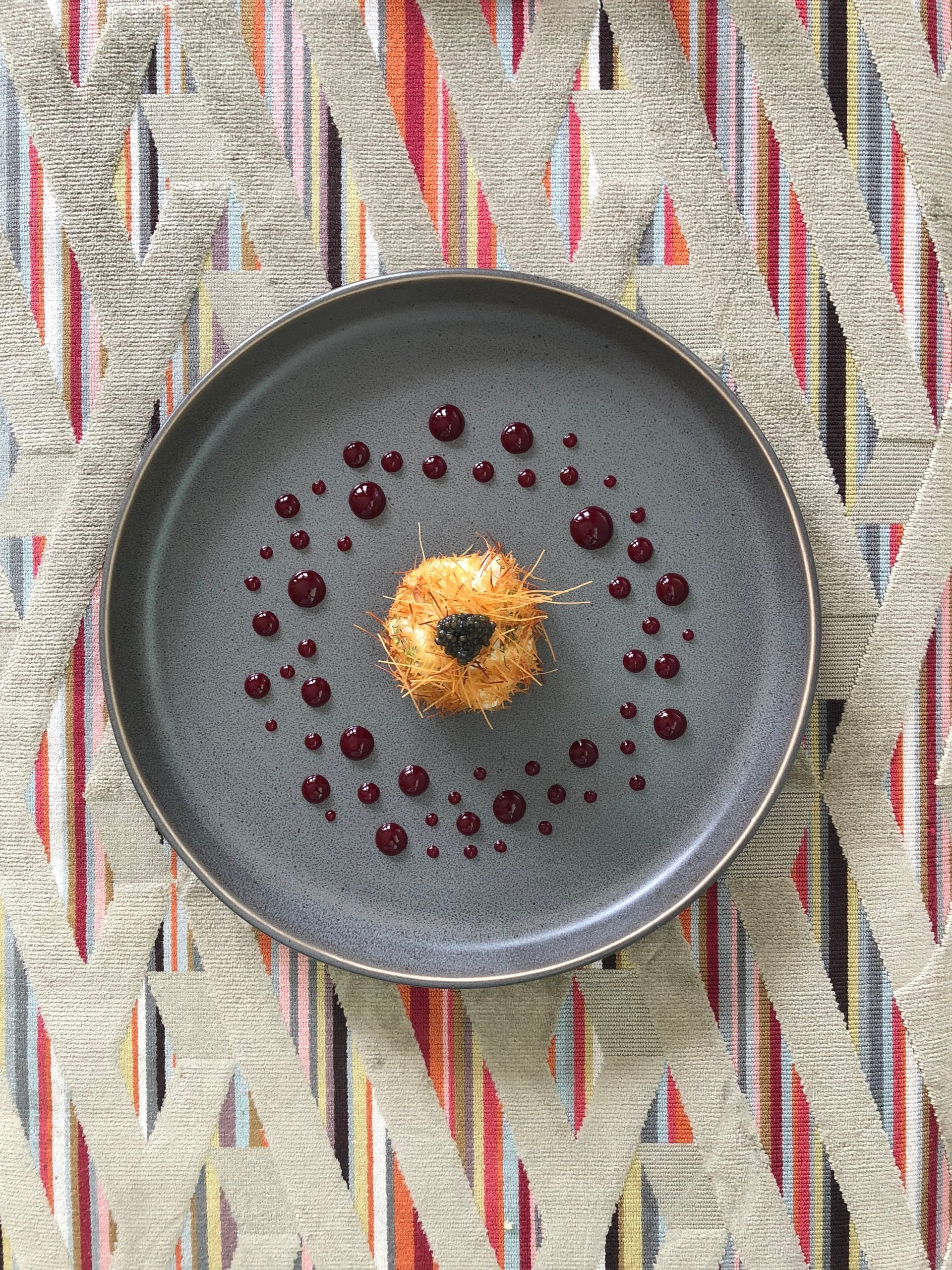 Crab Crostillant with Raspberry Sauce: “This is the first dish of hers that I fell in love with. I couldn’t believe the flavors would work together. Such a mind bending combination that is just so Raji.” – Erling Jensen
Photograph by Meredith Gardner

Her work and style of cooking continue to influence many young chefs even today. Shortly after graduating from Le Cordon Bleu in London, Chef Preeti Mistry—owner of Juhu Beach Club in Oakland, California, and author of The Juhu Beach Club Cookbook—received a gift from her sister that would forever impact the young chef’s style of cooking. It was Jallepalli’s cookbook. “Finding out about Raji, I was like, wow,” she told us in a phone interview. “She was another Indian chef in America—and a woman!”

She explained that in the late ’90s and early 2000s, Indian women were rarely seen in that context as professional and accomplished chefs with their own restaurants:

“She did something that no one else was doing at the time, and she was really pushing the envelope of what was Indian, not just taking the same Indian dishes and plating them differently.” 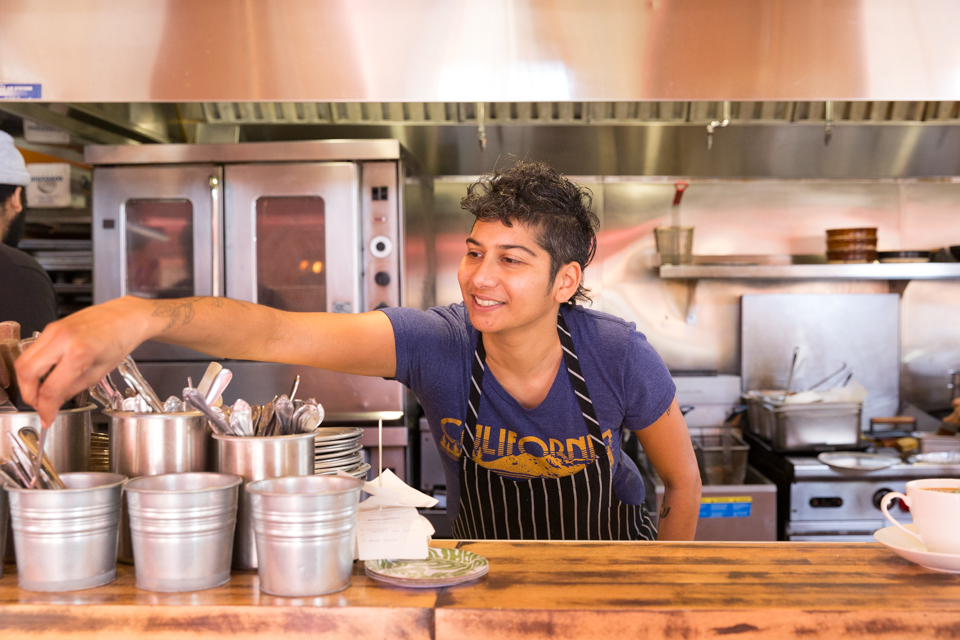 It’s not difficult to see the echoes of Jallepalli’s style in Chef Mistry’s dishes. Take her Masala Fries with Ghost Pepper Yogurt or her Indian version of the croque madame: it’s made with fiery serrano chilies and tamarind ketchup. She cheekily calls this particular creation Croque Memsahib.

As a chef who lived and worked in Memphis, Jallepalli deserves the attention of her adopted hometown. She was a really big deal. Unfortunately, the two of us missed dining at her restaurant. At the height of its popularity, we were still exclusively eating nachos, spaghetti and pizza, and had yet to grow up to be cookbook authors. So to better understand her style of cooking, this summer we cracked open her book and cooked a few dishes for ourselves. Since we had a bumper crop of butternut squash from the family garden, we selected the Velouté of Butternut Squash Soup. To accompany the soup, we also prepared Vegetable Purses with Cumin-Scented Tomatoes and Tomatoes Stuffed with Potato Korma. 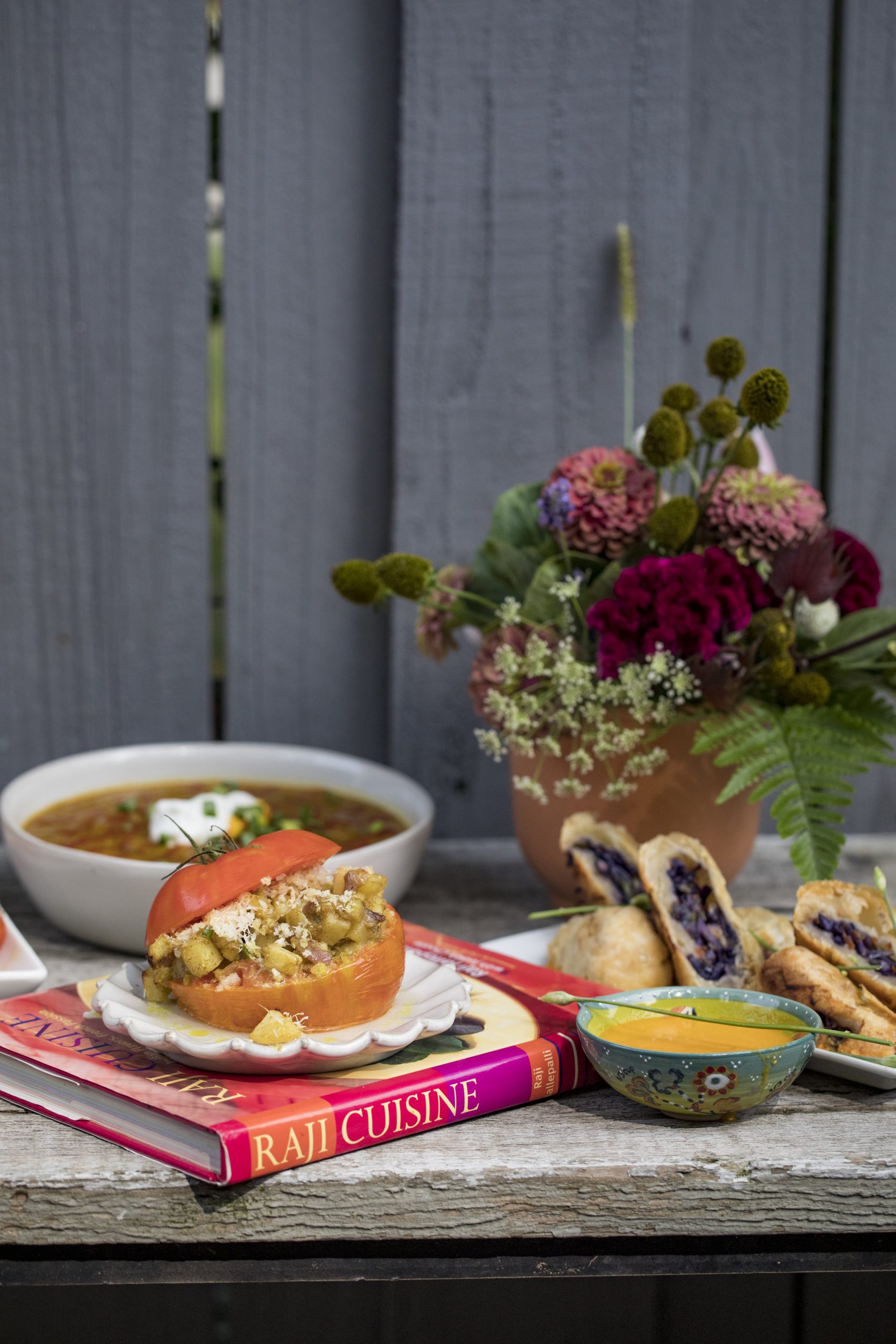 We were sure that these recipes would be complicated. How could they not be? French technique is so tightly controlled and Indian spices are so incredibly complex. We discovered that Jallepalli’s recipes were actually quite simple to prepare.

That’s the sign of a true master: a creative idea with the simplest possible execution.

The Velouté of Butternut Squash Soup was so easy and flavorful—plus it’s vegan and gluten-free. The Tomatoes Stuffed with Potato Korma incorporates cinnamon and cumin to create warmth in a dish that highlights two simple ingredients. The real hit of our night was the Vegetable Purses with Cumin-Scented Tomatoes. It’s easy to describe: close your eyes and image a croissant egg roll dipped in curry. It’s French, Asian and somehow very Memphis. We understood immediately why it was chosen for the cover of her book.

“Raji was charming. She worked hard to find her place and to make her place.”

The amazing thing is that it’s almost as if Jallepalli could see into the future. Her brand of fine dining was so far ahead of its time in a city known more for a good slab of ribs than Poussins Smoked with Sandalwood Chips. However, she connected the dots for us, from South India to Memphis to France and back. She drew a line from where we were to where we are going, from the classics that we all know to the unexpected and whimsical. Though she left this world too soon, she left behind a legacy of passionate individuality and creative cooking. What Chef Raji Jallepalli was able to accomplish in Memphis and in the world of cuisine was groundbreaking, and we continue to be inspired by her ideas and style.

Raji Cuisine: Indian Flavors, French Passion is out of print; however, you can sometimes locate a copy at the Second Editions bookstore at the Benjamin L. Hooks Central Library. Copies are also available on Amazon.

We highly recommend adding a copy of this seminal cookbook to your collection.

There’s so much more to know about Chef Raji Jallepalli, but here are a few notable milestones:

1997: Jallepalli is nominated for “Best Chef: Southeast” by The James Beard Foundation.

2002: At age 52, Jallepalli passes away from stomach cancer at her home in Memphis, Tennessee.

A Cabin in the Woods

The Art of Tsunami