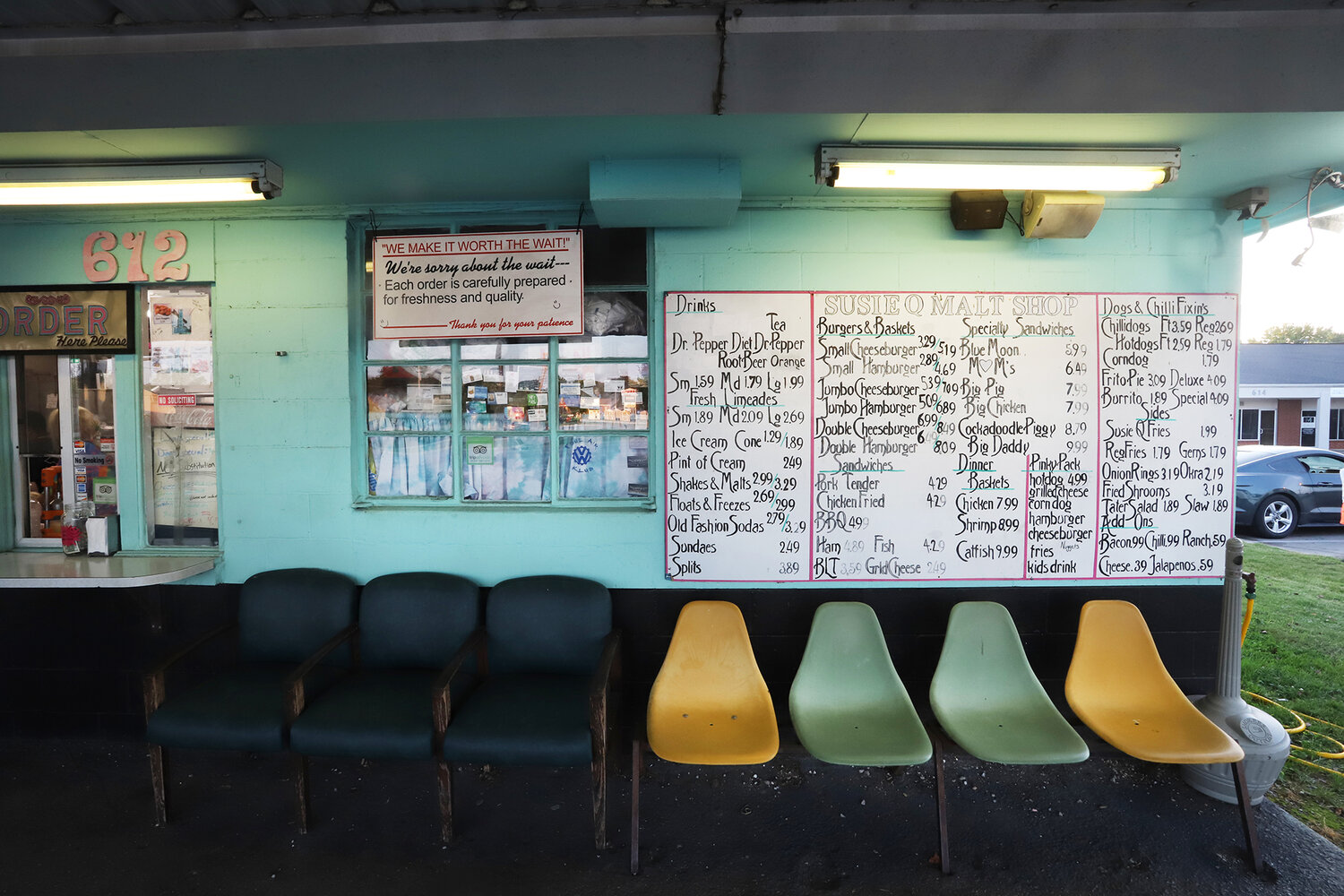 Frequent trips to Low Fi made me an Onyx Coffee Lab fan.

When Bailey Biggers, Low Fi co-owner, told me that Onyx was opening a new headquarters in Rogers, Arkansas with an Airbnb, I immediately wanted to go. I had visited Crystal Bridges Museum of American Art in nearby Bentonville a couple of years earlier and had done a quick drive-by in Rogers, so I was somewhat familiar with the area. 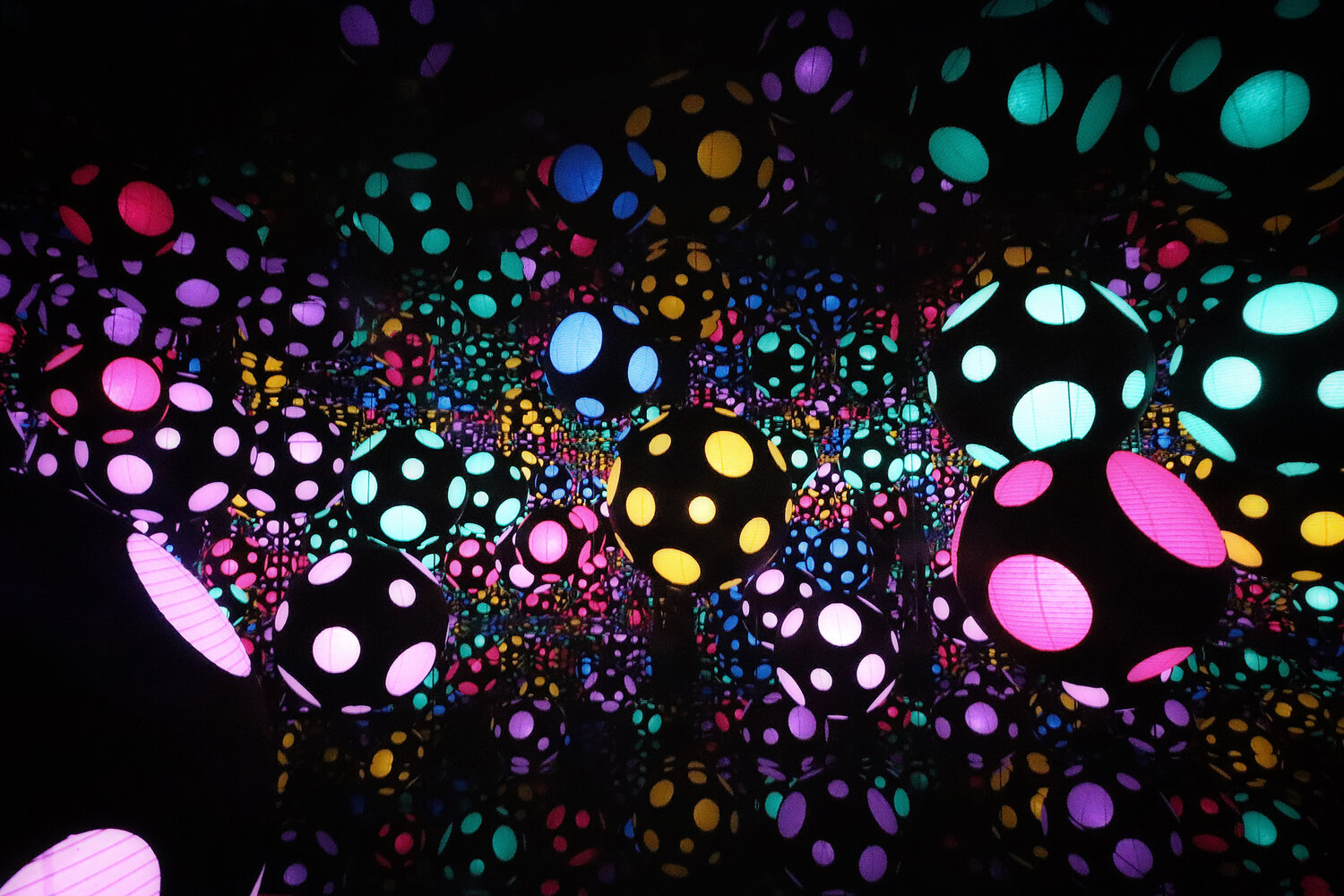 When I told friends that Richard—my favorite dude/emergency contact/photographer—and I were headed to Rogers for the weekend, I was met with blank stares. Here’s a breakdown of the area known as Northwest Arkansas: It includes Fayetteville, Springdale, Rogers and Bentonville—the third, fourth, eighth and 10th largest cities in Arkansas. Rogers has a population of about 55,000 according to the 2010 census, but judging from the Walmart boom, I’d guess it’s grown a lot since 2010.

In a nutshell, Walmart has brought people from all over the world to work in Northwest Arkansas.

As a result, there are all of the things that young professionals like—cute condos,  bike trails, third wave coffee, yoga studios, breweries, fancy restaurants, art and so on. 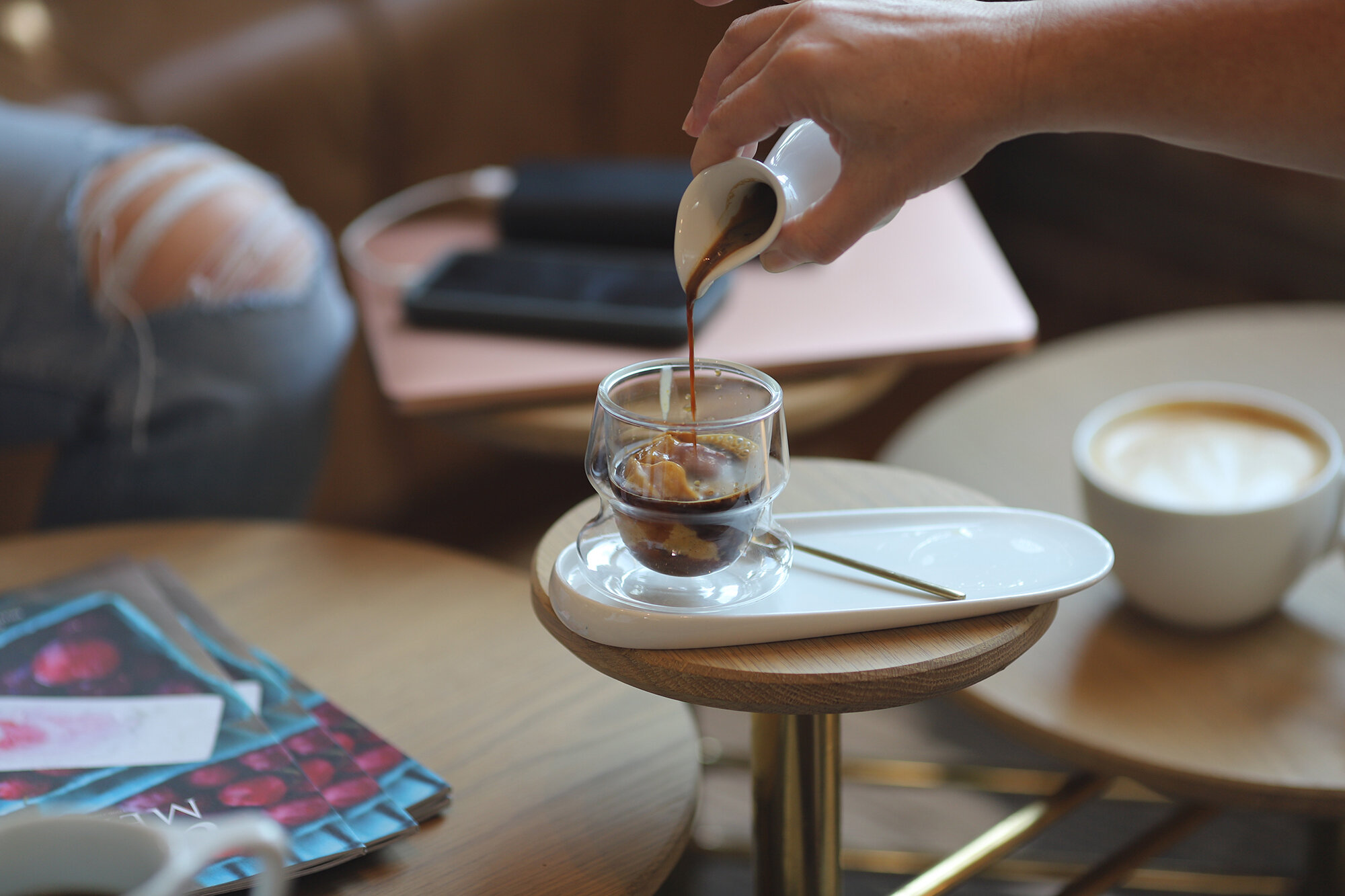 The Onyx headquarters is in the center of downtown Rogers, and its building includes several Onyx-owned spots: a massive Onyx coffee shop; Doughp (pronounced “dope”), a full bakery and kitchen that supply the coffee shop and cater events; an event space called Dry Storage; and a speakeasy called The Foreman. Additionally, the space houses Yeyo’s, a Mexican restaurant owned by chef/farmer Rafael Rios; 11 apartments, including one we rented for the weekend through Airbnb; and Heirloom, an intimate, hidden, 20-seat, tasting-menu restaurant that serves a multi-course prefix dinner by reservation only three or four nights a week. 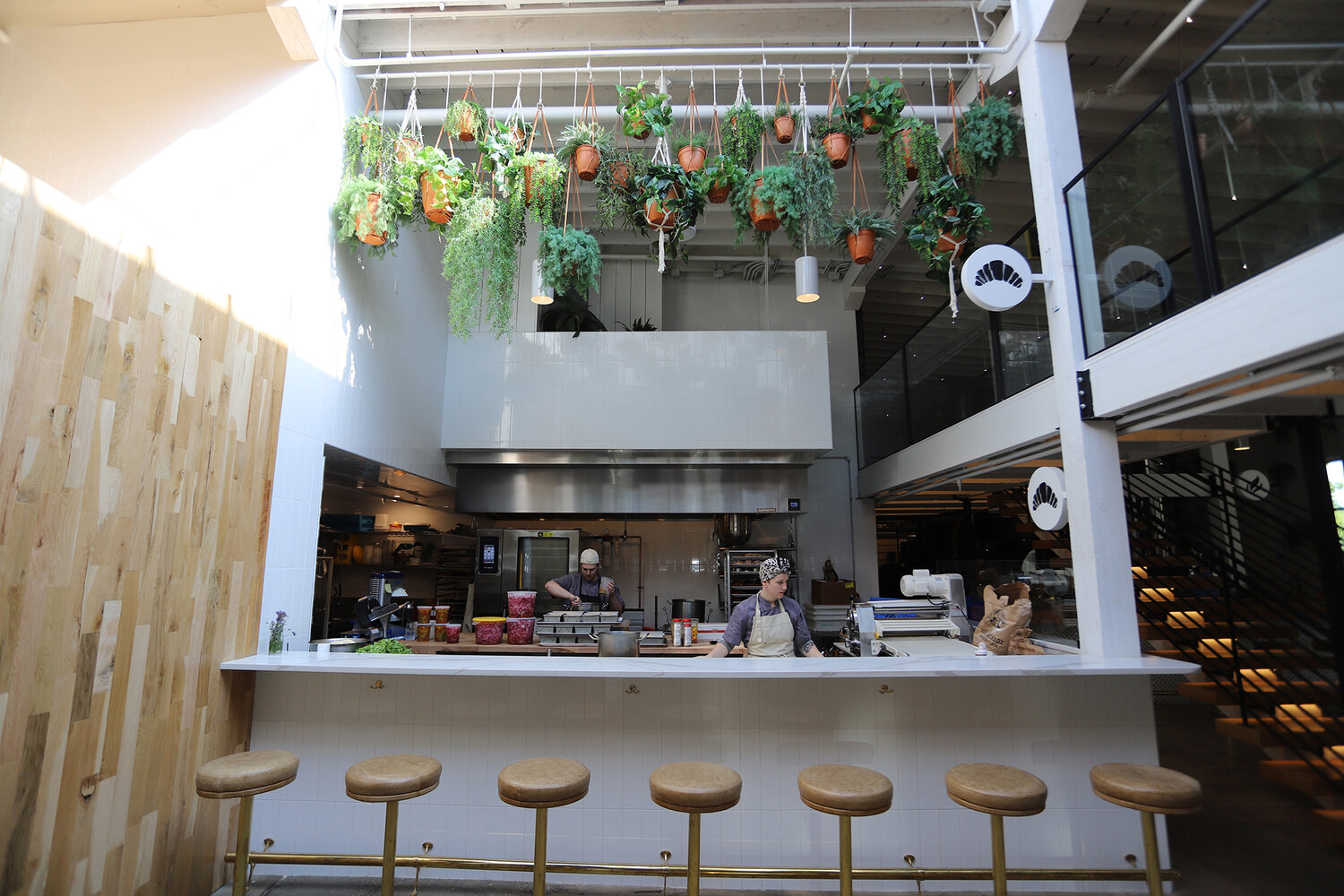 We arrived late Saturday afternoon and easily parked in front of the Onyx building near the entrance to Yeyo’s (which was sadly under the final stages of construction during our visit) to find our apartment for the weekend. The Airbnb was a very hip space with a giant glass, garage-style door that let in tons of light. (It looked like it opened, but we never figured out how.) The kitchen and stylish living space were downstairs, and the cozy bedroom and spacious bathroom were upstairs. 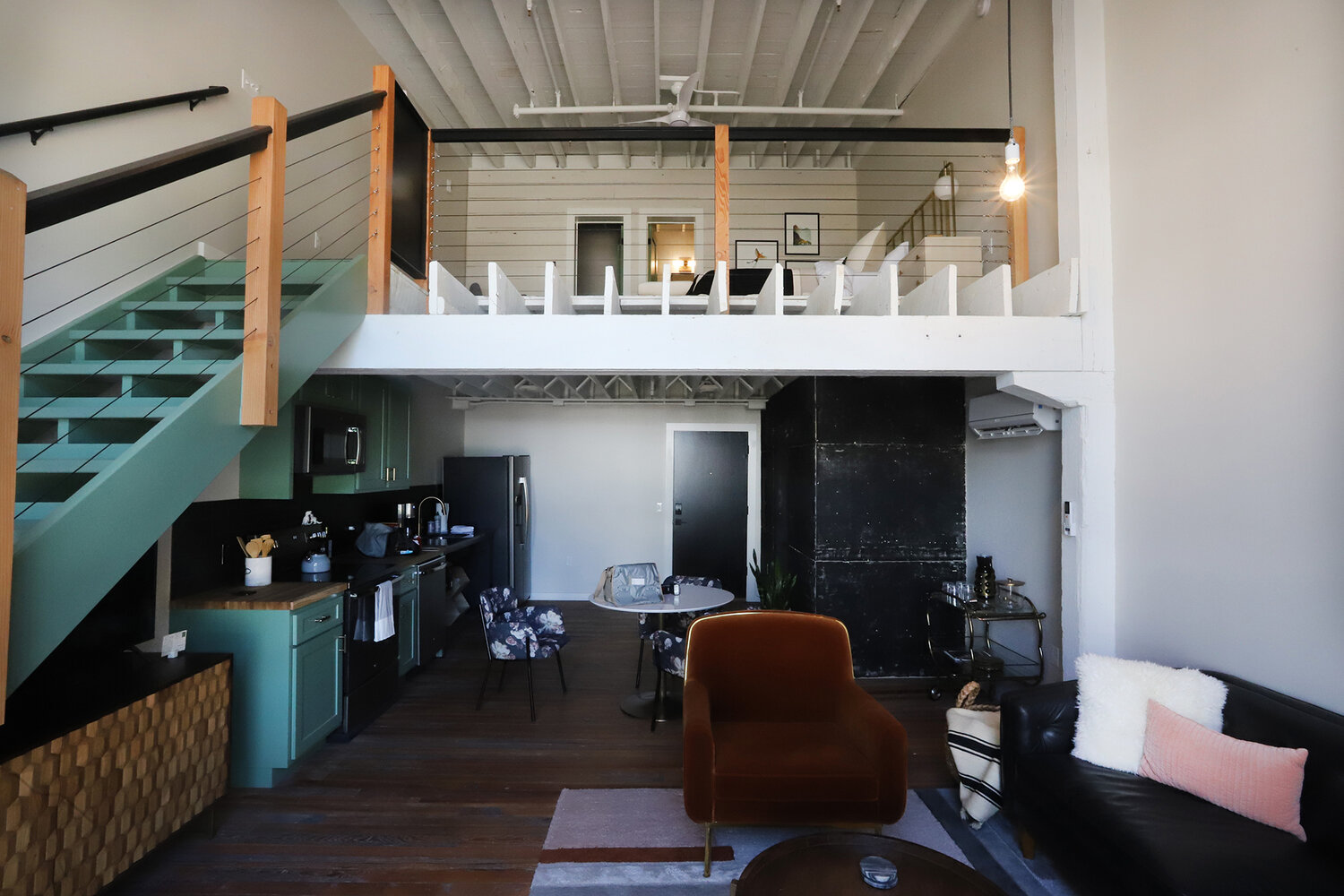 Since it was leaning towards evening, we freshened up and went out to explore downtown Rogers. Sadly, we missed the farmers market by a few hours, but we would have been able to walk to it easily. (It runs on Saturdays, May to October, 8 a.m. to 1 p.m.) I saw a sign for pupusas next to the Jiffy Kwick mart on South Arkansas Street on our drive in and told Richard we were going there first. They make about 450 pupusas under two tents every Saturday and sell them for $1 each. I didn’t get to see the pupusas being made, but I did buy a few before they were gone.

We carried them down a few blocks to the Ozark Beer Company brewery and taproom, built in a century-old flour mill. They have lots of outdoor seating and a permanent food truck. It was pretty hot, so we went inside to sit at the bar. Naturally, I ordered the Onyx Coffee Stout (5.3% abv). It’s a milk stout featuring French-roasted, cold-extracted Red Queen and Mexico Zongozotla coffee.

In the spring, Ozark hosts the Rituals festival to bring together third wave coffee and craft beer.

I’ll admit, the new Ozark Hard Water (5% abv), available on tap in grapefruit, strawberry lime and pineapple coconut, also caught my eye. I’m not a White Claw type of person, but a locally crafted hard water? I can get behind that. It really tasted good, but so much like bubbly water that I deemed it too dangerous for day drinking.

(They also had kombucha and wine available, which would shut up a lot of Memphis people who complain about breweries only selling beer. Ha!)

The bartenders were really nice, and, maybe because Richard had his camera, everyone was curious about where we came from and who we were. Before we knew it, Teddy, the head brewer who moved to Rogers from Austin, came out and chatted us up. Soon Richard was off on a tour of the brewery and later returned with a four-pack of small-batch cans that Teddy wanted us to try.

Ozark beer is not for sale in Tennessee, but you can find it in West Memphis. And, yes, the hard water can be found in cans too, but only in grapefruit for now. 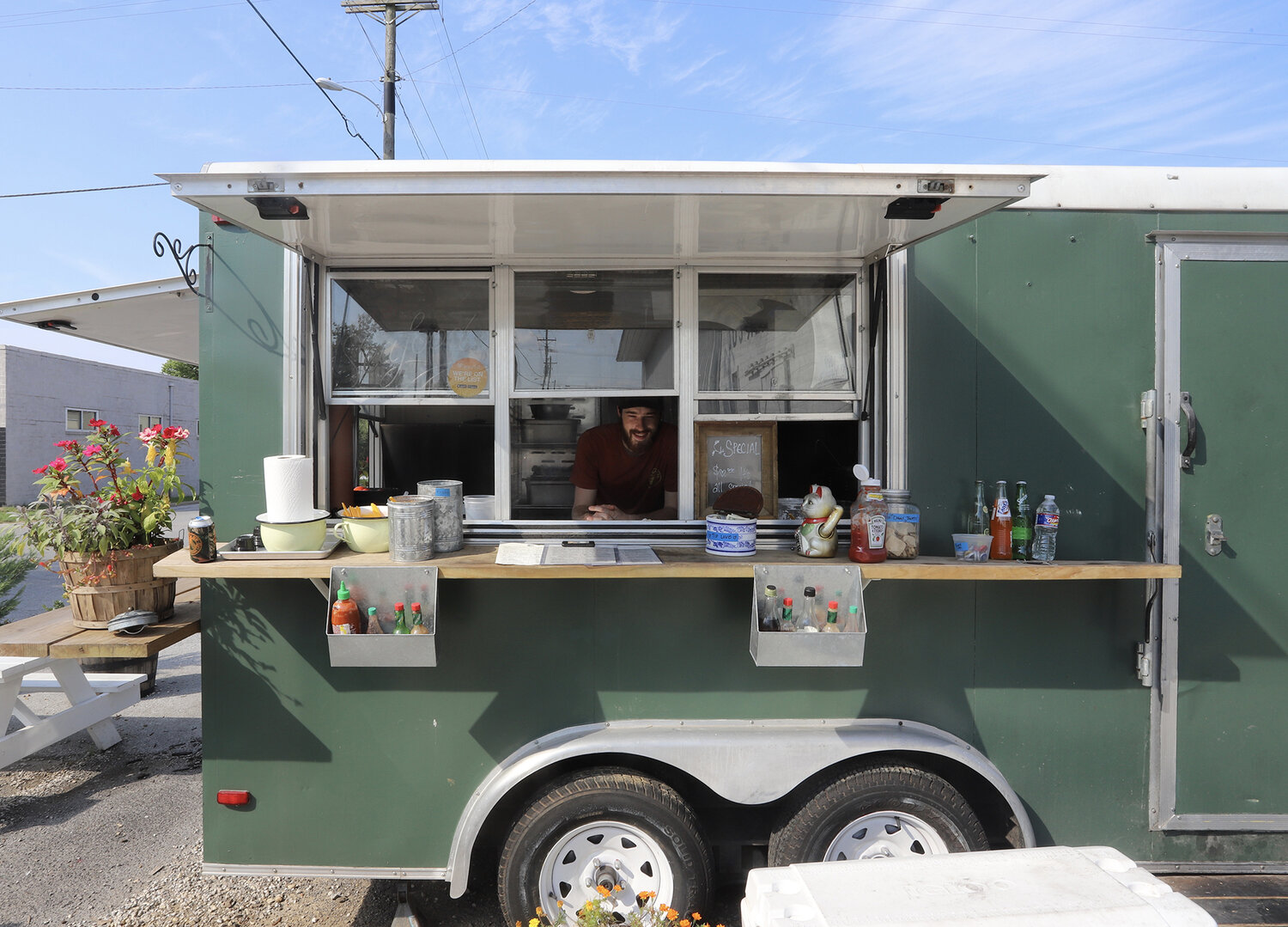 About their food truck. It’s called Three Cents an Acre (that’s what Napoleon paid for the Louisiana Purchase), and it features real-deal, chef-driven Cajun cooking. Chef Mike Robertshaw grew up in Fayetteville, but his mom is from Hammond, Louisiana. Some of the things we tried and highly recommend: the fried chicken poboy with pimento cheese and bacon; the fried chicken, grits and greens bowl; and the “lushpuppies” (“crispy floofs, cheesy, honey, jalapeño spice, sea salt and lemon”). 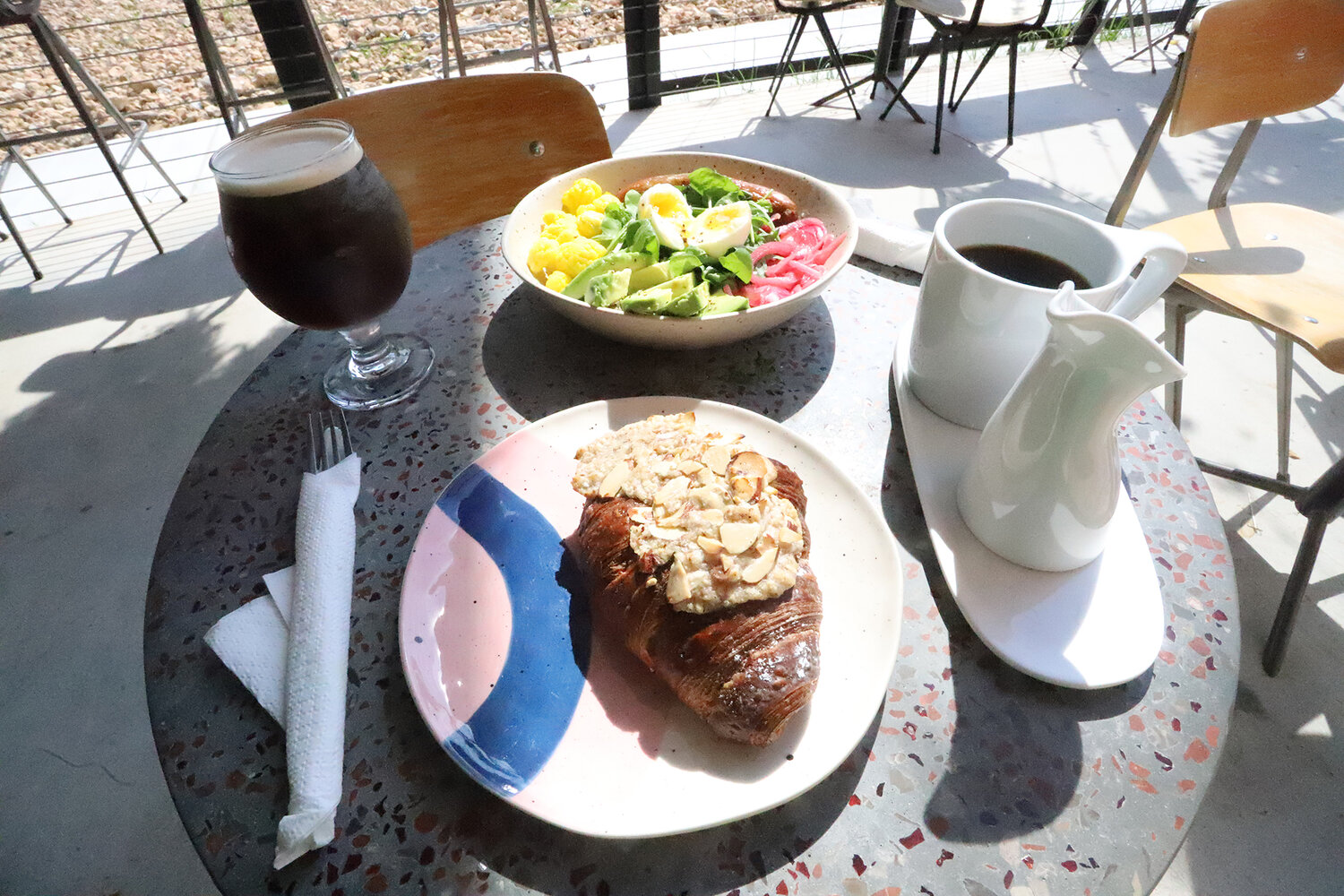 If you’re looking for a fancier meal, check out Heirloom inside of Onyx. As I mentioned, they do 20-seat tastings with seven to 10 courses three or four days a week. The only problem is that the dinners sell out months in advance. So you’ve got to be on the ball. The good news is, they often do “pass throughs” at the window by the Onyx patio, so if you time it right, you can get some of their delicious food to go.

We did get to check out The Foreman bar, which is open in the upstairs of Onyx from 4 p.m. to “late.” It’s the type of bar where the bartenders seriously geek out on the drinks and may pay more attention to each other than to you, but they know what they are doing and the cocktails are top notch. It wasn’t super crowded when we were there, but we could hear its music in our Airbnb until the wee hours (which wasn’t necessarily a bad thing).

Sunday morning it was delightful to roll out of bed and walk just a few short feet to some of the best coffee available in the region. 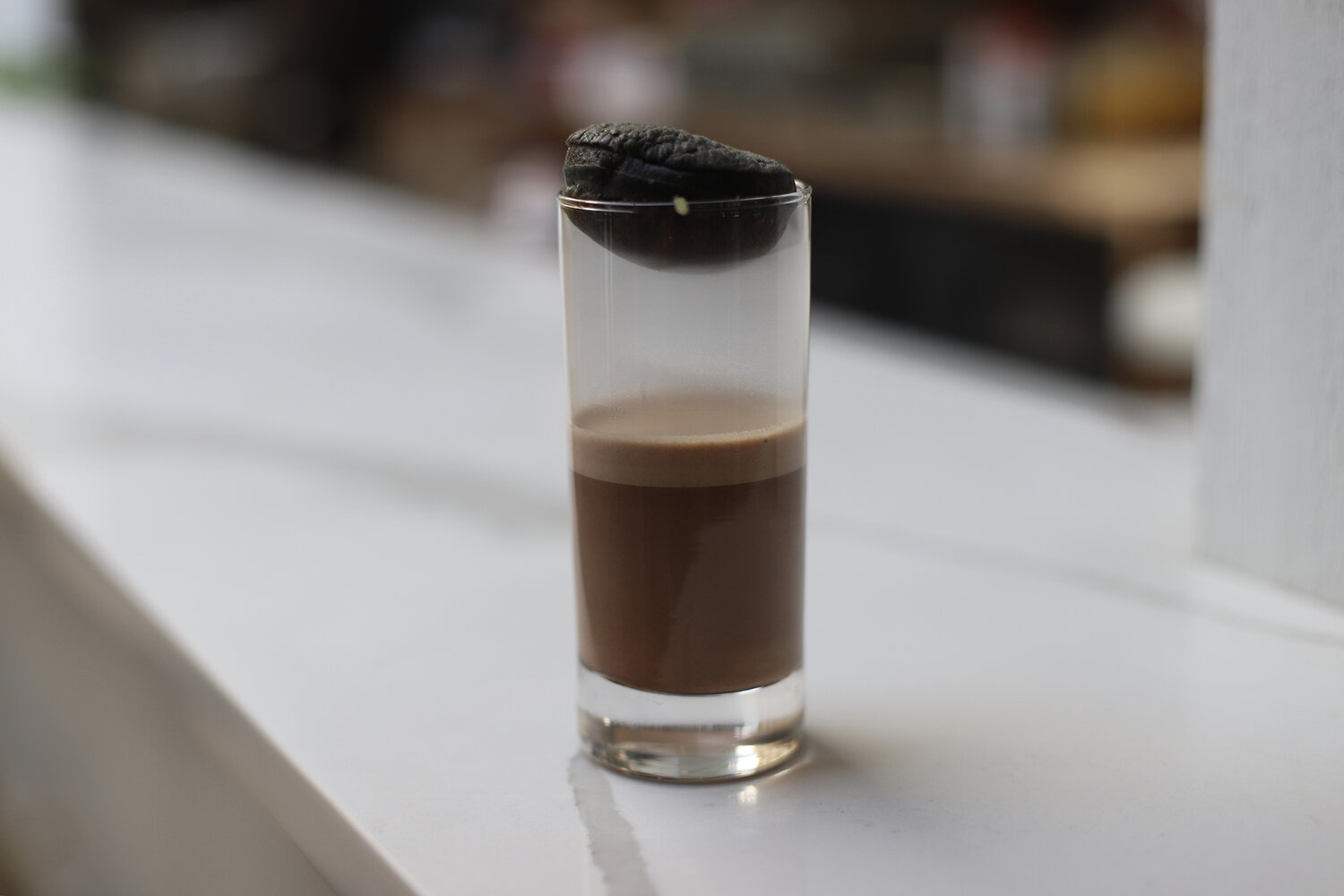 We enjoyed a pour-over, a nitro, a quinoa bowl and a fresh almond butter croissant before heading to nearby Crystal Bridges for Yayoi Kusama’s Infinity Mirrored Room—My Heart is Dancing into the Universe, which is now permanently on view. It’s a small room filled with mirrors and paper lanterns that have dots that change color and appear to “expand forever into the universe.” It’s the icing on the cake, as Crystal Bridges was already a must-visit. (Check out the North Forest Lights exhibit that will illuminate the museum’s grounds with light and sound through mid-February.)

On February 22, The Momentary, a Crystal Bridges satellite location, opens to the public; like Crystal Bridges, it is absolutely free. The space will bring contemporary visual, performing and culinary arts into a creative, communal space where everyone is welcome. It will also house an Onyx coffee shop. 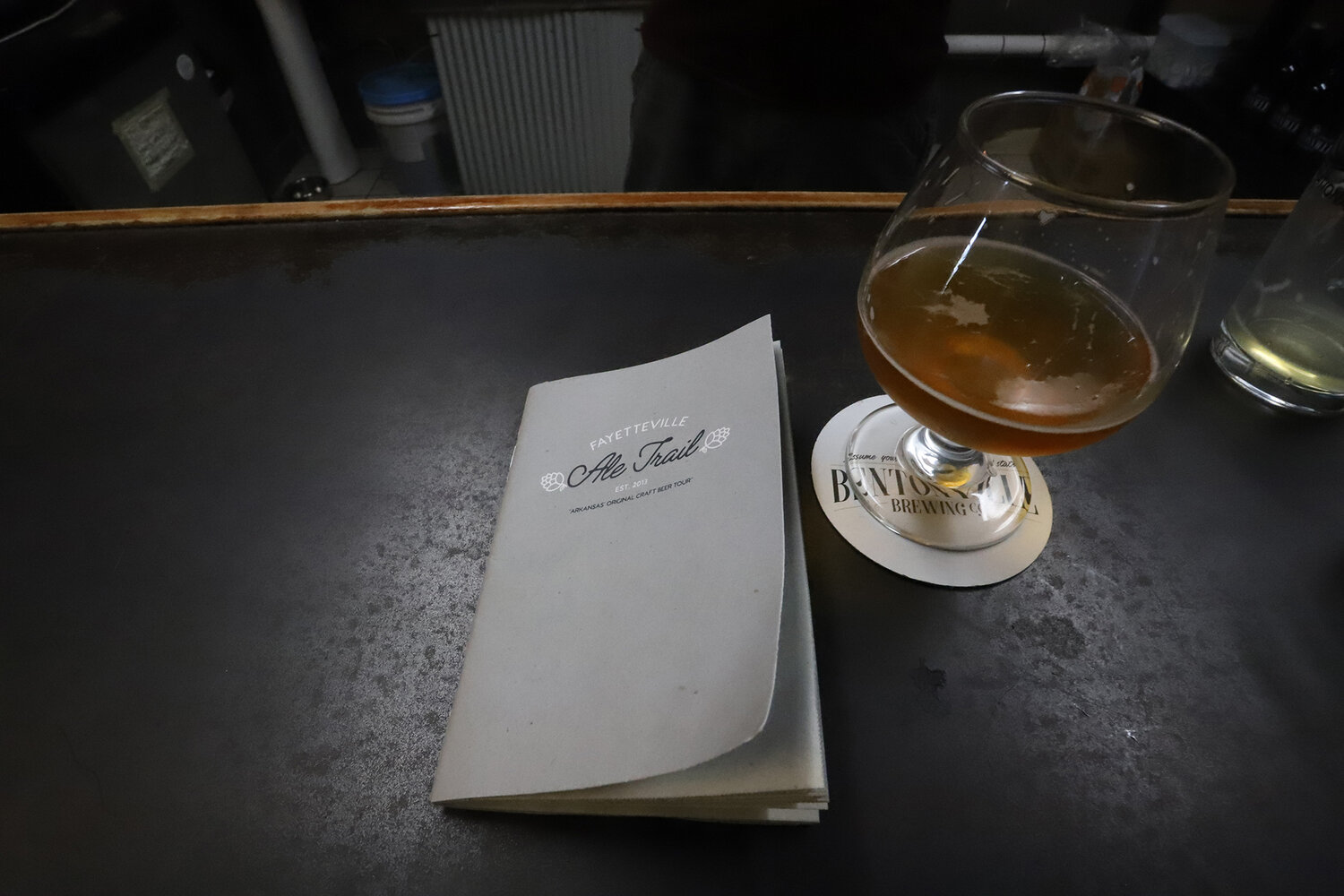 We easily could have stayed in Bentonville to eat and drink, but this was a Rogers trip, so back to Rogers we went. Our first stop was Bentonville Brewing Company, which was temporarily being housed in Rogers. (Temporarily = two years, with a slated return to a gorgeous new location in Bentonville any day now.) It was more warehouse than taproom, but we met a nice bartender who moved to the area from Wisconsin and we drank a Lil’ Wrecker and a kolsch before getting overwhelmed by a large group of folks on the Fayetteville Ale Trail. Judging from their passports, they’d covered quite a few of the 15 stops.

When you fill in all of the stops on the passport, you mail it in and receive a free prize in return. (No one at the bar knew what the prize was.) Hey, can Memphis get an ale trail?

Next we went to Hawk Moth, which I insisted on calling Hawkwind (because Lemmy!). They just happened to be celebrating their one-year anniversary, so it was quite festive. It features a sleek “beer parlor” with a fairly small brewery. I did like the backyard, but, again, it was real hot out! Their beers were all very high alcohol by volume, so we just had one and hit the road. 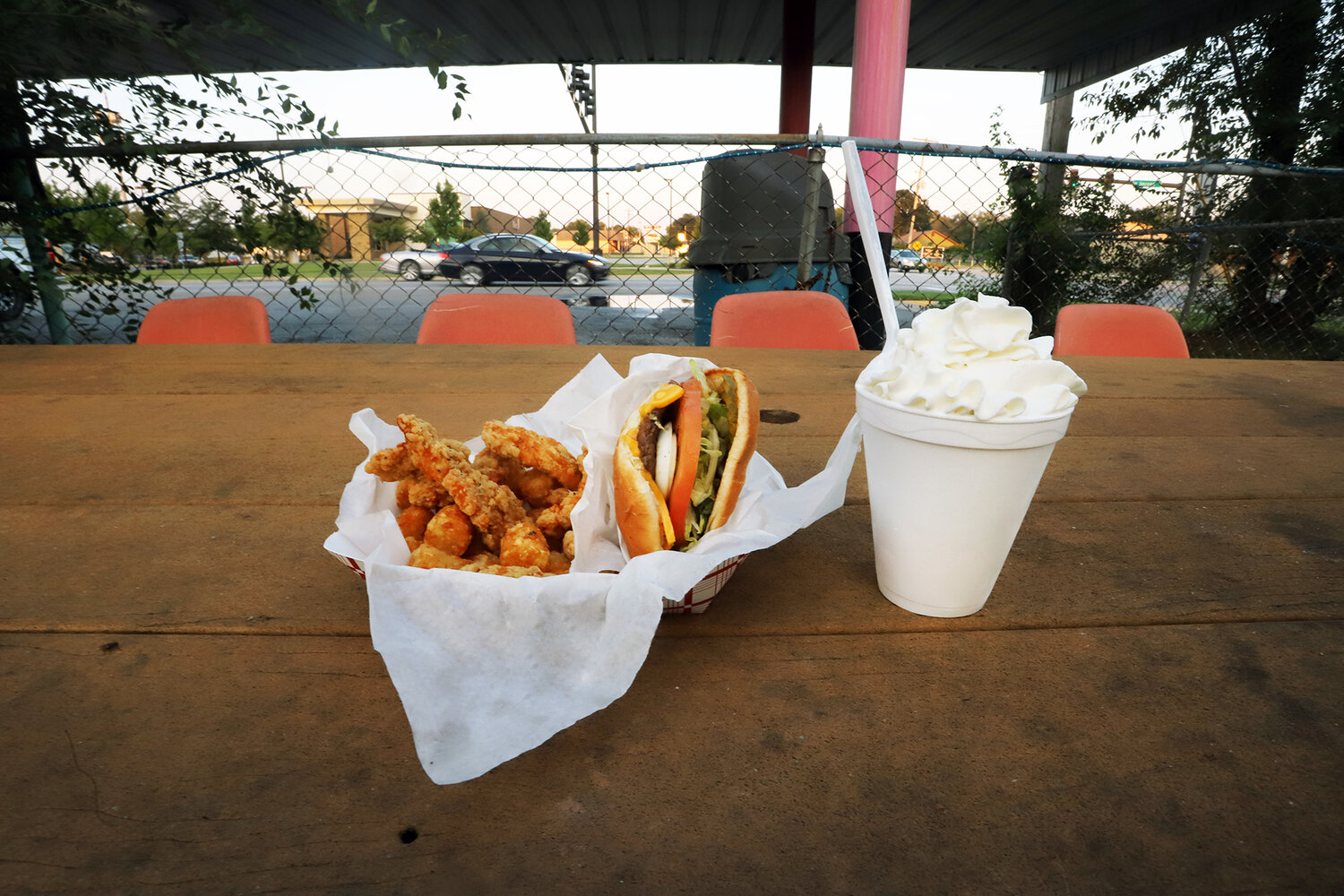 That one beer hit harder than expected, so we didn’t make it to the other nearby brewery, New Province. Instead, we lined up at Susie Q Malt Shop for a burger and a sundae.

It was very Jerry’s Sno Cones-ish, which is a compliment.

(However, they do close for the winter each year.)

Then we may or may not have gone by Ozark Brewing one more time before calling it a night. 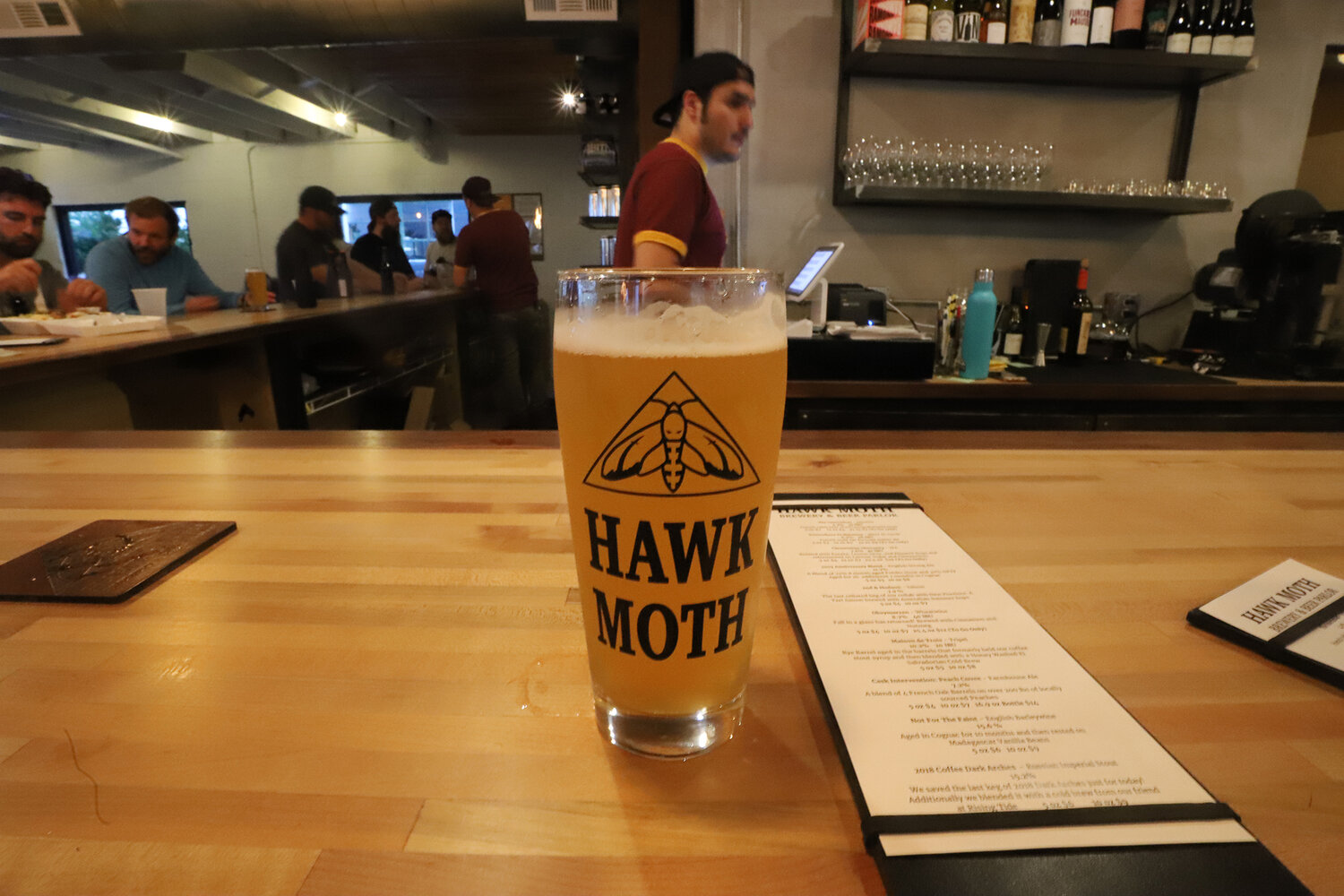 We ended our stay at Onyx the next morning by talking with owners Andrea and Jon Allen, learning more about their business and tasting all of the coffees! (Read more here!)

We didn’t bring our bikes, but we will next time. The Rogers Greenway and Trails System plan is to loop nearly 60 miles throughout Rogers using floodways, drainage systems, utility corridors and parks property for much of the trail locations. It will eventually link to the trail systems in the larger Northwest Arkansas region.

A Conversation with Andrea and Jon Allen