Quarantining with our very own Memphis-style waterfall

Alternatively, we could spend hours trying to determine the best way to eat Memphis-style cheese dip. (Something, surprisingly, none of our therapists ever spoke to us about.)

We recommend the latter.

During these “unprecedented times,” we also recommend disregarding all of TLC’s sound advice—”don’t go chasing waterfalls”—and bring the closest thing to a waterfall you can into your house. And then fill it with Memphis-style cheese dip. And eat that cheese dip. 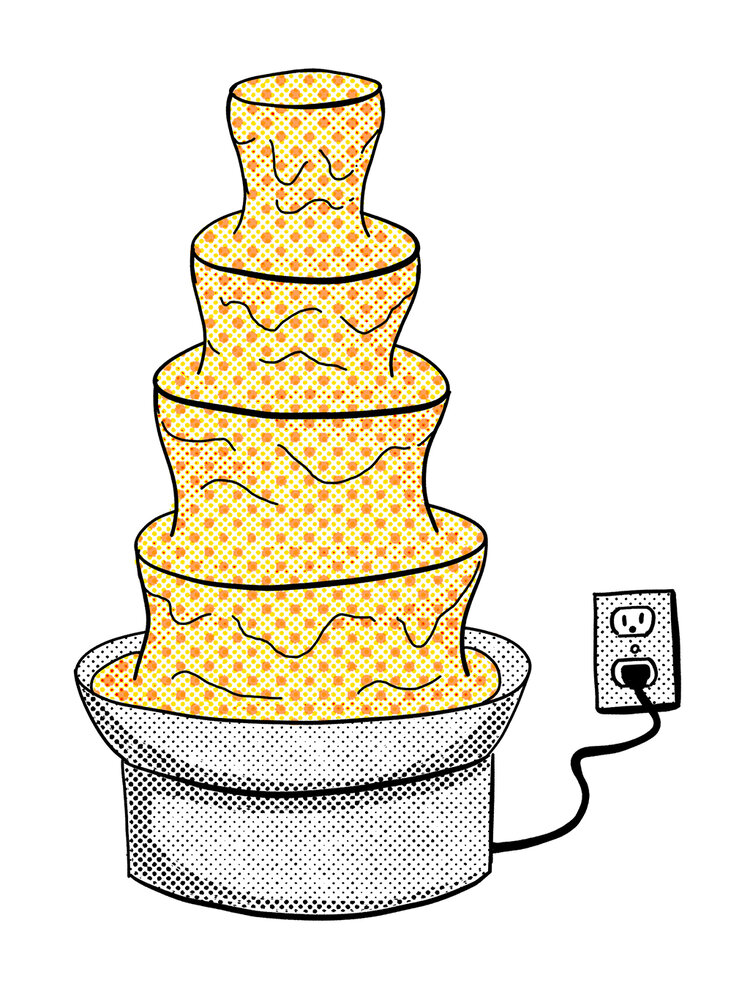 It is a new favorite because of how good it is. And because the package doesn’t have an offensive picture of a Mexican on it. Not even on the bottom. I looked.

The three-tiered, chocolate-turned-cheese fountain came in the mail, and we eagerly tested it out. We started by using only two tubs of Tom’s to fill it. With two people and four dogs, we assumed that was more than enough cheese dip. And we assumed that you shouldn’t let the same cheese dip run for weeks. You shouldn’t just let it run and take little bites as you come in from the yard every evening. Or stick your finger in the stream on the way to do laundry. Or put your morning coffee mug under it to add a little “cream” to your daily caffeine boost.

Because the cheese dip would go bad. Perhaps really bad.

And that would outweigh the benefits of easy access to cheese coffee. 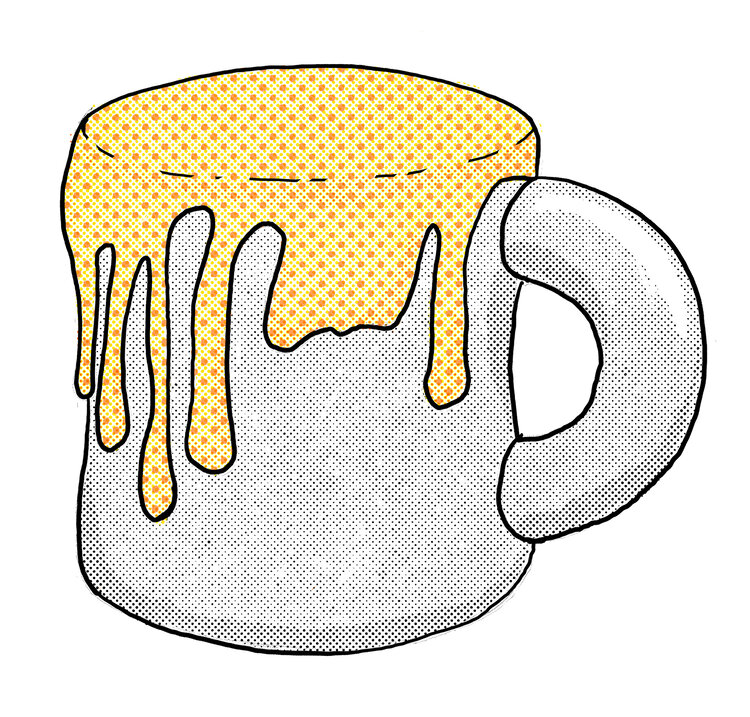 Two tubs may be enough for two adults and four dogs (who were waiting patiently for the whole damn fountain to explode and for it to rain cheese dip). But it was not enough for the fountain. Or, rather, the fountain turned two tubs of cheese dip into a frothy, air-bubble-filled mess. Similar to the consistency of a McDonald’s milkshake that is forgotten in a hot car.

If you have ever returned to a car-warmed McDonald’s milkshake, you know that you immediately questioned the four states of matter (is there a fifth?) and threw it the hell out. With the chocolate cheese fountain, we just added another tub of Tom’s, and it was fine.

But it was a ton of cheese dip. That we ostensibly needed to eat in the next few hours.

The dogs were up to the challenge. And they showed us by circling the fountain like sharks. Generating a tornado in our kitchen like kids swimming all in the same direction in a pool trying to make a backyard hurricane. Or some kind of natural disaster.

In our home, the palpable feeling of oncoming disaster is what we call ambiance. It was time to eat the cheese dip.

But I can tell you it was messier. There was a lot of finger licking. And paw licking. (Fingers by people and dogs. Paws just by dogs.)

And, reader, it was loud. Very loud. Which is something I didn’t know to ask about or research. Rookie mistake, perhaps. Although Bed Bath & Beyond had ample time to warn me on the hundreds of coupon mailers they have sent me each week since I was born. But they didn’t. So I think it is a little my fault and mostly Bed Bath & Beyond’s fault. Specifically the “beyond” section of their enterprise. My suggestion to Bed Bath & Beyond: Stick to the beds and baths and leave the beyonds to scientists and astronauts. People who can dedicate years and years of their lives to important noble, scientific pursuits, like making cheese fountain motors quiet.

As I said, we  ordered a loud fountain. It made an unpleasant sound. Somewhere between a groan and a grind.

In our home, a constant groan isn’t what we call ambiance.

The groaning and the oozing ounces of cheese dip were a lot of pressure. We couldn’t eat all of it. And, due to the pandemic, we were alone to try.

It became a metaphor for our situation: working a lot, going nowhere, and being wasted.

And we’d also like to remind you that the fountain was groaning.

But sticking chips in and out of a waterfall of cheese was way easier than working through those therapy issues, so there’s that.

And so I would recommend it if you are bored and lonely and hungry and there is a global pandemic.

Even if it was a fool’s errand—because everyone knows that the best way to eat Memphis-style cheese dip, to really enjoy the pornographic jiggle of cold cheese in somewhat liquid form, is to eat it with a spoon directly from the container. At 2 a.m. Draped in refrigerator light. Half-drunk with one sock on.

Julia McCloy is a writer living in Memphis. Laughing is her raison d’etre, which is French for her other raisin. She has two raisins. Her writing has appeared in McSweeney’s. @julia_mccloy

Jim Steffen is an illustrator living in Memphis. When he was little he told his mom that he wanted to be a “drawer” when he grew up. It confused her. But hey, Mom, look now. @jimbojimbo

A Garden Grows in North Memphis