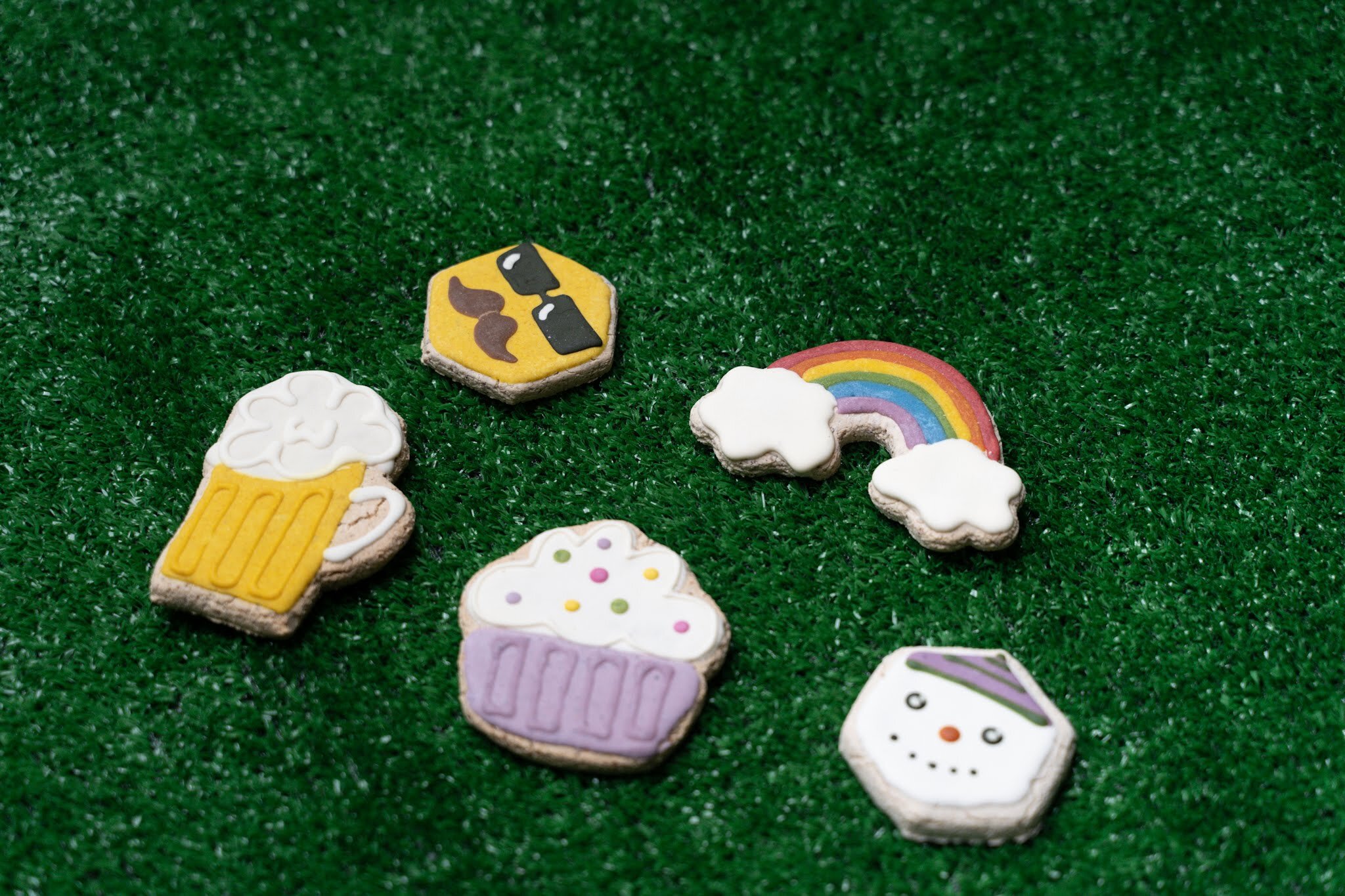 Before visiting any of the great local businesses mentioned in this story, please check for changes in business hours, processes, and inventory due to COVID-19.

In 2005, Farm House Barkery co-owner Becky Bruewer lost two dogs—Buddy and Elliott—to kidney failure, which her vet attributed to melamine in imported dog treats. Melamine, an industrial chemical that isn’t approved by the FDA for use in animal or human food, has been found in wheat gluten and rice-protein concentrate in some imported dog foods and has been associated with kidney problems in dogs.

“I swore I’d never, ever give my dogs more treats off the shelf,” says Bruewer, who runs Farm House Barkery in Newbern, Tennessee, with her husband, Tim. Locally, the couple sells treats at the Memphis Farmers Market and Cordelia’s Market in Harbor Town. 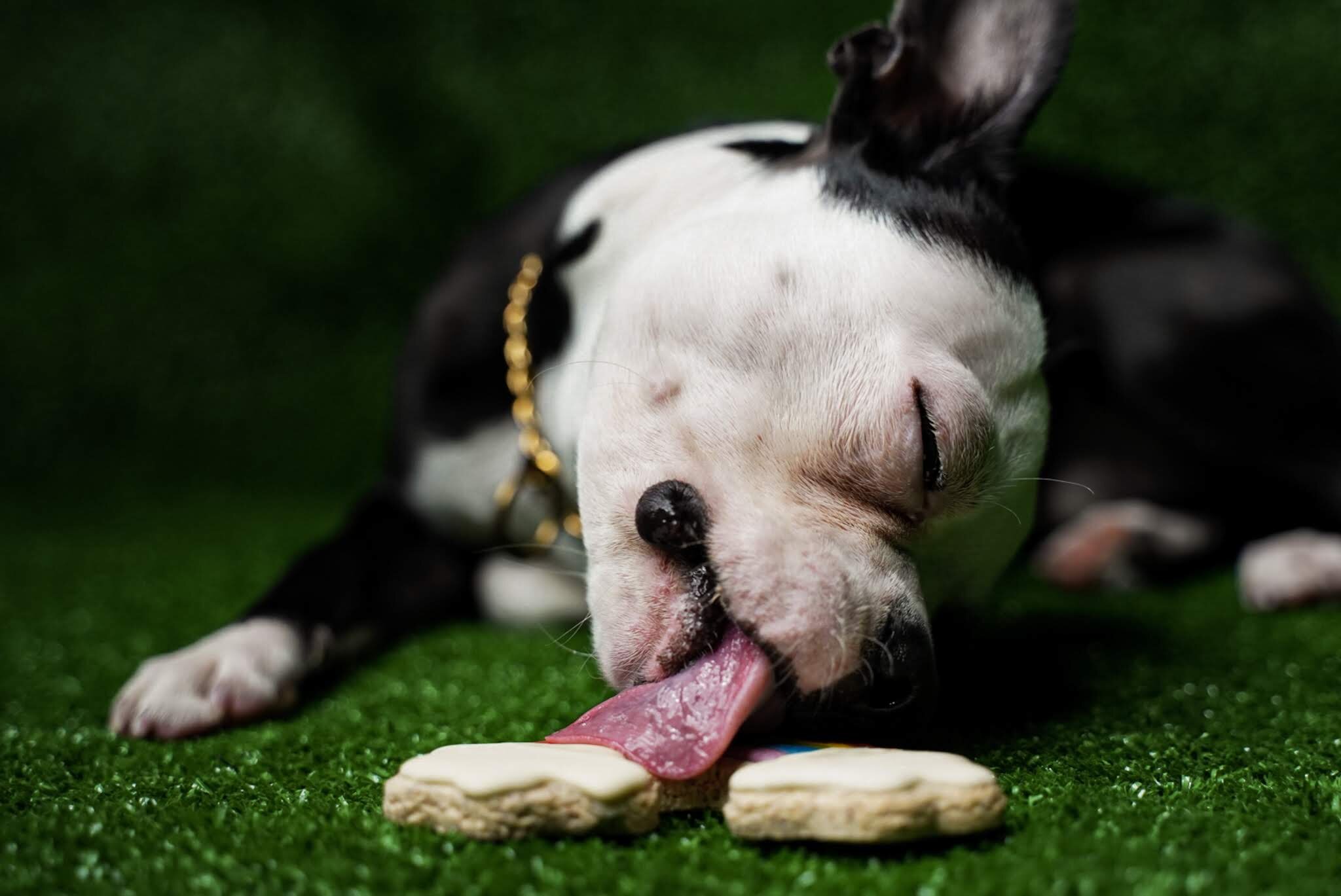 Farm House Barkery is one of a handful of local and regional dog bakers and treat makers, both large and small, creating healthy, all-natural treats and providing Memphis pups with an alternative to mass-produced, store-bought treats.

After Buddy and Elliott passed, the Bruewers began baking dog treats at home to ensure their pups were safe from imported ingredients. At the time, Bruewer was a full-time nurse with no intentions of becoming a full-time dog-treat baker. But after she gifted her vet with some treats, the vet encouraged Bruewer to start baking the treats commercially.

“He kept after me about it, and, on a challenge, I researched what I would need to do to start a bakery business. I just opened the company to see if he was right,” Bruewer says. 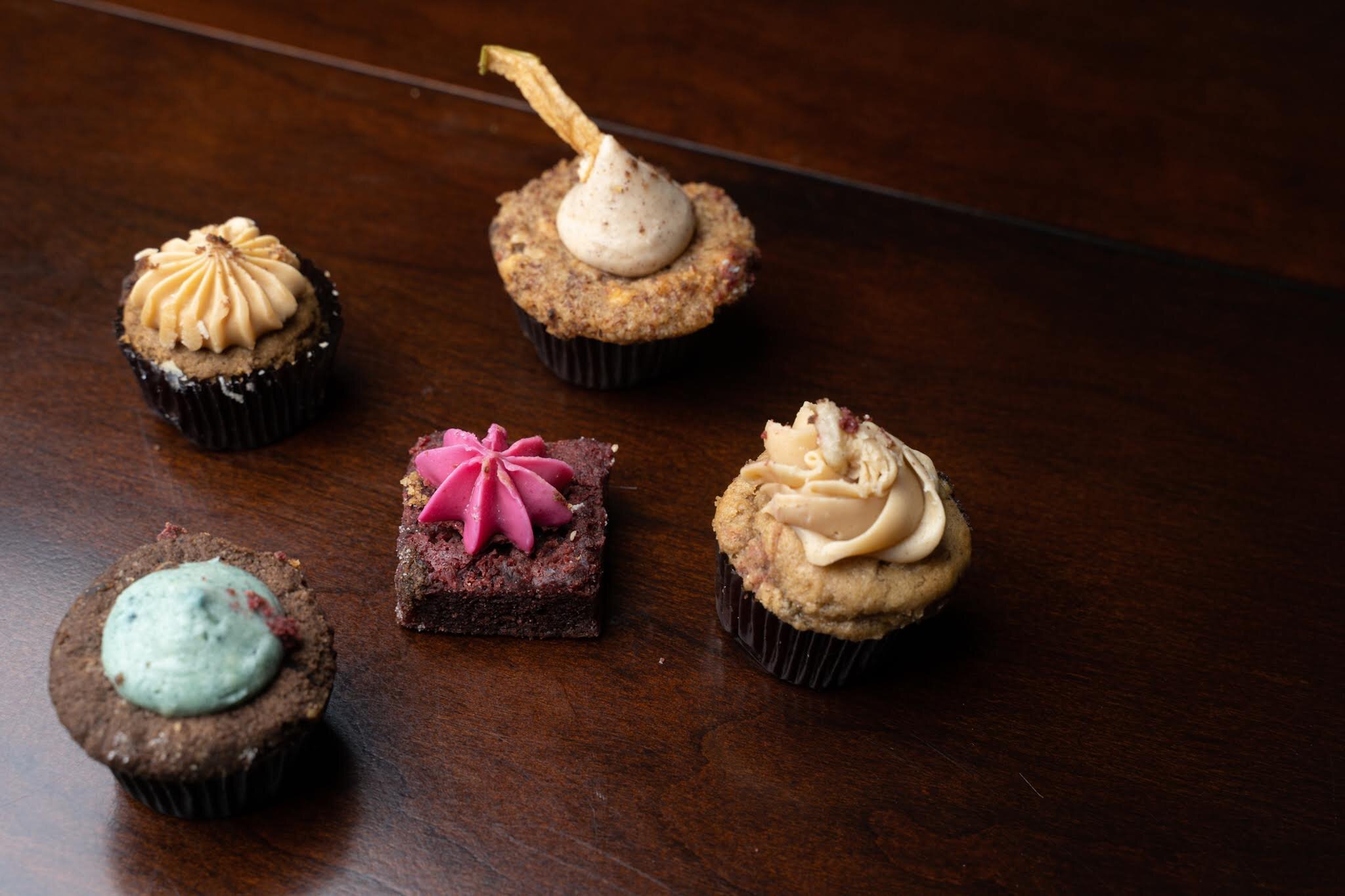 “And, lo and behold, people did want treats that were sourced responsibly. What’s happened since then has been amazing.”

Today, the Bruewers run a Farm House Barkery storefront in Newbern, and they sell in retail stores in Memphis, Jackson, Dyersburg, and Covington, Tennessee. They specialize in bone-shaped biscuits with flavors like apple, blueberry, peanut butter, and the Elvis-inspired Hound Dog (with peanut butter and banana).

They’re also known for their Ruffins dog muffins, which Bruewer says are also a hit with humans: “People started eating our Ruffins because they’re sugar-free, and some people have sugar intake concerns.” 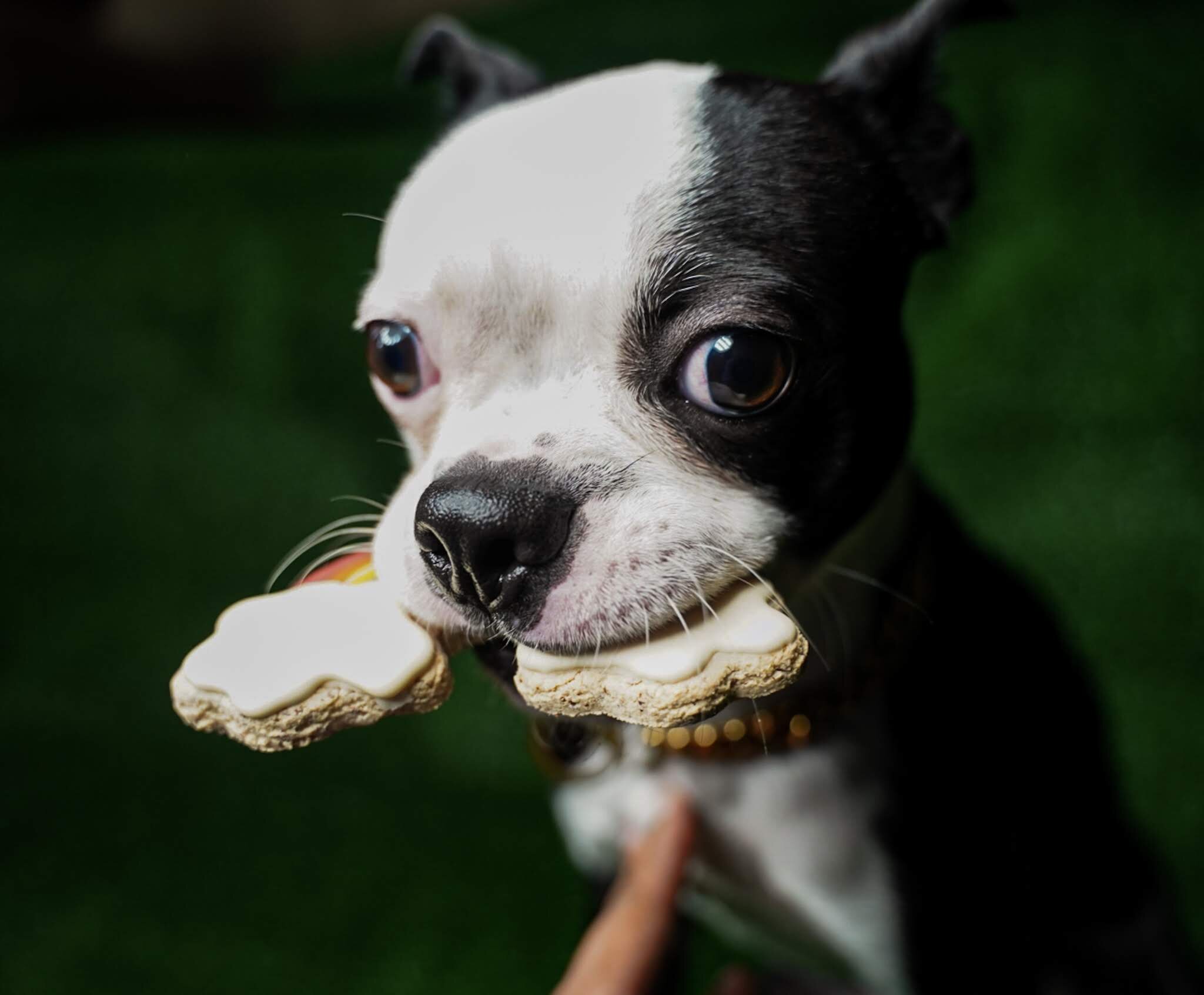 Farm House Barkery’s treats are also salt-free and made from regionally sourced ingredients, such as sweet potatoes from Ripley, Tennessee, and apples from Jones Orchard in Millington.

The Bruewers’ three dogs—McKenzie, Max, and Molly—assist with taste-testing, so the treats are always dog-approved.

They make a sweet potato treat that’s grain-free, but their other treats are made with grains. Bruewer says she hasn’t jumped on the grain-free bandwagon. “These are treats, not food,” she says. “We’re not your dietary source.”

The Bruewers aren’t the only local dog-treat bakers. While their business is focused regionally, the Union Avenue location of Memphis-based Hollywood Feed bakes and packages dog treats to sell in their 103 stores around the country. In 2016, the Union location of Hollywood Feed expanded the store’s footprint and added a full-scale dog bakery. 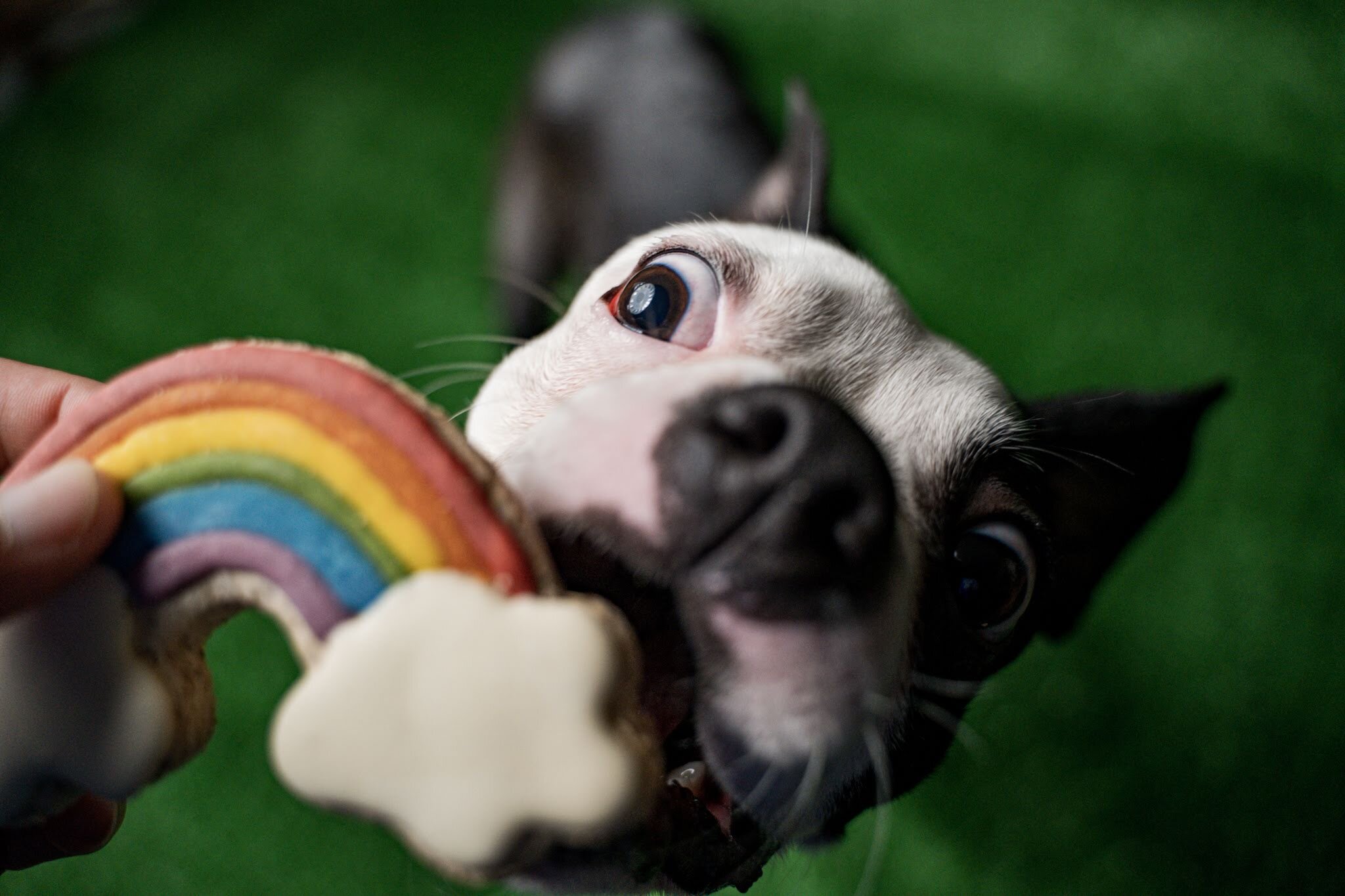 “Initially, when we opened the bakery, we just made pastries for the Union location. The pastries are free of preservatives, and we can only sell them there due to their short shelf life,” says Hollywood Feed co-owner Jean McGhee. Pastries include breakfast donuts (topped with chopped bacon), carob mint cupcakes, cinnamon rolls, and quiche bites—all made with natural ingredients and no refined sugar or wheat.

The recipes were created by master pastry chef Sarah Nicholson, who McGhee says was challenged with creating wheat-free, human-grade treats for dogs.

“All of her training had been with flour and sugar, and we hired her and said, ‘You can’t use flour or granulated sugar.’ But she was able to come up with recipes using almond flour and coconut flour and maple syrup,” McGhee says.

The Hollywood Feed Bakery also fills special orders for custom dog cakes. The six-inch cakes are decorated with all-natural colors, and McGhee says they’ll write any message so long as it fits on the cake.

Though the pastries and custom cakes are only available at the Union Avenue store, the bakery has since expanded their operation into creating shelf-stable treats for all Hollywood Feed locations. Those shelf-stable treats include decorated, iced cookies in seasonal designs. 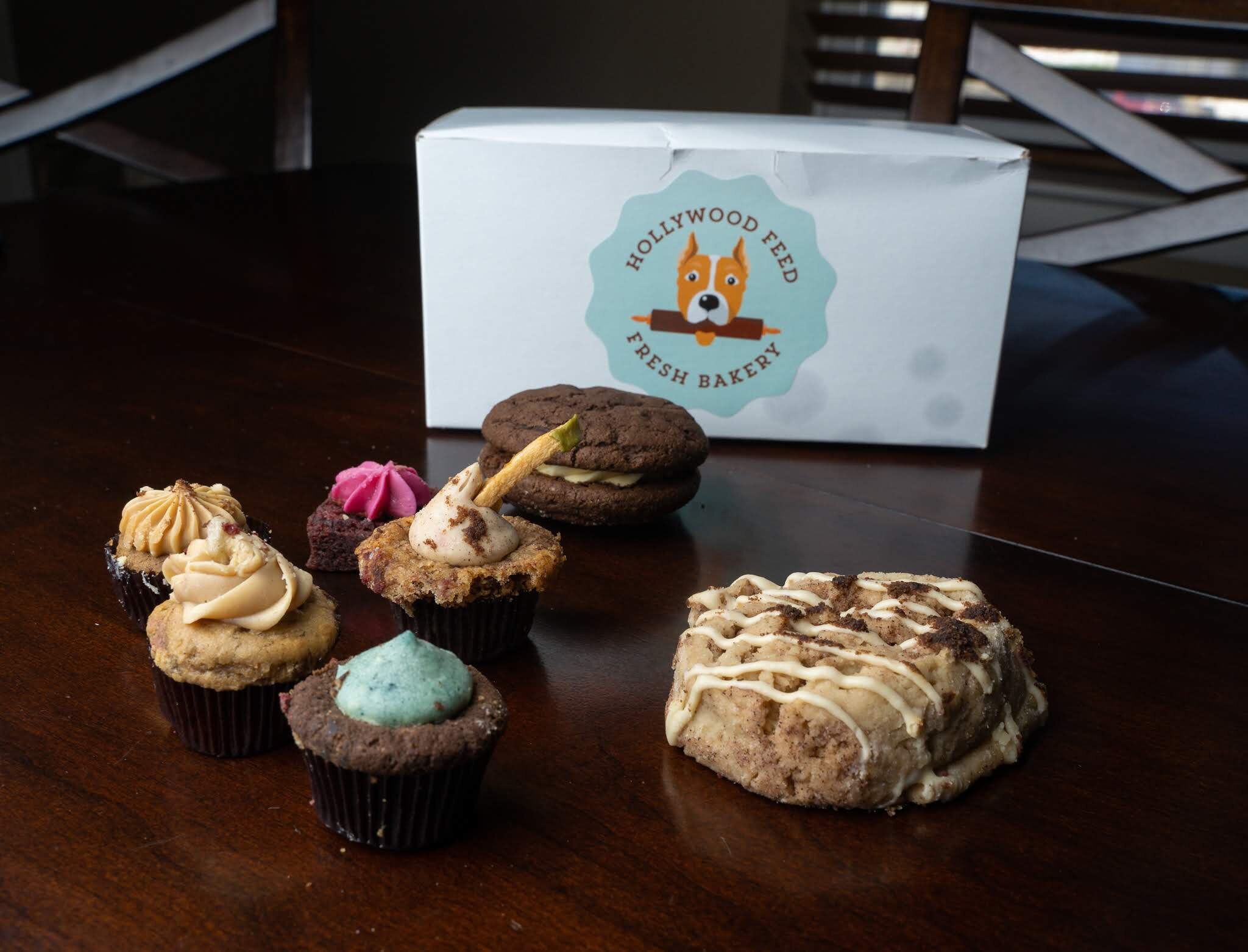 “We try to keep to minimal ingredients with no artificial colors or flavorings, and we use natural ingredients to create colors for the frosting,” says McGhee.

For example, the black icing is made with a mixture of spirulina, beet powder, and turmeric.

Hollywood Feed also bakes dog biscuits to package and sell at all of their locations.

“The biscuits stay close to our Southern heritage with flavors like chicken and waffles and the Memphis recipe, which is peanut butter, banana, and bacon,” says McGhee. 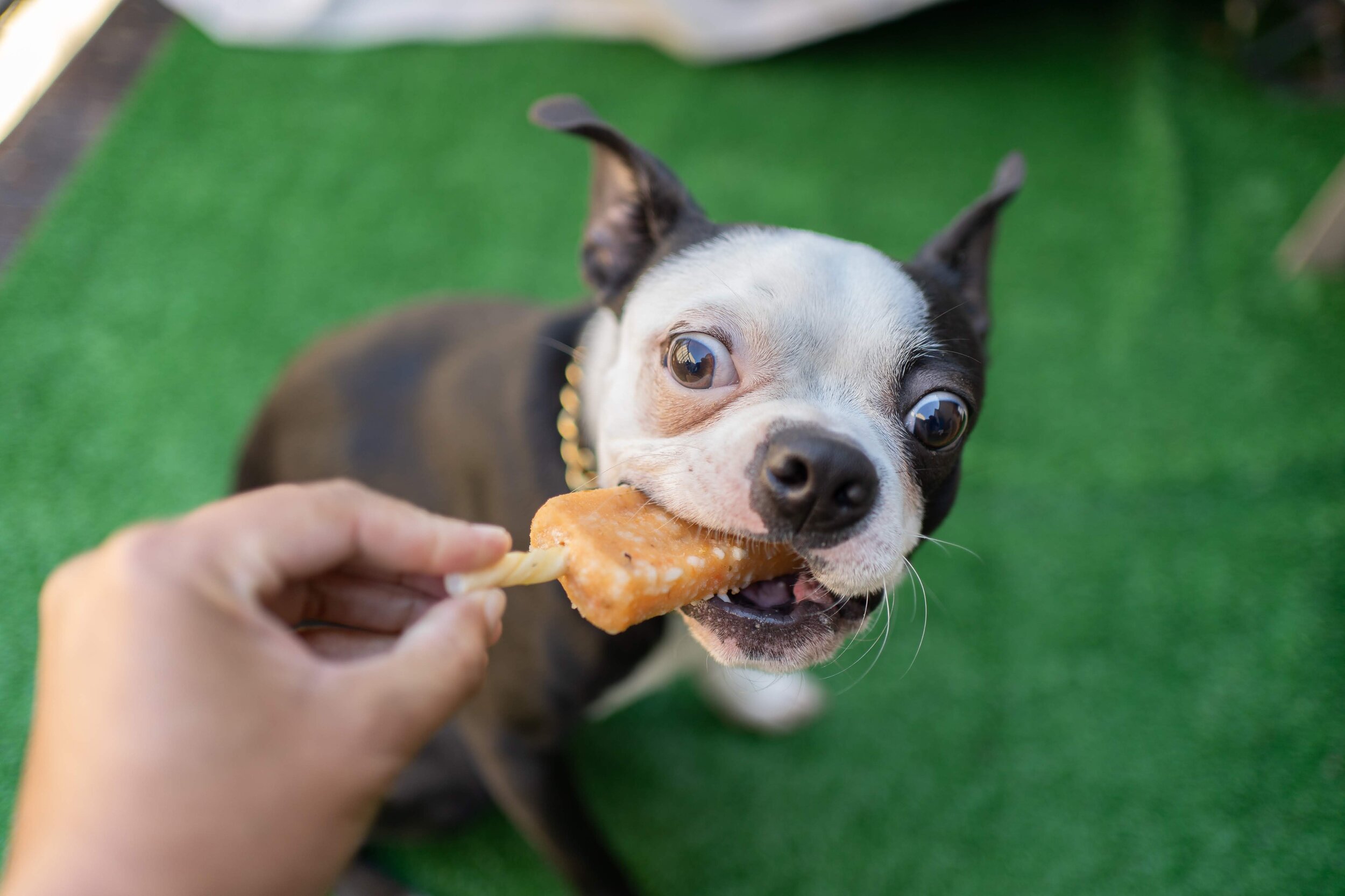 Biscuits, cookies, and dog muffins are great treats for any time of year, but during the hot Memphis summers, pups might rather cool off with pupsicles from MEMPopS. Unlike MEMPopS’s fruity and creamy ice pops for humans, the pupsicles are made with savory ingredients, like chicken stock, roasted sweet potatoes, carrots, and brown rice—molded and frozen onto a rawhide stick.

“People were coming in and buying regular pops for their dogs, so we thought, ‘Let’s just make a dog popsicle,’” says MEMPopS owner Chris Taylor. 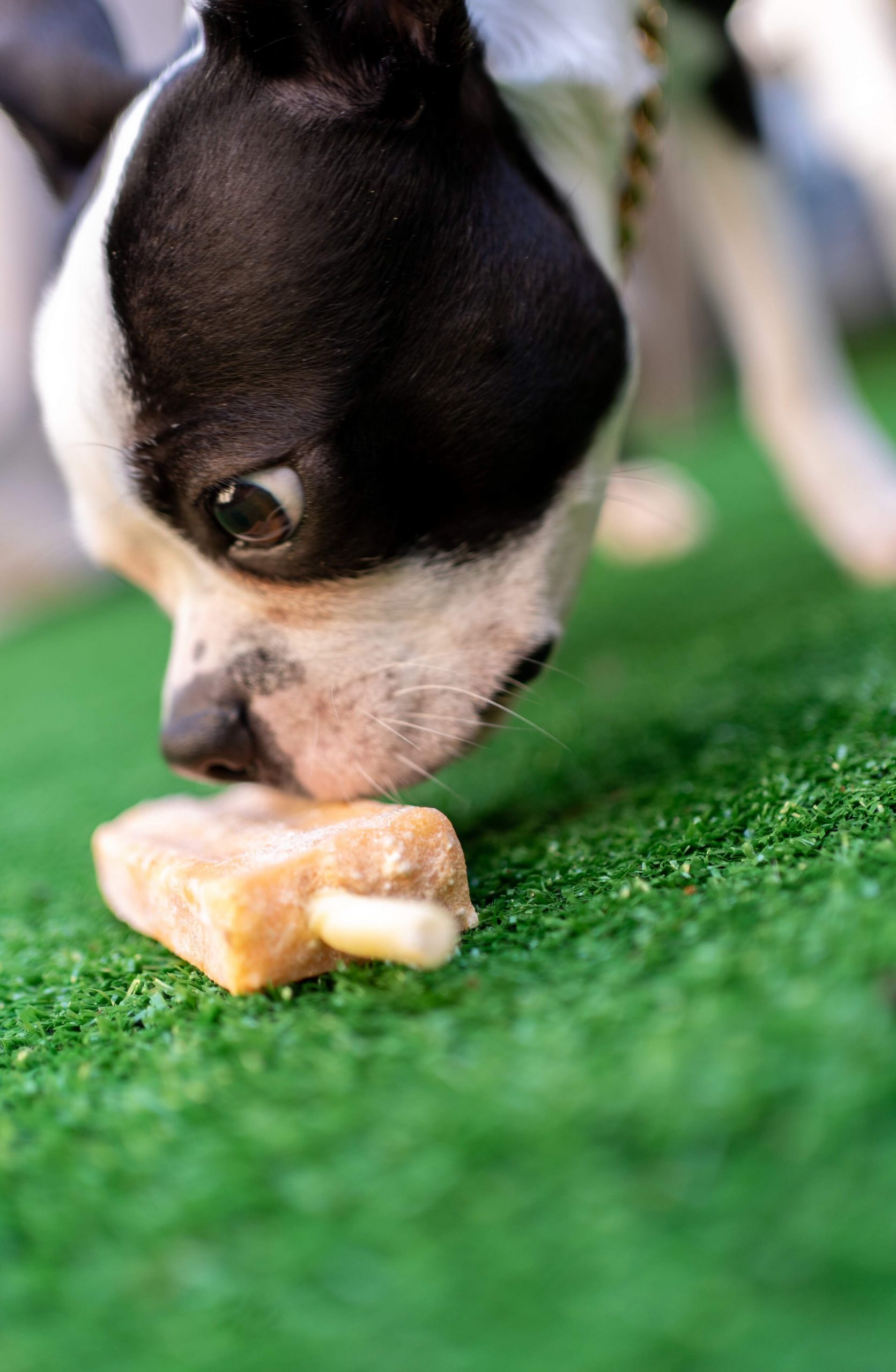 Taylor first experimented with using a regular popsicle stick but says he quickly realized that dogs would try to eat the stick, which could splinter. That’s when he got the idea to use rawhide in its place.

People bring their dogs into the dog-friendly Crosstown Concourse MEMPopS location just for the dog pops, says Taylor. Memphis Animal Services (MAS) often brings dogs into the building on foster field trips (when they take dogs out to explore the city and meet potential adopters), and those shelter dogs get a special discount on dog pops at MEMPopS.

The pupsicles are available at MEMPopS retail locations. You can also find them at MEMPopS mobile units or get them delivered free with orders of 10 or more pops (you can mix and match pops for humans and pups). 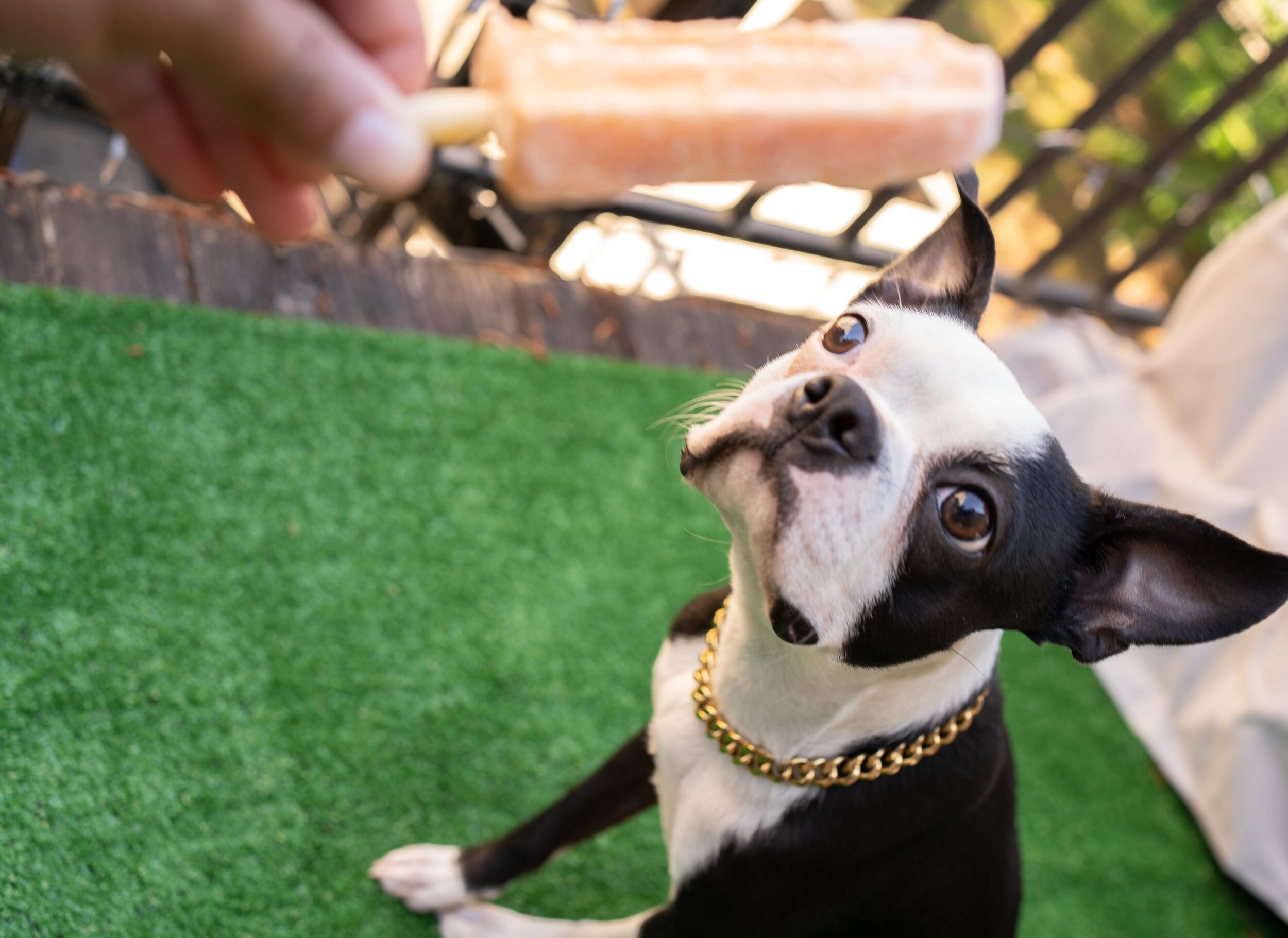 When dogs are in the mood for a good local brew, they have a couple of options. Local dog treat makers BrewBakers Barkery make all-natural treats using spent beer grain from local breweries.

“They would just be dumping them, so we go by and bring a five-gallon bucket. They fill it up for us, and we go on our way,” says Meg Bender, who co-runs BrewBakers Barkery with her brothers Jeff and Nick Ayers.

Bender had been making dog treats at home for her own dogs for some time. But when Jeff picked up some spent-grain dog treats at a festival he attended, the siblings got the idea to try their hand at baking spent-grain treats commercially.

Their bone-shaped treats come in a variety of flavors, such as Memphis BBQ (made with smoked pork shoulder), smoked turkey, bacon cheeseburger, bacon, cheddar cheese, and peanut butter. The ingredients are always all-natural, and they use as many organic and locally sourced foods as possible. They even have a CBD treat made with CBD sourced from Southern Hemp.

“Fargo even goes nuts over the spent beer grain in the bucket when we bring it home. He’ll eat anything,” she says. 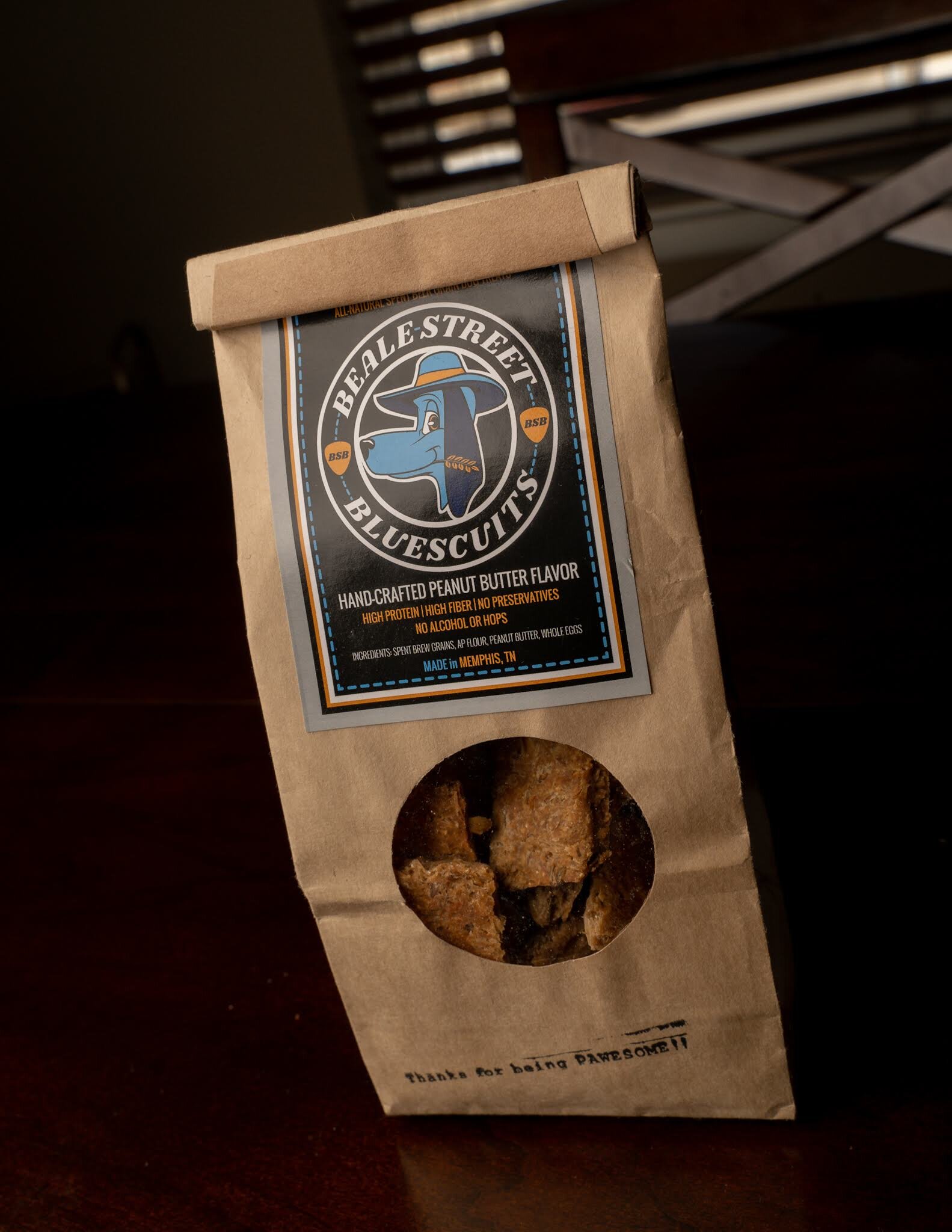 Beale Street Brewing Company is currently contract-brewing beer out of a local facility while they search for their own building. Their cans hit grocery store shelves this spring, just as the pandemic was starting. But long before he started brewing commercially, Kolheim was experimenting with homebrewing, and he was left with several pounds of spent grain with every batch of beer. 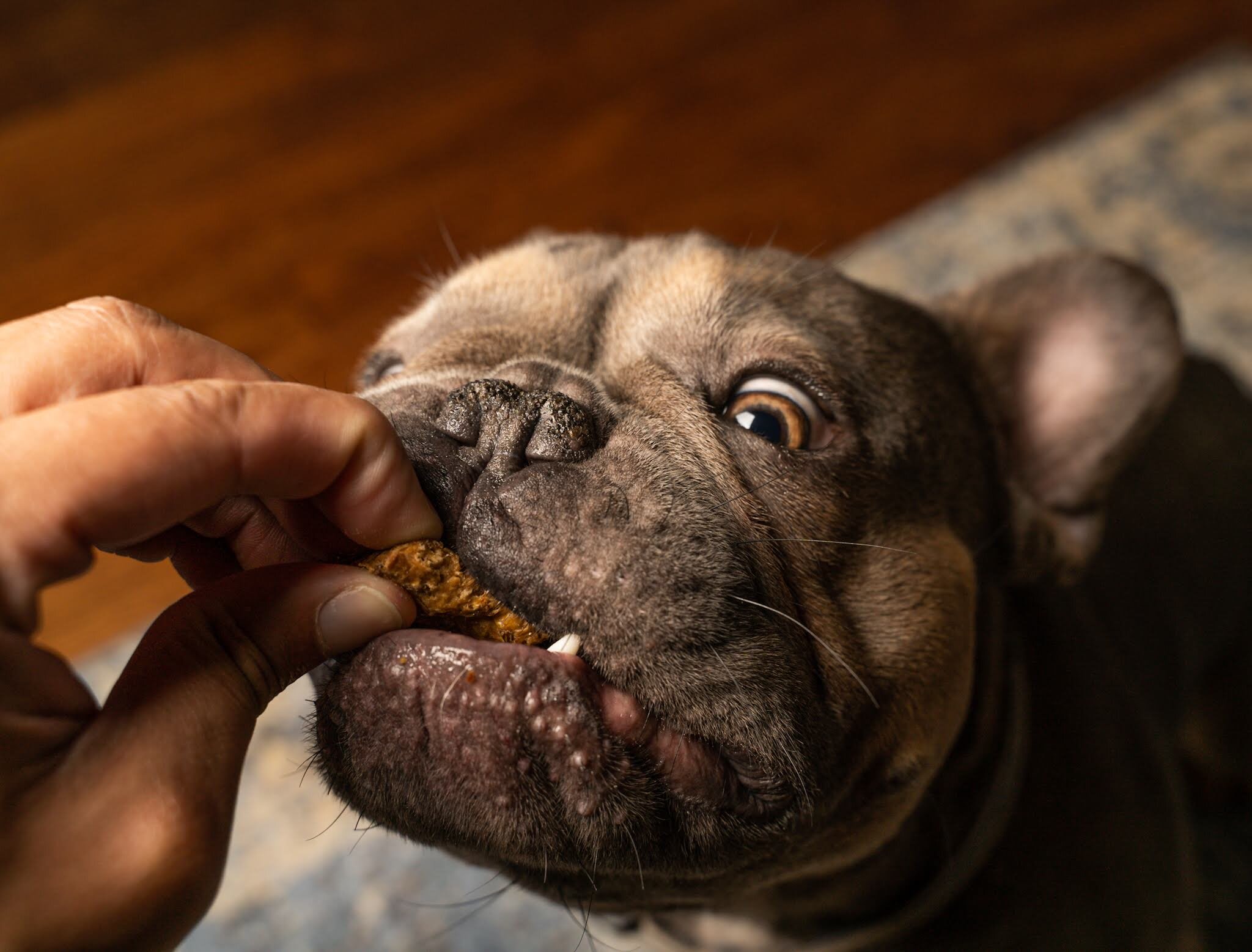 “I saw some spent-grain dog treats for sale at a brewery in Nebraska, so we started playing with developing our own recipe,” Kolheim says. “We tested them on the family dogs—Miles and Biggie Smalls — and they went nuts for them. There is so much grain leftover, and you hate to throw it away.”

“We typically give the treats away because we like making dogs happy,” Kolheim says. “But once our [taproom] is up and running, we’ll sell them there.”

Beale Street Brewing also partners with local groups to teach them how to make dog treats. In early February, they worked with a group of students from St. George’s Independent School on their Permaculture Day of Service to bake and package 100 pounds of dog treats made with the spent grain from the brewing company’s first official batch of beer. The students then donated the treats to the Humane Society of Memphis and Shelby County and The Savior Foundation. Students each took home a bag of treats as well. 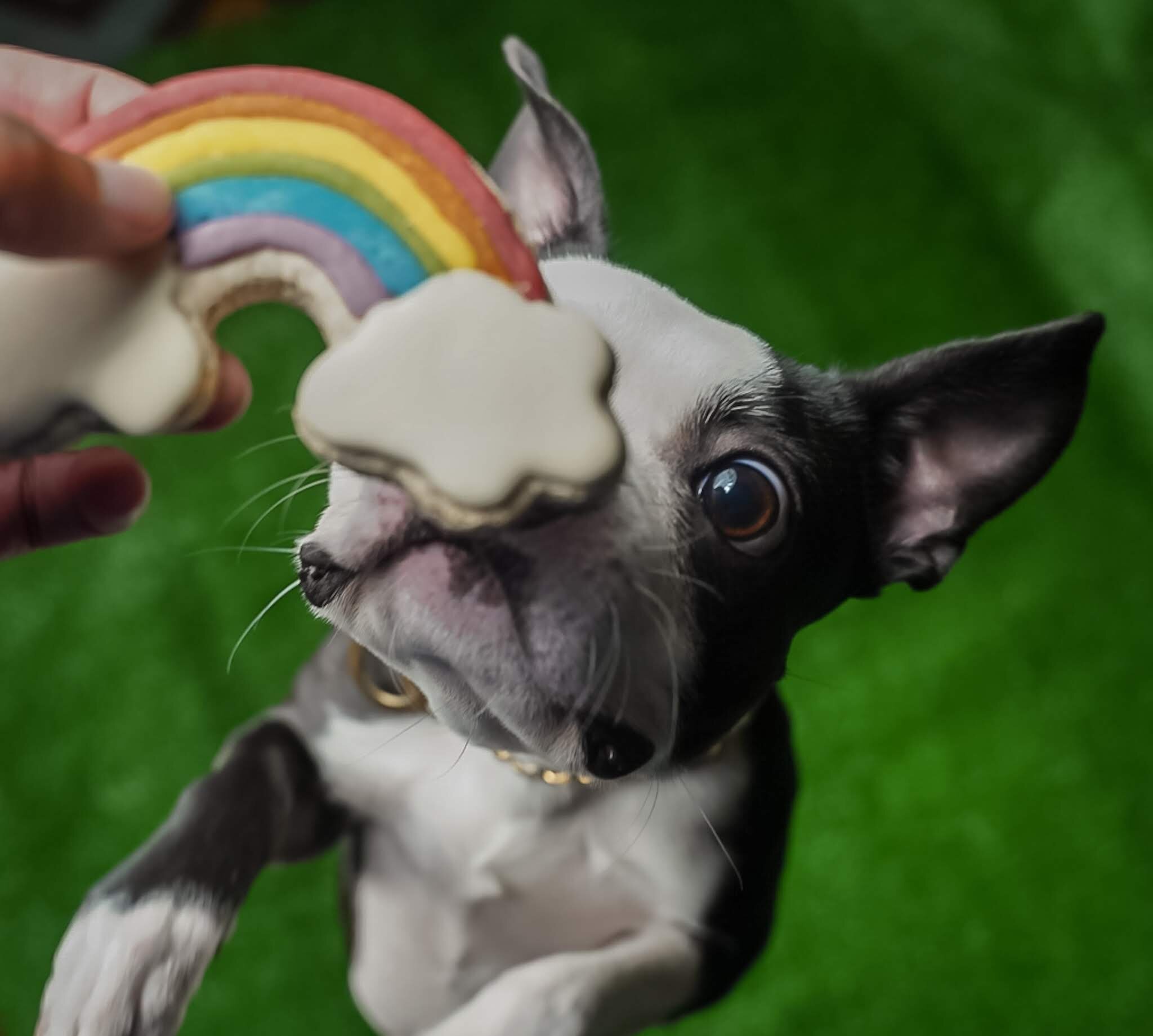 Get your paws on them

MEMPopS: Available at retail locations and mobile units and for free delivery with orders of 10 or more pops (you can mix and match pops for humans and pups)

Bianca Phillips writes about vegan food (and shares images of everything she eats) on her blog, Vegan Crunk. She’s the author of Cookin’ Crunk: Eatin’ Vegan in the Dirty South. By day she works as the communications coordinator for Crosstown Arts/Crosstown Concourse. She and her partner, Paul, are the proud parents of five cats and one very stubborn (but adorable) pit bull. @biancaphillips

Taking It to the Streets