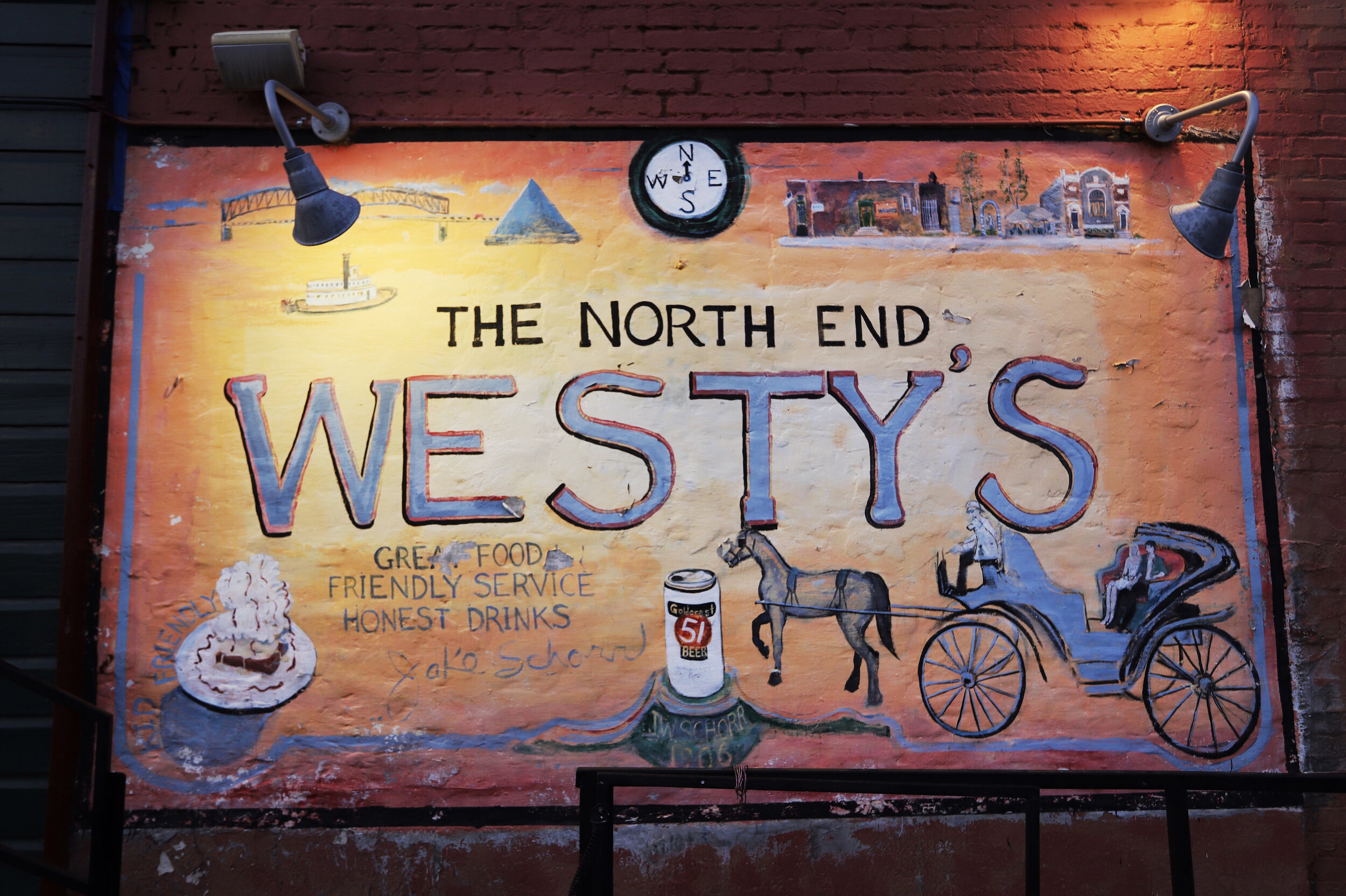 So goes an admonishment from Westy’s owner Jake Schorr, as I started off my conversation with the restaurateur whose brusque exterior actually hides a swirl of contradictions. Because when you talk to him about Westy’s, his dive bar that’s been a fixture of downtown’s north end for almost 36 years now and where you’ll find 227 items on the menu, there’s a kind of sweetness to his attitude about it all (“I’m one of the luckiest human beings in the world”). He can’t do this forever—he knows he can’t—and yet his is a work ethic that belies his 77 years, which still sees him putting in a couple hours every day, seven days a week (“I’d love to get back to 10 hours”).

Which is also related to the way he’ll stress to you how hot under the collar he still gets when his beloved bar—where the attraction is simplicity, the uncomplicated fare and attentive service—doesn’t get the basics right. He hates, hates when the place falls short. Nowhere, nothing and no one are perfect, but god—he can’t stand it when Westy’s ain’t.

All of which may help go a long way towards understanding why this hole in the wall with the kitschy art hanging inside—and which promises “Great food, honest drinks and free Wi-Fi” on a homemade sign on the window outside—managed to hit the 35-year mark back in December. Yes, friends, it was back in December 1983, at 10:45 in the morning, when the doors first opened at this spot where Jake and company went on to pull off a series of improbable feats for a small, neighborhood restaurant—keeping the doors open, the lights on, the grill hot, the customers happy. 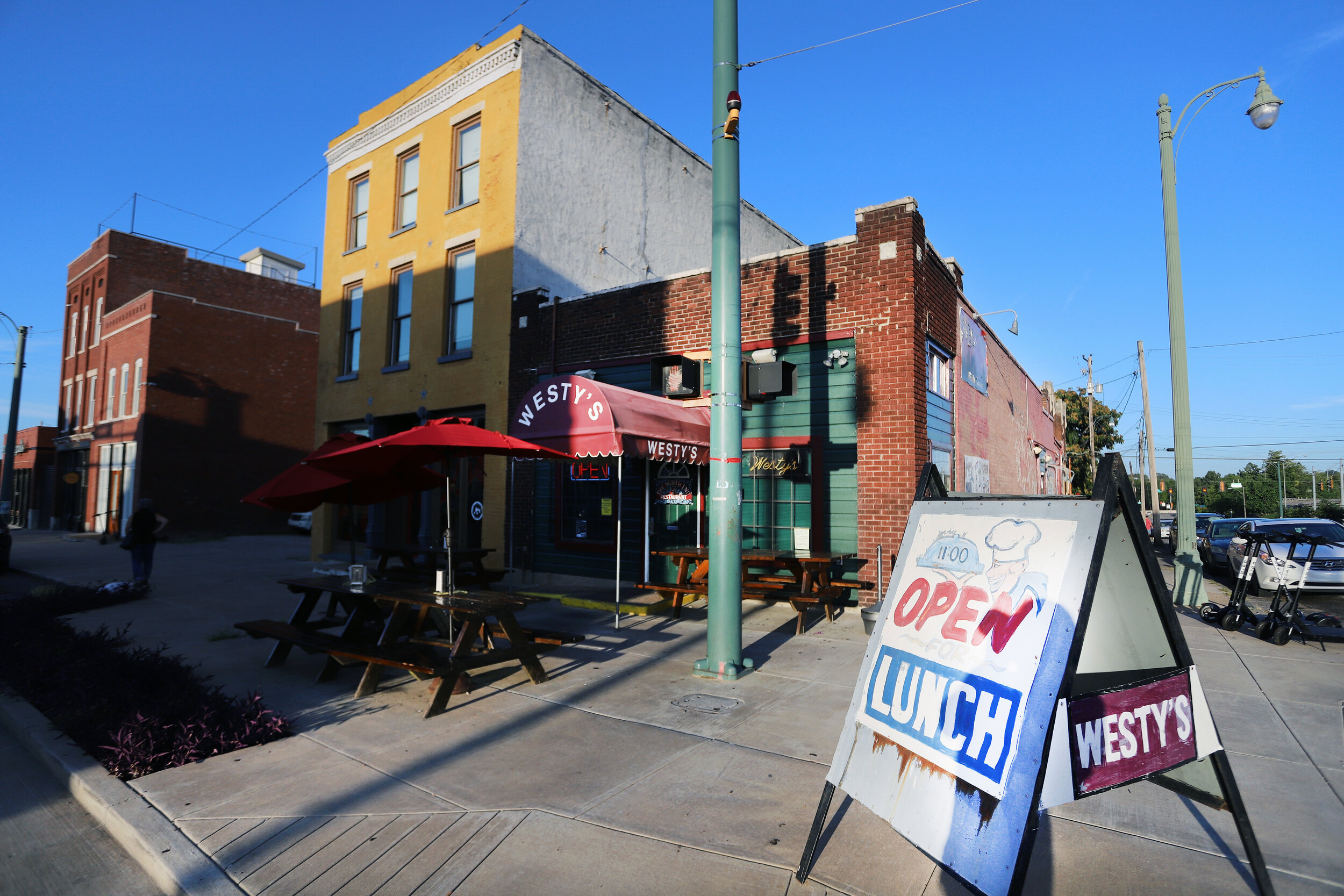 I thought I worked for a living, until I met this no-frills, straight-talking keeper of a bar that’s irony-free and as old school as it gets—a man who refuses to die, quit, slow down or retire.

The formula is simple. Give him your tired, your poor, your hungry masses, yearning to eat free of anything that looks nutritious.

And to think, this all started by accident, as Jake explains it.

“Here’s what happened,” he ruminates.

“I always say, I got tricked.”

One might be tempted to scratch one’s head at a statement like that, but it goes back to that story Jake mentioned at the outset that he says it’s easy to get wrong, thanks to its byzantine twists and turns. The ridiculously short version: The proprietor of Westy’s actually ran a stereo and commercial sound business once upon a time, before he ever dreamed about opening a place where people would leave with grease on their chins and fingers instead of shiny consumer electronics in their arms. 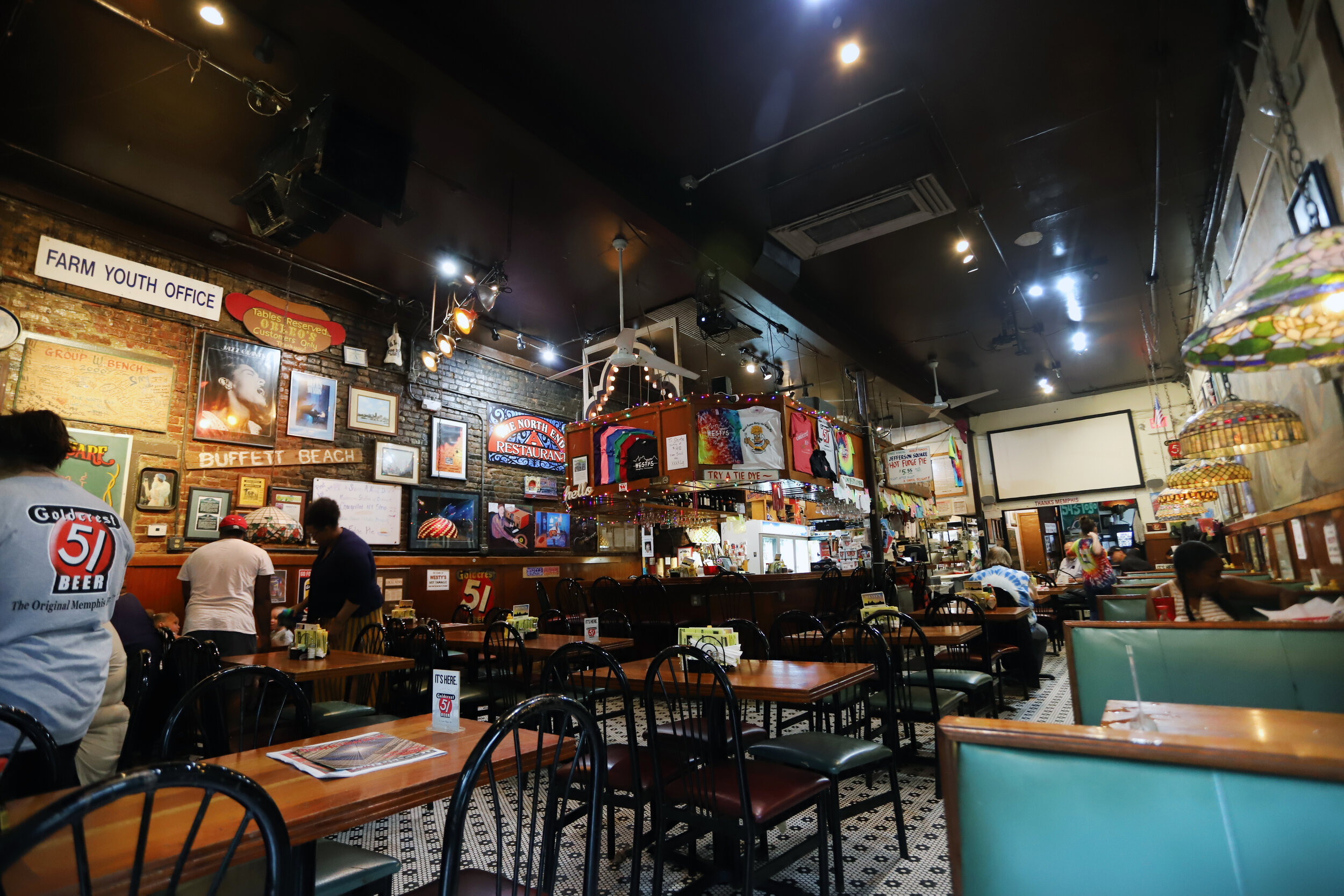 Jake’s friend had gotten involved with a restaurant downtown and eventually decided he wanted Jake to come lend a helping hand. “I finally did,” he says. “I came to look at his business and just said, ‘Give me a stereo, give me some amplifiers, I can sell it. I can market it. But I have no idea how to think like a restaurant.’” Nevertheless, he did the whole “roll up his sleeves” routine and dived in. He dabbled, trying his hand at every job in the restaurant until he got a sense of how it all fit together, how everything worked. Then he stepped back and said—OK, I’ve got it now.

“And that’s how it happened.”

What’s interesting about a place like Westy’s is how its longevity doesn’t exist in a vacuum.

Jake’s and Westy’s story, in other words, very much runs in parallel with that of downtown, and how it’s ebbed and flowed through the years.

Jake and his friend opened their cozy establishment (originally called The North End, which is what it also still says on the front door) at a time when an exodus to the east and on out to the suburbs had decimated downtown. He was here when the Pyramid opened, closed and opened again, and the last protracted shutdown of the Main Street trolley probably cost Westy’s, Jake estimates, a quarter million dollars in lost business. No man is an island, and neither is his small business. 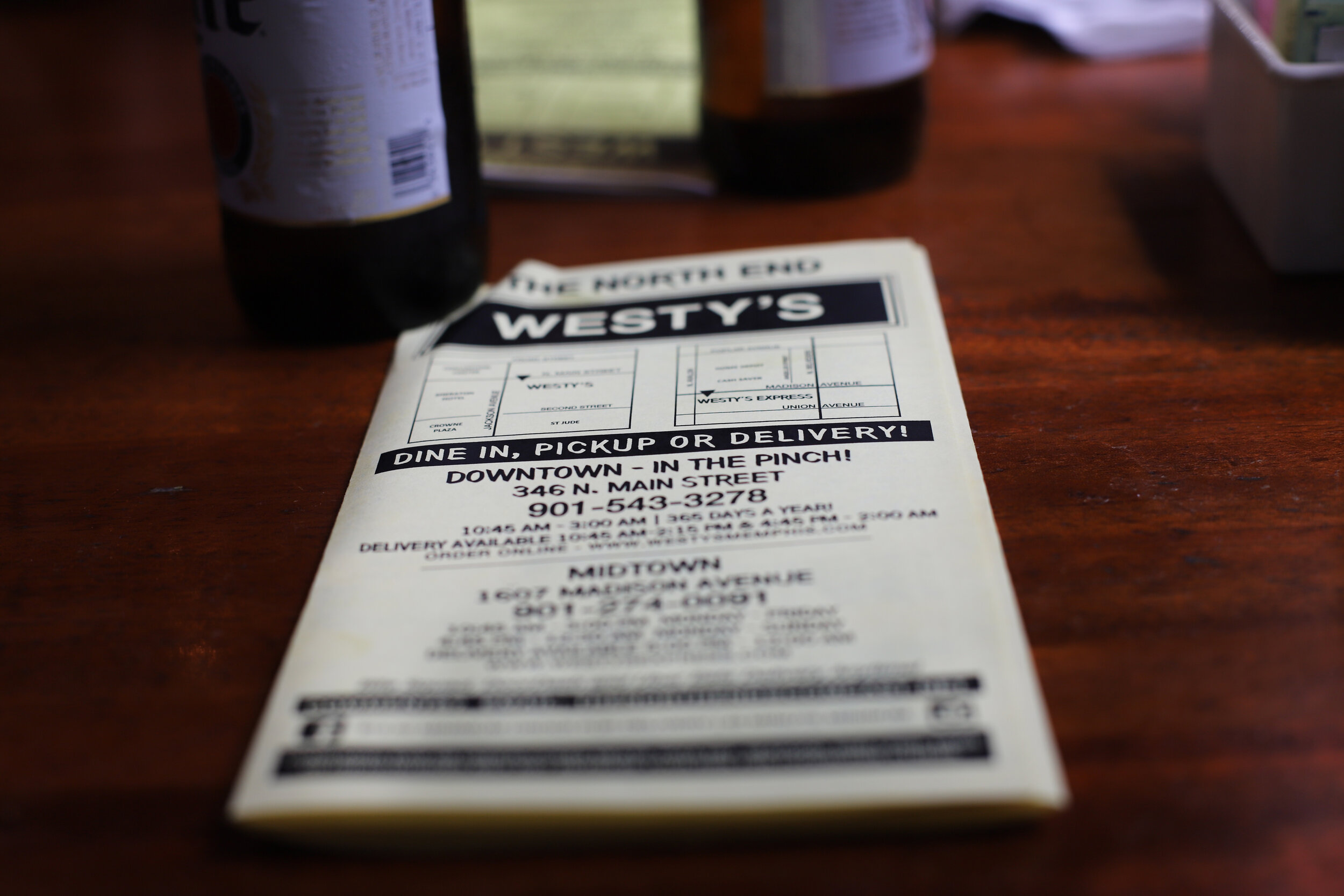 Part of the reason it and he held on so long has to do with a stubborn kind of love for downtown and for Memphis.

Love of this part of the Bluff City, in fact, was a chip implanted in Jake early; he spent a good bit of his childhood downtown and exploring landmarks like the Tennessee Brewing Company, which his great-grandfather founded in 1885.
A recent dinner hour at Westy’s reflected a typical nighttime crowd. Some tourists, some downtown residents and plenty of workers in the Westy’s T-shirt pirouetting from one table to the next in the time-honored ballet of the food service industry. 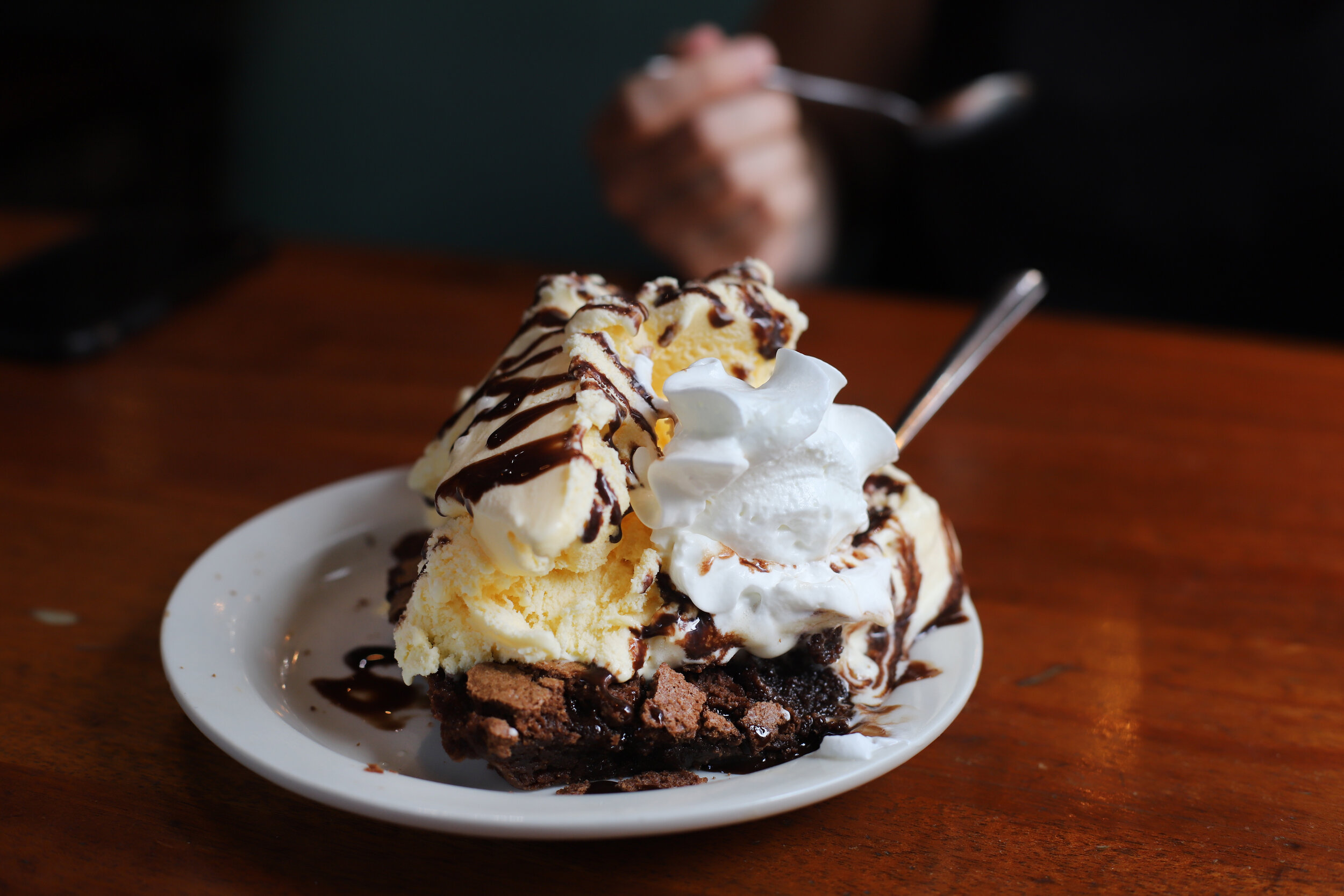 Scene: A waitress ferries two slices of hot fudge pie, one in each hand Lady Justice-style, past a group of diners who eye the desserts lustily.

“Just a reminder of what you could have,” she teases, as she makes her way to a different waiting table. The soundtrack of dive bars everywhere blares from the speakers. We’re talking tunes like “Bennie and the Jets” and “Jessie’s Girl.” Outside, the sound of clops as a horse-drawn carriage rolls down Main Street at a languid pace.

St. Jude Children’s Research Hospital sits practically in the bar’s backyard. Families of patients regularly stop by. The kids, appropriately, are fawned over, with some of them even lucky enough to have their drawings hanging up inside.

It’s nice that the Pyramid is busy again, even if it’s a different kind of busy—retail, thanks to Bass Pro, instead of concerts. Westy’s doesn’t see the same kind of spillover business anymore, but when you run a bar for a living, you take what you get.

“I was there long before the Pyramid. It came and went. Came back. Whatever… There’s been a couple other restaurants around me, and there’s one across the street—he’s a good guy.

“I like what I’m doing, and my business is designed to stand on its own two feet. Some years are hard. Some years are not. I welcome people and talk to people from time to time. I’m happy to tell anybody whatever they need to know based on my experience.” 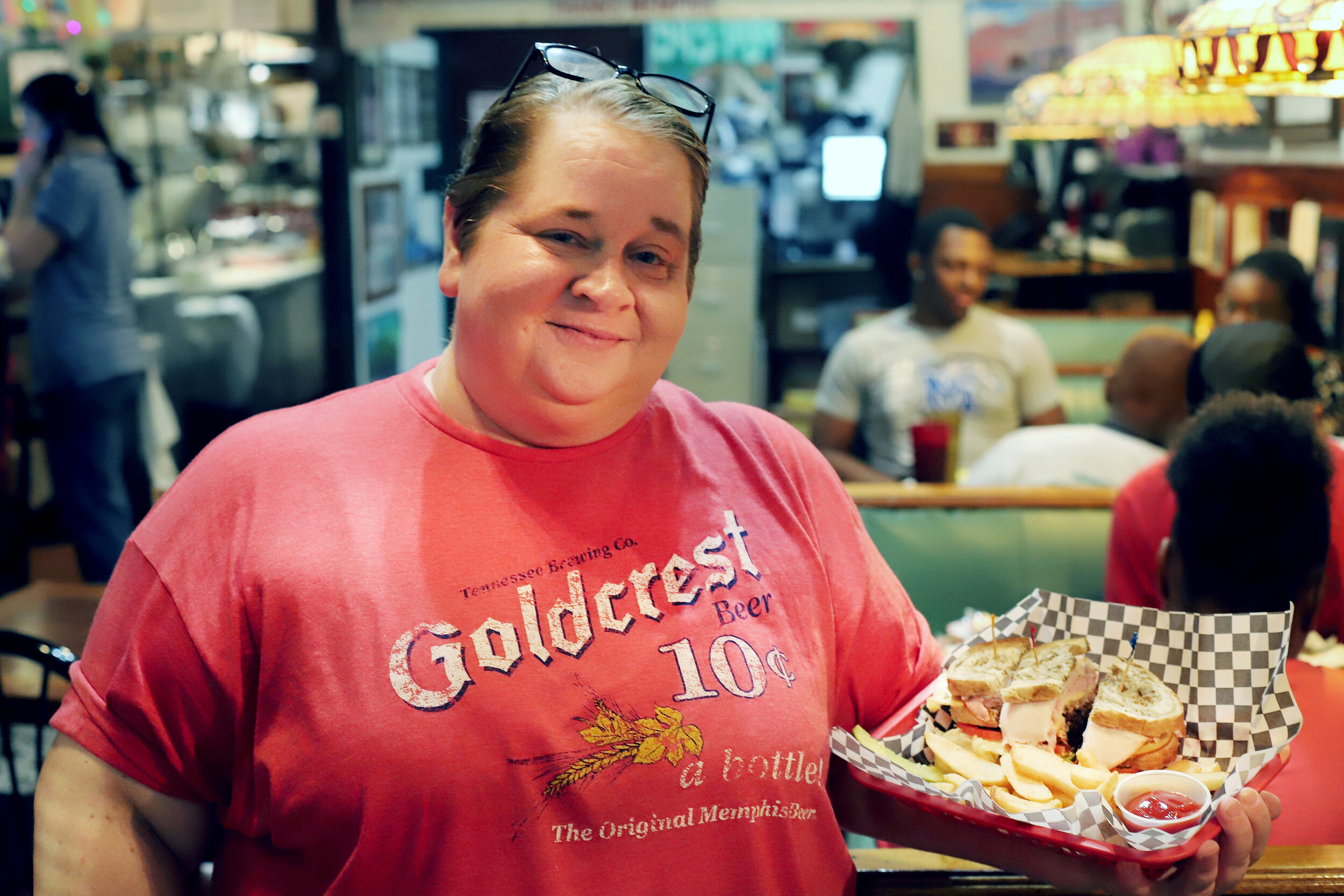 If you had to wager, it’s a pretty sure bet Westy’s is liable to still be standing here for another 35 years, a hipster-free throwback no matter what else is happening around it downtown. The crew will still be feeding diners, feeding the growth of The Pinch—and quite literally feeding the hungry, as Westy’s does at Thanksgiving and Christmas for the homeless.

For a few hours on the holidays, volunteers will serve a free meal to whoever needs one. It’s thanks in part to a partnership with Lindenwood Christian Church.

“Some friends at church asked me to help; we just started feeding people and it grew,” Jake explains about how the free meal initiative got started. “I’m just the center of the hub—of a lot of volunteers and many members of this church stepping up to the plate.

“We ask for donations, we take cans of food, and if somebody has leftovers, we’ll cook it, prep it the night before and start early the next morning. We do from 800 or 900 to 1,400 people. You can come in, sit down and we’ll feed you. I don’t have rules and restrictions. Our meal is designed based on what we’re able to purchase or what we’ve been donated. If we don’t get enough money, Westy’s foots the bill. But it couldn’t happen without all the people helping.” 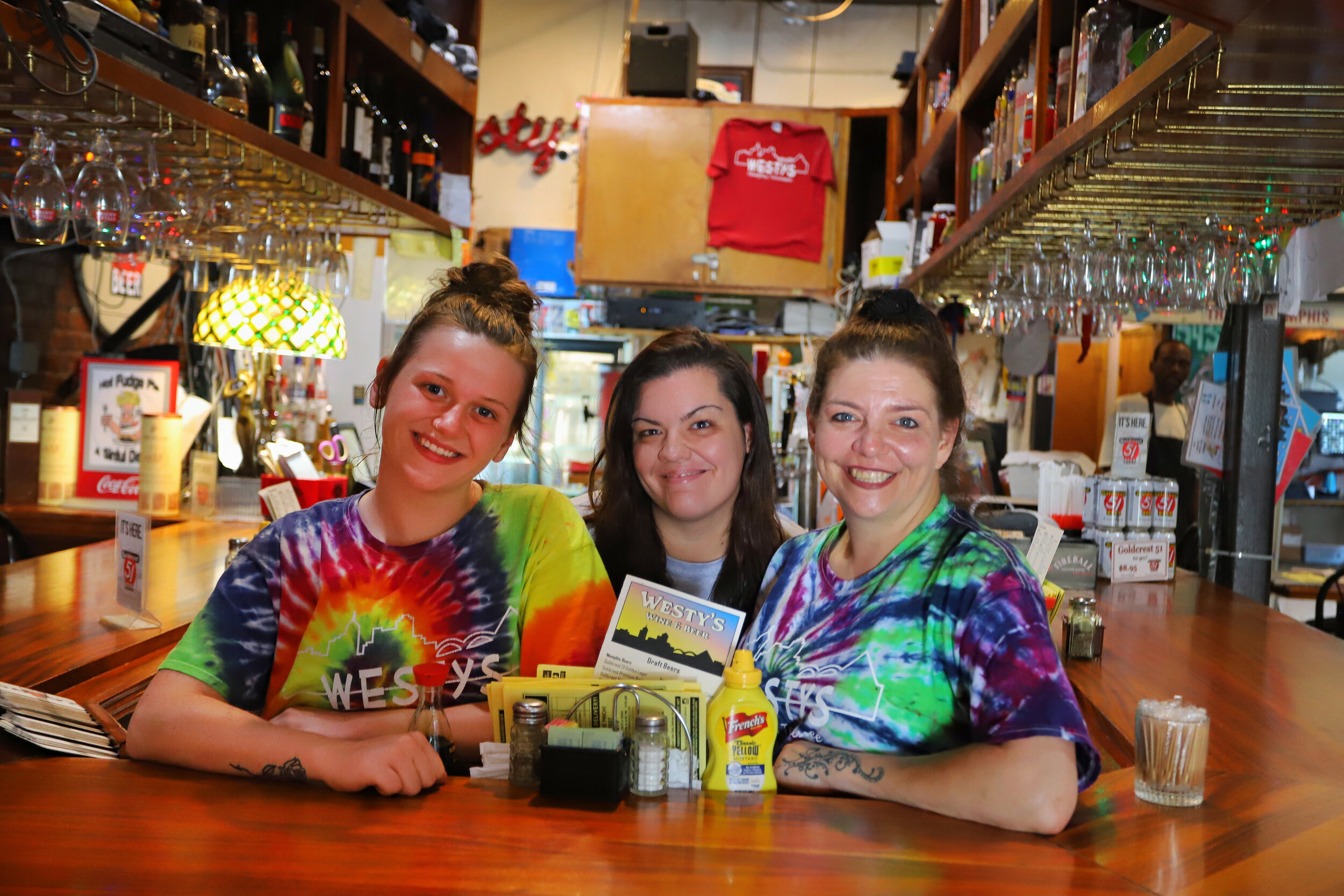 My idea of heaven includes a bar like this somewhere in the vicinity. Westy’s, like all good holes in the wall, is a refuge, a port in the storm for journalists, folks on the late shift, cops, tourists, randos, the hungry, the lost, just about anyone. When you’re here, nothing hurts, everything is right, and whether you can drink your fellow patron under the table, you want to be the center of attention or you’re just looking for a place to hide away, all are welcome. And only the patrons with the blackest of souls wouldn’t find something to love about a place like this.

The menu is so extensive, it’s practically a book. It beckons. The Westy’s Jambalaya (smoked sausage, shrimp and chicken) is practically calling my name. Jake is also especially proud of the wild rice. The North End Club Sandwich—it, too, is sublime. When Jake explains that “Westy’s is in and of itself a destination place,” here’s Exhibit A for why that’s the case. 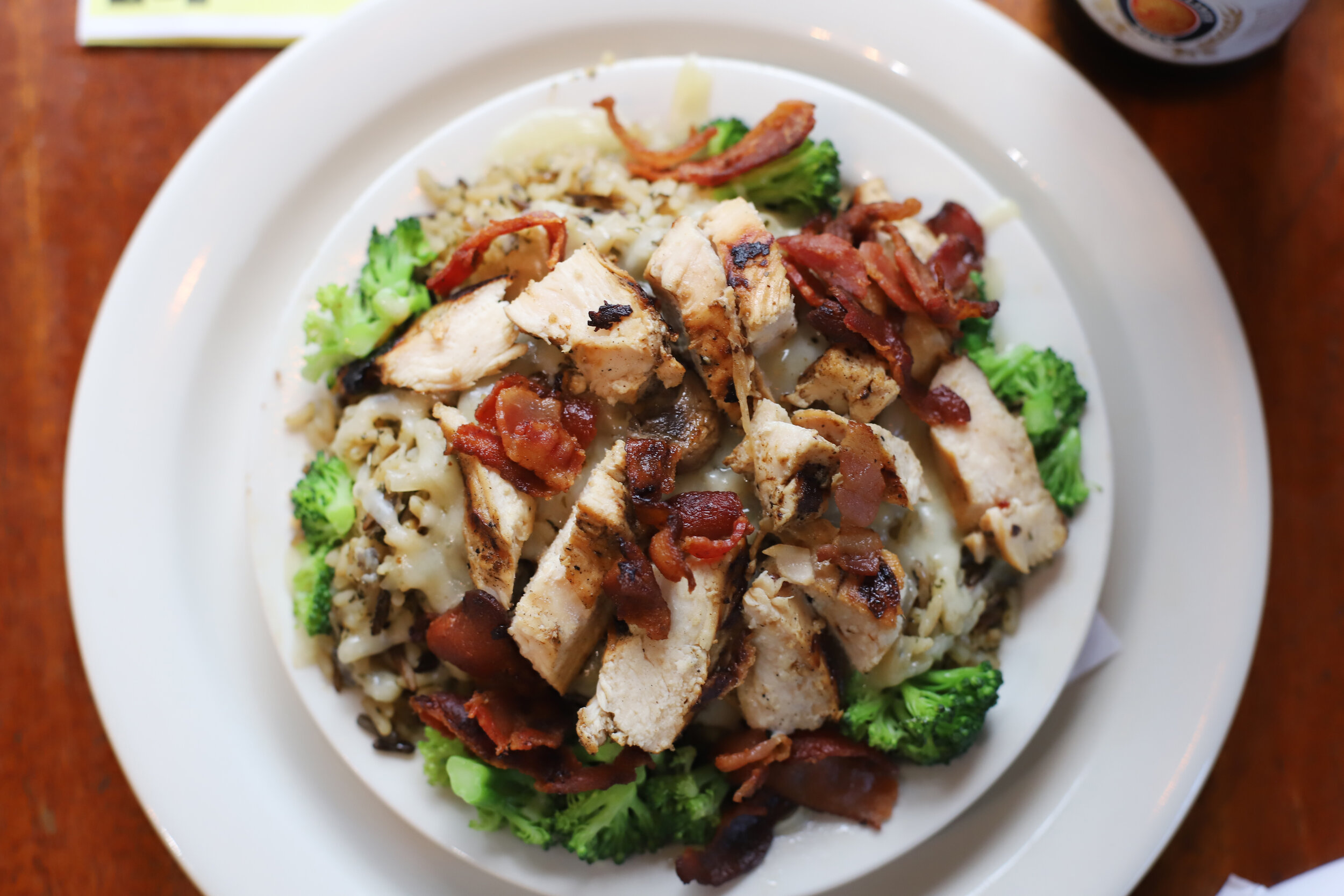 “I like the gratification of making people happy when they eat,” he says.

“It was the same thing in the stereo business. You buy a good stereo, a good radio, a TV or something—and people are happy. I can’t imagine retiring. I’d be so bored.”