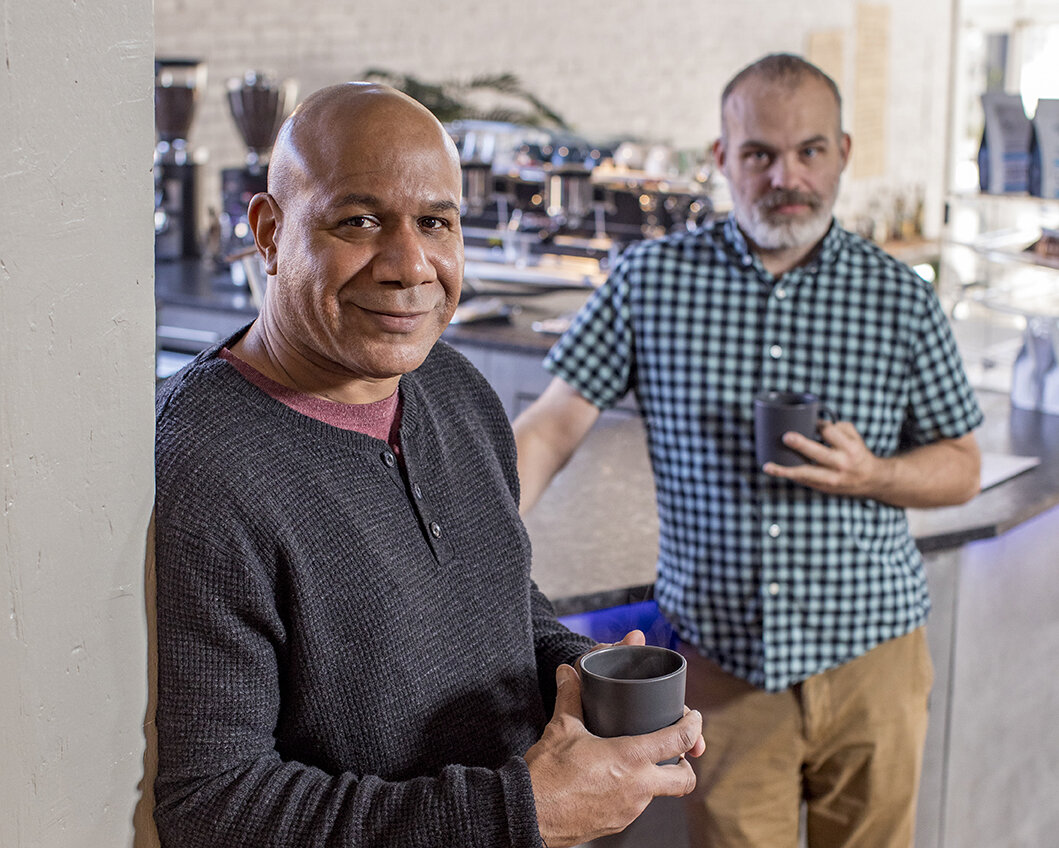 Albert Bean and Charles Billings are a match made in business. Albert owns Dr. Bean’s Coffee and Tea Emporium, and Charles is head roaster and director of operations. Together they create some of Memphis’s finest specialty coffee and tea. Their version of a vanilla latte is a top seller, and seasonal drinks like the Campfire Latte, which uses a bourbon-infused simple syrup (made from sugar, cherry wood-smoked water and bourbon) as its base, continue to wow customers.

Albert’s relationship with coffee began while he was in medical school at Vanderbilt University. What he considered a solution to conquering intense studies turned out to be a way of life and community. 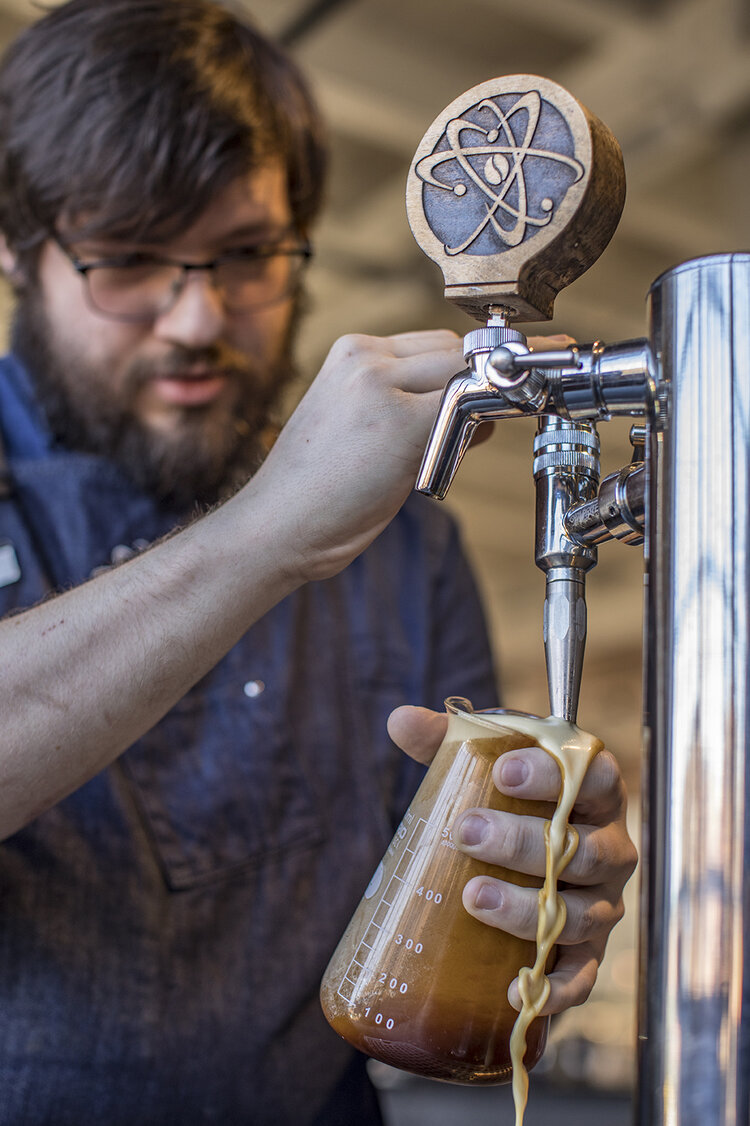 Born in Naples, Italy, Albert was immersed in societal customs as a little lad. Having a military dad, he resided in many diverse places—Hong Kong, the Philippines and both U.S. coasts, to name a few. Having to relocate often taught him to communicate well with people and to find common ground very quickly. While living in Japan, he became accustomed to drinking lots of tea, which carried over into his adulthood.

Although his medical schooling was many years ago, Albert remembers those days vividly, even down to describing his dorm room’s bay windows, plants, little tea set and Japanese table with pillows that once belonged to his parents. A tea drinker at heart, he quickly had to immerse himself into the world of coffee to stay awake to study for his most challenging courses.

This was prior to fancy coffeehouses, when a regular cup of Folgers was good enough.

When Albert’s dad retired from the military, they discussed opening a café, with coffee in mind. The only problem was they knew very little about coffee. “I didn’t know how coffee was roasted or stored,” says Albert. “I just imagined big brown bags, not knowing this was a living thing that just can’t lie around.” The idea was put to rest for a time. 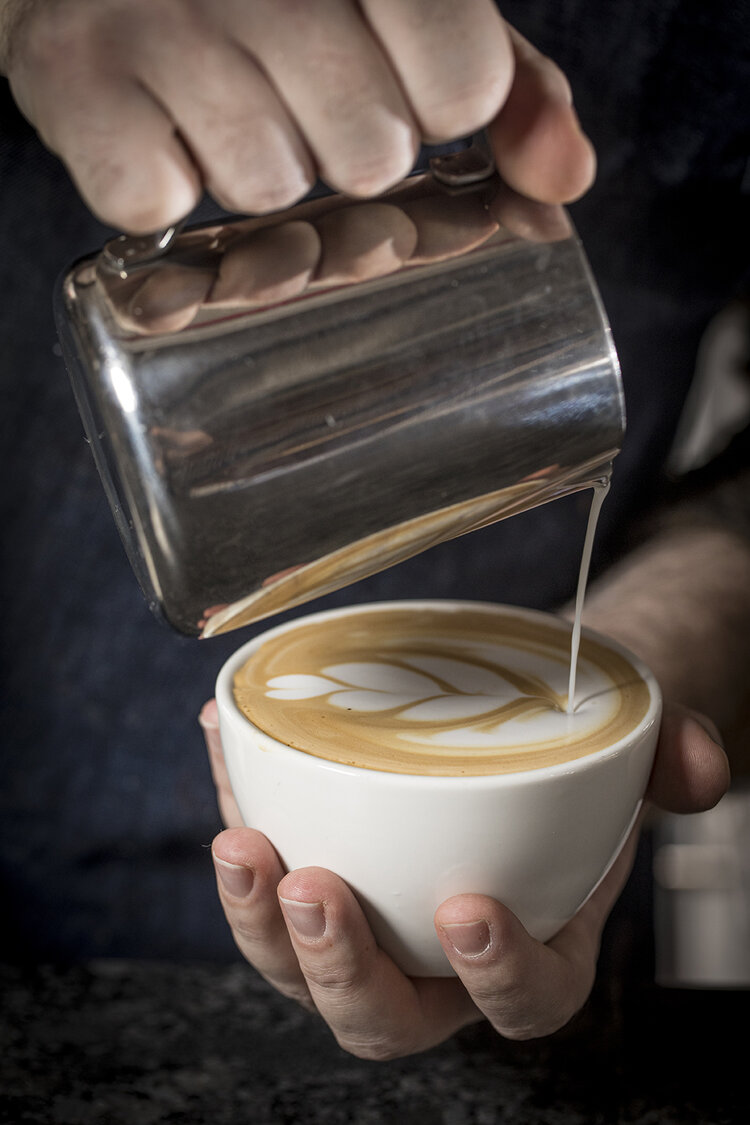 Albert graduated medical school in 1994 and has been practicing emergency medicine since 1998, with both the Baptist and Methodist systems. From sniffles to gunshot wounds, he has been impacted by multifaceted circumstances. “Emergency medicine allows you to see the blessings of birth and, hopefully, the dignity of death—and everything in between,” says Albert. 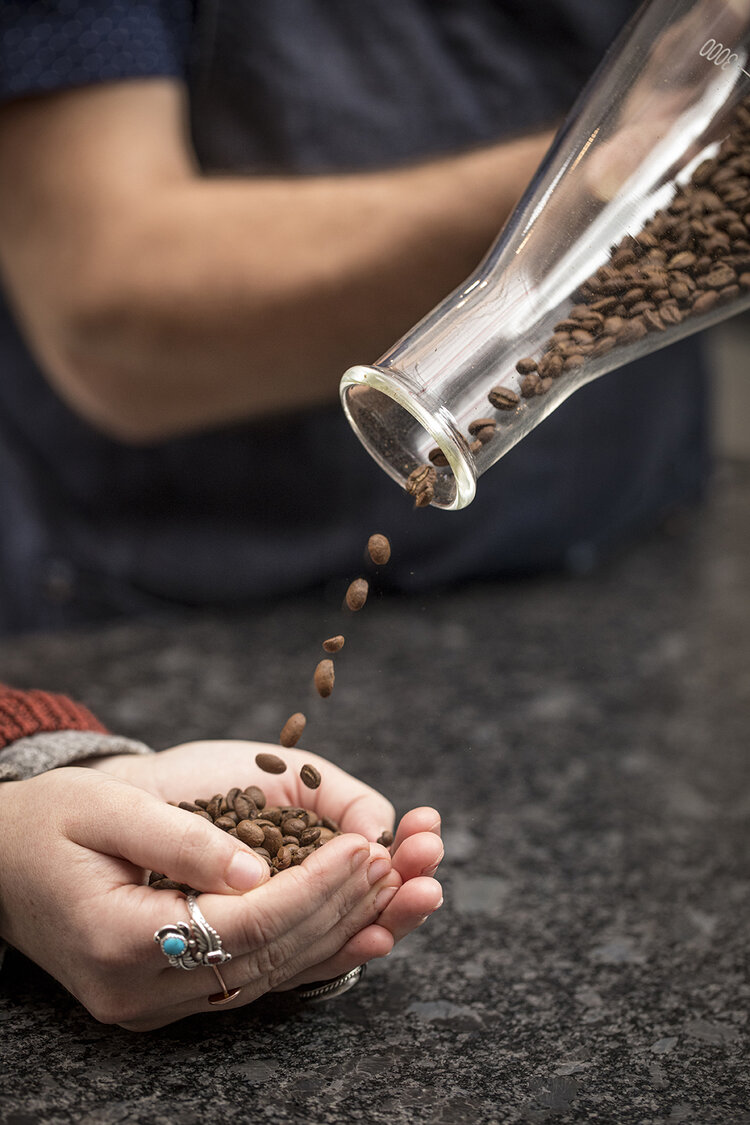 After hiking in Panama in 2009, Albert once again had thoughts of pursuing a coffee business. During his trip, he toured a coffee farm in Boquete and was intrigued long after. The Panama farm enlightened his view on the entire coffee-making process, from planting seedlings, to proper roasting, to topping off a perfectly brewed cup of flavor. This was enough to inspire Albert to return to school to become a barista. He received education and training in specialty coffee at Bellissimo Coffee Advisors in Portland, Oregon. 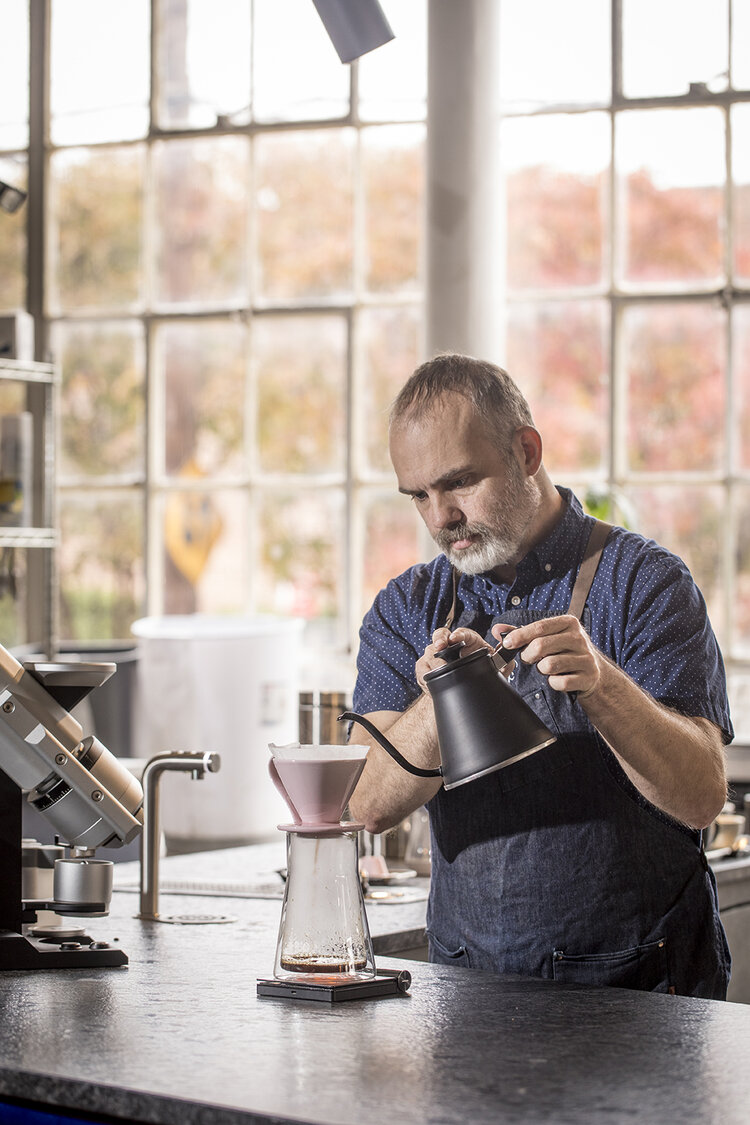 Unbeknownst to Albert, his then next-door neighbor Charles Billings would later become his business partner. Charles worked in hospitality and was well versed in running restaurants. “Albert and I lived next door in Cooper-Young in 2000,” says Charles. “I was in the hospitality industry, while Albert was in the medical field. Needless to say, we became friends, not only due to the commonality of our careers—emergency medicine services what ails you, and restaurants service what sustains you—but also the odd hours we kept.” 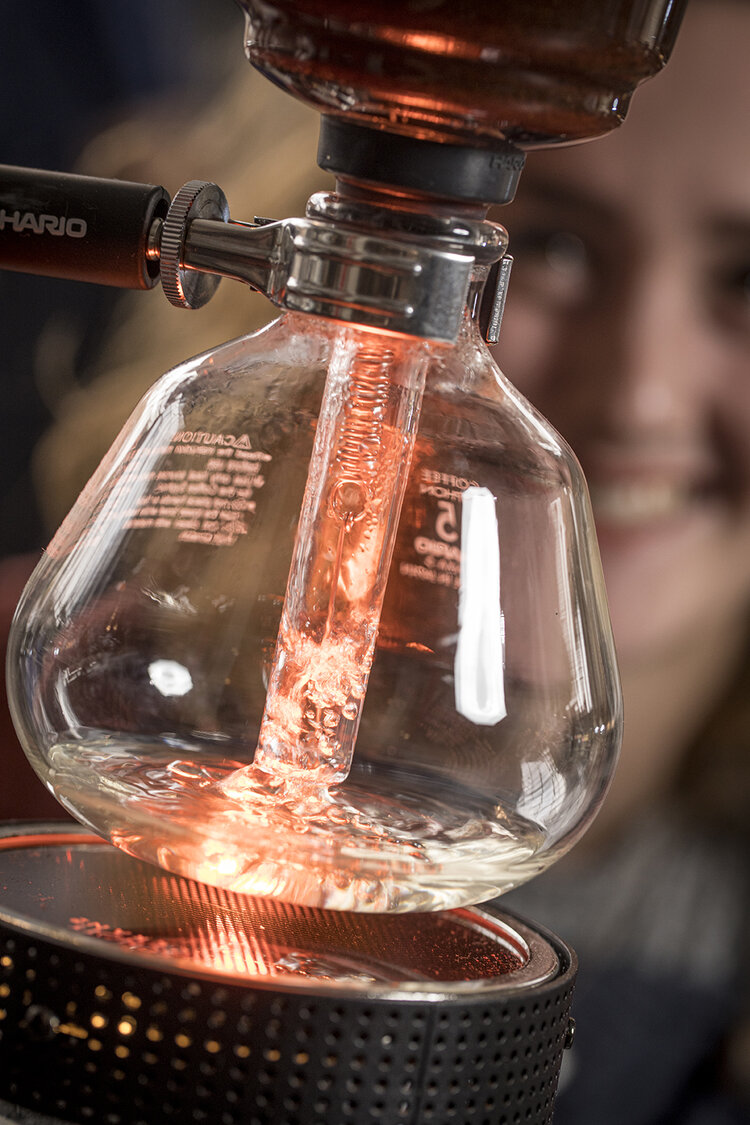 Albert moved to Harbor Town in 2004, but reconnected with Charles in 2012. “Our conversations always implied that sometime we should open something together,” says Charles. “And one night while I was working, Albert came into my place with the answer: coffee.” The idea of Dr. Bean’s Coffee and Tea Emporium was sparked. With Albert’s medical science background and Charles’s culinary arts and cocktail skills, they set about combining elements into the handcrafted science of the drinks they produce today. 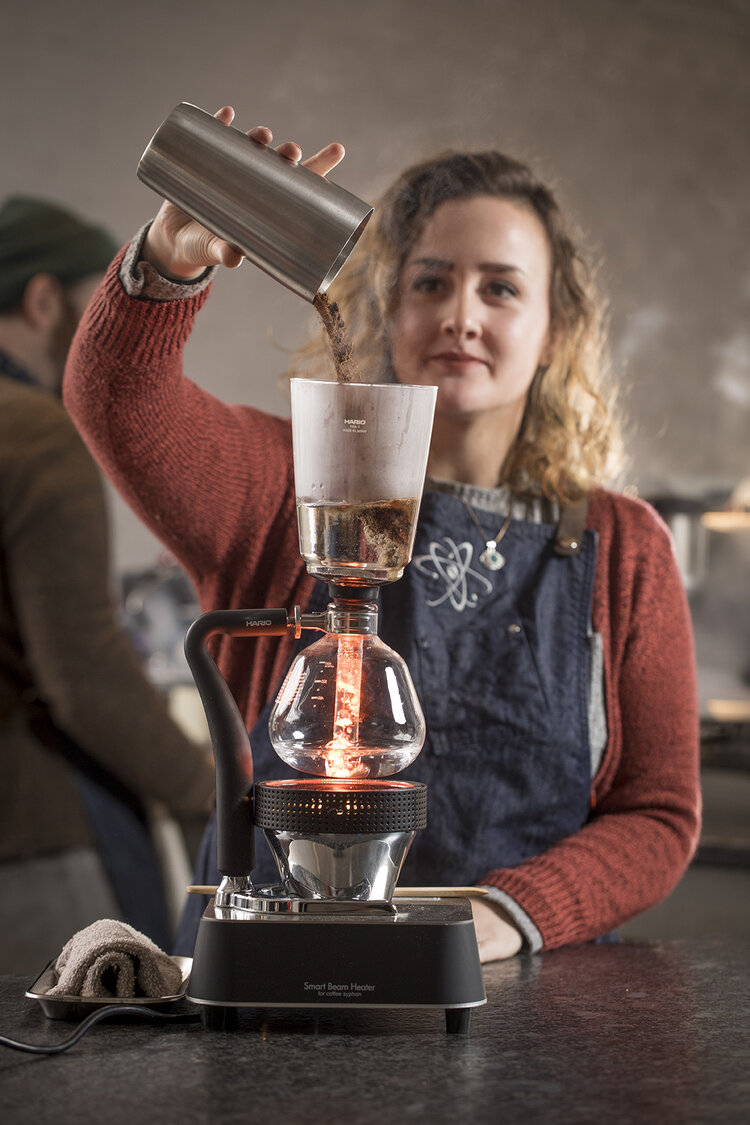 Albert and Charles returned to Bellissimo Coffee Advisors to receive training together, mainly to ensure their knowledge and skills were calibrated and in accord. They also trained in a roasting course at Coffee Lab International in Waterbury, Vermont. However, Charles soon found out that he had cancer, which set back the business venture, but not his spirit. “I’ve always been a ‘look on the bright side’ person, and that’s how I chose to fight cancer,” he says. “Before cancer, I was a workaholic, absentee father, husband and friend. I took my role as provider to extremes, and that dampened my relationships because work always came first. What I would soon learn is that I could balance both work and my personal life.” Coffee gave Charles the passion to grow and heal, and he’s been in remission for several years. 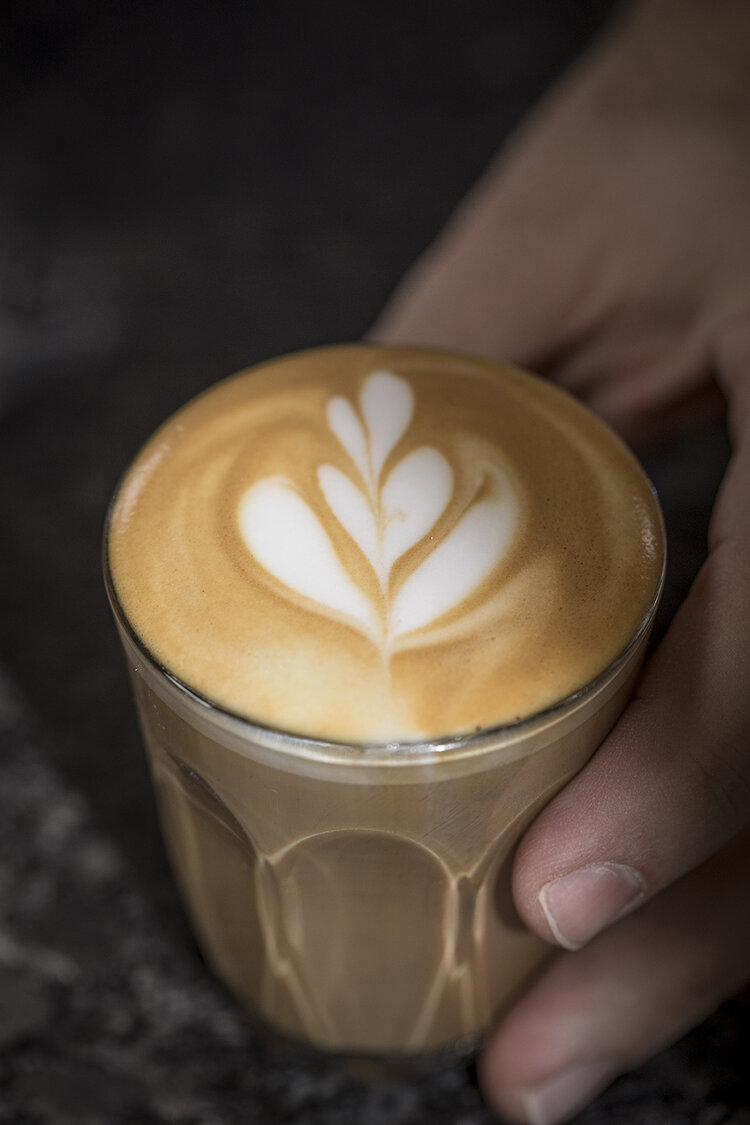 The duo didn’t start selling coffee immediately, as they strived to ensure their product would be worthy of buying. “Coffee has to be prepared properly—from the beginning soil, to storage in the warehouse, to how it’s roasted and, finally, to the brewing process of the barista,” Albert stresses. Their first roast was Isotope 72, consisting of chocolate, caramel and berry flavors. All of their coffee selections have natural, authentic flavors that are specific to where the beans come from. They visit with their partnering farmers to see firsthand the quality and grooming of their product. Albert and Charles have built intentional relationships directly with their farmers, and their inspired stories of family and community are incorporated within their flavors.

“If we think it’s amazing, we want Memphians to try it too,” says Albert. 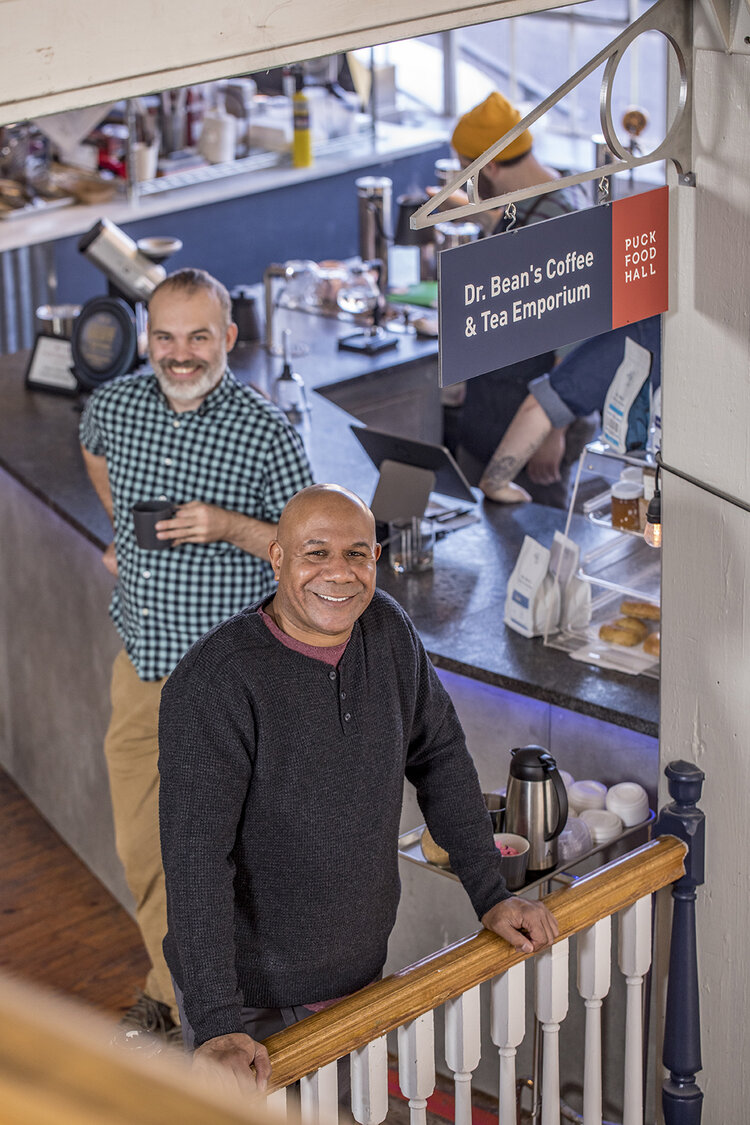 The Dr. Bean’s brand is instilled with a love for serving people. Albert’s compassion for people and community naturally spills over from his calling to serve in the field of medicine and even prepared him for the news of Charles’s illness. On the upside, Charles is in his fifth year of remission and looking forward to what life has to offer.

“The community that gave me the energy to heal from cancer has inspired my philosophy of building community through coffee,” says Charles.

Dr. Bean’s has partnered with many area businesses including The Curb Market, Muddy’s, Cordelia’s Market and The Hub, with the desire to expand to other partners as the company grows. 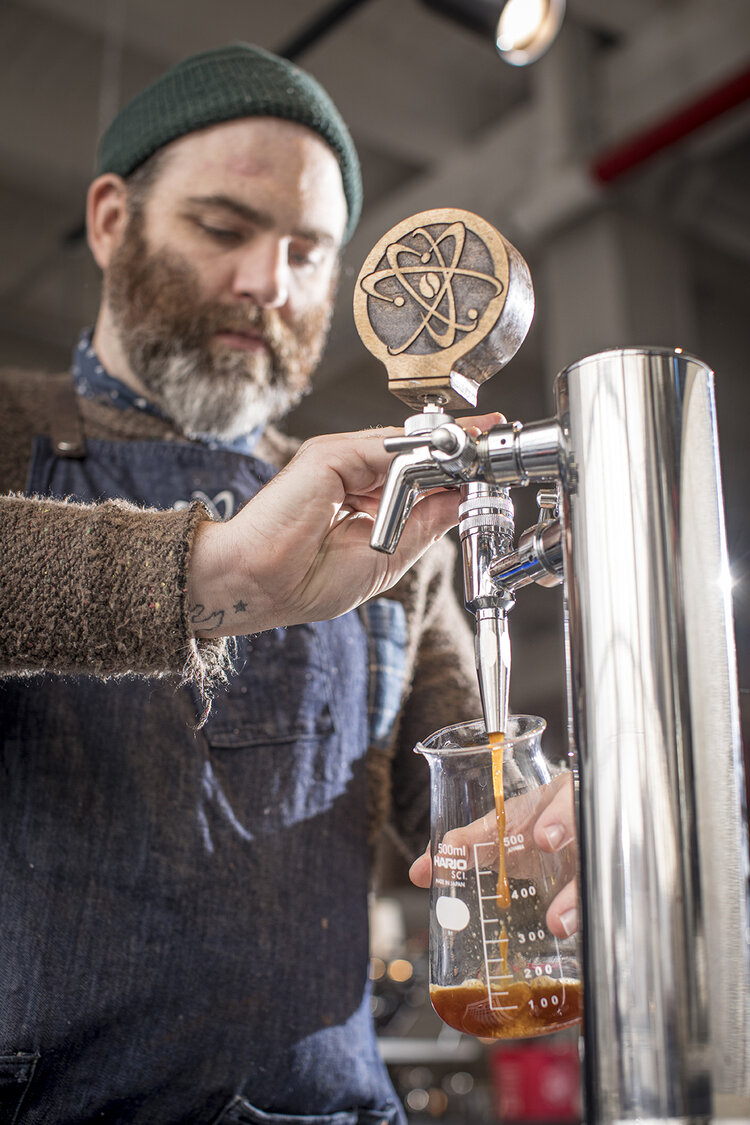 Opening in Puck Food Hall downtown has given Albert and Charles a community of other artisans to complement their coffee. “The idea of having the option of gelato or bagels and how multiple vendors can cross-pollinate each other was amazing to me,” says Charles on their decision to open there. “Everyone there is really working hard to collaborate and lift each other up. So far we’ve exceeded our expectations and are getting close to beating our projections.” 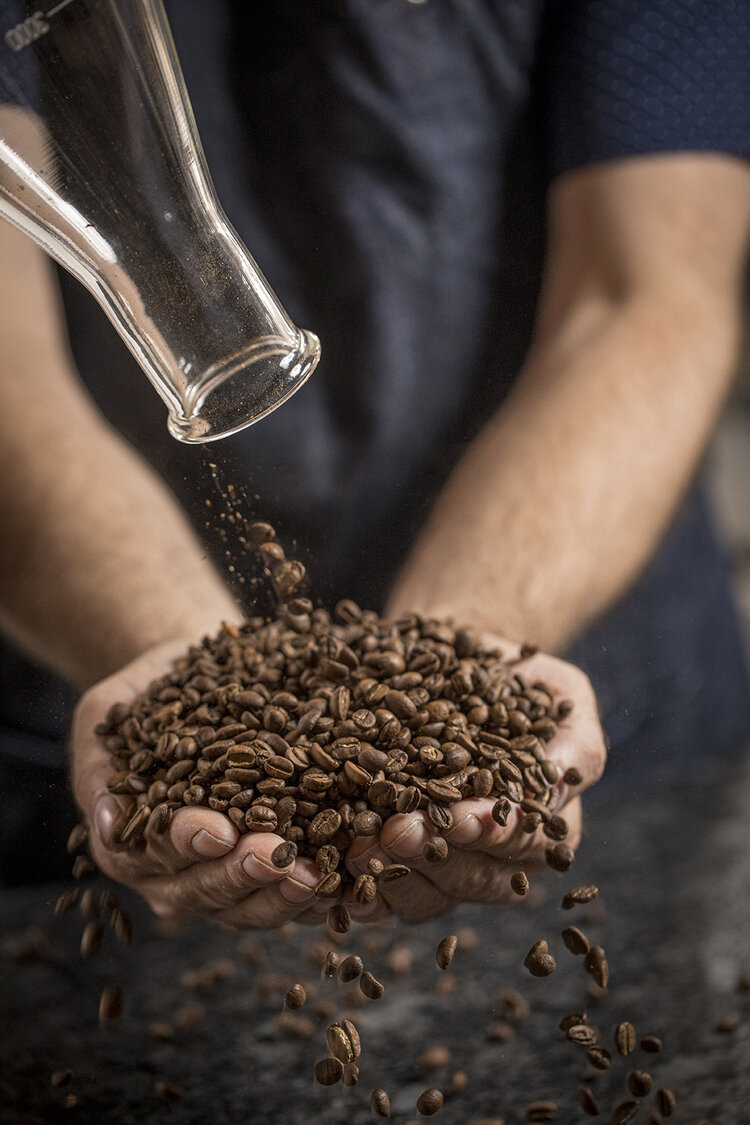 One of their special roasted flavors is Survivor’s Roast. “It’s a celebration of my five-year cancer remission anniversary that was May 21,” says Charles. “We are donating $5 of each bag sold to the UT/West Cancer Center. Considering that we’ve been roasting for a little bit over five years, my cancer story and our coffee story intertwine into where we are today.” 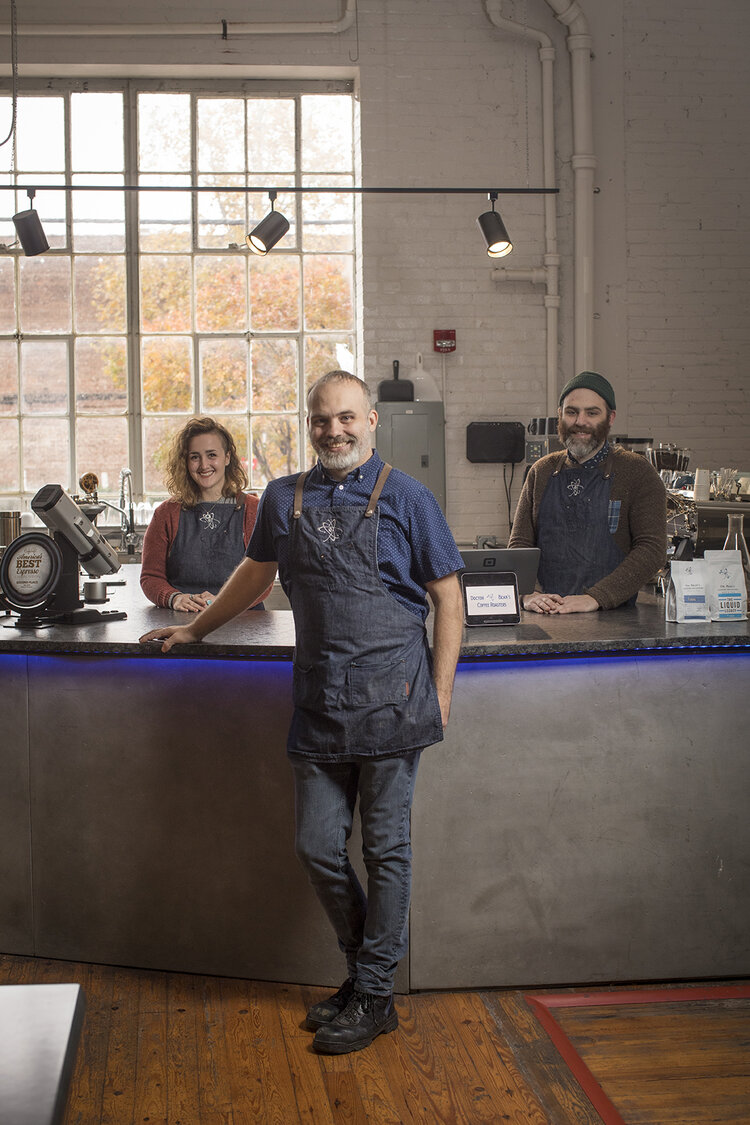 For the long-term, a flagship store is in the works. “It’s a very intensive and intentional project that will give us the opportunity to really highlight our passion for the science of coffee and tea,” says Charles. 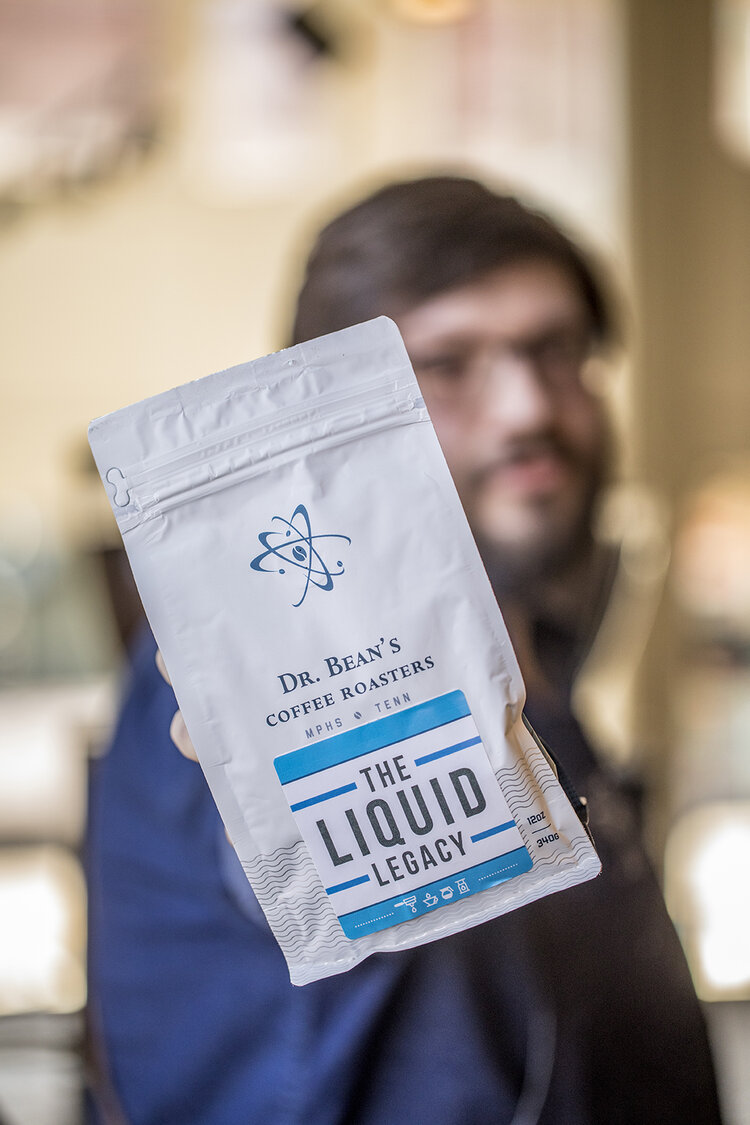 Erika Cain is a communications vet with chops in writing, public relations, graphic design, TV, radio and brand strategy. She is a skilled storyteller and has been a trusted adviser to executives and companies for almost two decades. Erika founded GIRL 24, a business mentoring initiative to help build a culture of gifted and ingenious female leaders. She is a spouse, mom, speaker, community volunteer and member of Junior League, and loves dissecting brands. @ecain_co

Justin Fox Burks has been a professional photographer for 20 years, but that’s not all. He photographed and co-authored two vegetarian cookbooks, The Southern Vegetarian: 100 Down-Home Recipes for the Modern Table and The Chubby Vegetarian: 100 Inspired Vegetable Recipes for the Modern Table. He feels fortunate to be able to make interesting images for a living. @justinfoxburks

A Bridge to the Brew