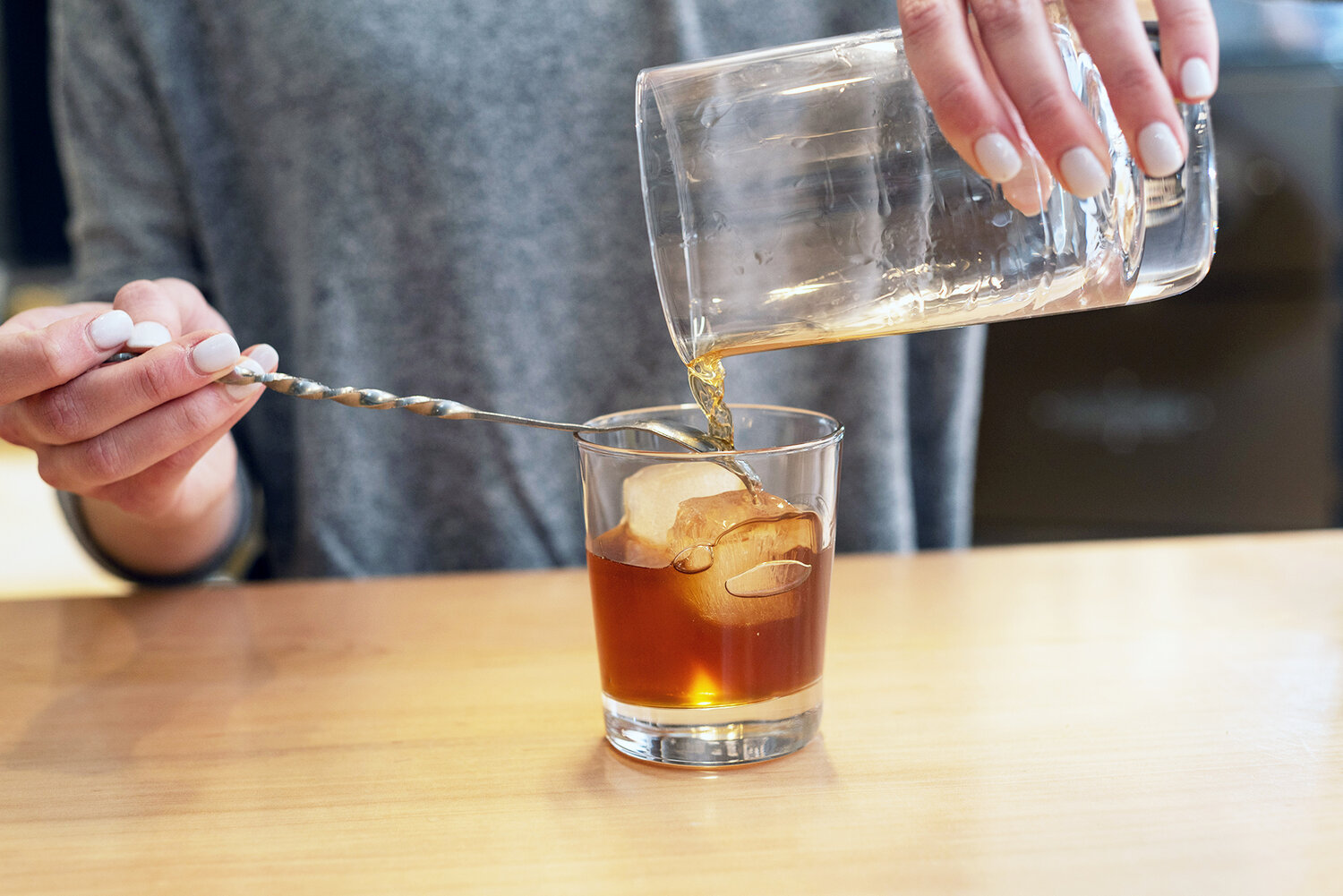 It’s fitting that the rise of coffee came about during the Enlightenment and the Age of Reason that fever-gripped Europe in the 1600s and 1700s.

Borrowed from Arab culture, coffee made an immediate and welcome impact on the atmosphere of rational inquiry as new ways of thinking took hold. It provided clarity and a sharp mind and was embraced by scientists, intelligentsia, clerks and the rapidly rising merchant class. It allowed them to regulate their working day and stay alert and focused until the close of business or even longer. 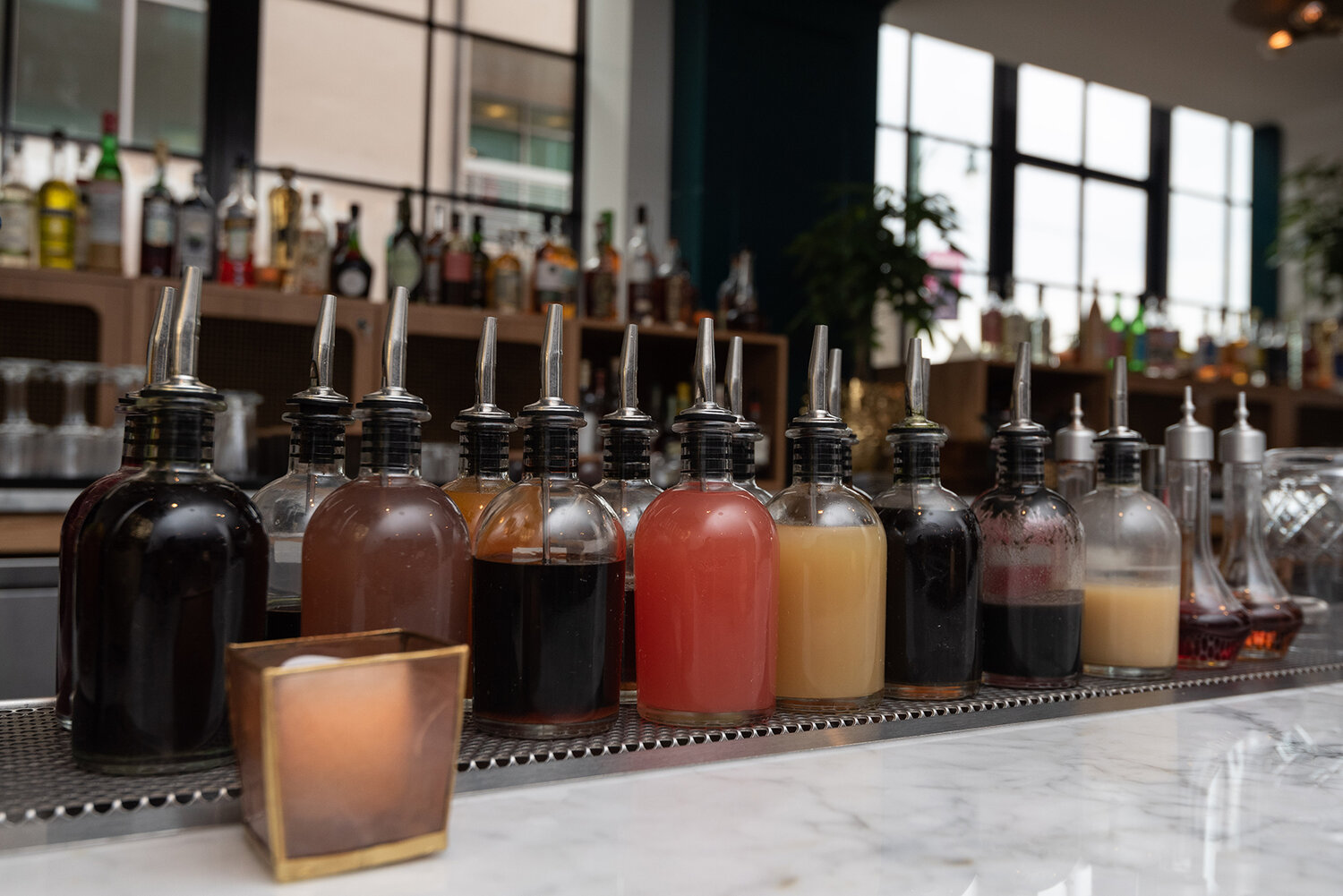 While alcohol had been around for millennia, coffee was the newcomer and essentially the antithesis of alcohol. Water during this era was often tainted and carried disease, so one’s day would usually begin with a beer or a small glass of wine or brandy. Coffee changed this because it was made using boiled water and instantly provided a safer alternative to spirits. Instead of beginning the morning relaxed and slightly drunk, people were perky and stimulated and the quality and quantity of their work was vastly improved.

Even today, coffee and alcohol affect our everyday lives like few things can.

The morning routine is ruled by the bean and the evenings by grain and grapes.

This can make them seem like unlikely bedfellows. We as consumers also rarely stop and consider how our coffee came to be (or where it’s from) or what early society in the Fertile Crescent had on their minds when they first developed alcohol for consumption (to get drunk). We just know we like it, and it’s there when we want to be up in the morning and there when we want to come down in the evening and sometimes vice versa or even at the same time.

If you’ve been around Memphis long enough, you might remember the old coffee drink menu at Café Society. This was long before anyone thought about using coffee for cocktail construction. This menu was legendary, with many regulars referring to the original names long after the menu had disappeared. The Café Special was a particular favorite, consisting of Bailey’s Irish cream and Grand Marnier, but the others were all different and made with your grandmother’s coffee liqueurs like Tia Maria and Kahlúa. They were simple, but they seemed exotic and hit the spot after a great meal at the café.

The two most iconic “coffee drinks,” of course, are the White Russian and Irish coffee. Both of these are relative newcomers to the world of coffee cocktails, Irish coffee being developed in the 1940s and the White Russian in the 1960s. Ask any bartender in the world to make you either, and they will almost certainly present it to you in its classic form. 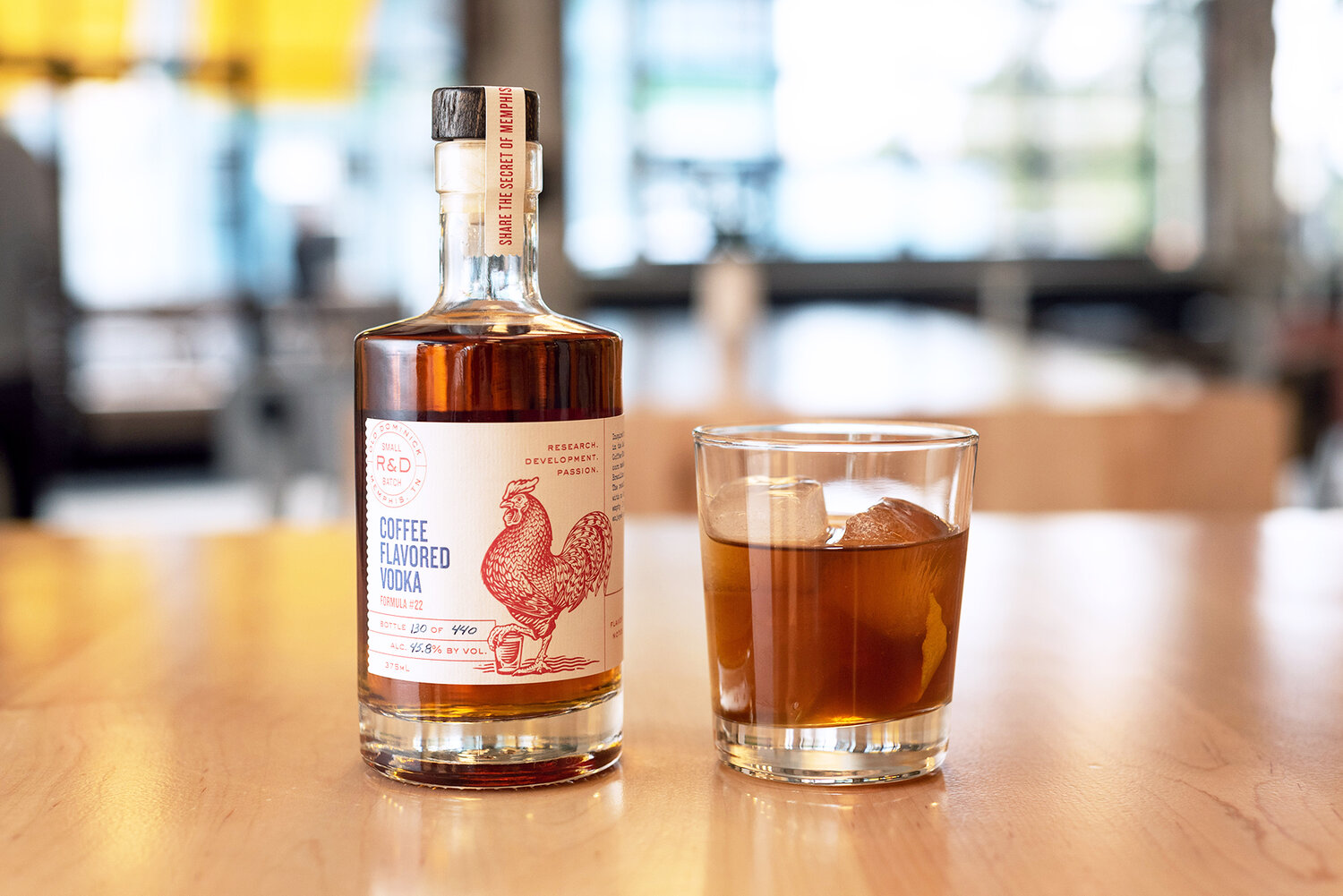 Alex Castle, head distiller at Old Dominick Distillery, has just released a limited edition coffee-infused vodka, made in collaboration with Edge Alley. Alex aged the vodka in a used bourbon barrel for about a year. Once it was ready, she and Tim Barker of Edge Alley sat down to taste the vodka and discuss Alex’s vision for the final product’s flavors. Then Edge Alley roasted whole Brazil Fazenda Paraiso beans, Alex added them and and then she let it sit for about two weeks.

She’s been happy with the results. “The flavors are dark chocolate with caramel notes,” she says.

Tim says the final product is different from what he expected. “Here’s what makes it special,” he says.

“We looked at all of the pieces of the puzzle before we constructed it. Right out of the bottle you can taste the bean character and the natural process. There’s a sweetness from the fruit pulp on the bean.”

If you’re interested in trying a cocktail made with the coffee-infused vodka, Edge Alley is the only place to find one on a menu. They’ve created A Very Dirty Chai, a cocktail that’s a riff on the old-fashioned and includes a cascara tincture (made from the coffee cherry) and chai tea concentrate. 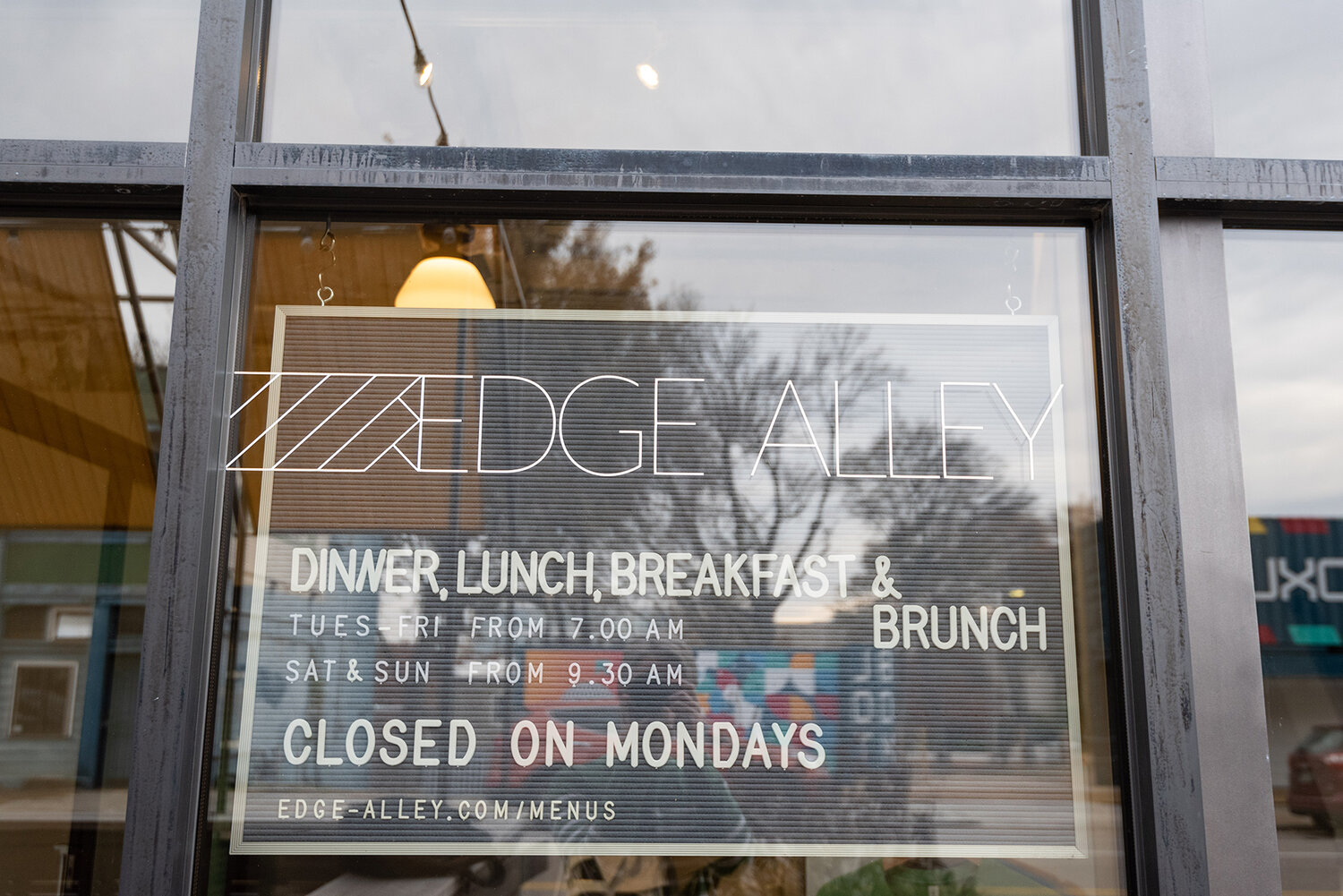 But what about coffee and beer, you say? If you’ve consumed enough stouts and porters, it’s apparent that the flavors of coffee are already in the brew even when no beans are used.  Coffee and beer both require roasting and are aroma-driven pleasures unto themselves.

Craft brewers today are a perspicacious lot and—just like they do with their hops—they seek out the best when it comes to their coffee.

Davin Bartosch, owner and brewer at Wiseacre, is a prime local example. 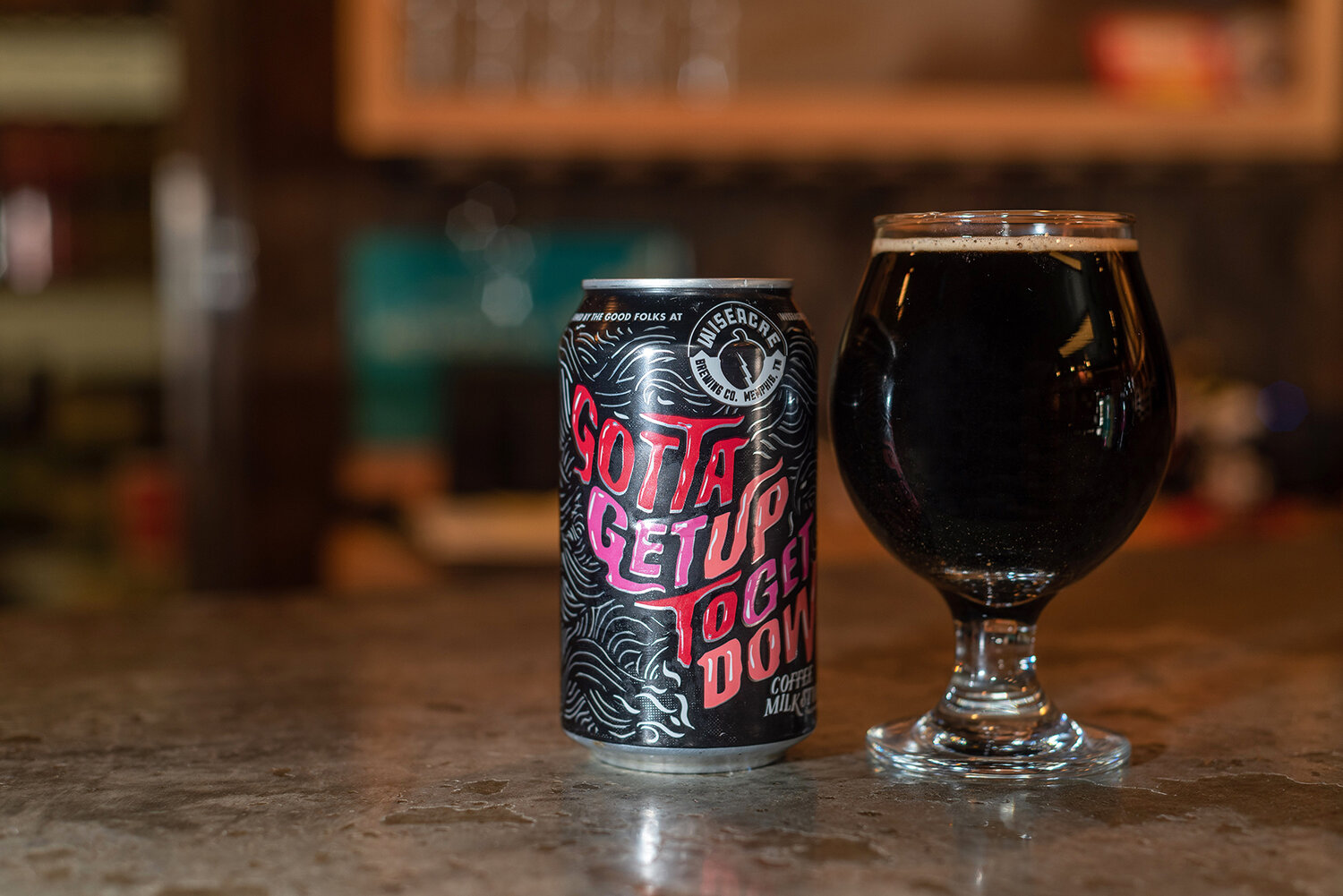 Wiseacre produces one of the most popular beers in this market with Gotta Get Up to Get Down, a luscious coffee milk stout that has its beginnings from when Davin was in brewing school in Chicago at Rock Bottom Brewery. It was here that Davin befriended Tony Dreyfuss, founder and owner of Metropolis Coffee and discovered the bean from the Konga region of Ethiopia he still uses today. “The coffee for Gotta Get Up to Get Down is an all-Ethiopian natural process coffee of single origin. Natural process means the fruit is allowed to ‘rot’ on the bean, which leads to this intense fruity note with lots of blueberry pie flavors,” says Davin.  Made with select Bravo hops and various malts, including lactose sugar, Gotta Get Up to Get Down is medium bodied and slightly dry with a sweet roasty flavor. 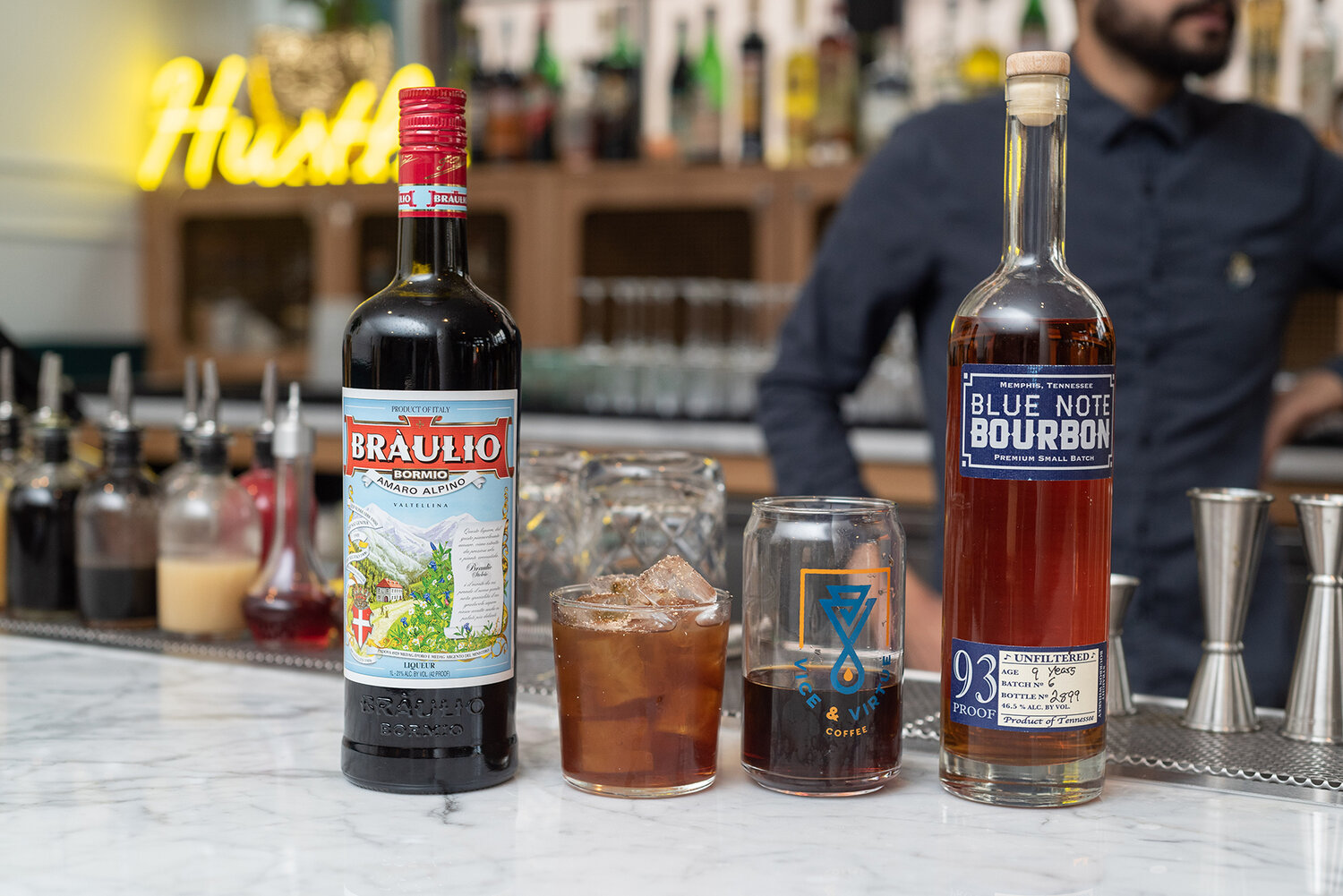 Some local coffee purveyors like Tim and Teri Perkins from Vice & Virtue Coffee are even going the extra step and aging hand-select roasted beans in used bourbon barrels. Their barrels specifically are procured from Big River Distillery’s Blue Note Bourbon. Vice & Virtue, a Cooper-Young Community Farmers Market staple since 2017, opened their first retail space in the Arrive hotel downtown on South Main in November 2019. Tim told me he had seen other roasters “tinkering around with barrel aging, but most were doing so with subpar commodity coffee.” 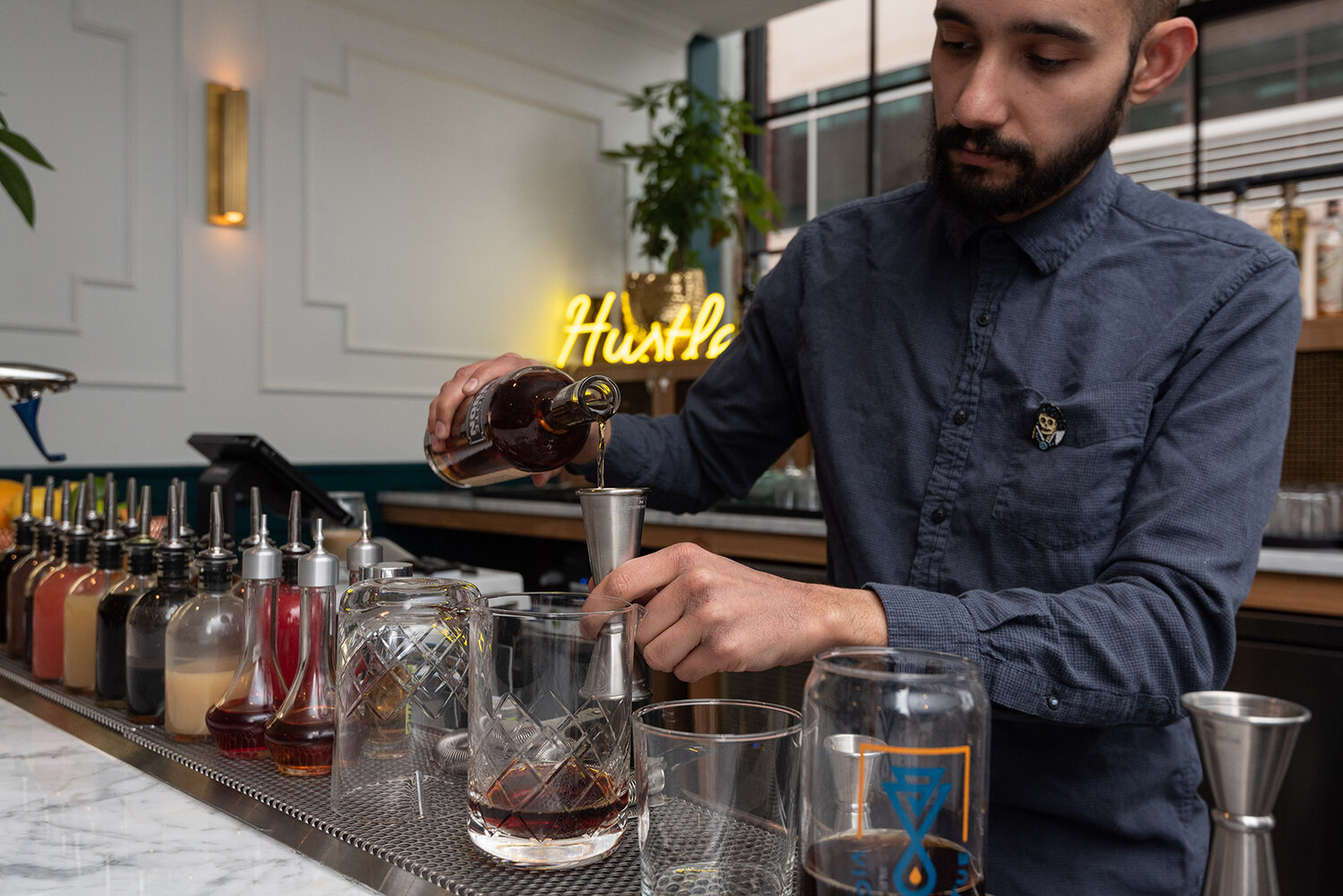 He was curious what would happen if he took a quality specialty coffee and aged it in a higher end, charred oak bourbon barrel. An introduction to the owners of Big River Distillery has led to the development of a truly local product. After an extensive trial-and-error period that included “rolling the barrel” and determining the precise aging time for the coffee, he felt like he was onto “something special.” 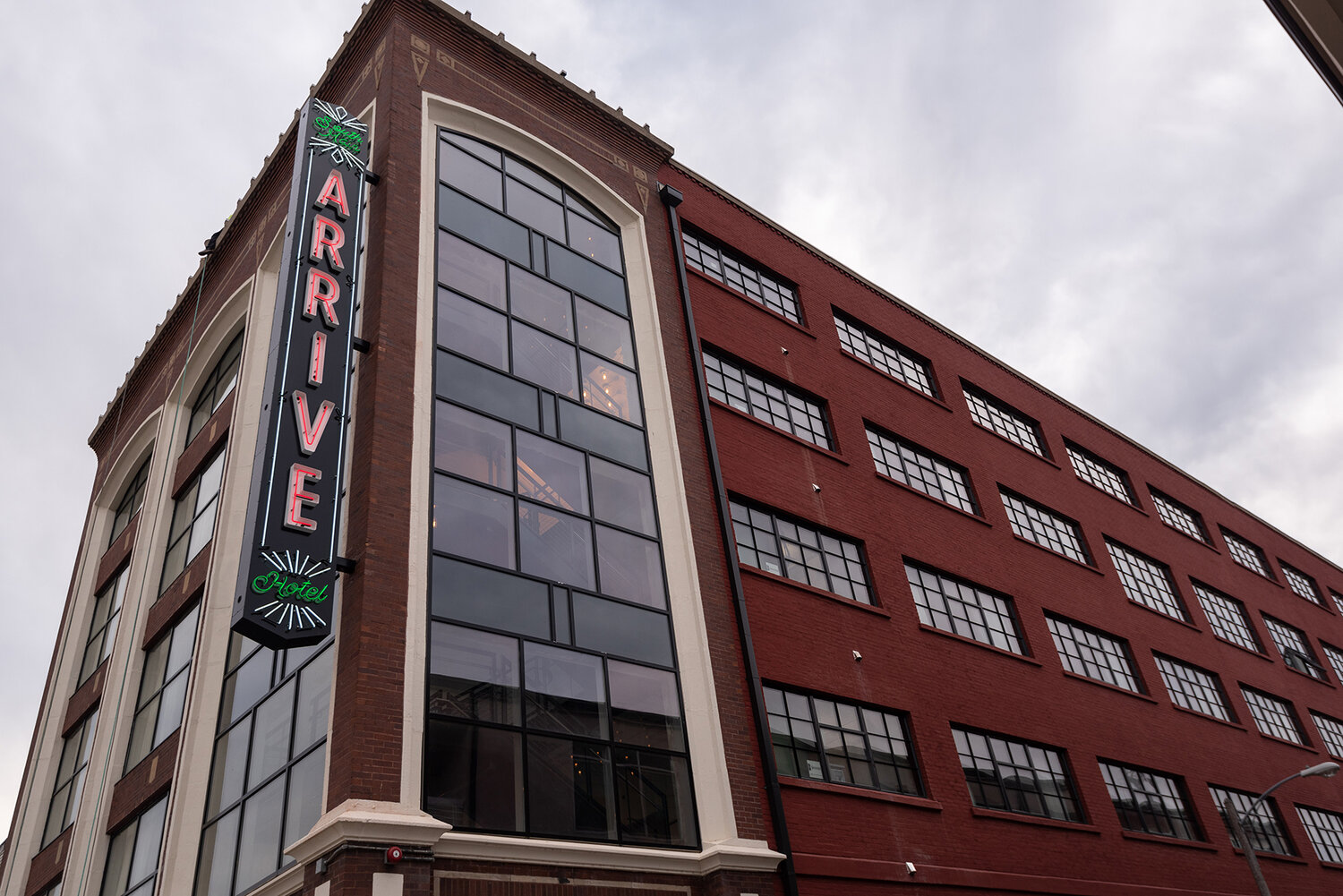 With this particular product, along with their new commercial space, Vice & Virtue feels like they fit in nicely between high-end craft cocktails and carefully curated specialty coffees. They contracted Erik Hmiel, beverage director for Arrive hotel, to develop a cocktail recipe called Proper Ambition that utilizes Blue Note Bourbon and cold brew made from Vice & Virtue’s barrel-aged coffee. The recipe is also included in each box of barrel-aged Vice & Virtue coffee they sell.

Conspicuous consumption and personal preferences aside, coffee and booze will always be confederates. Constantly attempting to cancel the other out, they continue their service as benevolent bookends to the beginning and end of our human days and nights.

Enjoy these coffee and booze cocktails at home!

I used Old Dominick’s coffee-infused vodka to develop Sugar Magnolia, a White Russian variant that, in my opinion, is superlative. The vodka itself has enough coffee (and even a little bourbon) flavor to hold up the drink, so I lessened the amount of coffee liqueur and added some sweet pecan notes to brighten up the bitter aroma. Cheers and enjoy.

Fill a double old-fashioned glass with ice and add in measured ingredients. Top with heavy cream to taste.

This cocktail is a riff on an old-fashioned. Because the Old Dominick was rested in bourbon barrels and the coffee that we roasted for the project is processed naturally (some fruit pulp remains on the bean), we chose to explore their potential in traditionally heavier cocktails. We found that, by lightening up an old-fashioned, we were able to showcase the entirety of the coffee crop—seed and fruit. The resulting cocktail has a seductive spice and a gentle smoky aroma, and you are able to taste the full, natural flavor of coffee. Also, it’s pretty boozy.

Stir all ingredients together for 30 rotations in mixing glass with 3 oversized ice cubes. Transfer to a rocks glass and rim. Garnish with a lemon twist.

Tim and Teri Perkins of Vice & Virtue wanted an approachable cocktail people would feel comfortable making at home. One that would showcase the Blue Note Bourbon as well as the coffee aged in the Blue Note barrels. Or, a cocktail that showcases the vice and the virtue. They hired Erik Hmiel, who created a riff on a Black Manhattan.

Combine ingredients in a cocktail mixing glass with ice and stir for 12 seconds. Strain the cocktail into a chilled stemmed coupe glass. Express the oil from an orange peel over the top, garnish with freshly grated nutmeg and enjoy.

**To make cinnamon syrup, combine 1 cup demerara sugar, 1 cup water and 5 crushed cinnamon sticks in a saucepan over medium heat. Stir occasionally and remove from heat just as the syrup begins to boil. Cover until cool. Strain out cinnamon sticks and store syrup in refrigerator for up to 3 weeks. Yields 12 ounces of syrup.