Love of craft and people drives this Oxford-based gelato company 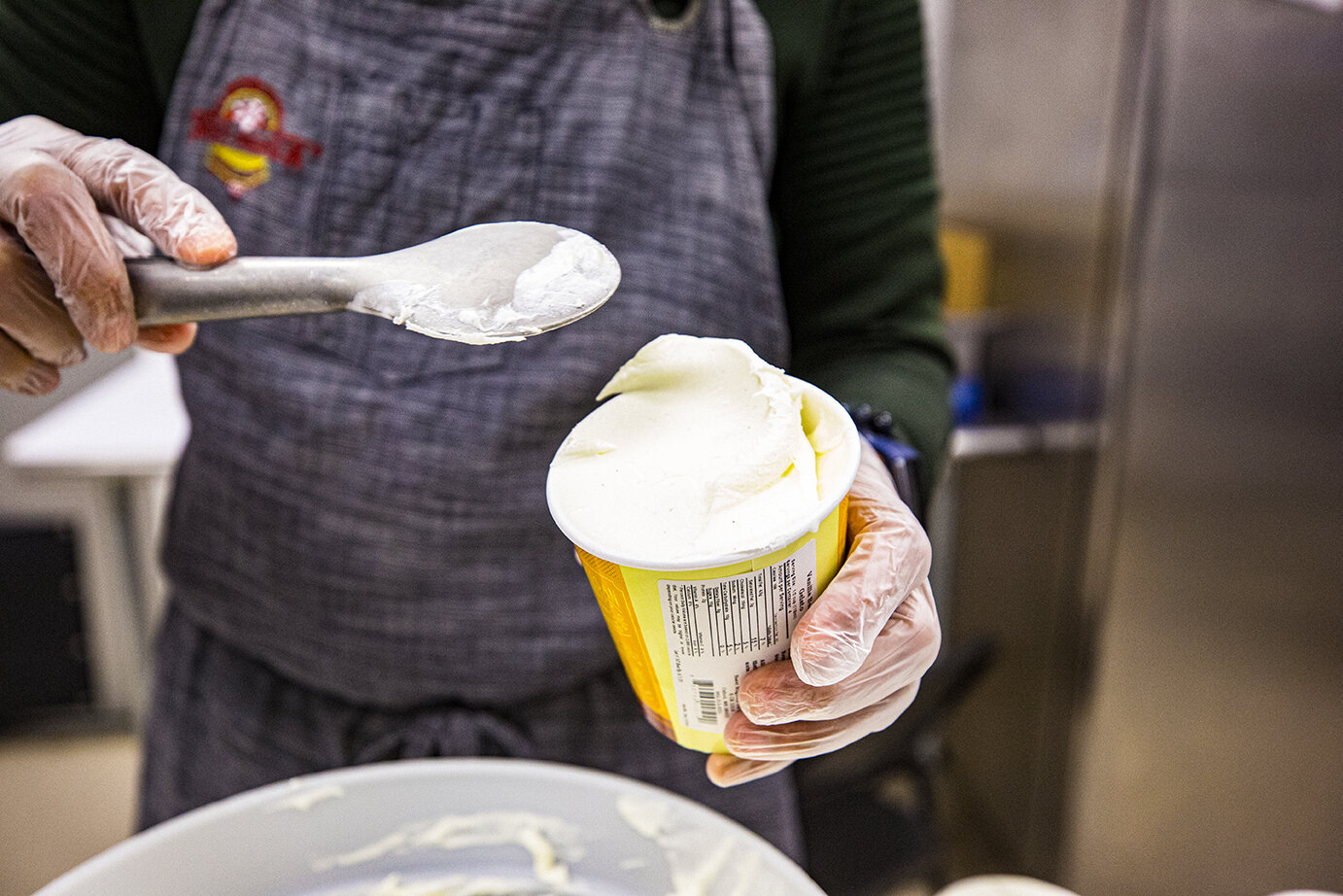 [Editor’s Note: Puck Food Hall recently announced it will be closing on December 31. Sweet Magnolia is currently looking for a new retail location for 2021.]

Dessert-makers like Hugh Balthrop are the poets of the culinary world.

None of us would be foolish enough to argue the world suffers from a lack of artists—that things would be so much better if there was just one more painter somewhere out there, or one more poet, or one more musician. Art is the grace note of human existence, the icing on the cake, the resplendent ornament on the Christmas tree. It’s like that speech Robin Williams’ character gives in Dead Poets Society, about how medicine, law, business, and engineering are “noble pursuits and necessary to sustain life. But poetry, beauty, romance, love—these are what we stay alive for.”

The best art elevates our senses, and is a kind of reward for our endeavors. A sweet treat, if you will, to be expectant about. You can probably see where I’m going with this. 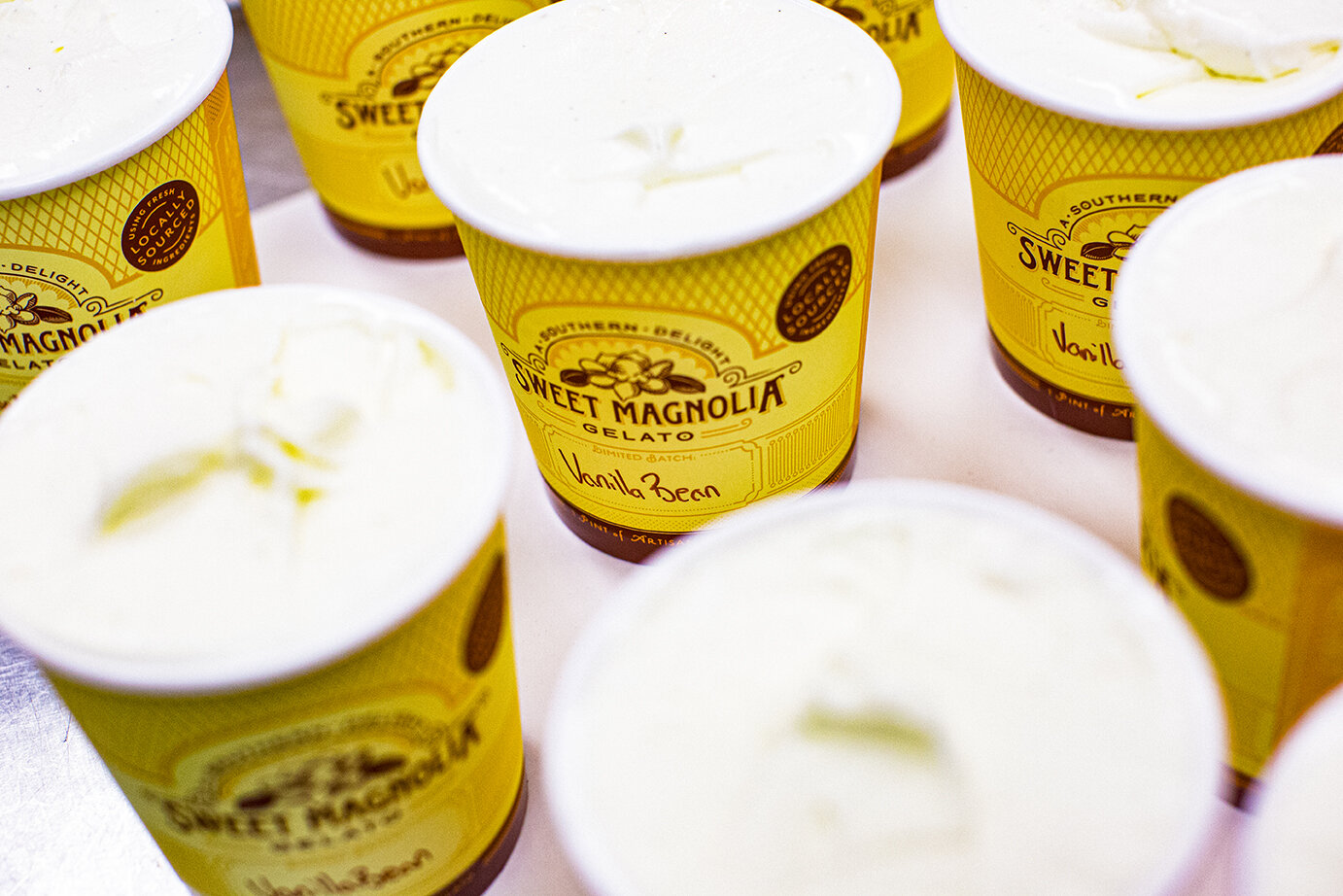 You can enjoy a meal without dessert—but it’s the creations of someone like Balthrop, who for almost 10 years has owned Sweet Magnolia Gelato Co., that bring the poetry to our table. Maybe, I’ll grant you, that’s all a bit high-minded, too lofty of a metaphor to describe the work of an ice-cream maker who’s developed hundreds of his own flavors of handcrafted gelato and sorbets over the past decade.

As far as I’m concerned, though, the essence of poetry is in simply finding the beauty in ordinary things, and therein is a description of Balthrop’s grind, in microcosm. Grind is actually the perfect word for it. The owner of this Oxford, Mississippi-based dessert enterprise that sells flavors ranging from creamy Honey Vanilla gelato to Stracciatella (aka Italian chocolate chip, with the gelato also suffused with shreds of chocolate) told me that this year, with everything that’s gone on, has made him feel a little like he’s just starting out. 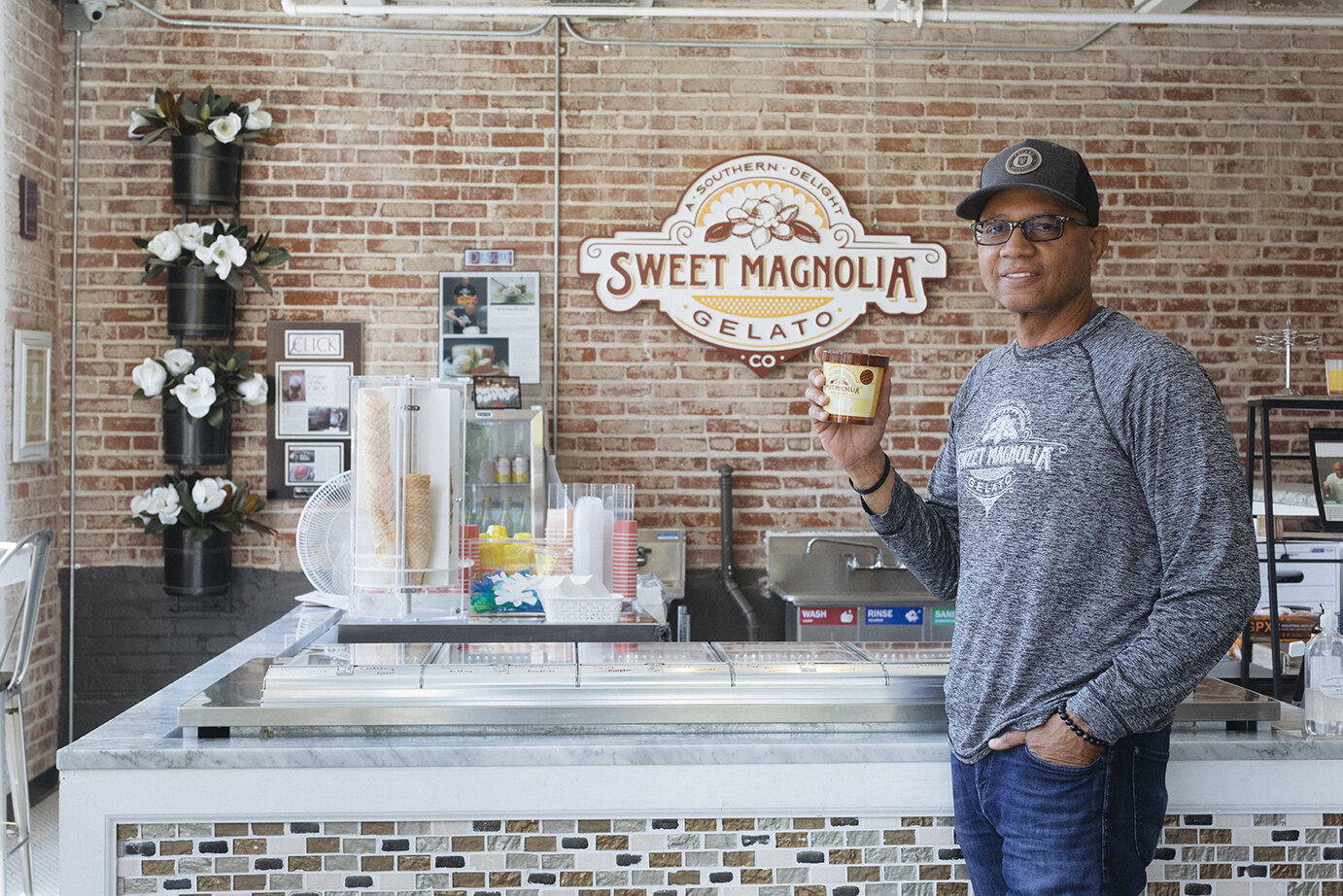 You know when you’ve got the whole world ahead of you, that point in your career when you’re just starting out and what you lack in experience you make up for in raw hunger? That’s how Balthrop feels right now, all over again.

On this particular afternoon, he’s handling everything from talking to a food journalist to sifting through email and text orders, to seeing what’s going on for the day and planning out his next round of deliveries. “June, technically, should have been a celebratory month for us,” he tells Edible Memphis. “Nine years of business total, and then one year of retail. I started my wholesale business in June of 2011. But with everything going on, racial tensions and the pandemic, we just weren’t in a position … I just knew my spirit wasn’t there. Just fighting to save the business, I even got in a hole where … I just wasn’t creative, man. I didn’t feel right posting. I had to snap out of it.”

A couple of weeks before he chatted with Edible Memphis, he’d just moved his eldest into Tulane University. Because that’s the thing—life goes on, even in the middle of a pandemic. It’s even settled into something of a predictable rhythm again for Balthrop. On a typical day, he may get a delivery of milk from Brown Family Dairy—based right there in Oxford, just like Sweet Magnolia’s manufacturing facility. Some days, there’s a drop-off of milk and cream. “I can actually walk over to the farmers market from where we are, so I might go walk over and see what they have—yellow watermelons or whatever,” he explains. Then it’s off to the “lab,” where he dives into making gelato, sorbet, and frozen yogurt. The orders start coming in. He makes deliveries on the weekdays as well as on weekends. 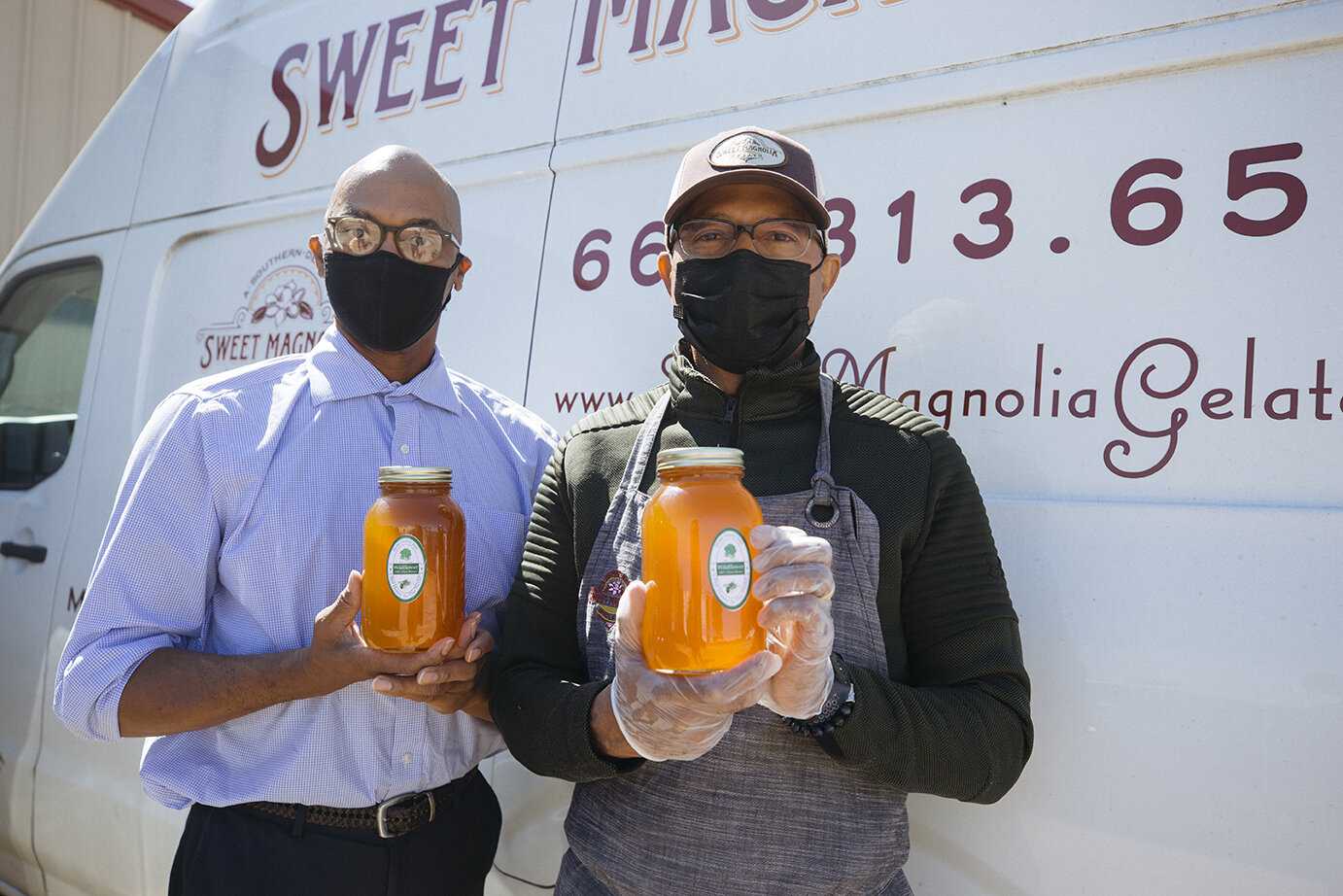 His preference is to make gelato early in the week, so he can deliver everything towards the back half of the week—to his retail location inside Puck Food Hall, as well as to his wholesale partners. But gelato is being made at the manufacturing facility seven days a week, when needed. 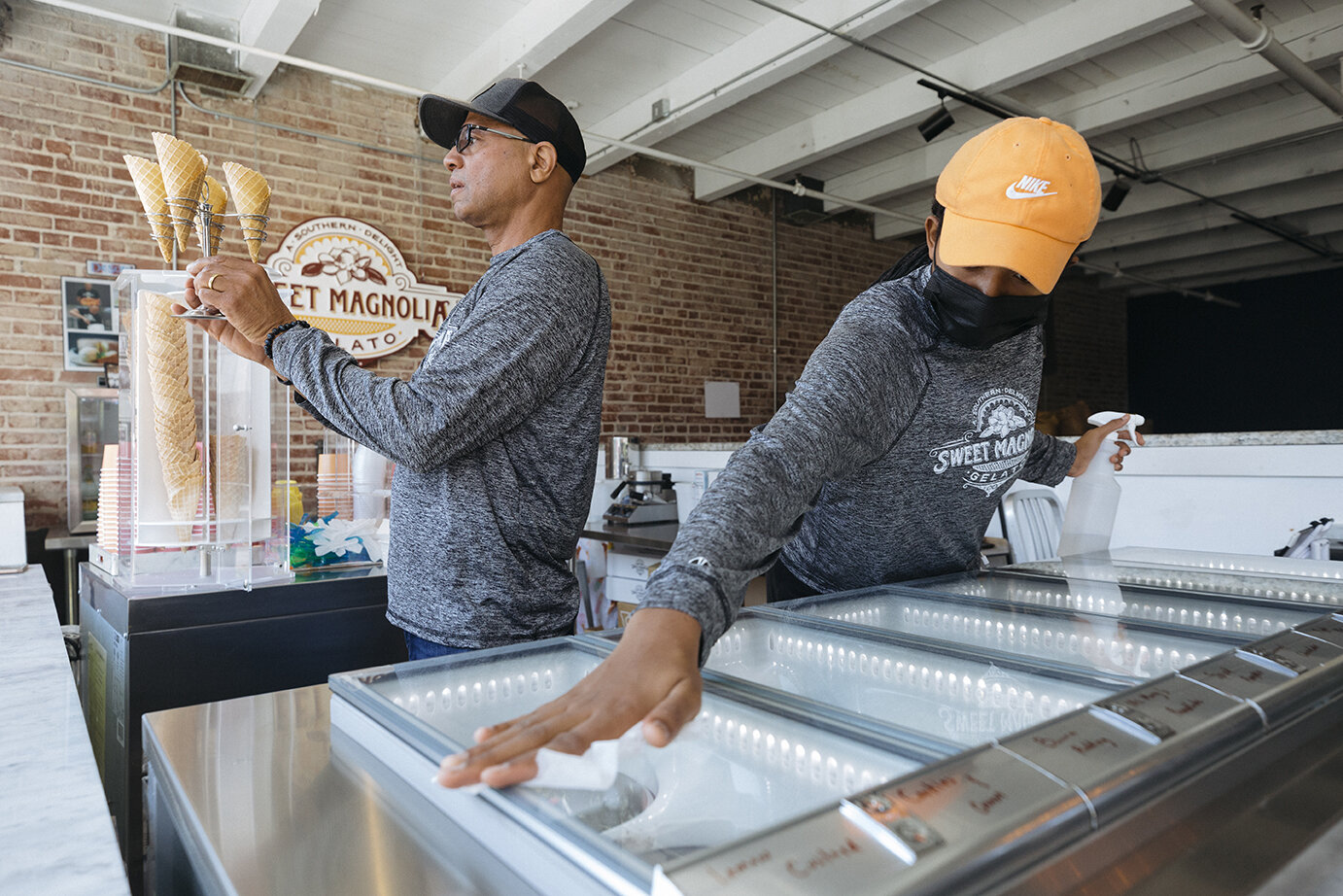 “The pandemic basically forced us to switch up our whole business model,” he says. “Our wholesale business is tied directly to the restaurant business. We went from sales going down in that sector probably 70 to 80 percent. This is, like, the bulk containers. One of our clients, they would order, like, $2,000 worth of product each time, and they just placed an order today for $200. But part of our wholesale model is also selling pints to places like Muddy’s, Curb Market, High Point Grocery. Those sales increased probably 60 to 70 percent.”

You get the sense that he especially tries to front-load his week with making gelato because his deliveries are generally a bit more involved than a simple drop-off. If that was all they were, Muddy’s owner Kat Gordon wouldn’t take the time to handwrite a letter to Balthrop, as she did recently, which read: “It was so lovely to finally meet you in person! We’re proud to be selling such tasty gelato and look forward to more – Kat.” 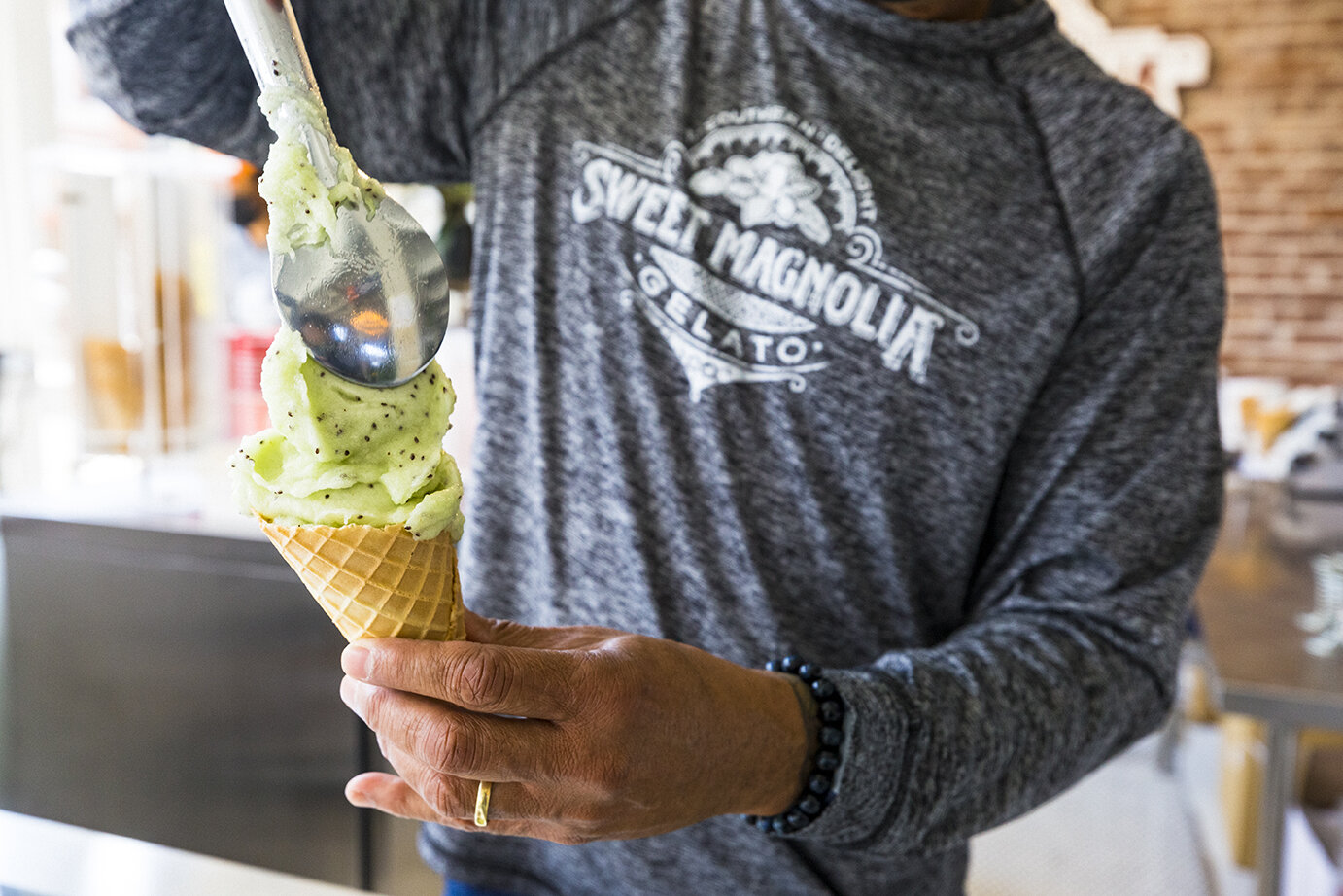 It helps immensely if you love the game you’re in, and Balthrop is as big a fan of gelato as they come.

His training included taking a weekend course, studying under a gelato master. He experimented at home. He bought his own gelato machine and played around with it, by his own admission. “People ask me what’s the difference,” he says. “I tell them this is Italian ice cream. What I like about making it is it’s less fat. It’s less sugar. It’s less air. So there’s technique with the balancing of the recipes. I prefer the flavor over ice cream—and, of course, it’s fresh. The ingredients that we use—we use the Brown family farm milk and dairy. We steep a lot of ingredients in a pasteurizer. And I just like the history of gelato.” 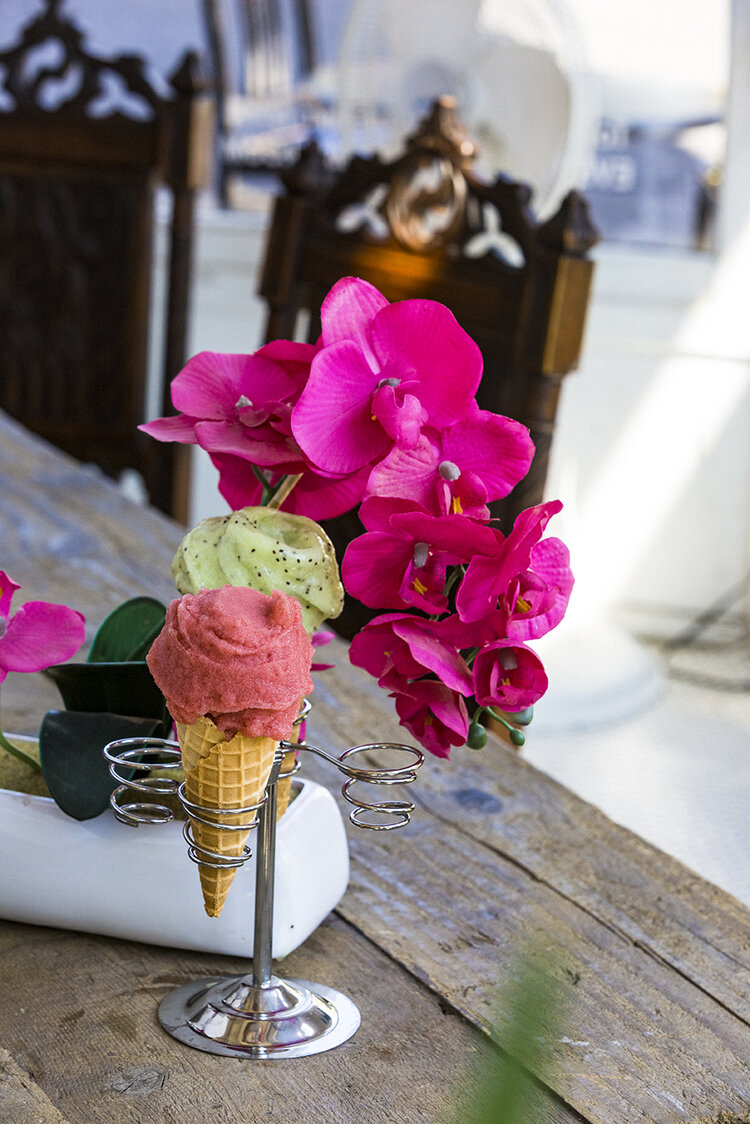 Balthrop also likes talking about one of the most instrumental keys to his success, a kind of indispensable X factor that means the difference between something being good and great. Put simply, like that catchy old Beatles song says, he gets by with a little help from his friends. Friends like the folks at Dr. Bean’s Coffee and Tea Emporium, with which Sweet Magnolia recently teamed up by utilizing their espresso beans to mix coffee, chocolate, and gelato to create an Espresso Stracciatella gelato. And friends like Phillip Ashley Rix, who hooked up with Sweet Magnolia to launch Soul Mane Supreme—a salted caramel gelato base with chopped cashew turtle pieces from the chef. 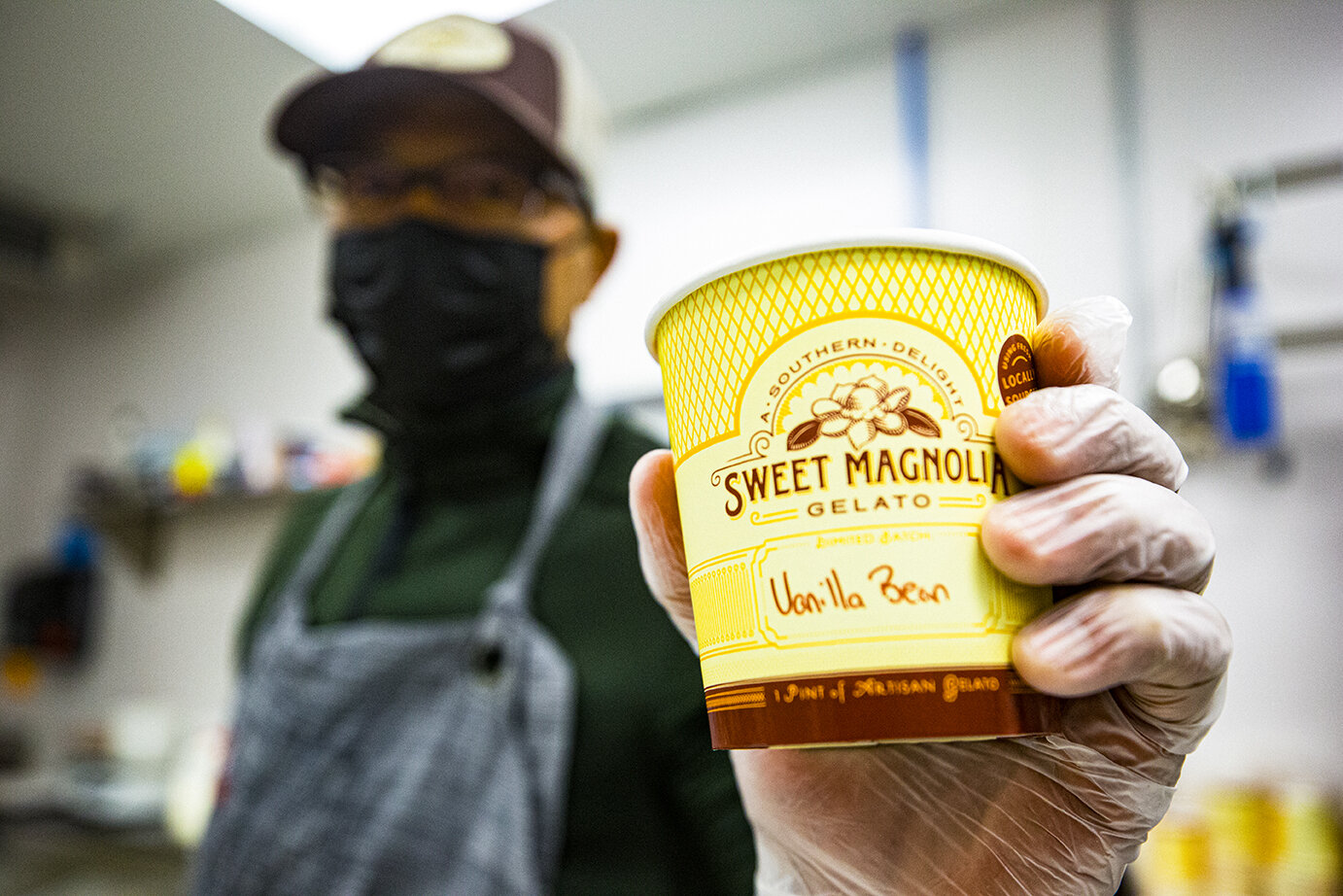 “It just makes sense. For us, it’s always been about relationships. I just love the folks that I deal with. Having your own business, it gives you that liberty. I love asking about the wife and husband and the kids, and it can mean that what should take five, 10 minutes could take an hour or two when I go visit. 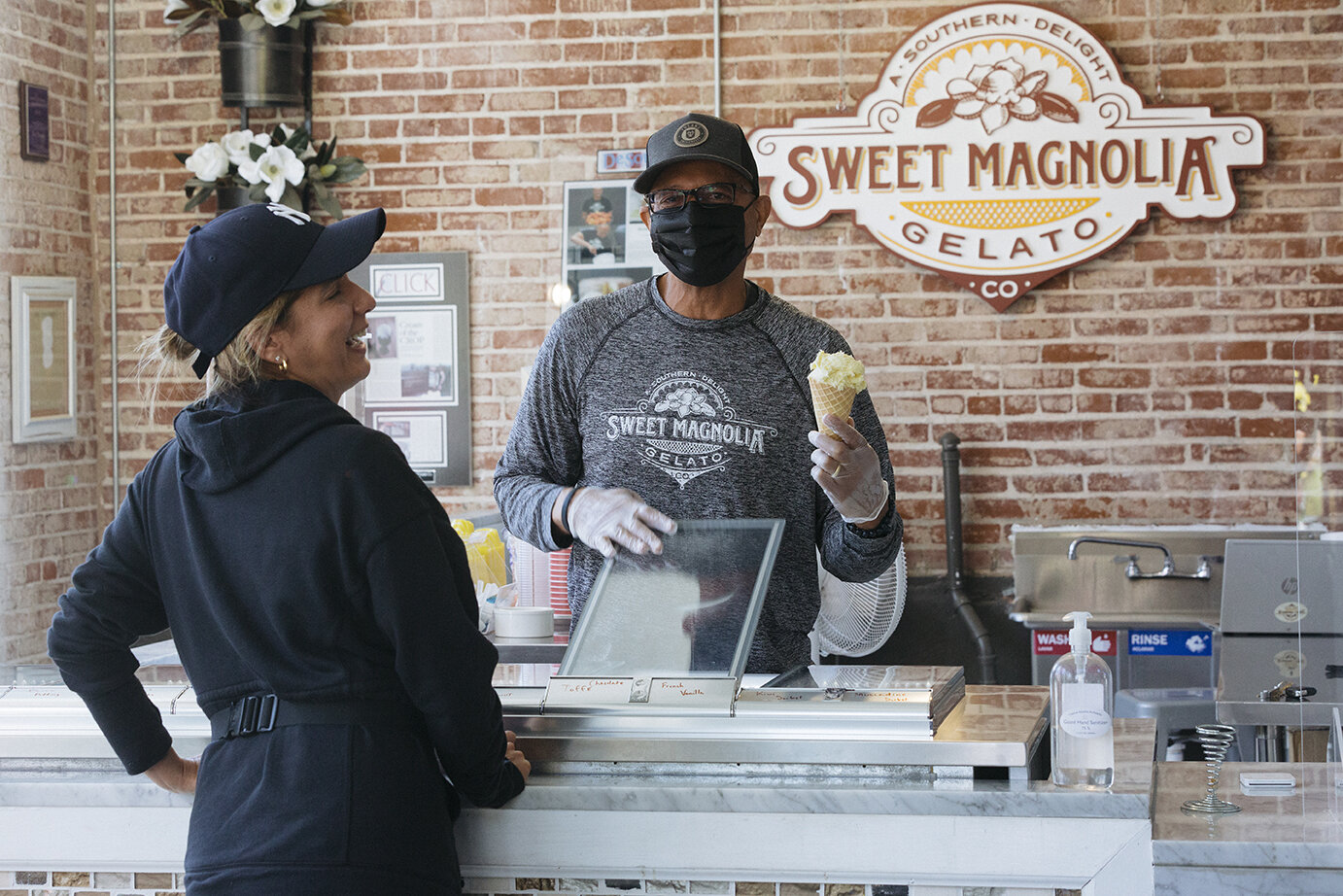 “For me, it’s always about relationships. I think relationships trump everything else. I don’t like dealing with people who have bad attitudes and who are mean to people. Particularly right now.”