It’s hard to beat the simple marriage of sea and land in Charleston, where shrimp and grits originated generations ago in the Lowcountry; today they serve it for breakfast. The Cajun version has long been a staple of New Orleans, where it’s popular at brunch and often paired with the necessary Bloody Mary.

While the two cities debate which one truly made it first, I’m just grateful the hearty combination migrated inland to Memphis, because I eat it all over town.

Whenever, wherever—no two taste the same. And I should know; I’ve tasted so many that my husband has named me a shrimp and grits snob.

The best I ever had can no longer be found on any menu. It was my third anniversary, and we were having dinner at Itta Bena; the elegance of the food matched the romance in the room. The chef created a version unsurpassed even seven years later.

I can still remember the circle of plump shrimp, the velvety cheese grits with a phantom heat at the finish.

The sauce was a take on lemon beurre blanc scattered with leeks and spicy bits of andouille. I’m the kind of girl who likes a bite of everything at once, and each forkful held a progression. First citrus tart, then shrimp sweet, ending with a surprise kick on the exhale. I actually sent a thank-you note to the kitchen before we left.

That chef was Michael Patrick, who now has his own place, Rizzo’s on South Main, but the shrimp and grits recipe has changed. It’s more akin to étouffé with a creole tomato base and smoked crawfish ladled on a mound of grits, and topped with sautéed spinach. While the update is delicious, I still like the original better. A taste of memory.

“I first learned to make it from Johnny Kirk at McEwen’s. The sauce was similar but premade,” says Patrick. “This is a dish that lends itself to change. And grits are a great medium. You can do a lot with them by adding a little flavor.”

Since my favorite’s not on the menu, he agreed to share the recipe (see below with bonus video.)

Then he recommended a gas station. 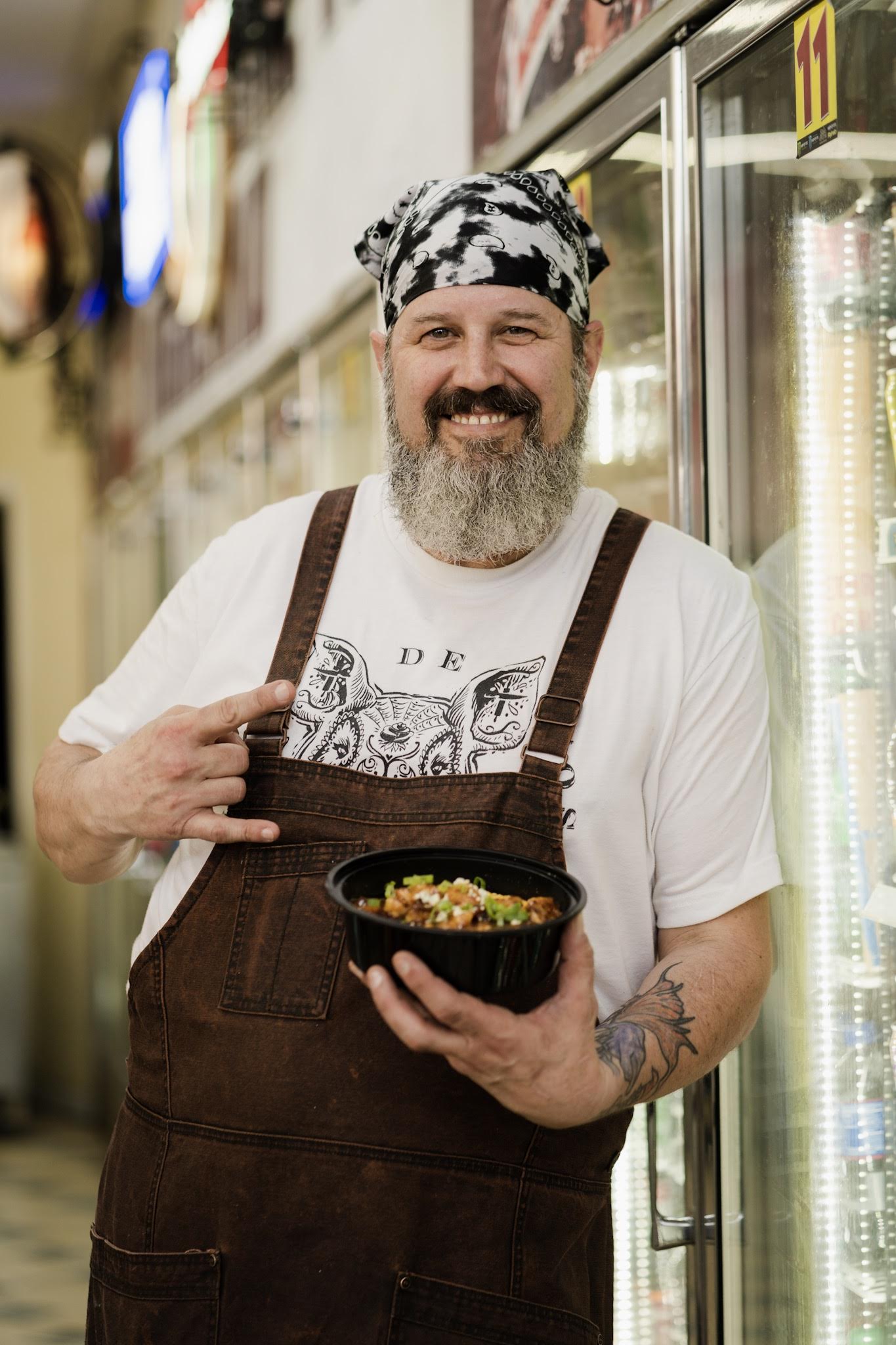 The Citgo at the corner of Summer and Highland is an unassuming place with menu boards in the window and protective glass surrounding the cashier. Past the convenience store shelves sits a kitchen counter, along with three red tables by the beer cooler—random but clean. The menu features mostly burgers and sandwiches named cleverly after musicians.

Between the Bat Outta Hell meatloaf and the Love Me Tenders, I find it: Missgrits, a bourbon, sticky, spiced shrimp over gouda grits, scallions and smoked blue cheese. Simple enough.

Chef Owner Steph Cook grew up here, moved to Florida and worked all over the South before coming back to start RAWK’n Grub in a food truck. After three years he wanted a more stable space, so he parked the truck and opened shop inside the Citgo.

Cook says his secret is the Boss sauce, named for whom you would think. He makes a bourbon reduction in large batches, strains the liquid and keeps the chunks of bacon lardons, onion and garlic for tomato jam. In Missgrits, he reincorporates the two in the pan with the shrimp. But Cook says the most important part is the creamy peppered grits, and I have to agree.

“Bring your water to a boil, and as the grits go in, you get a nice forearm workout,” he laughs.

“Keep vigorously whisking as that layer of starch forms on the top. Make sure they don’t stick to the bottom, and when it all soaks in, let it ride for a little bit.”

As for his personal shrimp and grits favorites, Cook appreciates consistency. He sticks close to home in the suburbs and says the best shrimp and grits in Collierville are at Raven and Lily. 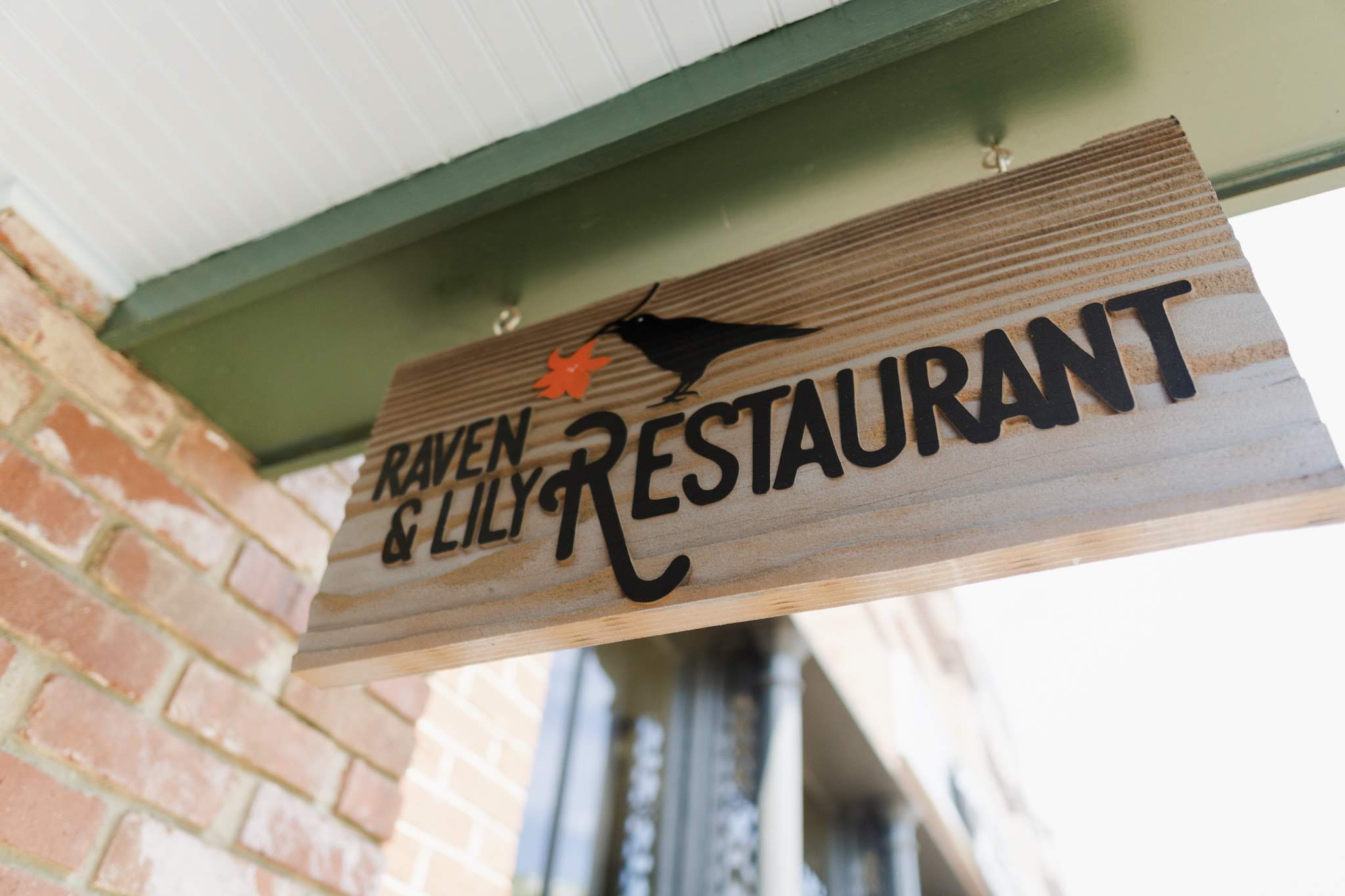 Nestled into the quaint historic town square, Raven and Lily serves a Lowcountry-specific menu. Chef Justin Young formally trained in Charleston and makes fresh mussel stock every day for the restaurant’s signature dish. Farmers often stop by his restaurant on their way home from local markets, so he takes liberties with his recipes, depending on what they have left for purchase in their trucks.

In summer he might add fresh okra, squash in fall, and carrots in spring. The result is good enough for sopping. 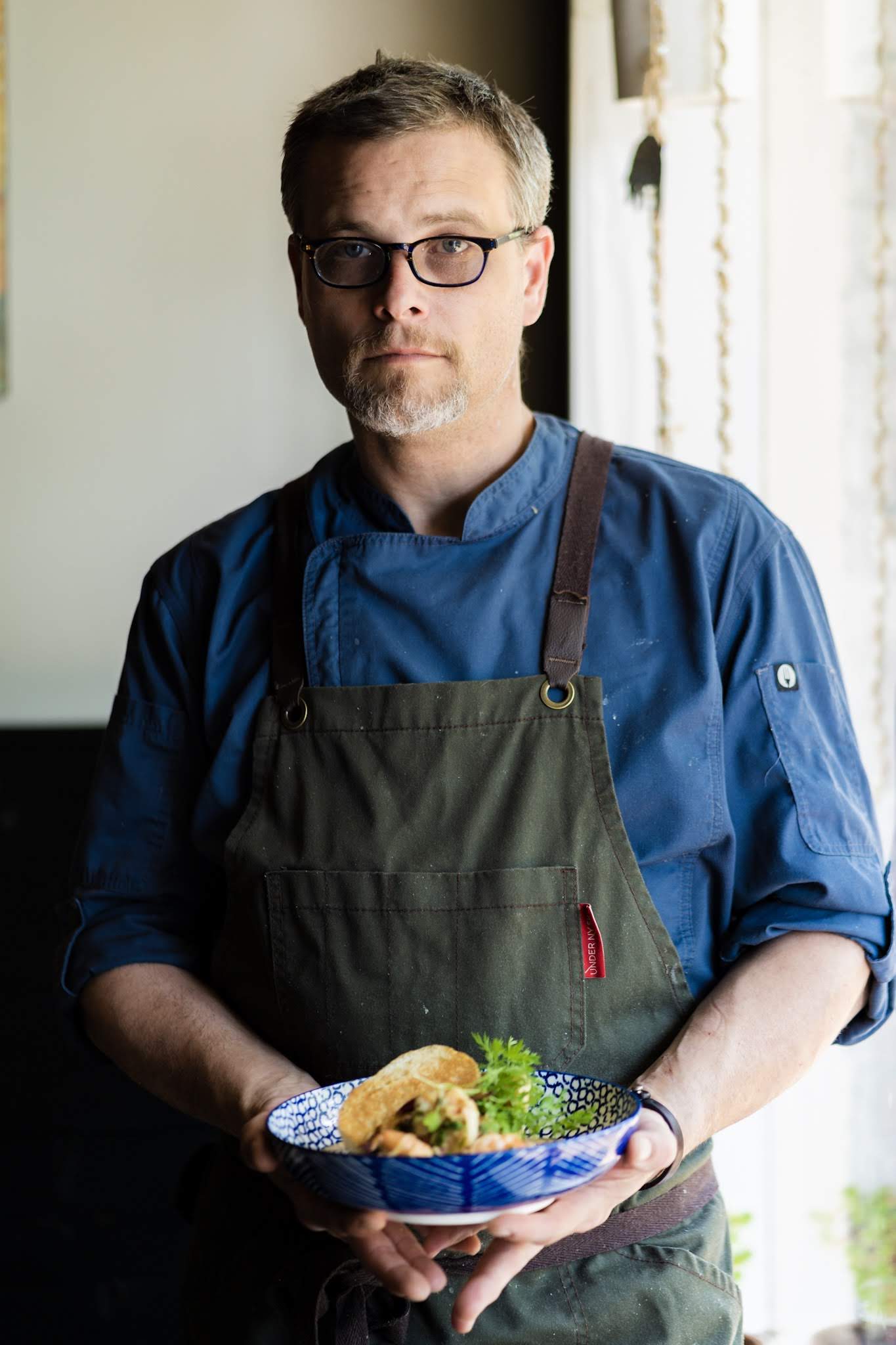 Young lives with his wife and daughter on several acres outside of Moscow. He prefers to spend time off around his own family table. “It’s been so long since we’ve eaten out in Memphis,” he says. “I really couldn’t say who else makes the best shrimp and grits.”

Defeated to be at the end of my chef-curated trail, I thank him. Then he points me in a different direction:

“Hey, what does everybody else say? You tell me.” 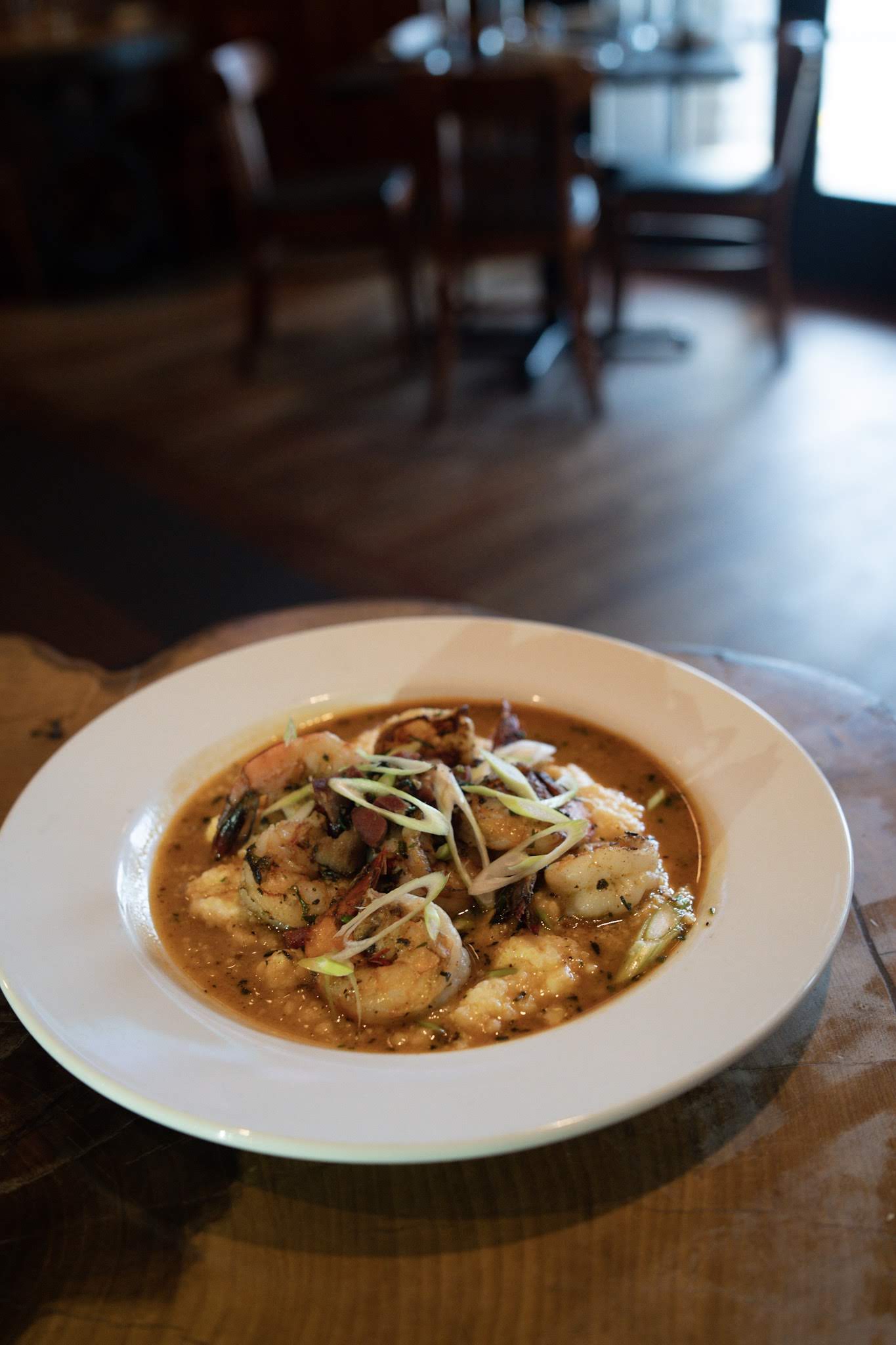 Most locals I have asked along the way mention the same place—The Grove Grill. Chef Chip Dunham has been cooking his family’s recipe for shrimp and grits since he was 13, and it’s been a staple on the menu since the restaurant opened in 1997.

“Shrimp and grits put my kids through college,” says his father, Jeff Dunham, who started the restaurant.

Chip earned his bachelor’s degree at The Culinary Institute of America in Hyde Park, then cooked around Charleston for five years, putting dozens of riffs on the dish. He used to create nightly specials: one with roasted root vegetables, one with country sausage gravy, one like Frogmore stew. 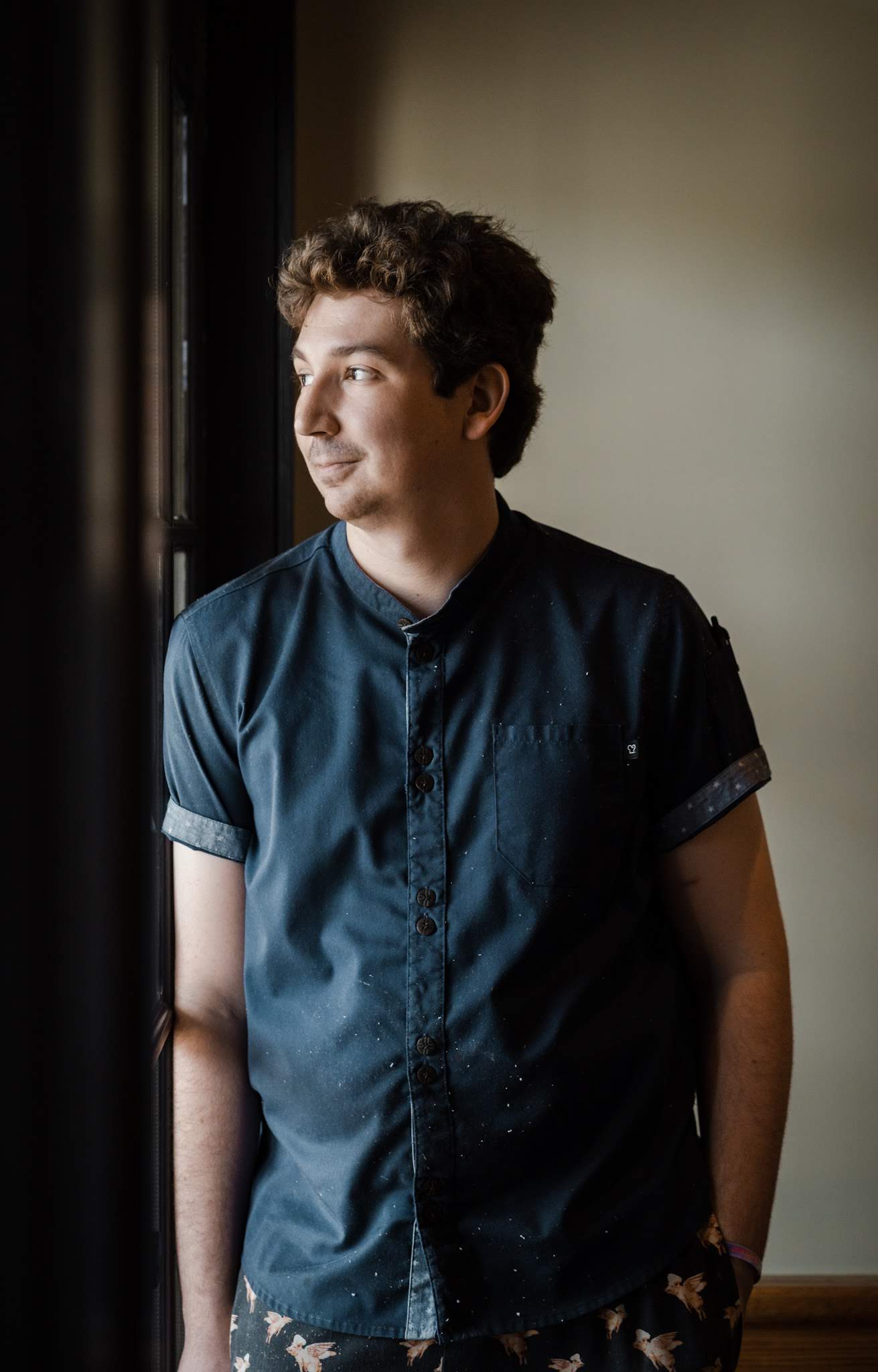 Since returning to Memphis with his wife, Amanda, to take the helm of the family business, Chip can cook the original in five minutes on the fly. The traditional flavor comes from crispy chunks of Tasso swimming in gravy.

“The Tasso ham we make in house,” Chip says. “We brine it for a week. Then we pull it out and rub it with our Cajun seasoning. Then we smoke it overnight.”

When asked where he goes to find the best shrimp and grits in town, Chip says nothing. I begin to suspect pretension until comes his ironic chuckle: “I actually have a shellfish allergy. So I don’t really eat shrimp and grits.”

Local corn, non-GMO with no preservatives, stone-ground at a grist mill in Oxford, Mississippi

Rebrand of Hanna Farm grits, made from heirloom white corn grown just across the bridge

Directions: In a saucepan, combine water and cream. Bring to a slight boil and pour in grits. Return to boil, then reduce heat to simmer. Whisk every 8 minutes for a half hour. When creamy, add cheese, salt and pepper. Cook on low for 10 minutes.

Directions: In a sauté skillet, heat olive oil and 1 teaspoon butter. Add shrimp and sauté 2 minutes on each side. Add white wine and simmer for 30 seconds. Add lemon juice. Over medium high heat, keep at a rolling boil until liquid reduces by half. Add andouille and stir. Add remaining butter in small chunks, stirring constantly until creamy. Add leeks, salt and pepper.

Mound half of cheese grits in center of bowl. Place shrimp, tails up, in a crown around grits and pour sauce over the center. (Save the second half of the grits for later, or double the shrimp recipe and make it a meal for two.)

Candice Baxter writes on homegrown food and raising independent kids. Her work is featured in the Memphis Flyer, Memphis Parent and others. Currently completing her first full-length manuscript, she chronicles the road to publication and midday meals with a mentor at So Lit Lunch on candicebaxter.com. @cbaxsquared