When Tim and Lena Barker, owners of Edge Alley, met in 2008, they each were managing different kitchens.

Tim was at the Beauty Shop while Lena was running point downtown at Automatic Slim’s. They both worked a lot, as service industry folks do. Local restaurateur Karen Carrier owned both establishments and was about to sell Automatic Slim’s, an upscale staple of downtown for more than 20 years. Karen loved Lena’s work ethic so she created a position for her at the Beauty Shop and Do Sushi (now Bar DKDC). Lena helped create and execute the lunch menu at Do Sushi, Memphis’s first noodle bar, and helped take the Beauty Shop’s Sunday brunch to the next level. Unfortunately, Do Sushi didn’t make it, but Lena stayed on to work at and help Bar DKDC evolve.

“The first time we met was at the Beauty Shop Christmas party at the original Gus’s Fried Chicken in Mason, Tennessee,” says Tim.

“We were both newly single, and I could tell Karen was up to something.” 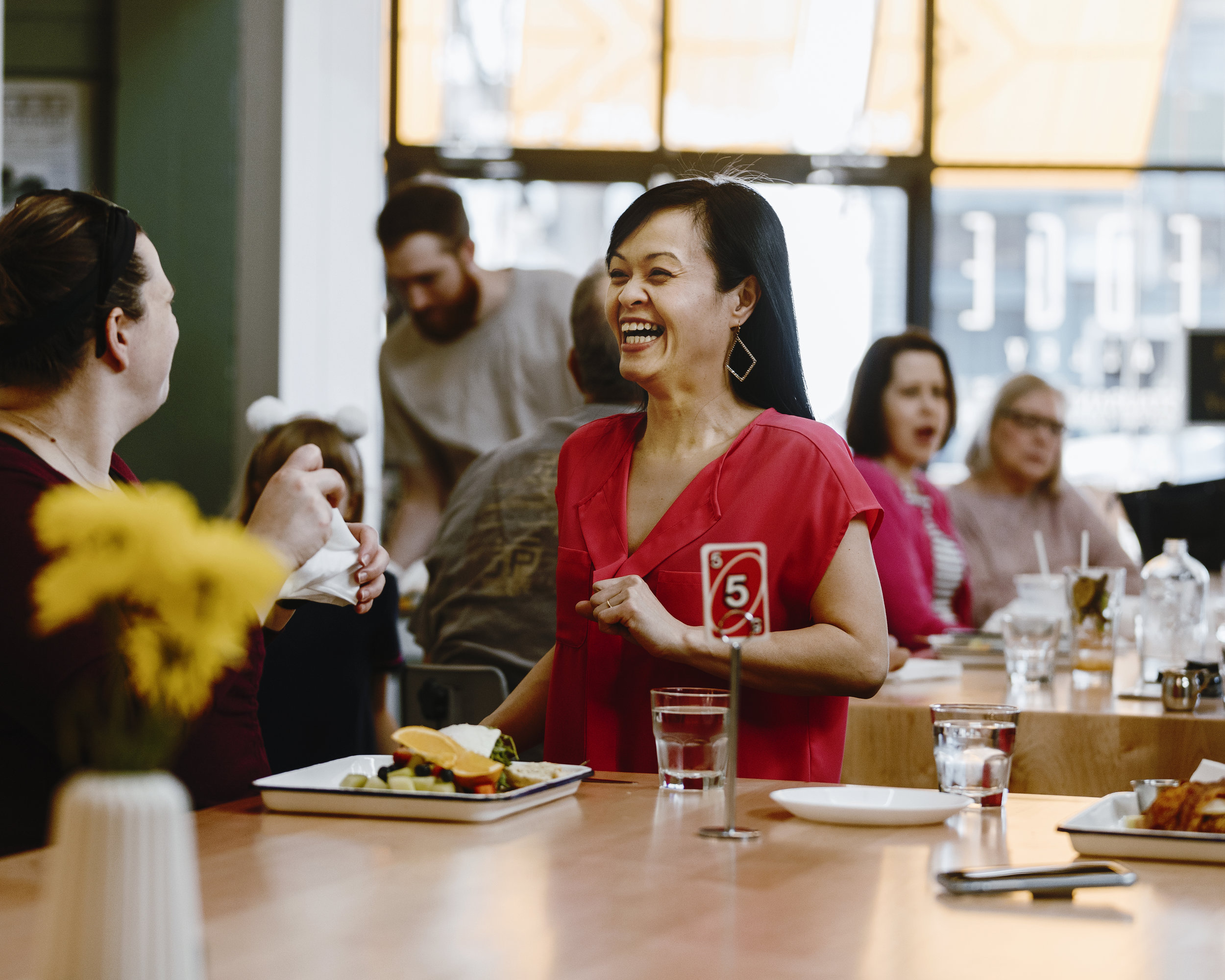 At the time Lena was more into Tim’s friend. She liked Tim—but not in that way. Or so she thought. She was also not a fan of his beard.

“Tim is very persistent and has a dry sense of humor, but once you get to know him, he’s hilarious,” adds Lena with a smile.

Their first date was at the Orpheum Theatre to see the Ballet Memphis production of Barramundi. The ballet was great, but you can’t really get to know anyone at a performance. But afterwards they went to Young Avenue Deli with Tim’s friends from the cast and really started getting to know each other. The drinks were flowing, and meeting in a larger group made the interaction vibrant, exciting and fun.

While Tim is a native Tennessean, growing up in nearby Martin, Lena is originally from Bangkok and moved to Las Vegas, Nevada, when she was 14 to live with her aunt and uncle. Her parents believed that life in America would offer her opportunities that Thailand would not. Lena went to school during the day and in the evening worked at the family Thai-Chinese restaurant until she moved to Memphis.

Lena learned a lot at her family’s restaurant in Vegas, but what she remembers most is the customer service side of running an eatery—something she would carry over into her roles at Automatic Slim’s, Do Sushi, the Beauty Shop and now Edge Alley.

Lena really loves guest interaction, while Tim’s strengths are in the back of the house. 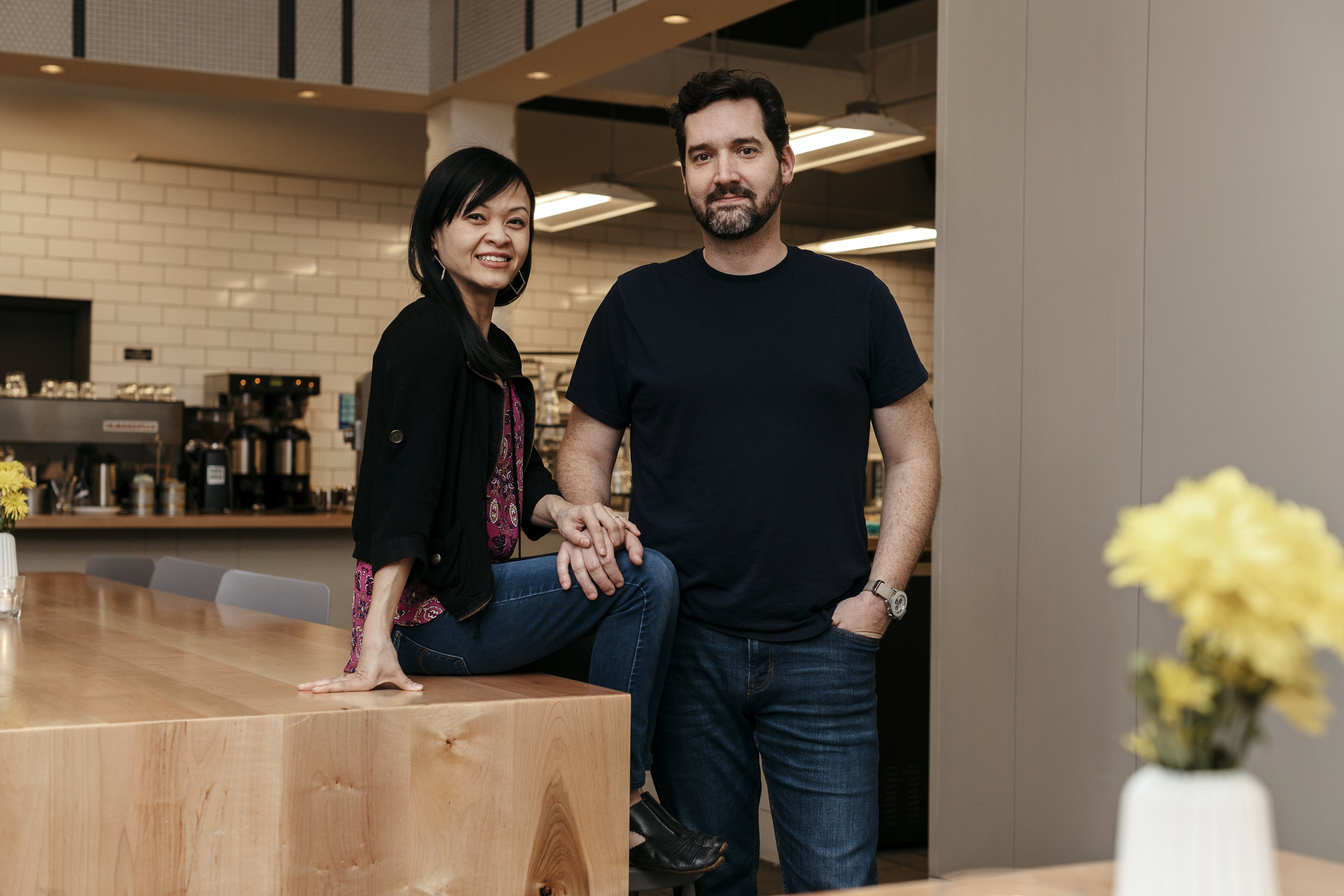 The couple got engaged in 2013. With Lena’s family living so far away, they decided to take a trip to Thailand to share the good news of their engagement. Tim couldn’t speak a lick of Thai, but before he knew it, they were saying their nuptials in front of all of Lena’s relatives.

“I was so ready to marry Lena, so the ceremony was a welcomed surprise,” says Tim.

“My mom invited kids, elders, everyone,” Lena says. “It was their only chance to see the wedding. It was essentially a family reunion.”

A traditional family ceremony with a modern twist, this was likely the only way for Lena’s family to share in the splendor of her wedding day. They made it official at a courthouse in downtown Memphis a few years later. 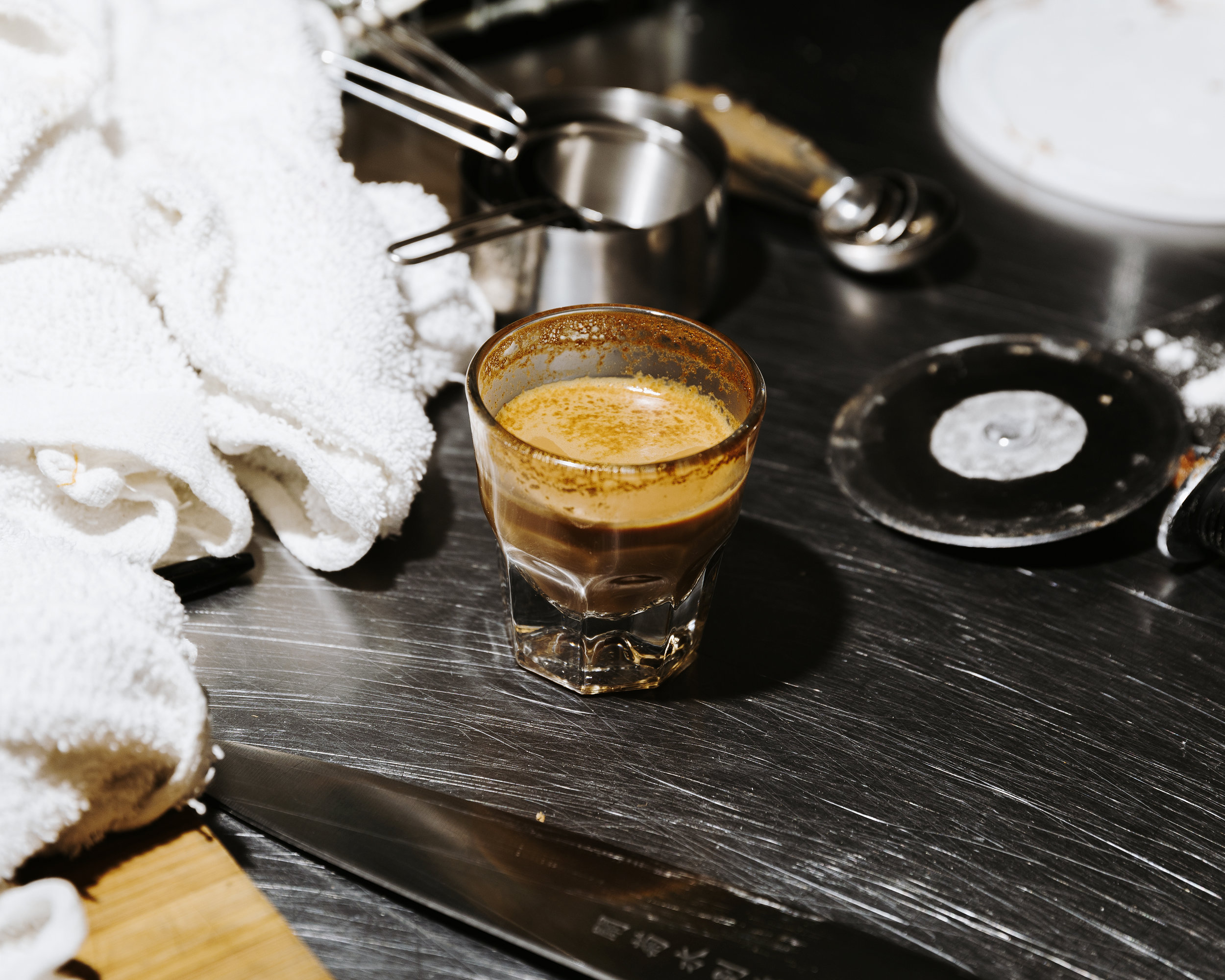 These days, Tim is working 90 hours a week pouring everything he has into Edge Alley. Lena works at LeBonheur Children’s Hospital as a radiologic technologist but is still very involved with Edge Alley, especially during the busy weekends. Lena also manages all things administrative for Edge Alley.

When Lena and Tim do find time to cook together, she tends to cook all types of Asian cuisine, including beef kimchi stew and pad thai. 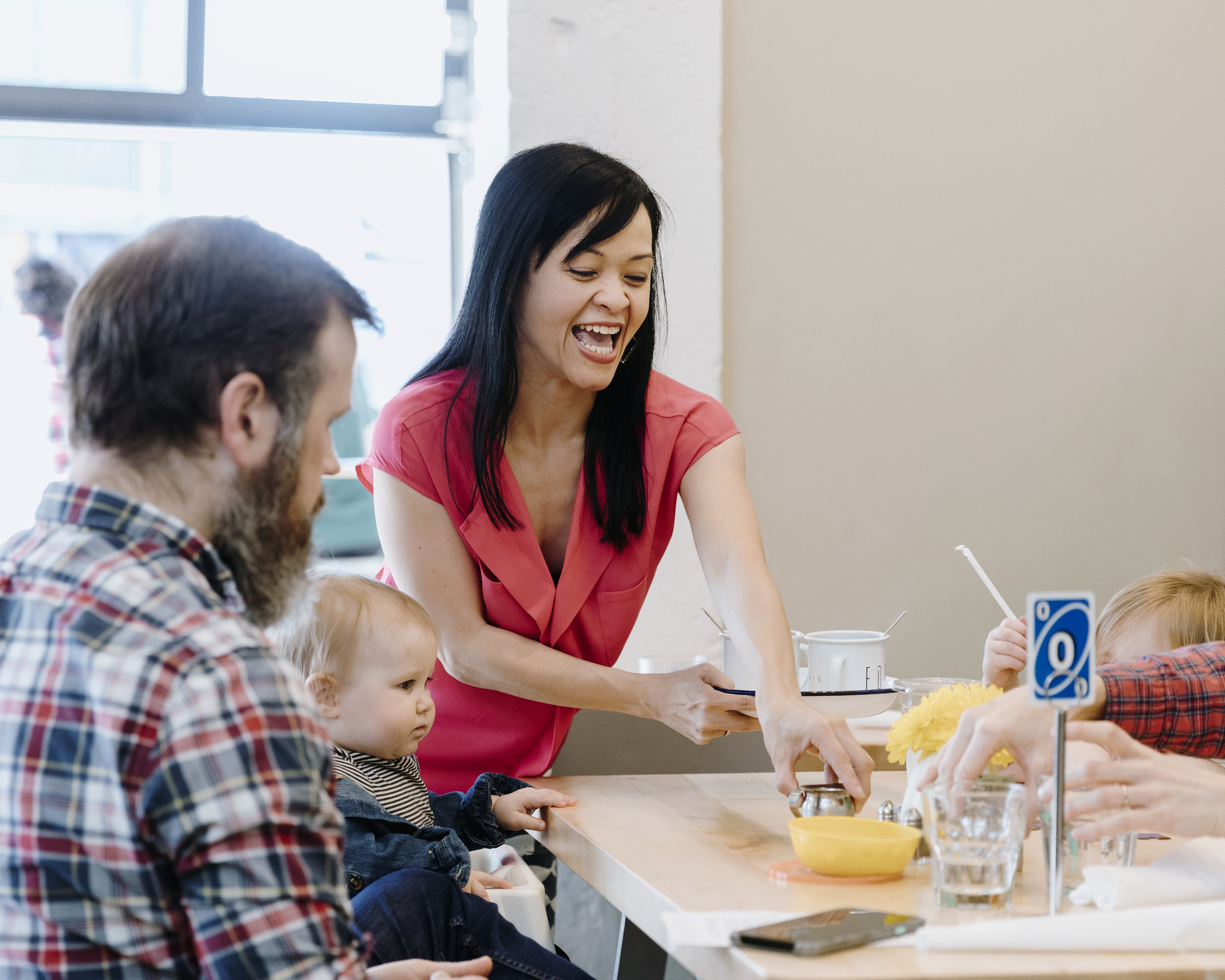 “I like to eat simply using lots of ethnic ingredients. Tim likes to use every pot and pan in the house when he cooks, but he can make anything.”

The couple also enjoy eating out, watching spy movies, discovering rare finds at estate sales and of course spending time with the other love in their lives, Sam, a chocolate pit mix.

They say there are some things that people who know them only from their restaurant work might not realize about them.

“She’s very good at being the face of Edge Alley, but she’s also much deeper of a person than people know,” Tim says of Lena.

“Tim looks serious and straightforward; he speaks his mind and fights for what he believes in,” says Lena. “He is sensitive and passionate about his work.” 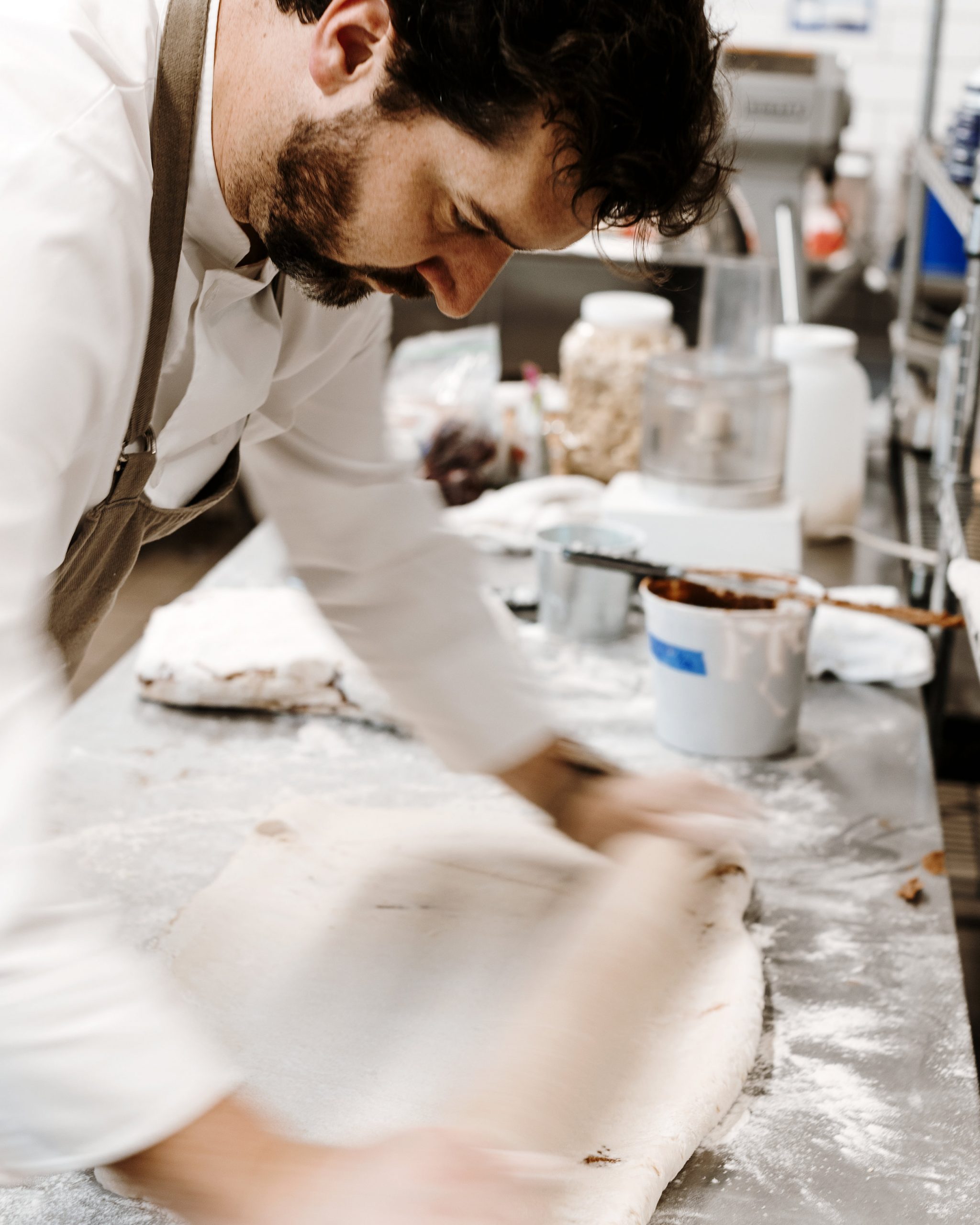 Aside from spending most of his time at Edge Alley, Tim also runs Table and Bar Consulting Group, where he’s done restaurant and food service design projects for establishments in markets from Chattanooga to Boulder.

From studying at and eventually dropping out of the College of Culinary Arts at Johnson & Wales University in Providence, Rhode Island, to opening up Edge Alley in a developing part of downtown Memphis, Tim is always willing to try new things. For instance, he intended to include micro-retail as part of Edge Alley’s original concept. The spaces are evolving to include room for more seating, a space for an artist-in-residence program and an art gallery. Plans include an exhibition spearheaded by photographer Houston Cofield. [Editor’s note: Cofield’s photography is featured in this story.] 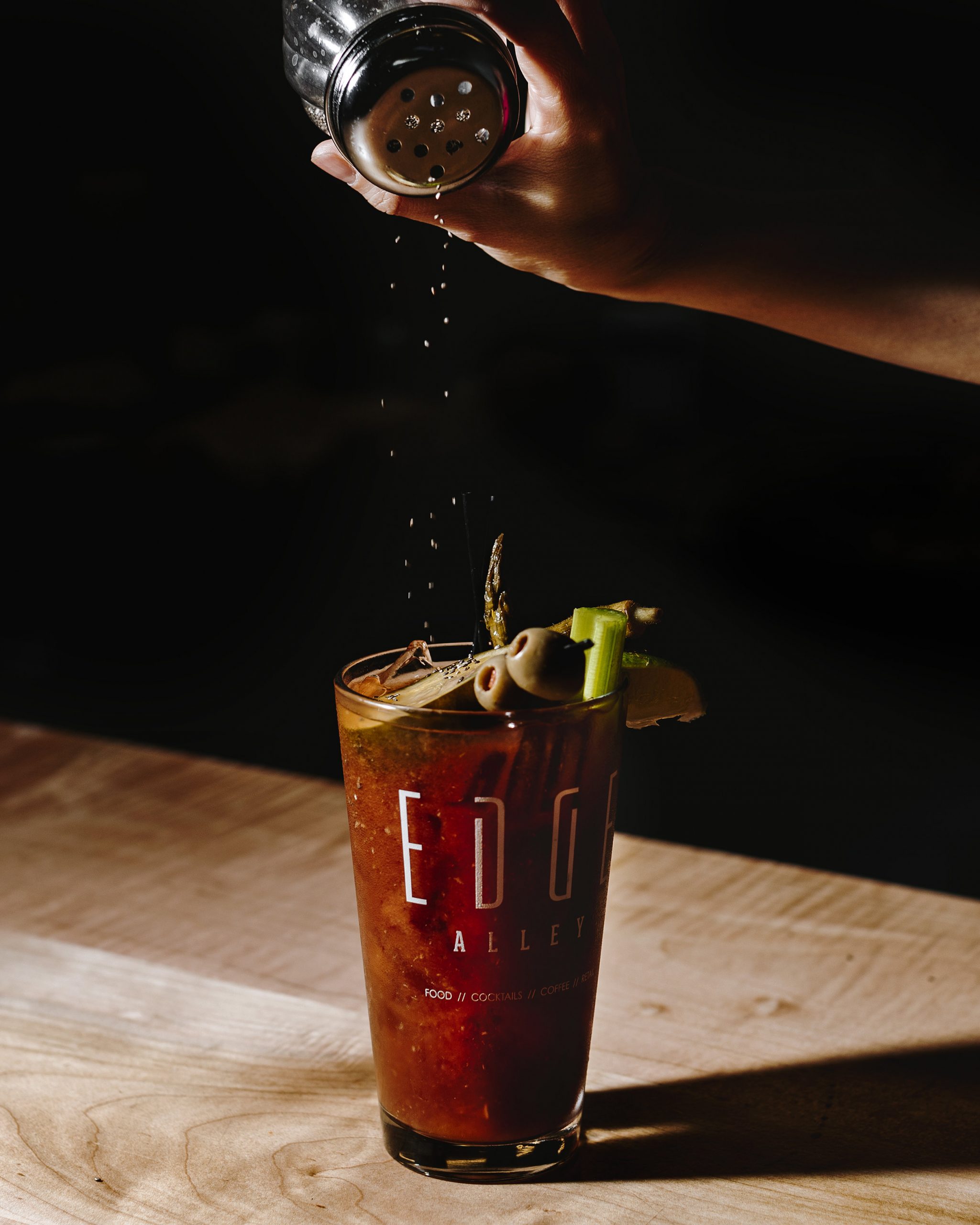 Edge Alley focuses on limited, seasonal menus for breakfast, lunch, brunch and dinner, all of which have seen recent updates.

“We are one of only a handful of specialty coffee roasters in Memphis, and we have an amazing cocktail menu,” adds Tim.

“I want us to be great at what we do, rather than expanding our menus to the point where they become unmanageable,” Tim says.

Being in the Edge District before most others, Tim and Lena are ecstatic about the new developments coming their way.

“Growth is paramount to the success of our neighborhood, so we are just thrilled to welcome more businesses, restaurants and tenants to the Edge,” says Tim.

As far as their relationship goes, they are good at one thing—supporting one another. And part of that is pouring everything they have into Edge Alley.

“From quality food to authentic service, we love that we get to share Edge Alley with everyone,” says Tim.