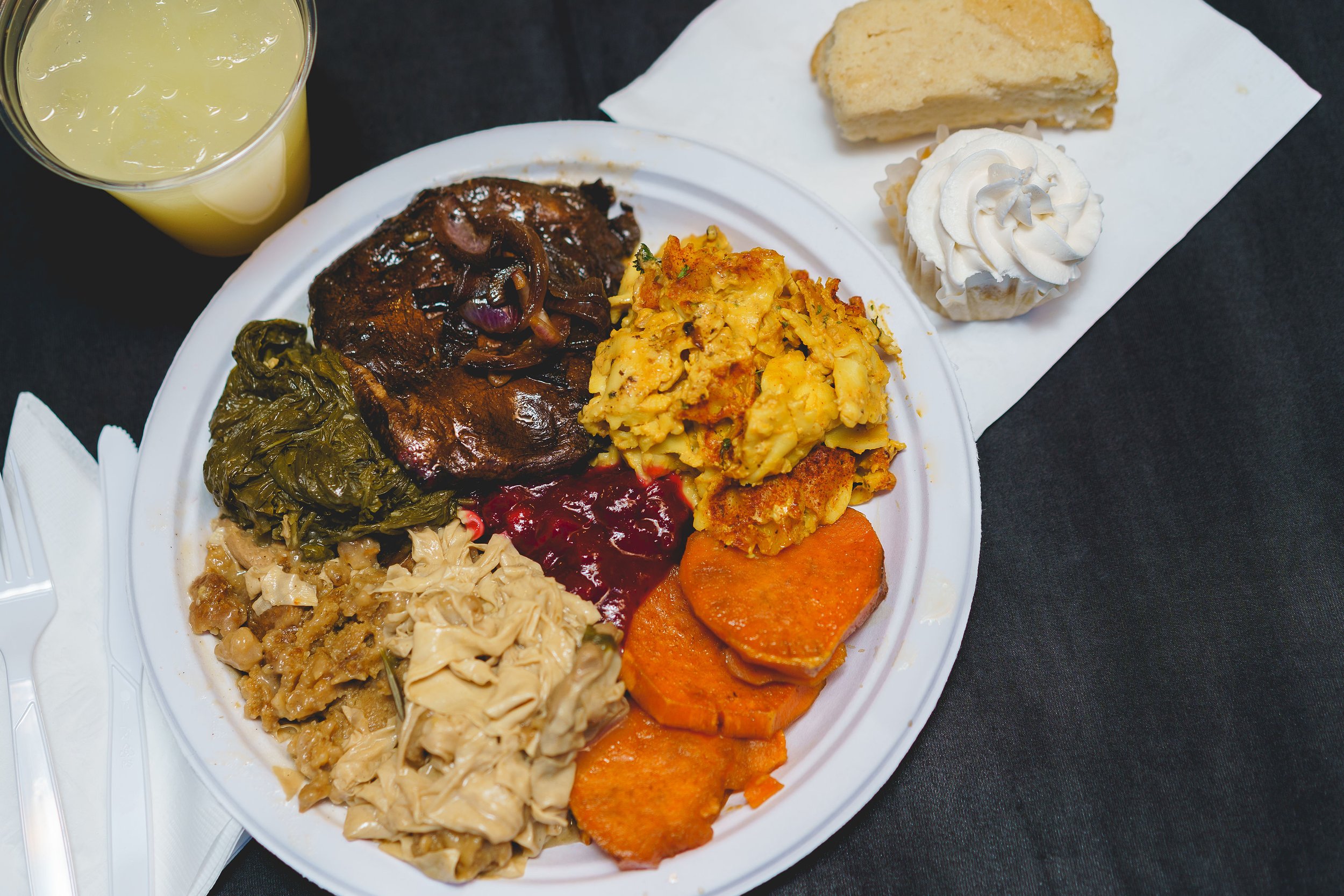 It started with a direct message on social media. Ayesha Collier, owner of Sun of a Vegan, was getting ready to participate in the inaugural Memphis Vegan Festival, hosted by event producer and curator Cynthia Daniels during the 2021 Juneteenth weekend.

As a new business owner, Ayesha researched some of the other vegan food vendors. When she saw that other Black, female business owners were participating, she reached out to them. Post festival and after more conversation, the ladies realized they needed to meet.

Daishu McGriff, owner of Shroomlicious Meals; Francesca Kinsey, owner of LiveYaLife Juices; Donnesha McKinney, owner of Thicc Ass Vegan; and Ayesha decided to come together for a New Orleans-themed meal. On July 26, 2021—as the ladies bonded over their vegan versions of strawberry shortcake ice cream, shrimp creole, chickpea gumbo, poboys, and stamina juice—the idea for The Vegan Table 901 was born.

The Vegan Table 901 is a collective of four Black women who each own a vegan business. Today, through The Vegan Table 901, these women work to empower each other by creating a network for women of color in business to share and offer opportunities. They’ve curated experiences for the community by setting up and serving vegan food and have participated in local events.

With openness and honesty, the women have bonded over business and their journeys to vegan and plant-based lifestyles.

Through their collective knowledge and experiences, they hope to help each other build their businesses.

Though The Vegan Table 901 is not yet open to other businesses, the ladies say it may be in the future. For now, at less than a year old, they are focused on building the foundation of the group with the four of them. 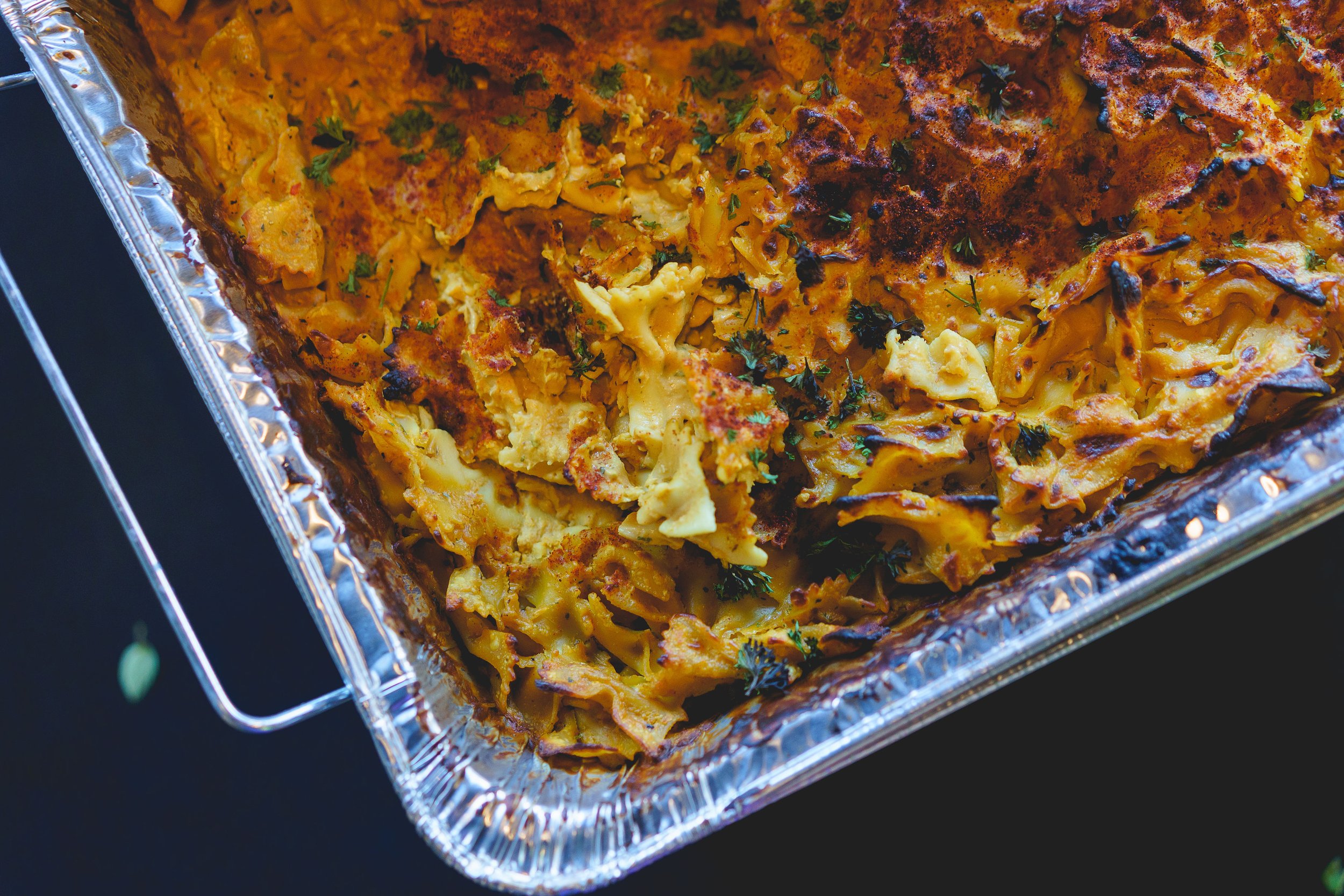 The women discuss everything from family to business over group calls. They share their experiences as both new and seasoned business owners, giving each other the space to reflect and ask questions.

“We’re able to say to each other, ‘Did you think of it this way? Did you think about this?’ or ‘Can you do this?’ or ‘Here is a number; try this.’ The collective is important because we are a community. It’s an amazing, beautiful thing—especially when women of color can be seen in a light of building togetherness and love,” Ayesha says.

Daishu says she can already see the power and impact in their collaboration. The chemistry of the group is natural.

Donnesha is excited for the group to grow as the vegan scene in Memphis grows and changes. She has lived in Memphis for two years; when she used to visit the city, she found few vegan options. Through this collective, she hopes to provide more options and awareness.

“It takes a village to raise a child, and I feel like we are the village and veganism is that child— especially in Memphis, because we need some help here!” she says. 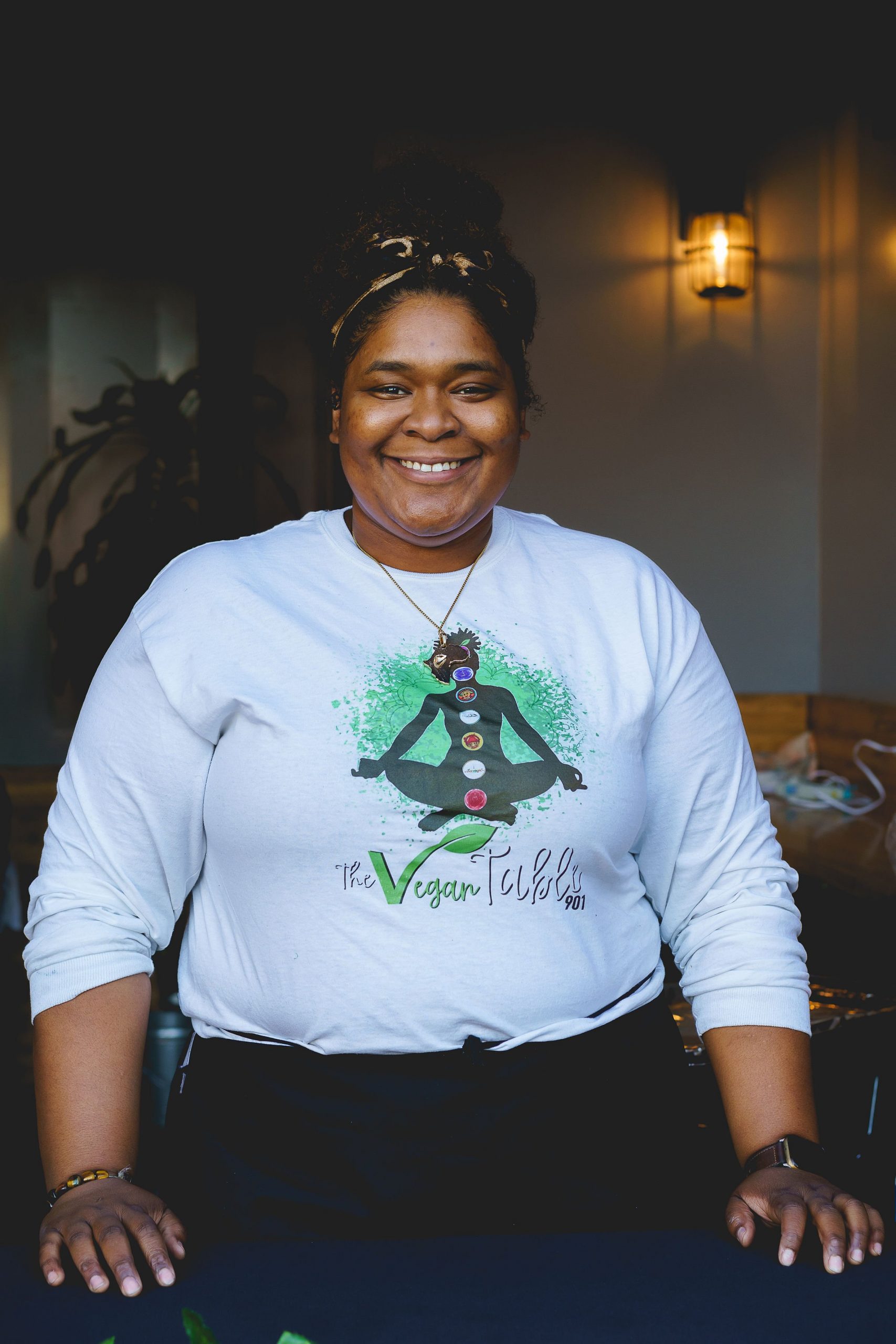 Daishu started Shroomlicious Meals by posting meals and recipes on her personal Instagram and TikTok pages. As she transitioned to a plant-based lifestyle—leaving behind dairy, chicken, beef, and pork—she began posting more plant-based meals, particularly with mushrooms, hence the name of her business.

“I was a pescatarian at the beginning of 2021, but cooking plant-based food directed me to live a more plant-forward lifestyle. I still do creative videos on my personal page, and I now serve the community through Shroomlicious Meals,” she says.

“My mom, grandma, and dad cooked all the time, so I was always around the spirit of home cooking,” she says.

She also worked as a marketer in the food and beverage industry. Working closely with executive chefs, she learned about presentation and different types of food.

“My passion for food grew, and I used it as therapy during a challenging period in my life,” she says. “That time curated my current path, and it has been a joyful journey of healing and sharing my passion.”

Daishu’s favorite dish is her deep-fried portobello burger topped with Asian slaw. Her customers love her vegan chili. “It’s a comfort dish that I don’t think most of my clients realized could be veganized,” she says. 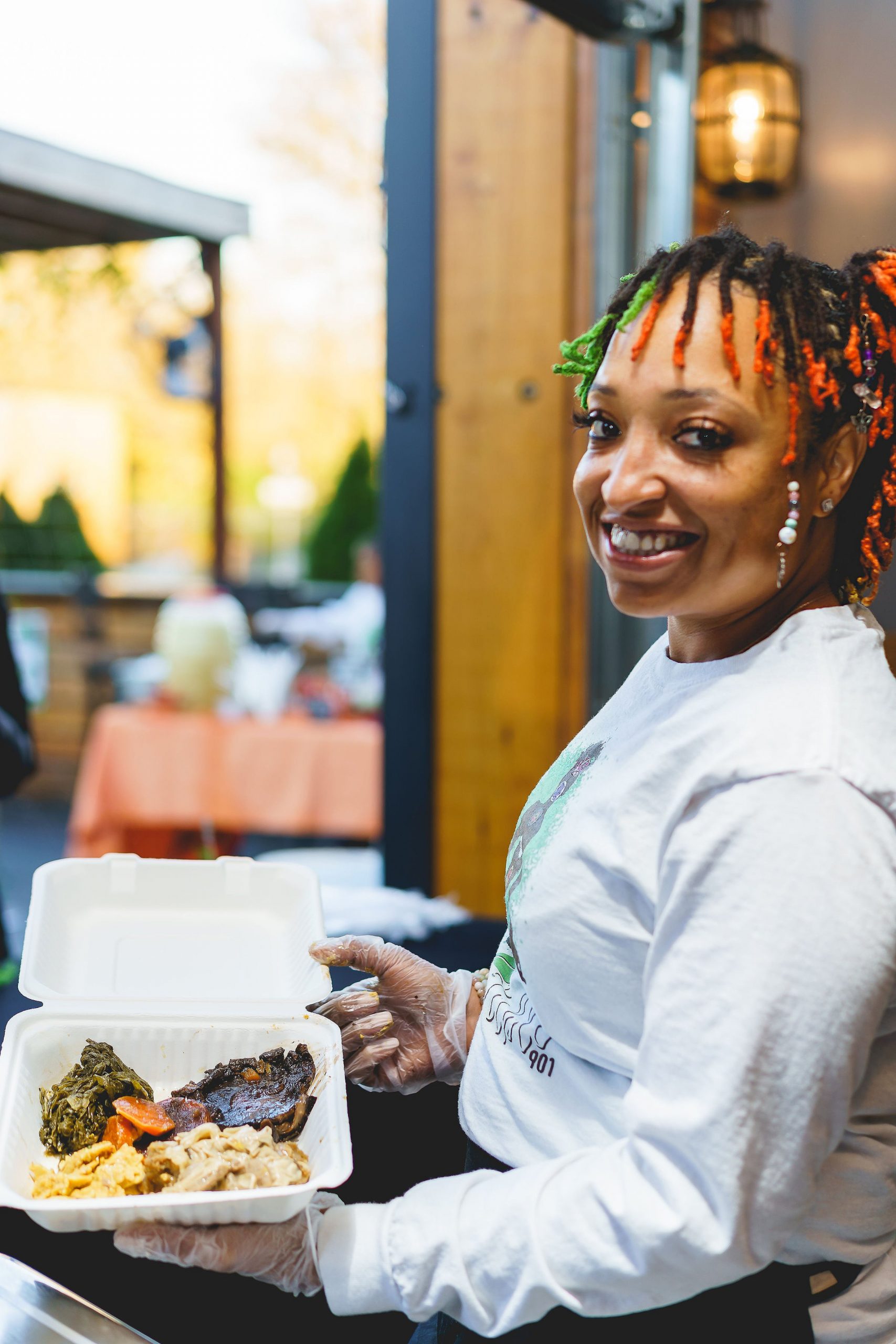 Ayesha Collier
Sun of a Vegan

Ayesha started Sun of A Vegan in June 2021. The Memphis Vegan Festival was her debut event. She says she always knew she wanted to do something with her passion for cooking, but struggled with knowing what that would look like. She attempted to start a few home-based food service businesses that “didn’t really go anywhere.”

“It wasn’t until I determined my own personal ‘why’ that it became apparent how I wanted to serve others through my love of cooking,” she says.

“It was through healing myself of depression and gaining a better relationship with food that I discovered I wanted to share my gift with others.”

She lost weight and gained an overall better state of health. At the same time, she became aware of the increase in dialysis centers popping up in her community. She wanted others to know about the simplicity of healing oneself through the power of plants.

“It’s important to me to engage with my community through my work. I am always listening for their feedback and educating vegans and non-vegans on the power of a plant-based diet,” she says. “I am meeting people where they are and providing them with creative and flavorful meatless options that will hopefully help them to eventually become more plant based. It only takes one meatless Monday to evoke a change, and if one of my meals is on the table on that Monday, it’s a win in my book.”

Sun of a Vegan’s most popular dish is the five-layer lasagna. But Ayesha’s personal favorite meal to cook is tacos—black bean and rice with “cheese” corn tortilla shells. “In my hometown of Chicago when I was a little girl, we used to frequent a taco shop that served cheese tortillas with meat,” she says. “It has remained a favorite of mine, and I veganized it.” 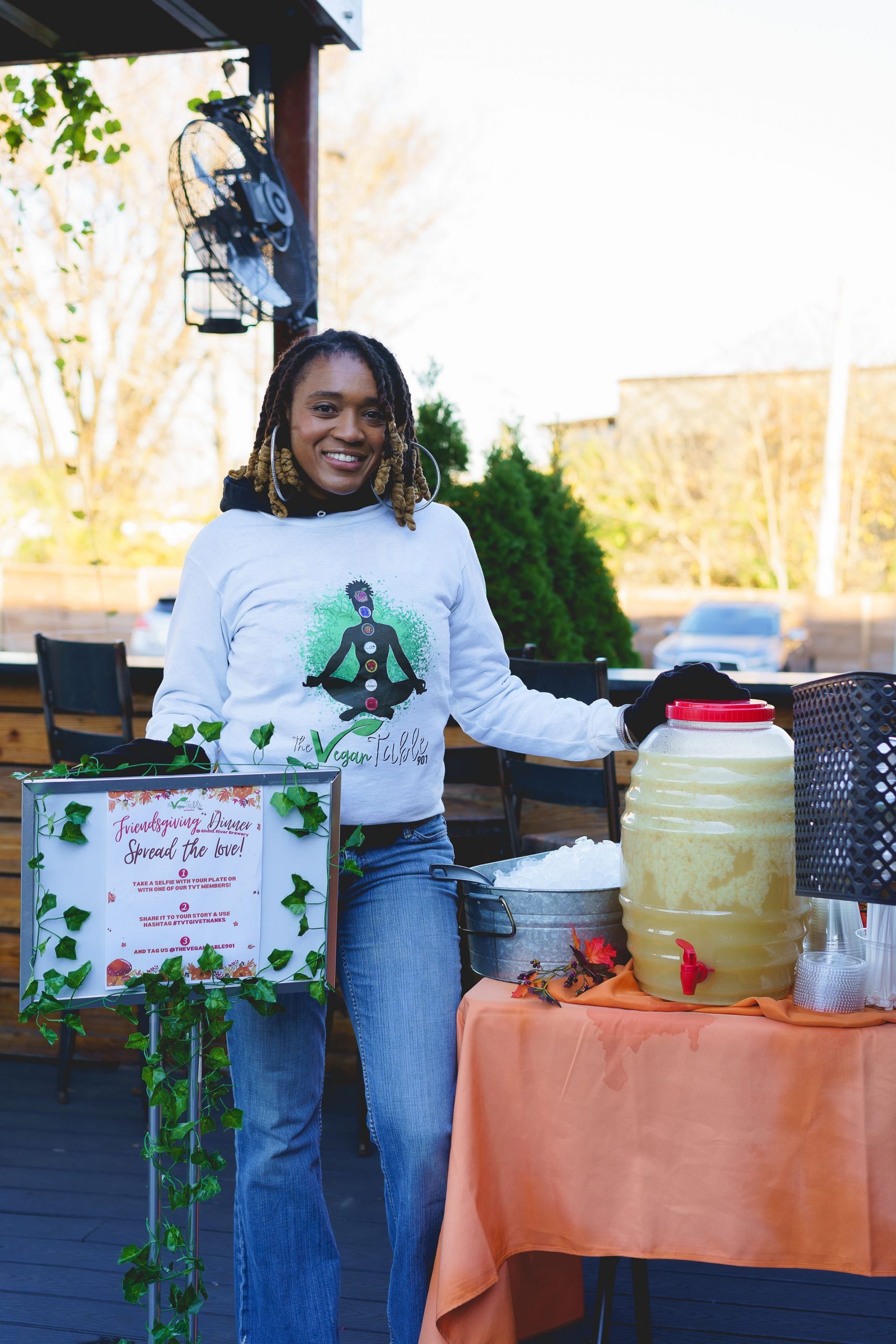 Francesca has always loved food and calls the kitchen her happy place. As a college student, she worked as a food demonstrator at Kroger and Walmart and taught nutrition classes as part of an internship. After college she became an educator.

She eventually developed kidney stone problems. And, after visiting numerous doctors and specialists, she turned to divine intervention for an answer.

“I asked God to show me how to heal this problem holistically,” she says. “To stop my kidney stones from forming, I began detoxing and cleaning all of my body systems, especially concentrating on the renal and urinary systems, where the kidney filters blood to produce urine and get rid of waste.”

“I wanted to share with others what God led me to create for healing my body.”

So she founded LiveYaLife Juices. Green Glow Juice is her most popular product—and her personal favorite. “It helps to heal your heart chakra, and green vegetables aid in clearing your ‘gut brain,’ which is your digestive system,” she says.

One of her most recent creations is her Organic Real Lemonade. “All ages love it!” she says. 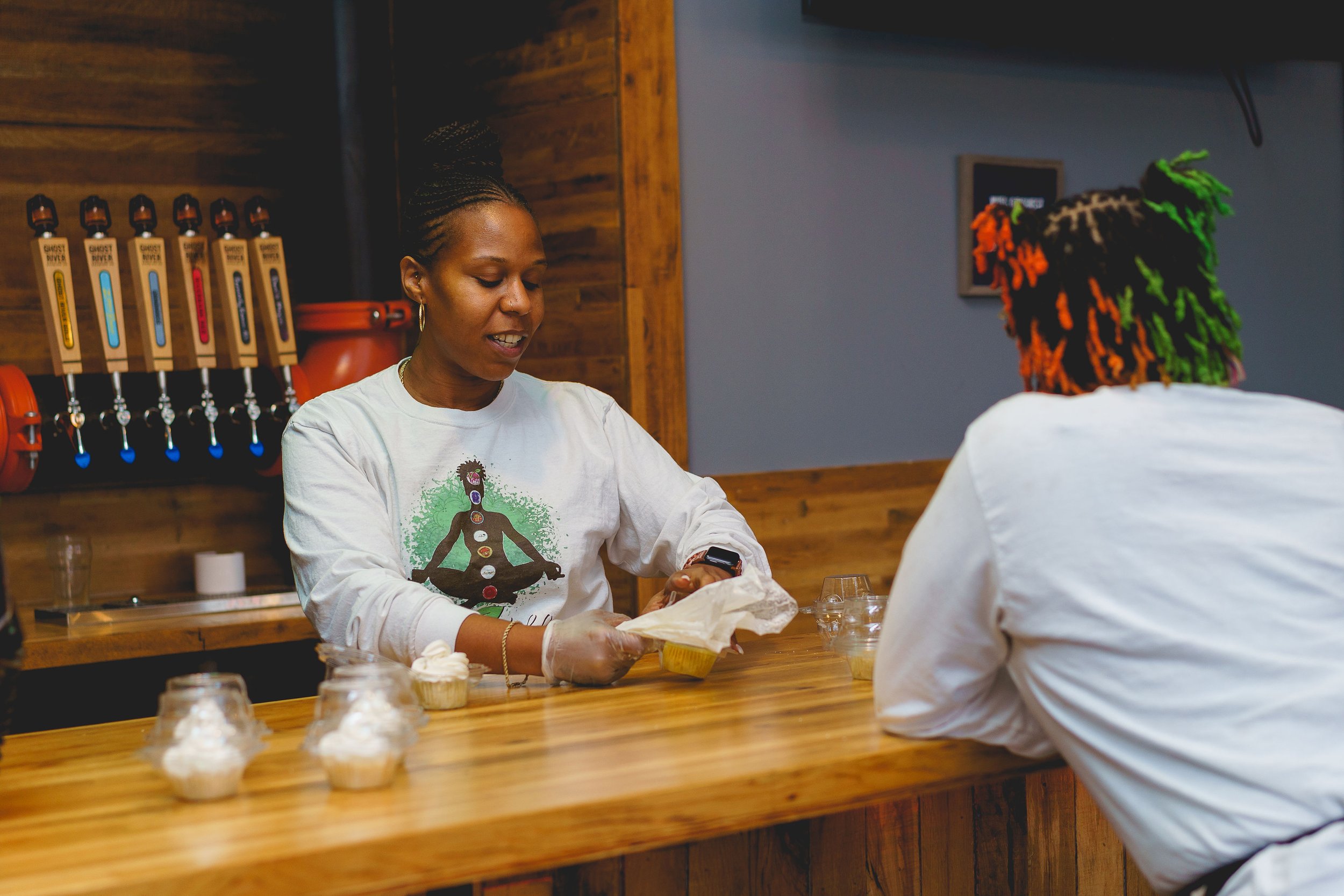 Donnesha started Thicc Ass Vegan to give underprivileged communities a chance at healthier eating without the outrageous prices. She says that, when money is tight, people tend to gravitate towards what’s least expensive. But she believes that health shouldn’t have to be compromised because of low funds.

Donnesha says there is also the misconception that vegan food is boring and bland—so she set out to prove that healthy food can be affordable and taste great.

Before her business started, she was on a weight-loss journey and tried a 30-day vegan challenge. She couldn’t stick to the challenge because she owned a baking business, Nesha’s Sweet Cakery, and it was difficult not to taste her own products. She decided to become a vegetarian instead.

“About four months later I was more comfortable not trying my final products and decided to try veganism again. I sat down with a Daiya [dairy-alternative food brand] pizza, a glass of wine, and watched What the Health on Netflix. I never turned back,” Donnesha says.

One of her first vegan recipes to develop was Smaccaroni.

“My goddaughter and I are mac and cheese lovers, so it was imperative to get this recipe right early in my journey,” she says.

Customer favorites include her alfredo and desserts like peach cobbler cupcakes. 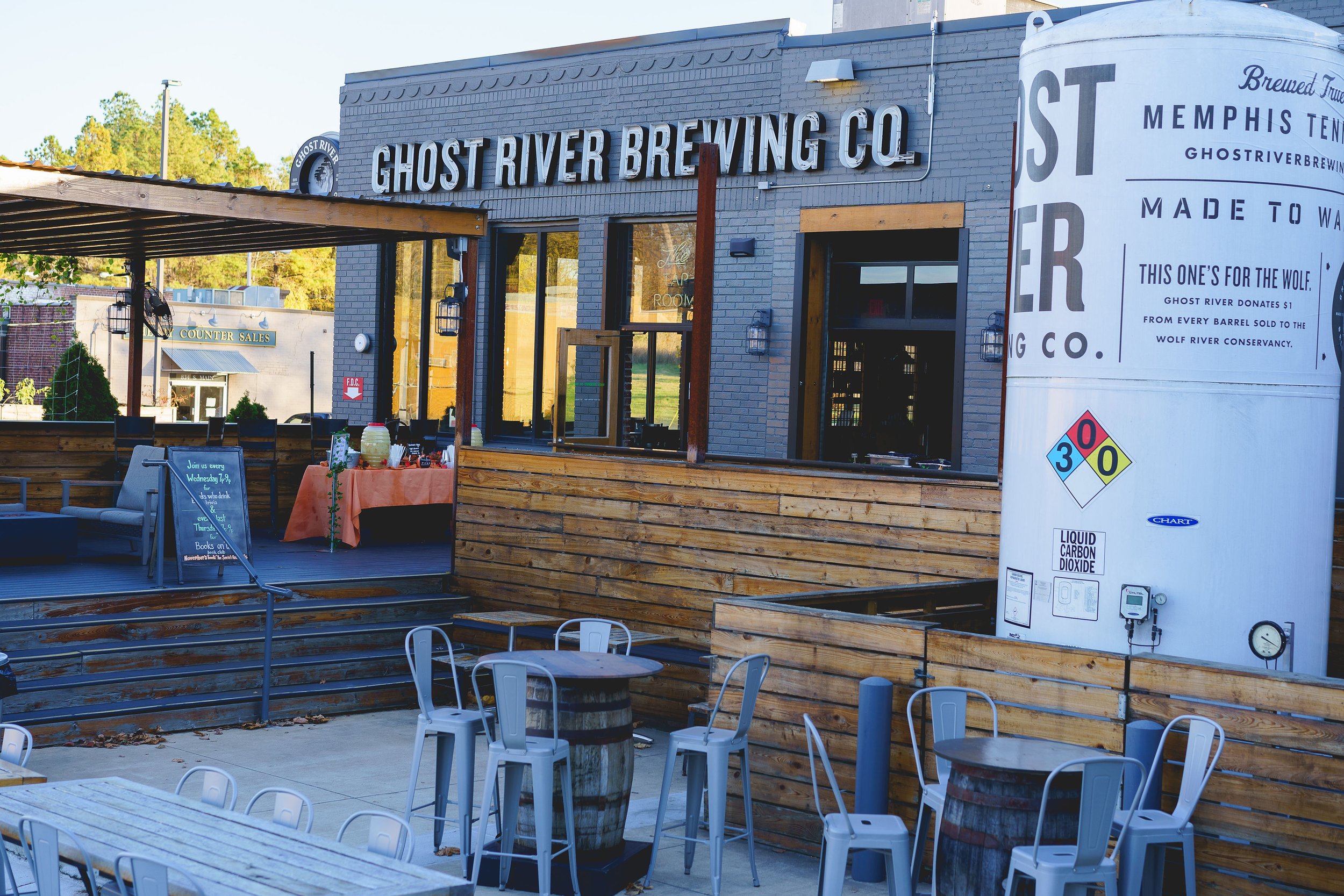 Read more about The Vegan Table 901 on Instagram @thevegantable901 and look for their pop-ups around town. They regularly set up at Ghost River Brewing on Main Street on Fridays.

Erica Horton is a freelance journalist that loves to learn and write about almost anything. @howtoloveanerica

Alison Stukenborg is a food and branding photographer who has been working in the region for over a decade. She enjoys partnering with small businesses to provide content for their websites and social media spaces. She is wife to Shawn and mom of three and occasionally loves a rye old fashioned and dystopian YA novel to escape the busyness of daily life. @alistukephoto