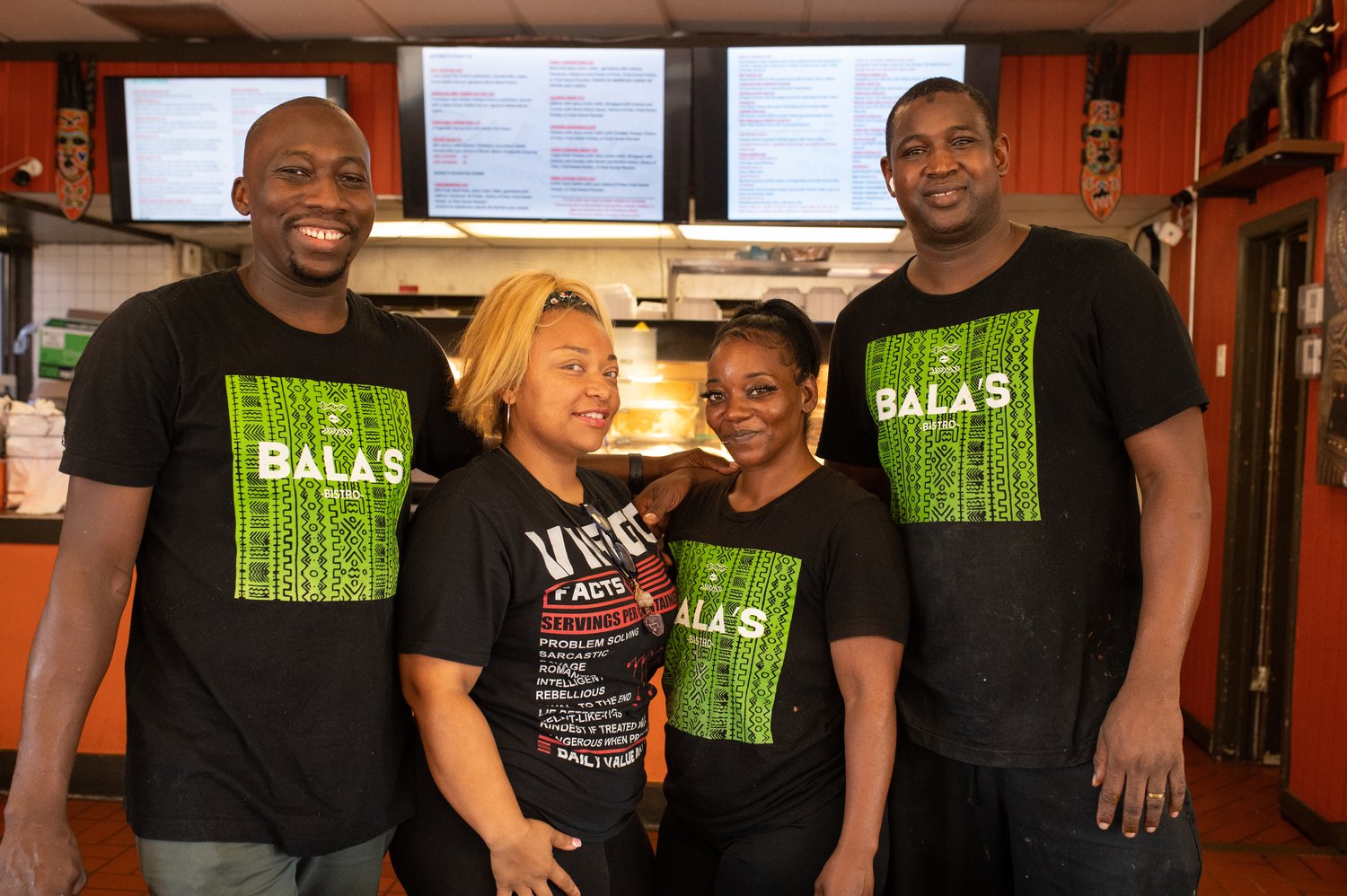 Déjà vu. That’s the experience many first-time guests describe having at Bala’s Bistro in Whitehaven. They’ve never been there before, but it all feels so perfectly familiar.

Inside Bala’s Bistro, everything from the decor to the food is bright and vibrant. Owner Bala Tounkara says some people find his dishes strange, but “culturally unique” feels more correct.

He beams with pride as he lists off his most popular options. The sizable menu features both West African soul food and American foods; you can order combos and even a la carte foods by the pound. Longtime top-sellers include plantain fufu (usually eaten by hand with a stew), egusi soup (with beef, chicken, smoked turkey, melon seed, and spinach), lamb saka saka (a stew filled with lamb, spinach, and onions), oxtails (in a rich tomato sauce with vegetables), and maafe (a peanut butter stew made with lamb, chicken, potatoes, carrots, and cabbage).

With so many foods that are unfamiliar to most Americans, Bala is adamant that customers “try before they buy” so they’ll have a full understanding of what they are selecting. This was particularly helpful when fufu was trending on TikTok, and the #fufuchallenge hashtag brought a slew of new customers.

In some ways, though, West African food is a natural fit for Memphis.

“Food in the South is similar to back home—a lot of rice and okra and a lot of fish,” says Bala.

“It made opening a restaurant an easy choice. I knew how to cook, and I know the food is good where I come from.”

Popular Southern dishes like jambalaya and gumbo find their roots in Africa. And two of the world’s most popular beverages—coffee and cola—originated in Africa. (The African kola nut is the key ingredient in many colas.) Through voluntary and involuntary trade and migrations, African food has made its mark on the world’s culinary evolution. Today it’s widely recognized as one of the world’s most influential food cultures.

Still, Bala has adjusted some of his traditional African recipes to keep up with local trends. For example, when customers came in asking for vegan foods, he developed an extensive vegan menu, working hard on the recipes so vegan customers could enjoy his traditional flavors. He’s also had to adjust his recipes to accommodate the fact that many American ingredients are sweeter and include artificial flavors.

Bala’s journey shows just what kind of love Memphis wraps a person into. He arrived in Memphis in 2003 to join family members who were already living here. His culinary odyssey began in the Tunica, Mississippi, casino circuit. He started as a dining room cook at Bally’s casino, eventually moving on to kitchens at Horseshoe and Harrah’s.

While working at Horseshoe, Bala became friends with two of Memphis’s favorite chefs, Kelly English and Jimmy Gentry. He met Kelly at N’Awlins restaurant in 2005. Kelly says that he and Bala developed their own way of communicating with each other that no one else understood.

“A plate of food can tell an entire story to someone about who you are without even saying a word,” says Kelly.

“Bala is the person that made me truly realize that not all of our history is contained in books. Someone decides what goes into books, but you can’t hide what goes into a pot.”

Jimmy made Bala his sous chef in 2007 when he opened Magnolia in the former N’Awlins space. He describes Bala as the person that relieved him of all of his worries when he was at work. Jimmy boasts about Bala’s excitement for the industry and the pride he shows in his craft.

“Even if you’ve never had African cuisine, you can learn by just being around Bala,” Jimmy says.

“A group of us went to eat in his restaurant, and we heard him explain what different items on the menu were to a customer. Not only did he explain the flavor, but also the cooking style and what it’s comparable to. To me, that’s selling who you are and also educating the client.”

Both Kelly and Jimmy believed in Bala’s dream to own his own restaurant. They helped him start the paperwork for his business license; they even supplied the tables you see in the bistro today.

Bala’s Bistro first opened on Raines Road, a place that was easy on the budget and allowed Balla to introduce his menu to Memphis. But when the chance came to relocate to a larger space in Whitehaven, Bala jumped for it.

“I love Whitehaven and have been living here since 2003, so it was an easy decision to open here,” he says.

“There is a large West African community here.”

Bala’s current location has plenty of room for him to grow. He stays busy catering events, is planning to expand his breakfast and brunch service, and even has his eye on a second concept. 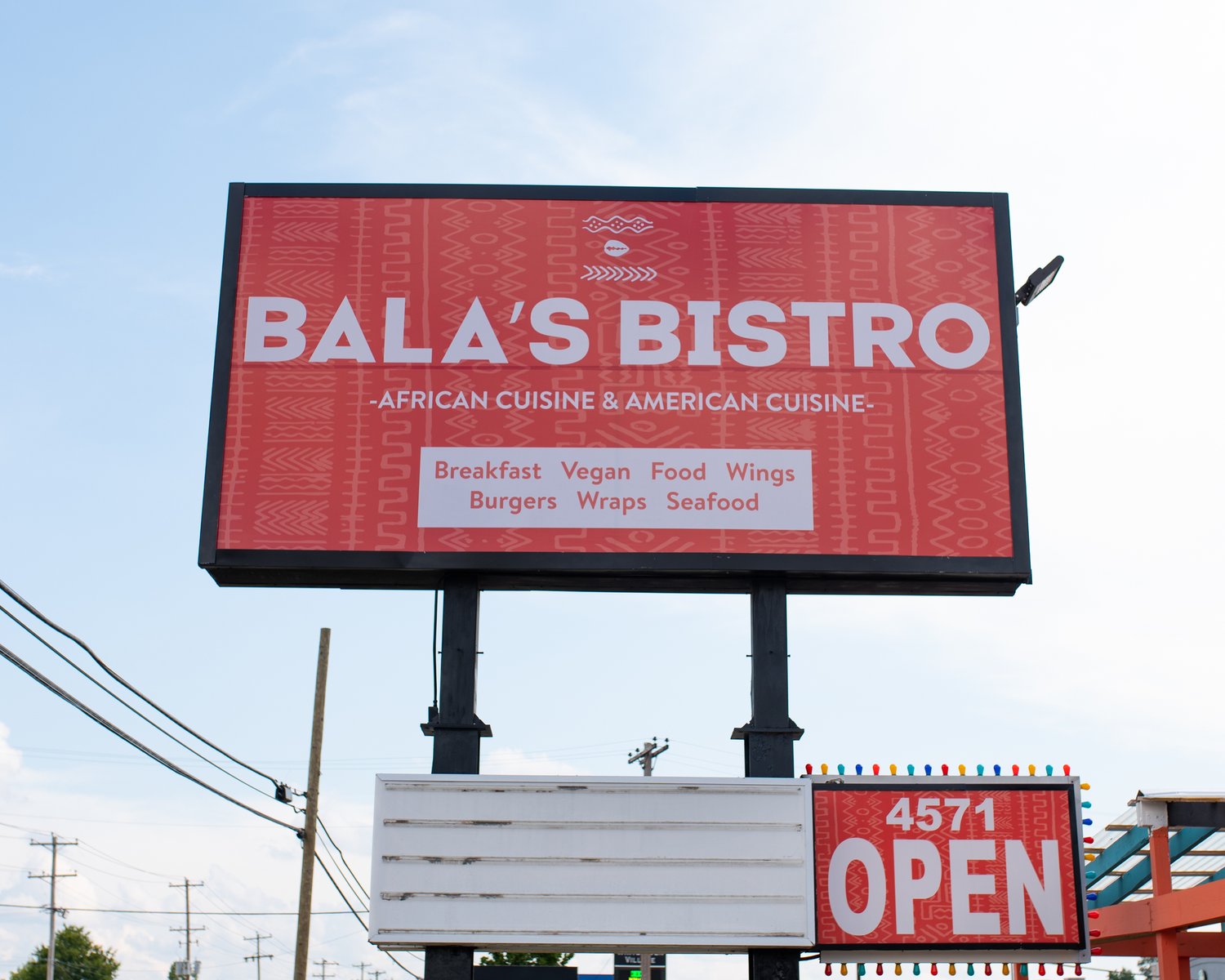 When Bala isn’t in the kitchen preparing dishes for customers or for family, including his young daughter, he enjoys spending time with the people of Memphis at festivals like Africa in April and Memphis in May.

And he welcomes Memphians to come visit him at his restaurant.

“Even though some of the food is strange to you, we would love for you to come and taste,” he says.

“We are willing to give you one taste of anything you want to try.”

Camille Patrice Fulton is an event integration advisor for ALSAC / St. Jude Children’s Research Hospital. A native of Memphis, Camille is passionate about sharing messages about the cultural vibrancy that make up this eclectic city. She hopes that her Instagram reviews inspire readers to experience Memphis differently. @camille.unlimited